Kaboom Chicken is a charming operation near Queen and Broadview. The word Kaboom is really just an access point, a simple word that rather than emphasizing Korean fried chicken as the specialty simply advertises the flavour bombs that go off in here.

It also ties in with the fast service, as you can stay in and dine out of quintessential red plastic baskets, or grab fried chicken to go. 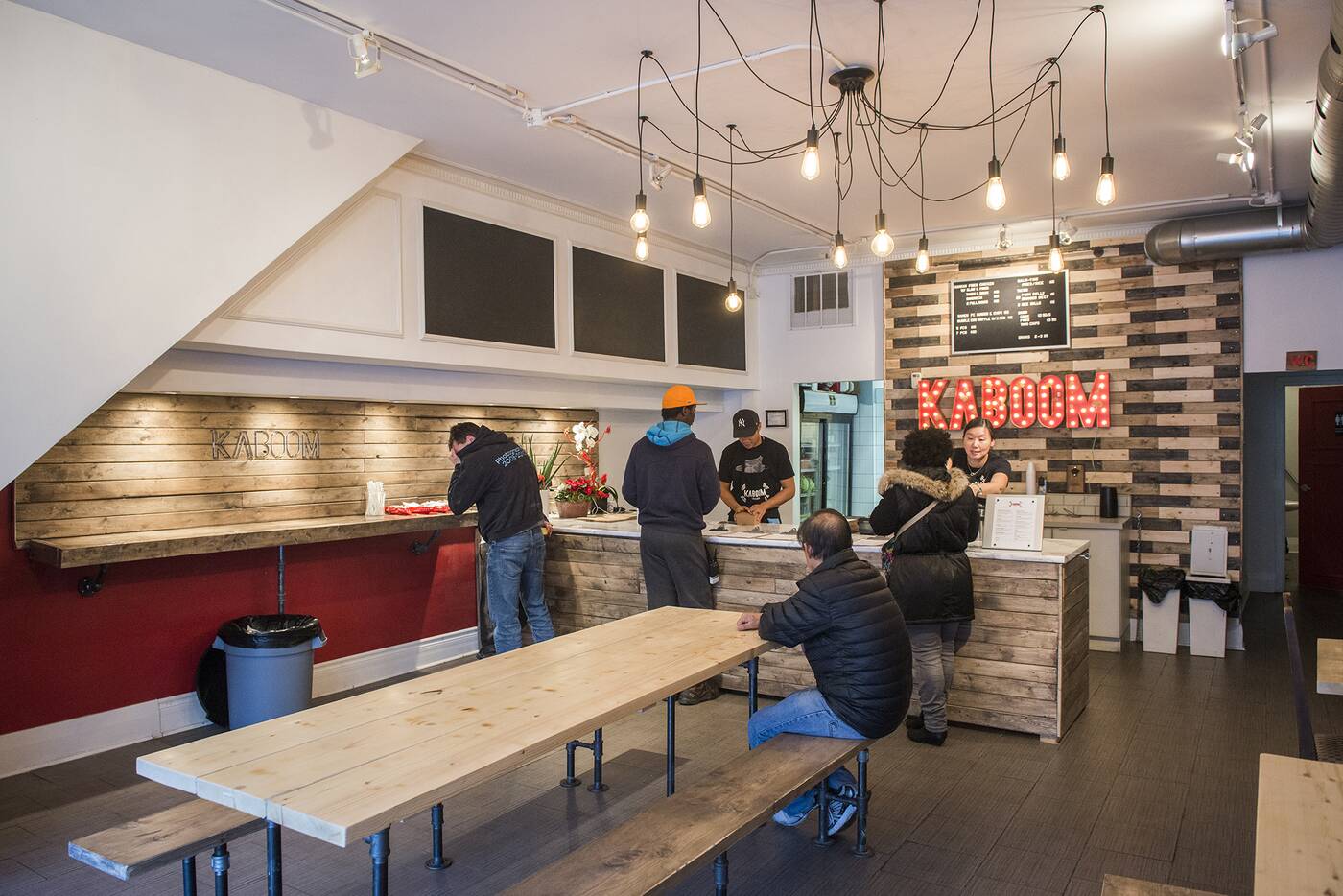 The interior is big and open, meaning there’s plenty of space for people to sit and line up during rushes. Built-in little hutches set into the walls create intimacy for less of a cafeteria vibe. 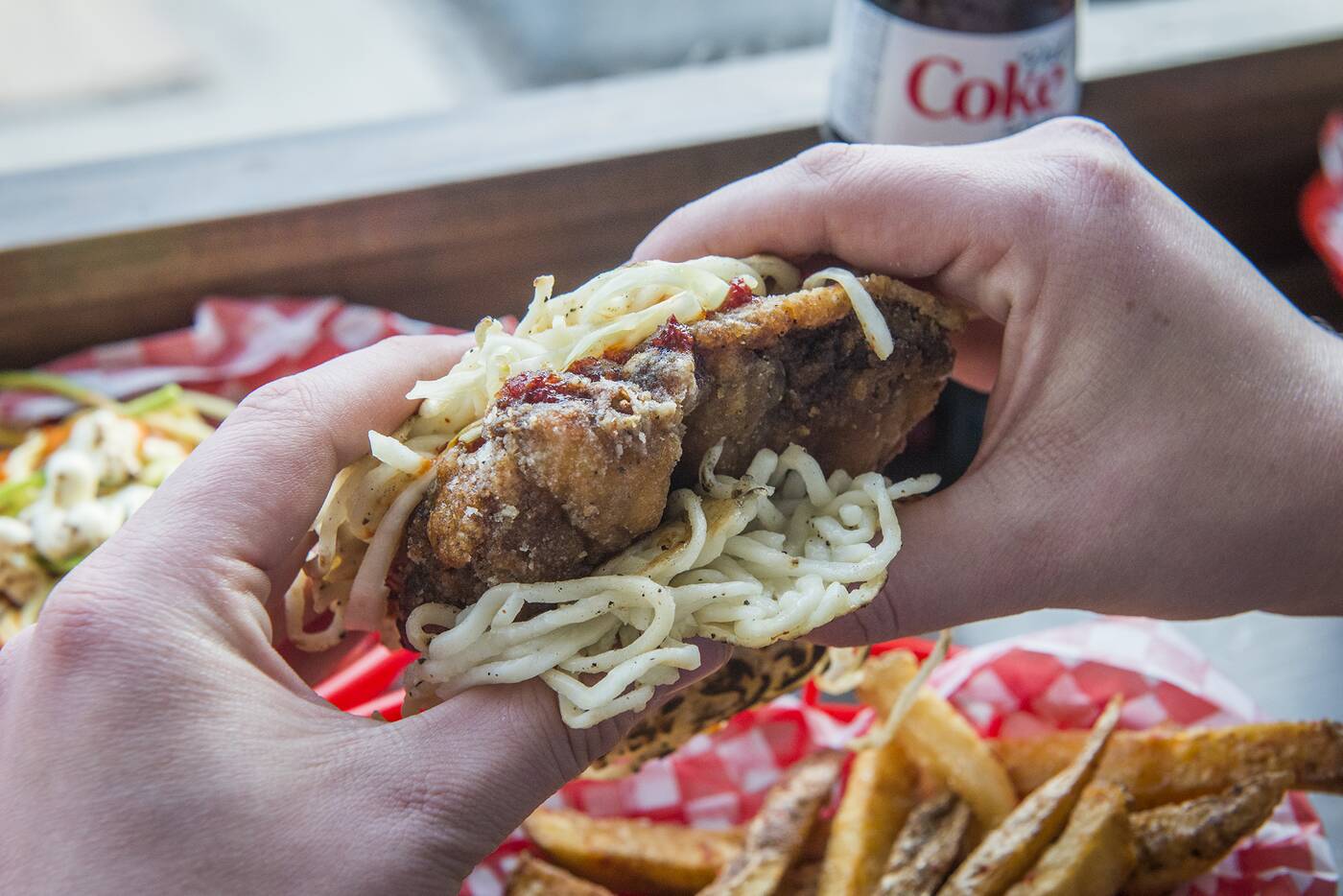 Kaboom started out at street fests like Taste of Lawrence, and the food here is primarily street-oriented. The ramen fried chicken “burger” ($13) would catch the eye at a busy fest. Their signature boneless thigh meat is sandwiched between ramen patties they make in house, fried to become slightly crispy.

It falls apart on you a bit, but I think that’s the fun of it, and this is definitely one of the more addictive dishes, easy to wolf down with no bones and tangy chicken combining comfortingly with starchy and familiar ramen.

On the side we get house cut fries sprinkled with a bit of appropriately Korean-tasting gochujang flakes, with gochujang mayo for dipping. 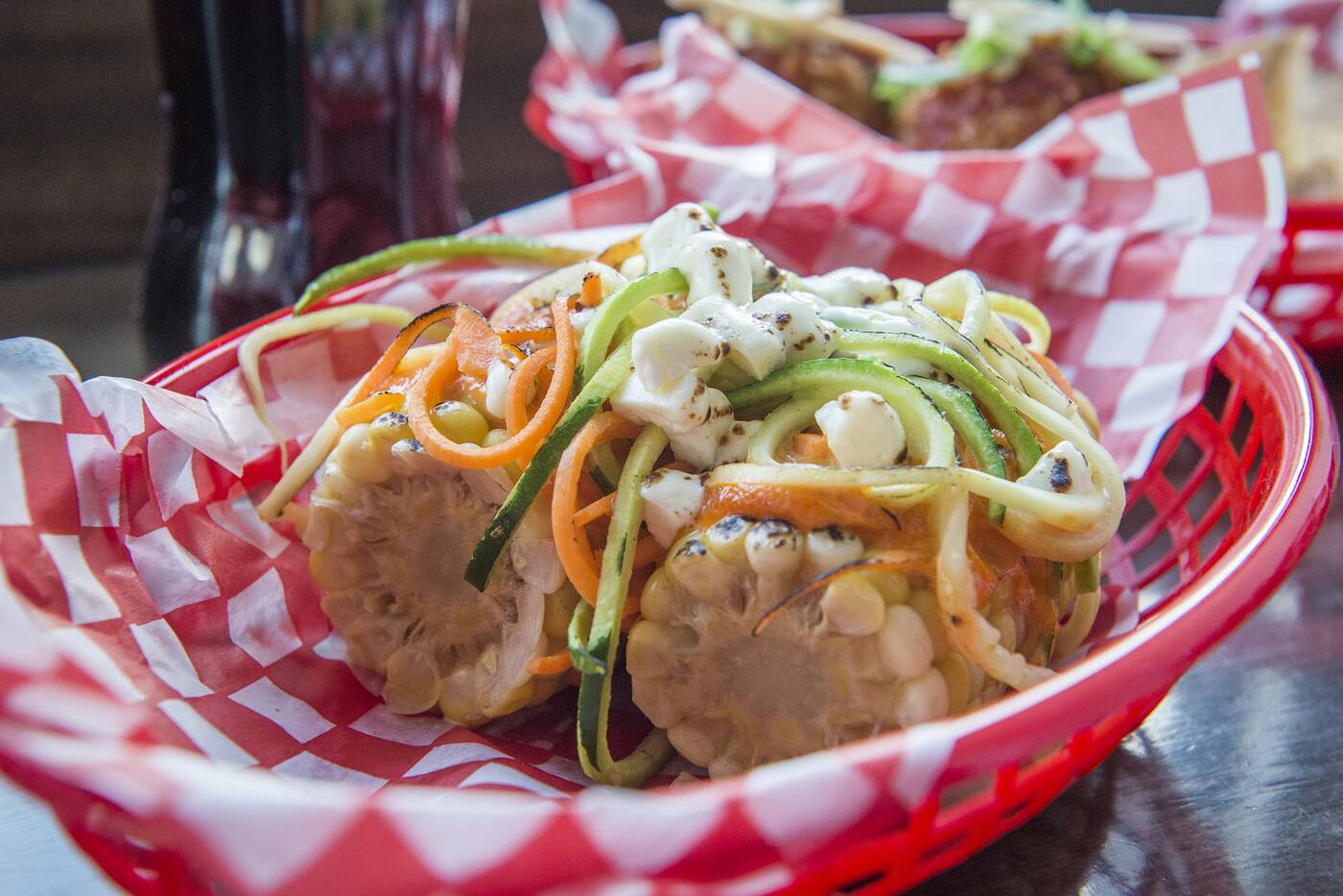 From a range of sides you can also choose more out-of-the-box corn on the cob ($3.50 - $5) that’s been topped with veg and feta then blowtorched for a smoky char, as well as taro chips. 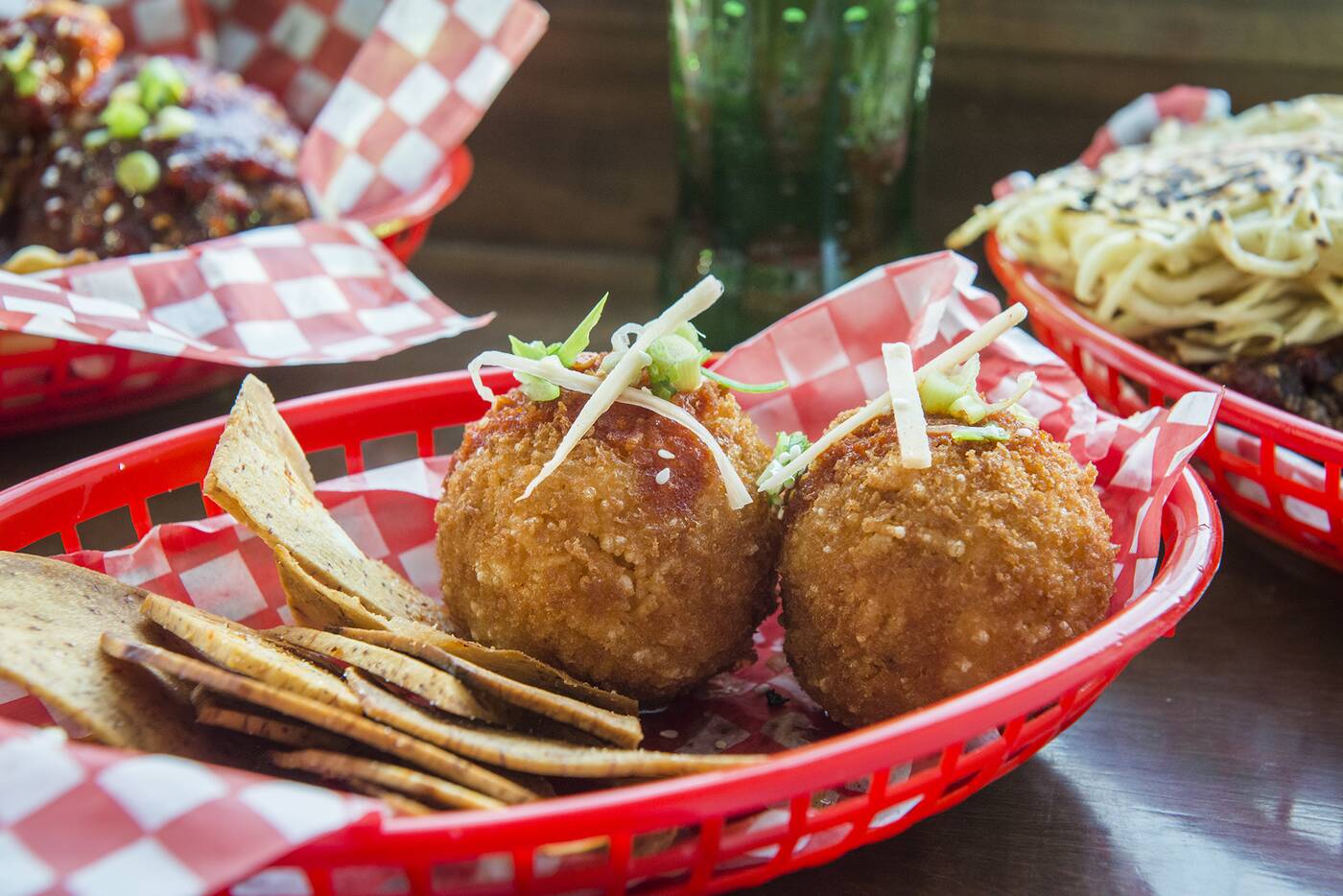 Authentic Korean rice balls come in an order of two for $5, kimchi and rice rolled into a panko-crusted ball. The name of the game at Kaboom is texture, and an interplay between soft and crunchy. Garlic, green onion and a gochujang sort of vinaigrette on top add tang and sharpness to offset the saltiness of the kimchi. 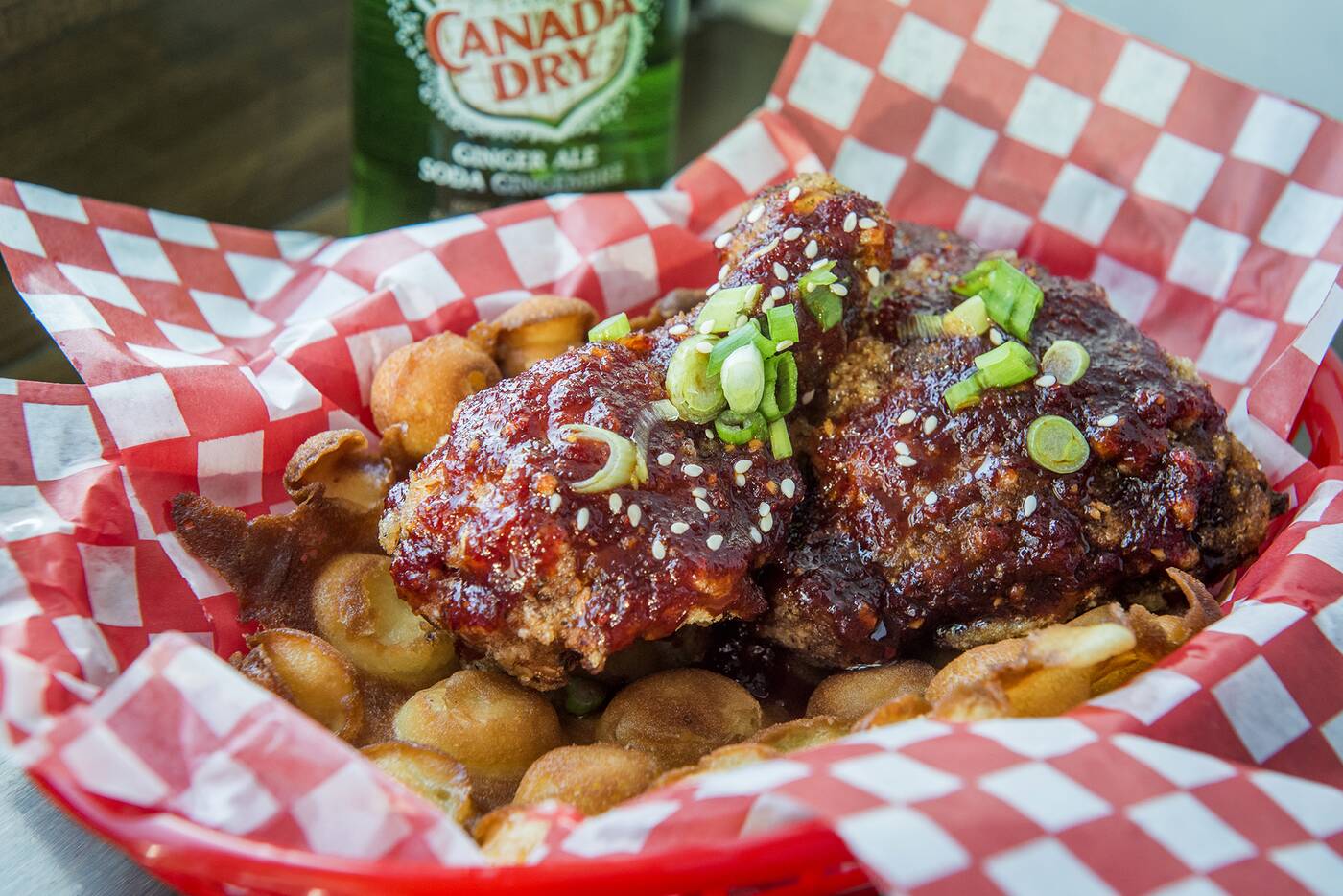 Their Korean fried chicken is the piece du resistance, and we grab it on a bubble egg waffle for $12. The chicken is glazed with what some apparently call “ Korean crack,” a sweet chili sauce that ties in well with the waffle that has actually been flash fried for extra sweetness and a texture more like a donut. 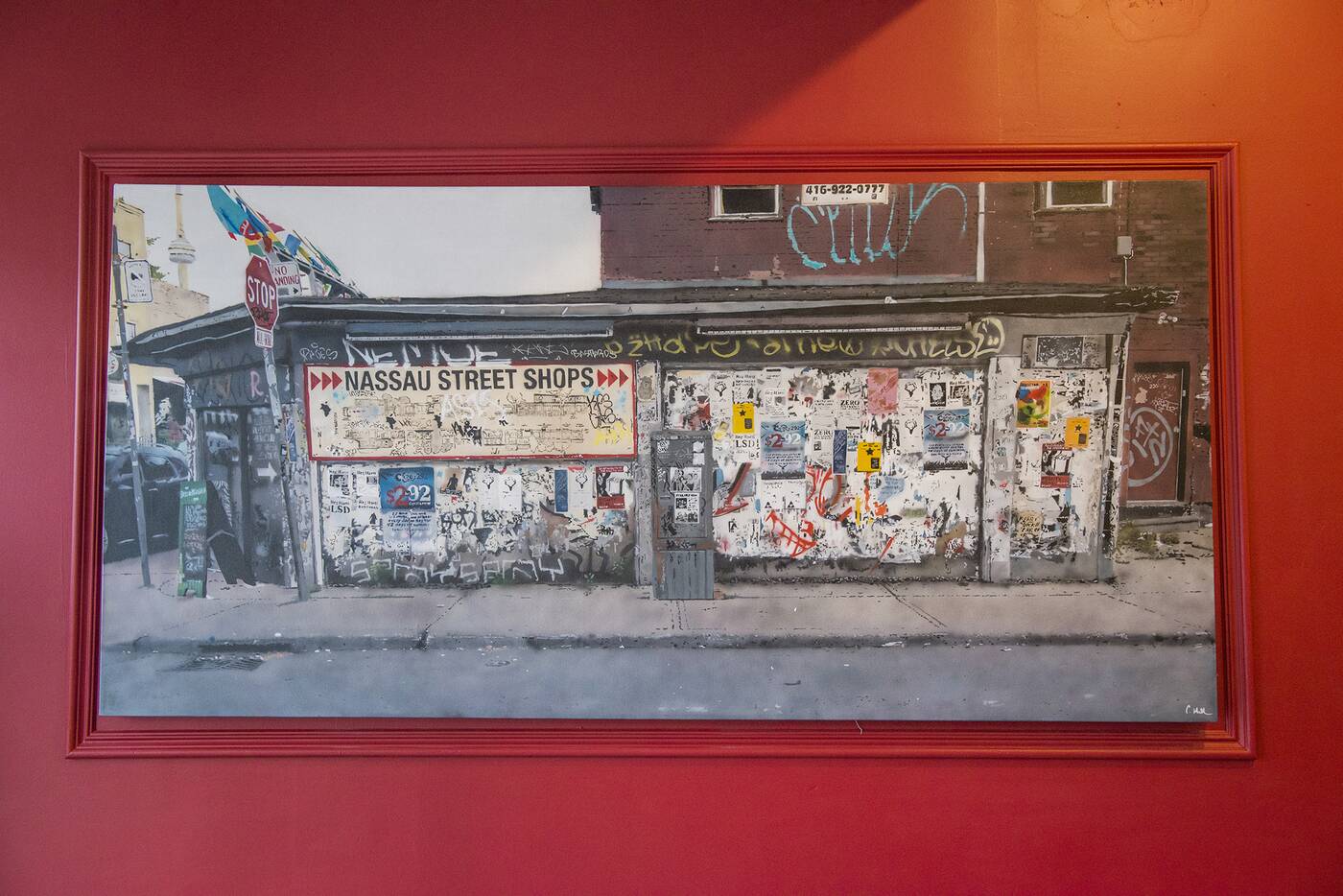 An artist friend of the owners has pieces that look spray-painted of Toronto streetscapes up for sale, adding a cool vibe. 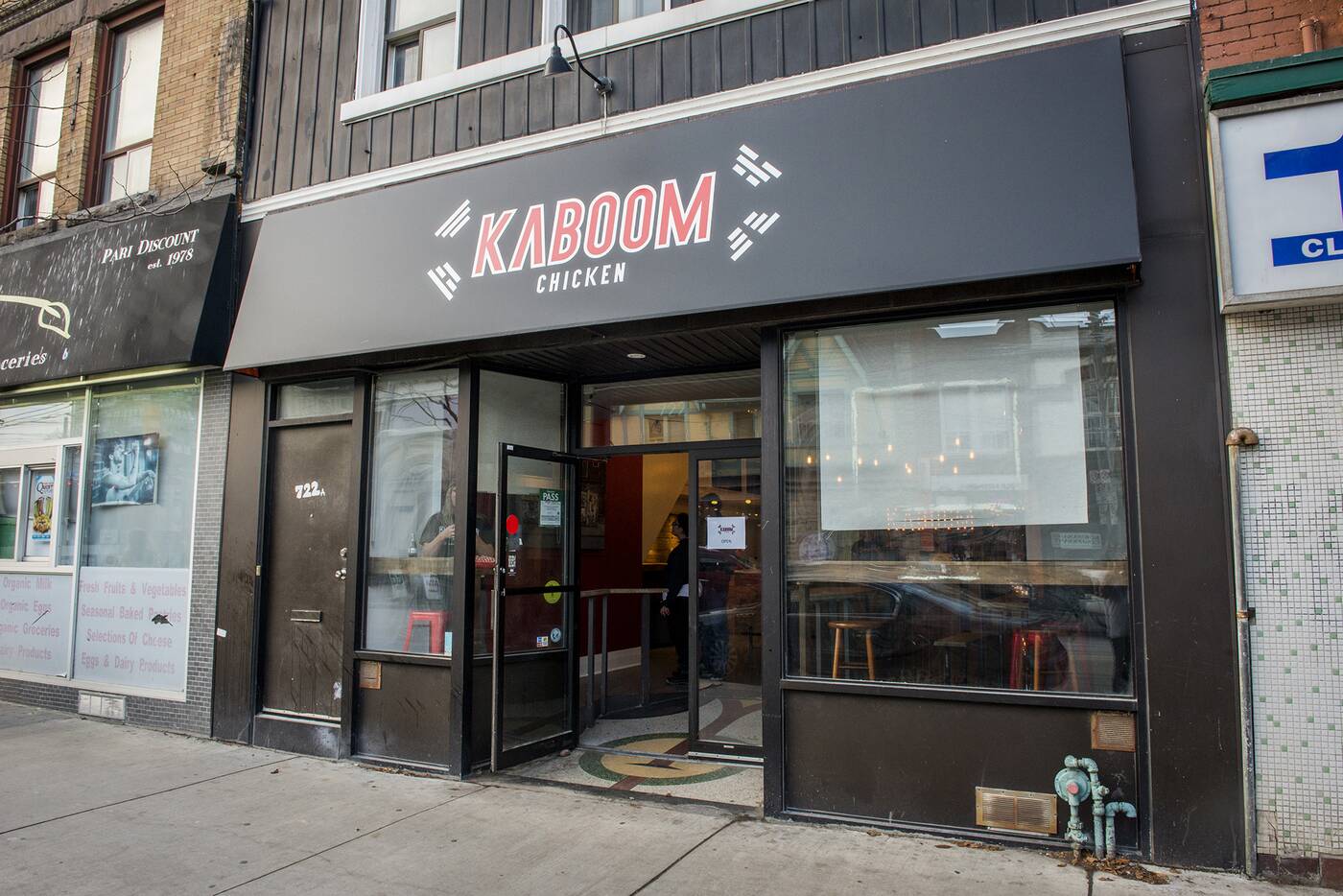