Johnny Jackson is a new, and rather unusual, entry onto Little Italy 's bar and restaurant scene. Open only on Fridays and Saturdays, they've clocked in just under a week of actual service over the last few weekends. Owner Rick Cowan has a long history of bar and nightclub management, but Johnny Jackson is a spot that better reflects his personal tastes. 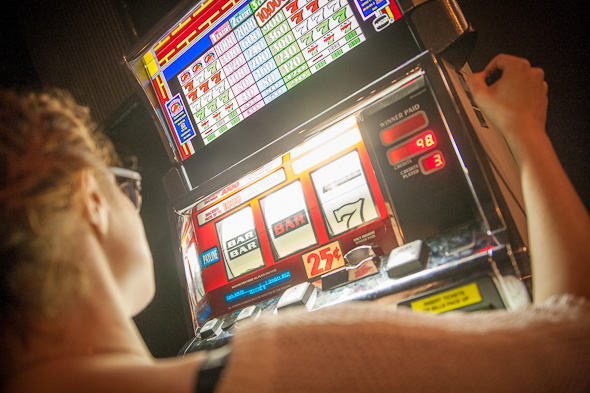 Sleek wood high-tables and stools make up the front of house, while lower, dimly-lit tables and built-in leather couches take up the middle. The back is the designated food area, with wooden tables and chairs, a secondary bar, and a slot machine--chips are free and available at the bar, and while there's no cash payout, you could win a burger. 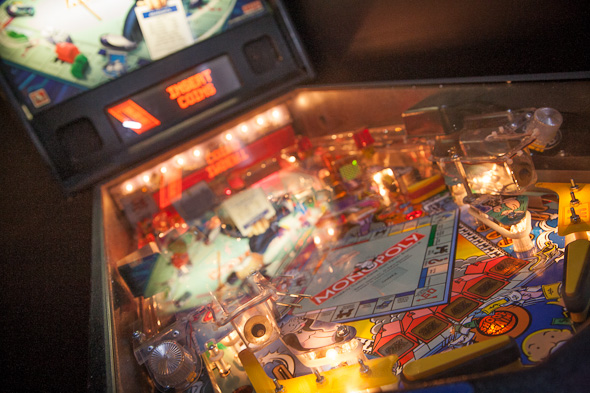 Cowan tells me that the place is in flux, with signage and seating still being added--the pinball in the men's washroom and the Ms. PacMan machine in the women's are just a few of his ingenious ideas, as are the garbage cans made out of hollowed-out drum sets. 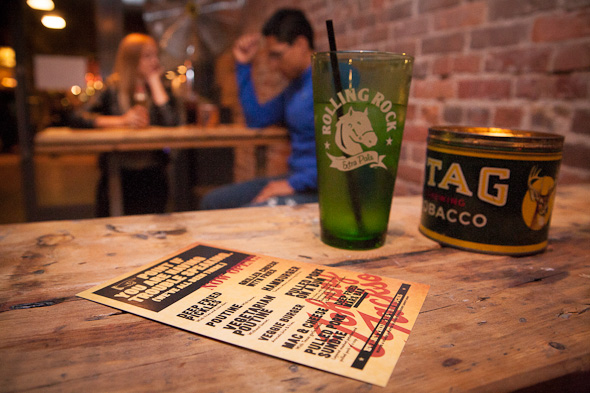 It's a bit of a slow start on Friday night, but when the place starts filling up, it's an eclectic mix of clientele--part high-heeled and tipsy, part plaid-shirted and bearded, and part black-leather-jacketed. The DJ struggles a bit with equalizing the volume, and our table ends up almost cheek to cheek in order to hear each other. 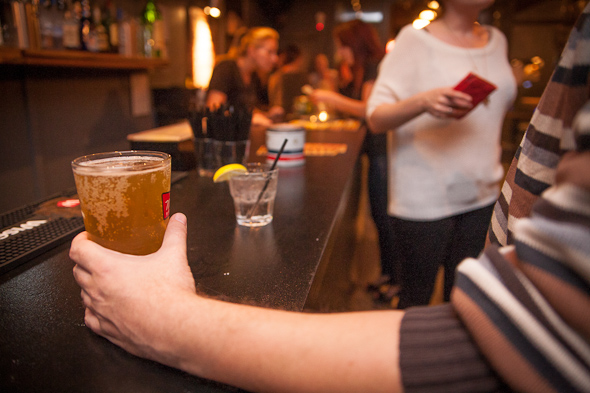 The price structure is simple--$10 for all food items, $6 for beer (among which Mill St. Organic is the only draught) and shots, and bar rails averaging around $6. The 10 dishes (including the pulled pork, which we didn't sample) arrive in cardboard take-out containers. Be forewarned: you won't find a single, legitimately healthy option among them. 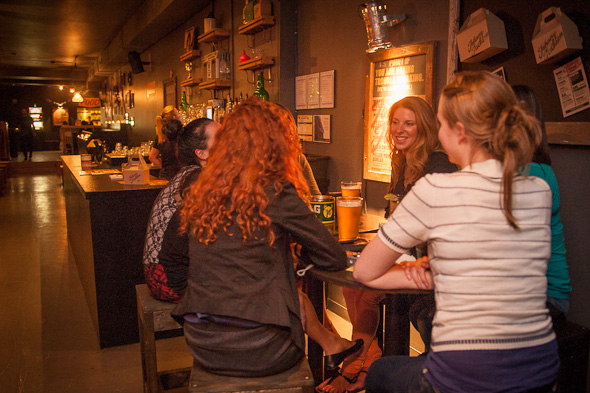 The menu is a stroke of genius, if hard to decipher at first. One side is all wit--dubbing the dishes Abe Frohman ( Ferris Bueller , anyone?) or Bourdain ( Anthony , that is)--while the other puts things plainly under the header of "point if you are having trouble speaking (we've all been there)." 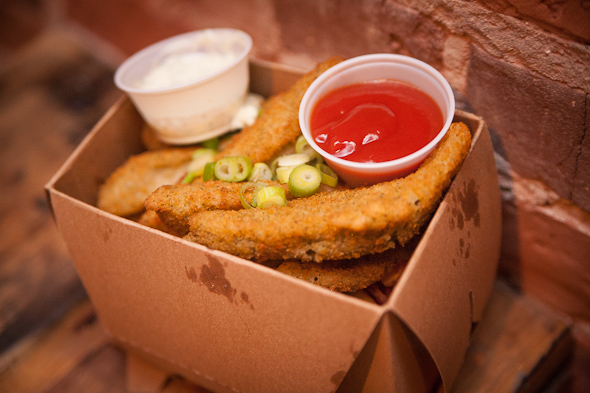 The deep-fried pickles are self-explanatory, arriving on a bed of fries and coleslaw, and with a dill dip. Not my favorite dish of the bunch, but the pickles are lip-puckering (although the batter is laid on a bit too thick). 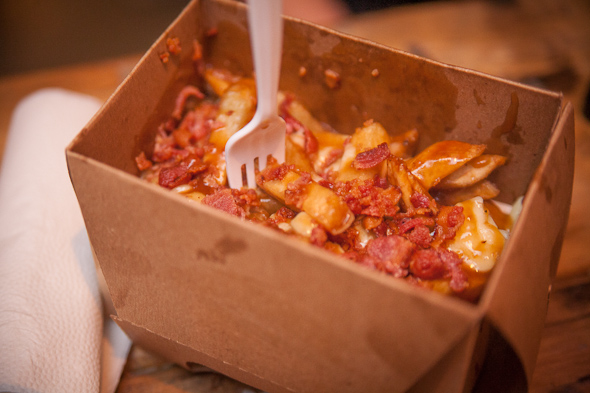 The poutine can be ordered either regular or vegetarian (with bacon and vegetarian gravy being the differentiating factors), and comes with copious amounts of cheese. What can I say about the dish, other than to advise that you spring for the bacon (if you're morally able to)? The centre-cut bacon, which can be found generously sprinkled atop many of Johnny's dishes, is so beautifully smoked that I wondered if it was done in-house (it's not, but I forgive them). 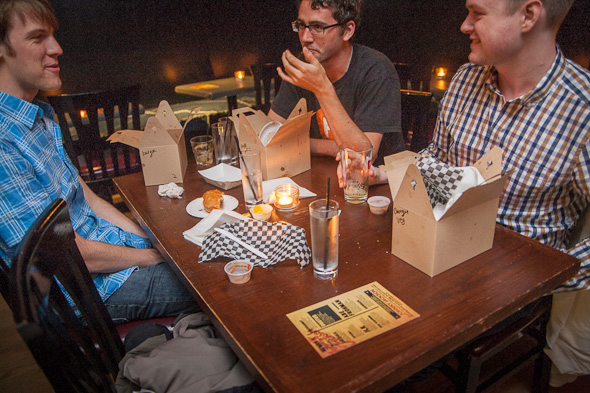 Next are the burgers, again available in either vegetarian or meat options. The 6 oz. Grade A patty is a solid one, topped with tomato, lettuce and an onion ring, and paired with fries. They're not skimping on the meat, and I'd happily crown any foodstuff with their onion rings. The vegetarian burger is something of a feat, in that I actually preferred it. It, too, is accompanied by fries and comes topped with the requisite veggies, but also with avocado slices and a surprisingly decadent brie. 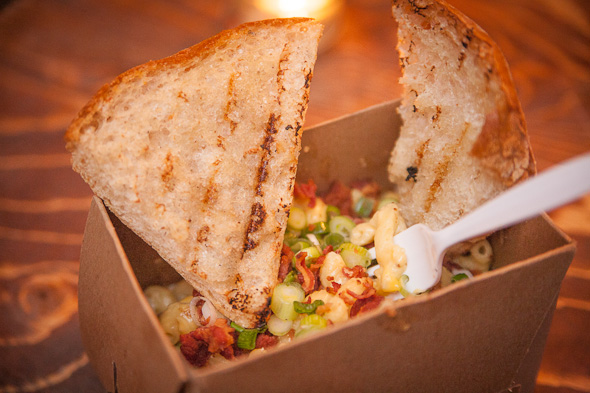 The mac and cheese, in my opinion, is one of the counterintuitively stand-out dishes. I'm a devoted disciple of the PC white cheddar, and have rarely found a restaurant mac 'n cheese to top it--until Johnny's. The green onions were too much for me, but the Texas garlic bread triangles made up for it. 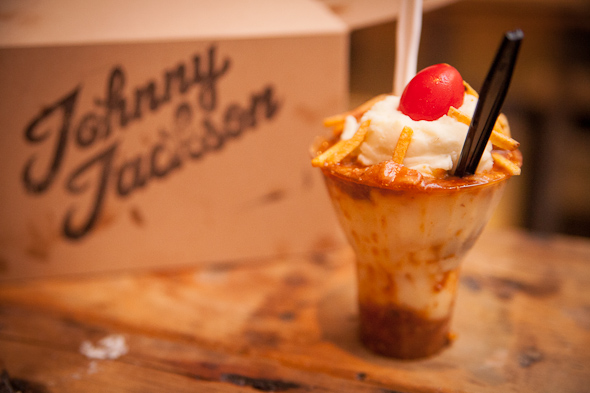 The pulled pork sundae is much as it sounds: mashed potatoes and pulled pork in a cup, with a cherry tomato filling in nicely for a cherry. It's a balanced dish, with the pulled pork kept moist by a sweet and smoky sauce, and the onion rings arriving with a honey sauce. 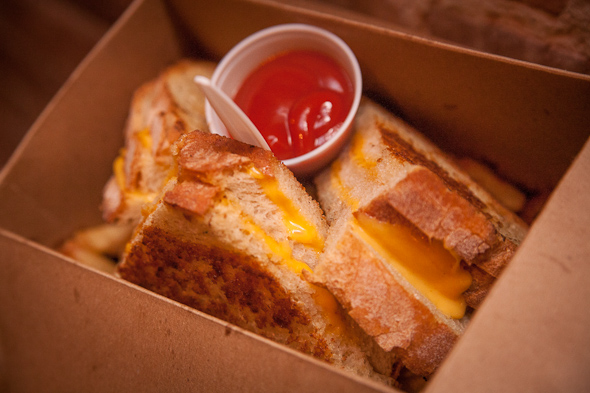 The grilled cheese is, among the plethora of waistband-busting foods, a bit underwhelming. I can imagine it being a comforting snack in the dead of winter, but for now, it's 3 halves of thick-cut Texas white bread and American cheddar. Worth $10? Probably not. Should it follow form with Toronto trends and pile on unusual cheeses and strangely-matched toppings ? Probably. 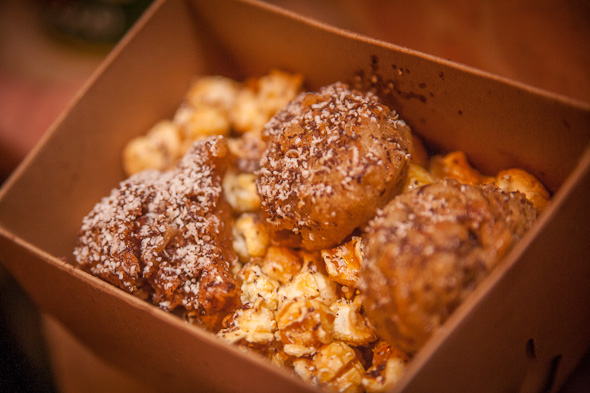 For dessert, there's the deep-fried Mars bar. Despite my shameful passion for fried foods, I've gone 26 years without sampling this particular brand of artery-clogger. Open up the box, and you'll find 3 chunks of Mars bar coated in tempura batter, that resemble chicken nuggets. Typically, the dish comes with home-made cashew brittle, but on this occasion, it's a delectable blend of grated dark and white chocolate. I didn't love it, through no fault of Johnny's--there was something about the caramel and tempura that didn't sit well. However, the boxful of caramel popcorn was addictive, and I'd almost recommend the dish for that alone. 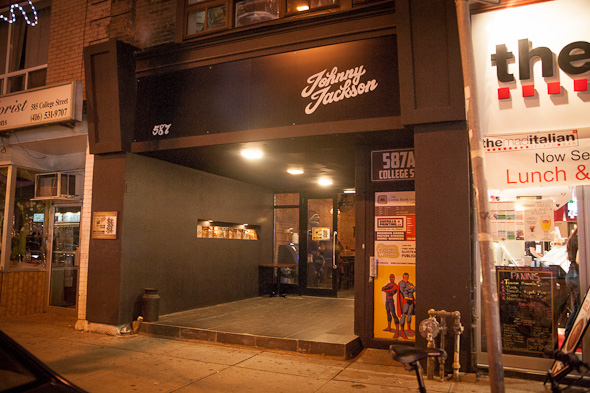 Wondering who, exactly, is Johnny Jackson? Cowan hopes it's the framed photograph of an Italian race car driver, his face obscured by a frothy burst of champagne, or perhaps the incredible photograph of his grandfather at the Playboy club--he's meant to be a discerning everyman. But who he actually is, and consequently, what the space ultimately ends up being known for--its DJ nights, its solid food, or its bar atmosphere--remains to be seen.