With the departure of Susur to NYC , Toronto's newest Top Chef may just be Jamie Kennedy . Although known best for his eponymous Wine Bar and now drawing curious locavores down the odd alley-like Gilead Lane to the cafe of the same name, the seemingly most traditional restaurant in Chef Kennedy's triumvirate is found within the Gardiner Museum .

But along with the choice location - mere steps from the Museum subway stop - comes the limitations of being in a museum: except for Fridays, the place isn't open during dinner hours. This doesn't stop Chef Kennedy and his assembled team; they serve lunch reminiscent of the wine bar seven days a week and do a prixe fixe menu each Friday, with seatings from 6-8:30pm only.

But it works. Very well. 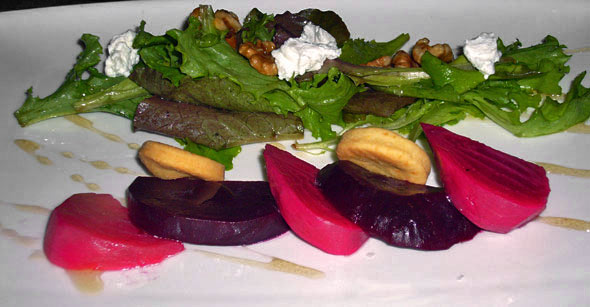 I found myself at the museum on an otherwise quiet and chilled Friday night for the half price admission, and my companion and I decided dinner in the museum after seeing the exhibits would make a perfect combo. Each week's menu gets its inspiration from a different country; our featured foreign locale was The Netherlands.

The straight-forward menu (see below) makes it easy: 3 courses, 3 choices per course, one price. It also immediately brought back memories of beer cafes in Amsterdam when Bitterballen appeared at the top of the appetizer list. I couldn't resist the somewhat whimsical take on this Dutch pub food staple; my prediction that this version would be refined pub grub was met and exceeded. The perfectly crispy-on-the-outside, tender-on-the-inside meatballs, veal in this case, were succulently divine, and the creamy sauce turned these meatballs into something decadent. And you won't find fried capers with your bitterballen in Holland.

Kennedy's commitment to locally-sourced and organic ingredients really shone in the beet salad starter. The earthy sweetness coming from the beets showcased why they deserved to be plated separate from the greens. And the crispy gouda cakes were sublime, inconspicuously Dutch-ifying the salad.

Although he lends his name to it, don't expect to find Jamie Kennedy at his restaurant very often. Chef Scott Vivian more than capably applies Kennedy's aesthetic to his menu creations, and is also surrounded by attentive and intuitive front of the house staff. When my companion ordered the vegetarian starter and the fish main, he correctly sensed a preference for no (land-based) meat. He inquired about the extent of vegetarian preference, and somewhat mysteriously said he'd talk to the chef about avoiding any meat.

What we figured out shortly after was that the amuse bouche to start us off was a perfectly balanced pork terrine - alternatively called a headcheese - and so the chef worked up a potato dumpling stuffed with sheep cream and chives. The server's intuition was more than a little bit appreciated.

It's also worth noting, for non-fish-eating vegetarians, the chef will concoct a vegetarian main dish; we heard somebody at a nearby table request this, although it might be helpful to mention dietary restrictions while making a reservation.

Back to the food. For the main dish I struggled briefly with the decision to have rabbit or duck. Although I'm usually a sucker for a perfectly-rare duck breast, I couldn't resist the rabbit, something I don't get as often but also the more interesting sounding that night, accompanied with leek risotto and a Madeira sauce. The surprise mini chestnuts were an added treat, and I don't think I've ever enjoyed brussel sprouts as much as I did that night. I was assured the duck was delicious, but the braised rabbit really showcased the chef's talent for combining seasonal ingredients. By the time my plate was clean, I was one stuffed but happy diner.

As good as the rabbit was, though, I remember my taste of the black cod even better. Although the least local of the main dishes - it was brought in from the Pacific (my rabbit was Ontario, the duck Quebecois) - its freshness and intense flavour won my companion and I over. The potato puree was like cream, and the creamed spinach was about as elegant a creamed spinach you'll ever have. Hard to go wrong.

Perhaps most delightful was dessert, admittedly, the part I was least looking forward to. I'm not a dessert guy, and none of the night's offerings were really grabbing me. Fortunately our superb server talked us through the chocolate cake and convinced us it was really something. He correctly pointed out that the coffee flavour is what really came through (the menu made it seem the mint would), which was quite perfectly balanced with a hint of mint. The coffee Anglaise just put it over the top and for the first time in my life, I found myself wanting to finish the chocolate cake instead of the apple tart (which, by the way, was exactly how all apple tarts should taste, it's just that, well, it was still just an apple tart). 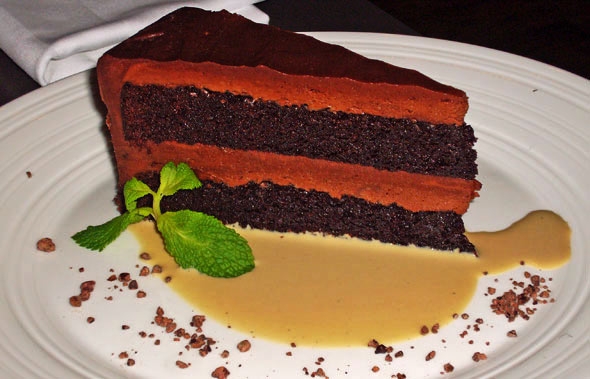 Borrowing a page from the Wine Bar, each menu item has a suggested wine pairing, available in several size pours to accommodate budget and tolerance. Beverages aren't included in the prixe fixe, and often bump the dinner tab considerably upward. But it's an all-VQA wine list and it isn't just filled with the Hillebrands, Jackson-Triggs, or other usual suspects of the province. Great care is obviously taken to showcase smaller or lesser-known vineyards, but ones producing some superb wines.

My Malivoire Courtney Gamay was one of the smoothest wines I've had in a while, complementing the Bitterballen perfectly, and the Fielding Meritage was big and bold, but not overpowering. Neither were wines I'd had before, and both served as good reminders that there is a lot more Ontario wine out there than the typical household names, and that some of it is awfully darn good.

Museum admission is not required to dine at the restaurant, although I recommend paying the Gardiner a visit before sitting down to eat. If you're looking for Kennedy's signature frites or a quick bite, you'll have to head in for lunch. For dinner, although not a cheap night - by the time you're done having some wine and tax and tip are added expect $100/person - I walked away completely stuffed, very happy, and not feeling the least bit like it was an overpriced dinner.

Publish at Scribd or explore others: