The Ice Cream Junction is a throwback to the Fifties found in, well... the Junction of course. Situated on Dundas at Clendenan, the ICJ has a near monopoly over the ice cream trade in the neighbourhood with the only other major contender being Delight down the street.

The ICJ models itself on the ice cream shoppes (yes...that's with two p's and an e) of yore. The decor is a little overwhelmingly pastel. The walls are a Pepto-Bismol pink that had mey craving primary colours, but really, it's only fitting. Seating is limited - they have three retro black and chrome tables, and a bench outside - but that doesn't seem to be a problem as most customers opt for take-out. 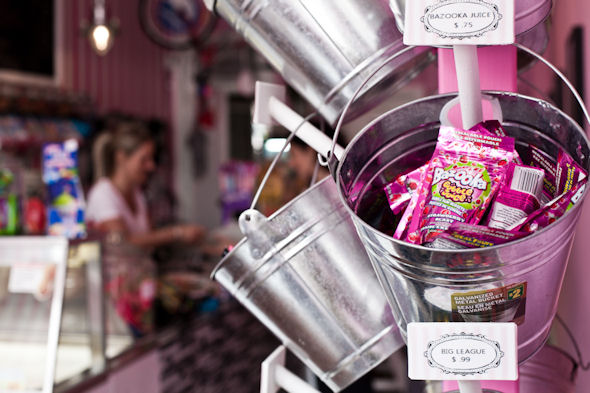 There are 36 Kawartha Dairy flavours to choose from, and they make all of their own waffle cones, some of which come adorned with cookie crumbs, dotted with sprinkles or circumnavigated by gummy bears. Prices are pretty comparable to other ice cream joints around the city (a single scoop in a regular cone costs $2.95 and $3.95 for the same in a waffle cone), but the scoops are doled out generously. For nostalgia buffs, the ICJ offers milkshakes, made the old-fashioned way of course ($4.25), and Root Beer floats ($4.35). And for small appetites (or budgets), they serve up the "Itty Bitty" cone for a mere $0.75.

After some contemplation, I went with a scoop of Banana Boat (top photo). My original choice was plain banana, but apparently banana becomes even more delicious when you put it in a boat. With swirls of chocolate and marshmallow it's reminiscent of the traditional foil-wrapped campfire treat.

I was going to house my choice in one of their waffle cones, until something caught my eye. That something was a chocolate chip cookie cone. Yes, it's a cone and a cookie. What a fantastically delicious split-personality. These cones aren't made by the ICJ but I wouldn't hold that against them. They don't get soggy, and there isn't a hole in the bottom like you find in waffle cones...so no leakage! 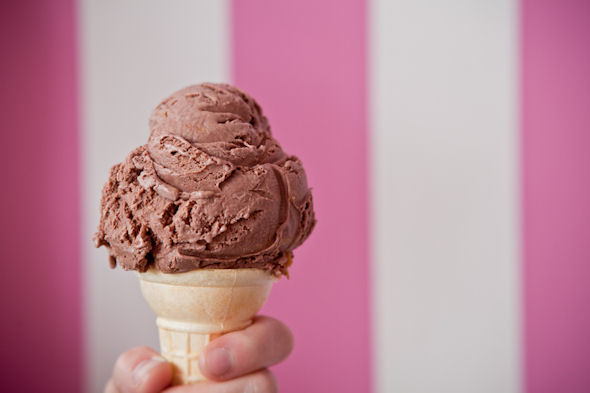 My friend opted for Chocolate Peanut Butter, that consisted of rich chocolate punctuated with peanut butter cookie dough pieces. Needless to say we were both pleased with our choices. 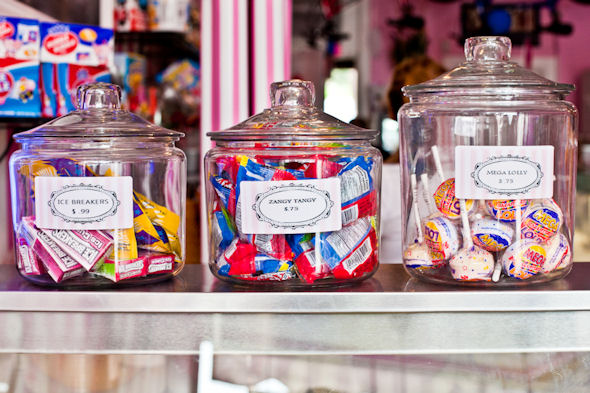 Still in the mood for sugar after an ice cream fix? ICJ has got it covered. Throughout the store, jars are filled with candy in a Willy Wonka fashion. Rock candy, Blow Pops and chocolate cigarettes, just to name a few, lure both young and old into making impulse purchases.

Just a heads up that all ice cream here comes served with a side of children. The store is geared towards kids (rightfully so!) and they come in droves. The owners have even put a step-stool in front of the freezers so those on the shorter side can get right up to the glass for a better view. Another nice touch is a container of baby wipes put out for messy faces, and I saw more than one parent gratefully help themselves to aid in the aftermath that is a double scoop of Blue Bubblegum. 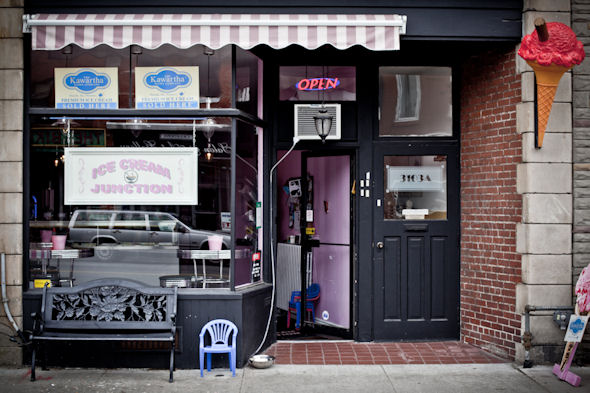