Hue's Kitchen is the kind of place I used to love, back when I had just started hanging out in Toronto, and still thought that Yonge and Bloor was the city's epicenter of cool. In those days, Sam the Record Man was the place to go for music, the Village was a great spot (for me, a straight girl) to meet guys, the corner of Yonge and Dundas was under perennial construction, and places like Ginger and Spring Rolls represented the exotic and delicious world of southeast Asian cuisine. Years ago, when Hue's was a full service restaurant, and called Saigon Sister, a waitress told me that Woody Harrelson had just hosted his TIFF party there. So cool!

Flash forward 11 years into the future - four spent in Asia, the rest frequenting pho joints on Spadina and Ossington - and my tastes have grown a little more particular. I still eat at quick-service Ginger from time to time, and while I recognize it's not the best Southeast Asian food the city has to offer, it'll do in a pinch. Hue's Kitchen, across the street from the Yonge/Bloor location of Ginger, is pretty much the same deal, but with slightly smaller portions and better dĂŠcor. 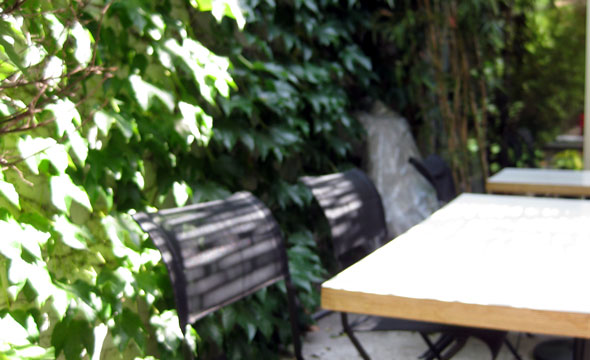 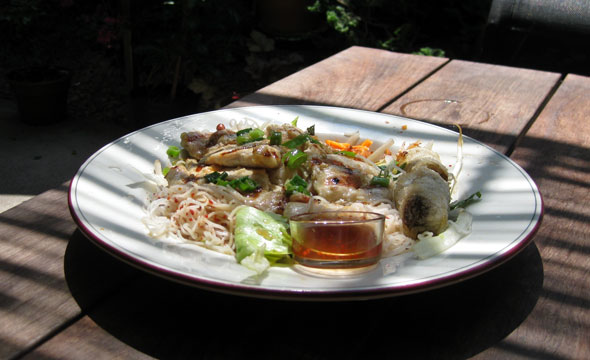 I ate at Hue's twice last week, ordering the vermicelli chicken with salad and spring rolls and the mango salad and avocado-crab fresh roll respectively. The fact that the vermicelli chicken bowl was listed in the "Authentic" category of the menu really appealed to my culinary snobbery. Unfortunately, the flavours did not. Soaked in a superfluity of flavourless sauce, this vermicelli had the right composition (noodles carrots, bean sprouts, mint and a side of spring rolls), but was missing the fishy zing of a genuinely tasty Vietnamese vermicelli. Plus, it had WAY too much sauce.

The mango salad was better, with mangoes neither too green nor too ripe; the fruit riding that fine balance between sweet/soft and tangy/crunchy. Topped with peanuts and crisp sesame-rice crackers, this mild salad benefited well from a hefty dose of self-administered Sriracha sauce.

Mushy avocado and crab rolls were less impressive: the avocado was browning, the iceberg lettuce was wilty, and the hoisin/peanut dipping sauce, tasting like it came straight from the bottle, won top prize for freshest ingredient. 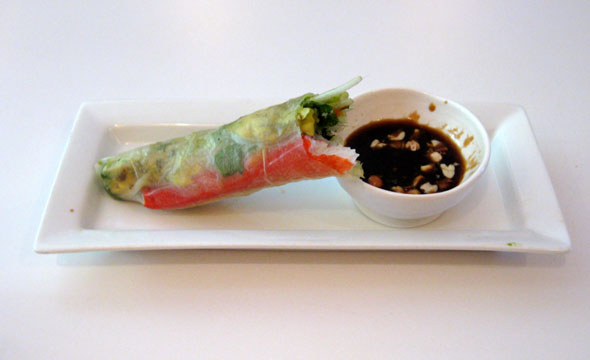 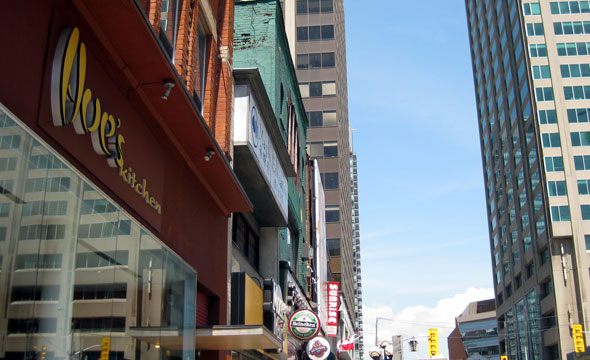 Pho Hung , Pho Tien Thanh or Golden Turtle , but it compares more or less equally with Ginger . Although underwhelmed by my meals, I appreciate Hue's Kitchen for what it is: a quick, no-hassle spot to grab a cheap and moderately healthy meal. It also gets bonus points for atmosphere, and the sunny back patio, a lovely place to sit and daydream about days gone by....