Henry's is a haven for rare international and local wines operating as a bar, restaurant and soon to be bottle shop.

The three-in-one concept was inspired by its popularity in such places like France and Italy, where people can shop for bottles and then have a glass of of it with dinner at a nearby restaurant. 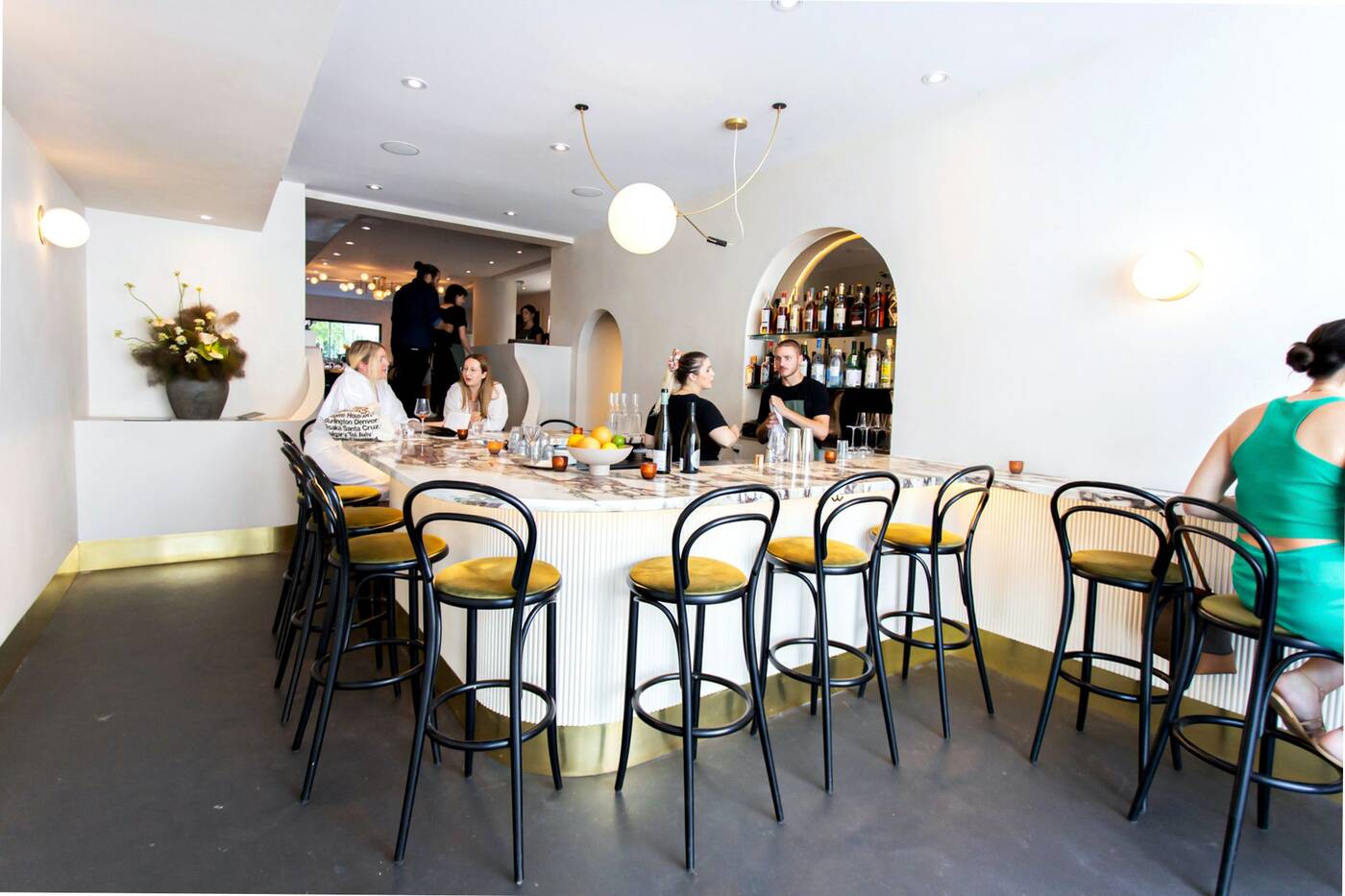 Owners Ben and Roxanne Hodson, and Guillermo Leal opened Henry's with the goal of promoting wine education while also offering a food menu that pairs with particular strains served here.

Each person in this trio brings their own talents to the table - Roxanne heads her own event company called Proper Plan. Guillermo has worked in Toronto restaurants for the last 10 years, now executive chef at Henry's. 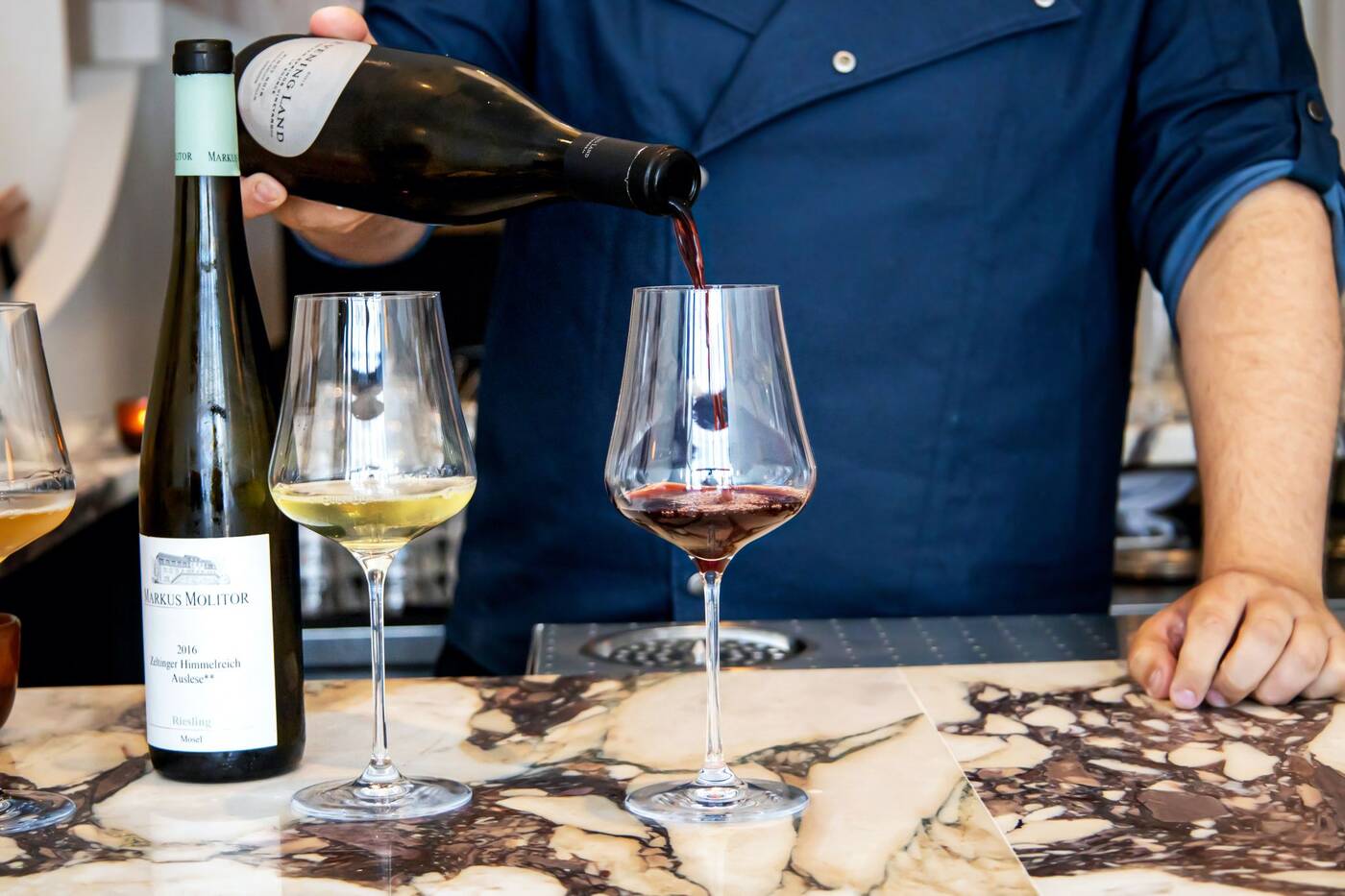 Ben brings the wine expertise, since 2022 he's engulfed himself in the industry both personally and professionally, leading his own wine distribution company called Brix and Mortar since 2016. 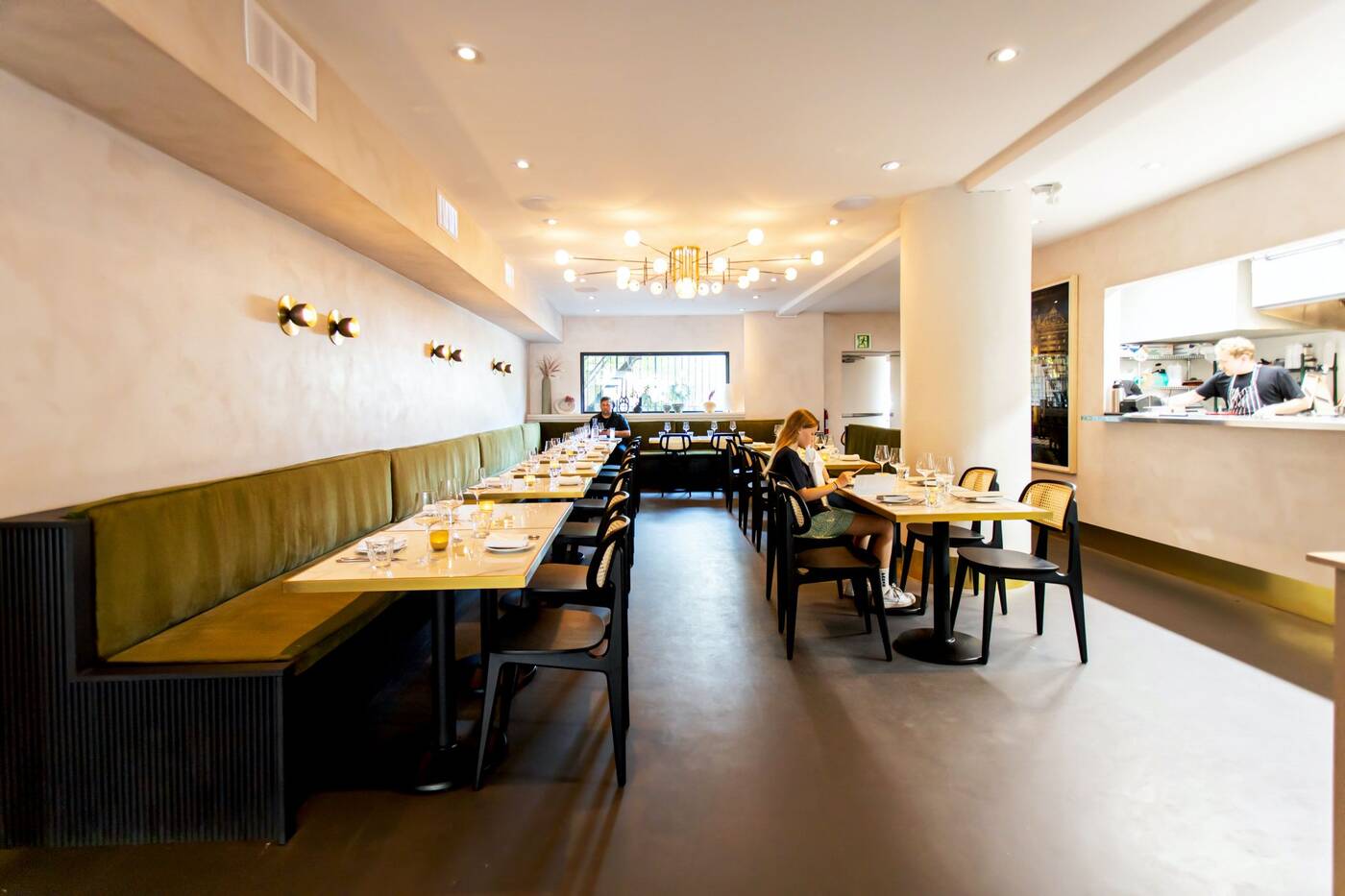 It makes sense that this bright, airy, neutral space holds some of the last remaining bottles of unique wines across Europe and Canada. 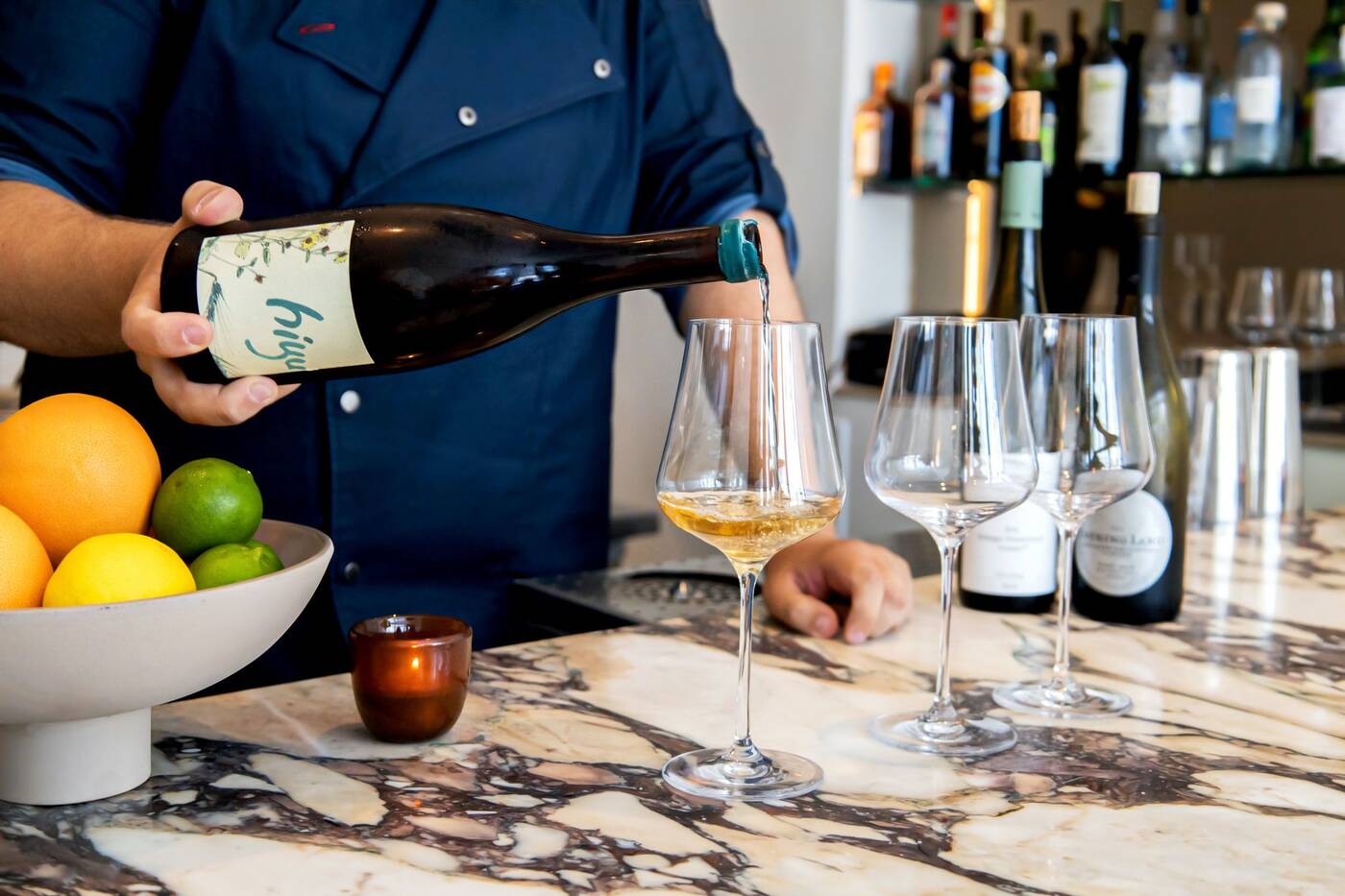 For example, there are just five bottles of the  Hiyu Wine Farm Falcon Box (2016) left in Canada and Henry's in Toronto has them for you to try.

This is the type of wine that pairs well with anything, it's crisp in taste upon the first sip but gets more dynamic as flavours of citrus start to get introduced to the palate. 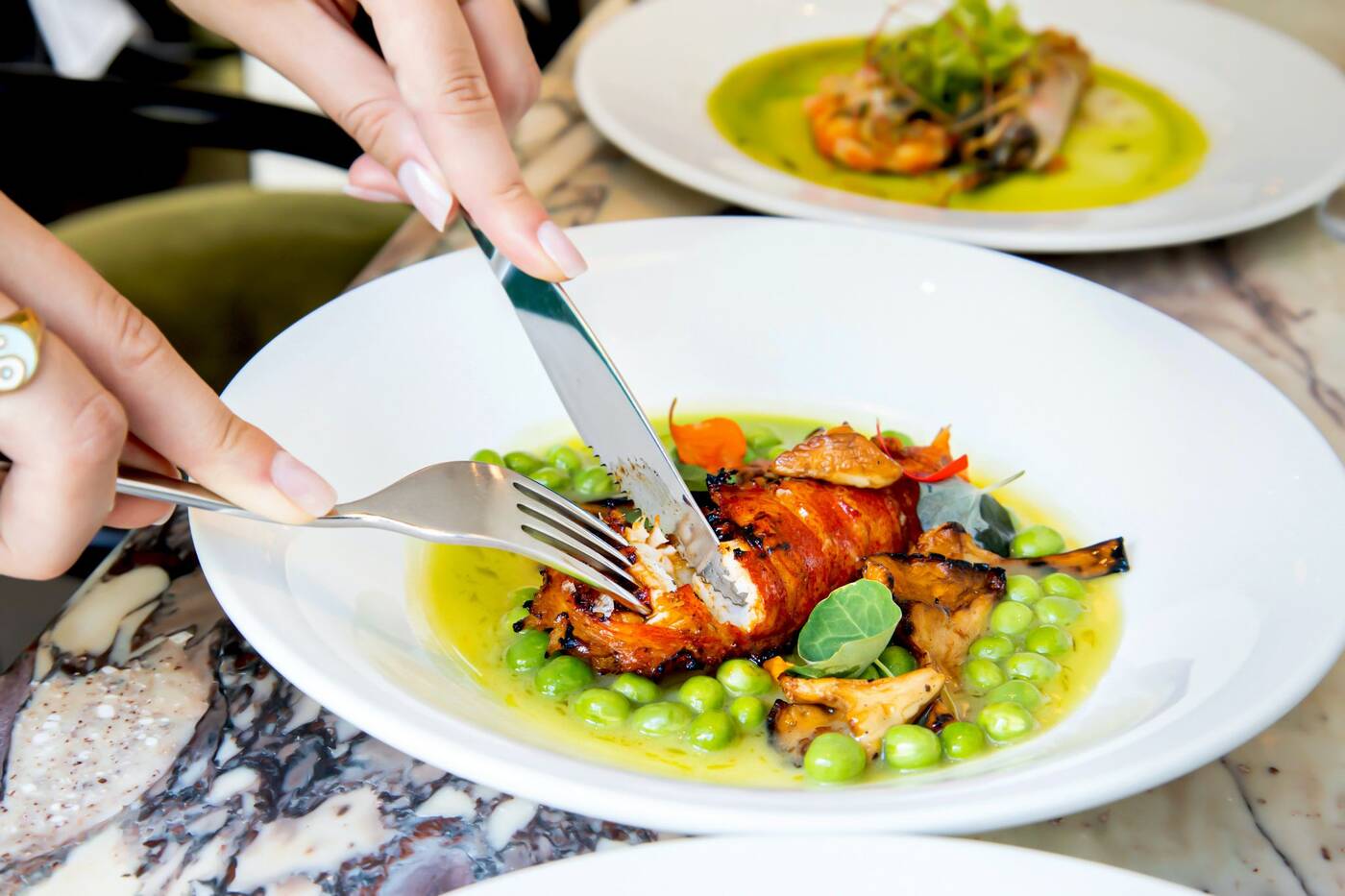 I found the Hiyu wine paired nicely with a seafood dish, specifically the East Coast Lobster ($48.00).  It's embedded in a warm sauce made of peas and golden, buttery chanterelle mushrooms.

Softness of the peas and mushrooms gave this dish nice balance with a touch of crunch on the lobster. 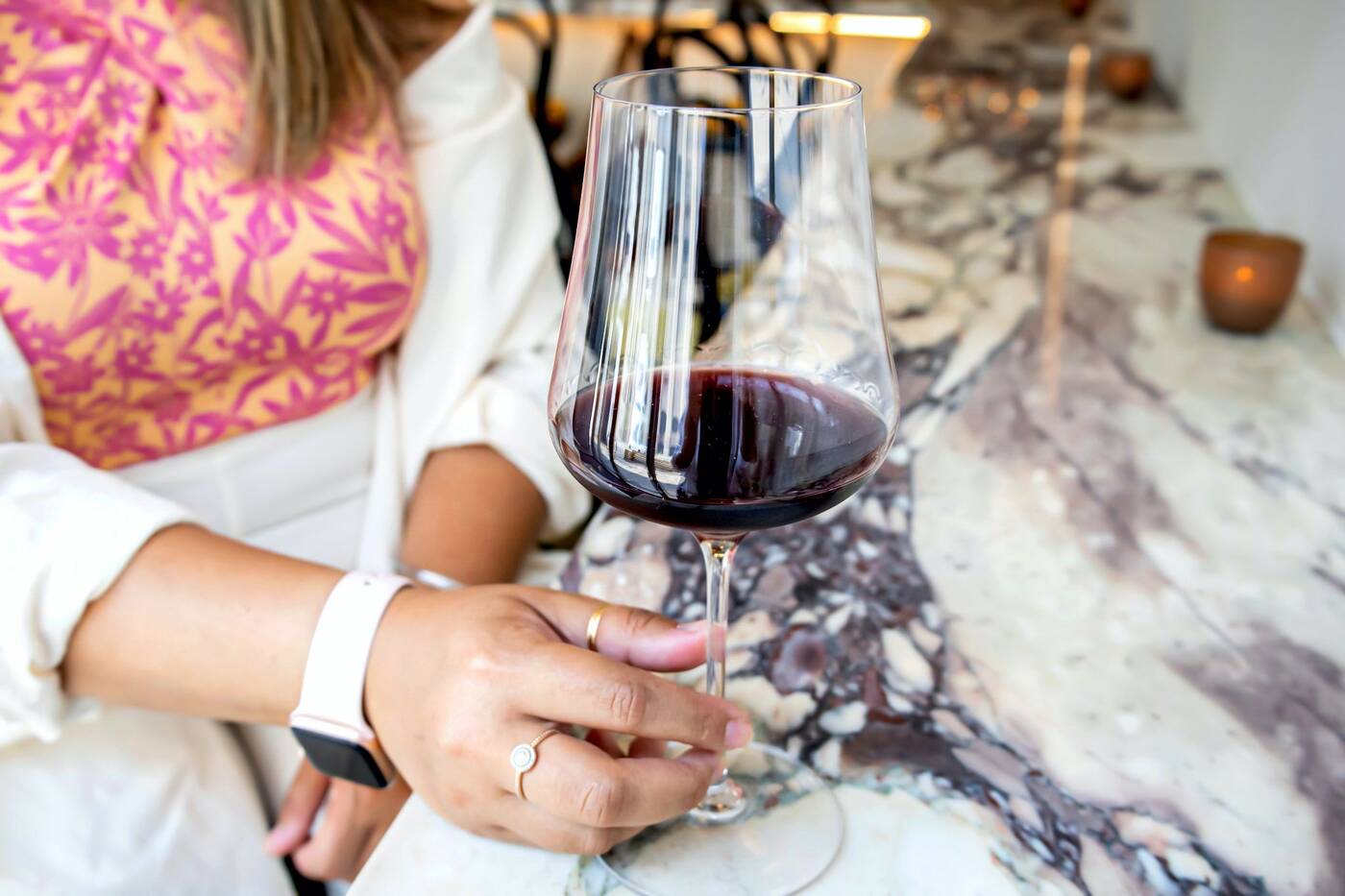 The names of the bottles here may sound intimidating. However, the culture at Henry's is to use education to make them approachable enough, so don't feel shy to ask questions about what you're sipping on.

Evening Land Pinot Noir La Source (2012) airs notes of black plum, red cherry fruit, and black pepper. Strong to taste at first - this one grows on you as you move through the glass. 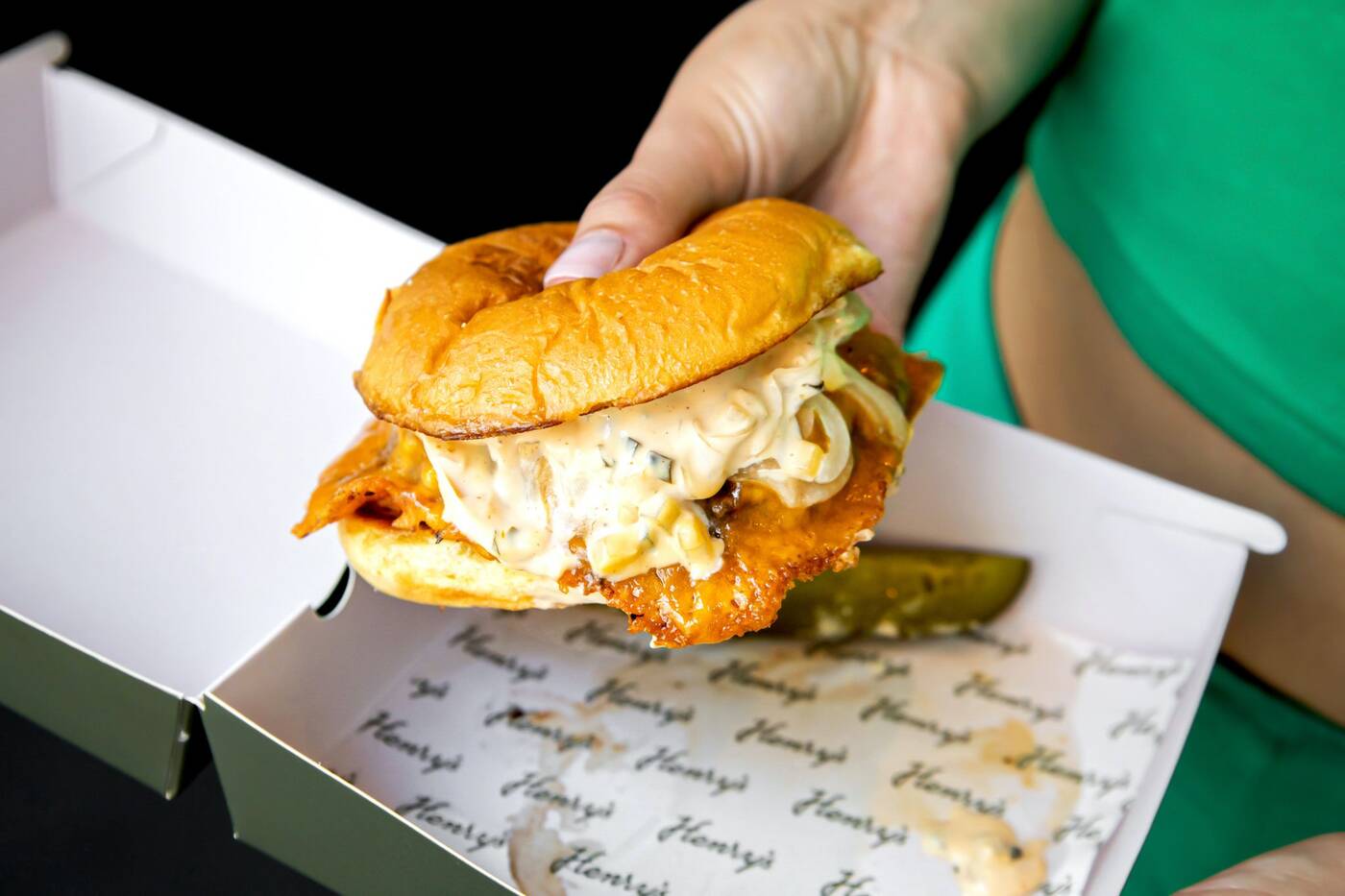 Dark wine goes nicely with a heartier meal, such as Henry's Waygu Burger ($18.00). Bacon and cheese layers on top of the patty which is then doused with a creamy mayo mixed with onions. 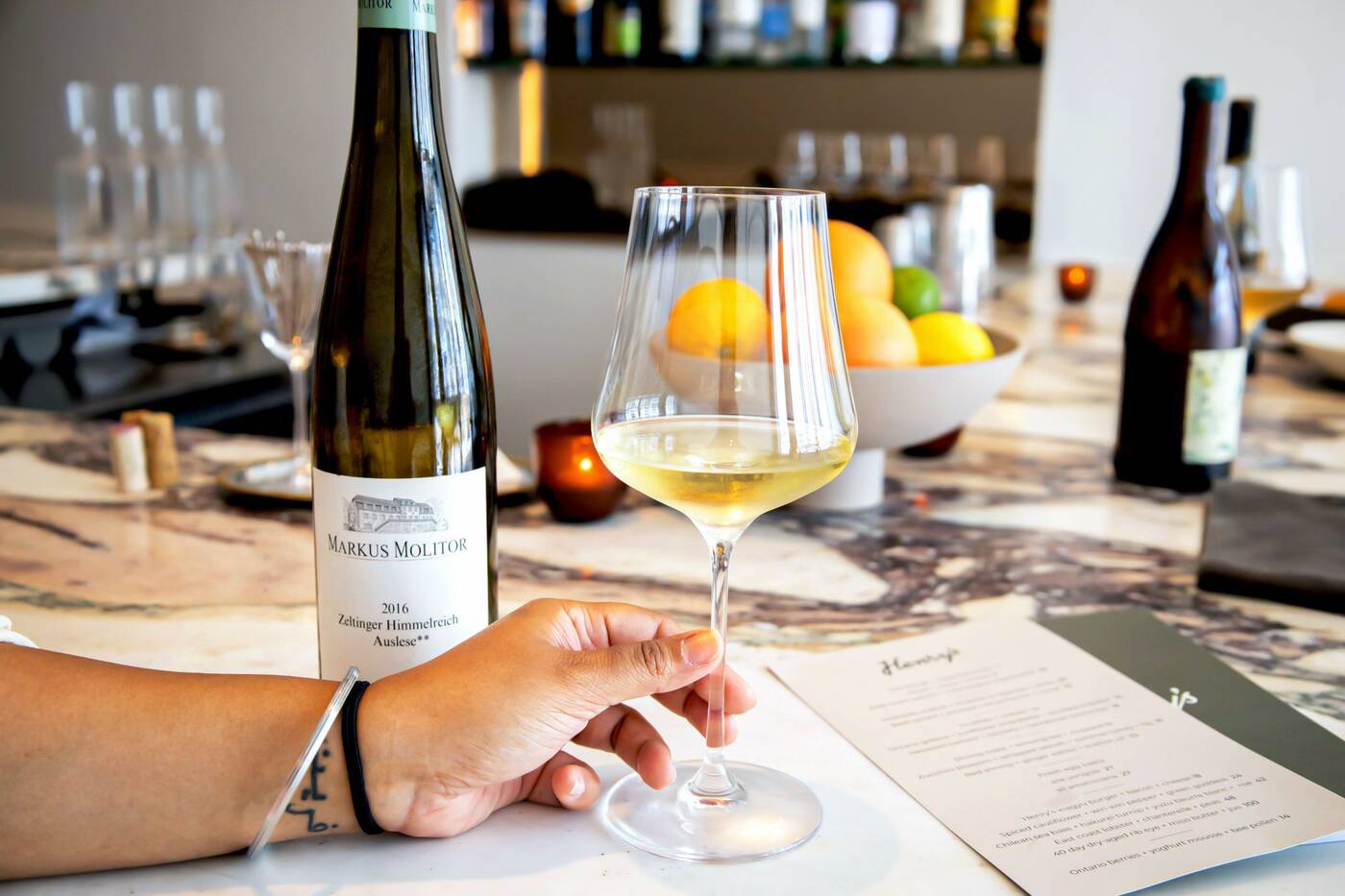 My personal favourite from what we tried at Henry's was the Markus Molitor Riesling Zeltinger Himmelreich Auslese (2016).

Leaning on the sweeter side, you'll taste more tropical fruits in this one, such as pineapple and peach, making it a nice summer-themed sip. 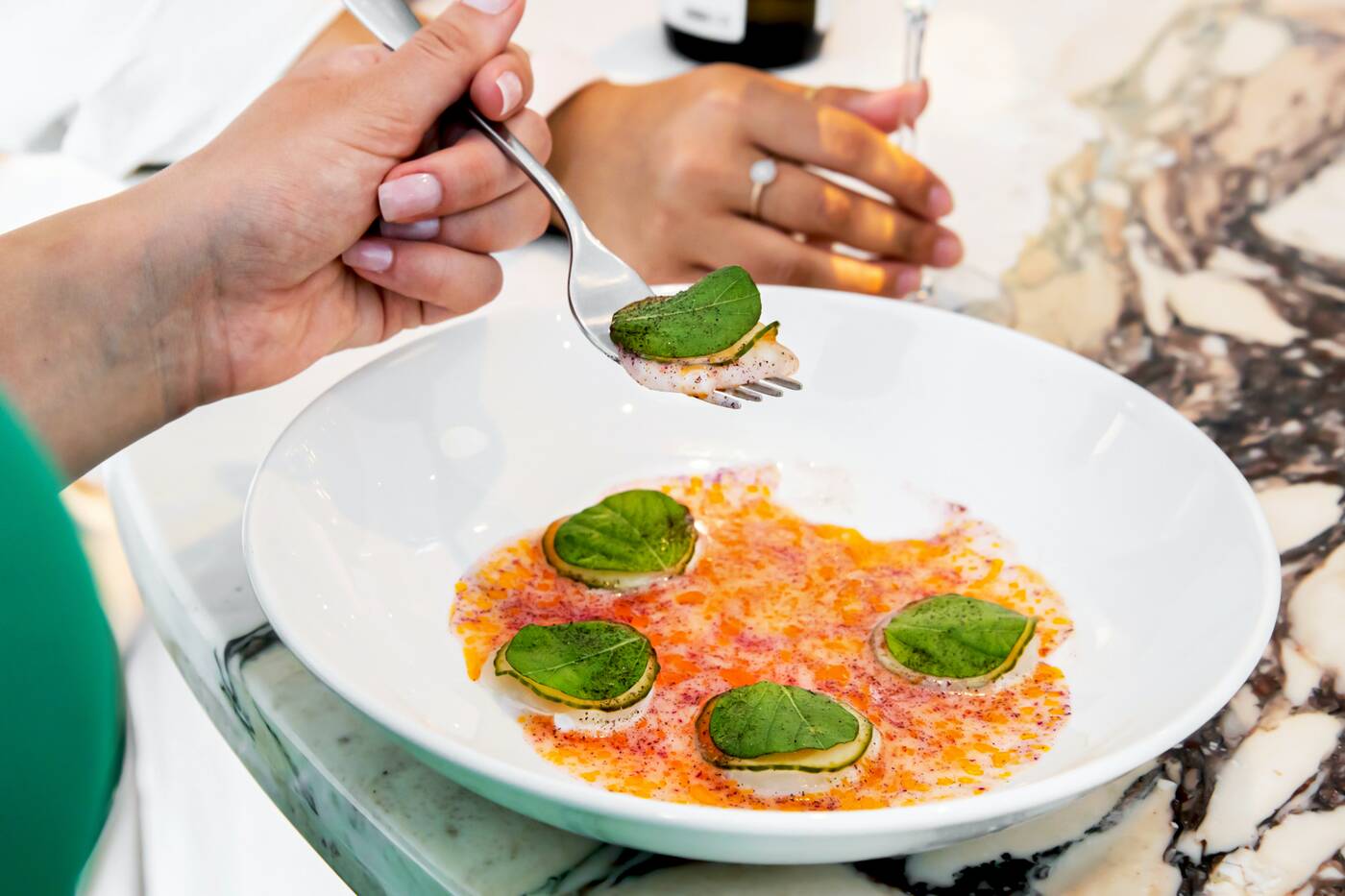 I'd recommend getting the Riesling if you're also into trying the scallops ($28.00) on the menu.

Hokkaido scallops sit in a tart rhubarb vinegarette, hence the specks of pink and orange throughout this dish.

Thin slices of cucumber and shiso - a Japanese herb are piled on top of each piece adding to the overall freshness. 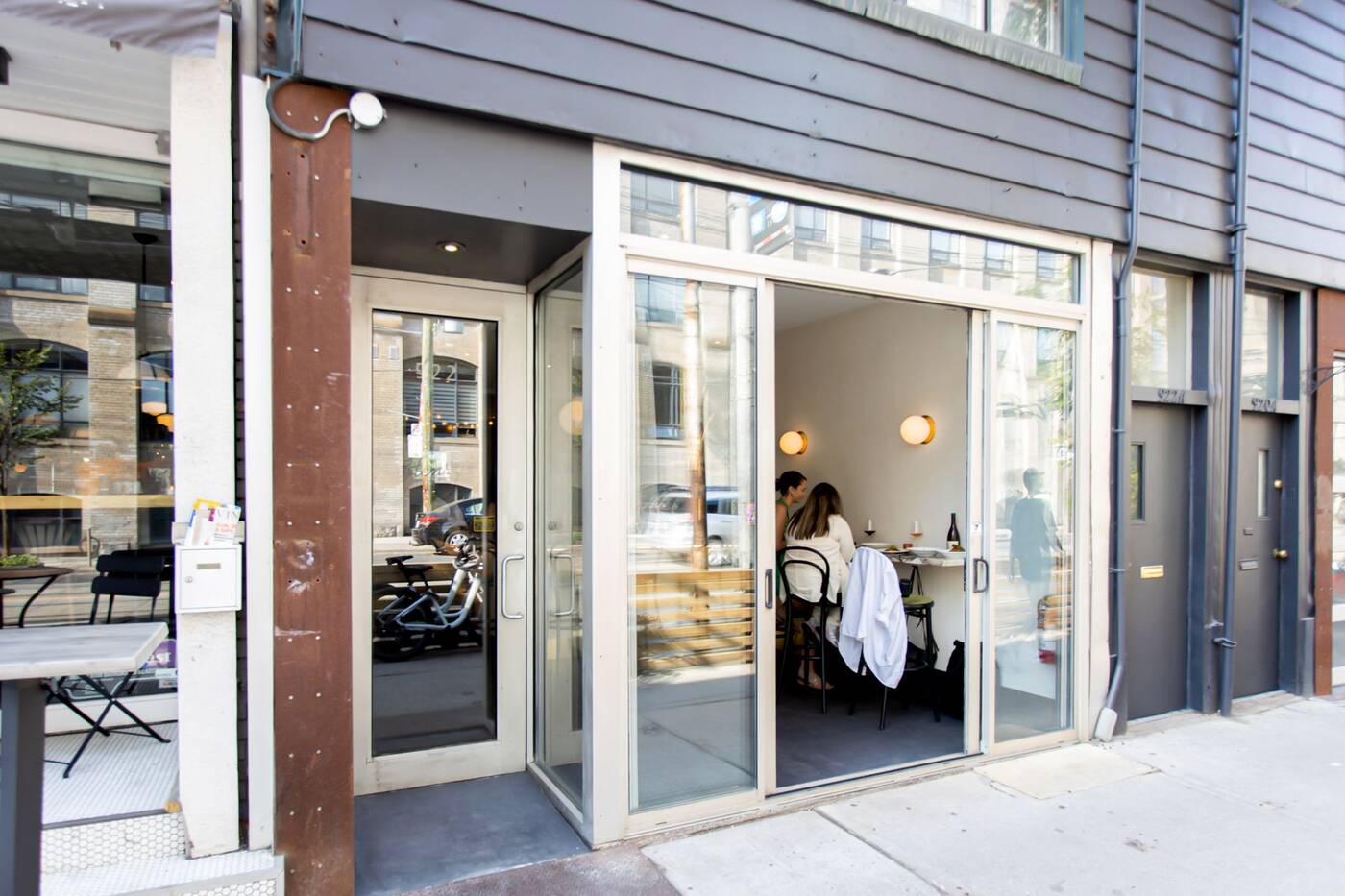 Glass sliding doors are open for the public to see inside at Henry's, since newly opening they've found most of their customers come inside after curiously walking by - usually locals living in the area of West Queen West.