Helena's Magic Kitchen is currently open but their offerings and services may be affected due to the pandemic. Please contact the business directly for more information about any changes. Is this your business? Please contact us if you would like to update this message.

Helena's Magic Kitchen is a landscape of meat pies, quiches and hearty home cooked dishes stretching as far as the eye can see. Despite the dimly lit subterranean feel of 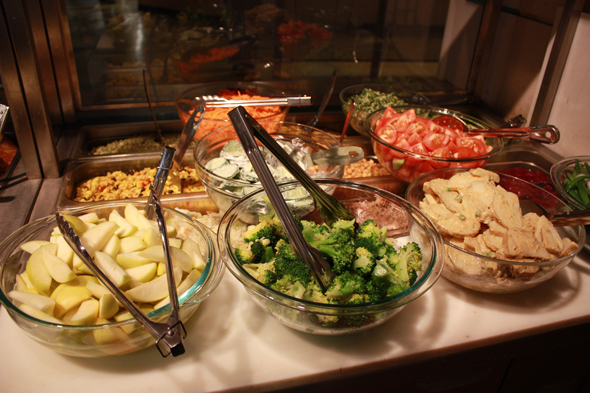 Village by the Grange food court, it has long been a microcosm of independent eateries offering global cuisine. Sean Lee and his wife, Sunni Lim took on the business from Helena nearly four years ago. On the surface, it seems that little has changed from the Eastern European staples; however, upon closer inspection, the dishes do embody a distinctive Korean flair.

Rather than the dense, creamy custard of traditional French quiches, Magic Kitchen's broccoli quiche replicates the light, soft, silky texture of Gaeran-Jim (Korean egg custard). Sean assures me that it's "30% less fat than traditional recipes," since he uses milk rather than heavy cream. We opt for a combo ($5.30), which includes any slice of 'pie' and two side salads. Confronted by a technicolour myriad of veggies before me, we finally choose their curry lentil rice salad, along with their string beans simply tossed in a coarse sea salt and crushed black pepper. The beans are fresh, crisp and perfectly seasoned, while the rice salad is severely undercooked. 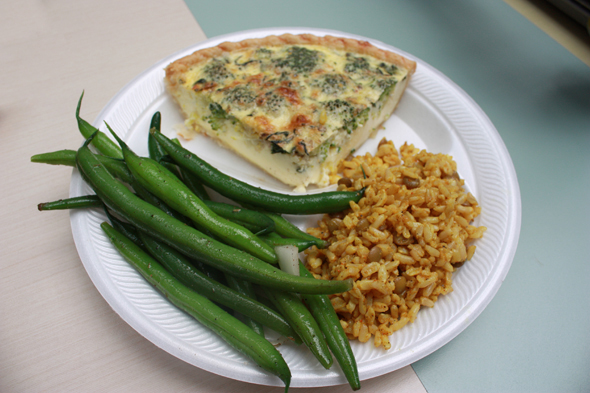 I try Sean's claim to fame, the stuffed chicken with spinach. A meaty breast stuffed with creamy spinach is breaded and deep-fried. The crunchy exterior seals in the juicy meat and luscious spinach inside. It is quite tasty, yet not the least bit oily. I also try a latke with sour cream. The latke is flecked with carrots and is much doughier than the Ukrainian version. Rather, it is more reminiscent to Kamja-Jeon (Korean potato pancakes).

Beet salad proves to be a tad overcooked and the natural sweetness is masked by apple vinegar and sugar. Buckwheat salad with slices of radish, marks an entirely new sensory experience. I find it rather bland at first bite, but it leaves a pleasant earthy aftertaste. 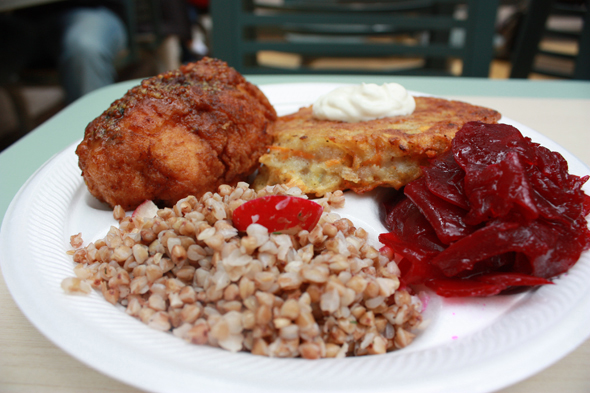 Ukrainian and Korean food may seem like an odd coupling, but Helena's Magic Kitchen somehow makes it work effortlessly. Just be sure to beat the art students, high school kids, office workers and the Chinatown crew, as most items are completely sold out during the lunch rush. 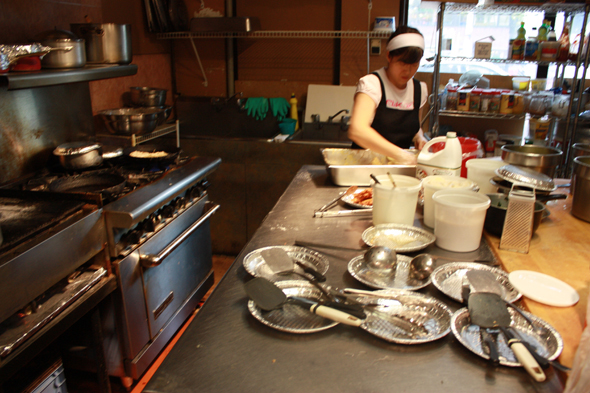