Han Ba Tang is a newly-opened Korean restaurant and bar in North York , featuring traditional ingredients with a modern twist as well as innovative cocktails. The restaurant's name actually means "one full round" in Korean.

The new restaurant preserves the old building's history. From the bare exposed brick wall to the chalkboard signs to the worn-and-torn tiled floor, the decor comes off as awfully cozy for an industrial vintage restaurant. Mismatched hooks are placed on the walls and table for your bags and coat. Outlets are placed around the perimeter of the restaurant for ease of phone charging (hey, Instagram-ing photos is hard work). 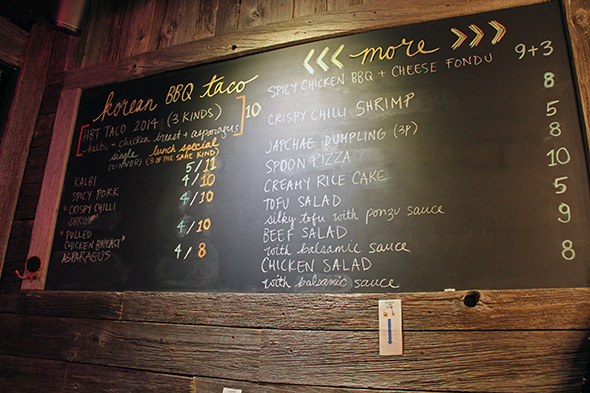 In terms of the menu, pricing is fair - you get large portions of food for the price. And how cool do these drinks sound? Han Ba Tang offers concoctions like the Party like a Rockstar and S*** Disturber. Their sangria is always a hit, and was frequently ordered while we were there. 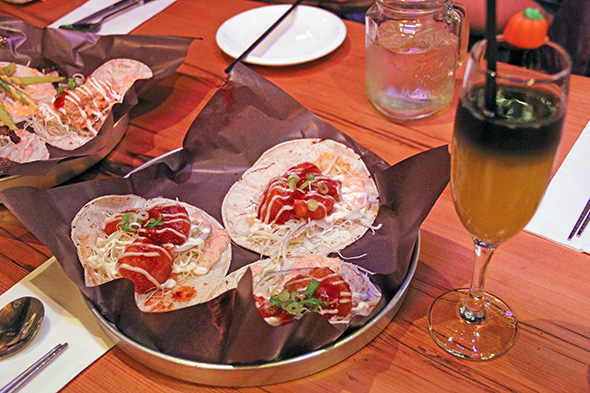 We started off the night with some crispy chili shrimp tacos ($4 for one or 3 for $10) - one of Han Ba Tang specialties. Crispy tangy shrimp with a hint of spice is laid over a bed of shaved cabbage. While the flavouring and seasoning was appealing, we found it dulled the shrimp flavour - but they still stood out from the rest of the night's tacos. 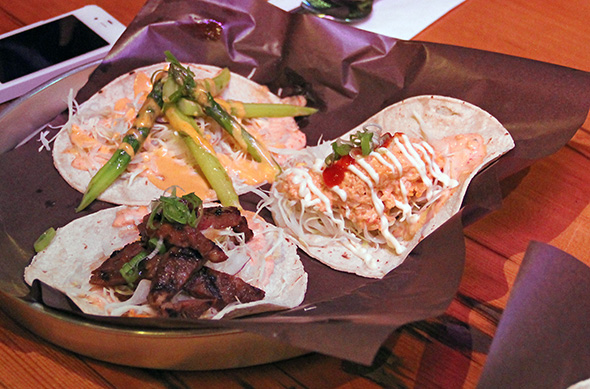 Next were the Han Ba Tang tacos ($10), which are a trio of tacos with kalbi, shaved chicken breast and asparagus. The kalbi was the easily the best - and the chicken breast was a little underwhelming but only because the kalbi was so good in comparison. I wasn't a huge fan of the asparagus taco - but it's a useful offering for any vegetarians dining here. 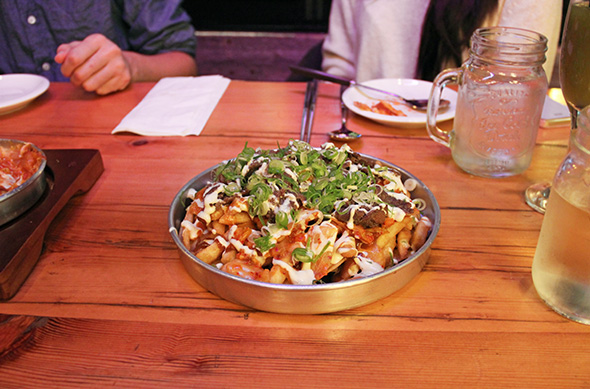 Kimchi fries - the epitome of Korean fusion - have recently taken Toronto by storm. This version ($8) features a hot plate of crispy fries with some tangy and spicy kimchi tossed on top, as well as a housemade gravy topped with Japanese mayo, housemade kimchi and a generous toppping of bulgogi ($3 extra). The kimchi is way more authentic - and it's actually spicy , unlike some places in Toronto. 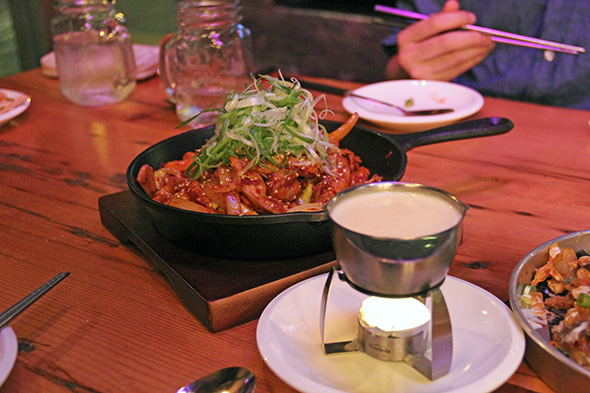 The spicy chicken ($9) was the table's favourite dish of the night - a huge plate with a mix of rice cakes, spicy barbecue chicken, onions and carrots. The cheese fondue ($3) is optional, but recommended, as adds another dimension and tames some of the heat. Dip it in or mix it, it's up to you, but we found that mixing it in tasted better. (What is it with Korean food and cheese that just tastes so good?) 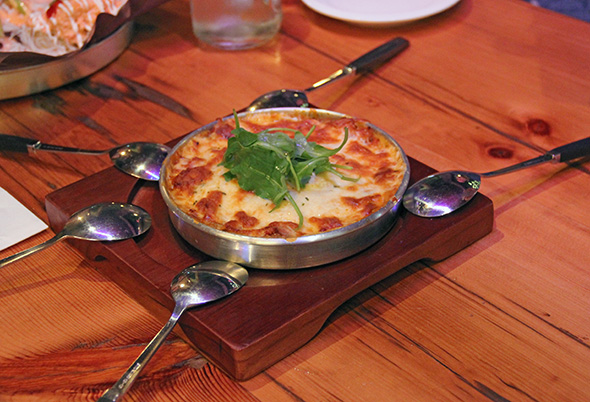 Spoon pizza ($8) is a very popular dish in Korea and is essentially a pizza - but a mashed sweet potato base replaces the crust. As the name suggests, you "spoon" the pizza, which in this case is a gooey dish of delicious tomato, cheese and vegetables. It is the ultimate comfort food; we pictured ourselves eating this on a cold, chilly day. I've never seen anything like it at a Korean restaurant in Toronto before - it's a unique dish. 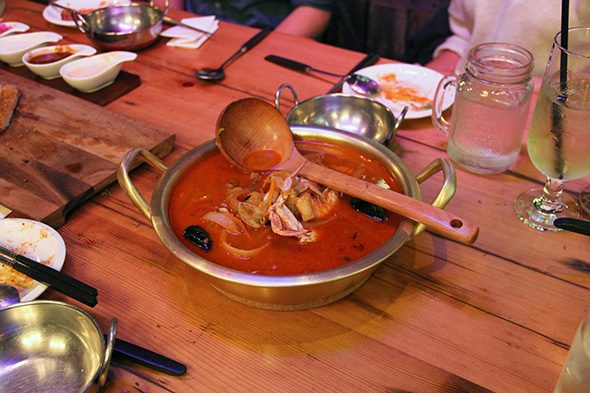 Jjambbong (or Champong, as it is sometimes seen on menus) is a popular Korean spicy seafood noodle soup served, in this case, with ramyun noodles ($10/small, $18/large). At first sip you can taste an incredible amount of seafood in the soup. Keep scooping, and you'll find generous portions of shrimp, mussels and crab. Yes, crab! In terms of the size, the first night we came we had four people share the large and it was more than enough to fill us. Two people could easily eat the large and be full from just that! 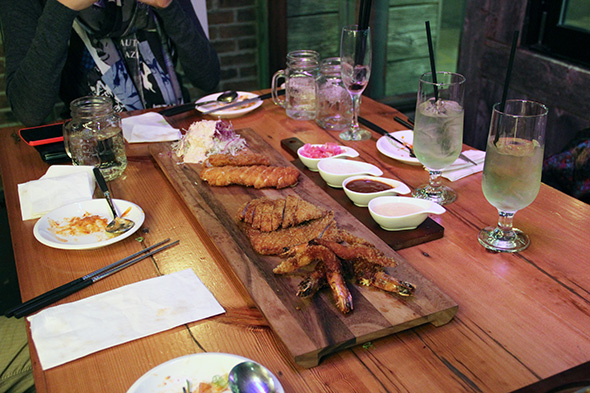 The enormous Cutlet Combo Board ($20) was our final dish. The platter of deep fried pork cutlet, fish and shrimp, with accompanying sauces, could easily fill up four to six people. There was minimal breading on the food and yet they managed to get it SO crispy! Without a doubt, their shrimp and fish were the best. 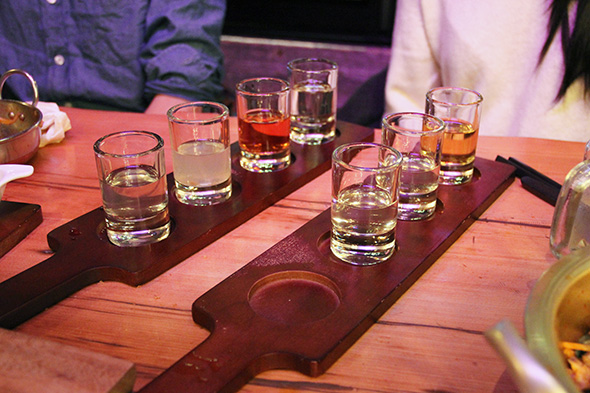 One of the coolest things about Han Ba Tang is that they make their own infused soju! This changes weekly as they infuse it themselves. At the time of our visit they had citrus (lemon/lime), strawberry, cucumber, pineapple, apple and cinnamon, ginseng and dates. (Try a flight of four shots for $15.) Our favourites were easily the pineapple, strawberry, and apple and cinnamon (which tastes like an alcoholic apple pie). The ginseng is more for someone who can really take a bitter drink. 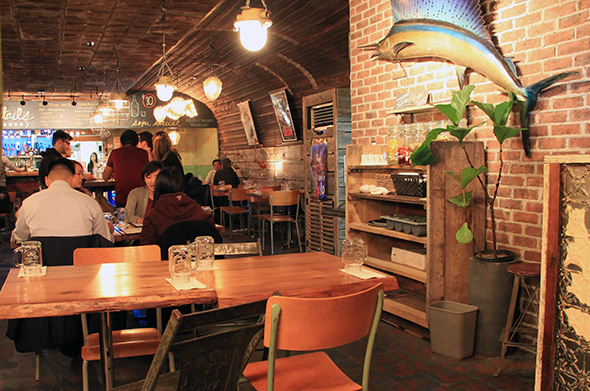 Han Ba Tang hip and modern fusion style food is a breath of fresh air in a neighbourhood that prides itself on traditional Korean food. If you love Korean food and are looking for something different, then Han Ba Tang is a good option.