The Grand Elvis is a total reinvention of the spaces that were once Rose and Sons and Big Crow by Anthony Rose and his team. It's inspired by classic checkerboard floor taverns like Toronto's Allen's and New York's Minetta Tavern or P.J. Clarke's.

Gone is a massive chalkboard and the wooden booths that distinguished the space previously, though it still retains an eclectic feel and a bustling little open kitchen. Plush seating and black walls add sophistication. 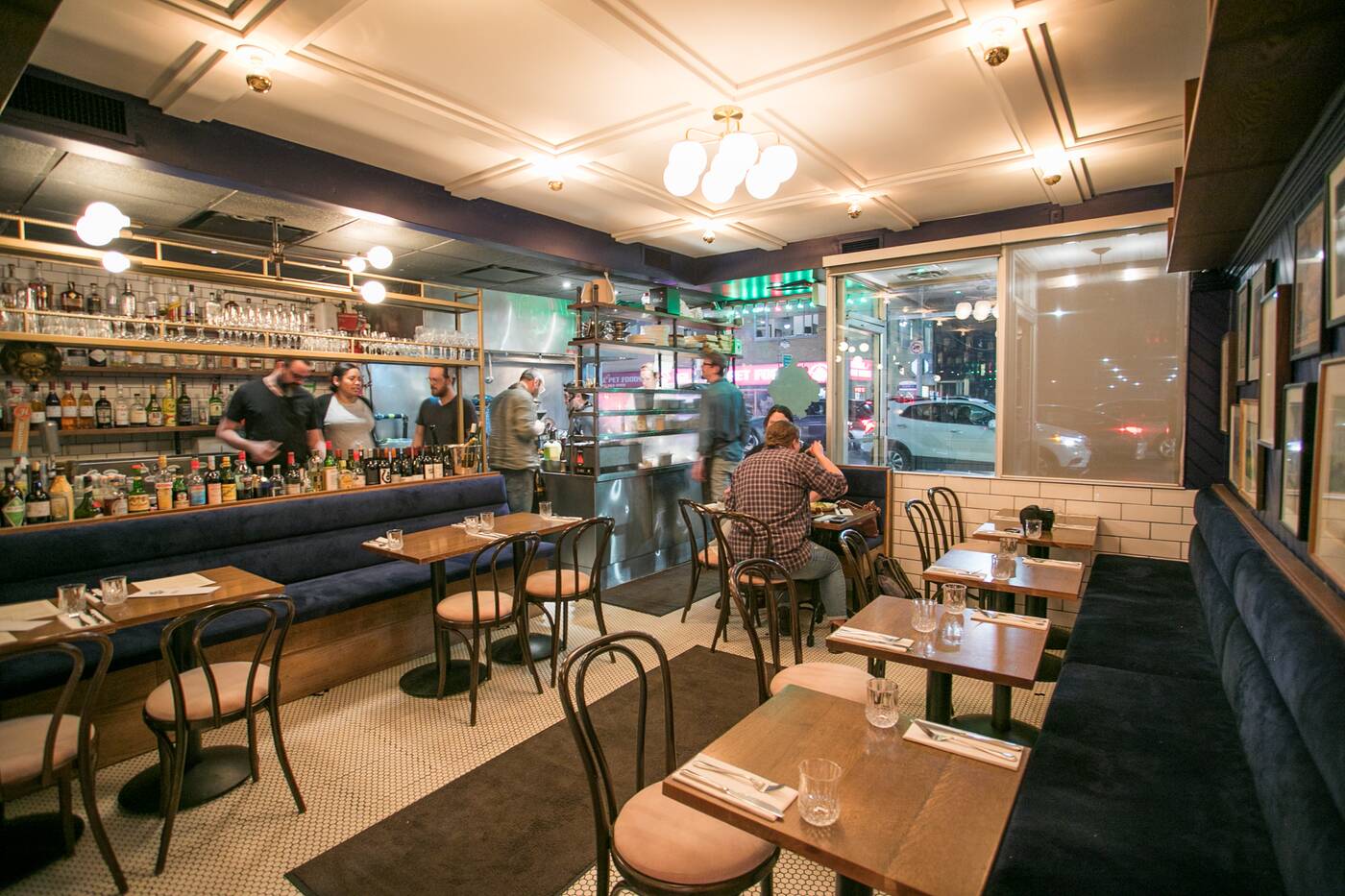 Venture towards the back via a labyrinthine series of staircases and hallways strung with Christmas lights to find the evolution of the Big Crow space, a new sort of "ballroom" equipped with lots of extra overflow seating. 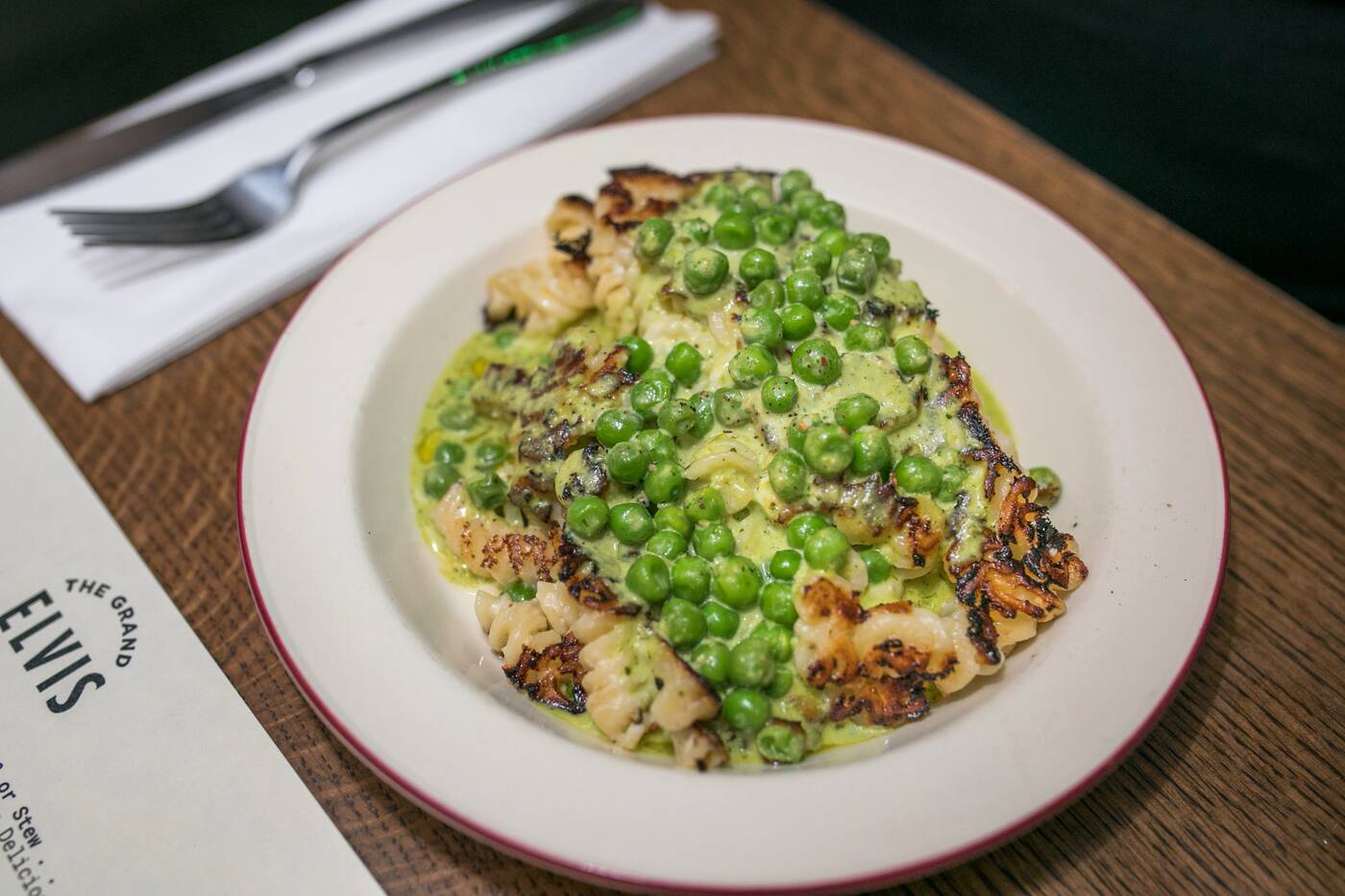 Hearty appetizers like a Griddled Mac & Cheese ($15) are practically mini entrees. The mac is made into a loaf with lots of parmesan, cheddar and ricotta cheese and given a hard char on the griddle on both sides, resulting in an indulgent interplay between crispy and melty textures.

Sweet peas and a mint pesto cream green sauce brighten the heavy dish. Other substantial shareable apps include a range of hefty salads and pizzas. 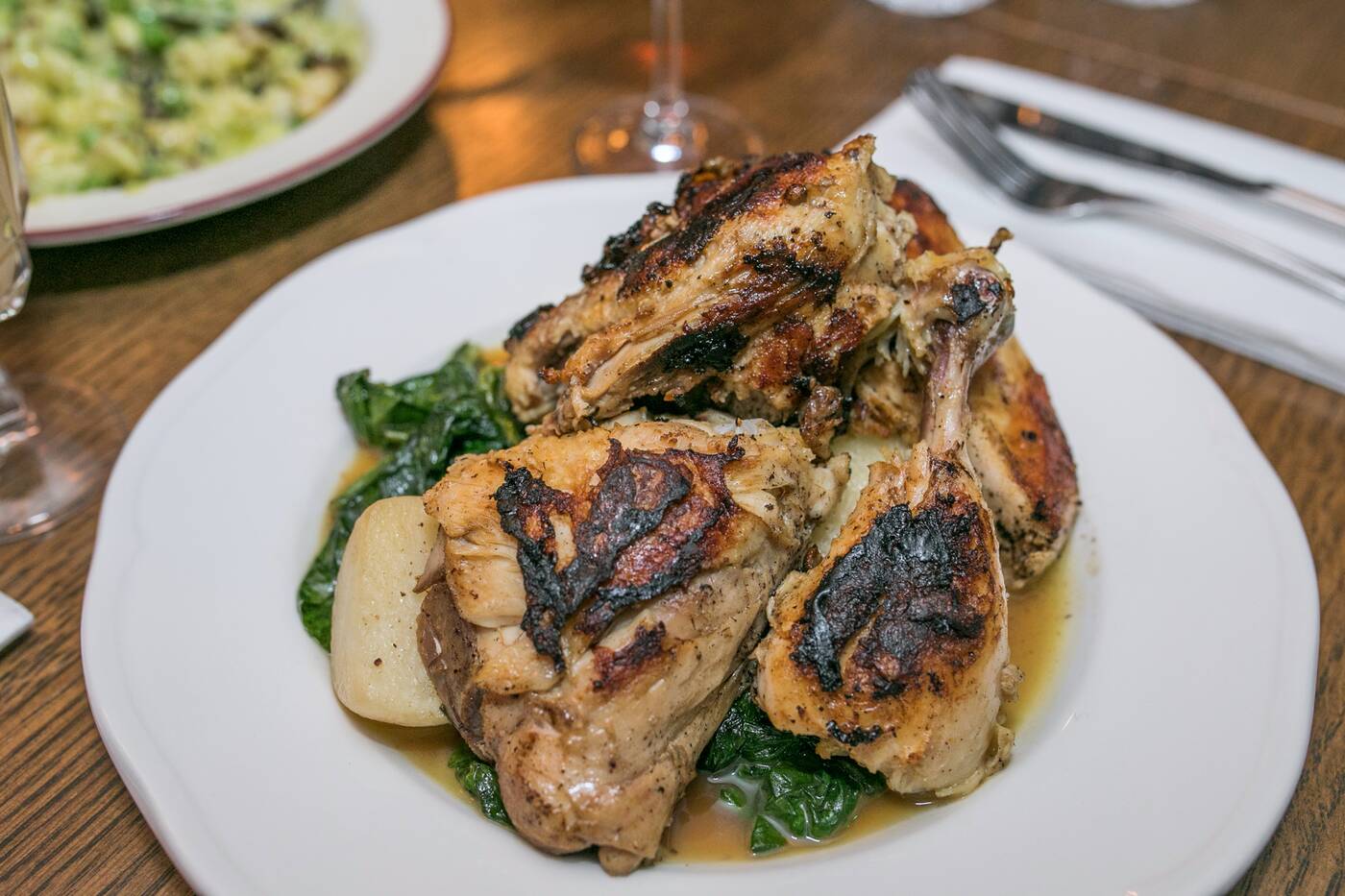 A half chicken can be ordered griddled or buttermilk fried for $25. The griddled version is juicy and rustic, served with brown butter, greens and very firm turnips. 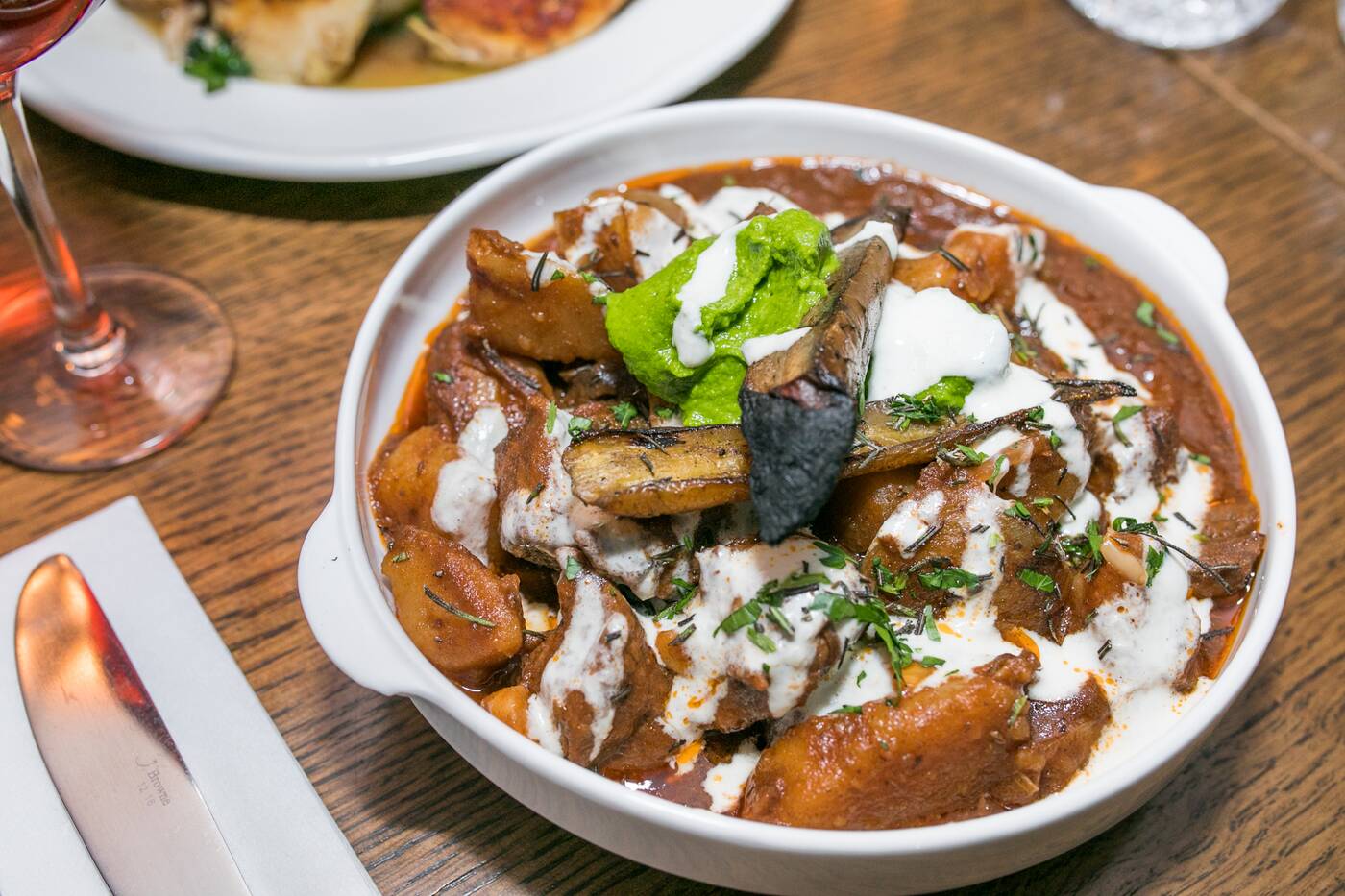 Beef Stew ($27) loaded with potatoes is topped with coal-roasted carrots and another thick green sauce, and has a big kick of rosemary to it. 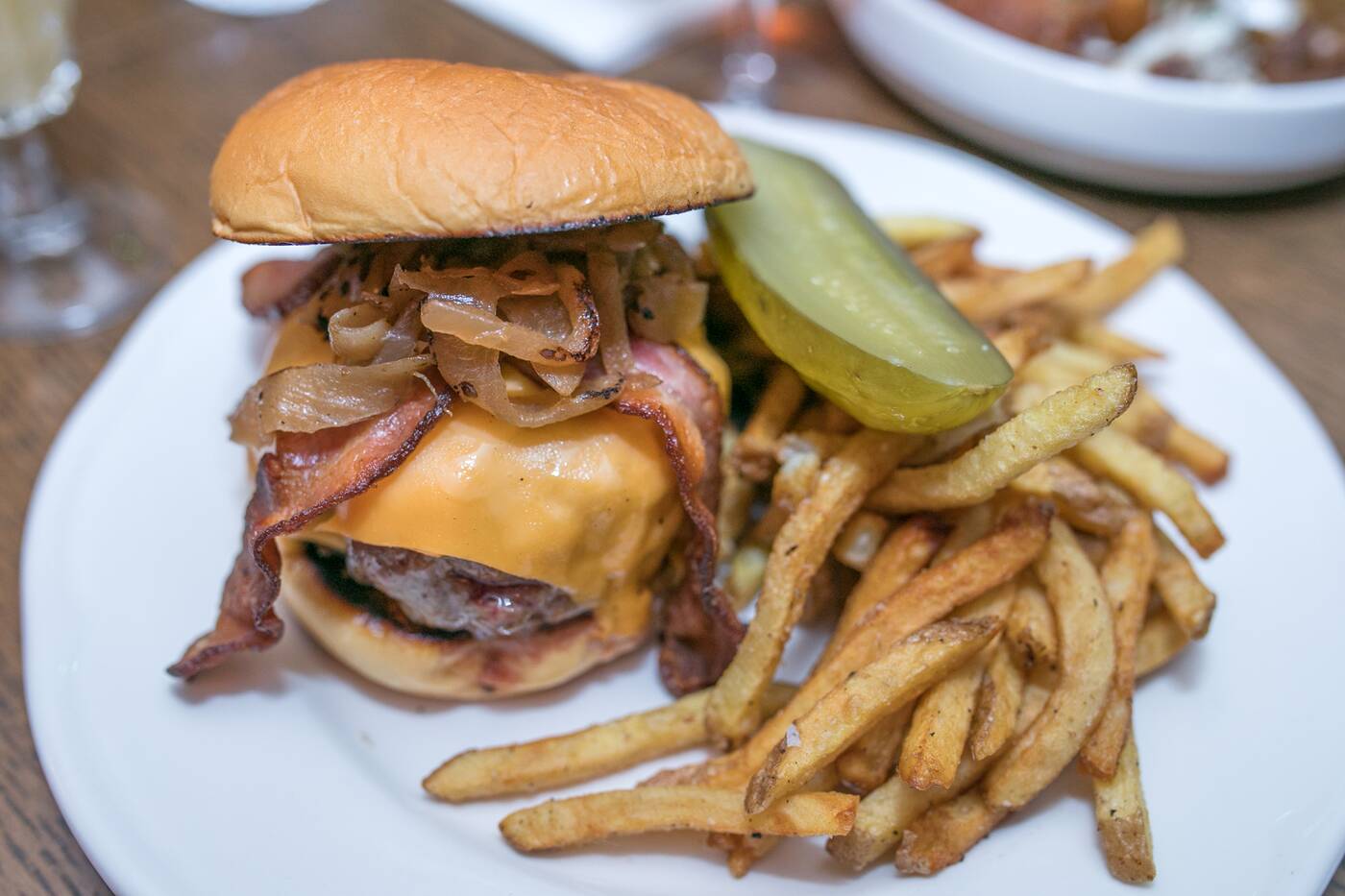 A "Brindle Room" Style Banquet Burger is pricey at $21, but lives up to its name. Inspired by the burger served at Brindle Room (owned by a friend of Rose's), a griddled half-pound patty is made out of dry-aged neck and suet, topped with cheese, caramelized onions and bacon and presented on a squishy Martin's potato roll.

It's accompanied by a very juicy pickle wedge along with fries that are out of this world, ever so slightly oily and soggy and generously seasoned. 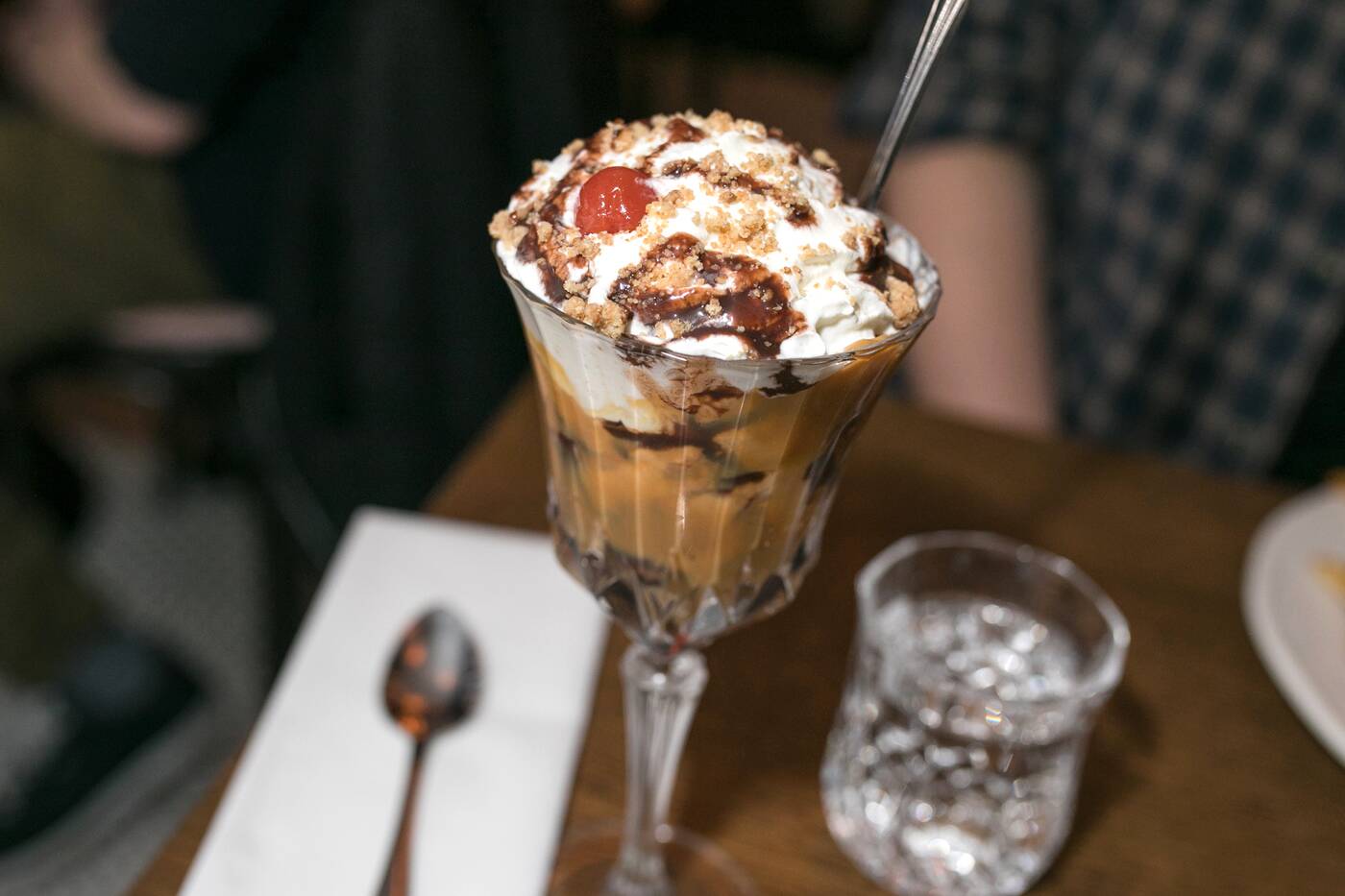 Butterscotch Pudding is one of two $12 desserts, a thick and velvety classic topped with whipped cream and a cherry for an old school feel. 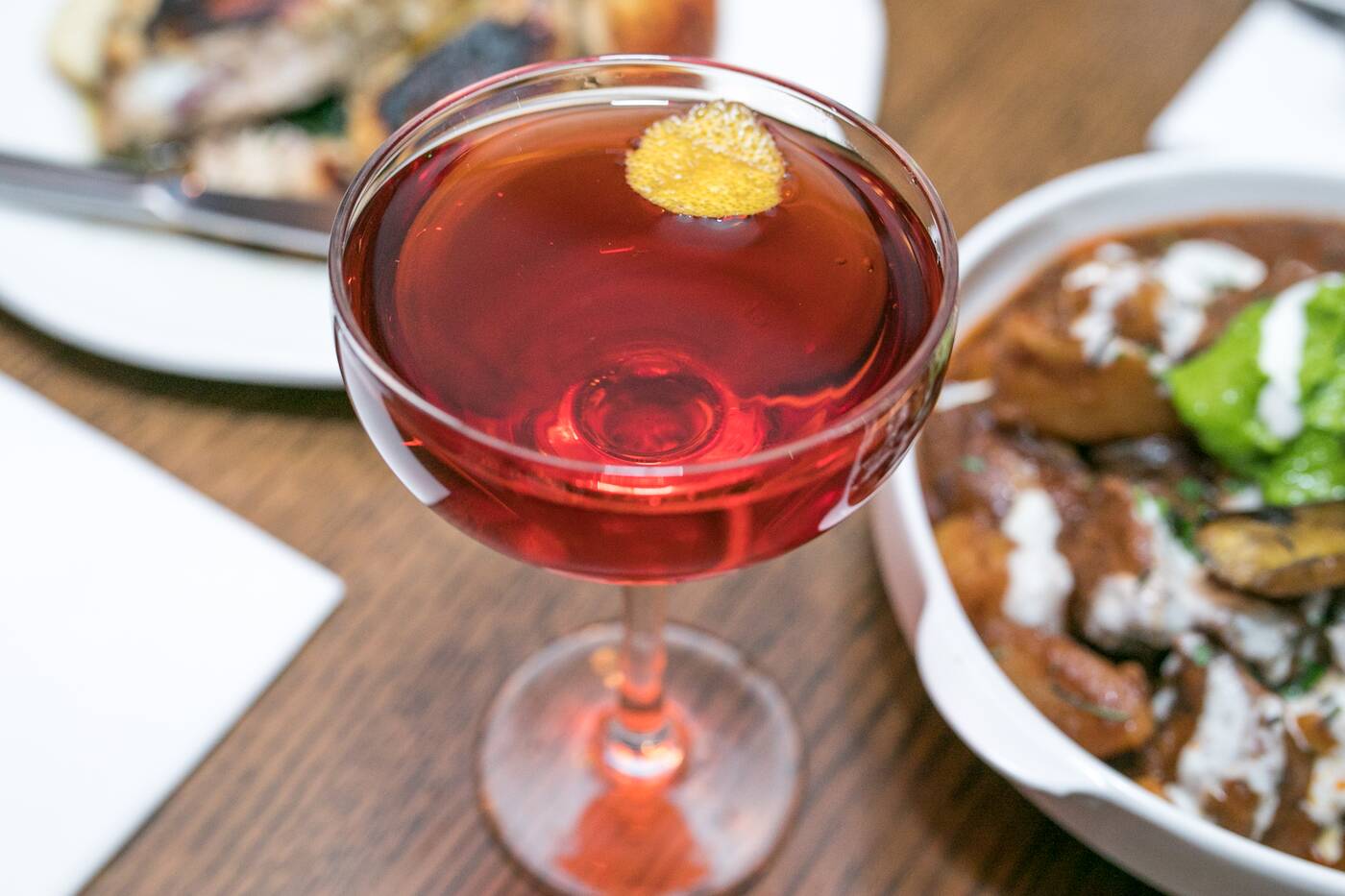 The Emma Goldman ($15) is a take on a martini made with bianco vermouth and vodka infused with beet and lemongrass for a bright colour and strong, earthy taste. Emma Goldman was actually a Jewish anarchist political activist and writer that lived in Toronto. 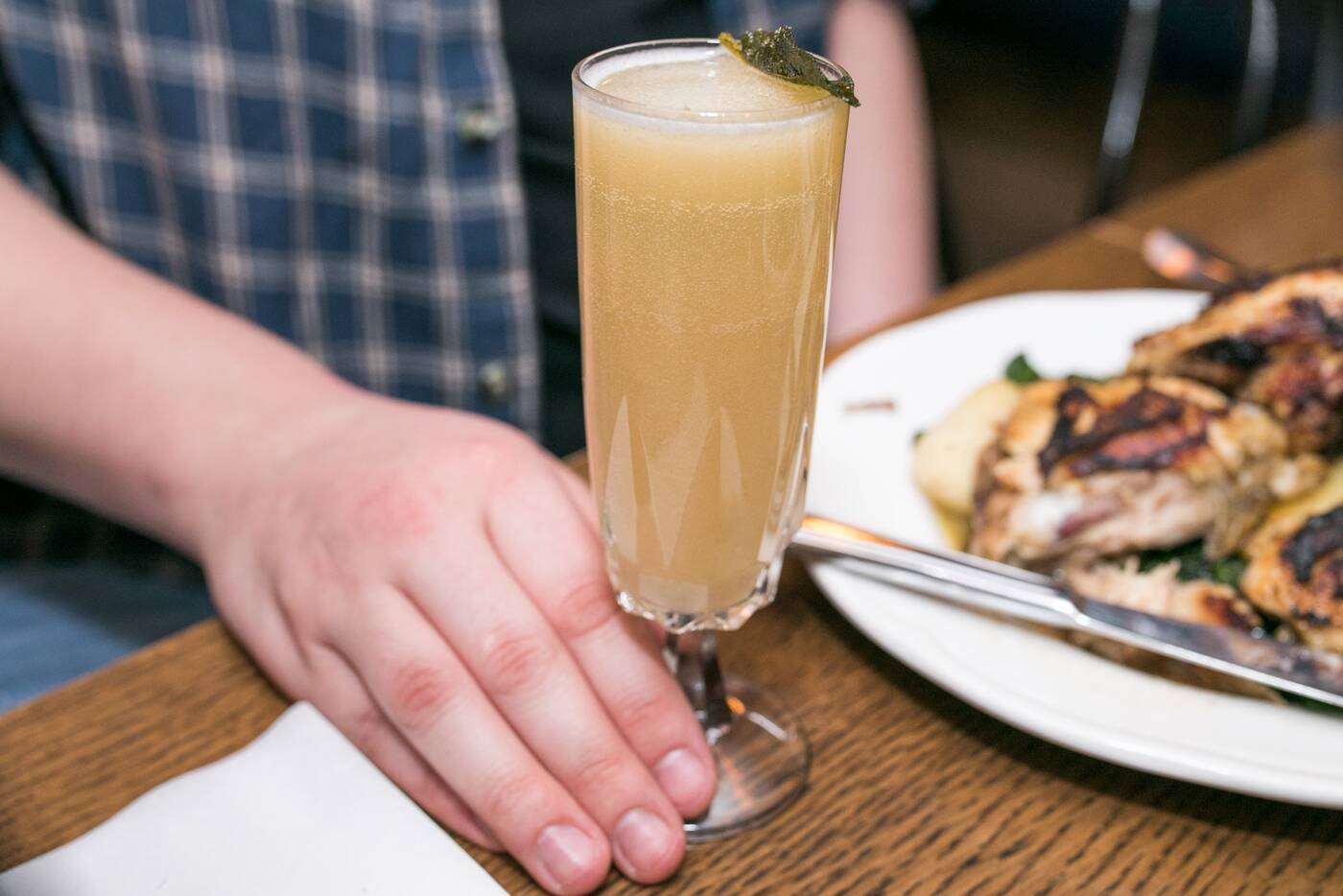 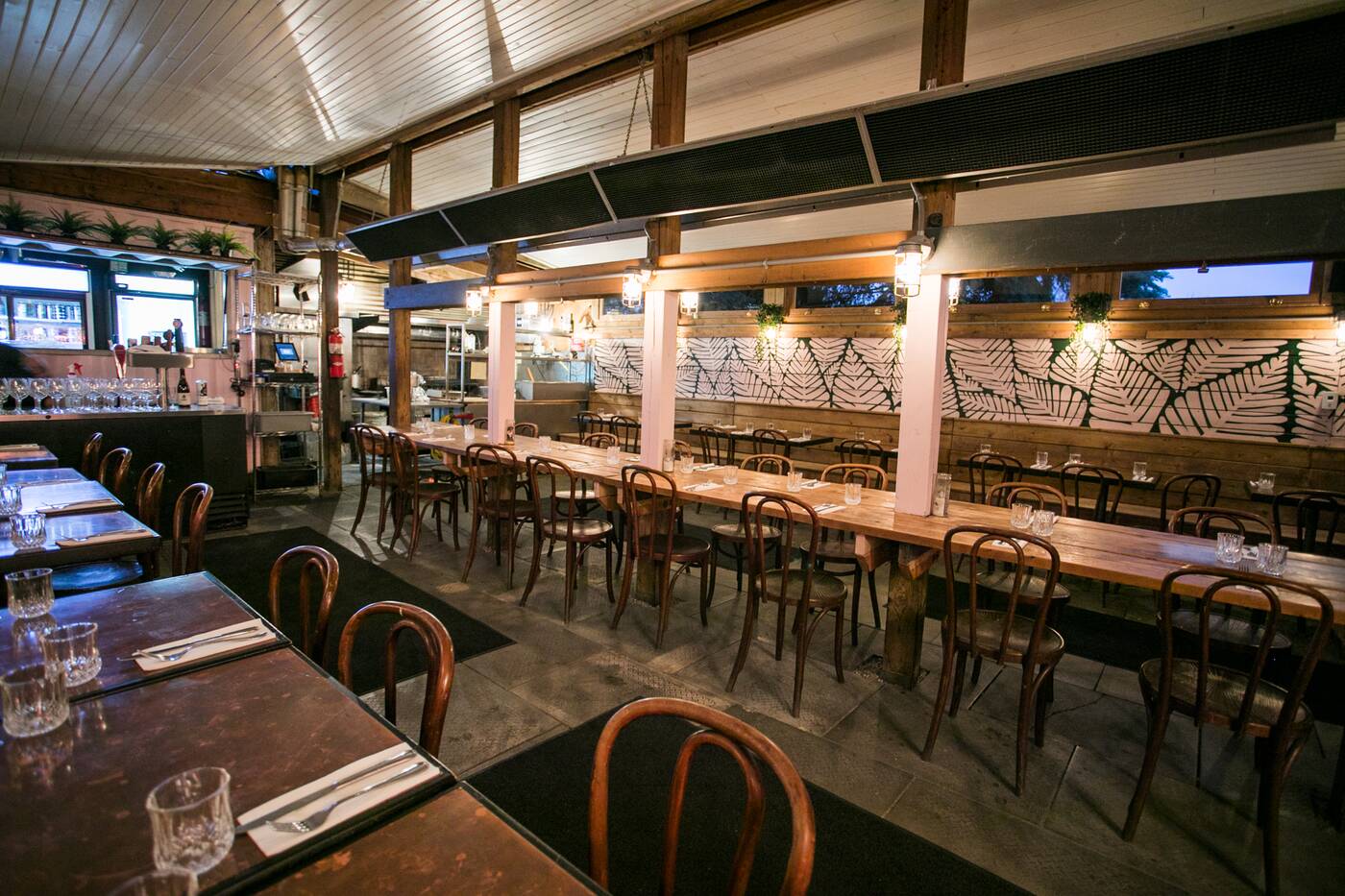 You'll also be able to find a burger-focused lunch menu and a brunch menu at The Grand Elvis. 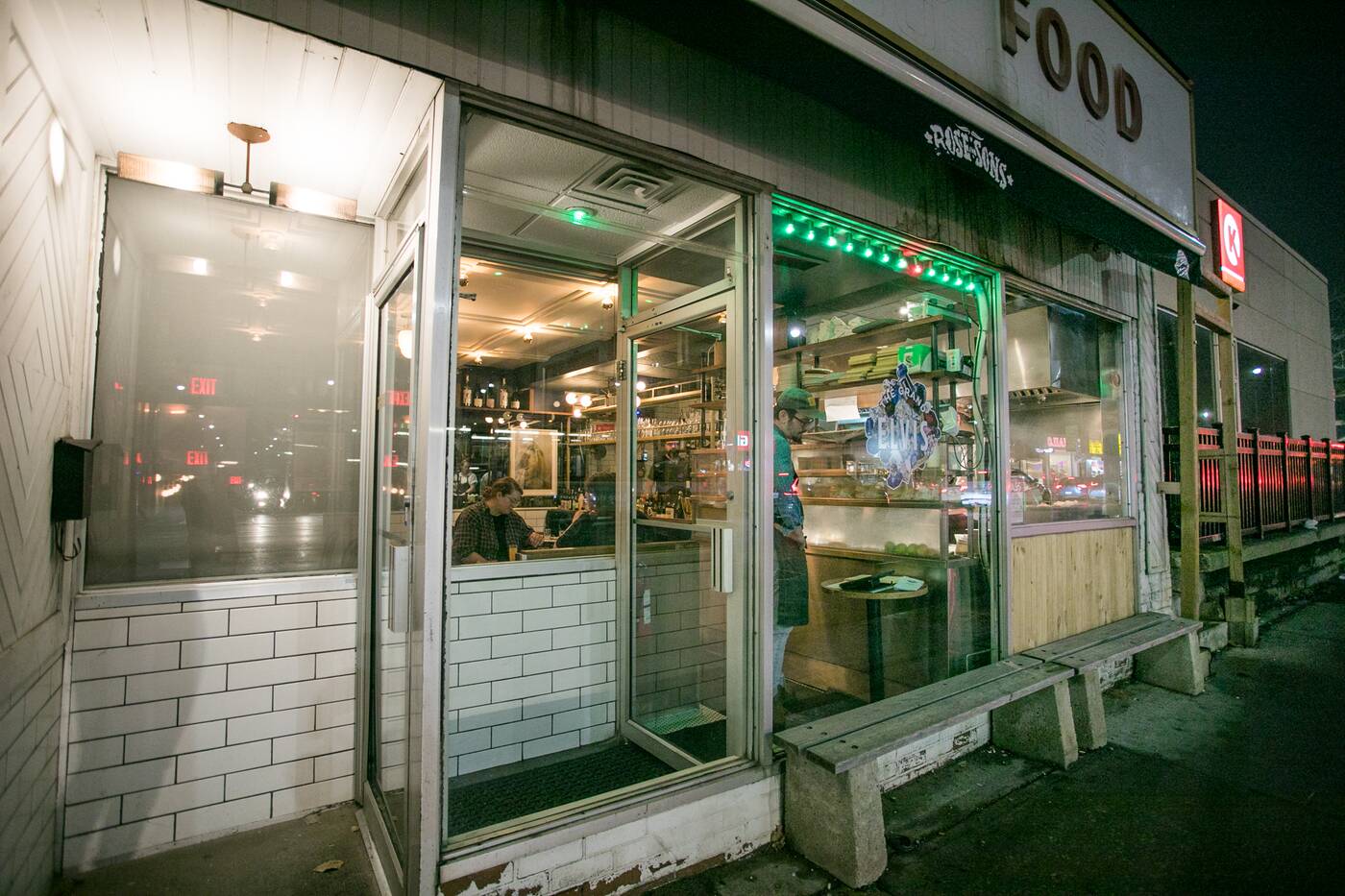