Gazi aims to intelligently fuse modernized twists on Greek meze with the tradition of tapas. Everything on the menu is either made in house, or imported from Greece. 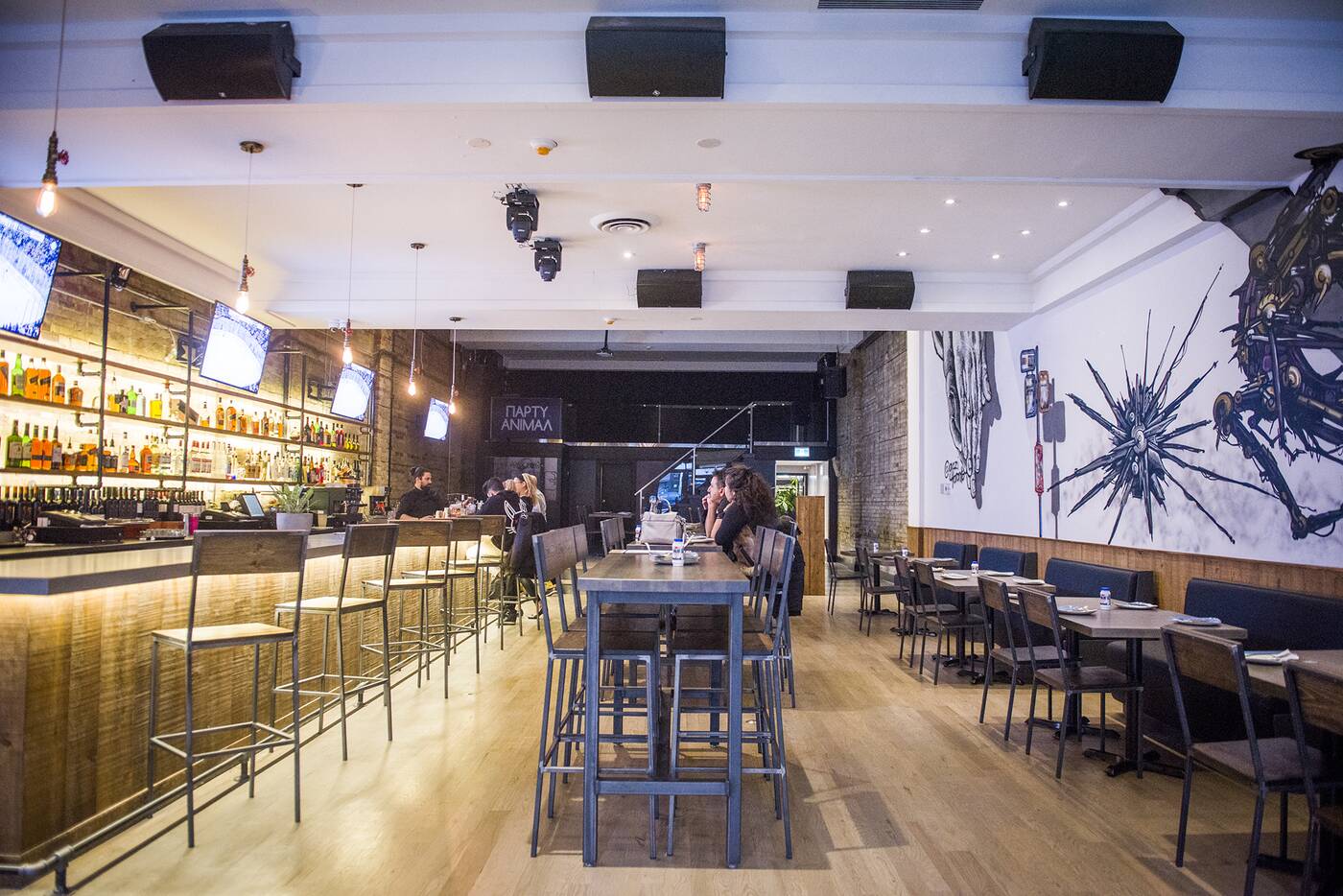 The decor is inspired by the nominal Gazi neighbourhood in Greece, which owner George Aivalis describes to me in Toronto terms as Queen West meets the Distillery District. 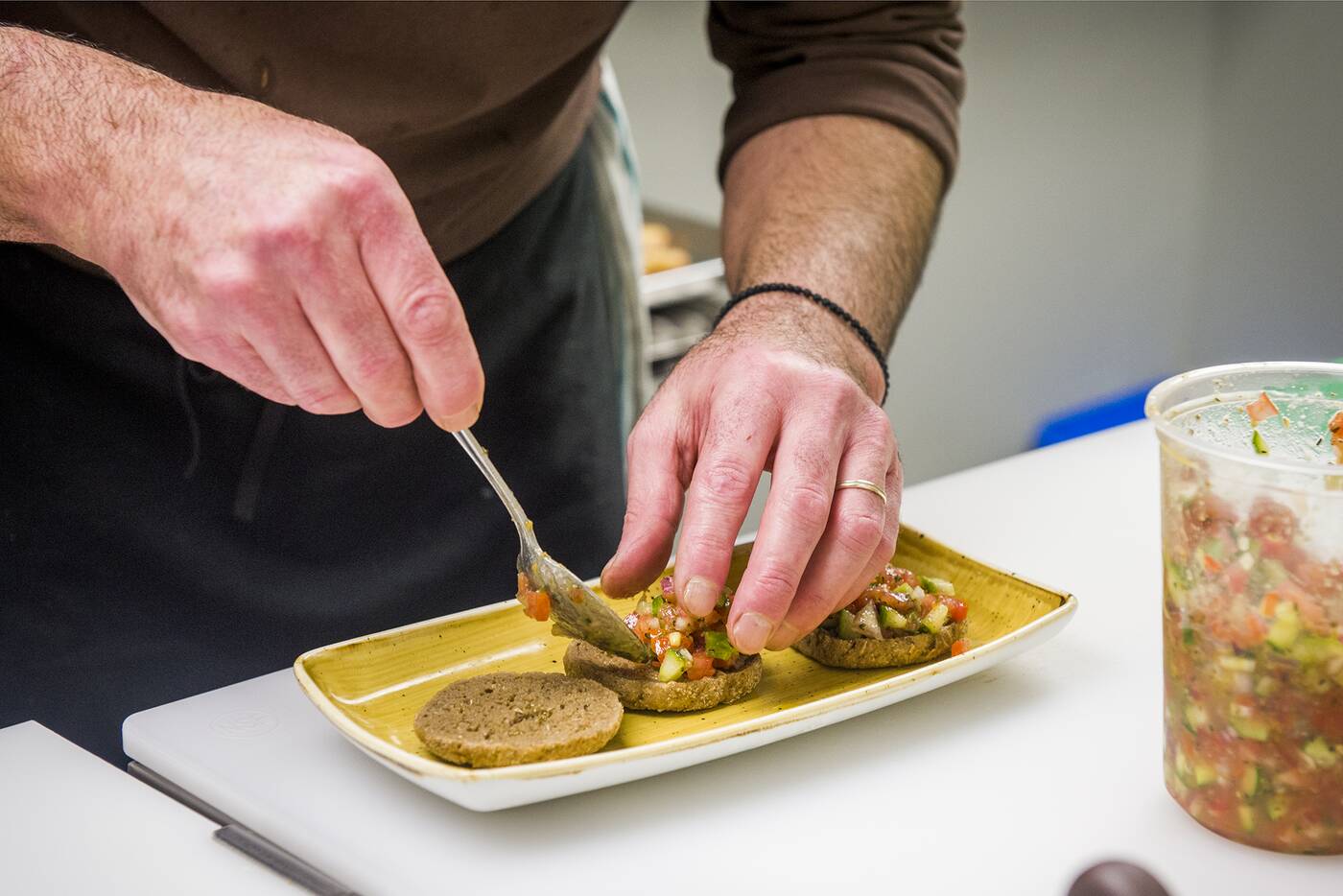 Kritikos Dakos ($12) is a base of rusk, a hard whole wheat bread, soaked in water and olive oil with a finely chopped tomato salad with cucumber, roasted red pepper, red onion, aged feta, thyme, oregano, fried capers and olives. It’s a bit crumbly and unmanageable on a fork but fresh-tasting. 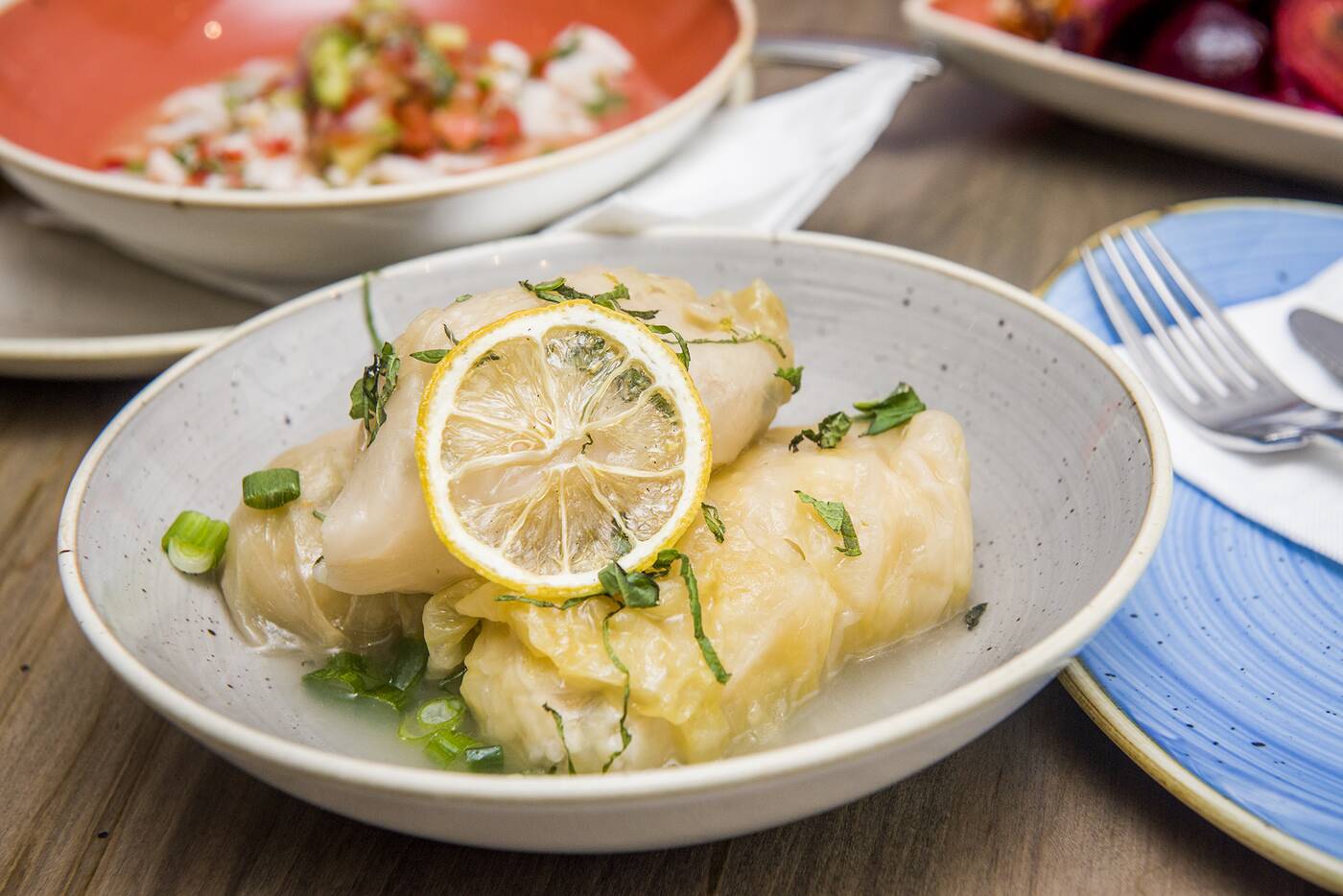 Sarmades ($10) are basically cabbage rolls, the cabbage leaves brined and stuffed with rice, spearmint and pancetta. I find the dish a bit watery and find myself longing a bit for Eastern European tomato sauce, but the filling is flavourful and the pancetta is hearty. 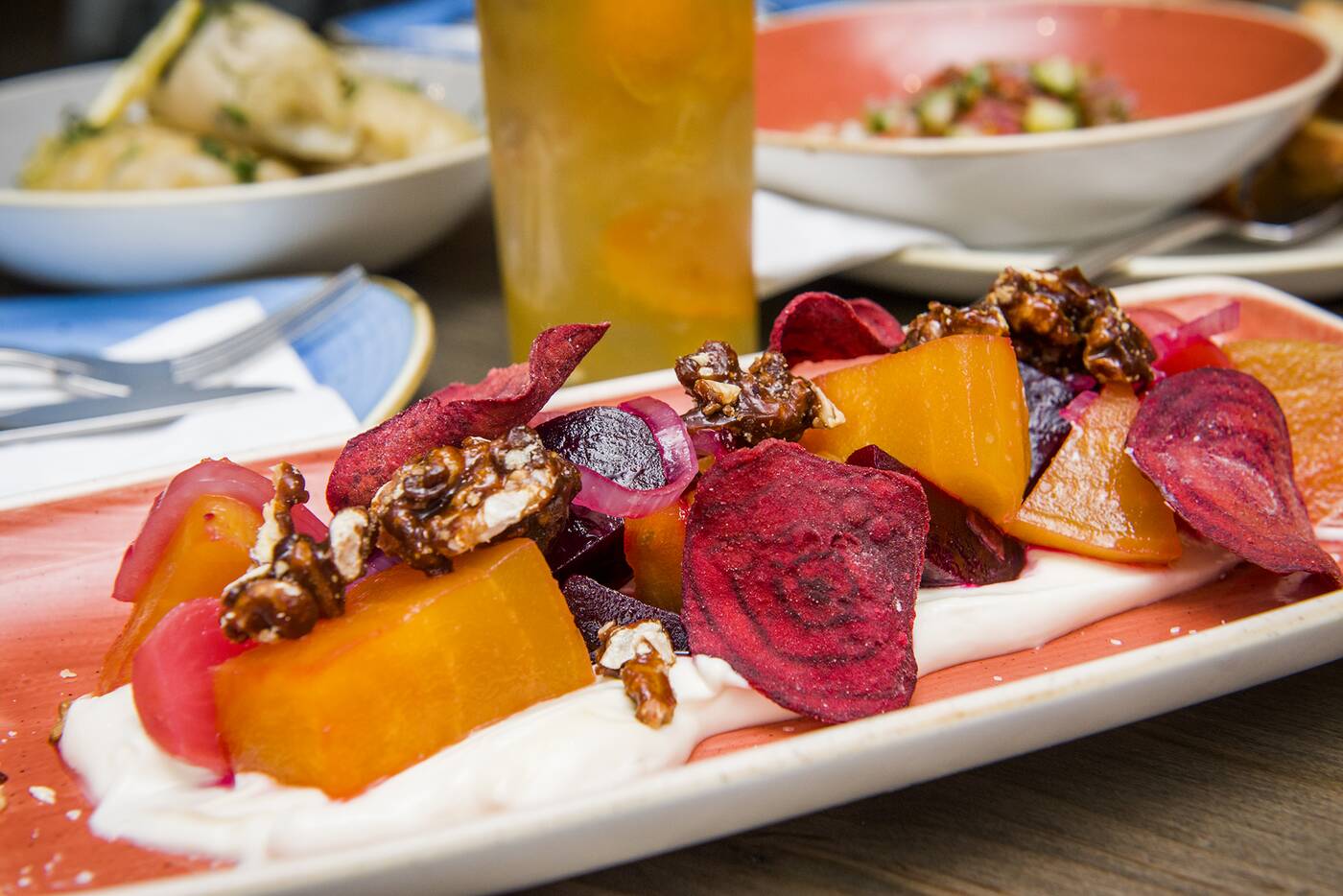 Pantzaria ($12) is a salad of thickly cubed, sweet red and yellow beets balanced by acidic pickled radish and red onion with big chunks of caramelized walnut and crunchy, salty beet chips, all on a tart but airy bed of yogurt and wild honey. 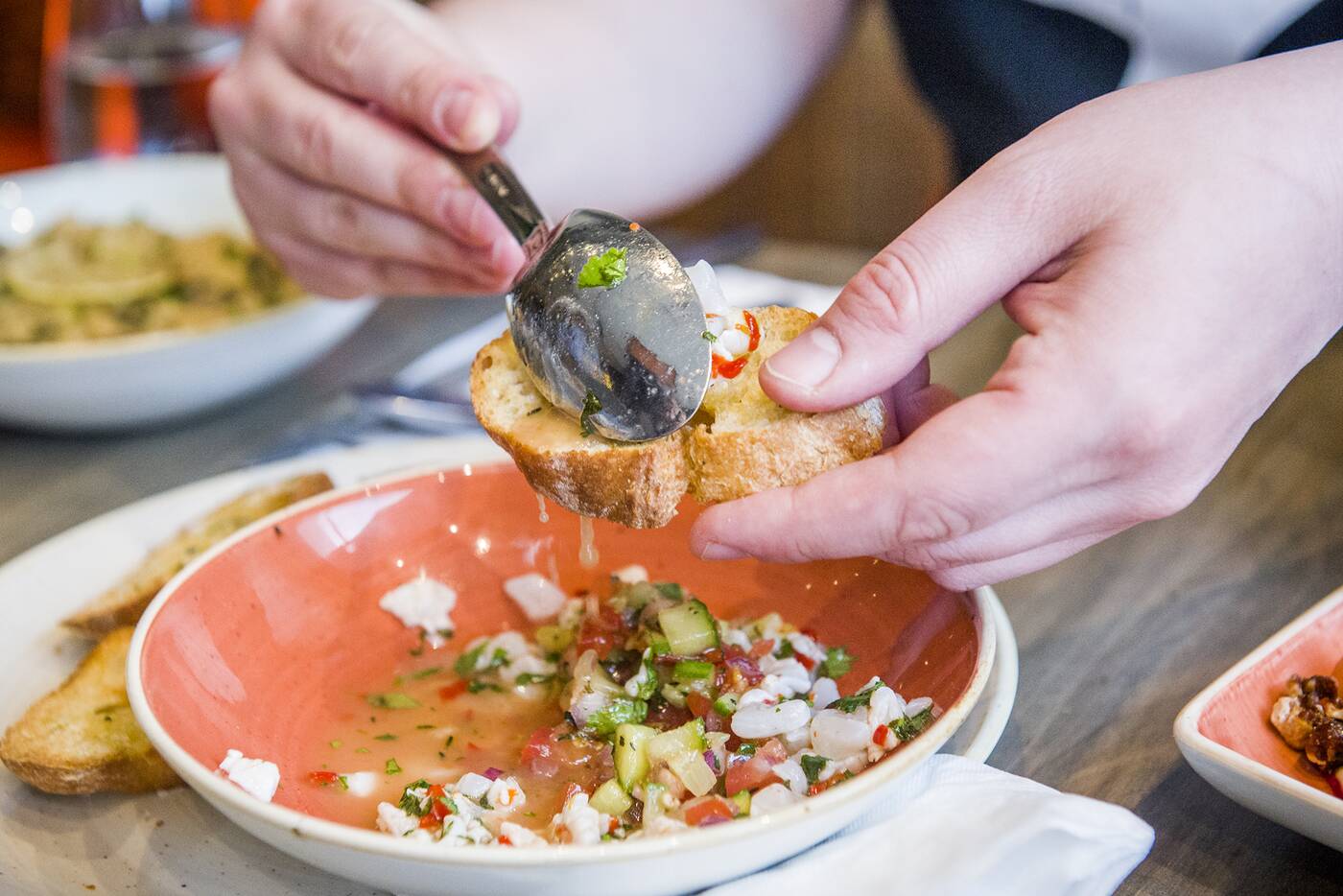 Greek ceviche ($17) is a nice accessible fusion, an even fine dice of Greek sea bass, scallops, shrimp, spearmint, coriander, citrus, chili and ouzo for a refreshing and not too fishy seafood sharing dish. 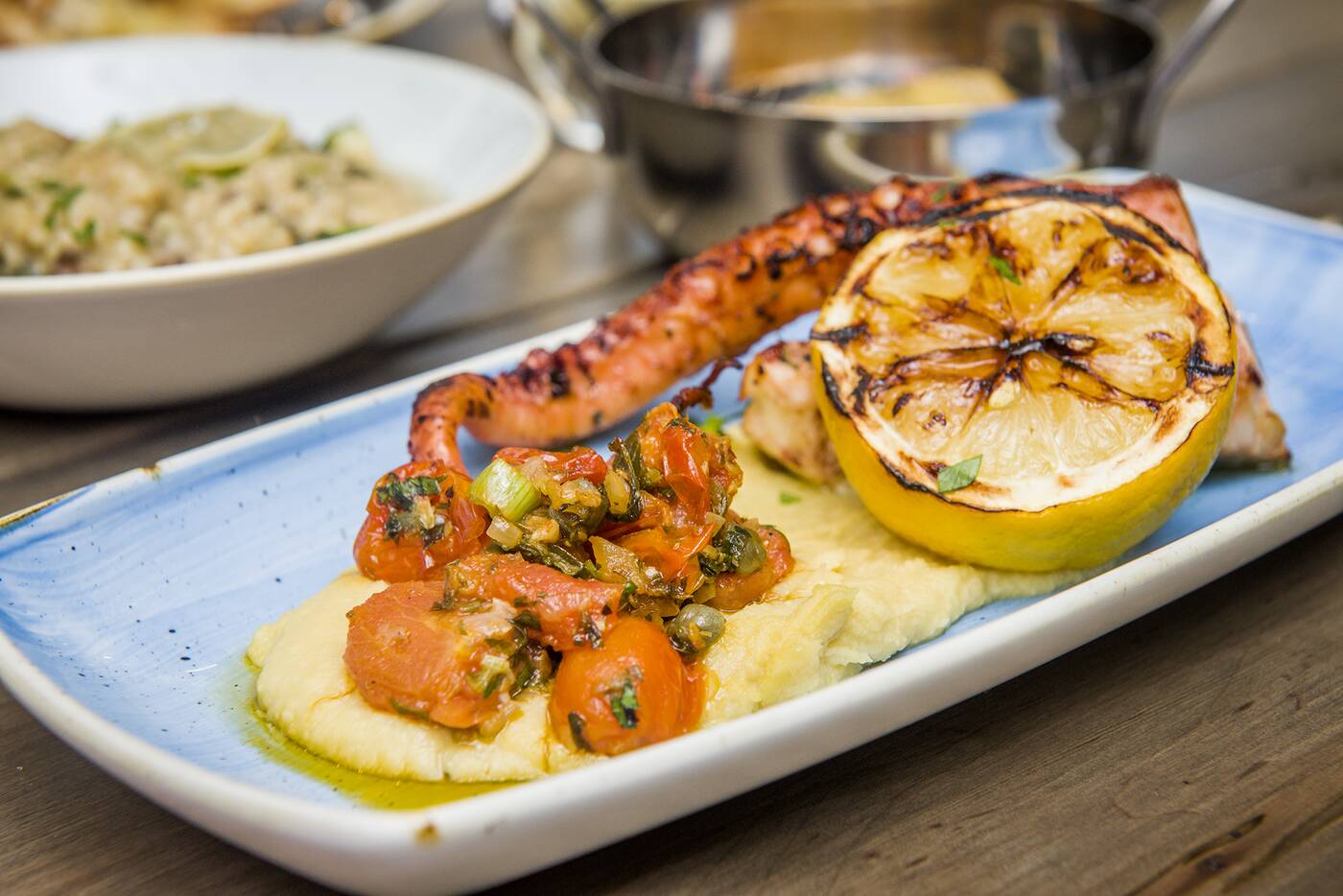 Htapodi ($22) is a dish of thick grilled octopus tentacles draped over a puree of fava beans sourced from Santorini.

Like many, the tentacle is crispy at the tip but gets chewier and tougher towards the end, but the earthy puree topped with sweet cooked-down cherry tomatoes and fried capers almost outshines it. 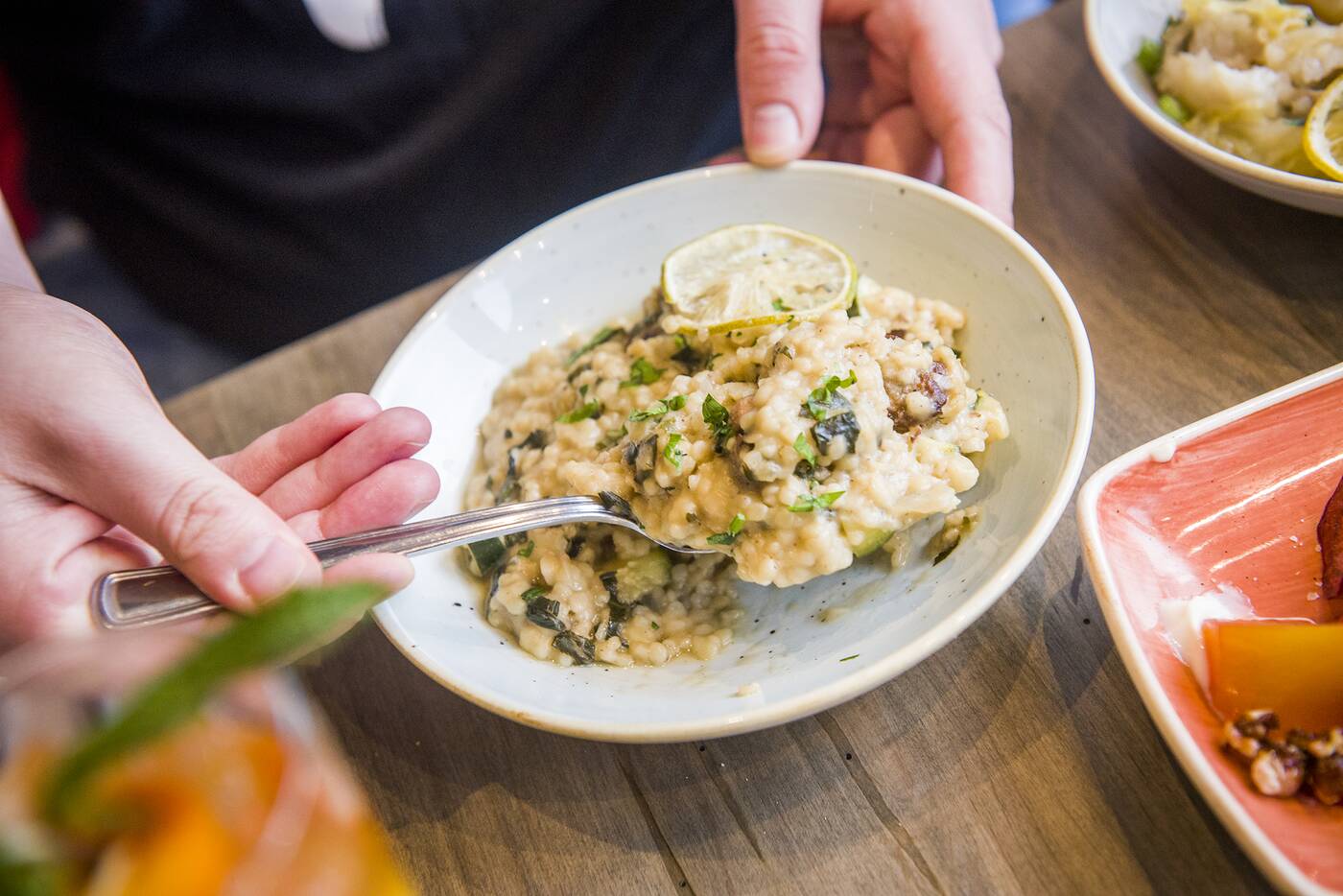 Xinos Trahanas ($13) is a sleeper, an ancient homestyle dish of sour cracked bulgur and yogurt invented to utilize sour milk curds before refrigeration. The porridge-y, almost risotto-like grains are amped up by mushroom broth, basil, and delicious zucchini and village leek sausage. 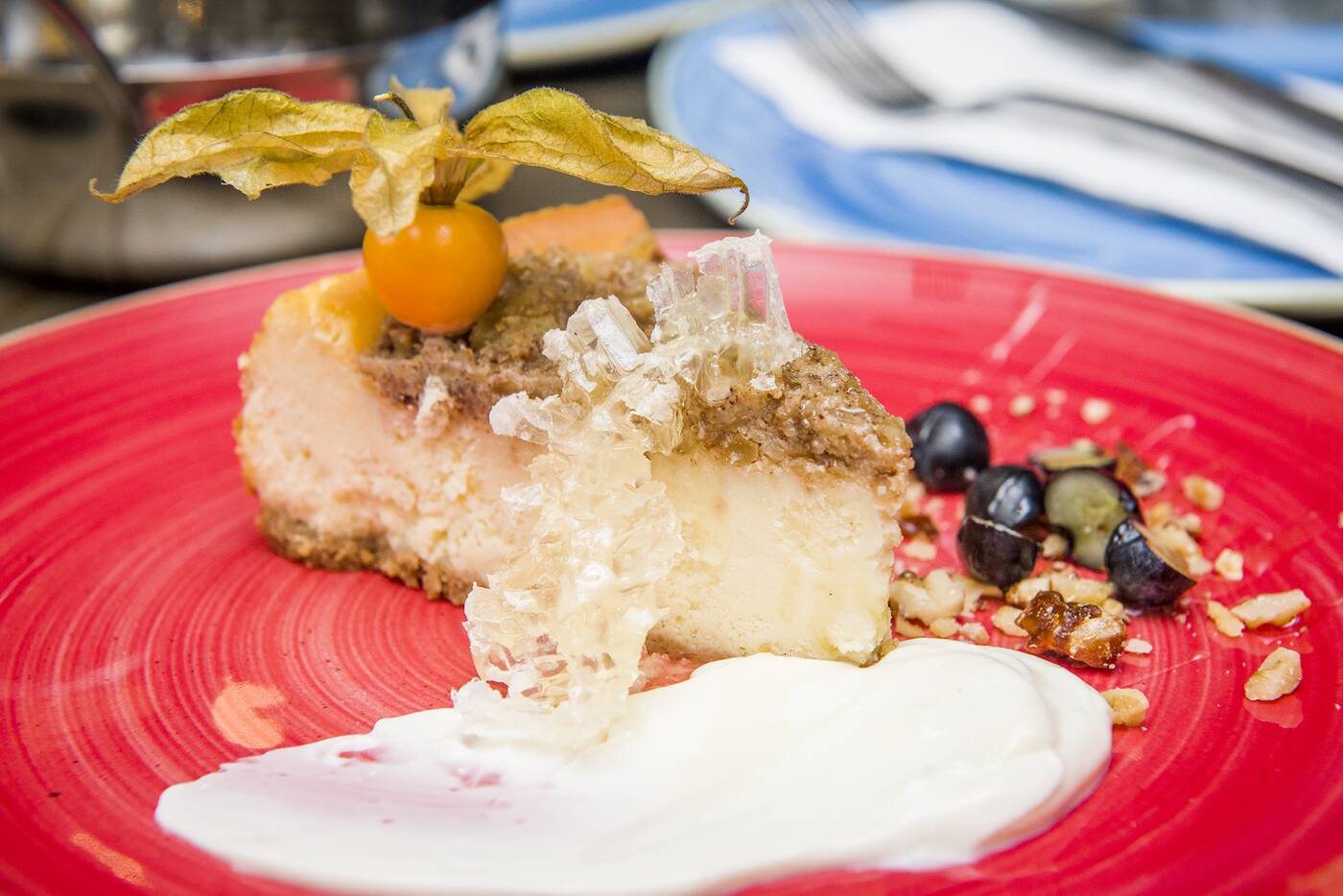 A baklava cheesecake made in house by the pastry chef behind Staij & Co runs around $7. It’s topped with everything that would usually go in baklava like honey and walnuts, served with a honey yogurt and honeycomb. 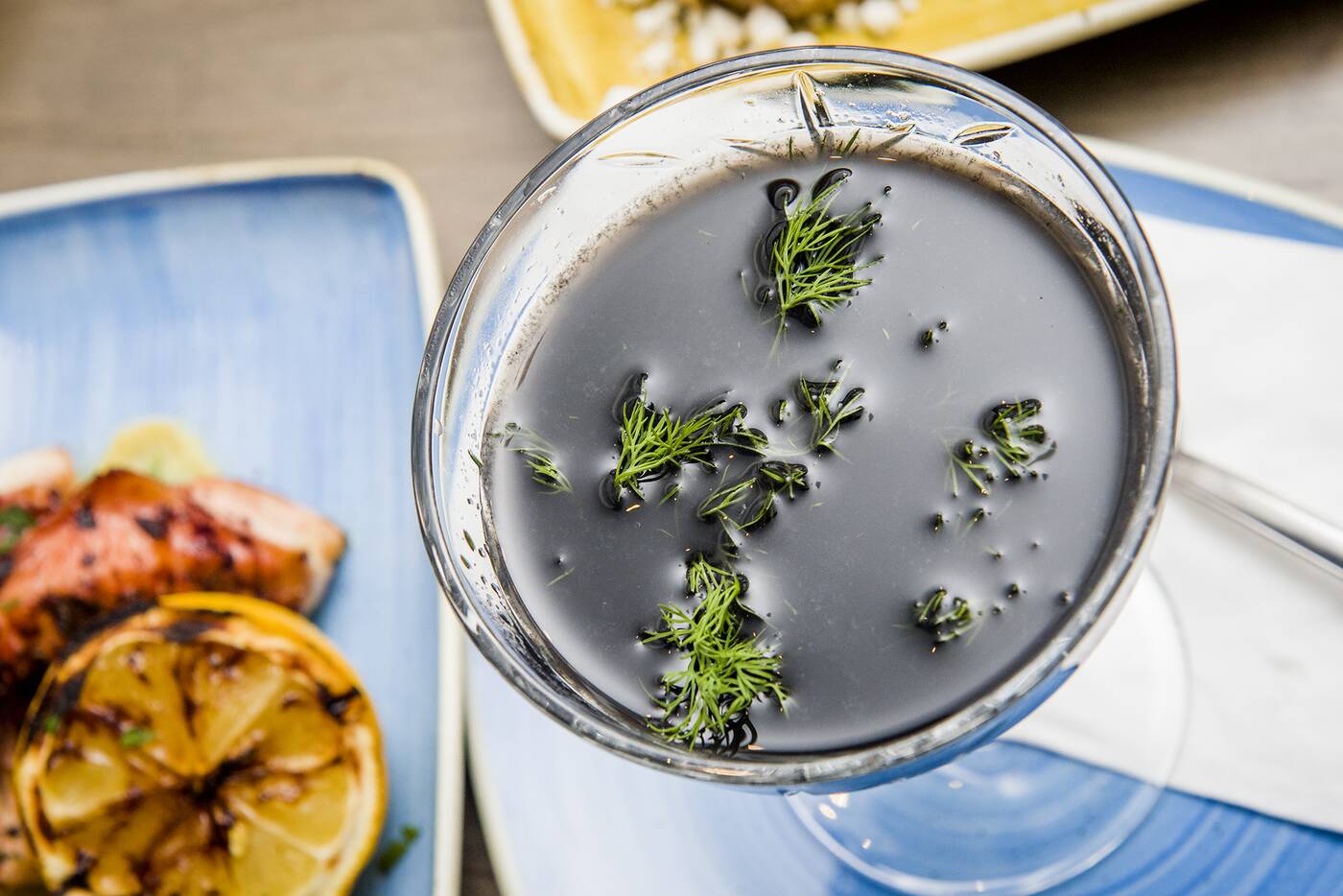 A Squid Ink Martini ($16) is made jet black with house squid ink syrup, gin, Tsipouro (a relative of grappa and ouzo) with anise and lemon juice, which provides most of the citrusy flavour that contrasts with the cocktail’s witchy look. 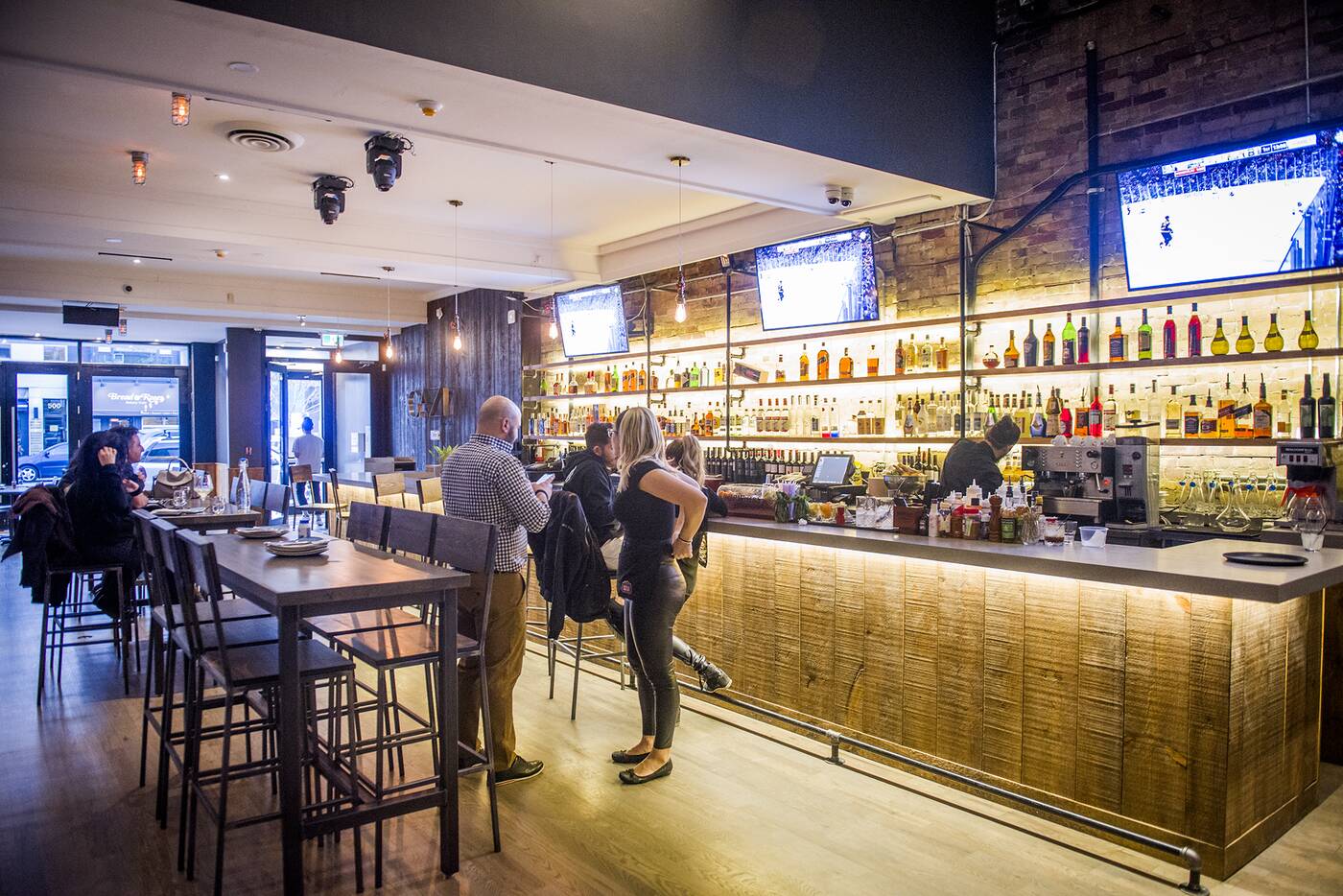 To say the restaurant is spacious is an understatement: it seats hundreds, with an upper level and a patio. 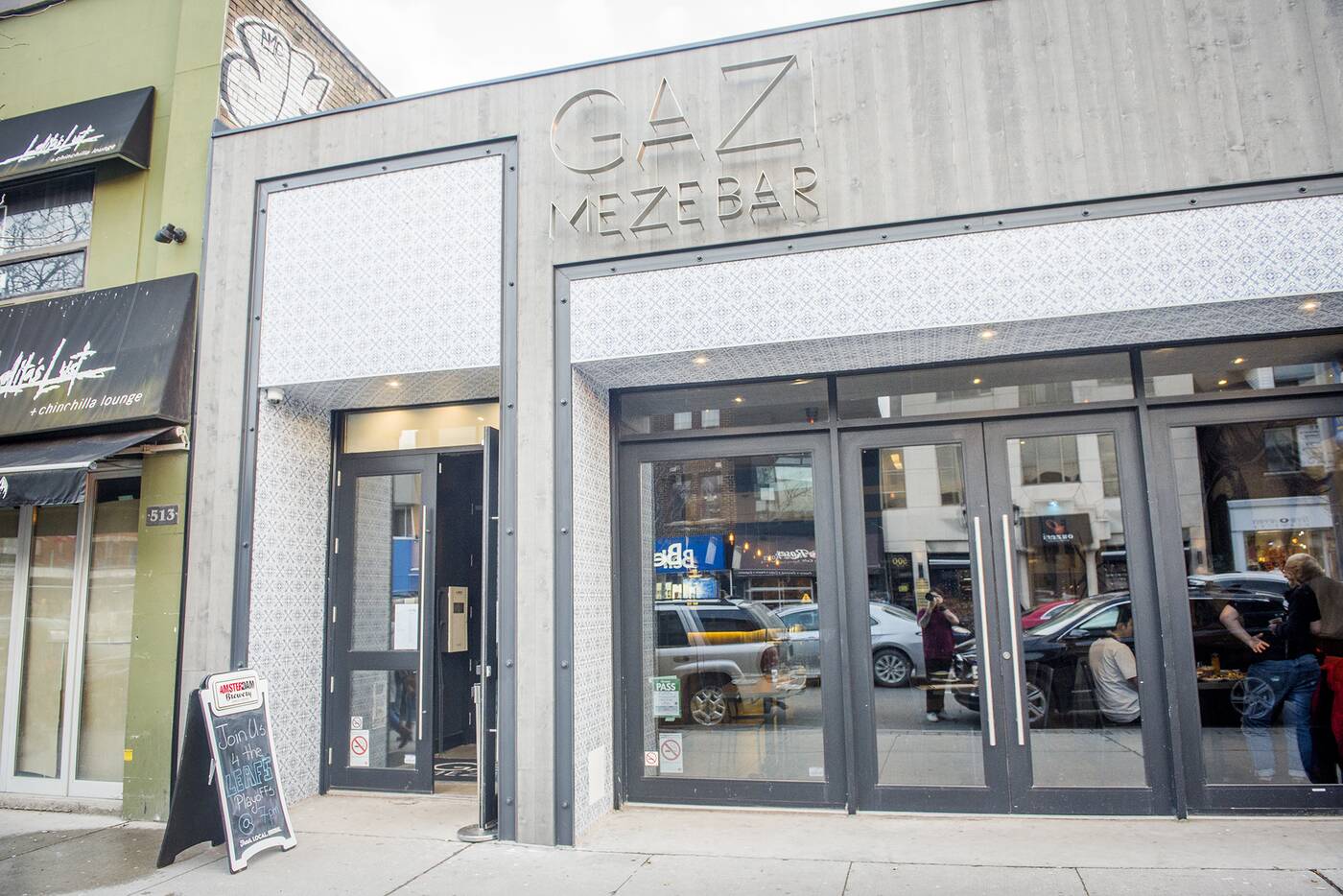