Fusia Dog has set up shop on Duncan and Queen promising a new type of haute dog -- a multicultural one. A distinct change from the usual pizza, shawarma and street meat that the Club District offers to their weekend warriors. Fusion food is nothing new - neither is marrying haute and street cuisines. But if the various cultural elements would've been separated and served as a dish unto itself; would I still enjoy it? Or more importantly, would I eat this at 2AM when I stumble home and begin my drunk grazing?

Where Fusia Dog differs from Vancouver's JapaDog or Wvrst are the cacophony of multi-cultural influences. You're not just served a German or Japanese styled hot dog but one that's globe trotting like it's been on gap year. 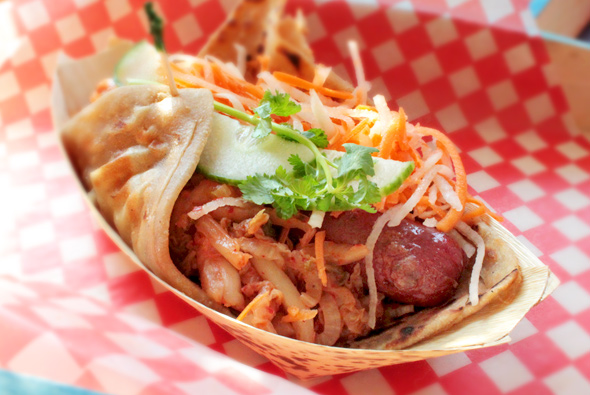 Take for example the actual Fusia Dog ($8.95): partha wrapped (similar to naan), topped with kimchi and wasabi mayo. India, Korea with a layover in Japan, all represented exhibited jet-lagged flavours that weren't harmonizing nor actually executed well. I love kimchi but I couldn't taste the fermented tartness, probably from the mayo which cleared my sinuses and seared my tongue.

The Chop Suey Dog ($6.95 - top photo) consisted of hoisin 'ketchup', stir fry veggies and topped with hickory sticks. This fared better, but then again, in my eyes anything topped with hickory sticks would - I love 'em. The dish actually had a balanced base between the sweetness of the hoisin and caramelized veggies against the savory dog and hickory sticks. A win but nothing out of the ordinary. It's worth mentioning that the dog didn't differ from each dish. All start with a Rowe Farms kosher dog (chicken or beef) or a veggie option - a solid foundation to build from. 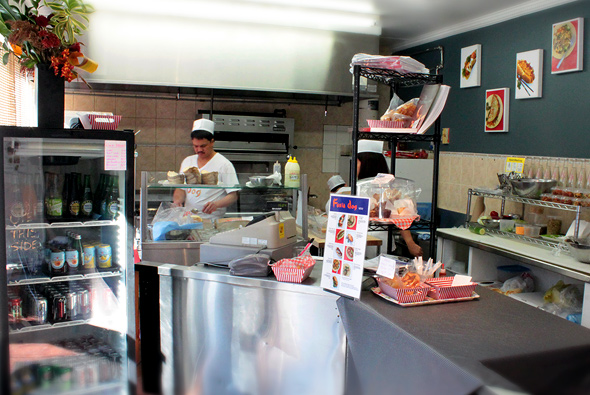 A small side is included with each dog so we tried the chipotle potato salad and the power slaw, as they were the only options. With the first I only tasted red and that was more of a visual cue than olfactory. Bland. It needed salt and actual chipotles.

Meanwhile the power slaw was not aptly named. At first glance I took the dish for a carrot salad with its over abundance of orange hued juliennes with the occasional raisin. My mistake. It was actually shredded cheese coupled with a few wilted veggies. I surrendered and laid my weapon down.

Perhaps I ordered wrong. Perhaps I was too sober. After eating here though, is this still a trend or perhaps a gimmick to have me pay 8.95 for a four dollar dog? 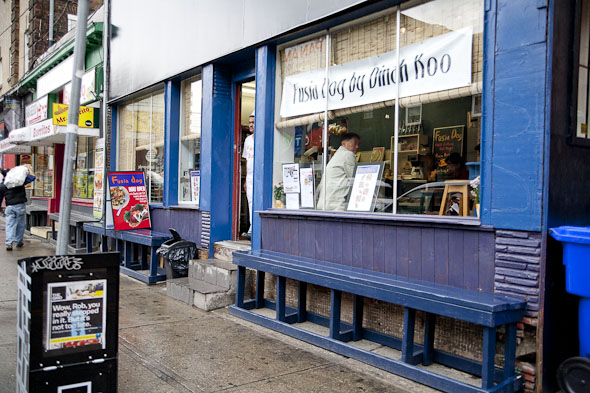