Free Times Cafe is currently open but their offerings and services may be affected due to the pandemic. Please contact the business directly for more information about any changes. Is this your business? Please contact us if you would like to update this message.

Free Time Cafe isn't new to Toronto's ever-expanding brunch scene. In fact, owner Judy Perly has been hosting her signature Bella! Did Ya Eat? Klezmer brunch for more than 20 years.

Back in 1995, Perly was living in her late mother Bella's apartment in the Bathurst and Eglinton area and she wanted to reinvigorate the now more than 35-year-old Free Times Cafe. Without children of her own, she also sought to introduce customers to her culture. "I'd like to have that feeling of being a Jewish mother," she says. So, she brought Jewish-style food into her restaurant. 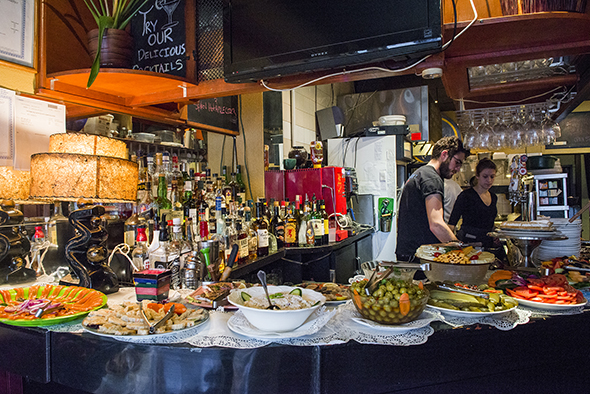 On Sundays, Perly commands the front-of-house, shepherding customers to their tables after looking up their reservations in her over-sized book. 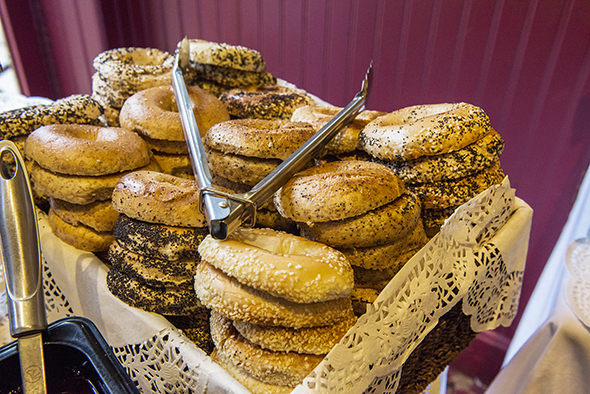 She and her staff pile buffet tables, located in the main bar area, with classic Ashkenazi dishes. To me, it's comfort food at its finest with deep fried potato latkes, cheese-filled blintzes (they're kind of like Jewish crepes) and a pile of St. Urbain's Montreal-style bagels (and schmear). 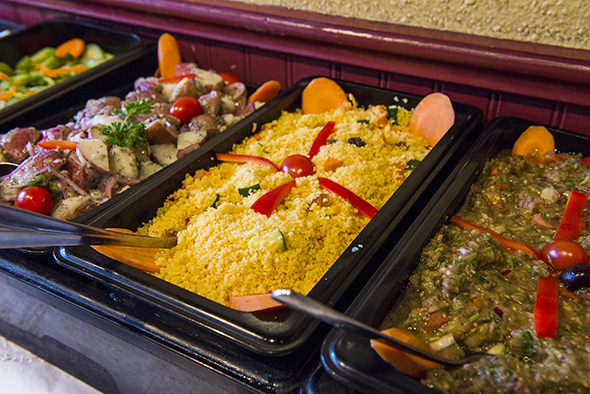 This pescatarian-friendly meal ($21.95) also features scrambled eggs with lox, two types of herring and made-in-house gefilte fish with pink horseradish on the side. To lighten up my carb-laden-load, I choose from a few of the freshly made salads. 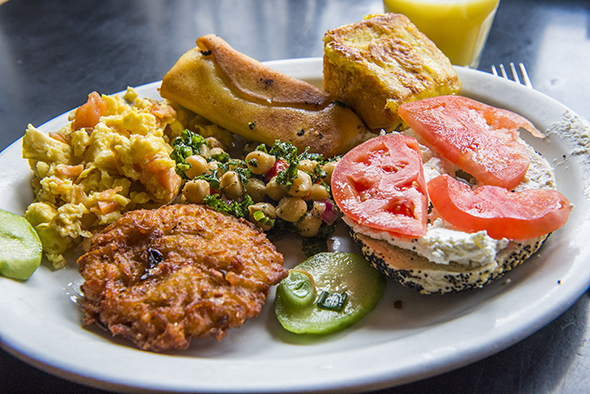 Once my plate is groaning under the weight of my food, I grab a seat in the Bella's Bistro, which Perly added to Free Times 17 years ago. 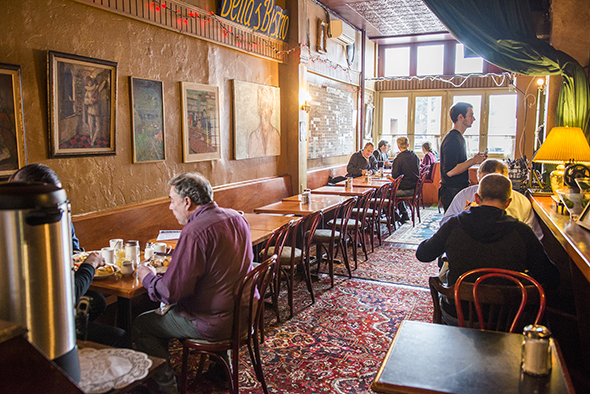 Whenever I dine-in, both the bistro and back music room fill up with the obligatory hungover twenty-something crowd as well as with families of all ages. On one Sunday, for instance, Perly points out a woman wearing a tiara - she's celebrating her 84th birthday. 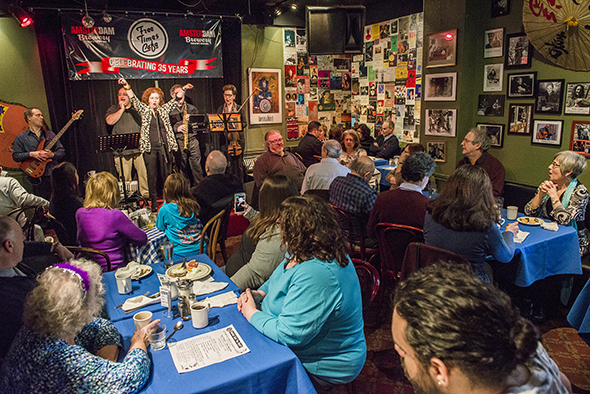 Mid-way through each seating - there's one at around 10:30 a.m. and another at 1:15 p.m. - Judy gets up on stage and leads us through a series of collective "Oys!" Yes, it's a choral exercise and yes, everyone eagerly participates. Perly encourages us to use our diaphragms as we shout out "Oy!" "Oy gevalt"! "Oy vey ist mir" and "Oy a broch!"

"The movement actually pushes the blintzes and latkes down," she says to the crowd. 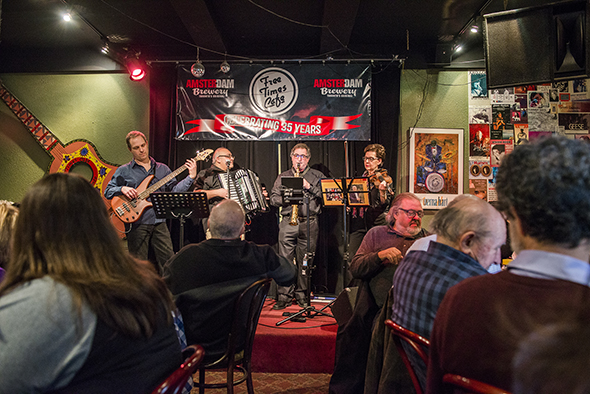 Afterwards, it's time for live music and Perly books a different group each week. Hamilton's Touch of Klez plays on my most recent visit, but I've also seen Yiddish cabaret performers serenade the house with tunes such as "Bei Mir Bistu Shein" and "My Yiddishe Momme."

I usually dance my way back to the buffet to refuel with more blintzes, sour dill pickles and of course, dessert. 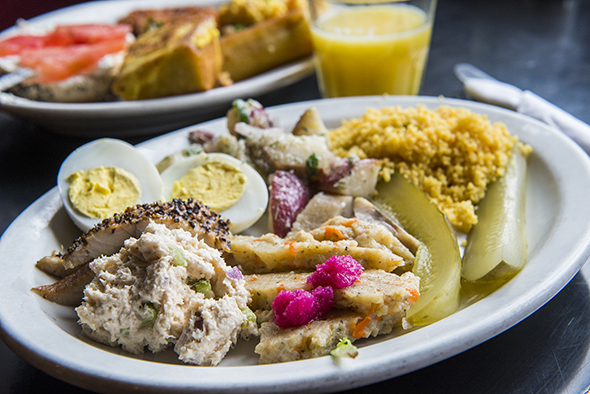 During the meal, servers weave their way through the tightly packed tables and chairs to bring diners coffee, tea and orange juice, which are all included in the buffet price.

While walk-ins are welcome, you should probably make a reservation in advance, especially if you want a seat near the stage. 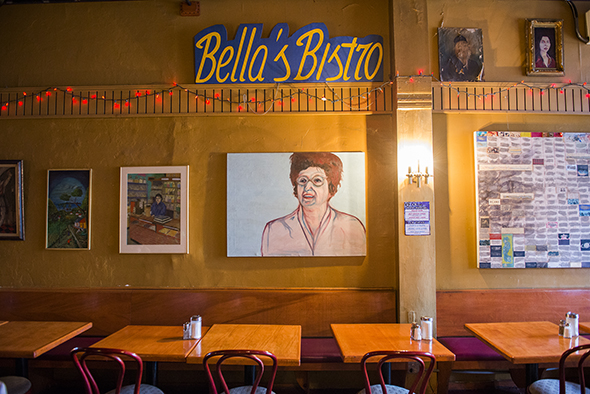 Outside of brunch, Free Times Cafe features live music most nights of the week. And, it's always open late with a diverse menu featuring bar food staples - think nachos, poutine and burgers - as well as dishes such as matzah ball soup and latkes.

But Perly says for her, it's all about Sundays. "It's the joy of my life." 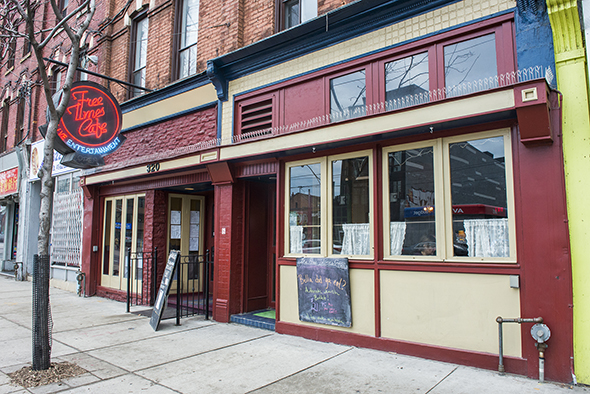