Tabule, the popular chain of elevated Middle Eastern restaurants in Toronto, has a location in Bayview Village Shopping Centre.

They’re serving up their typical fare of falafel, salads, and feasts of side dishes, but with a few slight additions to the cocktail menu and of course, another new and stunning design by Commute. 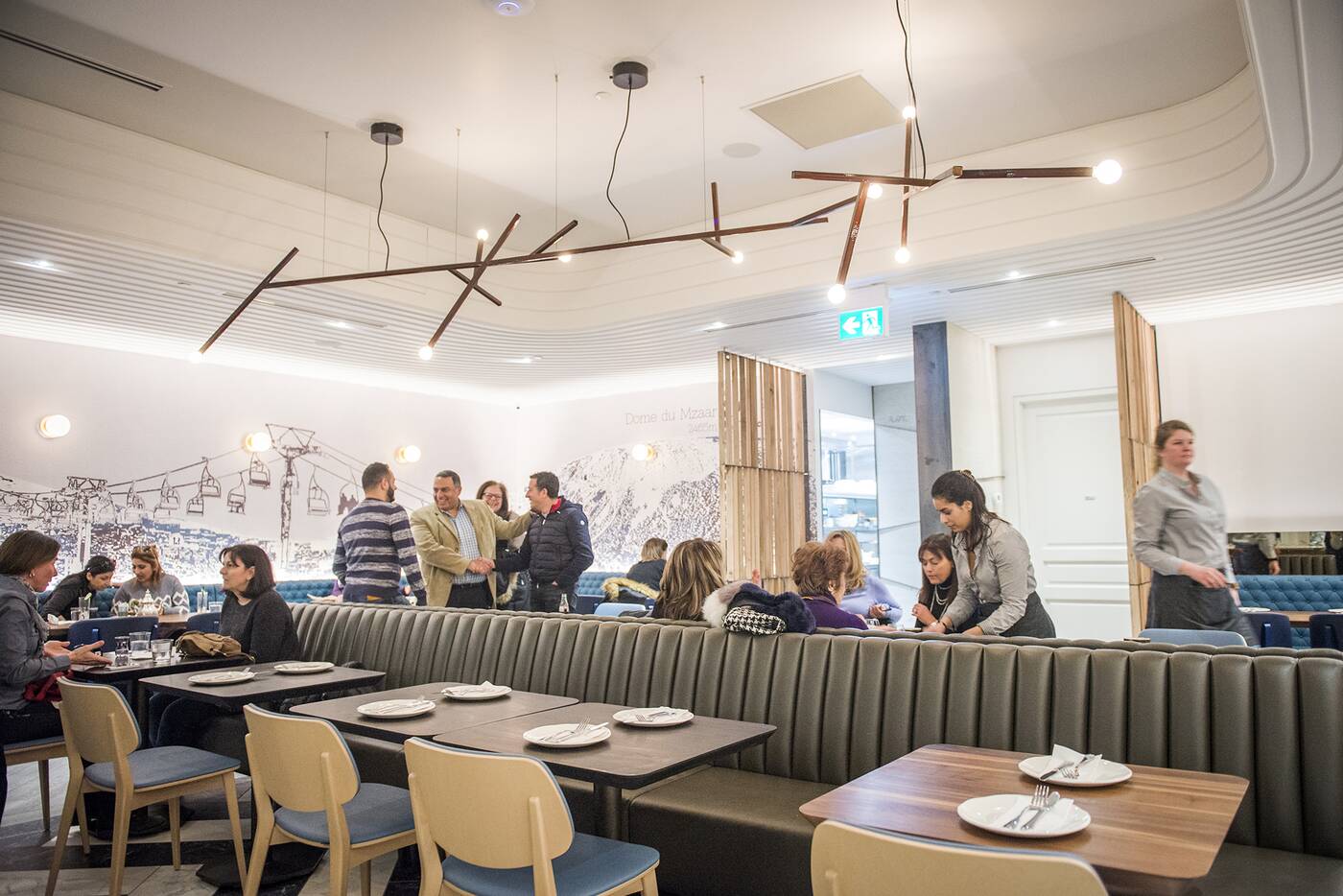 A wall design that covers an entire half of the restaurant depicts a ski hill in Beirut, like the food, meant to defy expectations about the part of the world this cuisine is inspired by. 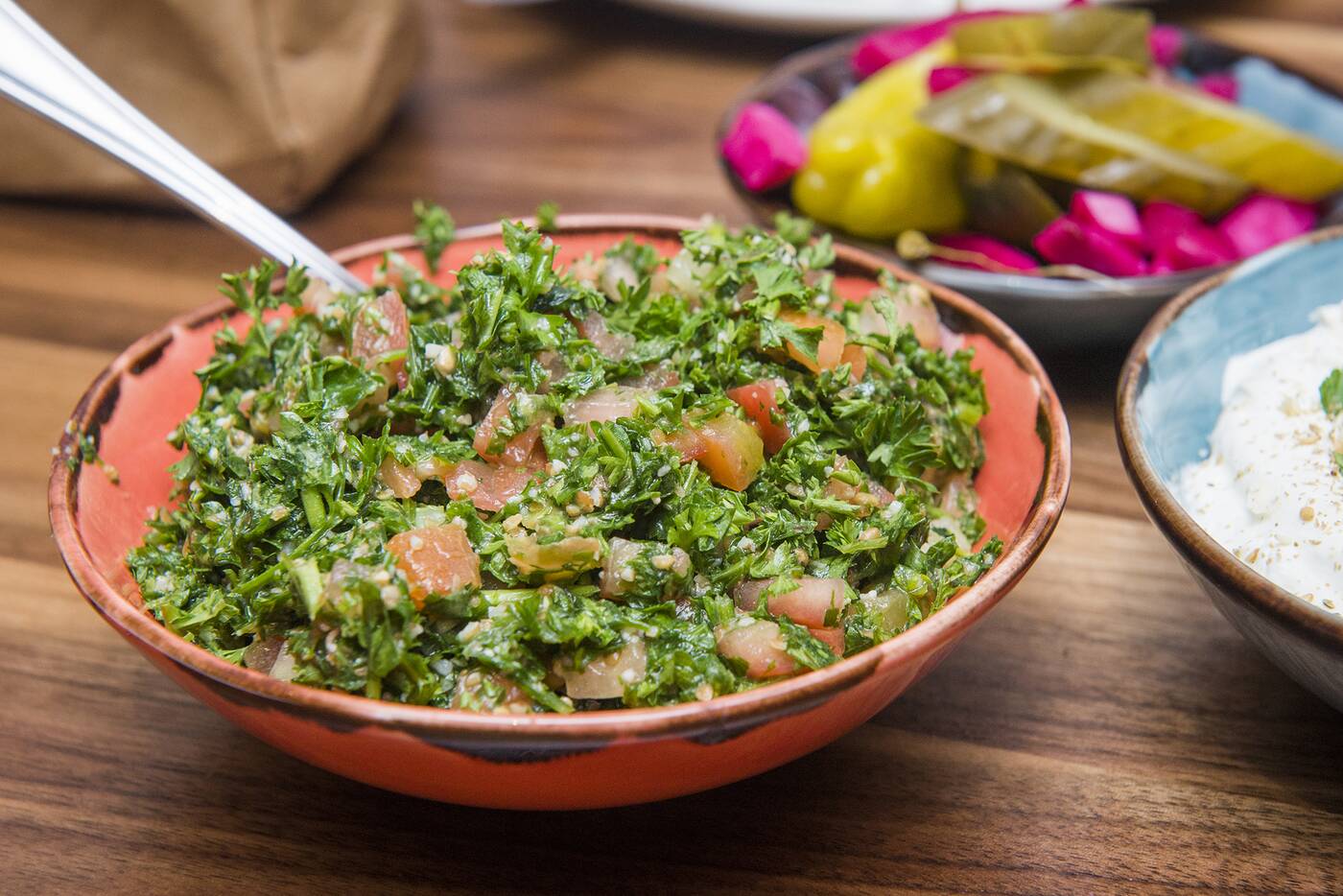 There’s the classic tabule salad ($6.50), a refreshing mix of hand chopped parsley and bulgur with tomato, onion and a bit of mint. 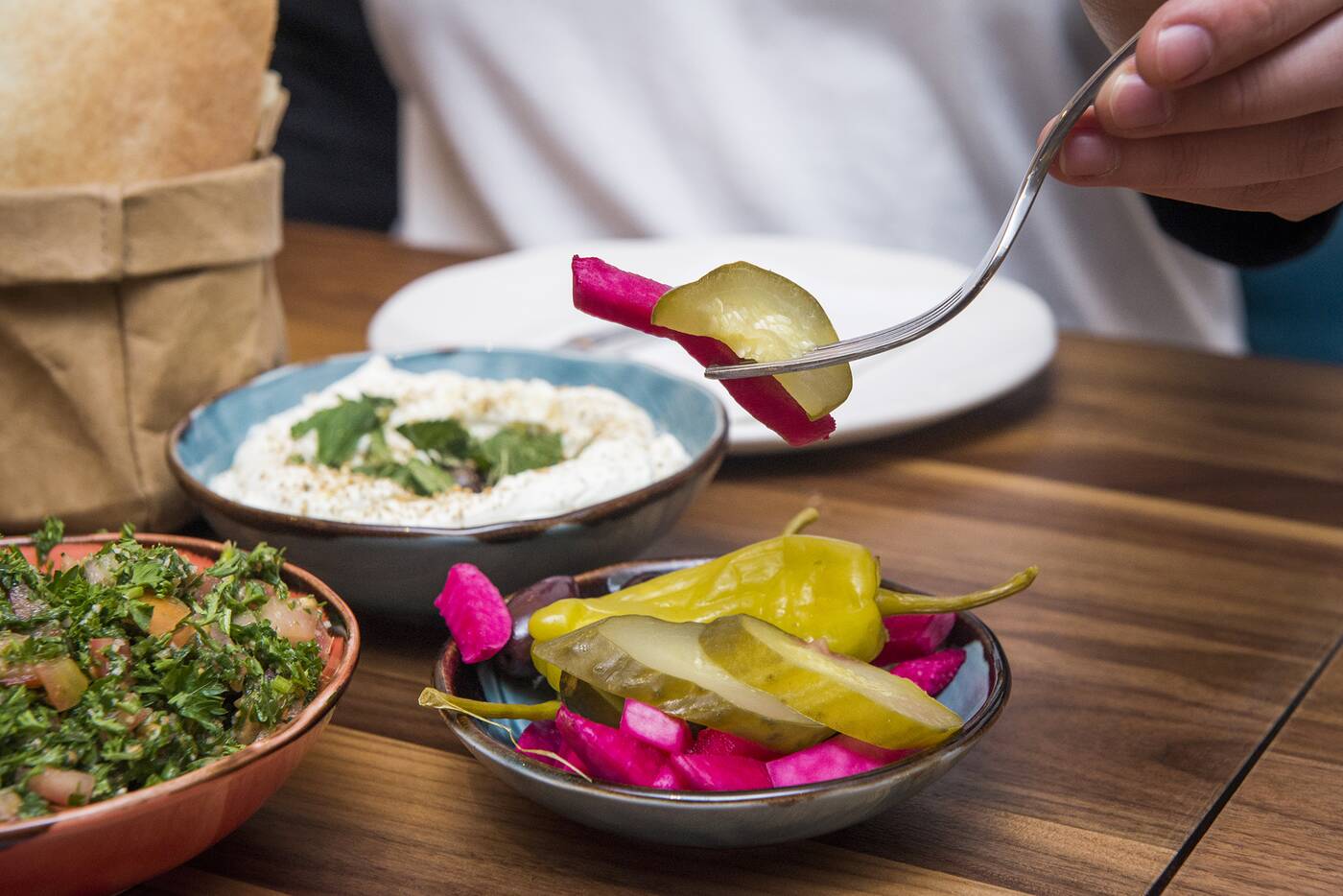 Palate-cleansing pickles ($2) are an assortment of olives, hot peppers, turnips and dill pickles. 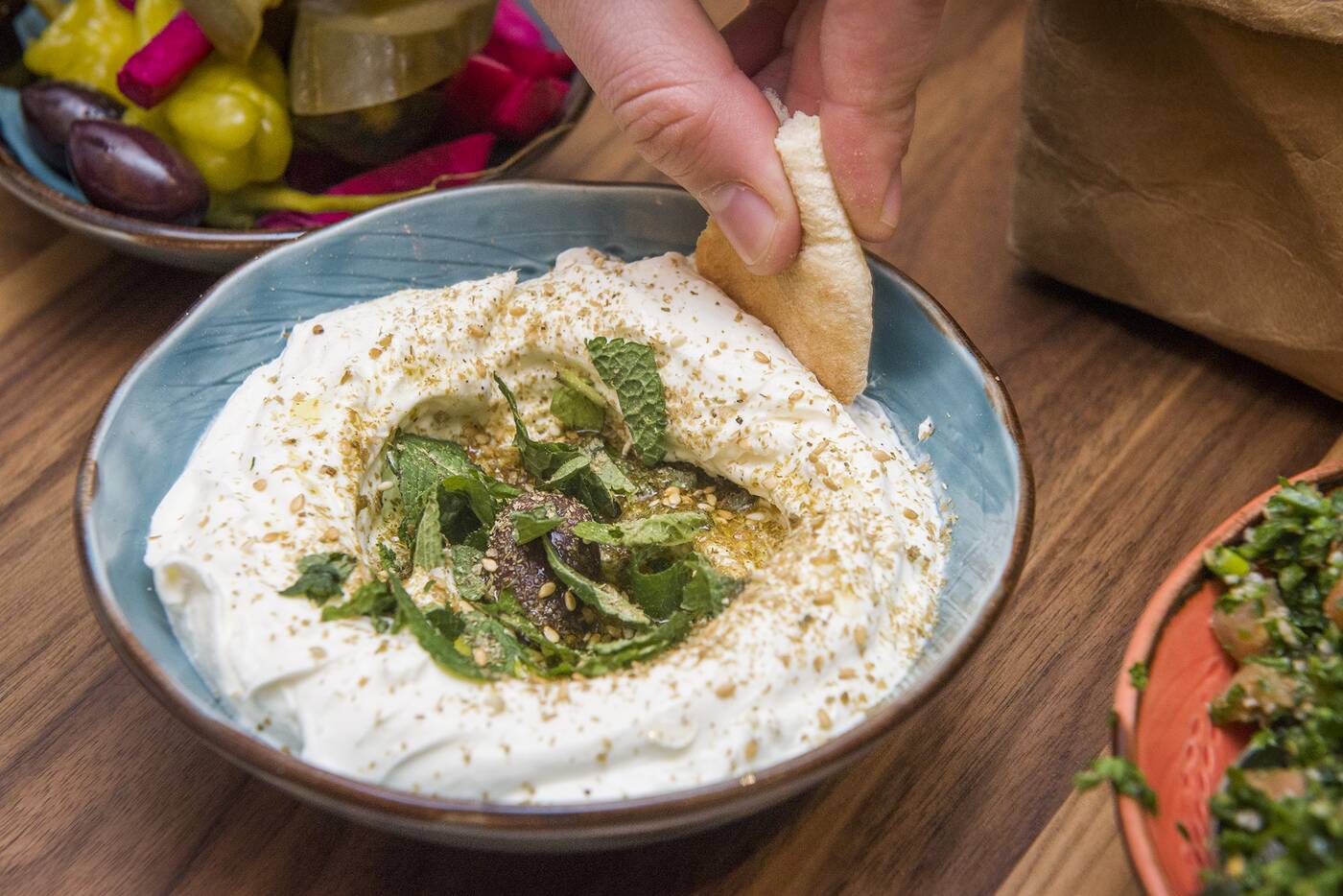 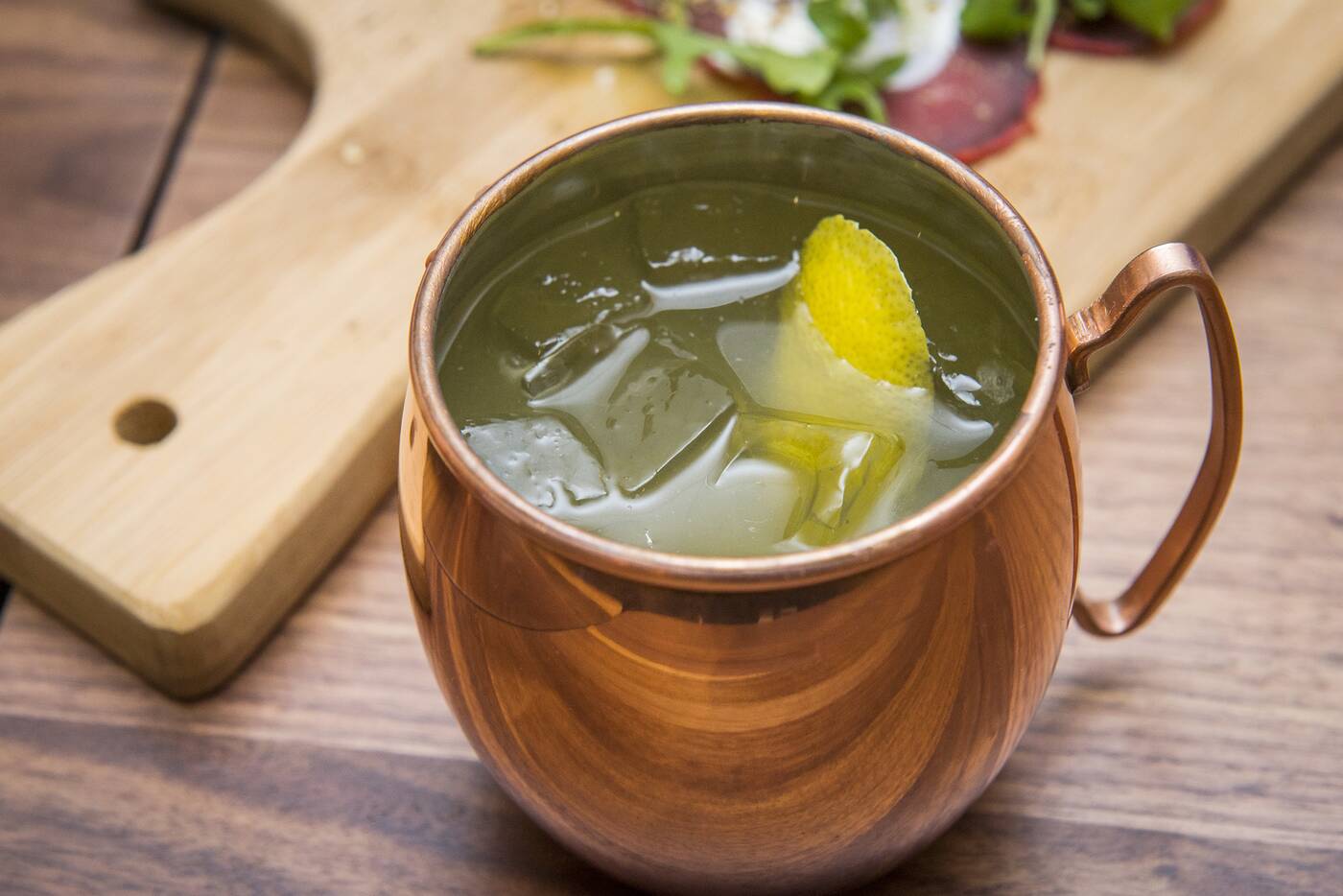 One of the cocktails created especially for this location by Tabule mixologist Nishantha Nepulongoda is the Mzaar ($13) a Moscow-mule-like combo of gin, Cointreau, lime and ginger beer that’s kicked up a notch with cinnamon syrup. 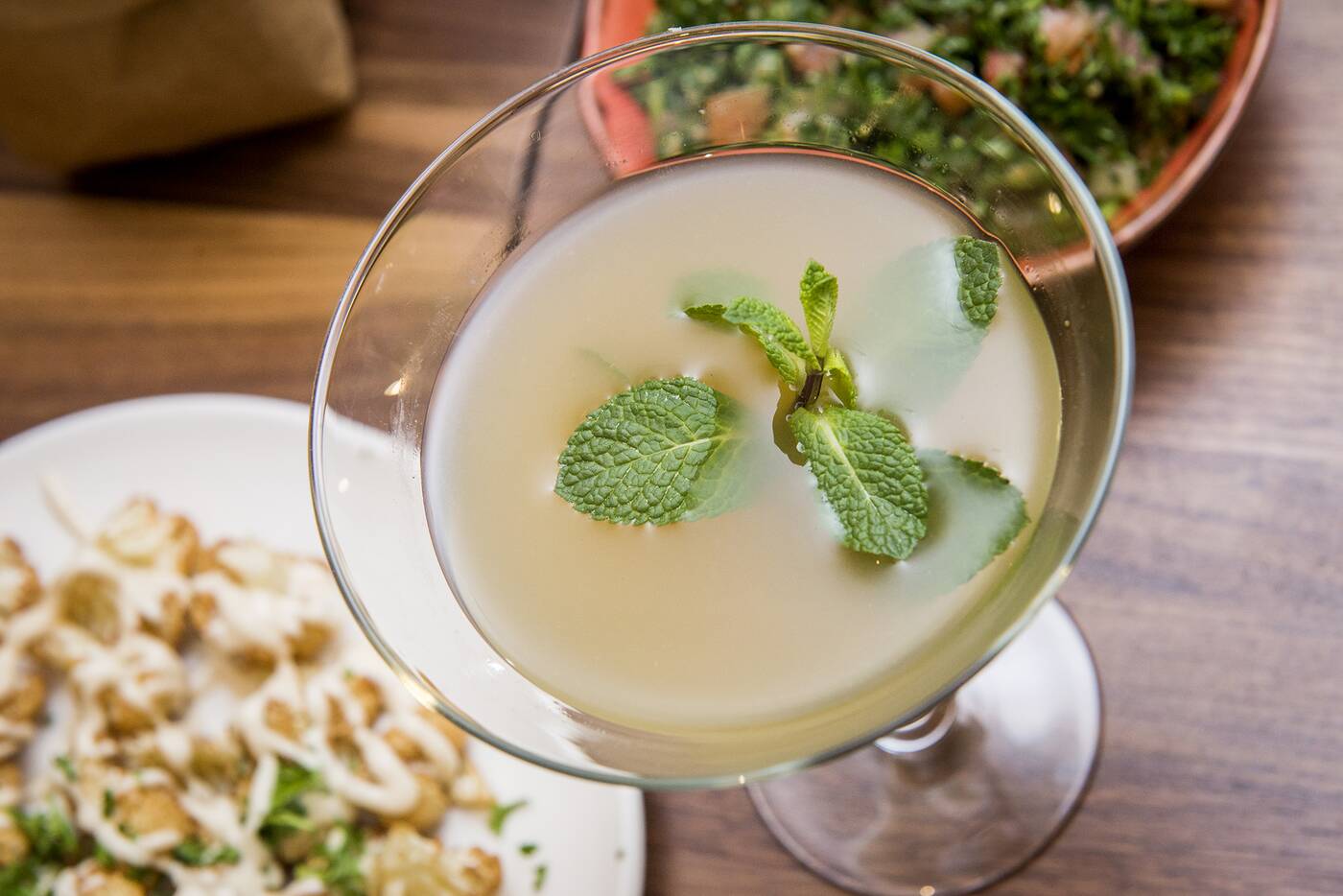 The other special cocktail here is the Arabian Chiquita ($13) made with Tromba tequila, Cointreau, fresh ginger, lime, grapefruit and fresh mint. It packs less of a punch for me than the cinnamon cocktail, but it’s meant to, knowing folks are going to be in the mall during daytime.

Classic falafel ($6.50) have always been crunchy, hearty and gluten-free, drizzled with tahini. 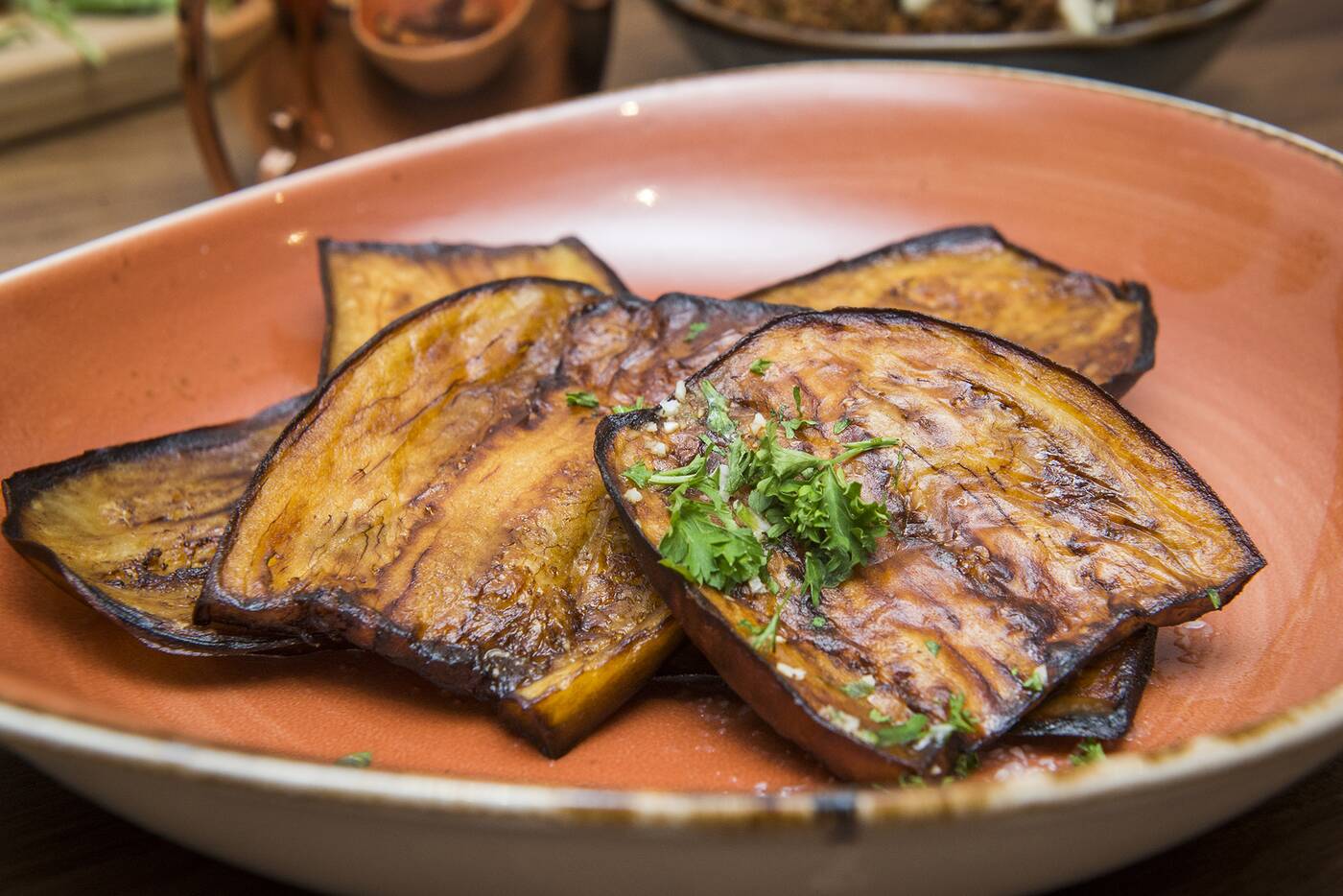 Fried eggplant ($6.50) topped with a lemon garlic dressing is simple and sumptuous. 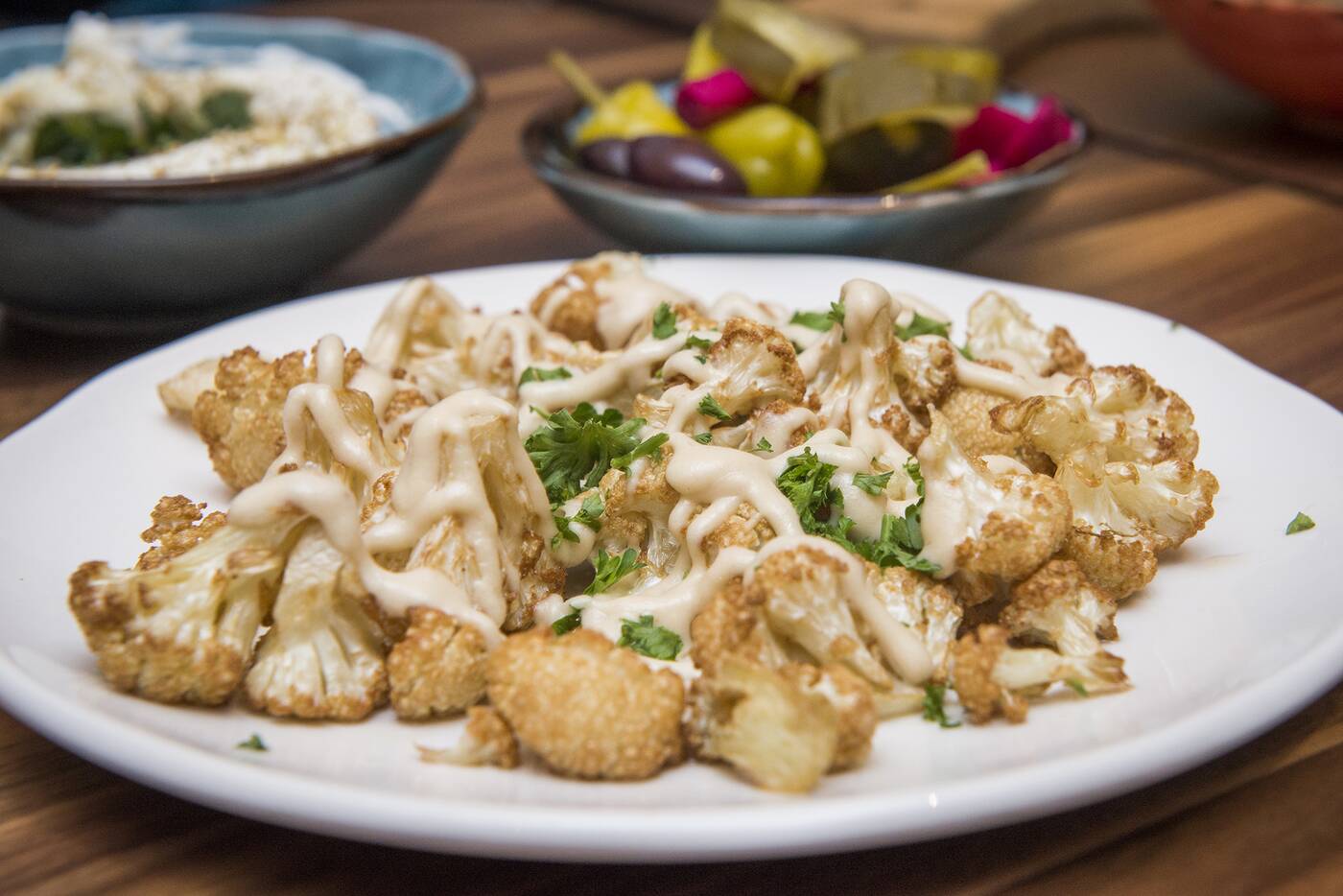 Fried cauliflower or arnabeet ($7.75) is perfect balance of oily and crispy, also drizzled with tahini. 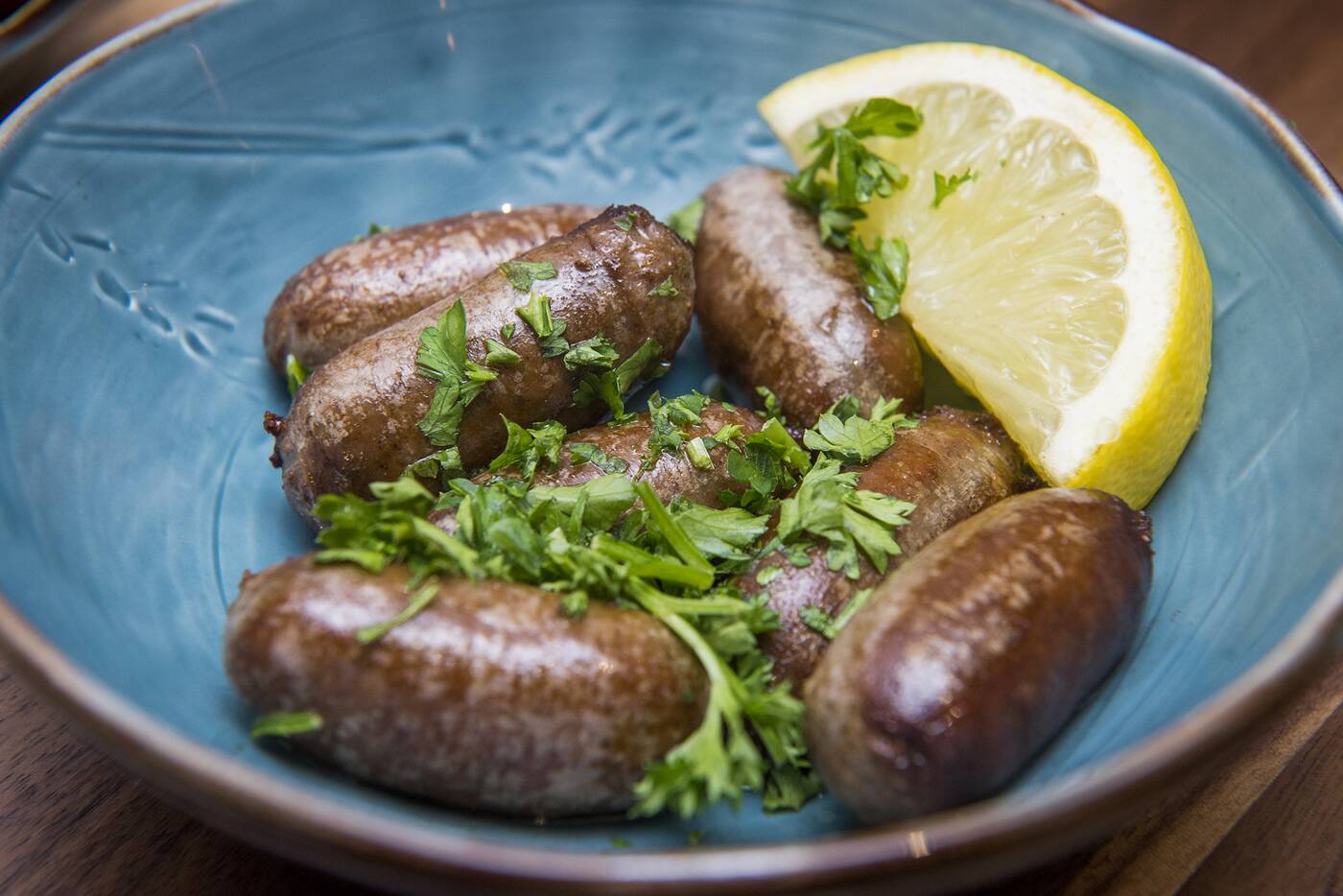 Teeny spicy sausages ($7.50) called ma’anek are a warm blend of ground beef and Middle Eastern spices, lightened by a pop of provided lemon. 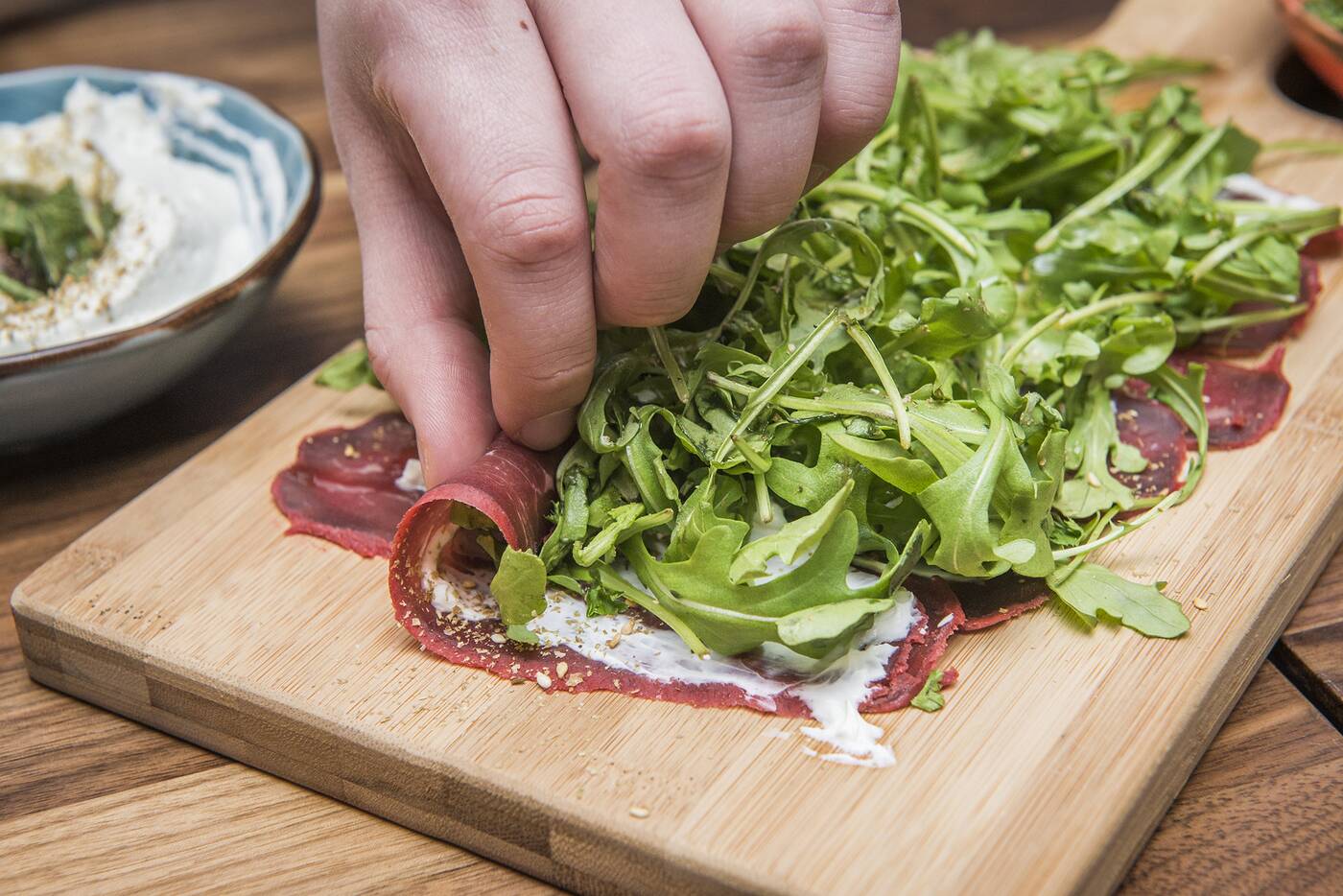 Basterma ($12) is kind of like Middle Eastern prosciutto, seasoned cured beef that here is complemented by creamy labni and a leafy pile of peppery arugula. 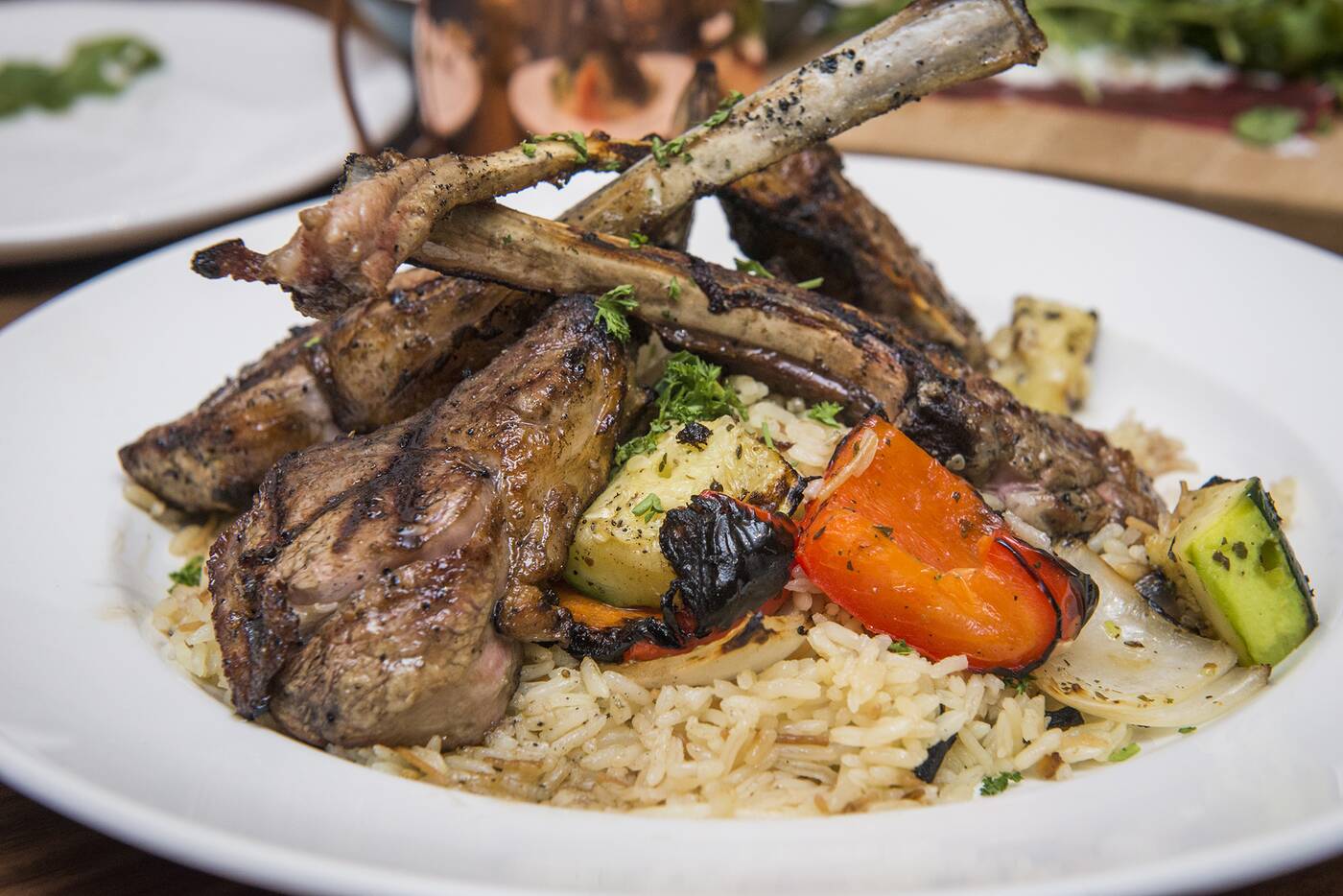 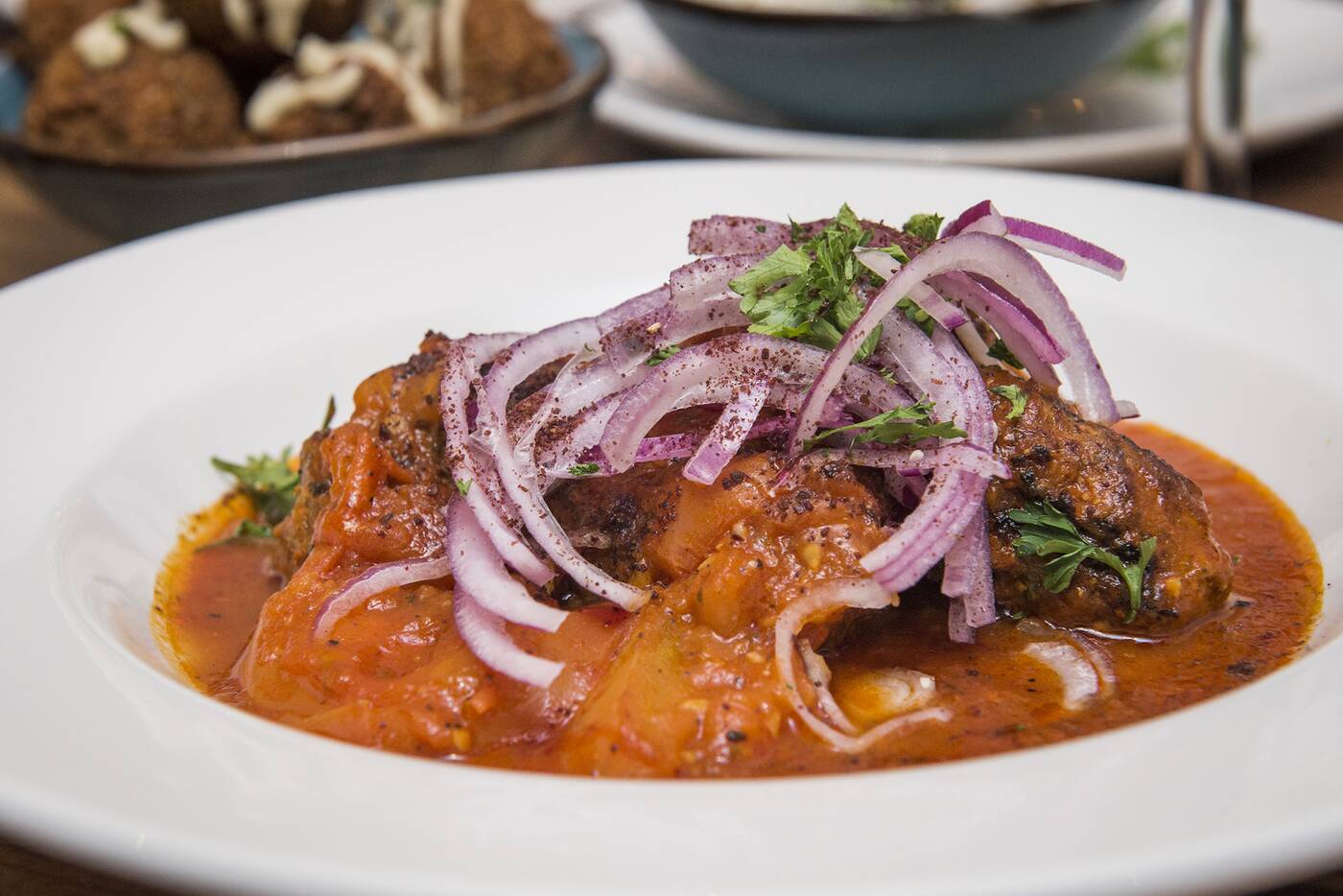 The kefta banadura ($18.95) almost reminds me of Italian, balls of ground mixed beef and lamb in a tomato garlic sauce. 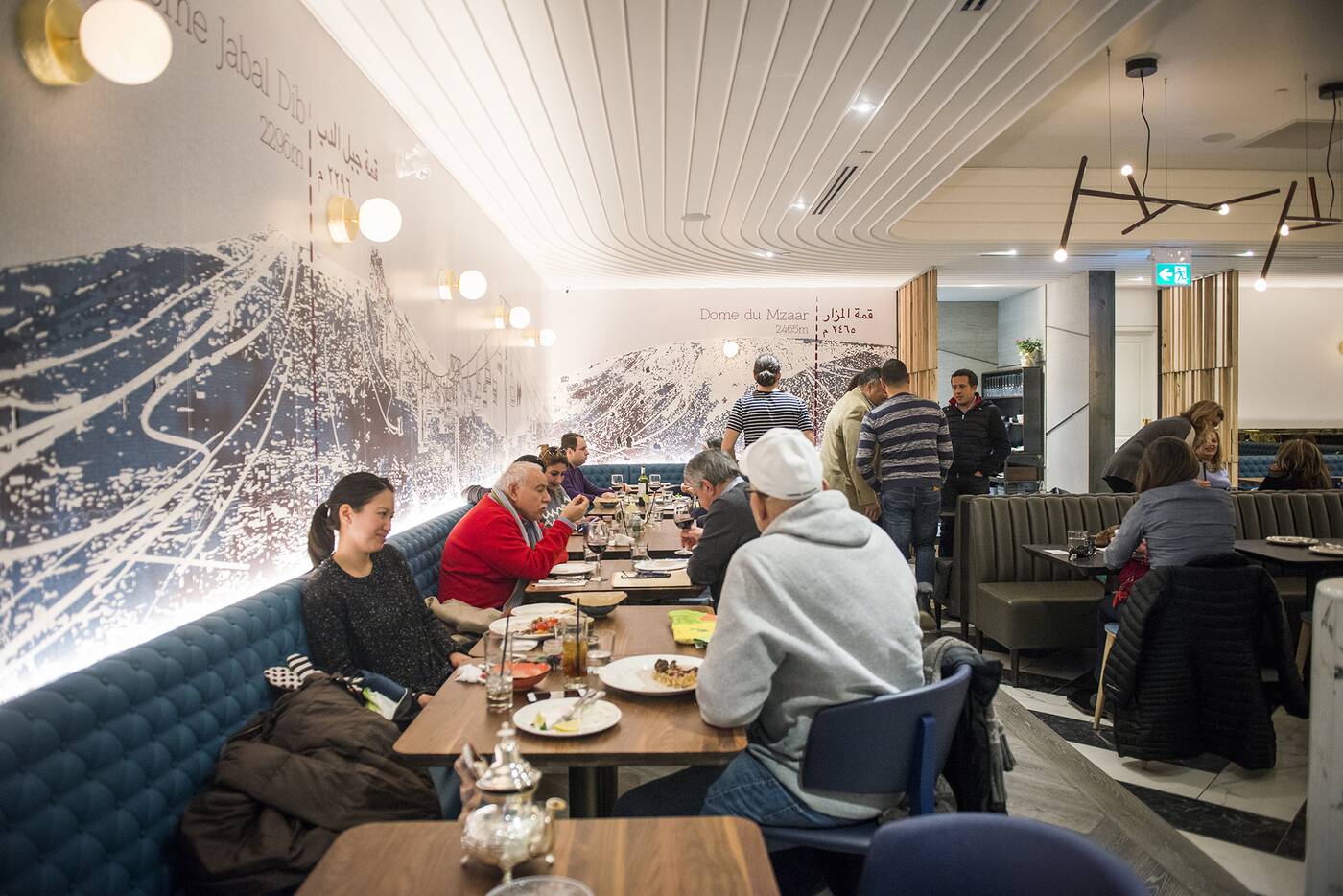 A banquette stretches around the perimeter of the restaurant in an appealing shade of teal, offset by brass, wood and marble accents. 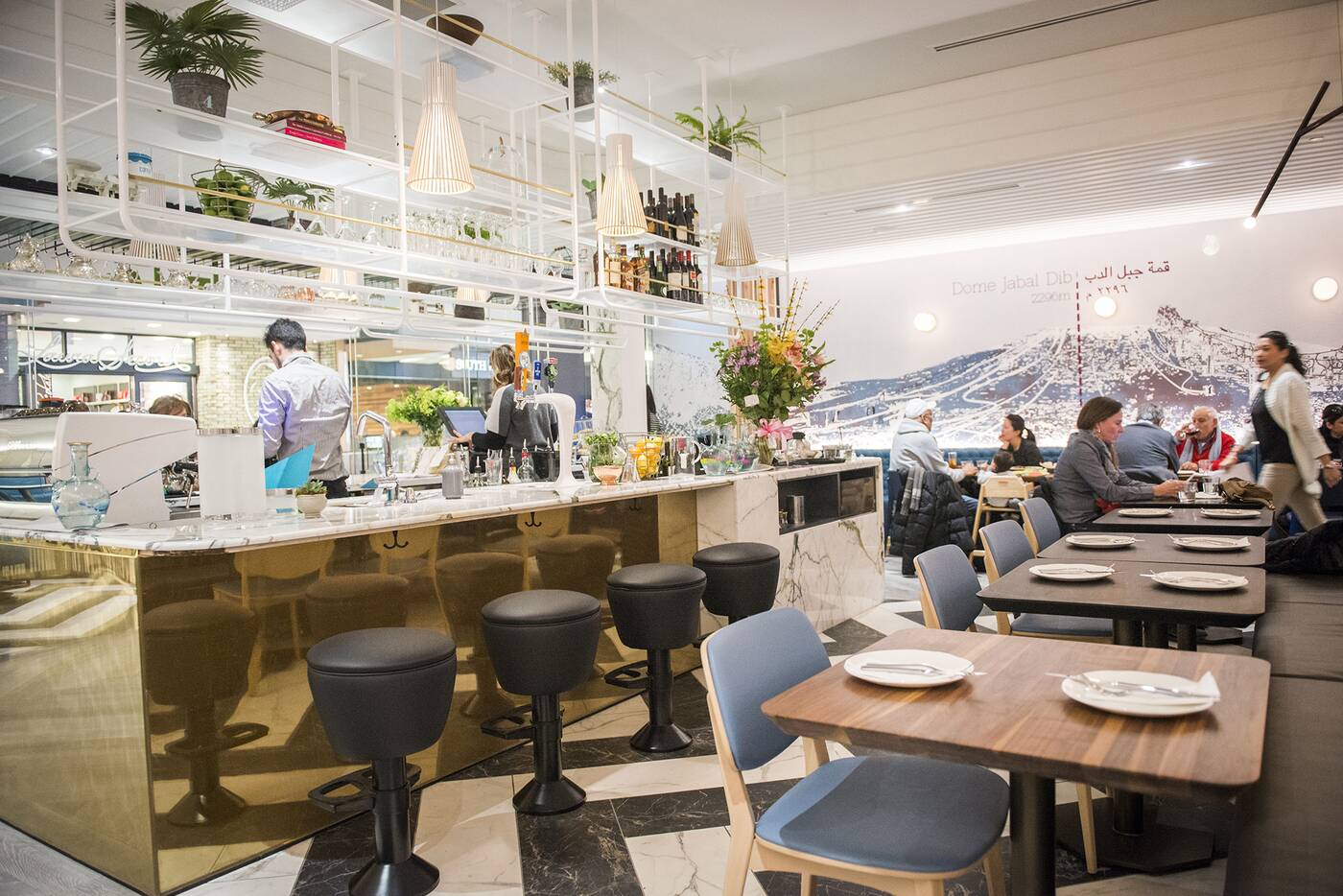 More seating fills the middle of the restaurant, with a bar island for coffee and cocktails near the front. 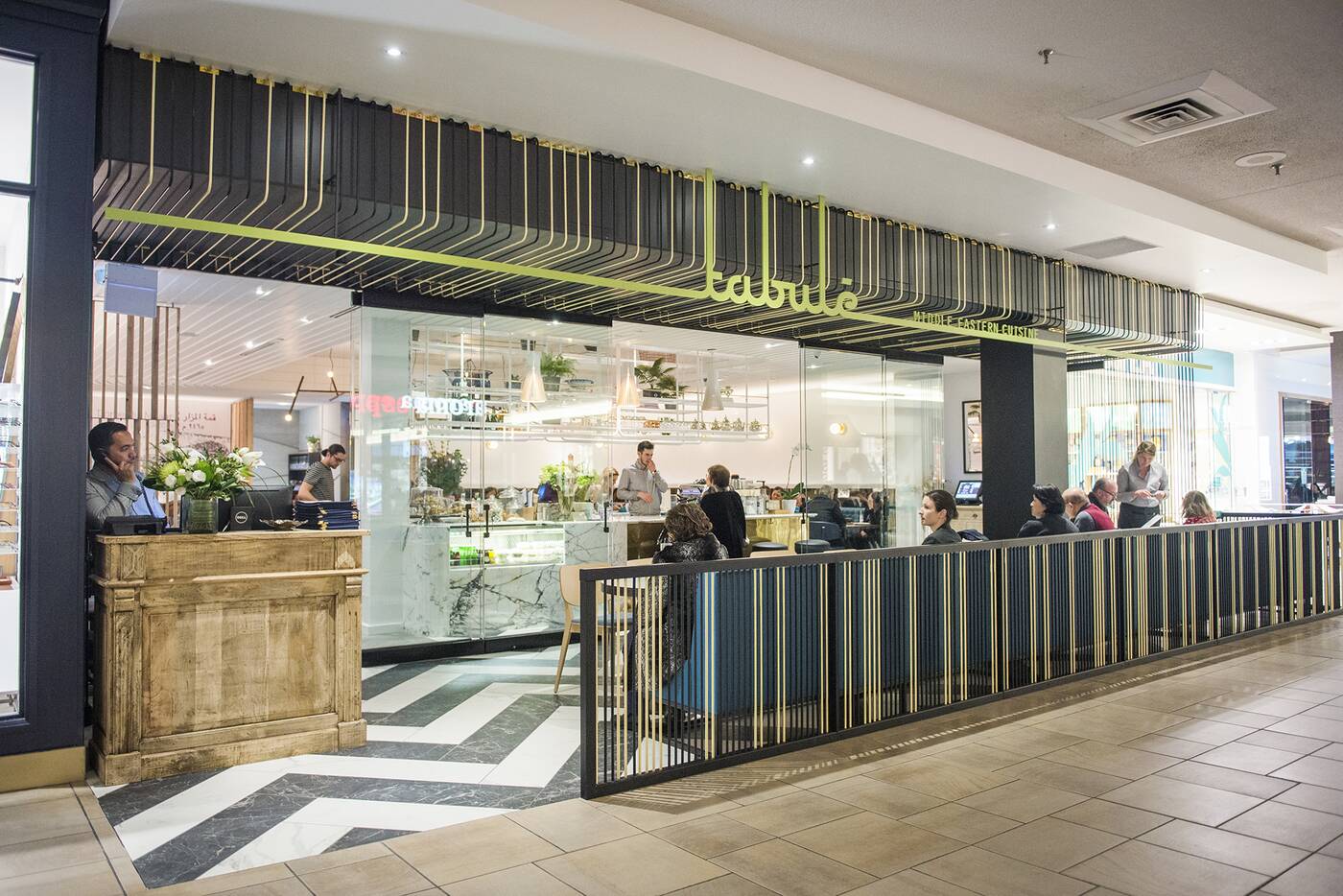