Joining the strip of subterraeneous shops in the Kensington Market Lofts, this colourful spot upkeeps 160 Baldwin's longstanding tradition of vegan businesses (it was Veggie D'Light before) with a totally meat-free menu. 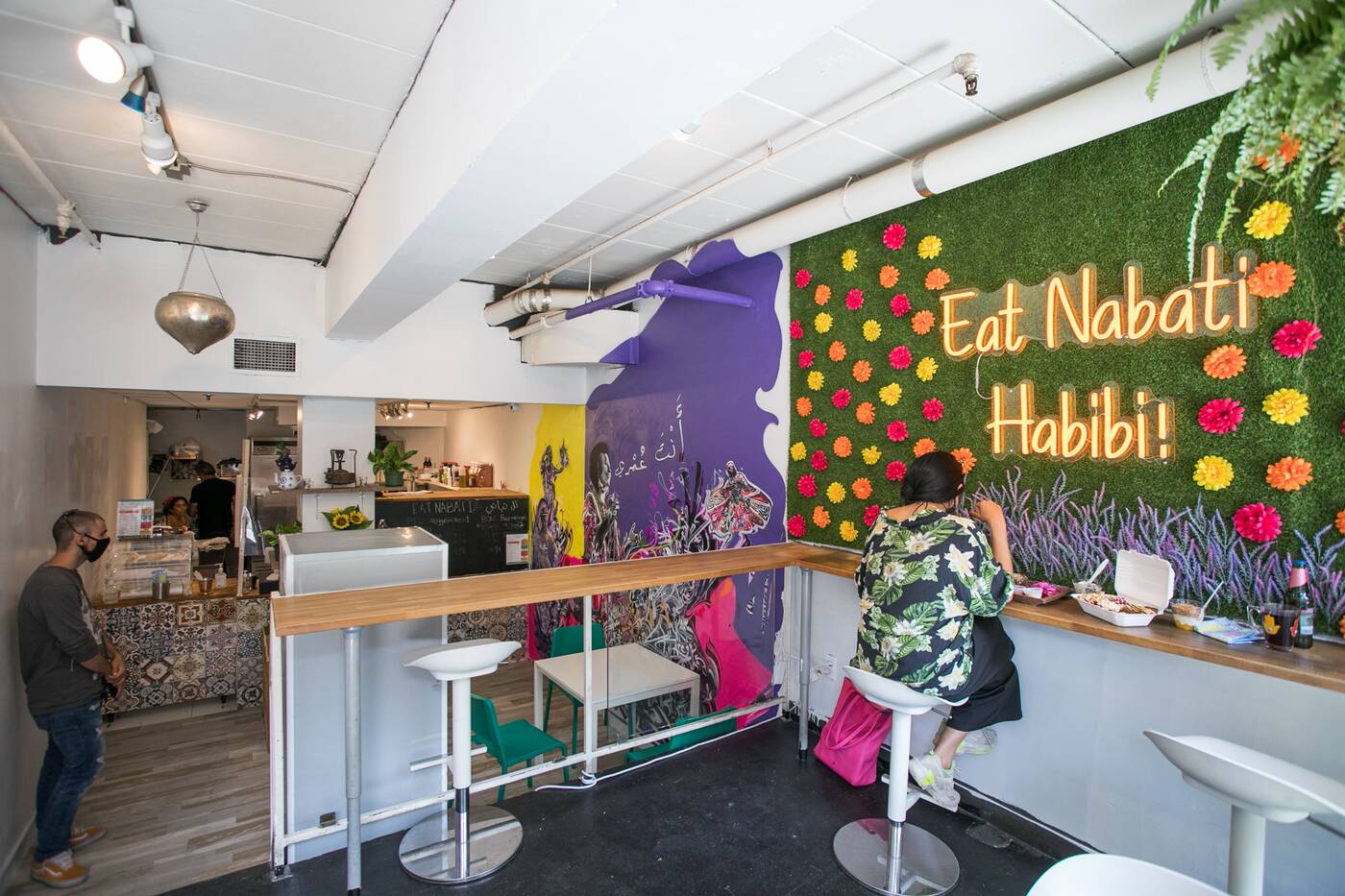 In Arabic, the term 'nabati' refers to plant-based cuisine, something that owner Israa Ali says is extremely common in Egypt where meat is actually a luxury. 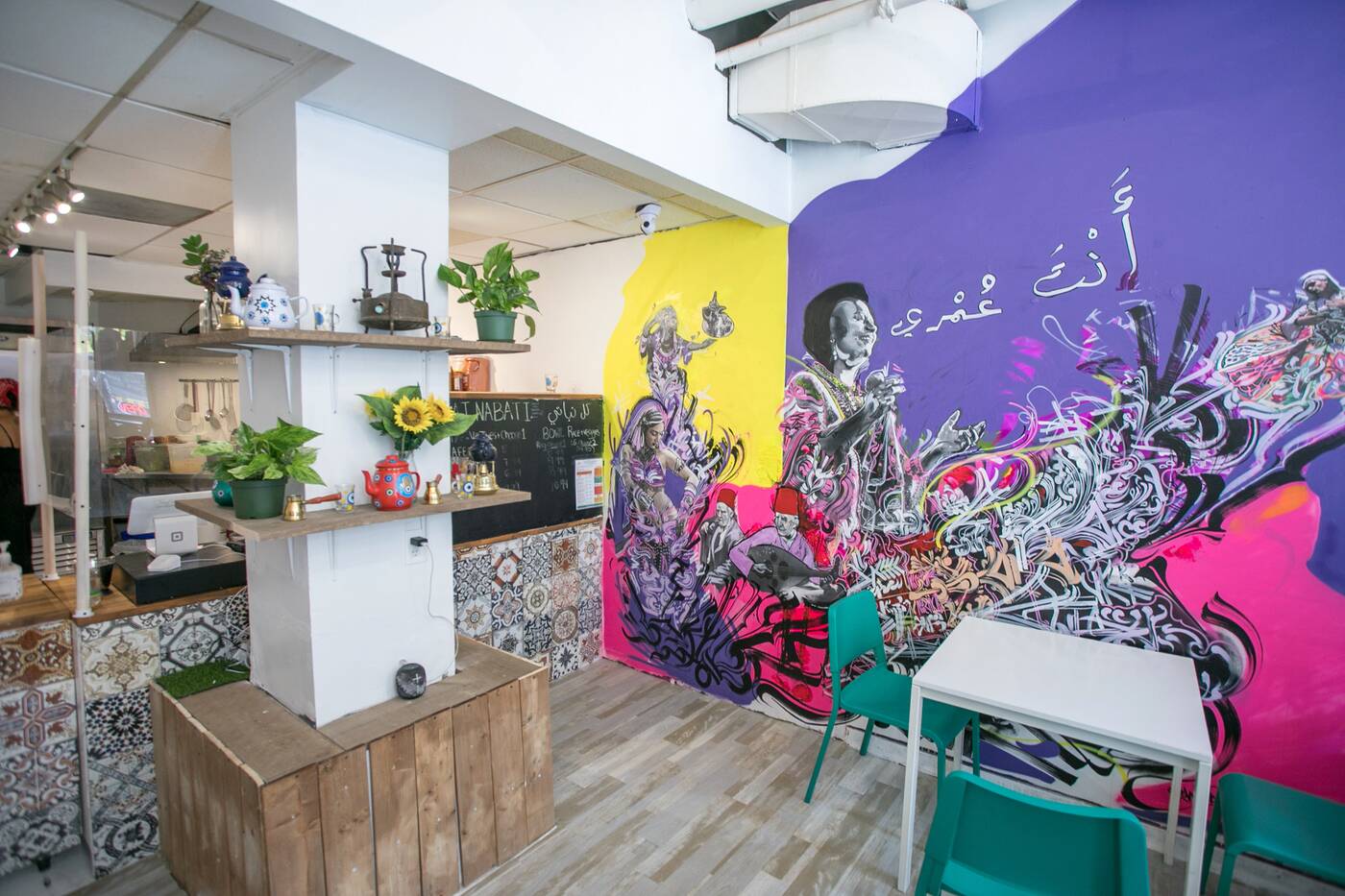 Following years of eating meat, Ali — who co-owns the small business with Tamer El Shazli and Josh Dias — says her health struggles and career path as a nutritionist led her to veganism, from which Eat Nabati was born. 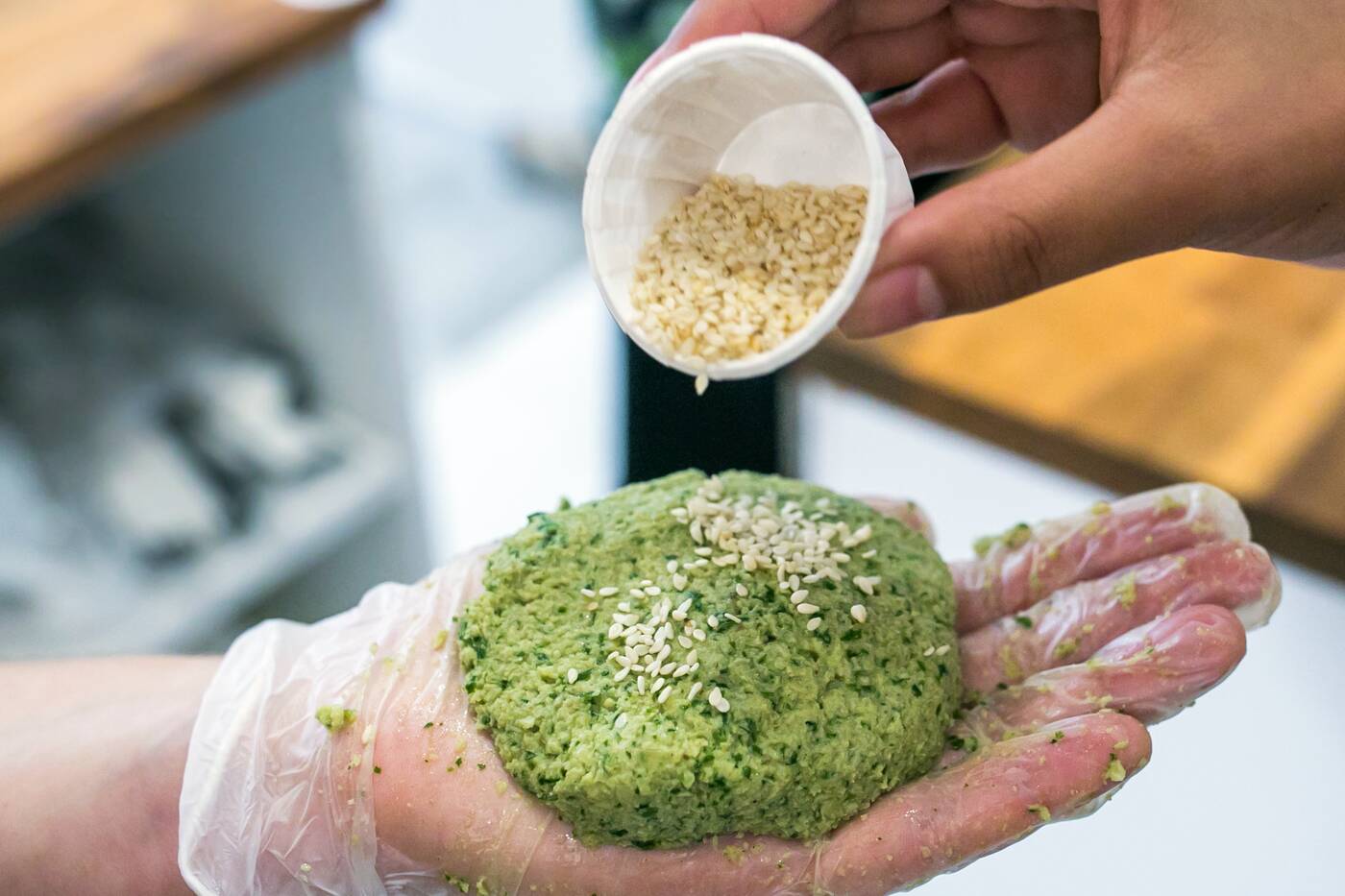 The restaurant honours some classic Middle Eastern favourites, while keeping all but one item on the menu under $10.

Past the psychedelic mural by local Kensington artist Rowell Soller is the takeout counter where you can order their signature stuffed falafels, $4 a patty. 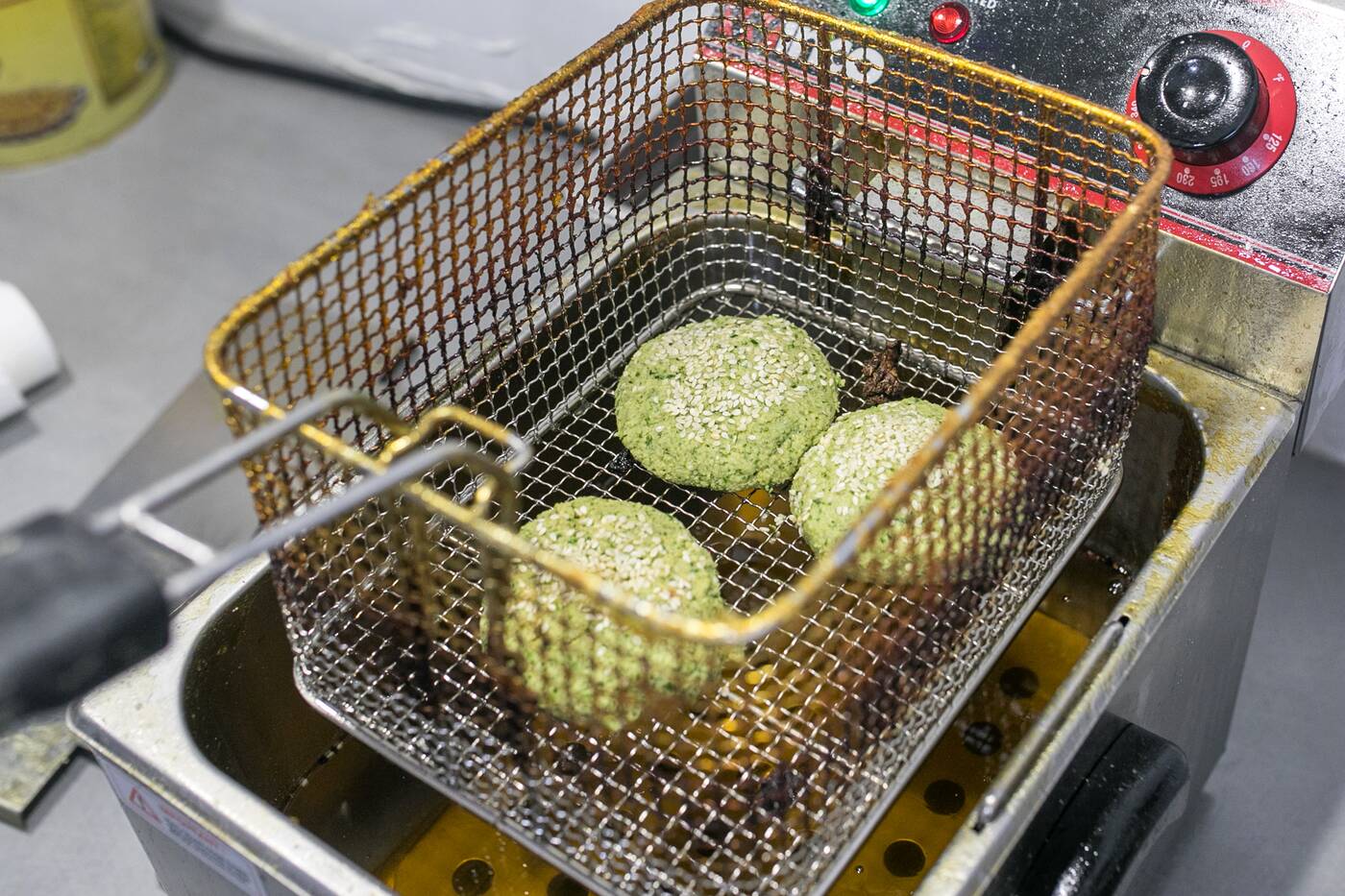 They're massive fava bean-based mixtures with tons of parsley and a thick inner stuffing of a rubbery halloumi cheese made from soy and cashew, plus a ring of chilli and caramelized onion. 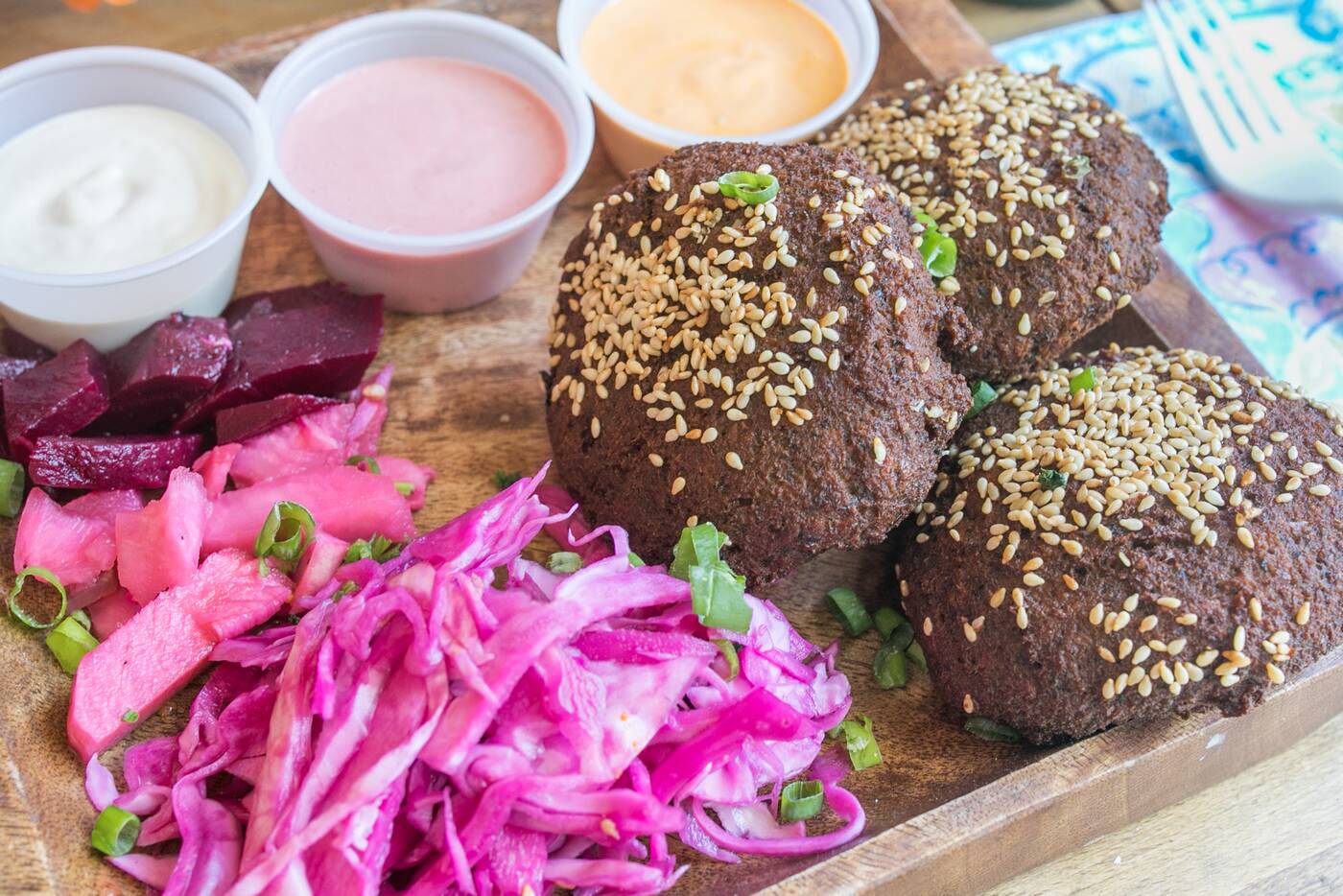 Tahini is the driving force at Eat Nabai, with three types, all gluten-free: a traditional lemon-based sauce, a harissa tahini, and the standout sweet and smoky beet tahini made with maple syrup. 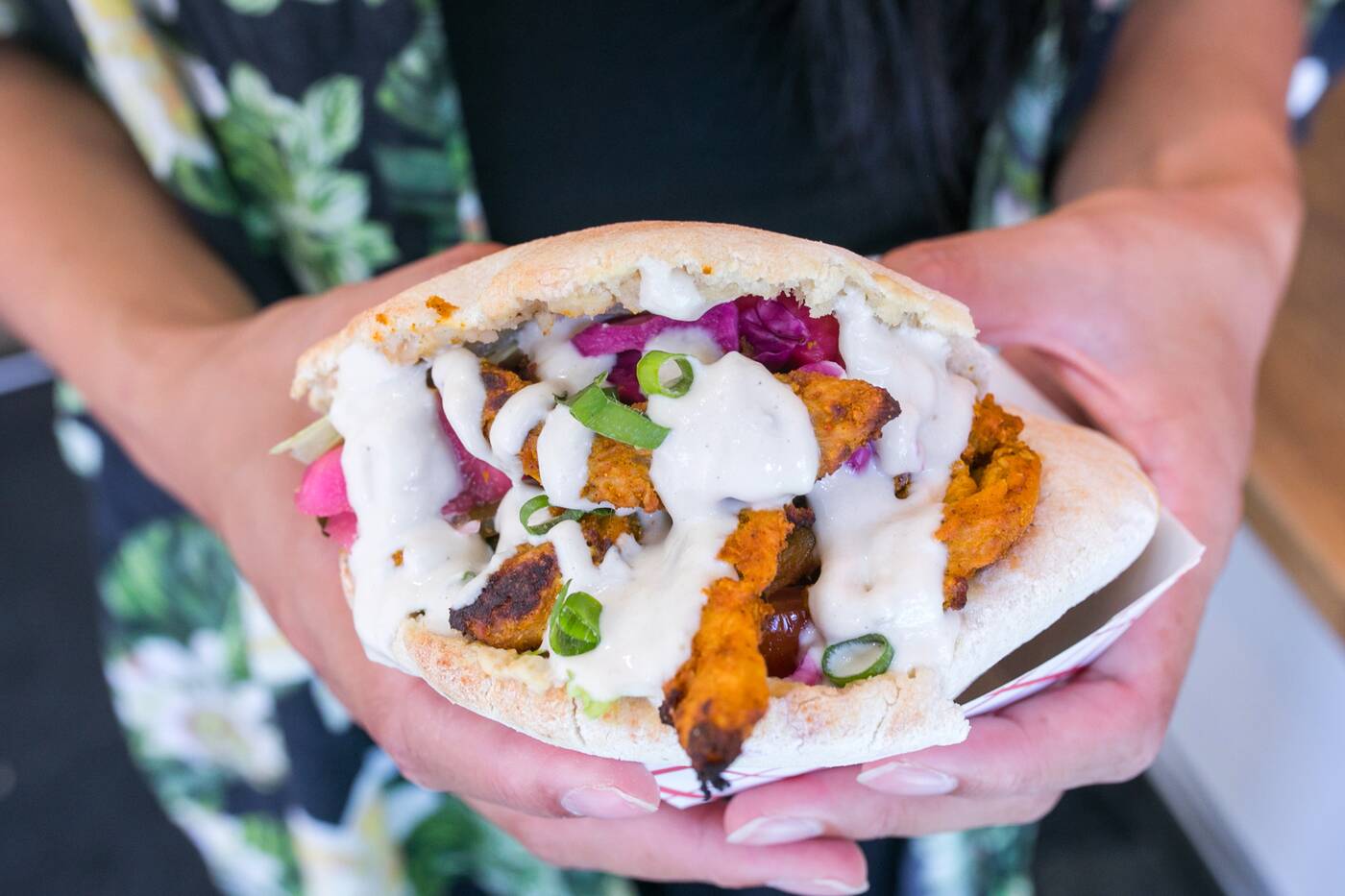 The Mama Shawarma pita ($7.99) is a best-seller, made with a seasoned soy-based 'chicken', garlic sauce, pickled radishes and cabbage. As with everything on the menu, you can also get the shawarma in a bowl of rice and lentils or fries, both for $9.99. 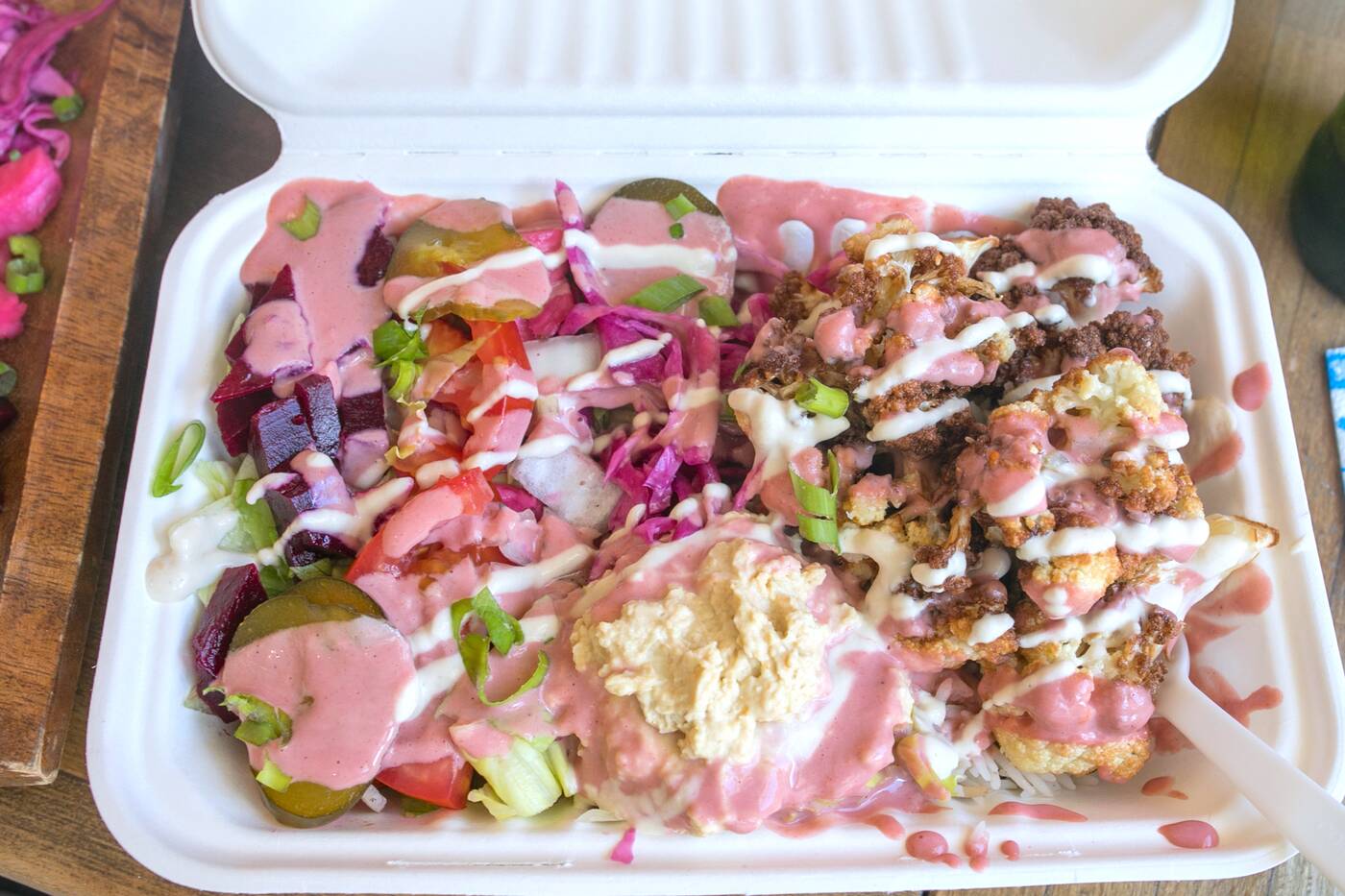 The za'atar cauliflower bowl ($8.99) is super hearty and easy on the budget for the size, using large chunks of cumin-tossed cauliflower with a za'atar spice blend. 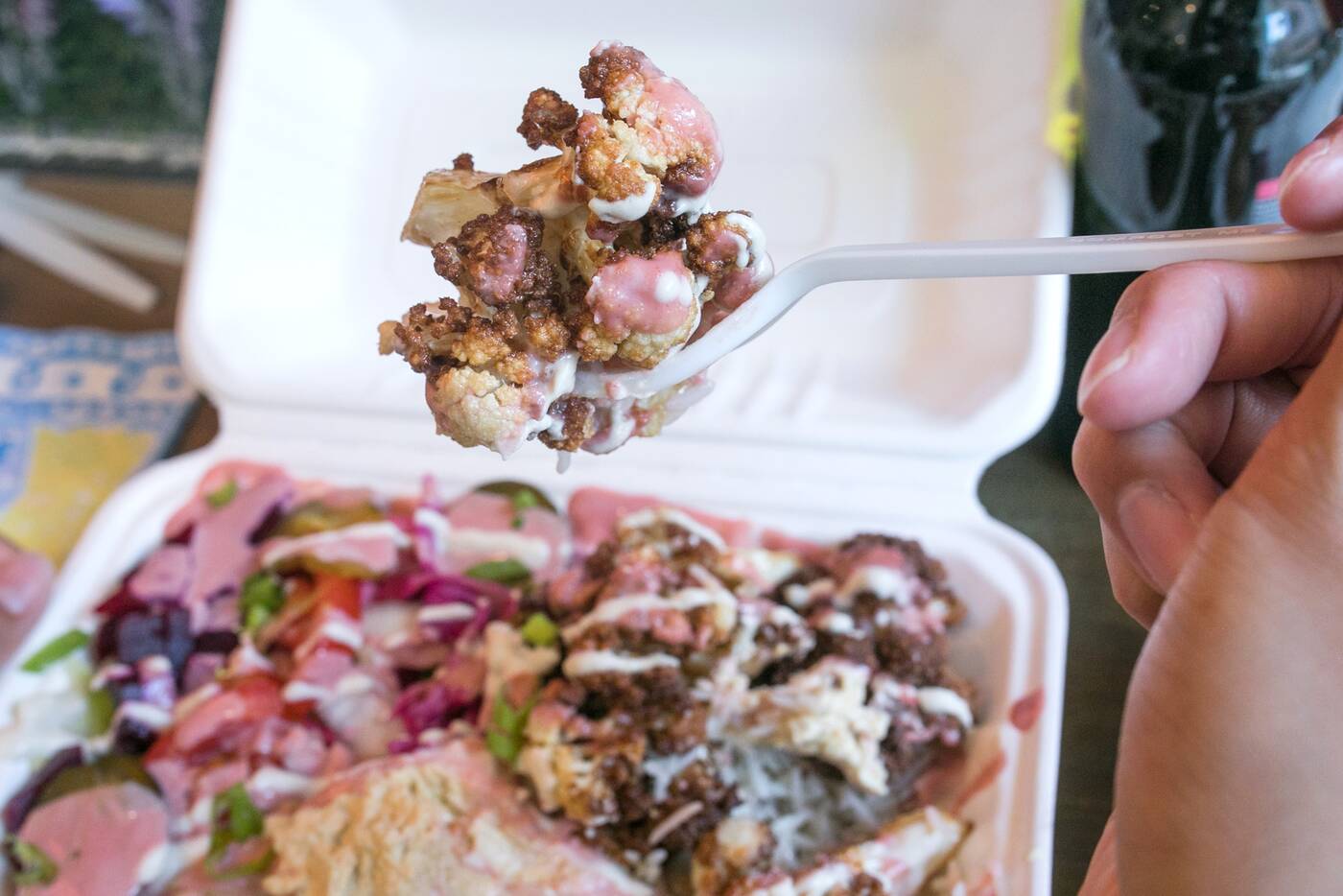 It's doused in the addictive sweet beet tahini sauce. 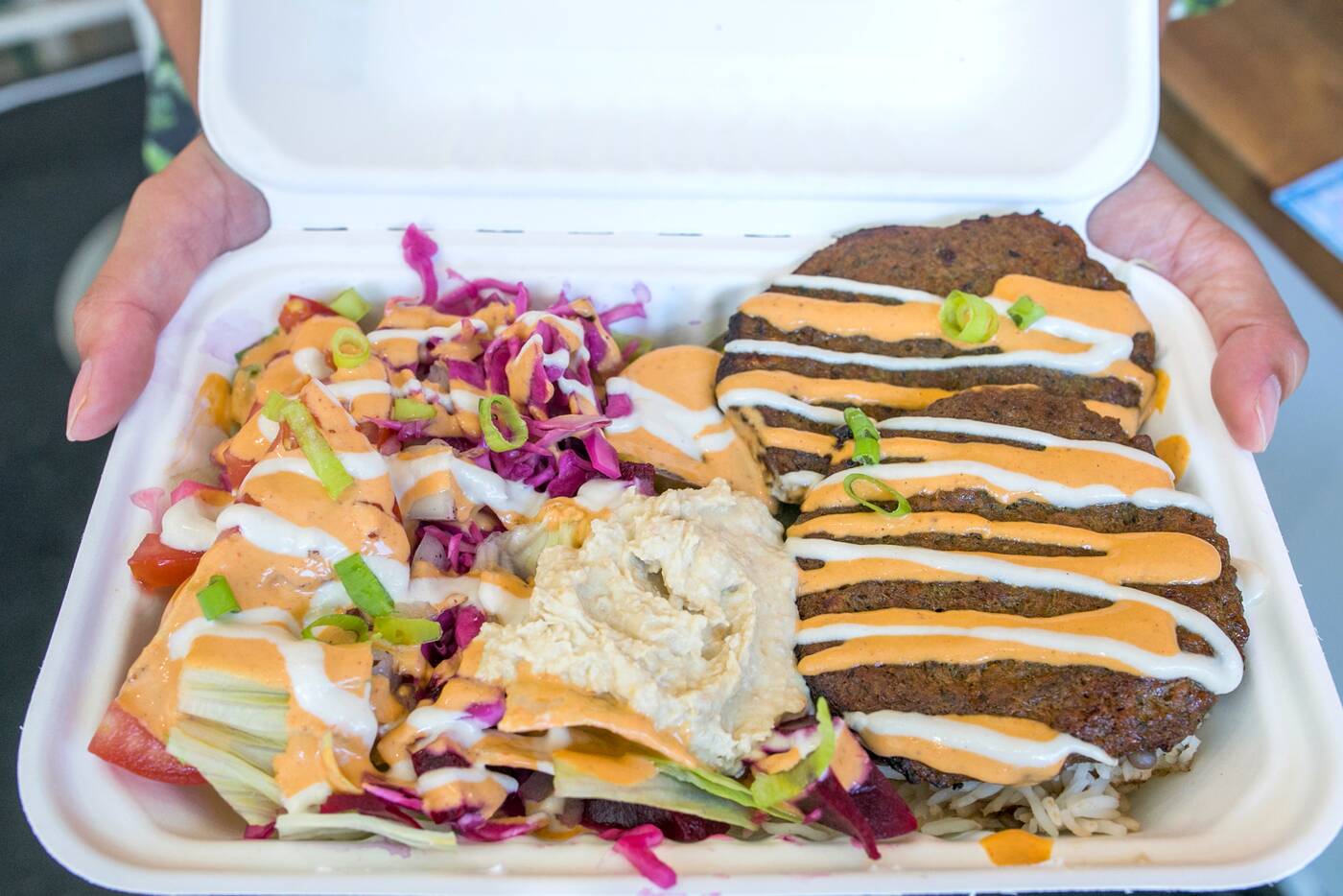 Cairo Kofta in a bowl ($10.99) forgoes ground beef or lamb and uses a heavily-spiced blend of grains and non-GMO soy seasoned with parsley, onion, sumac and nutmeg. It comes with hummus and drizzles of tahini. 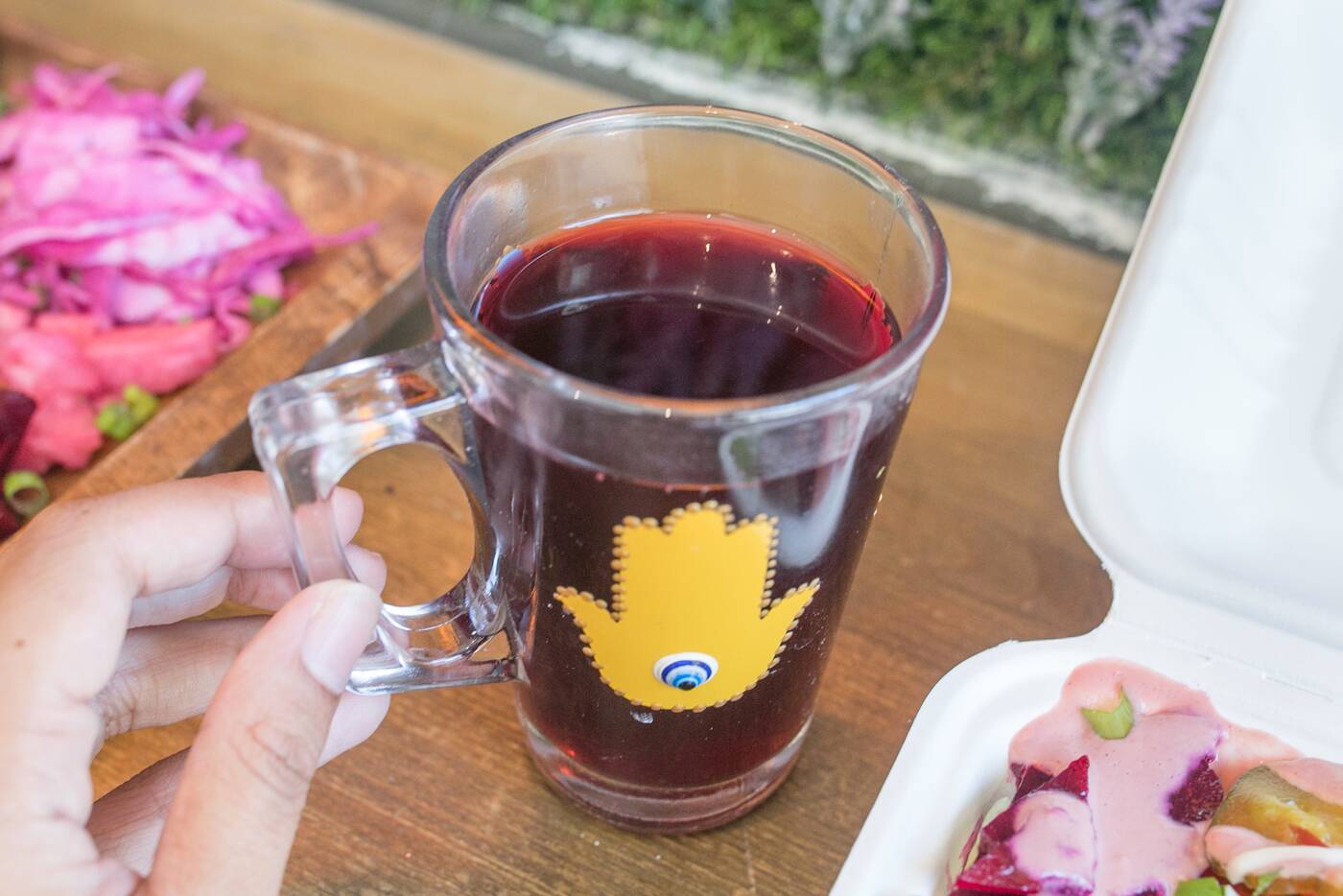 Soothing iced hibiscus ($4.75) is a sweet and tangy cooldown moment. 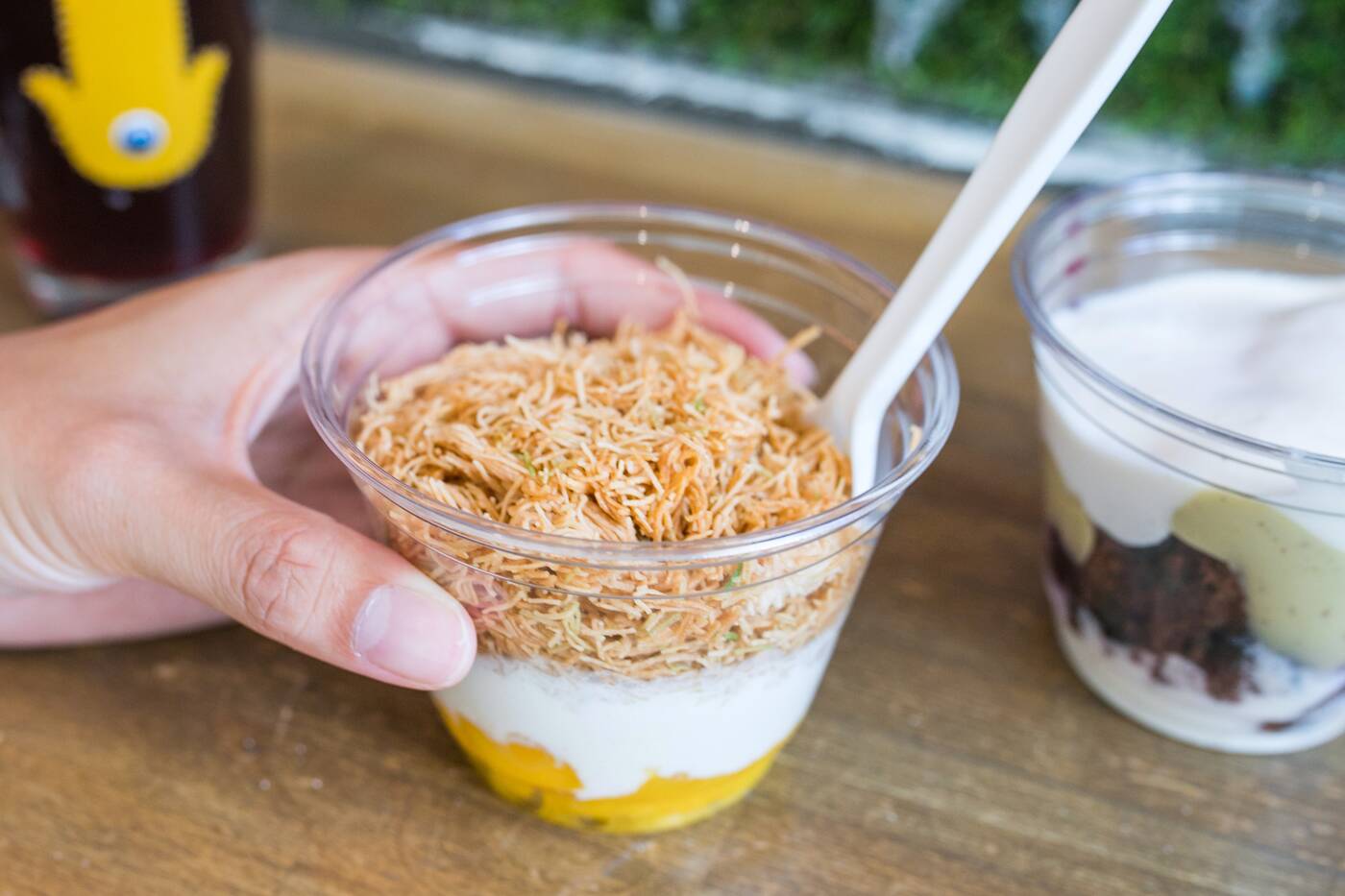 For dessert, there are a few vegan takes on Egyptian household favourites like a seasonal kunafa ($6.50) made with mango, housemade coconut cream, and a top layer of kataifi noodles and pistachio, usually eaten around Eid. 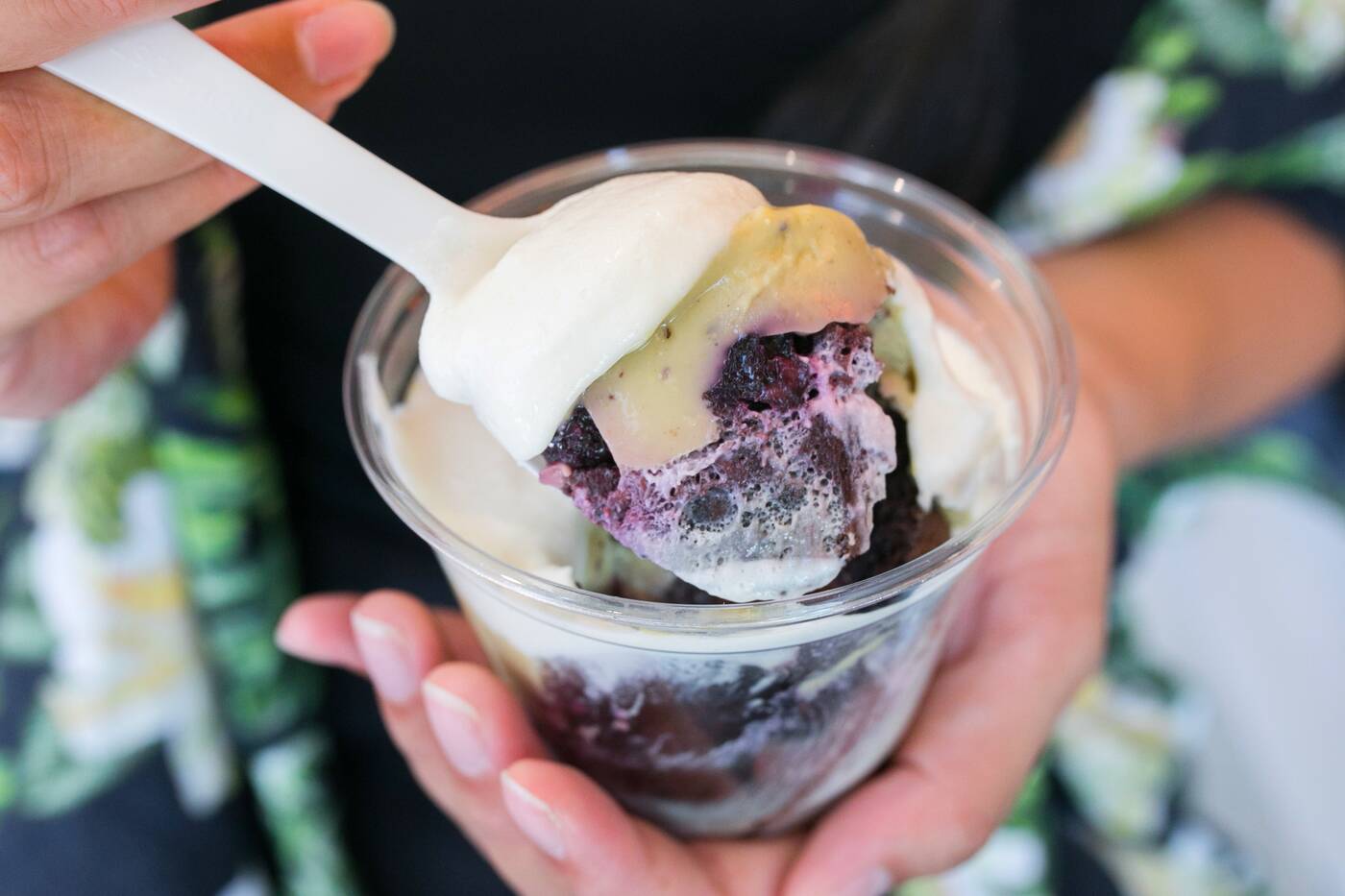 A twist on chocolate sponge cake ($6.50) is delicious, with layers of pistachio custard, coconut cream and a mixed berries compote.

Eat Nabati also has a location in Oakville where you can eat meat-free Middle Eastern fare. 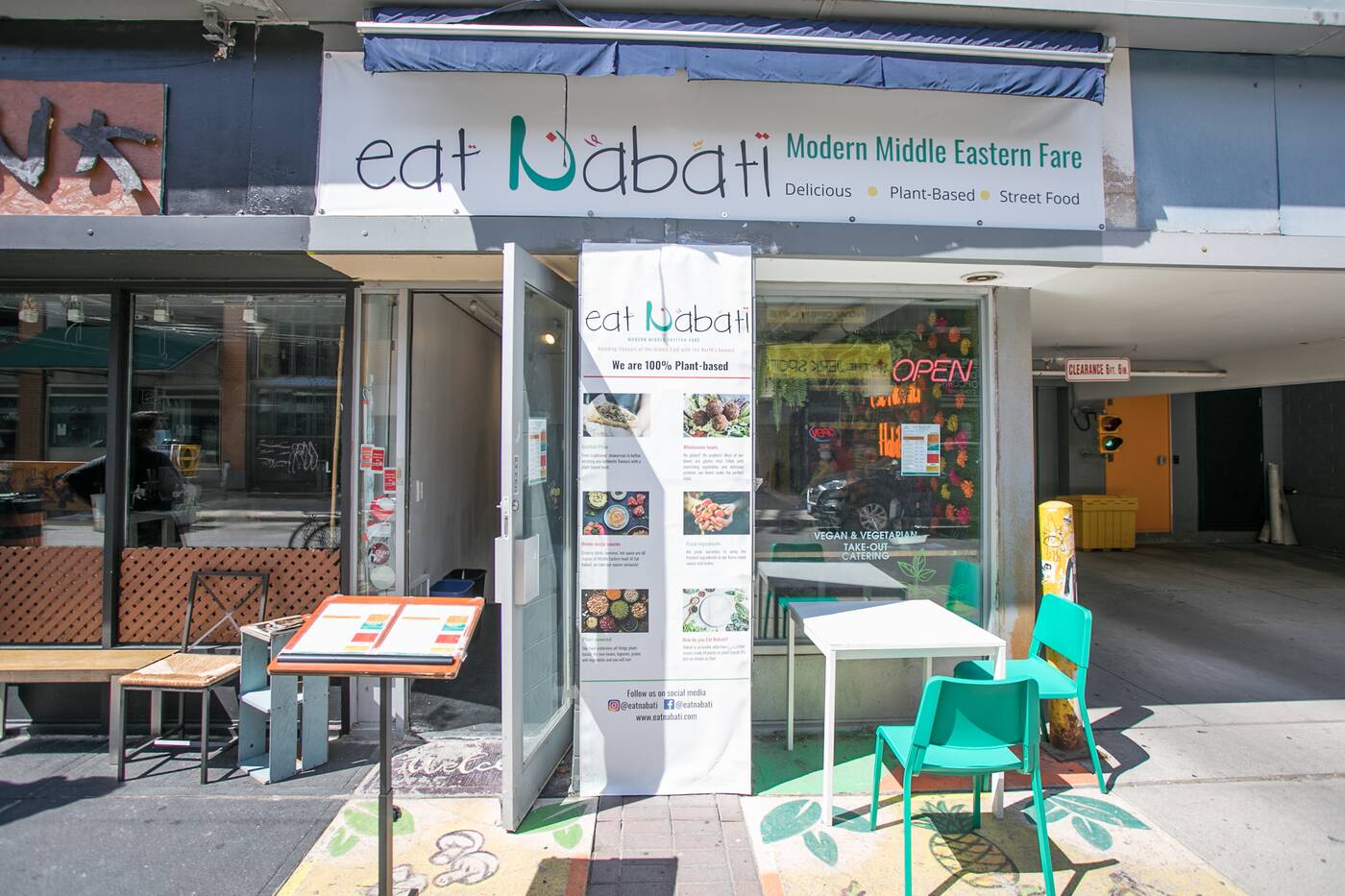