Much like Italian food, Mexican is a cuisine that has been commercialized and turned to trash, worldwide, by fast food chains and supermarket freezer-aisles.

When I see the stuff out there being toted as "homestyle" or "authentic" I just gag-on-the-spot. Unfortunately, so many of us are raised never knowing the real deal, so we just take the crap and learn to love it.

In terms of Mexican, my taste buds were first awakened when dining in a little family-run spot in New Mexico. Coming back to T.O. I knew what I was looking for... and I found it at Dos Amigos . As those who know this hidden jewel well can tell you, it's simply the best authentic Mexican in town. 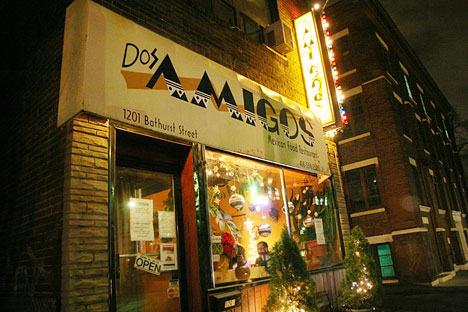 My girlfriend and I arrive for dinner after dark. There's no chance of missing Dos Amigos though, as it glows like some kind of mirage on this quiet section of Bathurst St. (between Dupont & Davenport).

We tip toe up the steps and, like entering an alternate universe, we are suddenly surrounded by a packed house, people laughing and and chatting, Spanish holiday music, Mexican decor and busy Latin waitstaff keeping everyone merry and well fed.

We are seated at a table for two and presented with our menus. Time to deliberate.

Of course, you know me, I won't make you suffer through verbal descriptions of the culinary delights... I'll let the photos do most of the talking: 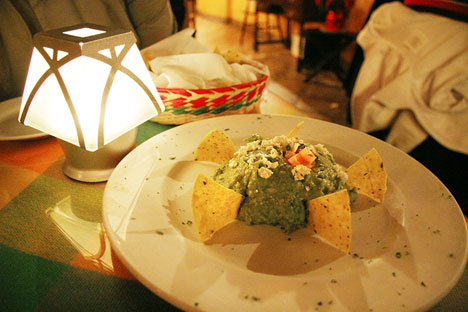 To start: Guacamole and nachos! We were compelled to try and I'm so glad we did. Don't let the photo fool you, the portion was actually quite generous (there's a basket of nachos tucked away on the side there) and we almost weren't sure we could eat more after polishing this starter off (who am I kidding, of course we could).

The dip itself was notably fresh and topped with "Queso Fresco". The tortilla chips, naturally, were home made. $7.95 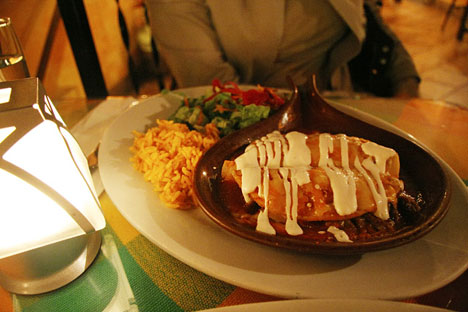 Next come our orders. First up: Enchilada platter. Two corn tortillas with chicken (though you can choose beef, pork or veggies), covered with sauce, cheese and sour cream, served straight from the skillet. On the side were generous servings of rice and a colourful salad. 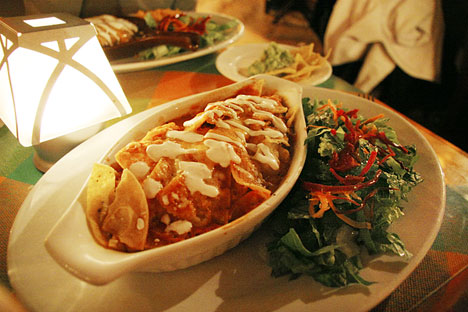 Next, Budin Azteca. This is a "thin layered casserole of vegetables, crispy tortillas, and cheese" served with the same choice of meats or more veggies and then topped with ranchero sauce. I was looking for a veggie choice and this certainly satisfied that requirement! It too came with fresh salad.

Both entrees were somewhere between $10 and $13 each. 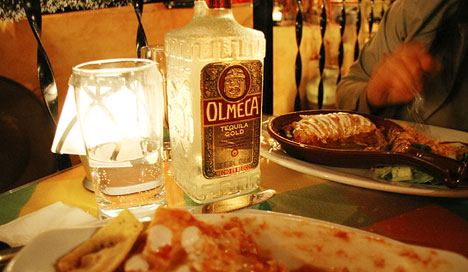 Barely into our dishes, the waitress surprised us with this Tequila bottle -- filled with water -- to perfect the spread.

We had only asked for a glass but were happy to have a nice bottle of water alongside... even if it looked to others like we were downing some serious amounts of the real stuff.

Once the (empty) plates had been cleared, it was decision time. Was there any way we could spare some room for dessert?

"Want to split one?" 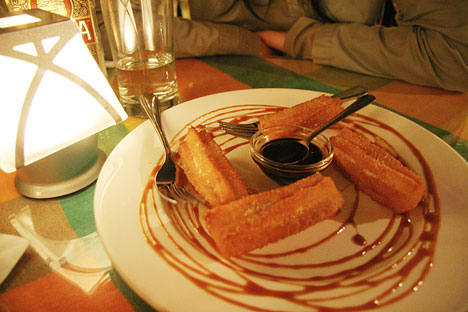 We went with Churros (fried fluted fritters -- say that five times fast) with chocolate sauce on the side. $4.95 Perfect for sharing.

They were a little more heavily fried than I would have liked, but we came for authentic, not health-conscious, and they were (like everything else) delicious.

With a winter as warm as the one we're having, I'm tempted to grab my shades and sandles and just spent the holidays at Dos Amigos. Who needs a trip to Mexico when you live in T.O.?