Dino's Pizza in the Junction is the second outpost of the Queensway classic serving wood-fired pies.

After more than 15 years, Dino Ari, who has made a name for himself as one of the go-to pizza guys in the city, has expanded the brand from just a takeout spot to a full-fledged Italian spot with bruschetta and pasta. 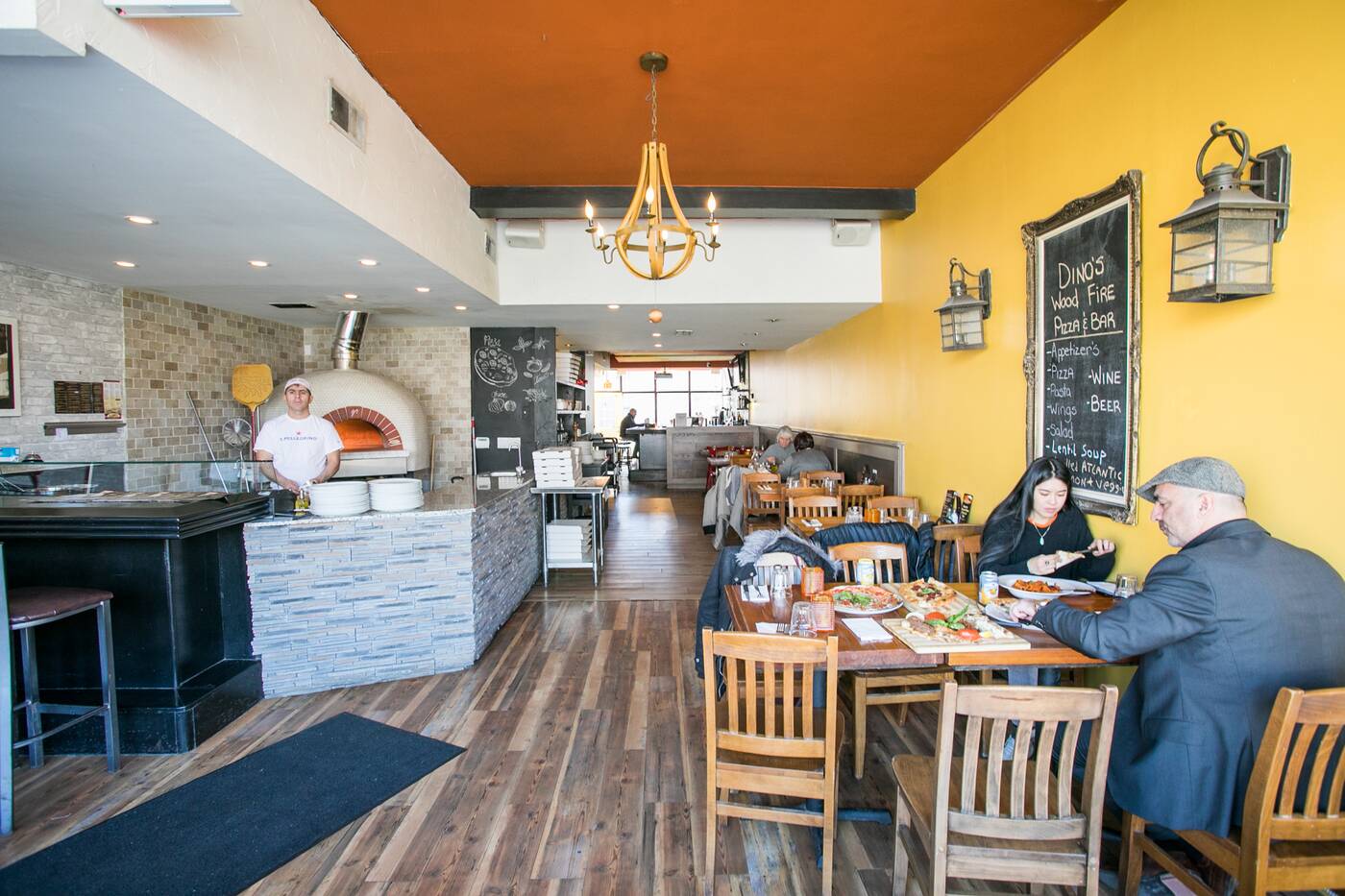 While the original location on the Queensway still spins out around 200 pizzas a day, according to Dino, it's a limited operation, at just 600 square feet. 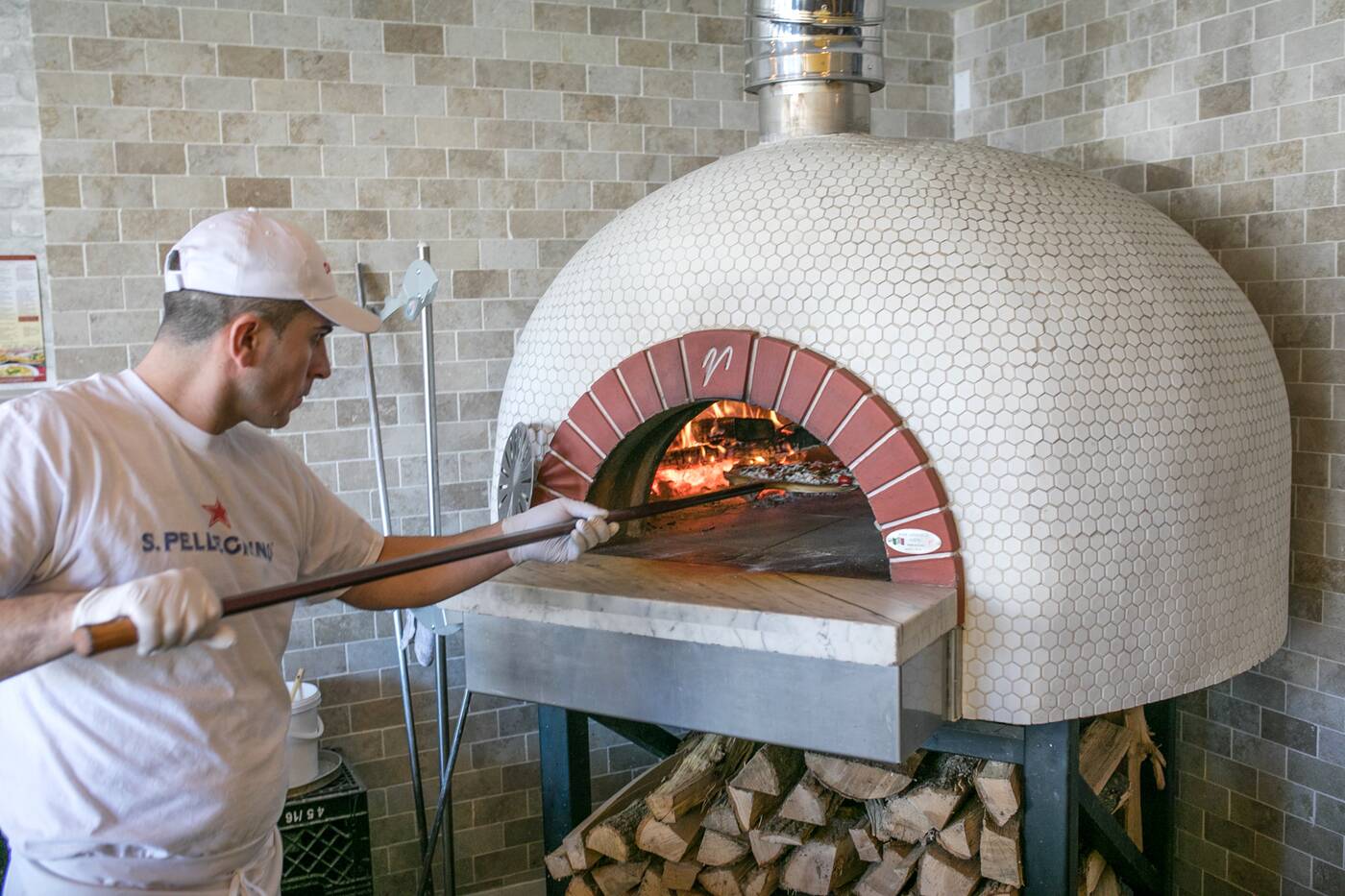 Taking over what used to be a 1,000-square-foot Via Napoli, this sleeker version near Dundas and Islington includes several sections, spacious seating, and a beautiful wood-fired oven that heats up cherry and maple wood all day long. 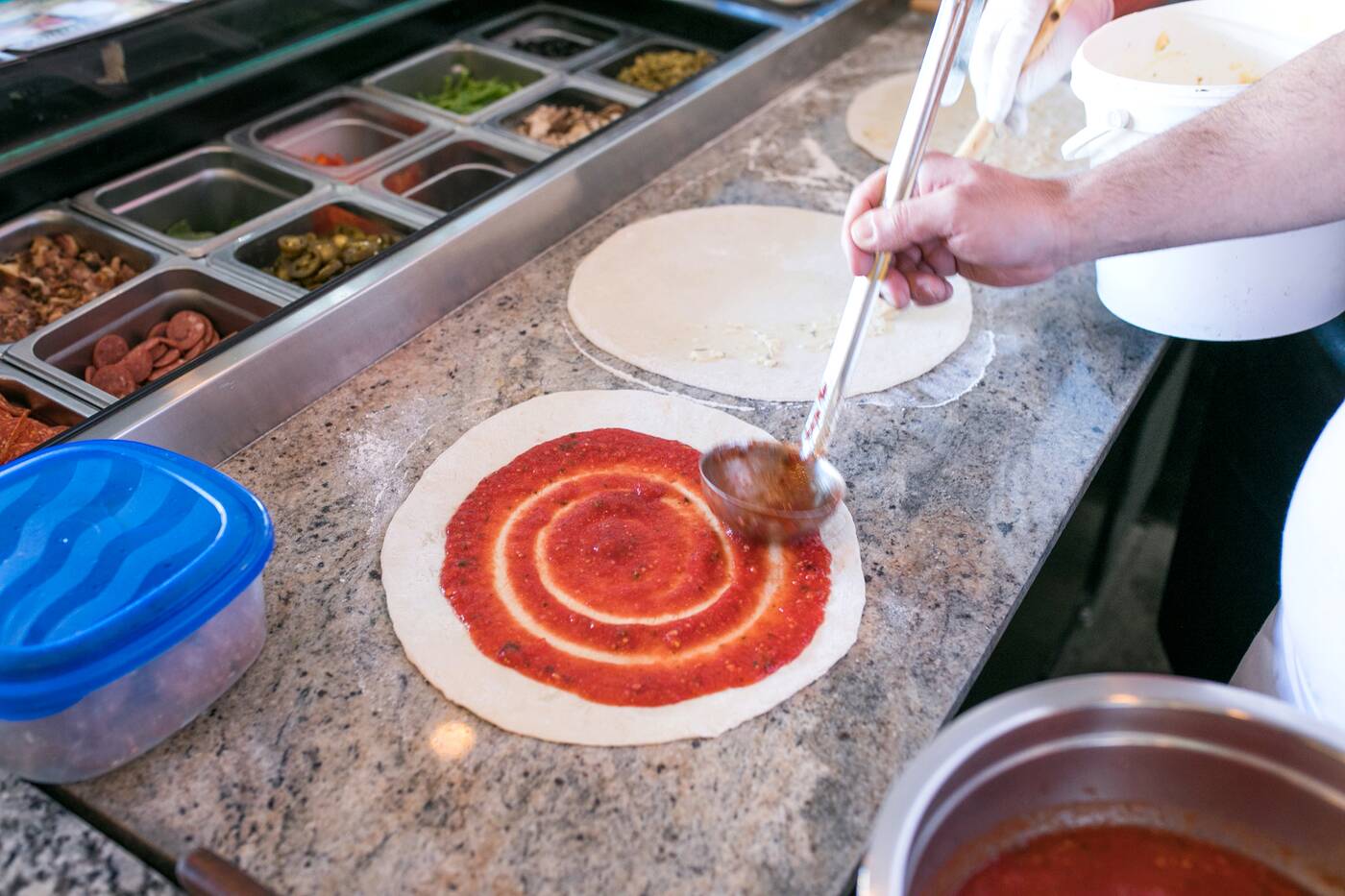 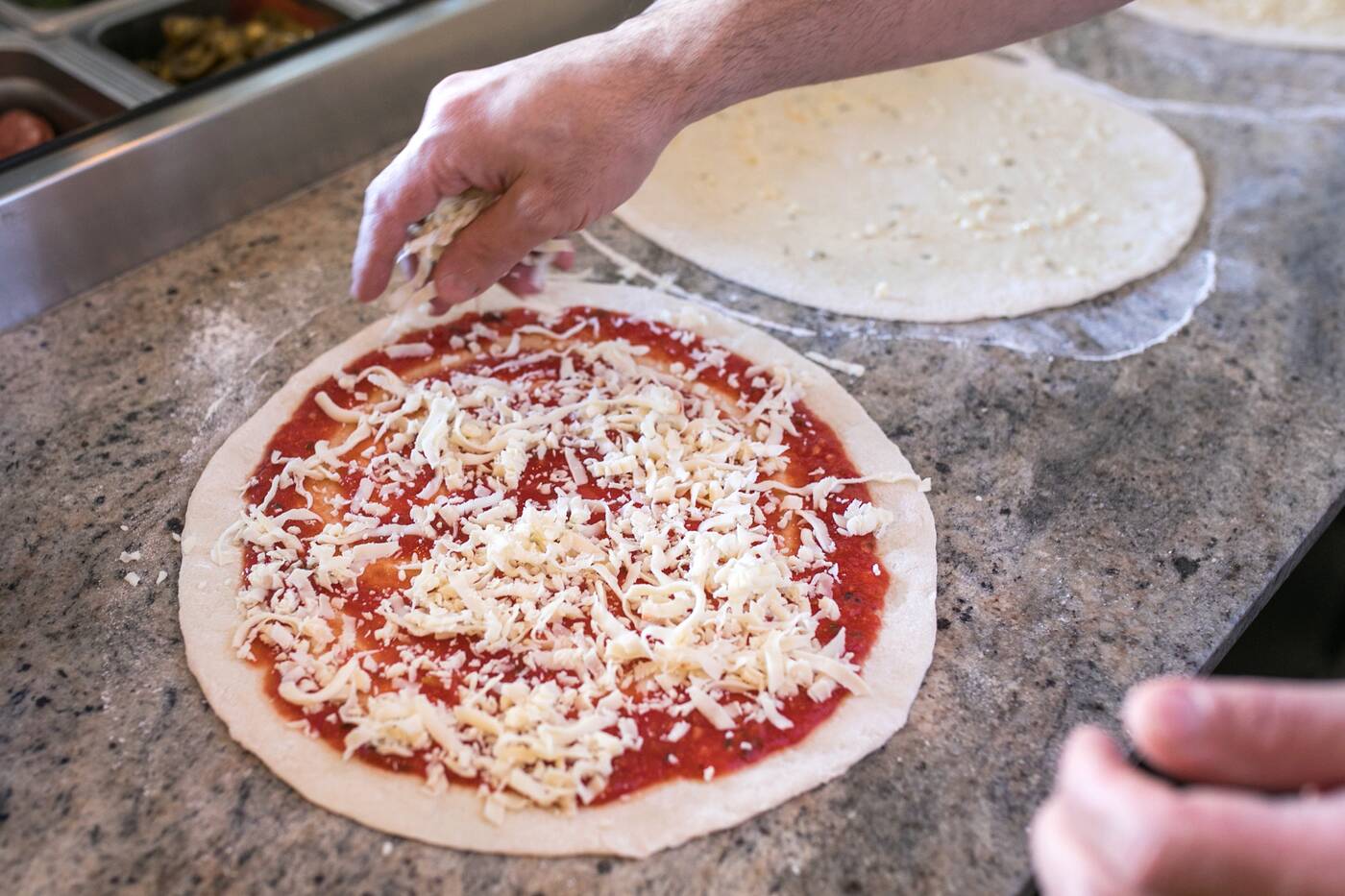 Or you can opt for the three new arrivals that have joined the menu, which, if you happen to meet Dino (an energetic, brand-conscious man who's pretty proud of his accomplishments), will be more than happy to explain their origins. 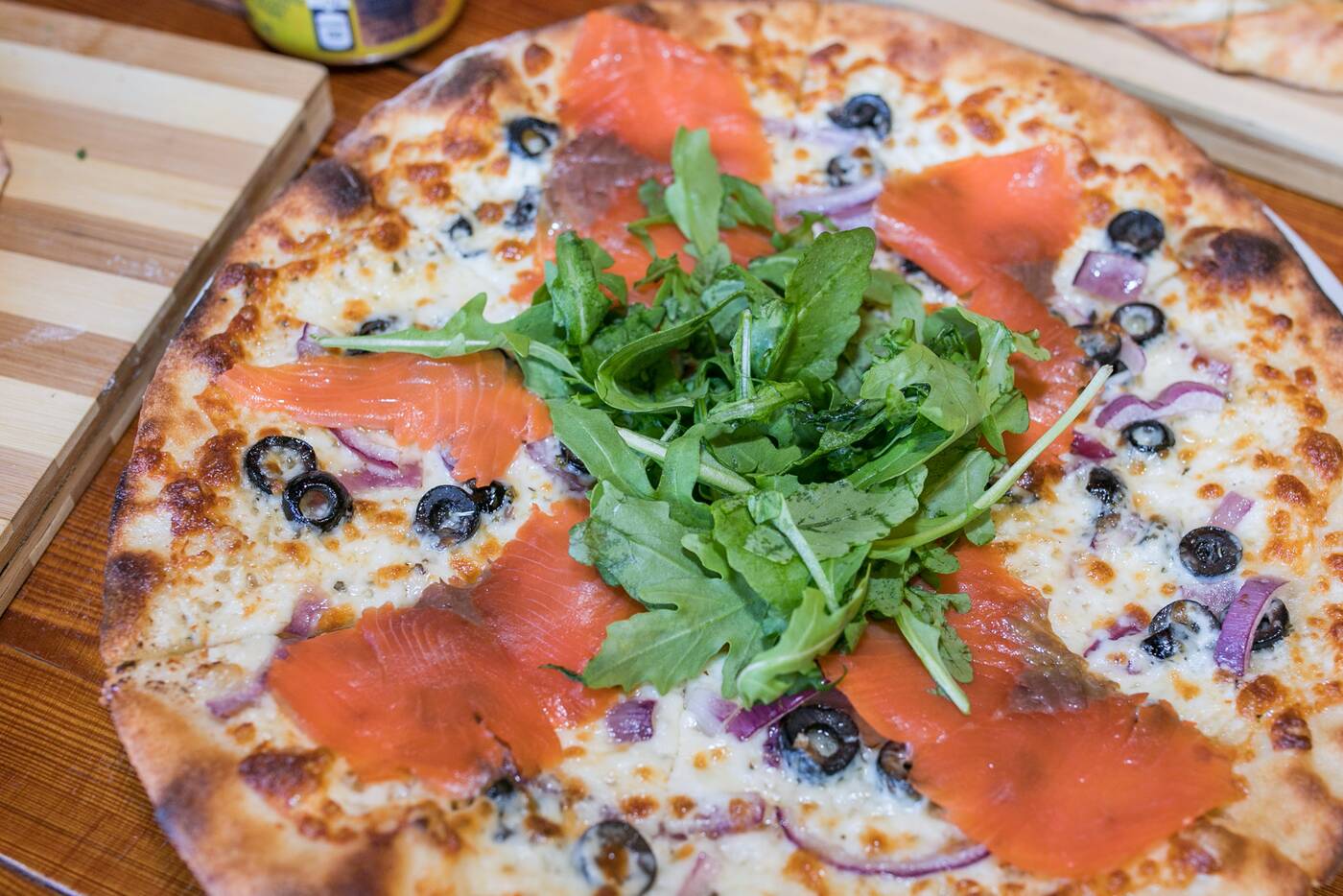 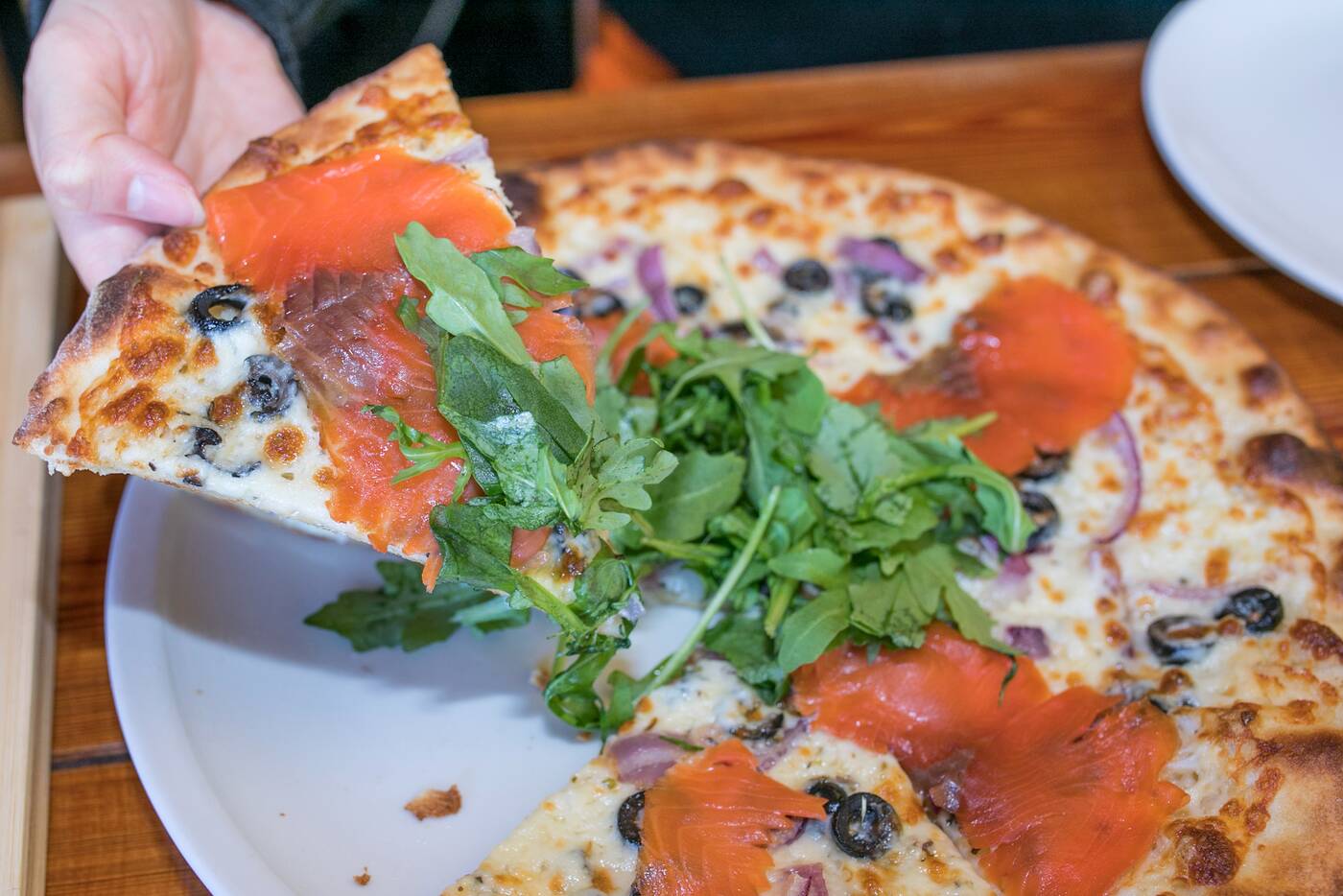 I'm told Toronto's mayor is aware of his eponymous pizza, but didn't have much say regarding what toppings would go on this tomato sauce-less pie.

Then there's the Amy Pataki, named after the former Toronto Star restaurant critic, whose review in 2010 was what first exposed Dino to the public consciousness. 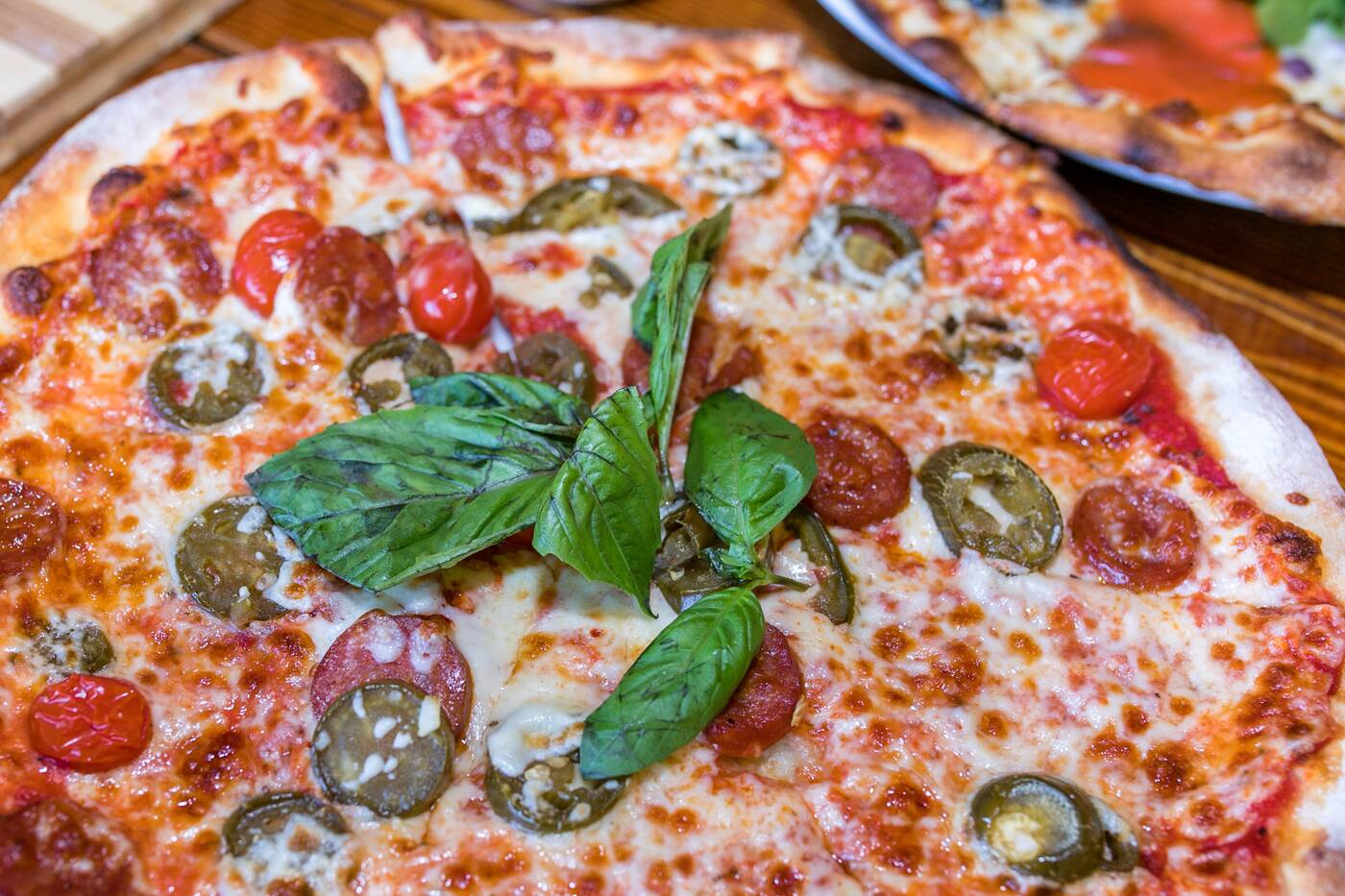 Unlike Tory's, Pataki's pizza seems a bit more relevant, with odes to the critic's Hungarian heritage via the Hungarian sausage, with jalapeno, cherry tomato, and basil. 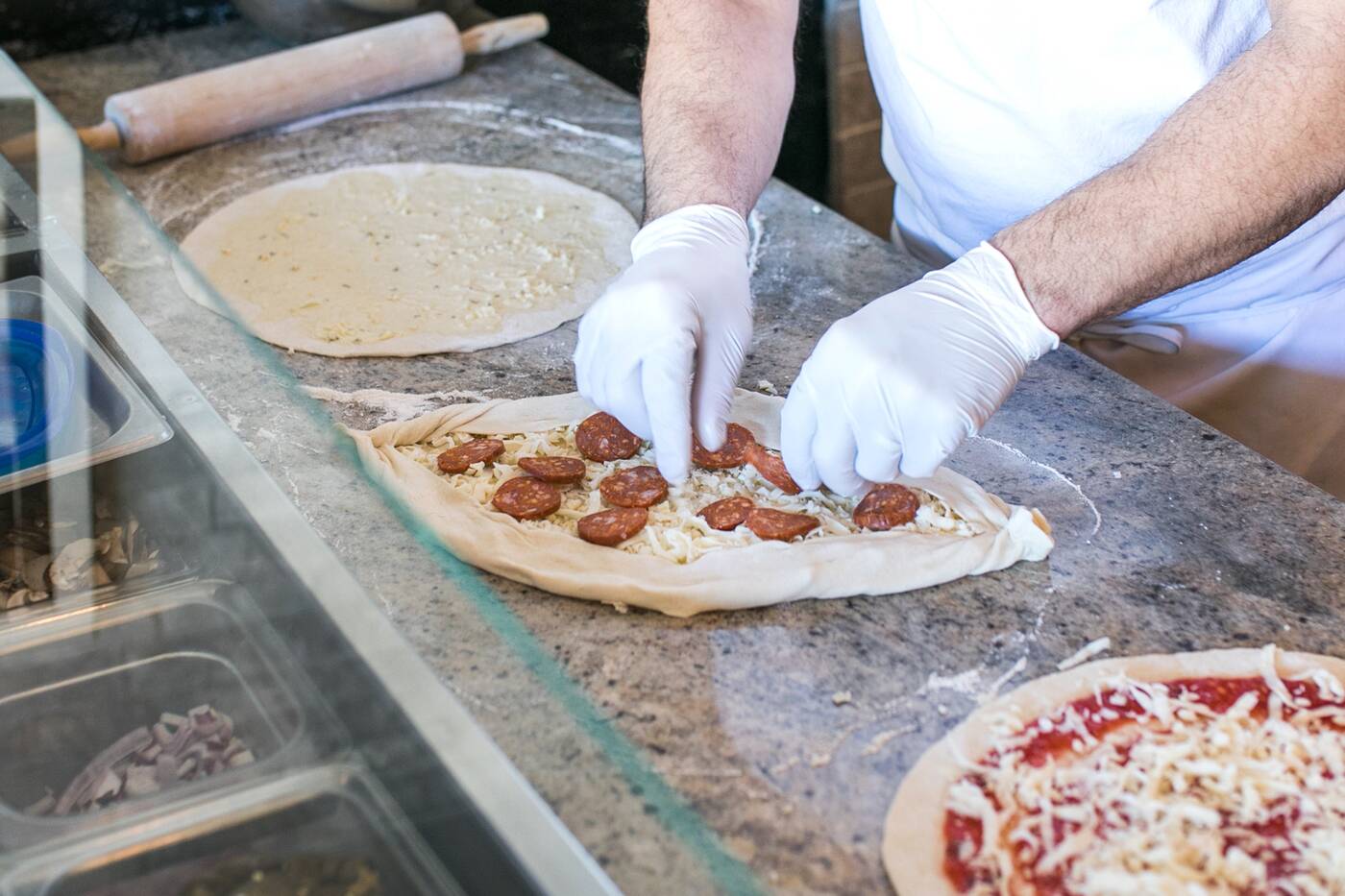 One of my favourite things about Dino's is that the place never shies away from garlic. Request it specifically and you'll get a full spread of fresh basic and garlic under your sauce, for an extra stinky kick. Also, the thin crust here is pretty fantastic. 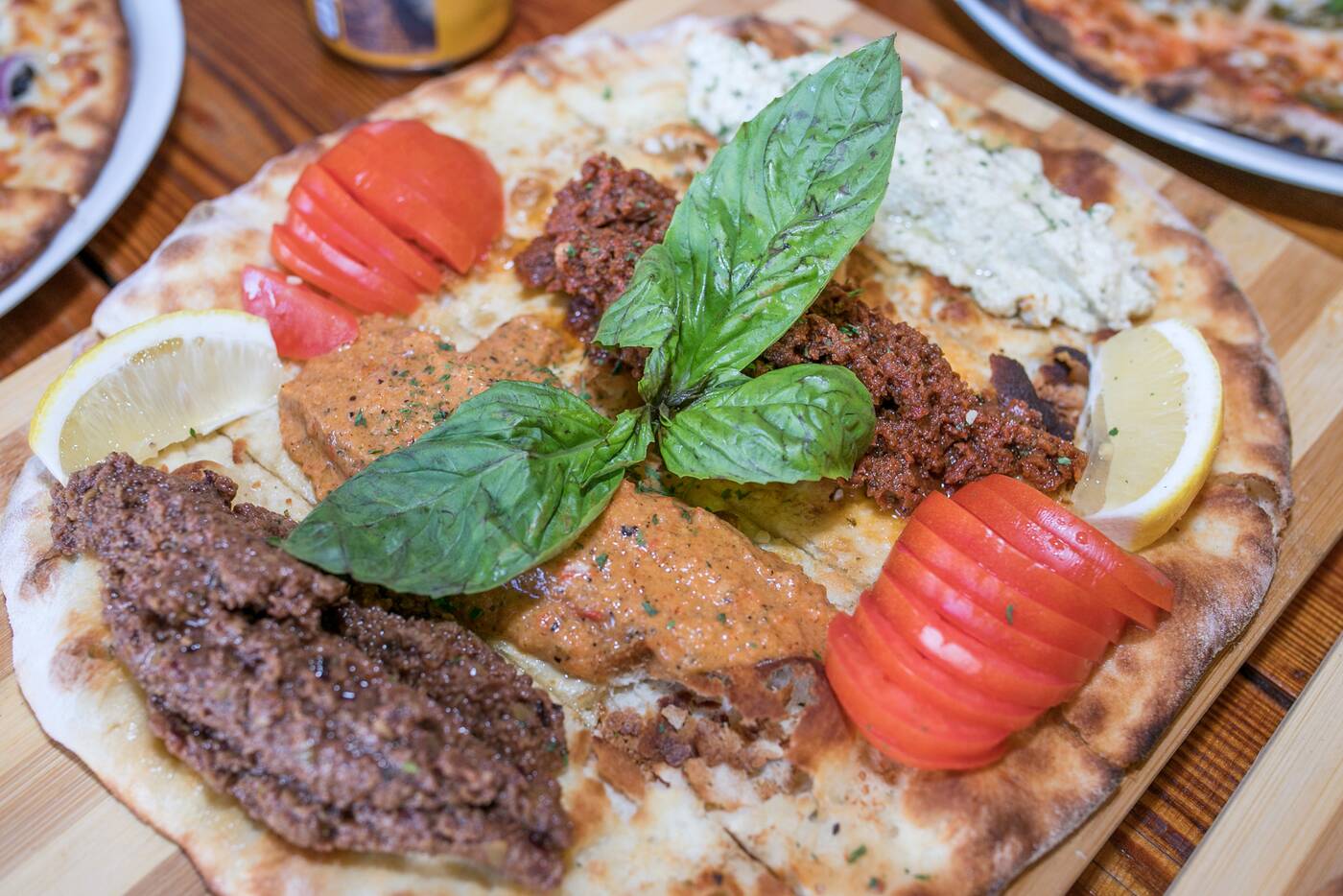 New to the menu is pretty much anything that's not pizza, including an amazing platter with pides covered in four very tasty types of dip: sundried tomato, olive, artichoke hearts, and roasted red pepper. 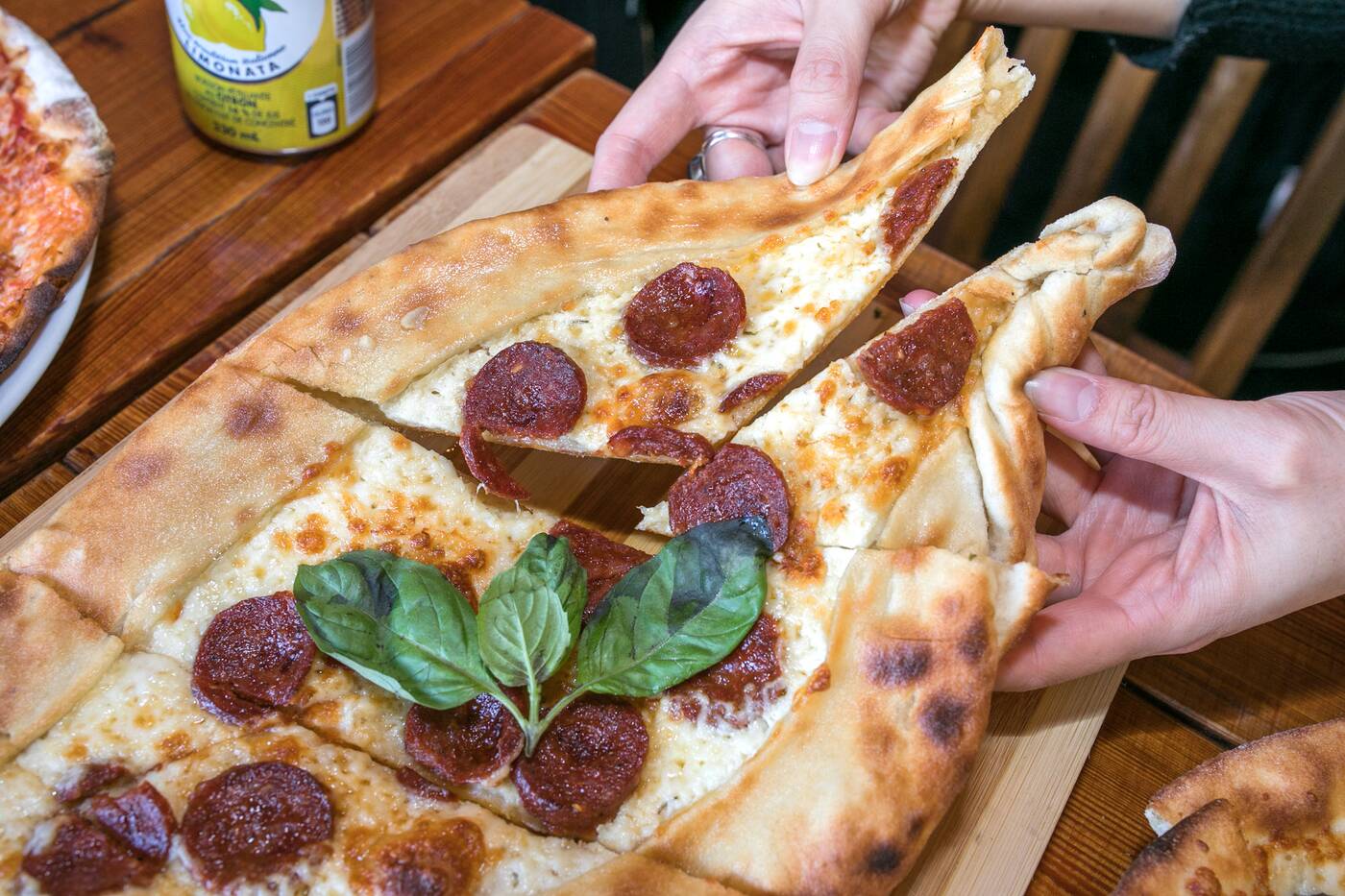 Dino first came to Canada in 2000 from Turkey's province of Tunceli (formerly Dersim), hence the Turkish pides with garlic butter, mozzarella cheese, and toppings like sujuk ($14.99). 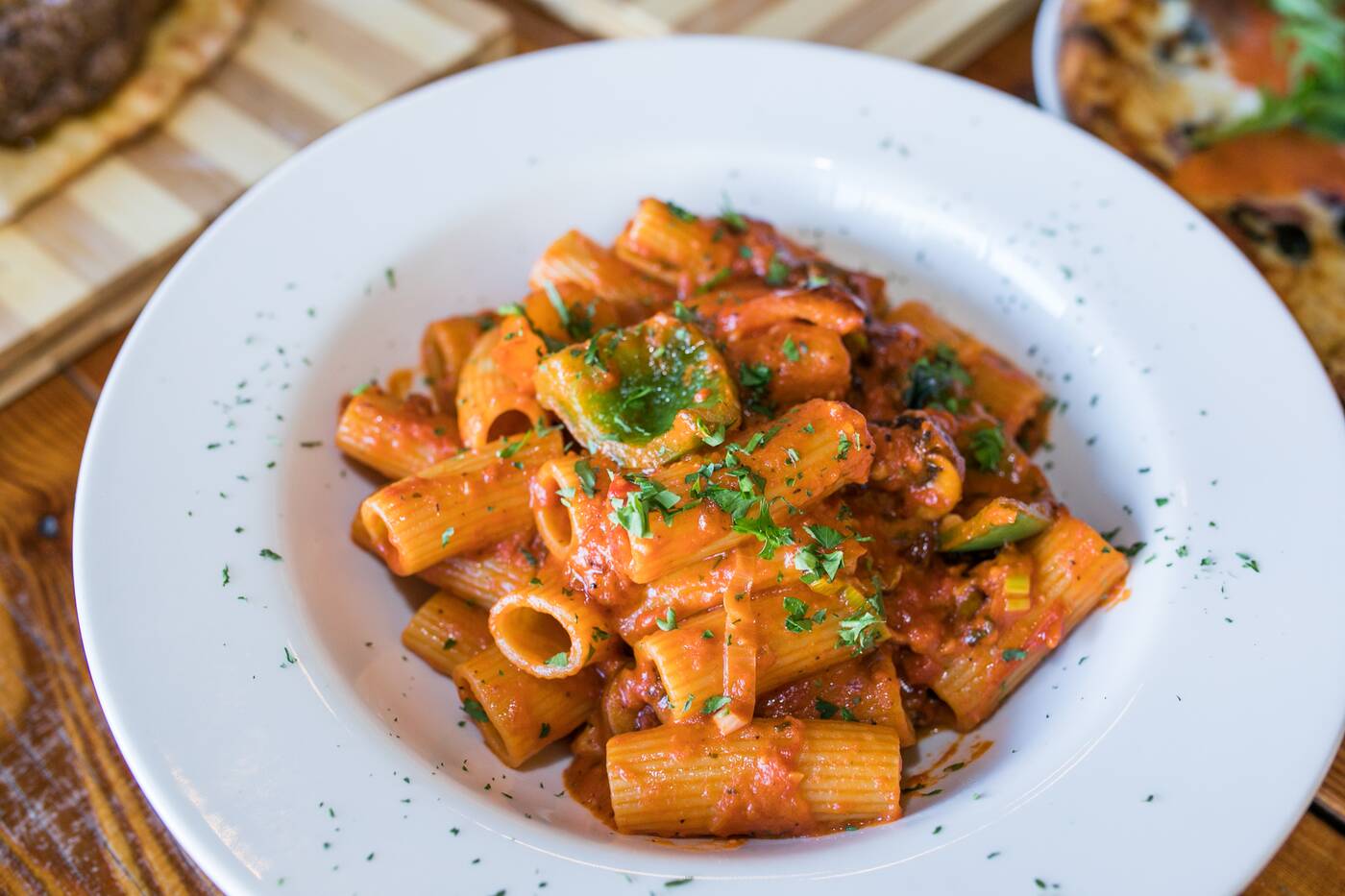 Not to be missed is the rigatoni ($18.99), a really a nice al dente pasta which comes with grilled veggies and a rose sauce. It's a pretty good dish coming from a brand that used to only toss out pizzas. 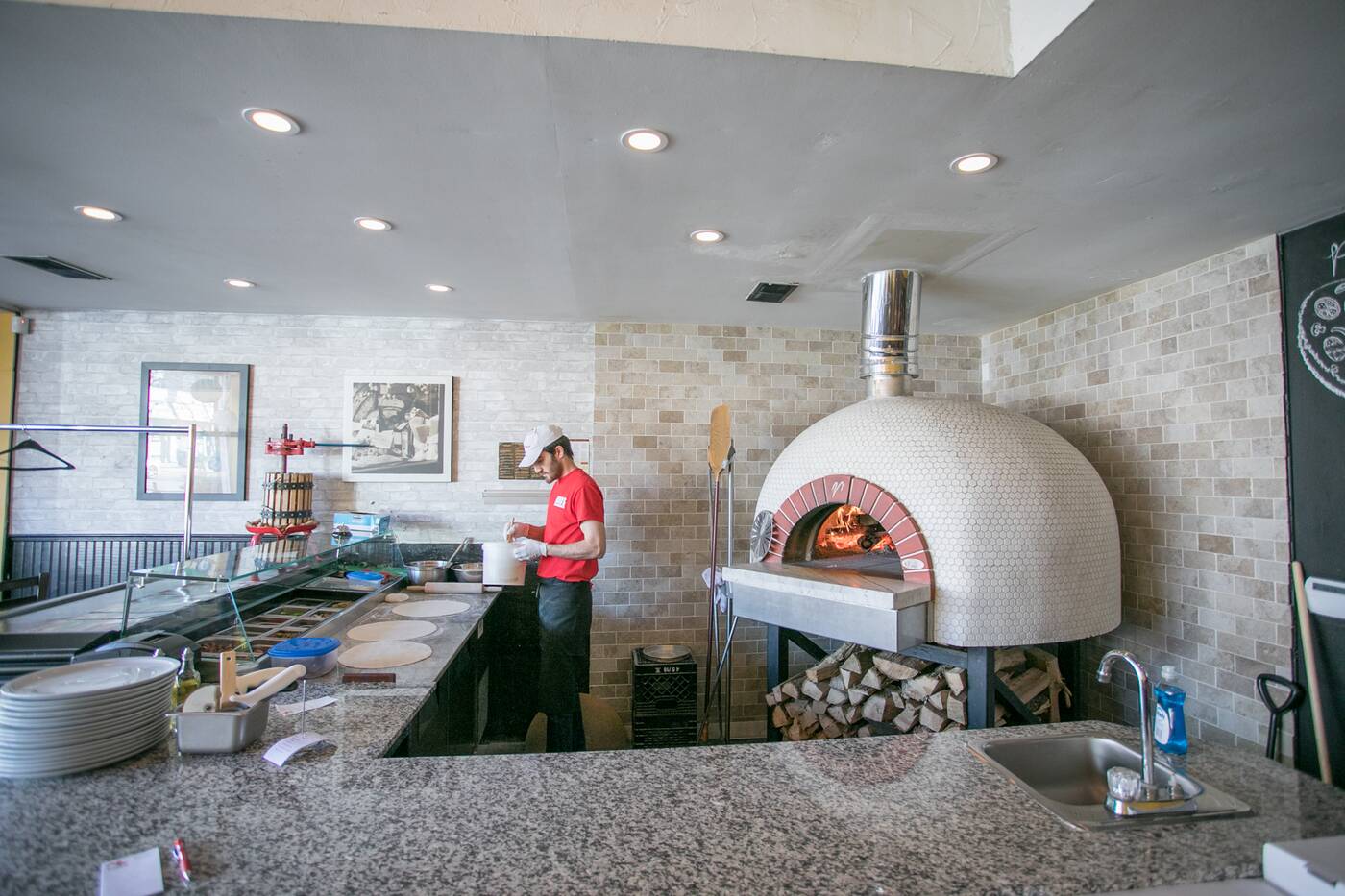