For those who've discovered brunch at Cora's, the weekend will never quite be the same. Now, a quintessential Sunday brunch involves waiting in long line with other hungry strangers - sometimes in the bitter cold - but amazingly, no one's complaining.

Naturally, this can only mean one thing: It's that good .

I went over to Cora's, late one Saturday morning. With a party of 5 (not the easiest to seat) we waited only 15-20 minutes tops before we were seated.

Flipping through the menu is a not a task suitable for the chronically indecisive. There is so much to choose from on this colourful catalogue menu . Omelet or eggs benny? Waffle or cinnamon french toast? Buckwheat crepes or the over-the-top Cora's special?

Here's what we went with:

1990's Harvest - Pictured at the top, this one is ideal for those who can't choose between sweet or salty. A large cinnamon-raisin brioche dipped in french toast batter with an egg and bacon on one side and an absolute mountain of fresh fruit on the other. While it wasn't my dish, I stole plenty of it. $9.85 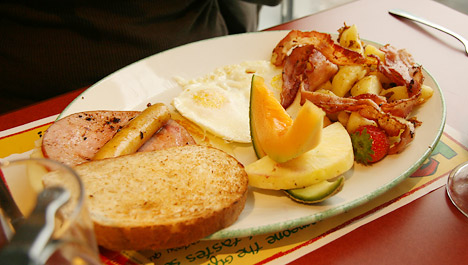 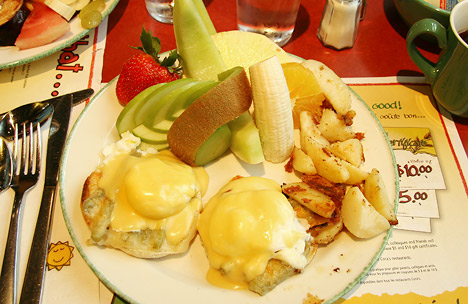 Also available with 2 other incarnations: ham or brie + mushrooms. All $11.25 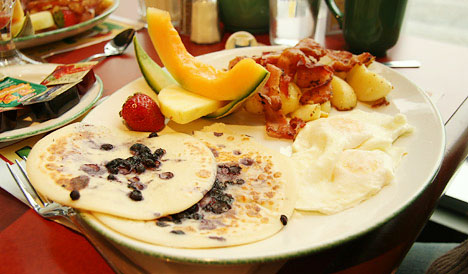 Rosemary's Sunday - Picturesque pile-up of a pair of eggs, bacon and two delicious real blueberry crepes. Like Cora's Special, this comes with fresh fruit and roasted potatoes on the side. $8.25 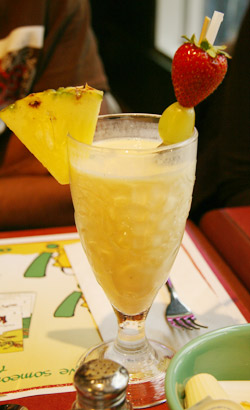 Washing those down were a few bottomless cups of coffee ($1.75), a Fruit Cocktail and a Banana Mango Smoothie (pictured here) - both $3.25.

As pleased as I was with the dish before me, every time the waiter walked by, I set my sights on something else. And while there's no way I could manage to eat another plateful, that's is of course what next time is for... which is what makes deciding easy.

Cora's is certainly going to be around a long while, so go ahead and try the special. You can always come back for more next week.

(at at Blue Jays Way)