With a weighty familial and cultural legacy on my shoulders, I walked into the Annex institution Chippy's looking for some crispy goodness, with a side of absolution.

My Devonshire dad and I disagree about a lot of things, especially when it comes to our shared British heritage. I like Shakespeare, and Nick Hornby, my dad likes Steven Gerrard and David Beckham. I think that imperialism, wrong for a variety of reasons, was still the best thing to happen to British cuisine, while my dad genuinely enjoys mince pies and mushy peas. I was raised in Canada, so I say soccer: he's a diehard fan and despises any term besides football.

Despite these quarrels, there is one thing we absolutely agree on when it comes to Old Mother England: that fish and chips are one of her greatest gifts. Flaky, hearty fish, savoury potatoes and tangy vinegar: fish and chips are as good for the soul as they are bad for the heart. I can't think of anything else so wonderful that comes wrapped in newspaper.

Many of my childhood weekends were spent sourcing good fish and chip shops, my father cursing Canadians and their culinary complacency. "This one wouldn't make it a day in England!" or "Bollocks, bollocks, bollocks!" were his most common assessments. While my father raged, my mother would cower in shame and my sister and I would cope the only way we could, hitting the tartar sauce hard. Once in awhile we'd find a good spot, and our family's peace and dignity were preserved. Captain John's in Owen Sound, Townline Fish and Chips in Orangeville, and Penrose Fish and Chips on Mt. Pleasant stand out as favourites. More frequently, though, my sister and I would leave the restaurants feeling vaguely shamed, our very Canadian-ness an impermeable link to the failures of inferior fish.

At $5.49, for cod and chips, the lunch special appealed to both my palate and my budget. Less attractive was a $.75 charge for tartar sauce, but old habits die hard, so I ordered the sauce, and pitched in another $.75 for coleslaw.

It was not long before the disappointment and shadows of my youth settled in to greet me. My sorrow at soggy cod in bland batter, and coleslaw swimming in excess of oil was relieved only by the reassuringly tasty chips, and the familiar tang of tartar sauce. If fries were the measure of a fish and chip shop, then Chippy's would be doing alright. But we all know that a fish and chip shop is only as good as its fish, which means Chippy's is not very good at all. 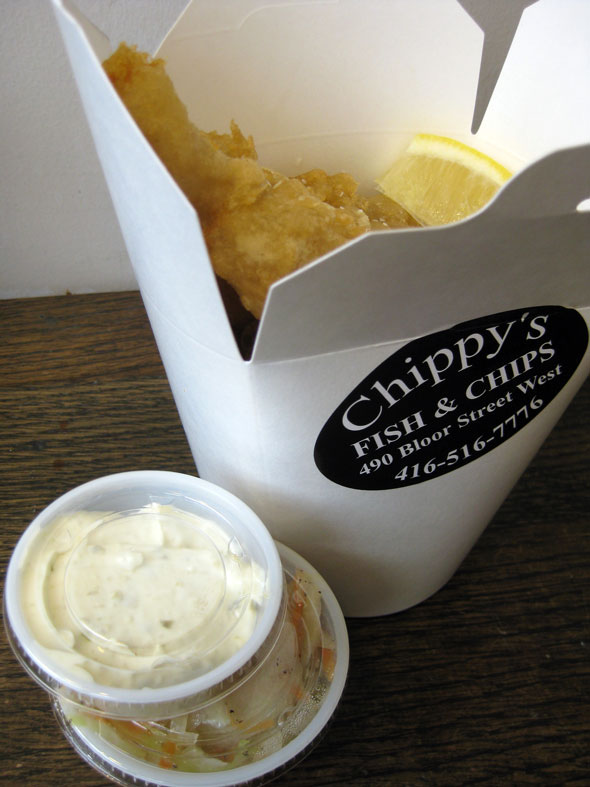 Despite my totally lackluster lunch, it seems that Chippy's has a fairly large following in this city, and it's possible that I might be invited to dine there again. Before old demons rear their ugly heads, I'm preparing myself for how I'll react if that time comes. Will I adopt a stiff upper lip, close my eyes and do it for England? Not blooming likely! In the event that a friend invites me to eat Chippy's again, I will politely tell them, "No thank you," and go see a therapist instead. 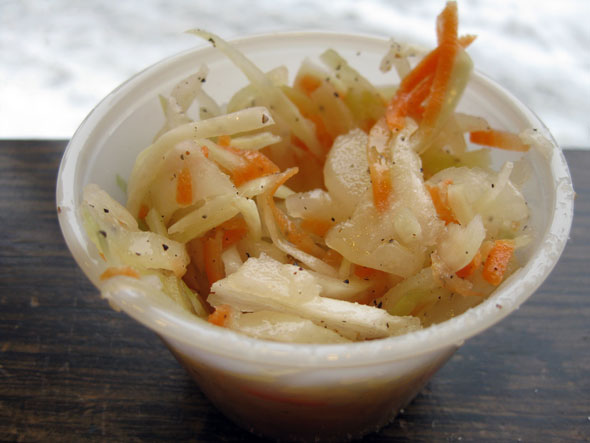