Chino Locos has carved out a spot in a Toronto burrito market as saturated as the demand for more Beatles biographies by using surprising ingredients normally associated with Asian cuisine like shitake mushrooms and chow mein. They offer a wide variety of unique one-size burritos including what might be the best fish burrito in the city. Called "Da Finest", it comes packed with sauteed white fish, guacamole, tomatoes, edamame beans, red onions, black beans, green peppers, cilantro, cheese, sour cream and chipotle sauce and costs only $6.99.

Also on the menu is "Sweeeeet" with slow roasted pork, Pollo Loco (chicken), Off Da Hook (ribeye steak) and two vegetarian burritos. Not to be missed is their Weekly Loco Special which in the past has included jerk pork (amazing), seared and deboned Asian pork chops and curry Singapore seafood.

On a recent visit to their newly opened Church St. location ( the original is in Leslieville), I opted for the Biggie Bean burrito ($6.99) with chow mein noodles, guacamole, tomatoes, edamame beans, black beans, green peppers, cheese, sour cream and chipotle sauce on a white tortilla. After making the mistake of getting a medium spiced burrito in the past wherein all the fiery hot sauce was waiting like an explosion at the bottom of the burrito, I went the mild route. 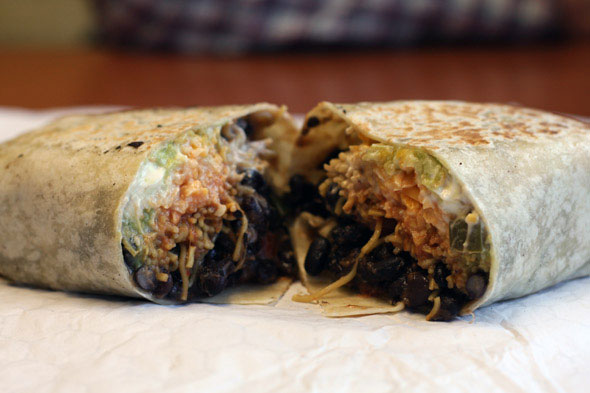 After around seven minutes the burrito was ready, grilled and warm tucked inside its little foil sleeping bag. The chipotle sauce was campfire smoky and the carb-on-carb combo of chow mein noodles and tortilla an empty calorie addicts dream. The edamame beans were the greatest topping in the mix, adding a familiar soft crunch.

Where the second floor Church St. space improves on the original is the seating. Unlike the Greenwood location, which only has a small bar for seating (and a tiny patio in the summer), this new space has indoor seating for around 20 customers. But It may take a little while longer to transfer the bright and busy feel of the first location into the less than cozy light walled second floor space. Nevertheless, the service was as enthusiastic as you'd expect with two of the three owners running the show on this Sunday afternoon.

When I returned home from my venture, my roommate had coincidentally stopped by the Chino Locos down the street and ordered a burrito with noodles for the first time. I sat next to her on the couch while I waited for her to finish before we watched the appetite stealing documentary The Cove . She took her first bite and paused for a few seconds before saying, "I thought this would make the burrito good but I can't believe how delicious noodles in a burrito is." 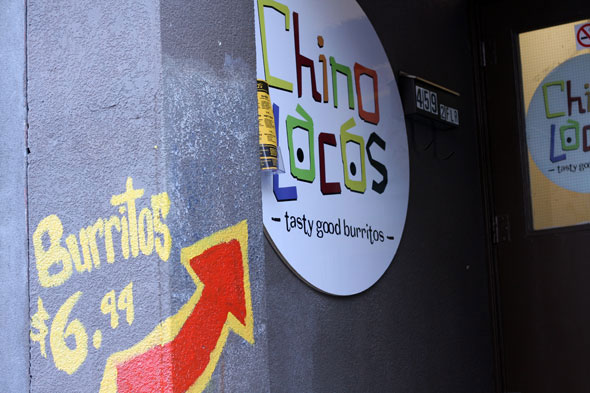