Cafe Cancan is a beautiful French bistro on Harbord that's affiliated with the Italian-by-way-of-New-Jersey Piano Piano across the street.

Co-owners Victor Barry, his wife Nikki Leigh McKean and Brendan Piunno (formerly of Carbon Bar) have taken over what was previously the much-loved Harbord Room, wanting to do justice to the space and carry on its legacy, but in their own way. "I wanted to make sure it stayed awesome," says Barry. 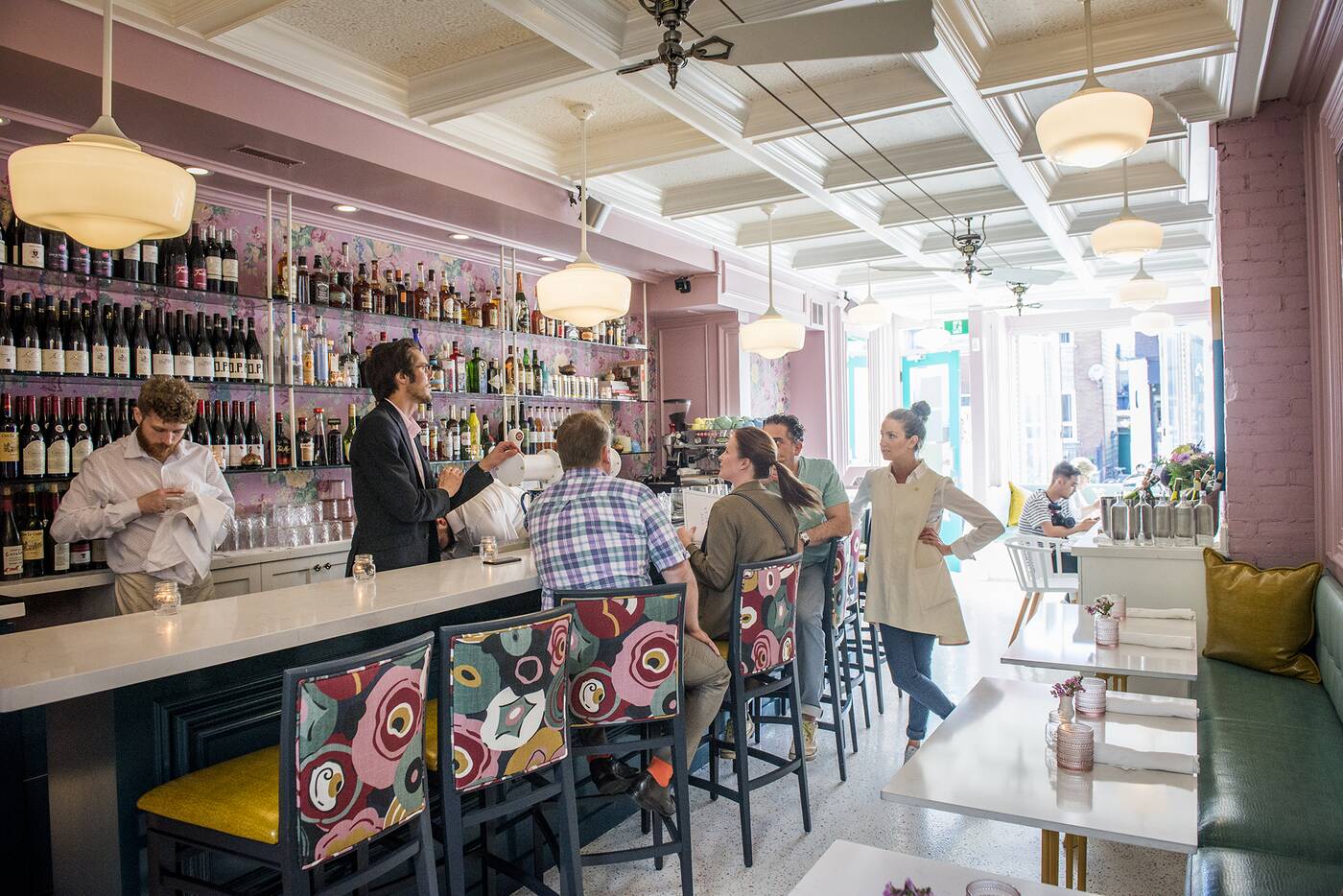 They enlisted Tiffany Pratt to design the room (she also did Piano Piano), and she's created a bright, light and airy spot that's undeniably pleasing to the eye.

It's full of colourful pastels, florals and flamingos, along with cute little details like patterned duck decorations that open up to double as a container for presenting the bill. 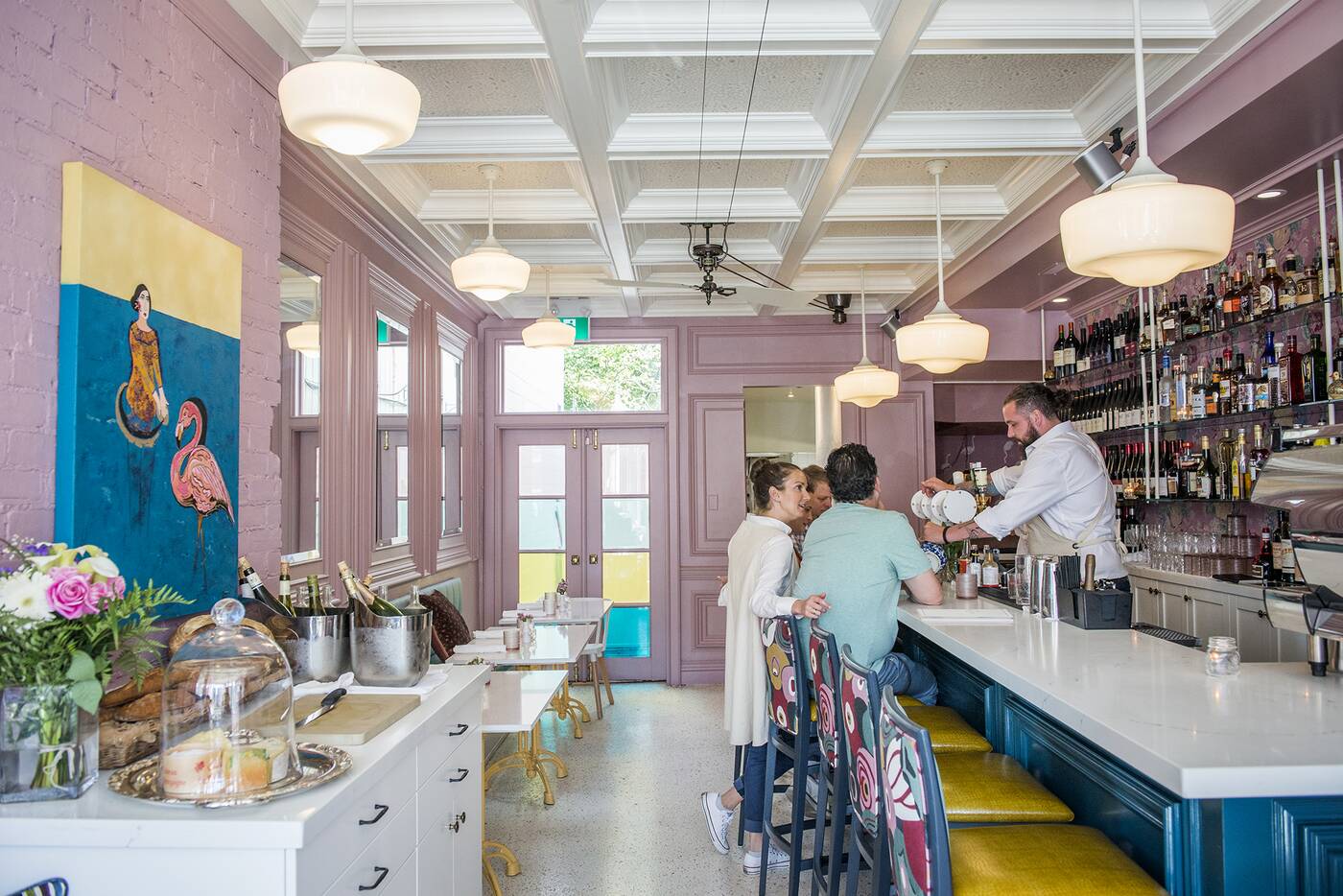 Thirty can be seated inside, including at banquettes towards the back, where pairs are meant to be seated side by side instead of facing one another, to create an even cozier and intimate vibe.

There are also seats along the bar, a few tables at the front and a new post-Harbord Room addition: a lovely semi-private flamingo "room"/nook in the back that can seat four to five patrons comfortably. 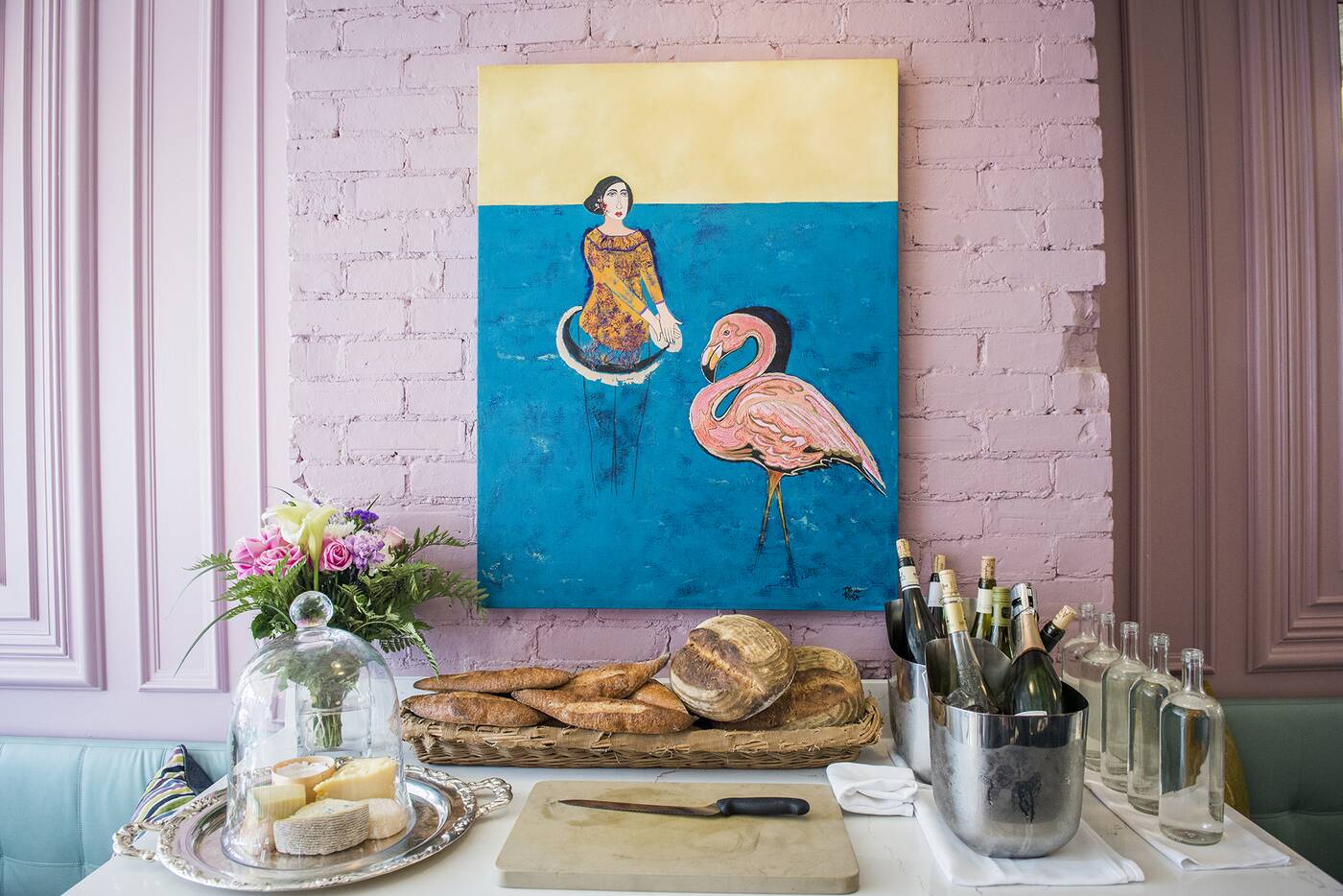 Barry tells me their goal is to make delicious, "reined in" French food that isn't overwhelming for diners. His specialty is "cooking food that everybody knows but making it a little different – better, tastier"; in short, taking familiar food and improving it.

Classic French dishes like escargot, French Onion soup and steak au poivre can be found on the menu, along with Barry's Burger (a nod to The Harbord Room's well-known version, and to carry on the tradition of having one here). 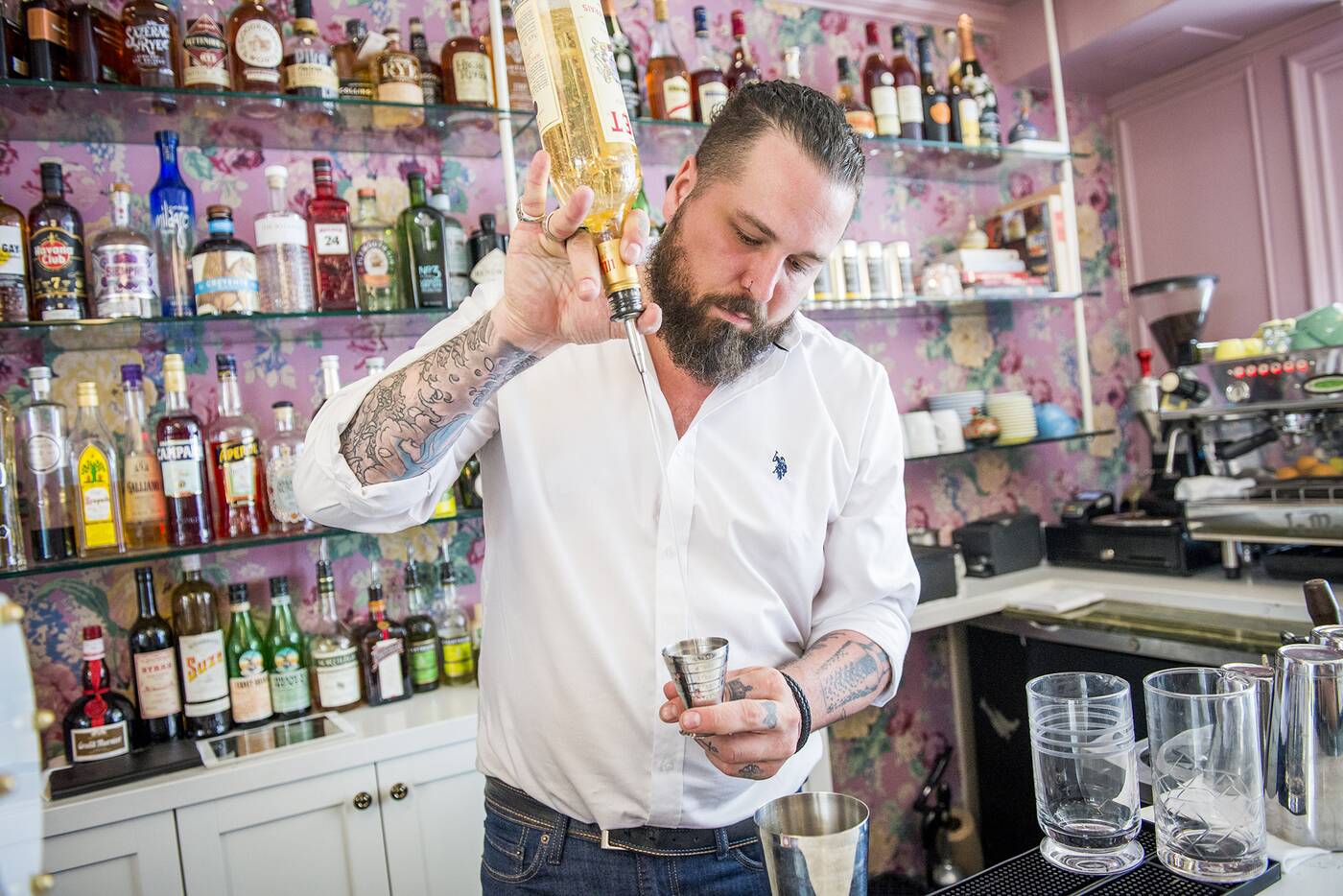 As for drinks, they've got "everything from Bordeaux to Beamsville" in terms of wine, Piunno says. There's lots of bubbly and Champagne, including $100 bottles of Perrier-Jouët Grand Brut.

With cocktails, bar manager Justin Shiels has the option of low-proof, easy-sipping (and much more affordable) cocktails for $6-7, in addition to classics with a higher alcohol content for $12-15. 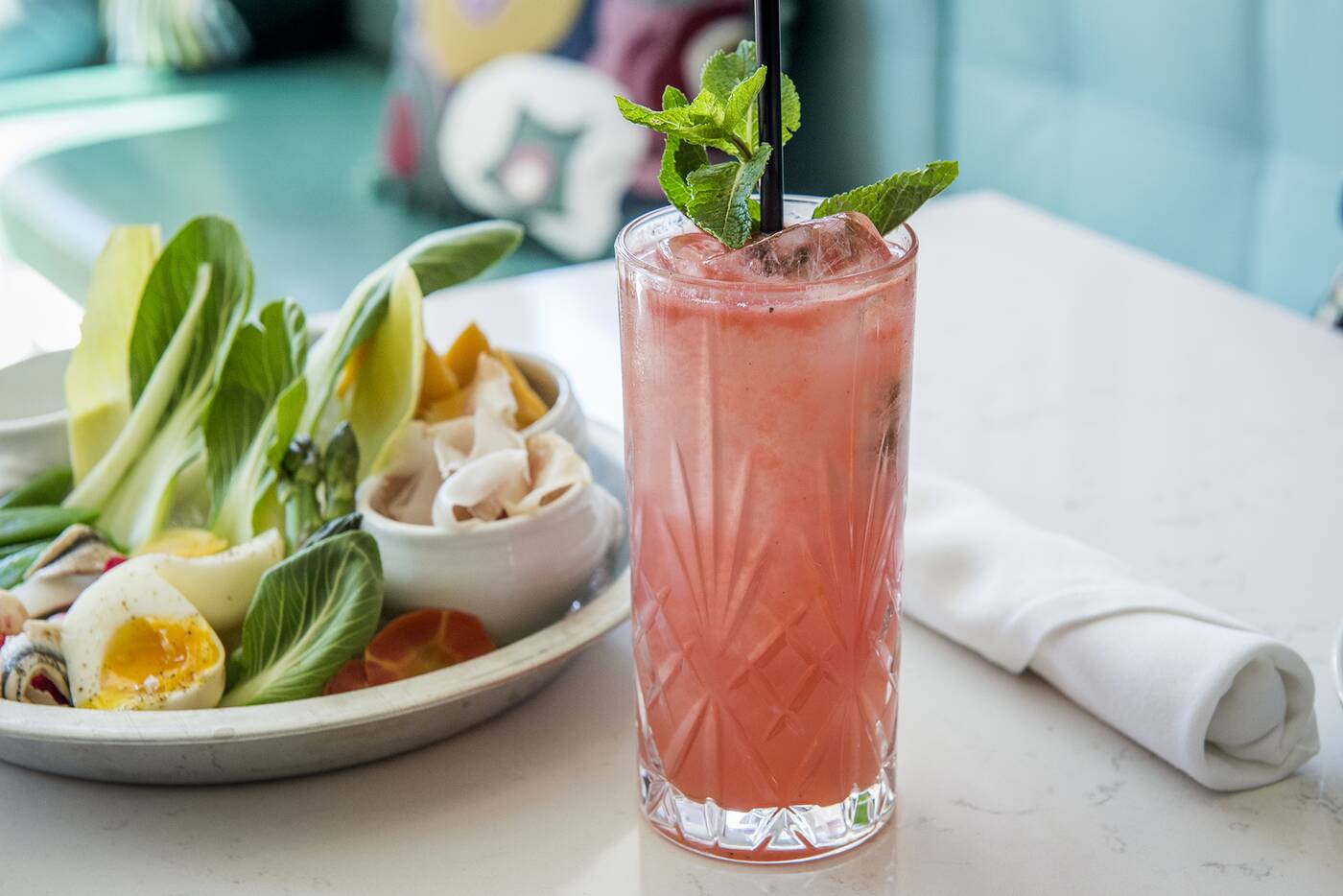 From the lower proof aperitif cocktails, I try the High Noon ($7), which contains Lillet Blanc, watermelon juice, mint, lemon, a chili tincture and agave. It's refreshing and ideal for drinking in warmer weather. 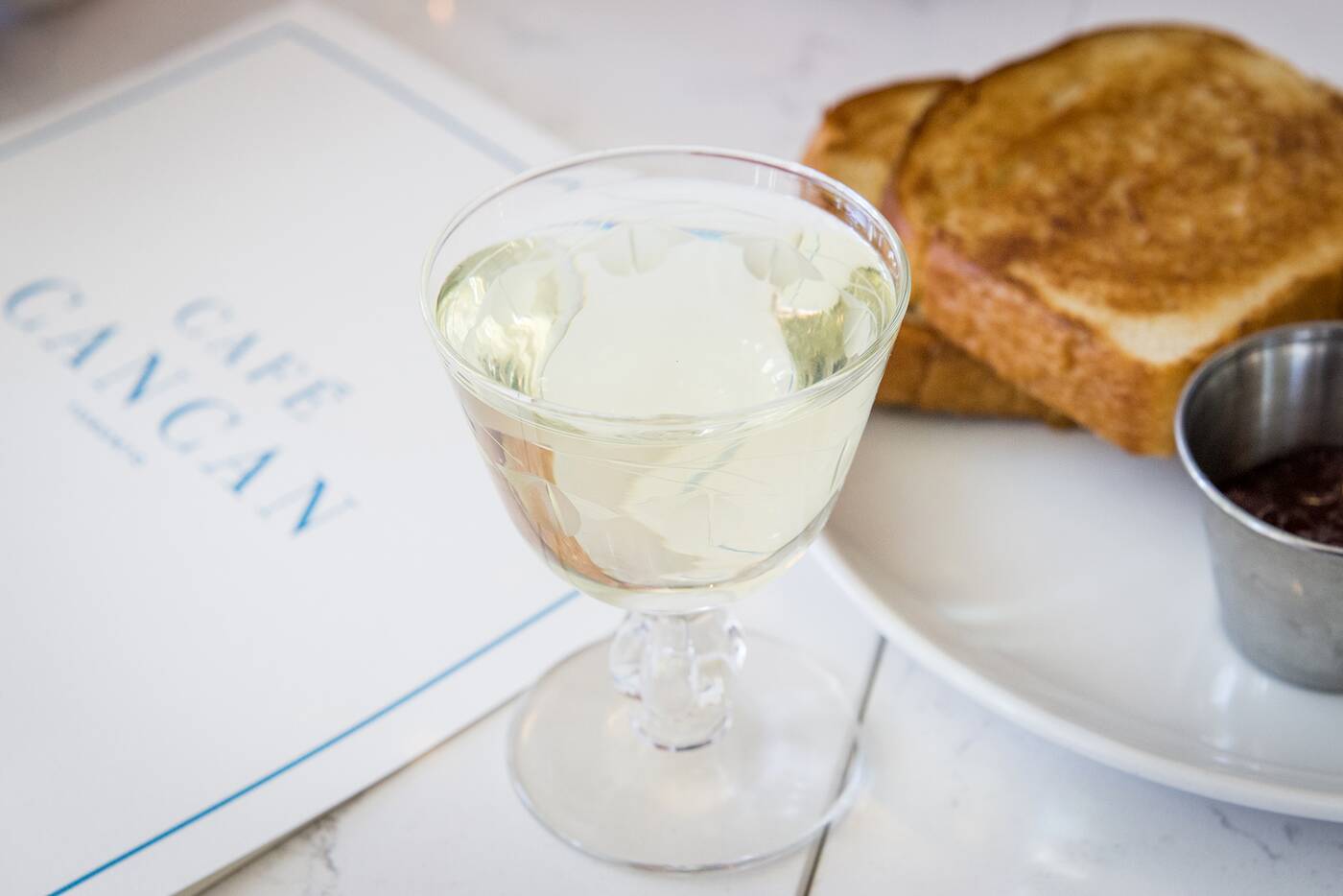 However, I'm most impressed with the Fino Colada ($14), a more refined version of a piña colada; when we visit, Shiels hasn't put it on the menu yet, but he definitely should.

A combination of Havana Club three-year rum, Tio Pepe Fino sherry, coconut cream, pineapple juice and lime juice, this drink revives the ages-old bartender's technique of clarifying the cocktail to give a creamy mouthfeel and make it taste silky smooth. 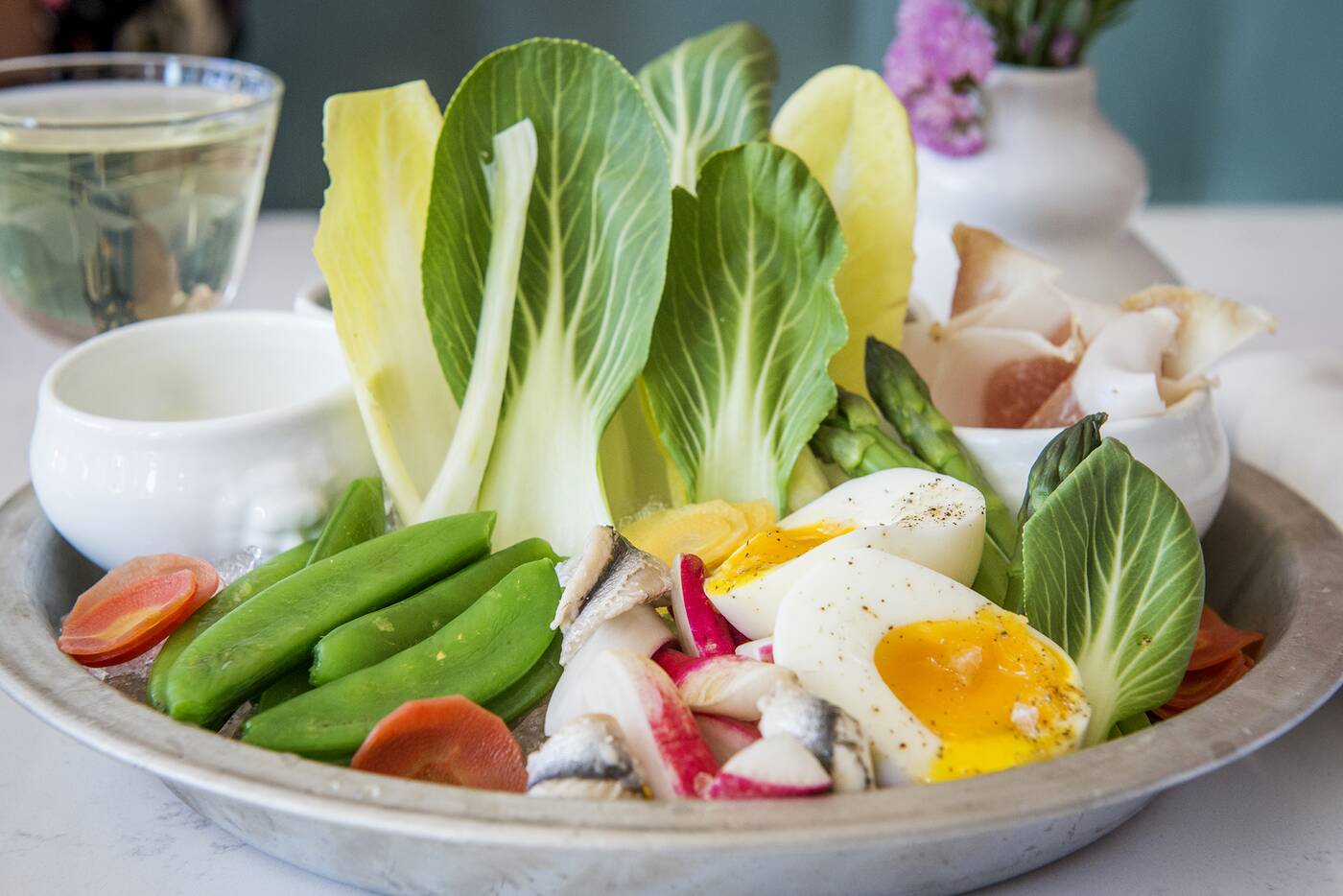 A play on crudités, this colourful dish consists of fresh, crisp and cold (they're plated on ice) seasonal veggies, plus salty boquerones, jamon, soft-boiled egg and Beemster cheddar, all accompanied by two dips – one buttermilk, one chimichurri. It works well as a shared starter. 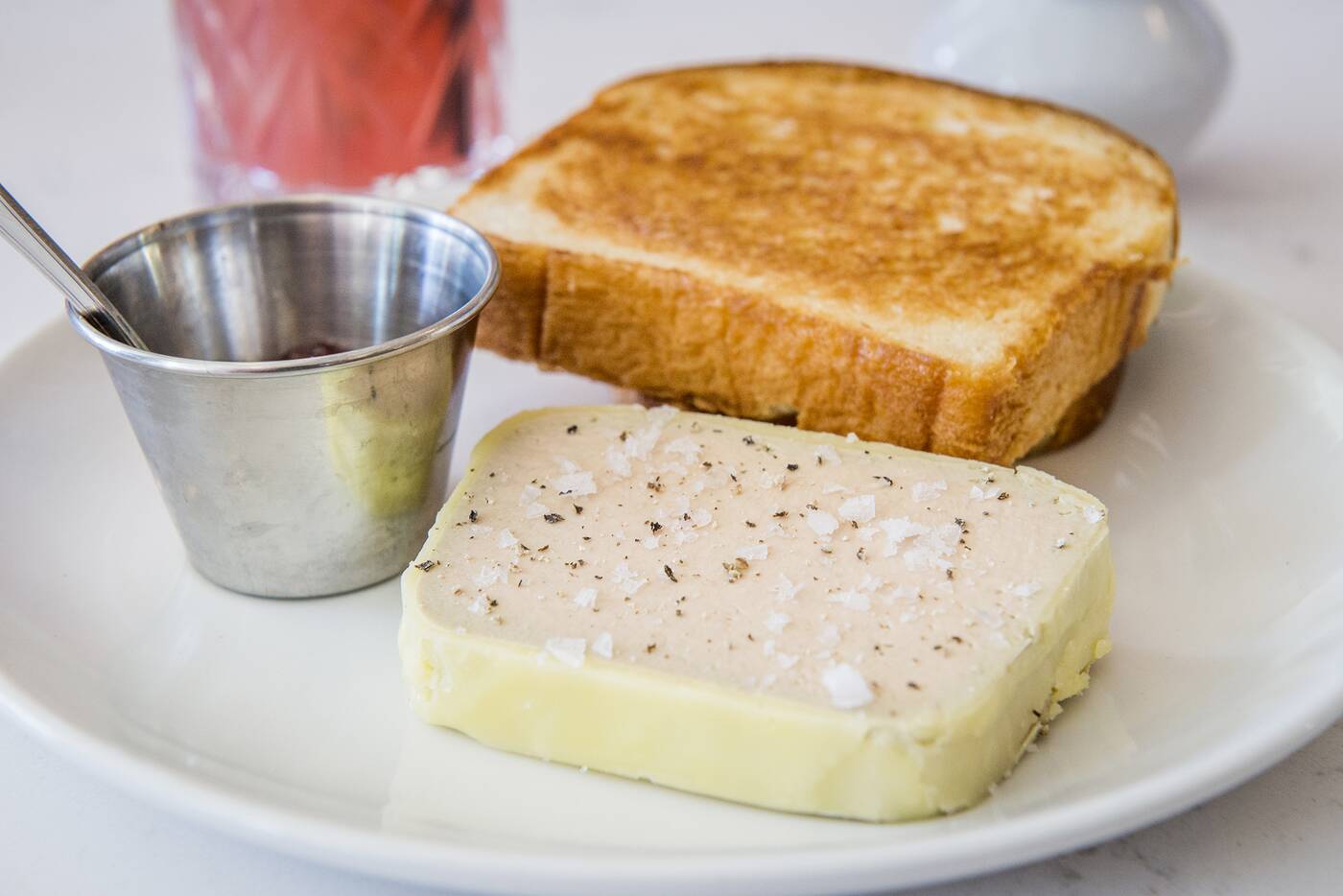 Since this is a French joint, it only makes sense to have foie gras, and here, you can order it four different ways. We get the foie gras parfait ($17), which arrives as a generous portion of pâté en terrine served with a thick slice of house-baked brioche and Greaves strawberry'n'rhubarb jam. 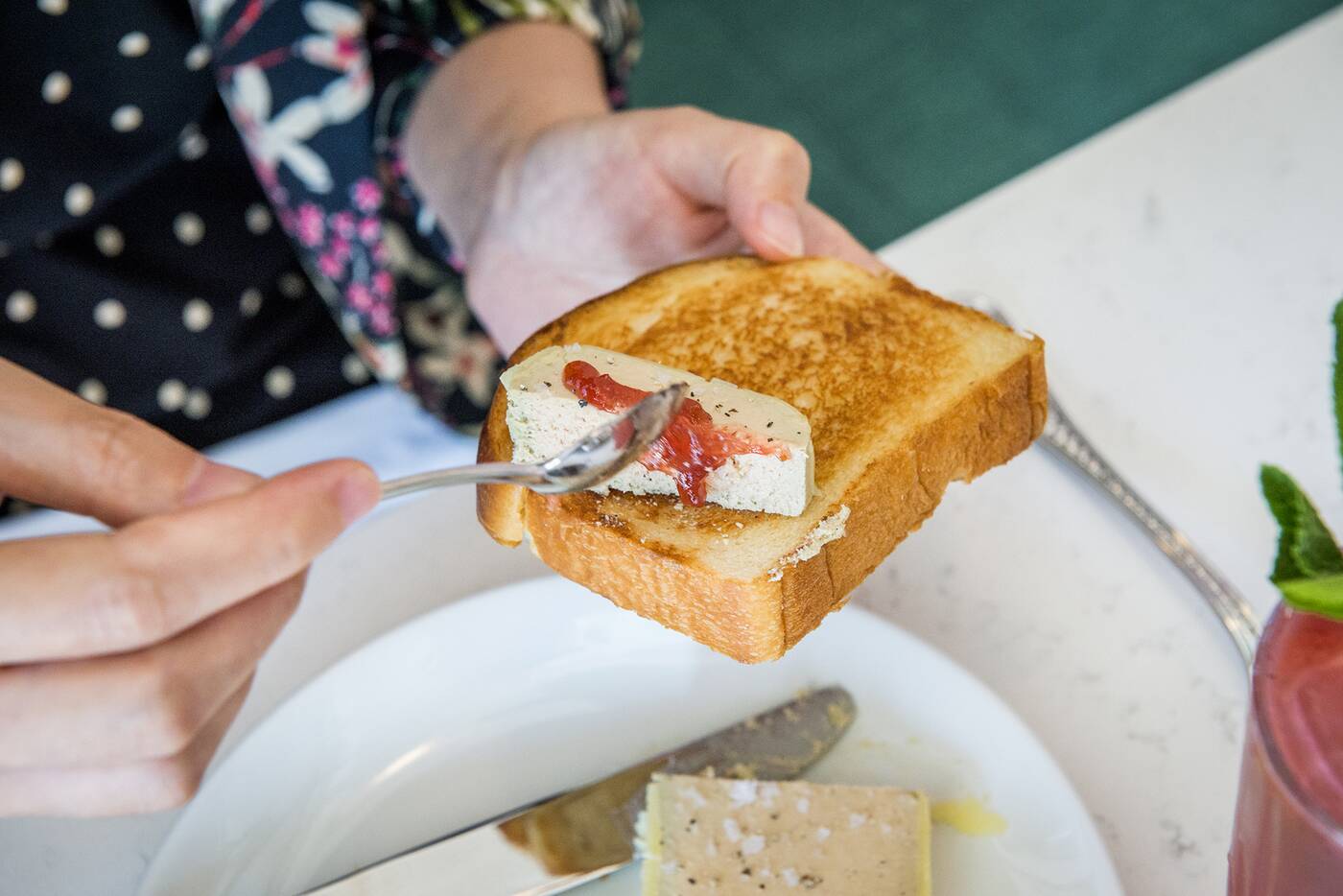 It's decadent and incredibly tasty, with the flavours and textures of the light, melt-in-mouth savoury spread, the sweet jam and the crisp-on-the-outside-yet-soft-inside baked brioche all combining together to make a delightful, sinful snack. 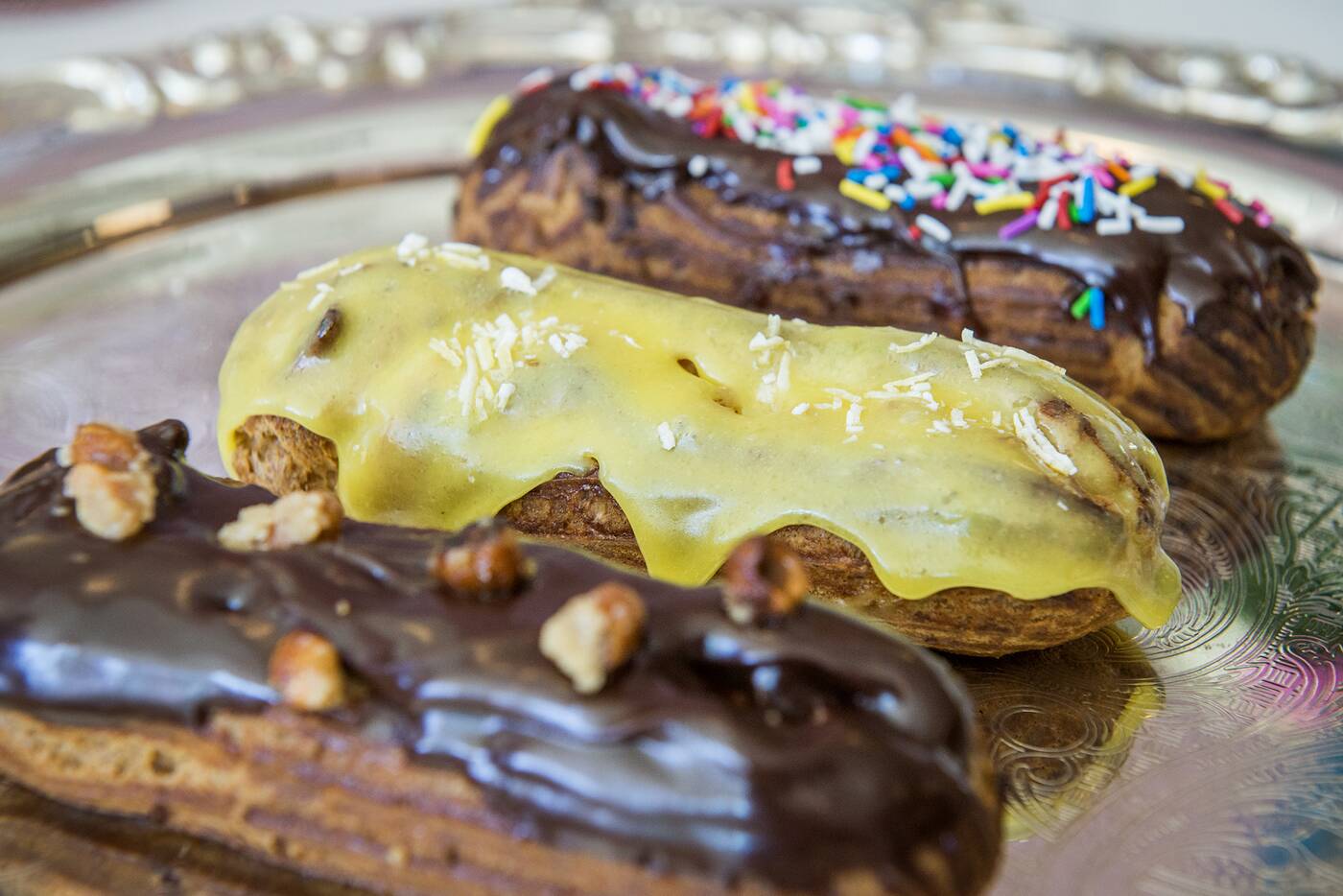 For dessert, we get three different kinds of eclair ($5 each): a birthday one filled with vanilla cream and topped with chocolate and sprinkles; lemon cheese cake with lemon curd, cream cheese glaze and confit lemon zest; and peanut butter, with milk chocolate and peanut mousse.

Like most everything here, all the pastries are house-made (although at Piano Piano, where they have bigger facilities). 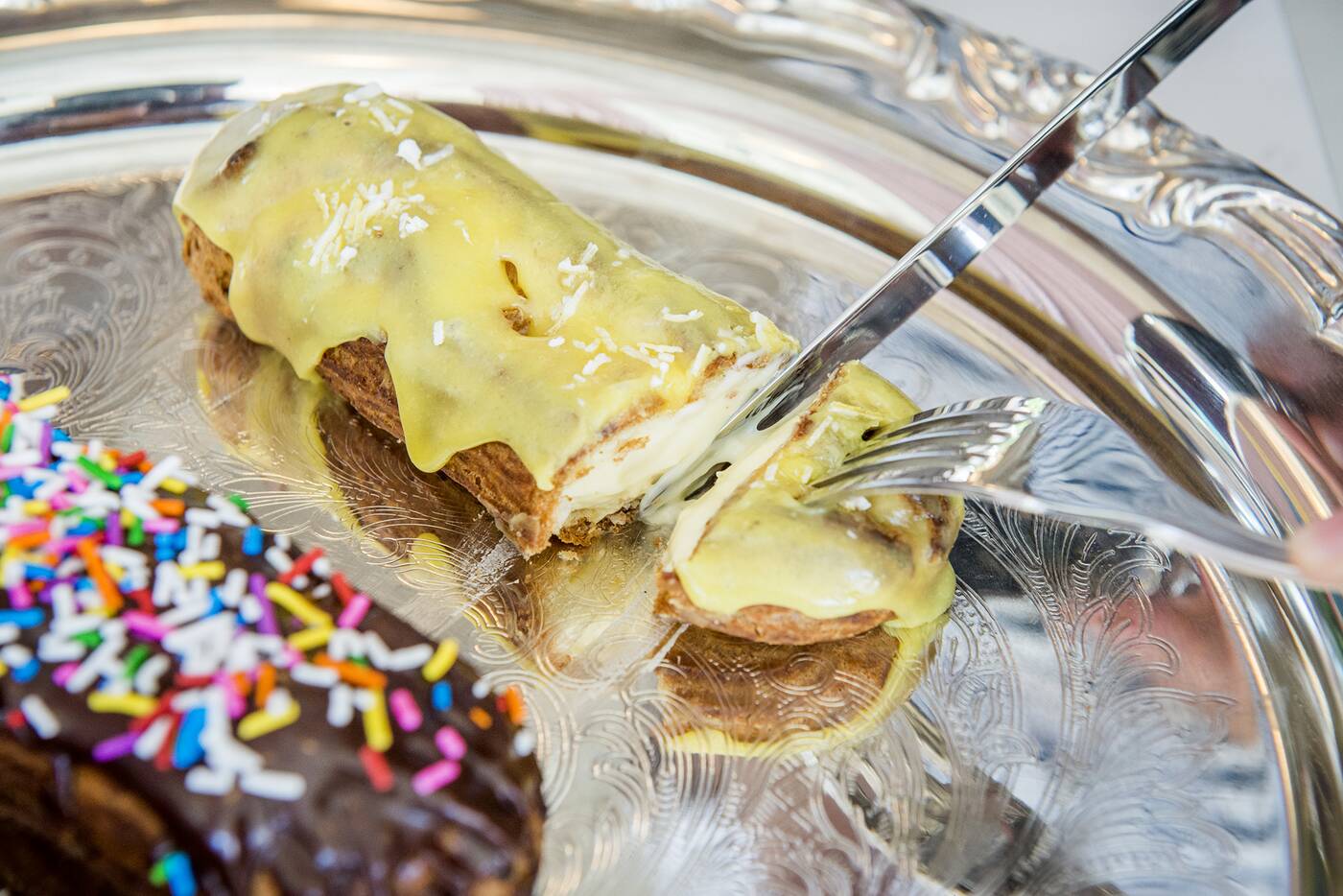 My fave is the lemon cheese cake; its lemon curd filling is pleasantly tart and bright, and as my friend tells me, is like a playful slap in the face, except for the tastebuds.

Intentionally named after a high-paced, choreographed dance, this successor to the Harbord Room wants to inspire the same kind of energy; combined with the design of the space, its service and its food, "it all came together, and it came together with all the right people," says Barry. 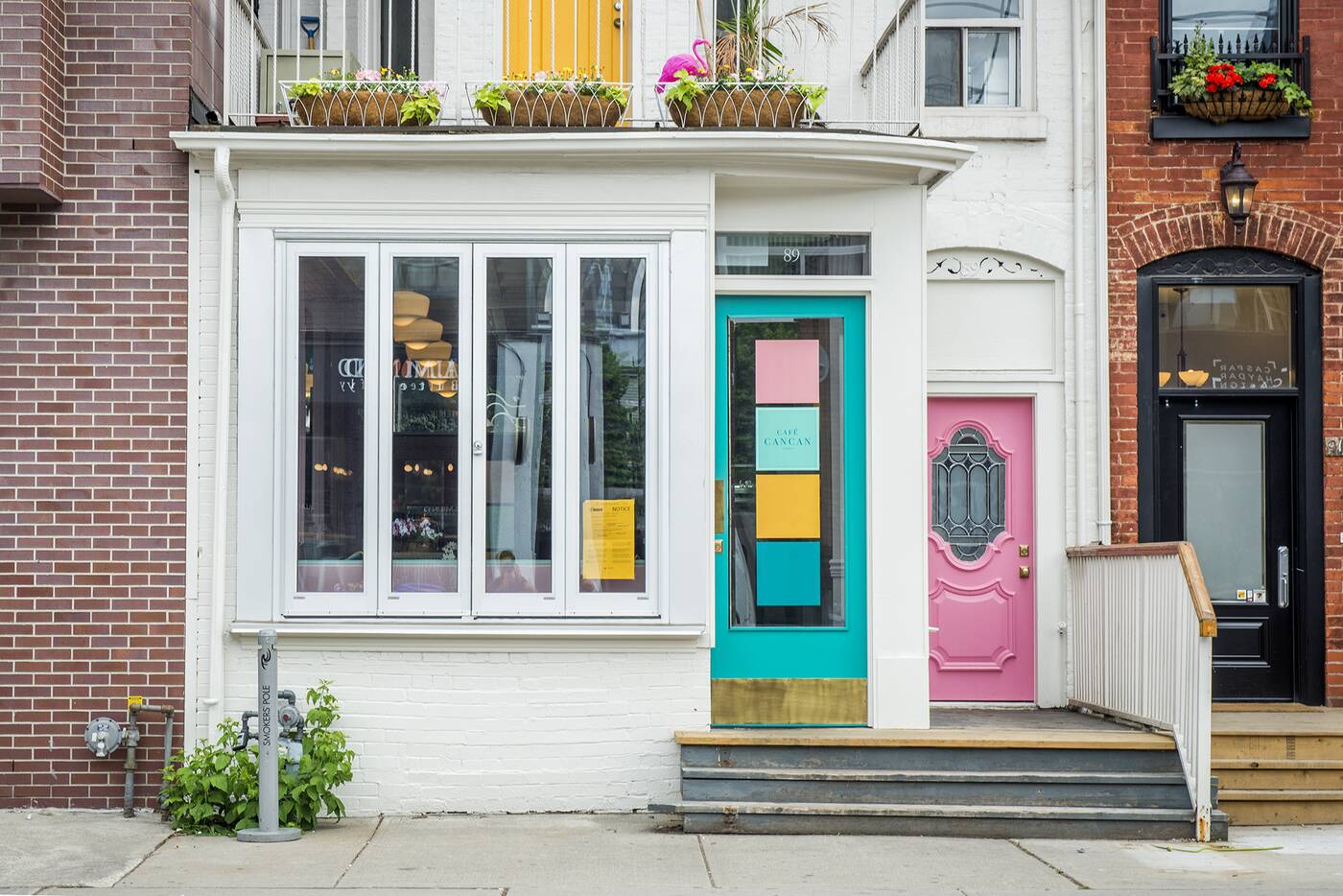