Luma is Oliver & Bonacini's upscale offering at the TIFF Bell Lightbox . Under the guidance of Executive Chef Jason Bangerter (formerly at Auberge du Pommier ), the restaurant seats around 130 and an additional 100 at in a lounge area, both of which feature floor-to-ceiling windows that face King Street just west of John.

With the sophisticated and understated decor -- lots of mirrors, wood and leather -- Luma is a natural destination for celebrity and corporate types during TIFF and beyond. During my stay, I spotted TIFF Director and CEO Piers Handling and his co-director Cameron Bailey taking in the new space, which one can imagine will be very busy in about a week. 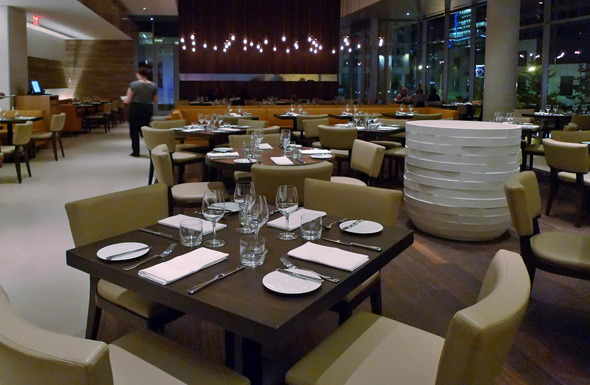 Although the menu my party ordered from lacked extensive descriptions of each dish -- the beef tenderloin, for instance, was labeled as just that, nothing more -- I did get a chance to sample quite a bit of food.

I started with tuna tartare, which was served with a delicate tomato water and just the right amount of ginger, vaguely hinting at an Asian influence, but without allowing it to overpower the dish. The gentle acidity keeps things light, while the tuna is just hefty enough -- unlike, say, salmon -- to recall the more beefy origins of the dish.

Recalling the superb Caesar salad at Biff's, my companion orders Luma's version and is not disappointed, calling the dressing the best that she's had. The presentation is elegant -- sadly, I don't have a photo -- featuring a head of romaine lettuce sliced horizontally (at around the halfway point) along with a quail's egg, thin shavings of Parmigiano Reggiano, lardon, and a few croutons. The one bite I'm offered turns into three, as I'm more than a little impressed by the creamy, garlicky goodness that is the dressing.

I also try the raw scallop ceviche (served as an amuse bouche rather than an appetizer), which rivals the tuna for its delicacy and subtle acidity. The scallop is served rolled out (for lack of a better description), and offers the most wonderful little hint of celery courtesy of a few tiny leaves sprinkled over top. Equally refreshing is the cold melon soup my partner enjoys, its fresh mint flavours rubbing up against the sweetness of the fruit. 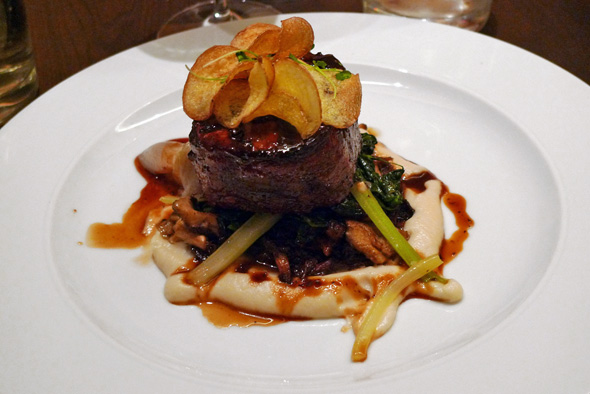 I play it conservative with my main, ordering a beef tenderloin dish that's quite similar to the one on the menu at Auberge (perhaps not surprising given Bangerter's time there).

Served atop a bed of mushrooms and a few morsels of braised beef -- I would guess cheek or rib -- with a Bordelaise sauce, it's executed flawlessly. And, at roughly two inches thick, the beef is even more buttery-tender than I expect. 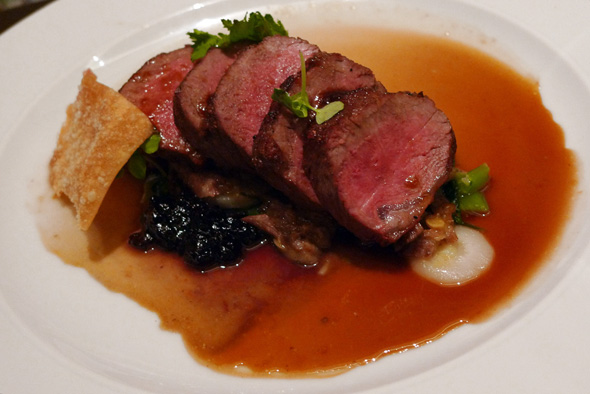 The boneless rack of lamb, which I do not try, I'm told is equally impressive. Indeed, all the folks at the table are delighted with their mains, which include a baked salmon, ricotta gnocchi in a tomato sauce, and a generous (out of the shell) lobster dish. 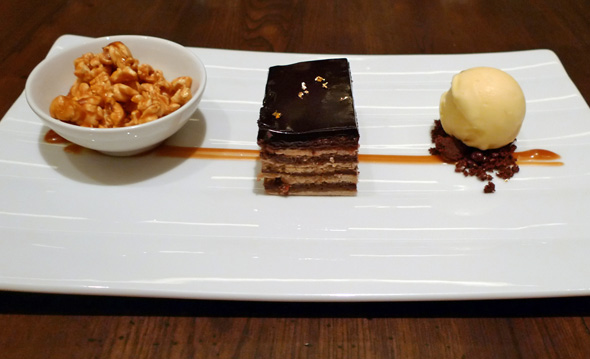 Dessert, which I rarely partake in, is a pleasant surprise. Much of the table orders the Opera Cake, the accompaniments of which reference the cinema-oriented surroundings.

Along with the cake, one receives pop corn-flavoured ice cream served on a bed of chocolate Pop Rocks and a small serving of homemade caramel corn. It's a playful dish, and the Pop Rocks and ice cream create a reaction in my mouth that puts a smile on my face.

Come to think of it, pretty much everything else I tried did that too. Luma, I suspect, will quickly win over the TIFF crowds upon its opening.