This is part 3 in a series where I attempt to discover Toronto's best burritos.

The latest stop on my journey to discover Toronto's best burritos has brought me up against a giant crystal. I speak of my spot on the second floor patio at the still "Now Open" Burrito Fresh, overlooking Bloor Street just west of the ROM's big new bling .

Burrito Fresh has been open for a while now. There is a review here from January and someone on Chowhound remarked back in December 2006 that this place is "best avoided, no debate", mentioning her burrito was "hugely disappointing, bordering on gross".

Not to be one to let other reviewers keep me away from perhaps discovering a darkhorse in the race for Toronto's best burrito, I saddled up next to a plug-in cactus light wating to be meted my deserved punishment, or maybe - just maybe - a surprise. 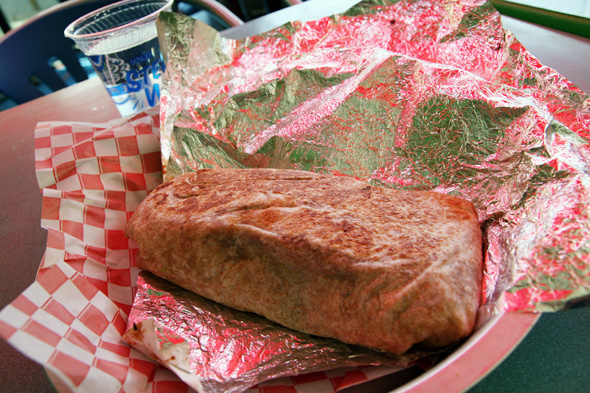 As it turned out I actually got both. The surprise started at the order counter where I was initially excited with the prospect of the shrimp burrito, less so after I realized the sticker price was $9.50. Instead, for $6.99 I took a chance on their soy meat burrito, reasoning if they're going to actually put a soy meat burrito on their menu they'd hopefully tested out a few recipes - and likely found a good one - in the process.

Rolled up and grilled with the usual array of burrito fillings (rice, lettuce, tomato, beans, salsa etc.) but sans guacamole (75 cents extra!), the burrito showed some initial promise with its hefty size. But moment later, as the burrito met the mouth I started to get that feeling I was back in grade school.

No, I'm not talking about any twinkie fights, looking up cute girls' skirts or debating about who had the better superhero lunchbox cover. Instead, it was the memories of a former food staple I had abandoned long ago - The Sloppy Joe .

I'm not suggesting there's anything inherently wrong with a Sloppy Joe. But given I've stopped eating cows AND am looking for Toronto's best burrito, it wasn't the experience I was hoping for.

If you're wondering what a Sloppy Joe burrito tastes like I'll save you the suspense - a Sloppy Joe. But in this case one that's sickly sweet. Waaaayyyy too much tomato paste and sugar which completely overpowered anything else inside the whole wheat tortilla. Not. Something. I'd. Recommend.

Others out there who are gluttons for punishment might be interested to know that Burrito Fresh also serves chicken, beef and veggie burritos ($5.75-$6.99) as well as similar varieties of nachos and quesadillas. 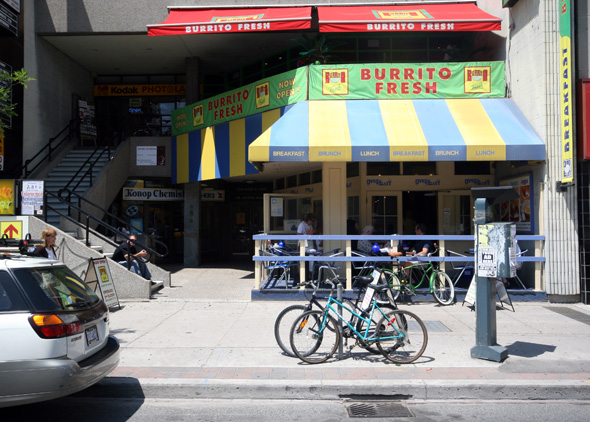 Previously in this series: Mexitaco and Burro Burrito