Burger Brats is situated between John and Duncan on Adelaide Street, fittingly sandwiched between Hooters and Crocodile Rock . The rock 'n' roll style street sign with kitschy photos of massive burgers got me excited about gorging on some serious burgers. It has a promising exterior and walking down the stairs to the basement, I expected to find a cheap burger joint with an extra flare. Instead I found a tacky, dingy basement with chipped, buttery mustard yellow walls with wood paneling. While it seems a reasonable amount of effort has gone in to the signage, both inside and out, the rest of the decor received zero thought unless "out-of-business-Chinese-buffet" is a style inspiration. 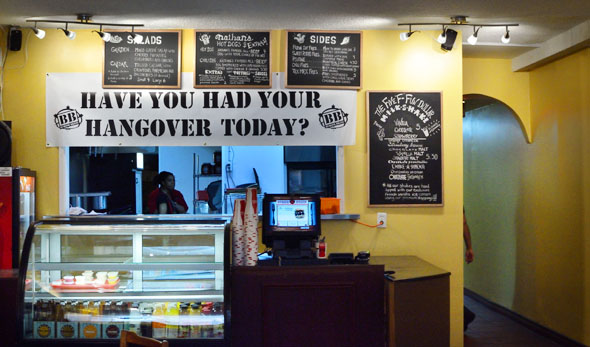 My best friend Allie and I stood at the board slightly bewildered, trying to choose among a myriad of options. Each burger has a theme with matching font and drawings attached; it's a fun touch to the menu but would probably come across better on a blackboard, rather than the white dry-erase board. 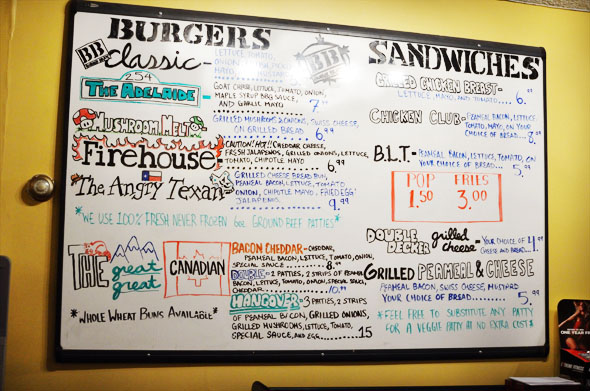 I decided to try the locally named Adelaide burger ($7.99 - top photo) with a side of yam fries. (The burger patty was perfectly cooked and juicy while slightly charred on the outside. The bun was exceptionally soft and didn't overpower the never-frozen burger patty. It came sauced up with a sweet maple syrup barbeque glaze and garlic mayo, a savory-sweet combo that certainly didn't need any extra ketchup.

Apparently it comes with goat cheese but I didn't detect any, even when I opened it up to look inside. The lettuce and tomato appeared to be "locally sourced" straight from a nearby Subway restaurant. The sparse shreds of iceberg lettuce were watery and nearly colourless as was the slice of tomato. The actual burger and the bun were quite delicious, but the pitiful quality of the vegetables and M.I.A goat-cheese were disappointing. 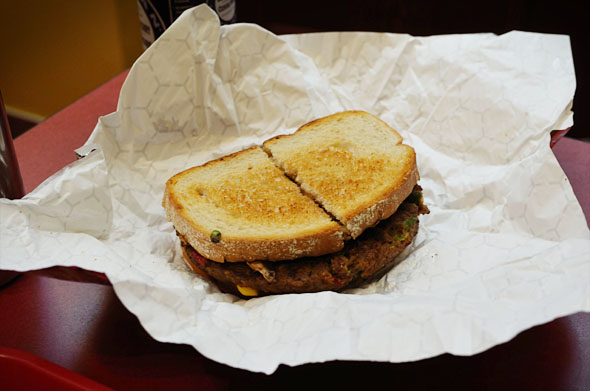 Allie went for a mushroom melt ($6.99) with a veggie patty and a Boylan's black cherry soda ($3.50). The mushroom melt was served on two sad pieces of cheap sandwich bread and overall looks and tastes like something you could make better at home yourself. There was a barely adequate amount of sauteed mushrooms with a sprinkling of onions and a factory-bought veggie patty.

We were looking forward to the yam fries ($4) which come with a side of mayo. It was a healthy serving but the fries were mushy and flavorless and the whole bottom layer were tiny bits of black burnt ends.

A couple of days later, I was in the mood for a burger and fries again, so I gave them another shot. The perky and friendly cashier working there the first time, was replaced by a different cashier who may or may not have been dealing with a serious hangover and was having trouble keeping the orders of the four other customers straight. I ordered the chicken 'sandwich' on a whole wheat bun ($6.99) with fries and a vanilla milkshake ($7 extra for the combo).

I was starving and luckily the food only took about 6 or 7 minutes to come out, held by a staffer looking aimlessly around the nearly empty restaurant and calling out an order number I had not been given. I recognized my order, quickly flagged her down and started picking at my fries while I waited for my milkshake straw. 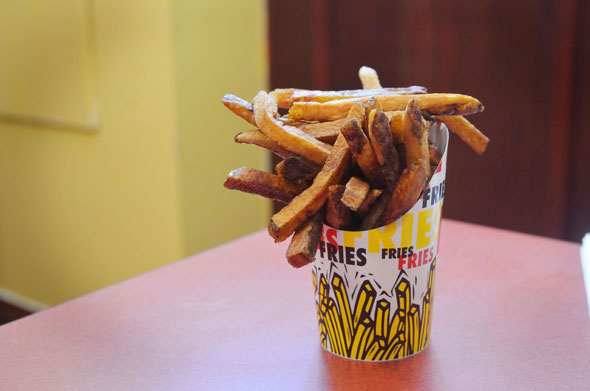 The fries were cut thick with the potato skins still on, but were lacking flavour and were mushy like the yam fries. 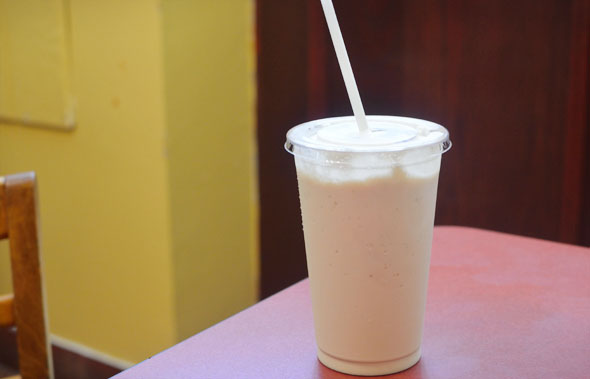 The "hand-shaken" milkshake was generously portioned and quite satisfying. The chicken was tender and flavorful, while the whole wheat bun was again warm, soft and not too big; the veggies made no improvements. 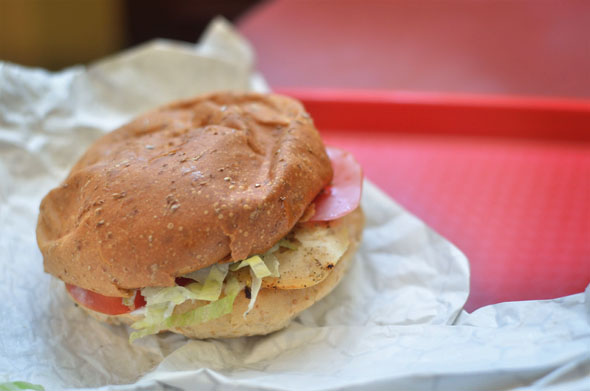 Burger Brats pride themselves on their never-frozen burgers, which are indeed a savory delight, but the cheap veggies have no business being beside their delicious patties. Similarly, the dowdy decor and radio commercials piping through the cheap sound-system, with a few Nickleback and Sum 41 songs thrown in, makes paying nearly $17 for a burger, fries and a milkshake, a little painful.

All burgers available with veggie patty 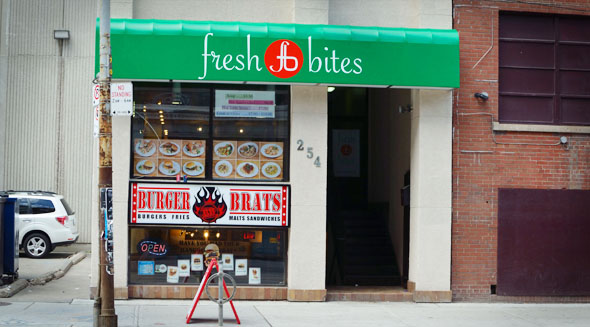