Bullseye Burgers N' Fries is a place where you can get a burger made from local food sources in and around Toronto.

All of their meat comes from down the road at Mister Greek Meat Market on the Danforth and their buns are from B&A bakery in Scarborough. 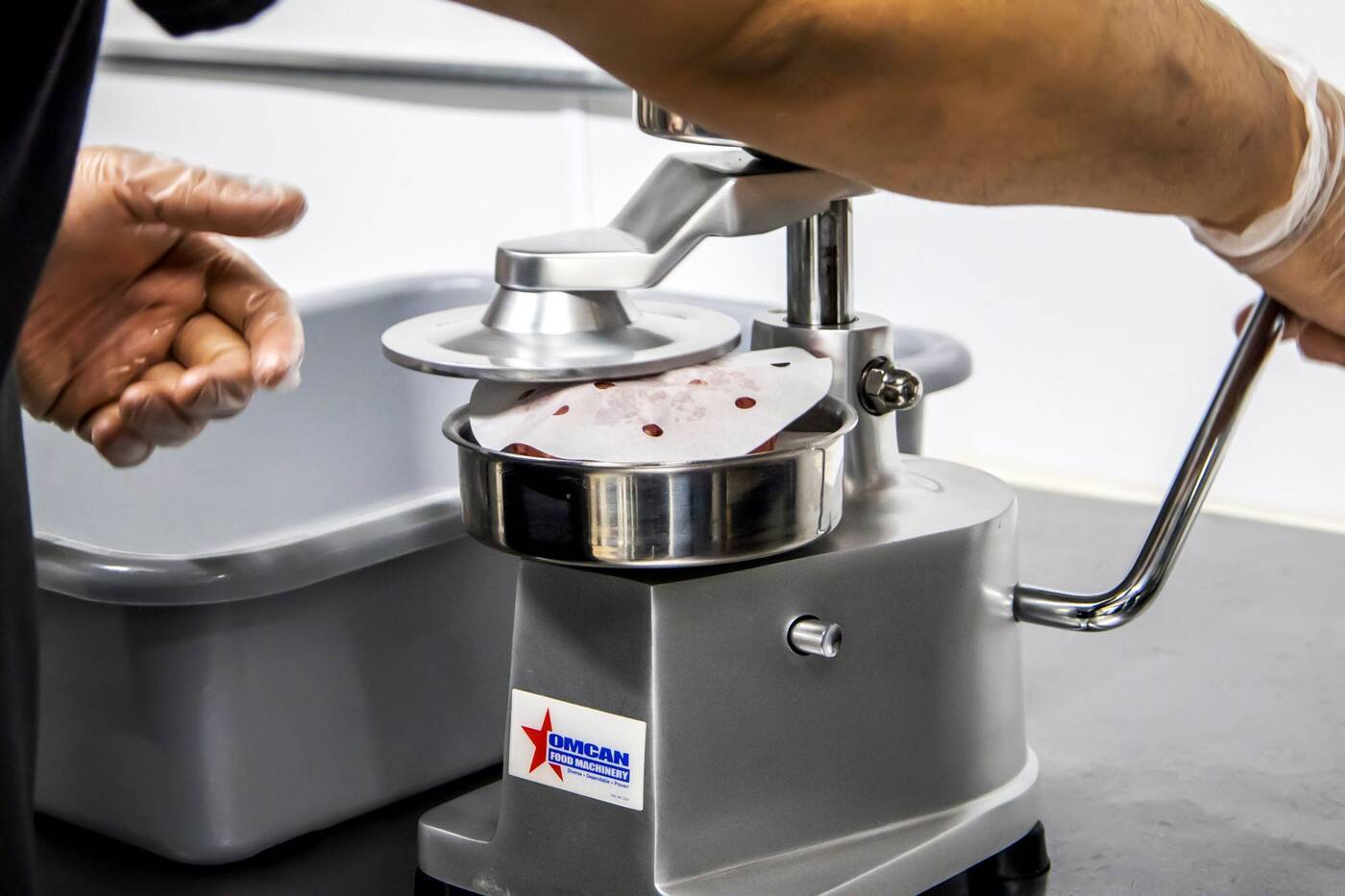 The meat for Bullseye burgers is prepped in-house, every morning its freshly ground, mixed with spices and then formed into singular patties, with a hamburger press patty maker.

The three owners behind Bullseye noticed smashburgers were all the hype in the city, with places like Rudy's Danforth being a favourite in the area. 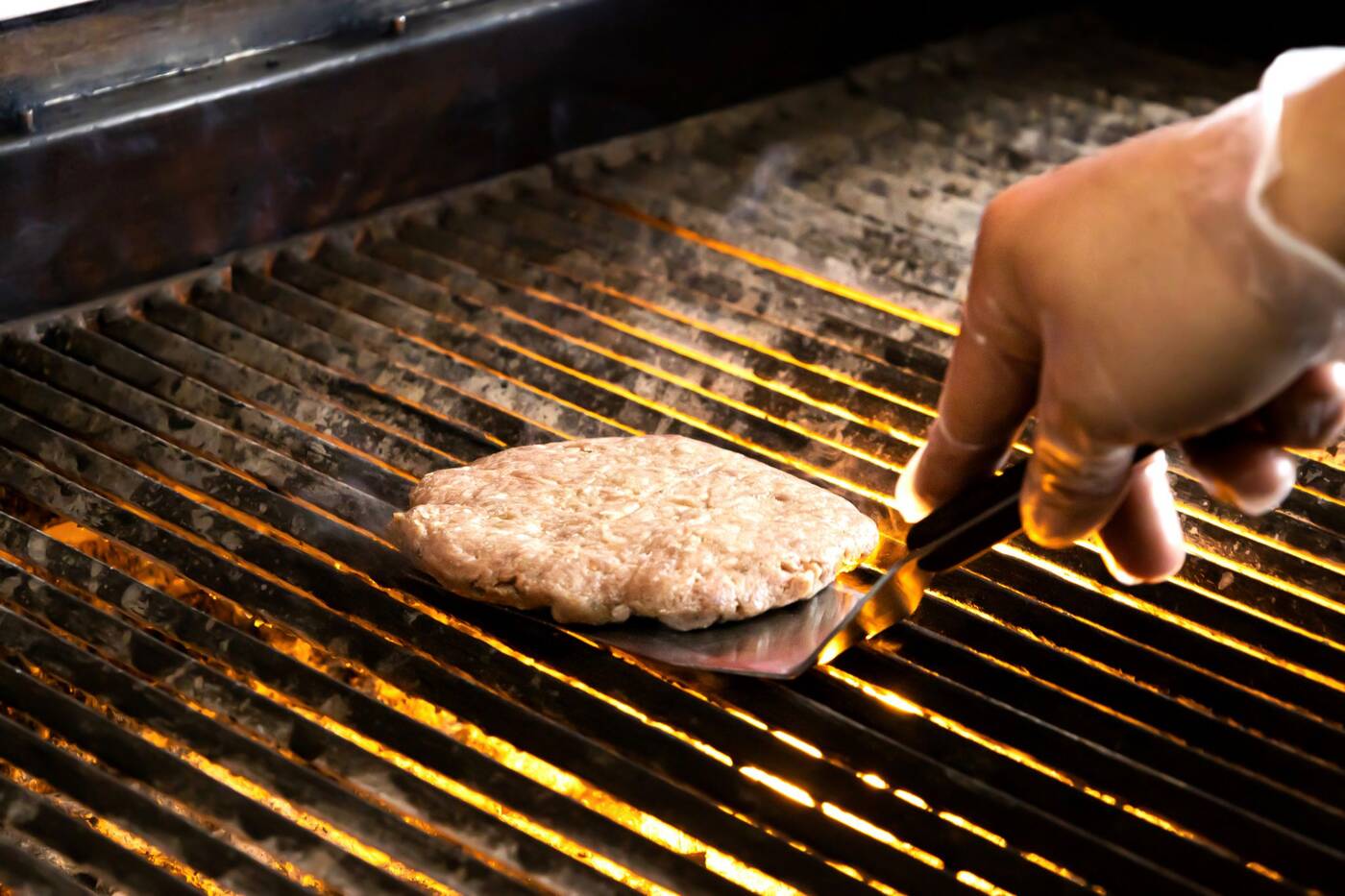 Instead of following the trend, they strayed away and kept things traditional. They wanted to make their burgers old-school by using a 1970's style charcoal grill to cook them. 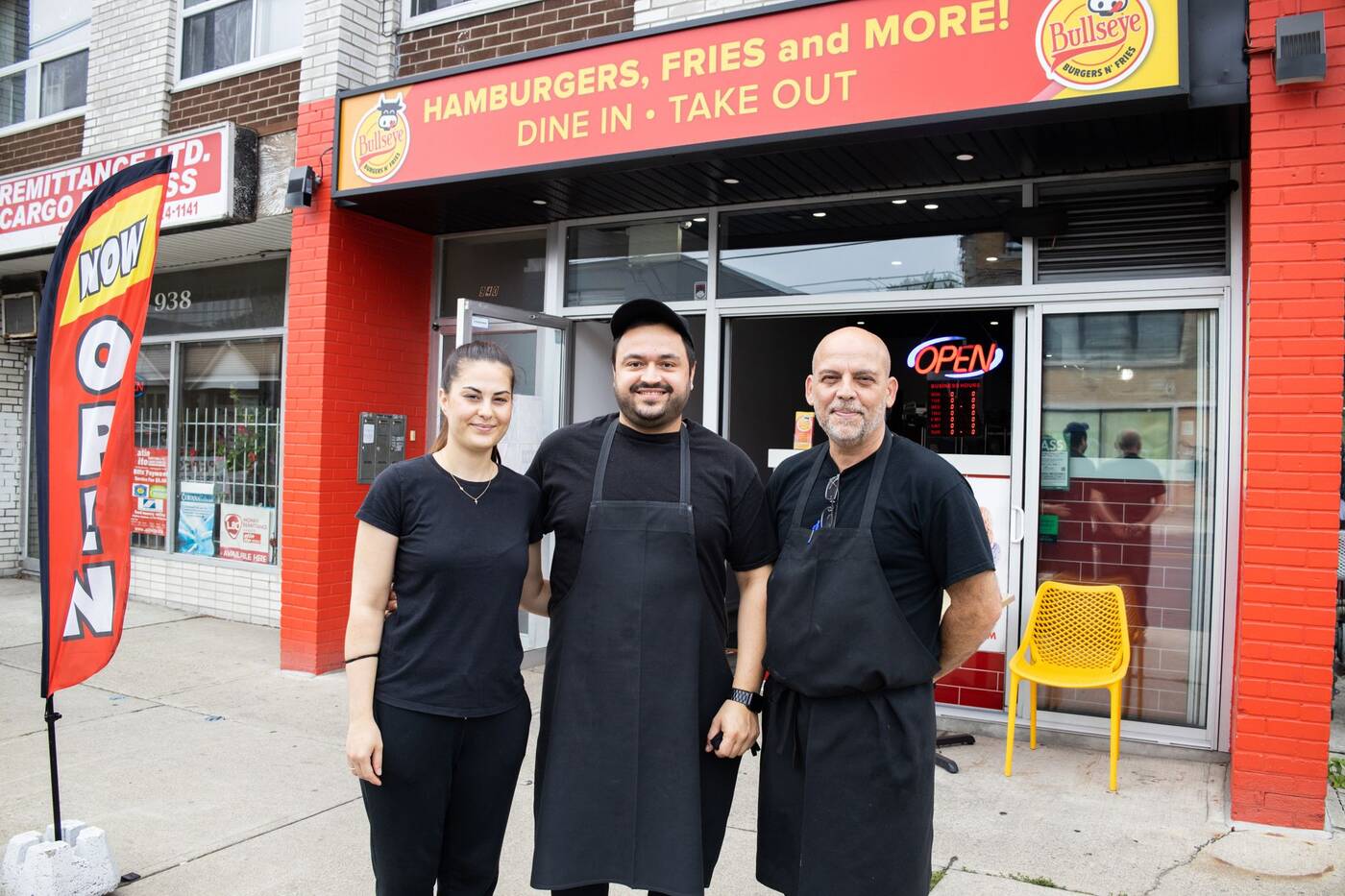 Co-owner Antoni Tsanakas had his own burger restaurant while living in Greece, but had some financial struggles there. He and and his wife Lamprini Prassa decided to move to Canada, and that's when they met co-owner Jim Tsironikos through a mutual friend.

All three of them had a love for food, with Antoni and Jim having decades of experience in the restaurant industry, they decided to open up shop at Bullseye in Spring of 2021. 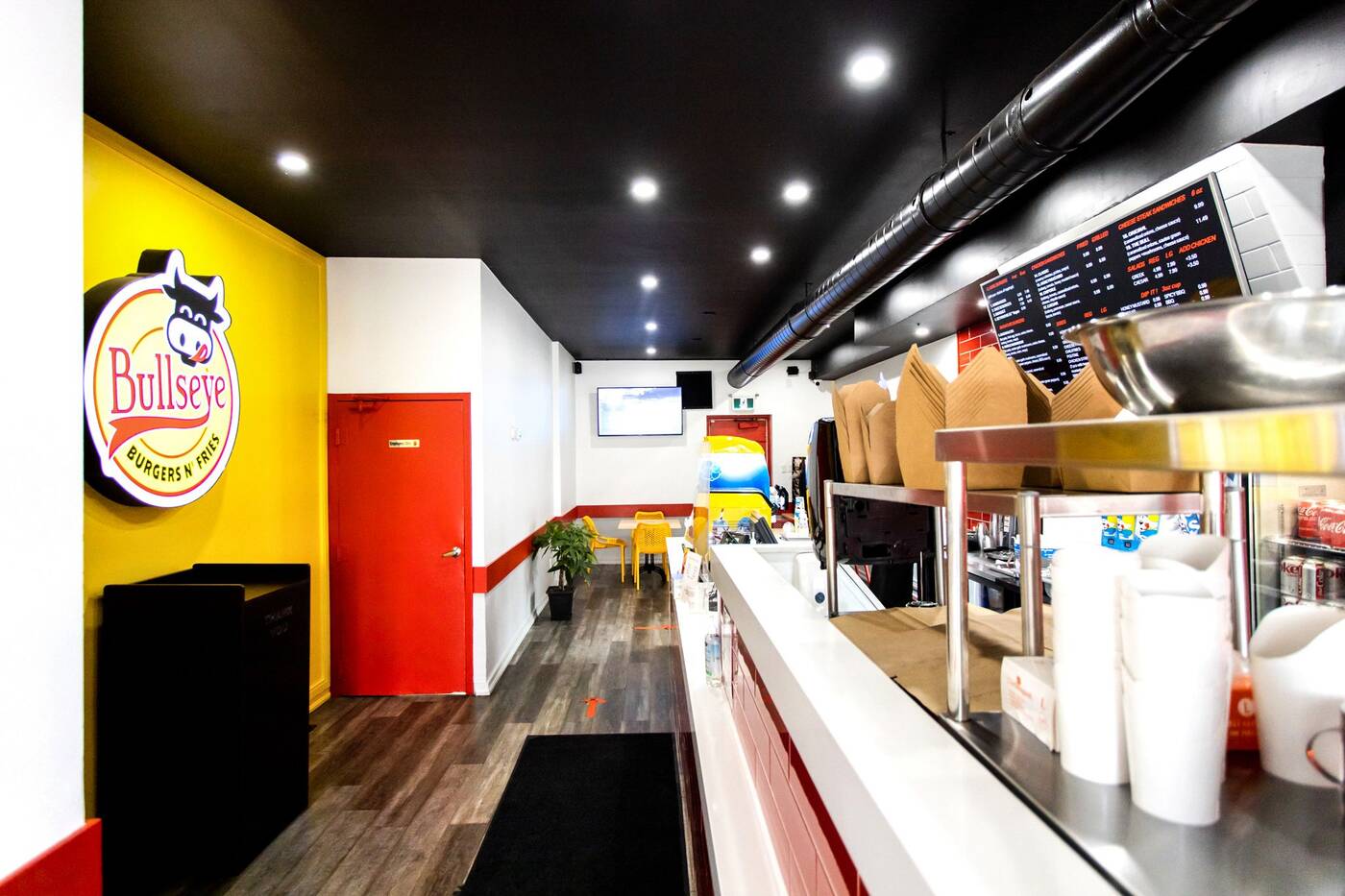 Red and yellow are two colour themes that are prevalent around the interior of the restaurant. My brain automatically associates this with fast-food giant McDonalds, but the burgers at Bullseye are much superior in comparison.

There's two tables in the back of the restaurant for people to dine inside, as well as a large side patio with seating for up to 20 people. 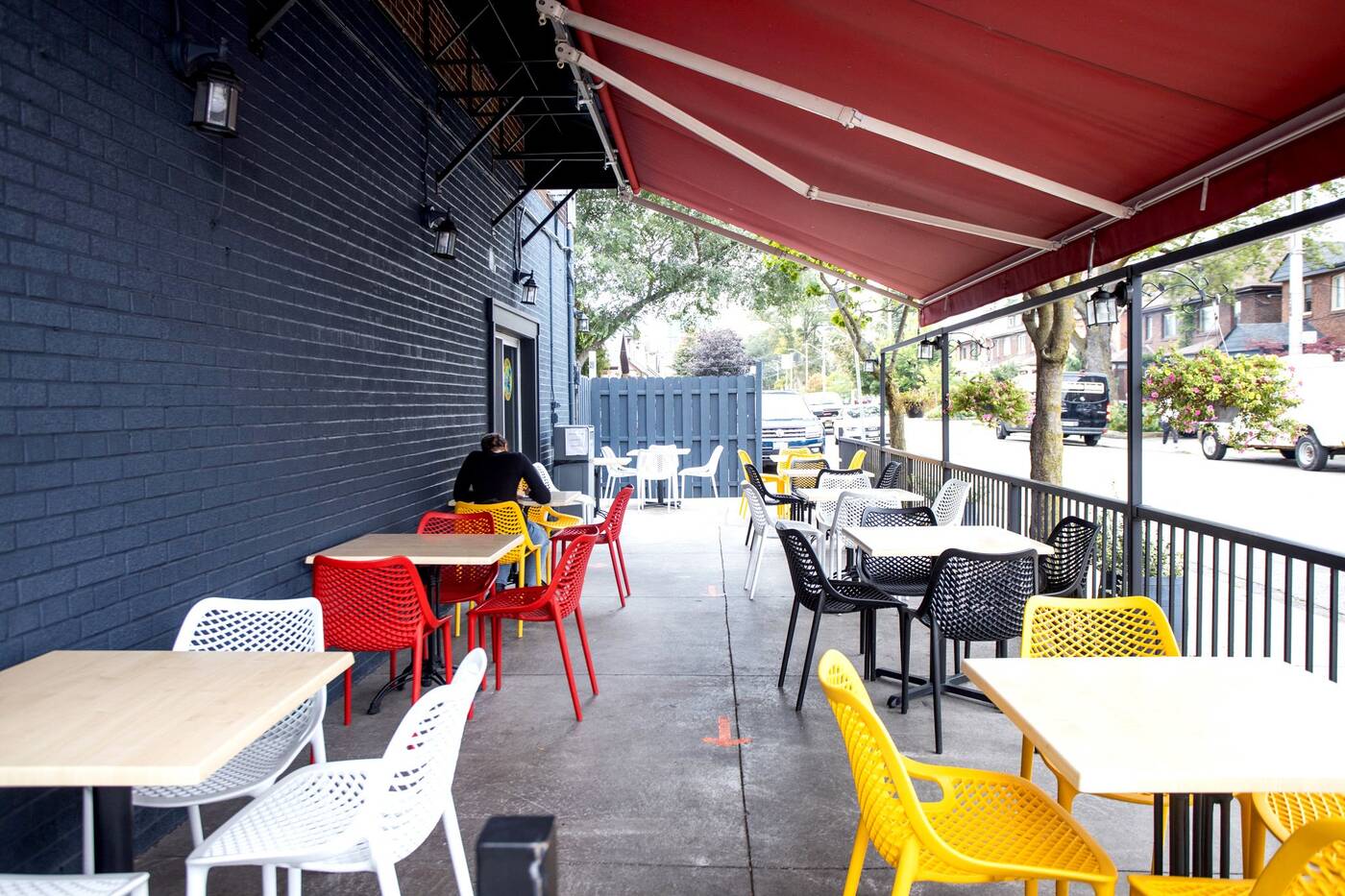 Although, takeout is a more popular option, with most people stopping by on their lunch breaks from work. Being that it's also open till 11 p.m., I could see Bullseye as a good go-to spot to fix those late night burger cravings.

At Bullseye, there are two types of beef burgers you can get:

The classics are pretty standard, a meat patty with or without cheese and your choice of regular toppings like lettuce, tomato and pickles.

But, the signature burgers is where the fun is at, coming in eight different varieties, each one has its own unique theme of toppings. 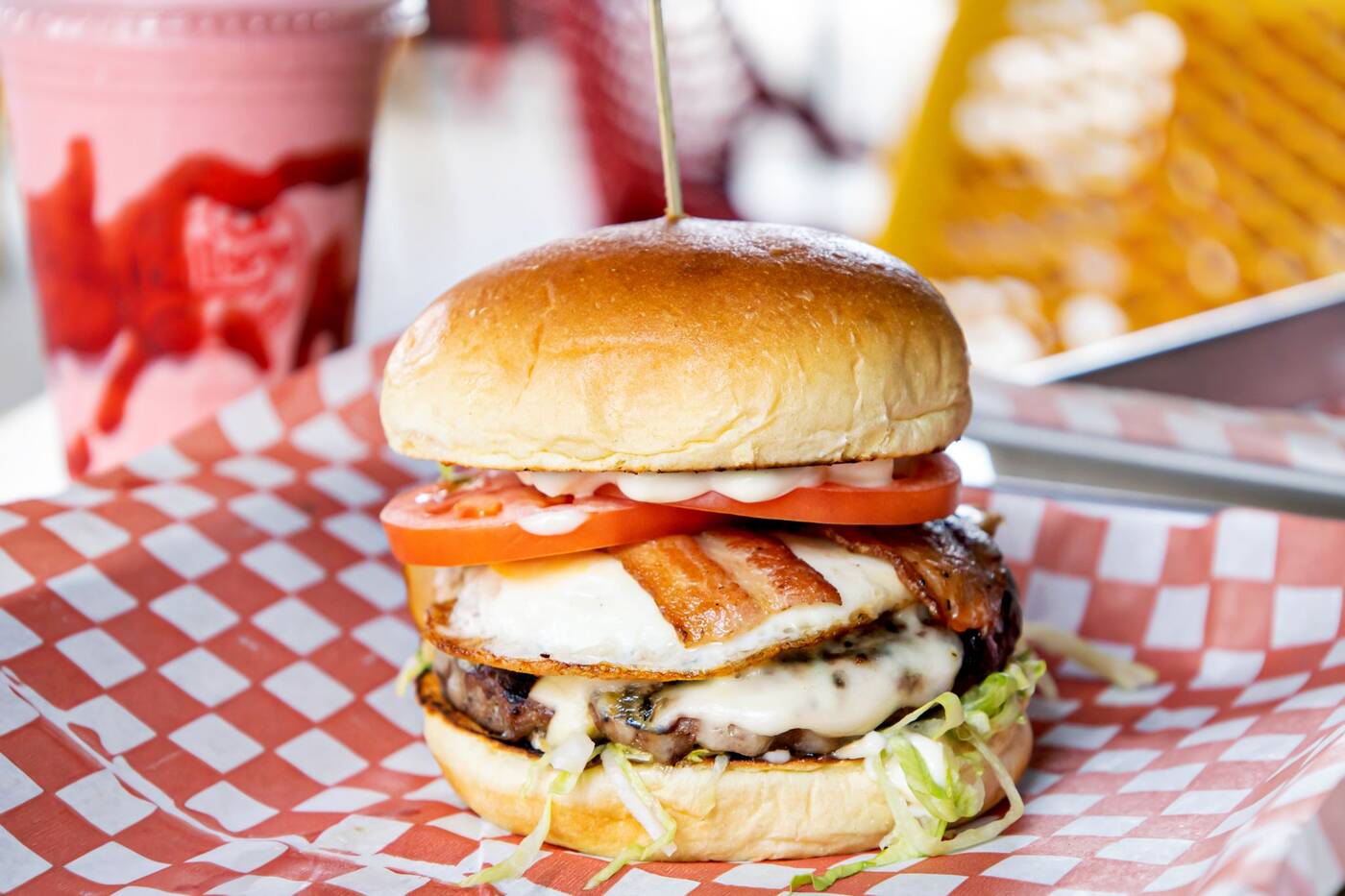 The Bacon & Egg signature ($9.99) mixes two meals of the day, breakfast and lunch into one burger.

A six ounce beef patty is grilled for two and half minutes each side, before being topped with a fried egg and two slices of bacon. Swiss cheese, iceberg lettuce, tomato and mayonnaise are the perfect finishing touches to this juicy combination.

Along with their regular hamburgers, Bullseye's menu also has two versions of a cheesesteak sandwich and three different types of chicken sandwiches. 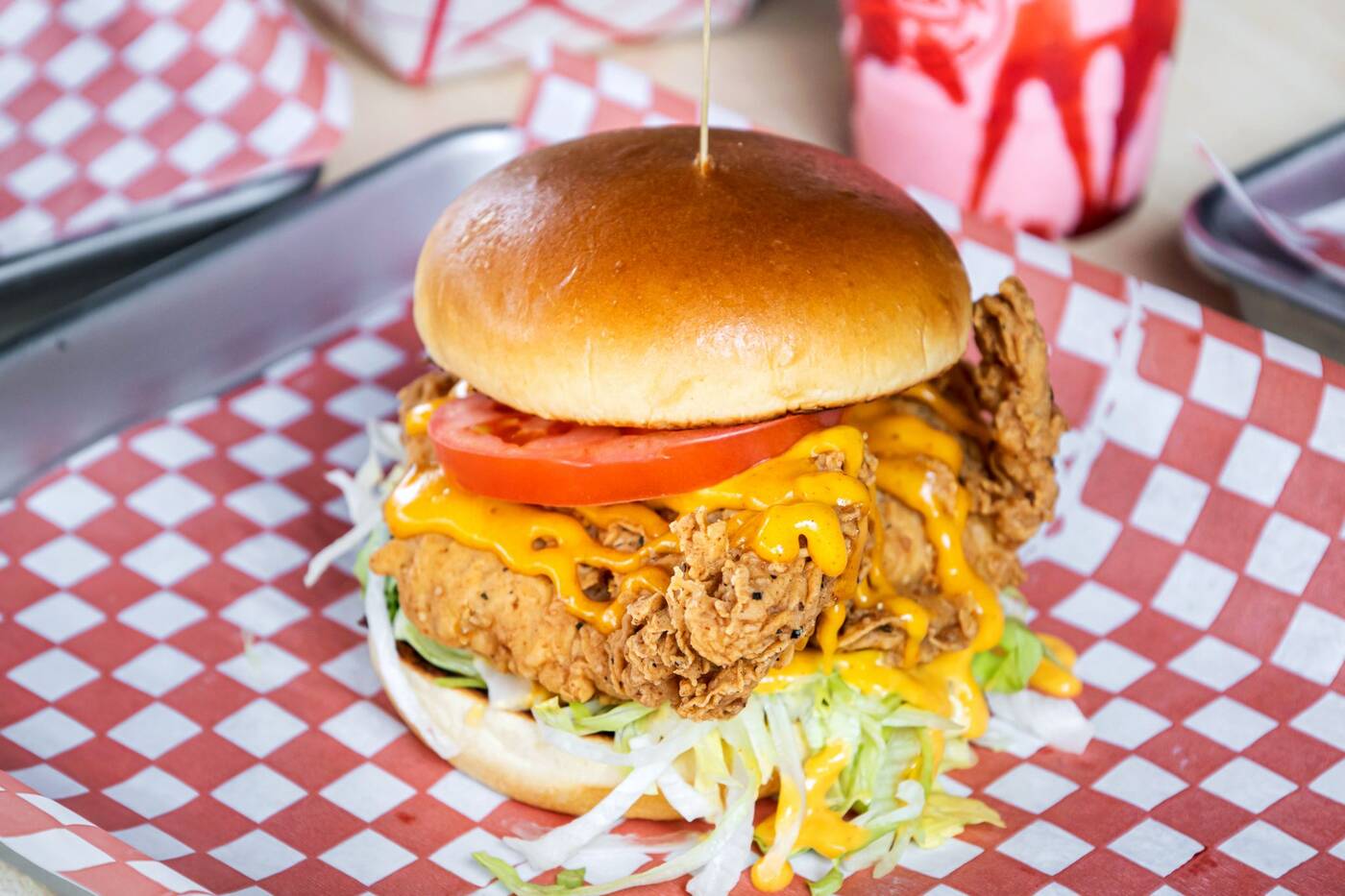 The Honey Mustard Chicken Sandwich ($9.99) has a chicken breast that's triple-coated in buttermilk and flour, then deep-fried for eight minutes. If you want a healthier option, you can get the chicken grilled ($8.99), instead.

The garnishes are simple on this one - just iceberg lettuce and tomato, which gives your tastebuds the chance to focus on the thick drizzle of honey mustard sauce. 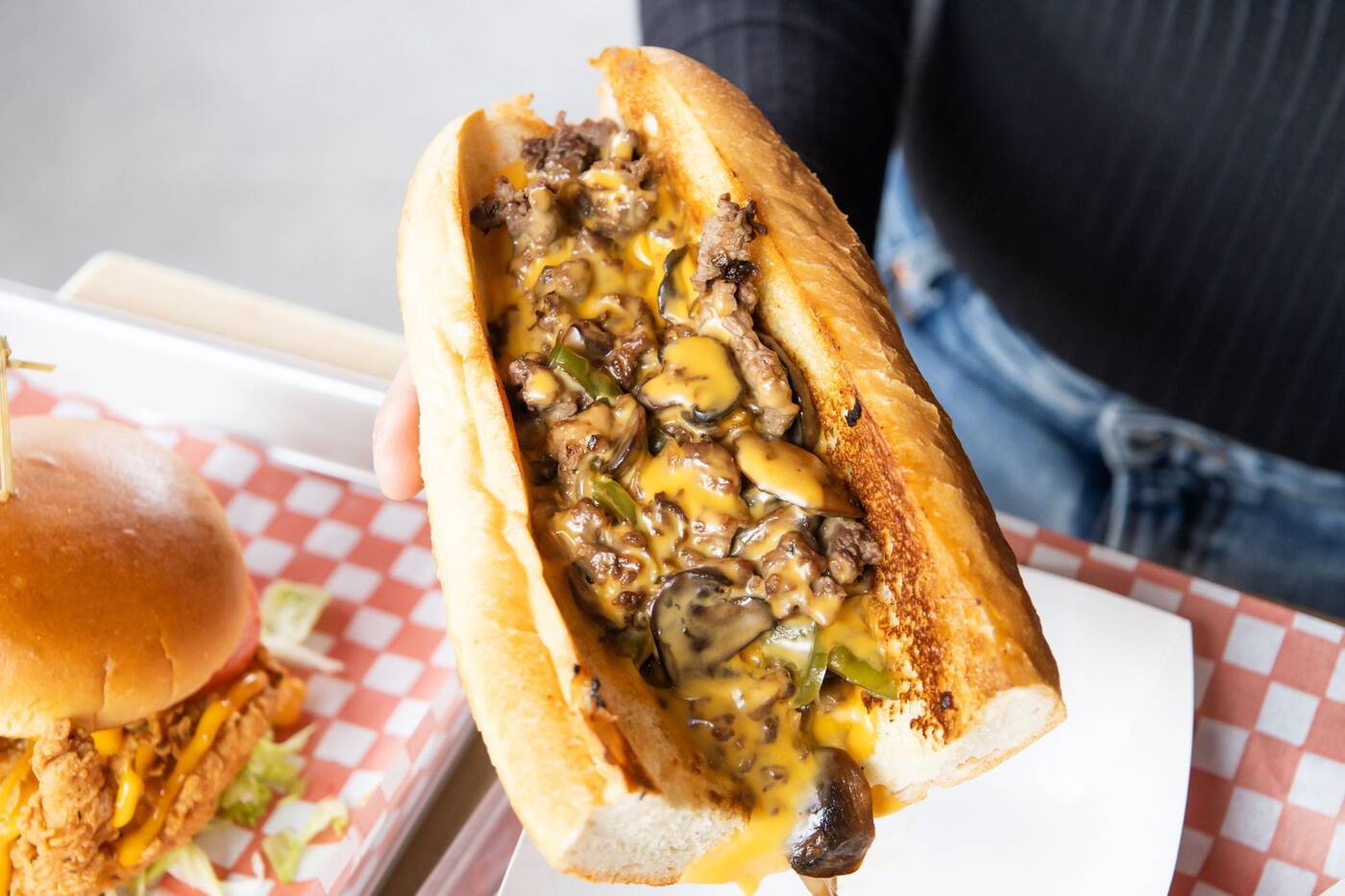 The Bull ($11.49) is the restaurant's house version of a cheesesteak sandwich.

Six ounces of steak is cut-up and put on the grill to be sauteed with green peppers, mushrooms and onion. A rich mixture of American cheese and milk creates the cheese sauce, its then poured generously on top of a warm bun filled with the grilled meat. 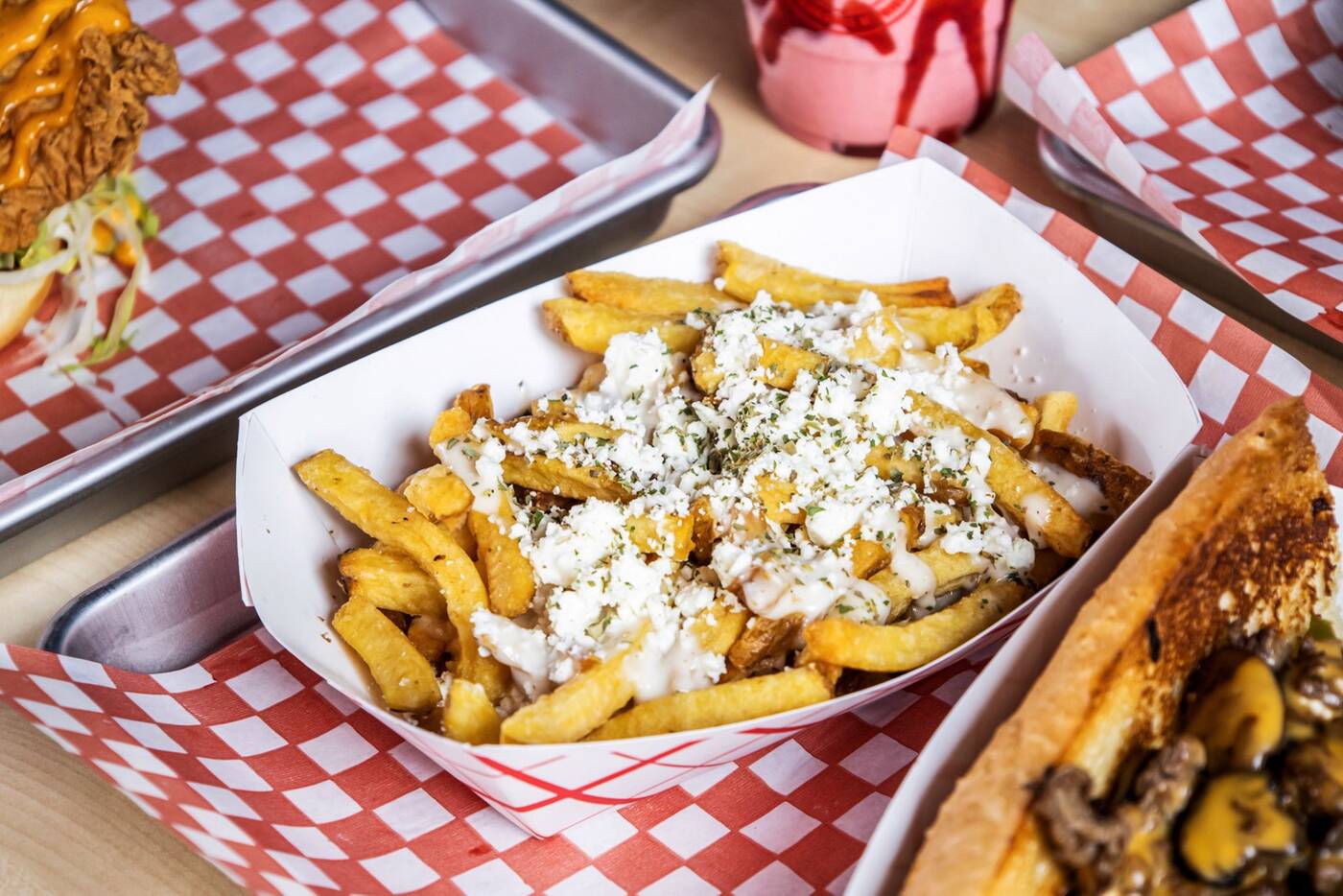 Bullseye is the type of burger place where you can look forward to their sides. They offer more than just standard potato fries to go with your burger, ranging from onion rings to breaded pickles.

The Greek Fries ($5.99) is a side that will make you want to return to Bullseye again. It's probably because the feta cheese used on it is imported straight from Greece.

A base of potato fries is coated with a savory tzatziki sauce, along with a light sprinkling oregano and of course, the feta cheese. 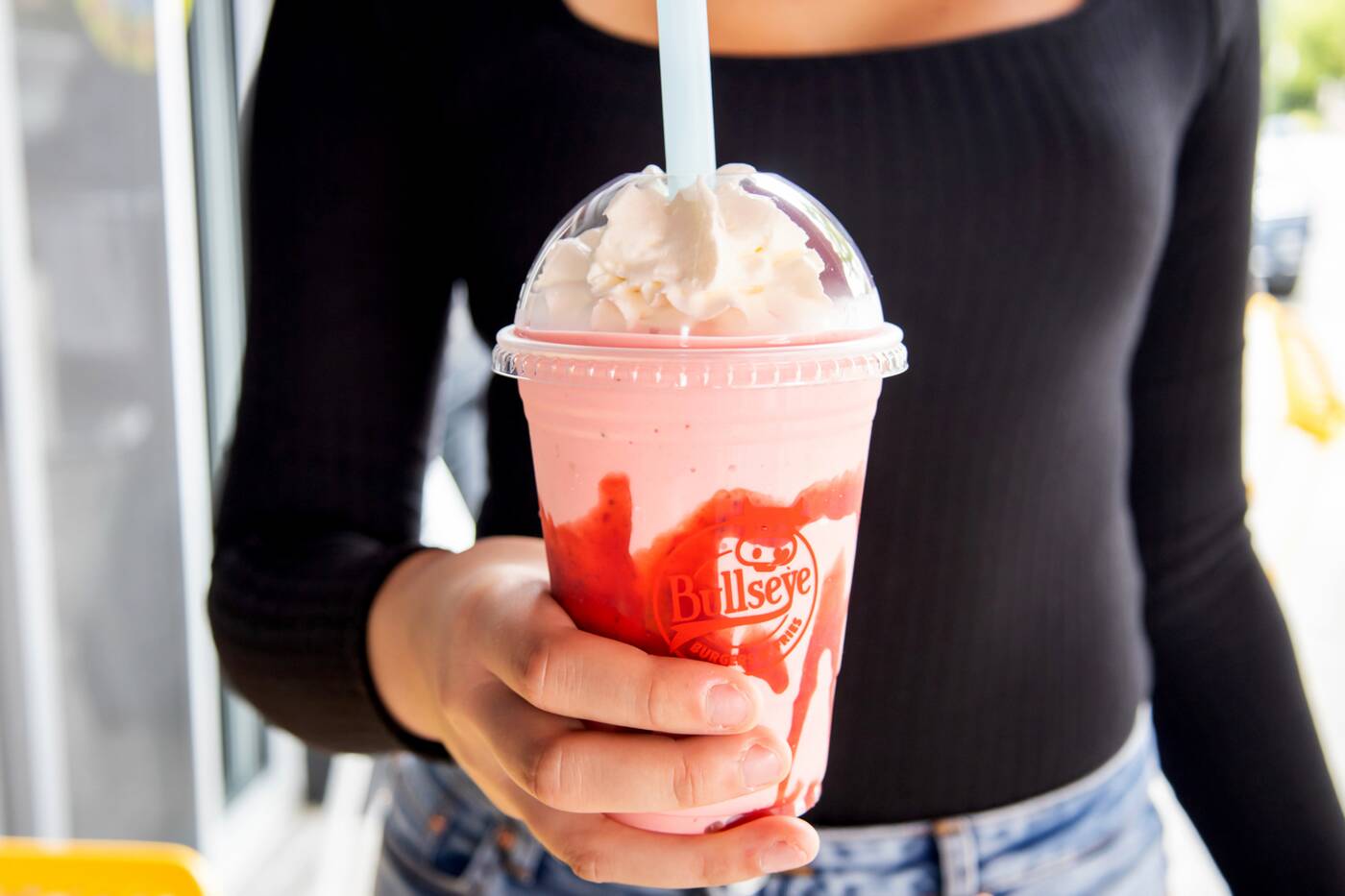 There's a little bit of everything at Bullseye, including milkshakes and desserts, like the Bubble Waffle Cone ($7.49) made with ice cream they get from St. Clair Ice Cream, which has been a supplier in Toronto for almost a century. 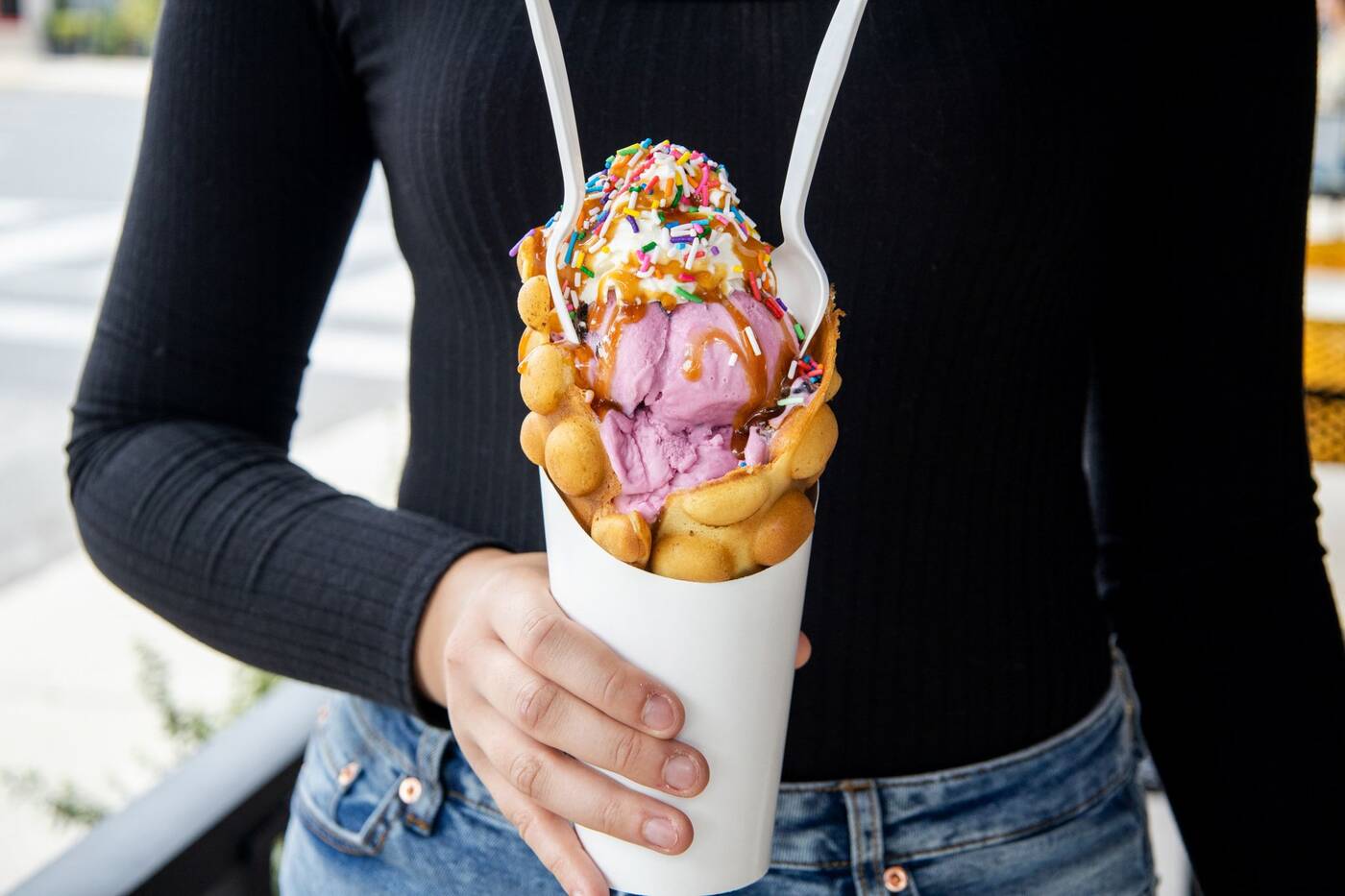 The bubble waffle maker is what creates the circular pattern on the waffle itself. Once done cooking, the waffle is carefully molded into a cup. You can then choose any ice cream flavour to put inside, one scoop ($7.49) or two (9.49).

Two dollops of whip cream is sprayed on top and either chocolate or caramel sauces can be added, with a touch of sprinkles to finish it off. 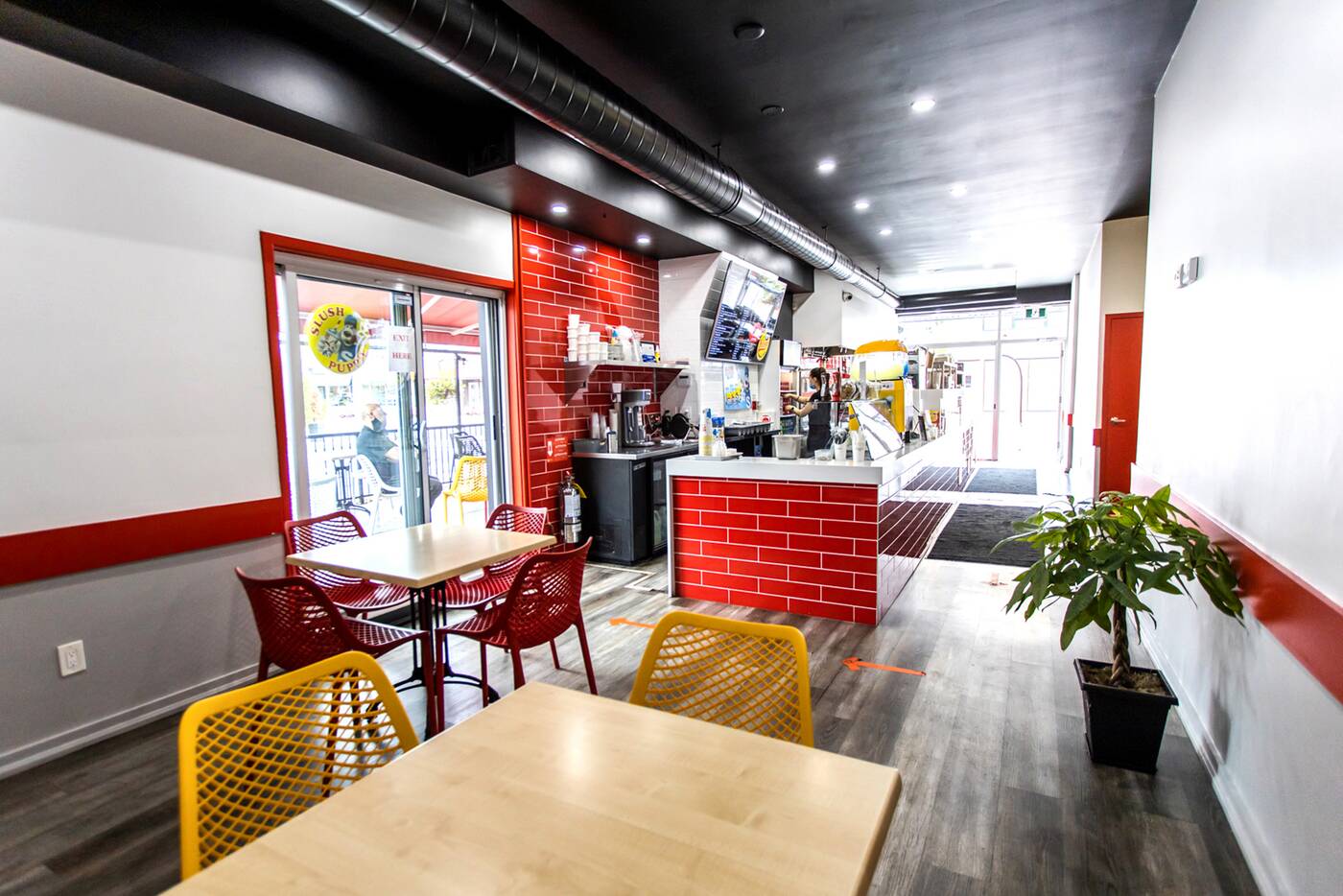 You can spot the exterior of Bullseye from a couple blocks down the street, a giant sign with an arrow reading"burgers" runs vertical down the building, making it hard to resist your hungry thoughts. 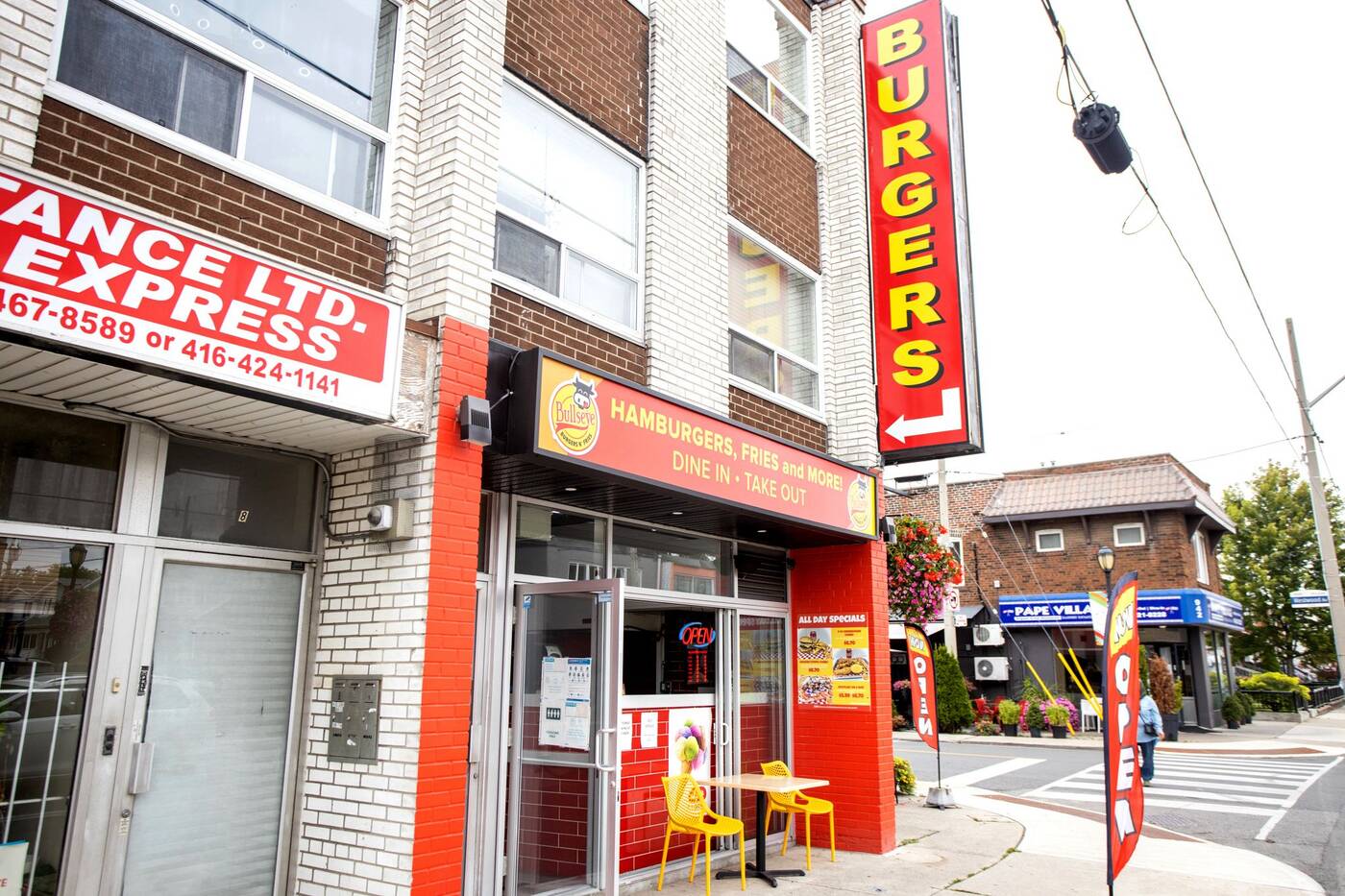