That's exactly what you'll find at this project from Paul Kim, who previously ran Doma in this space. 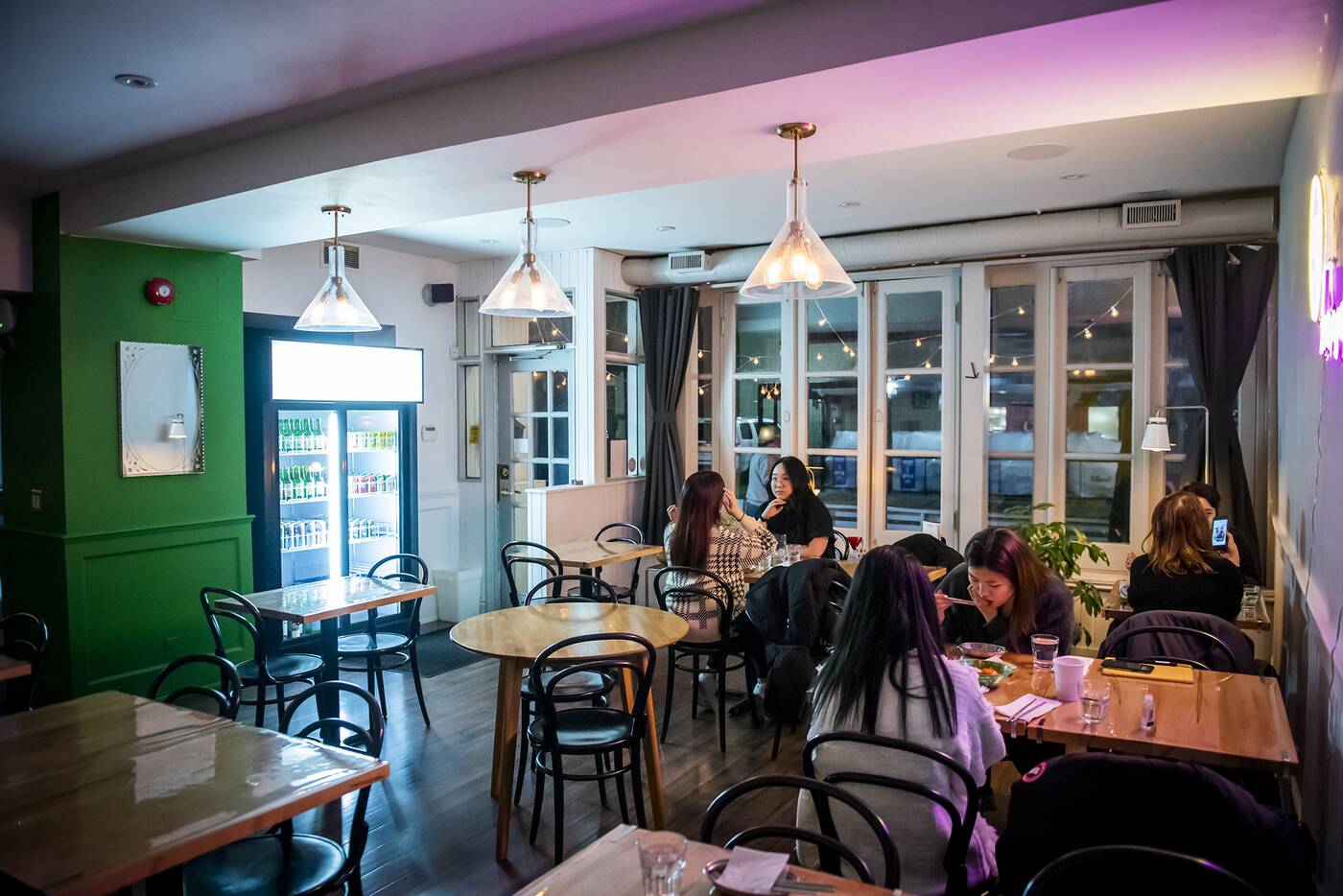 The feel of the space is still minimal, but a little more casual with fun neon accents. Order by circling and checking off options on a dim-sum-style paper menu. 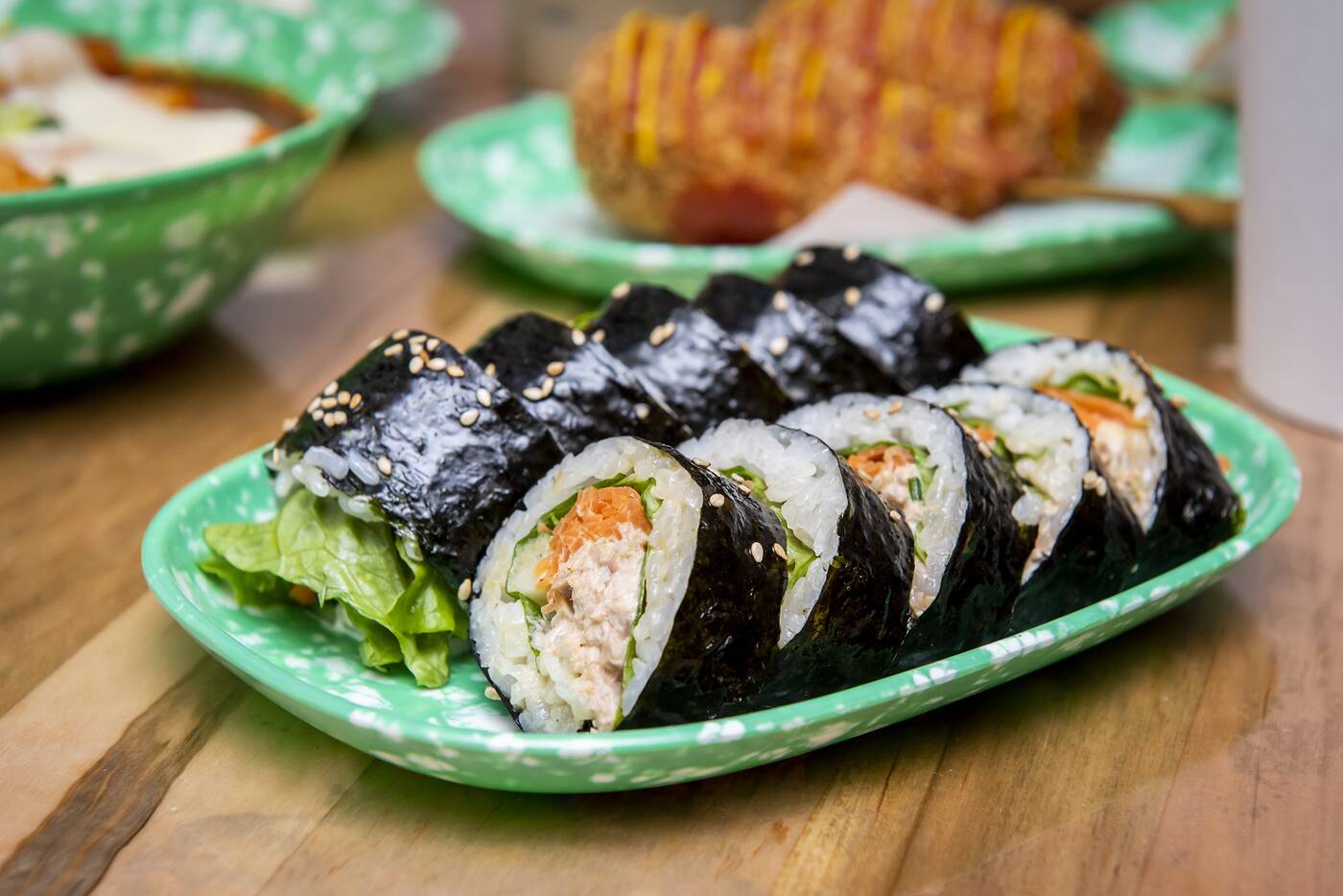 Spicy tuna kimbap ($8), as Korean food lovers will know, is stuffed with flaky tuna and veggies, rather than stuffed with raw tuna and drizzled with spicy sauce like Japanese spicy tuna rolls.

Wrapped in seaweed, it's a light snack suitable for eating with chopsticks or hands, though again if you're more familiar with Japanese tuna maki rolls you'll notice there's an absence of any kind of dipping sauce. 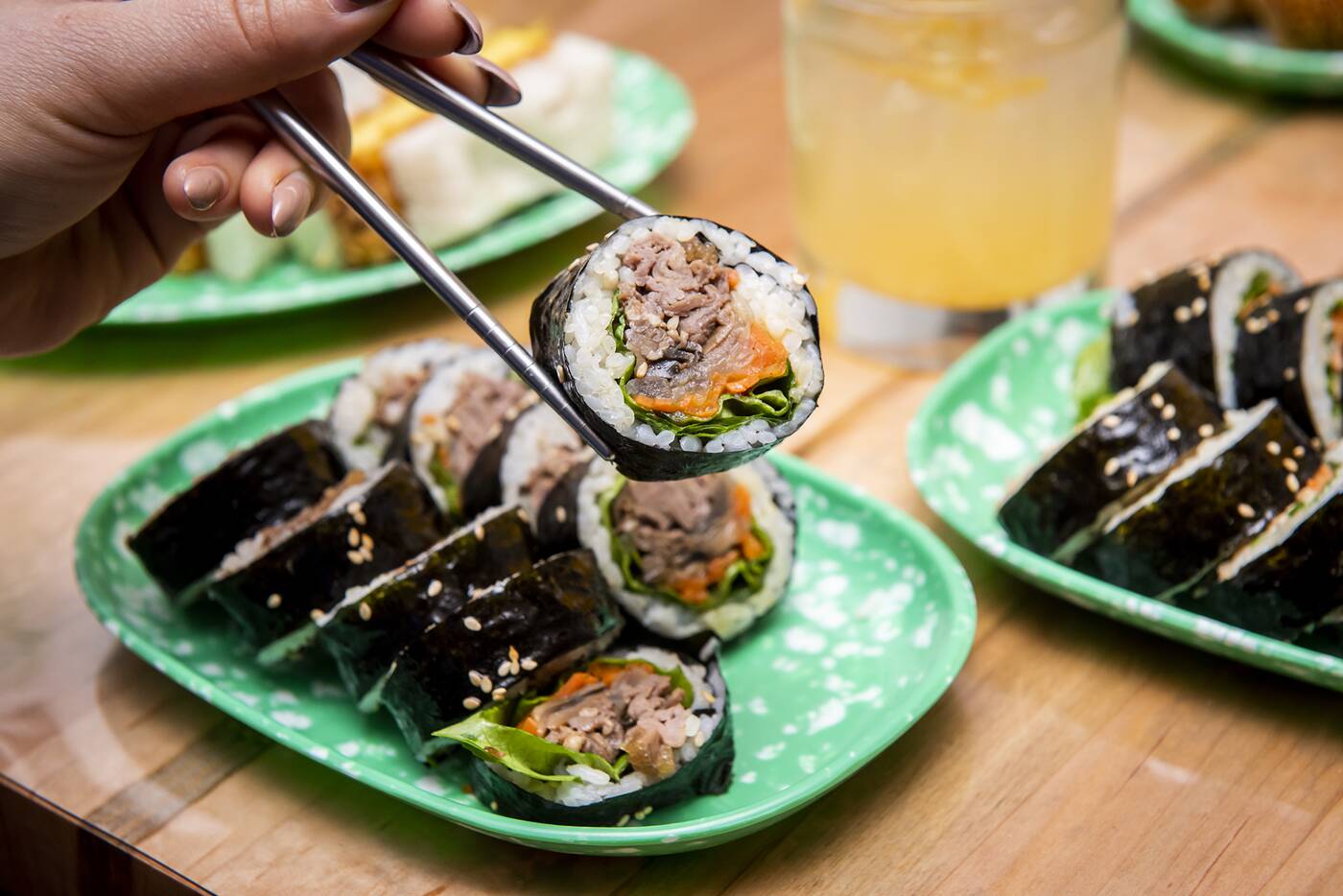 Bulgogi kimbap goes for the same price, but gets stuffed with hearty meat instead of fish. 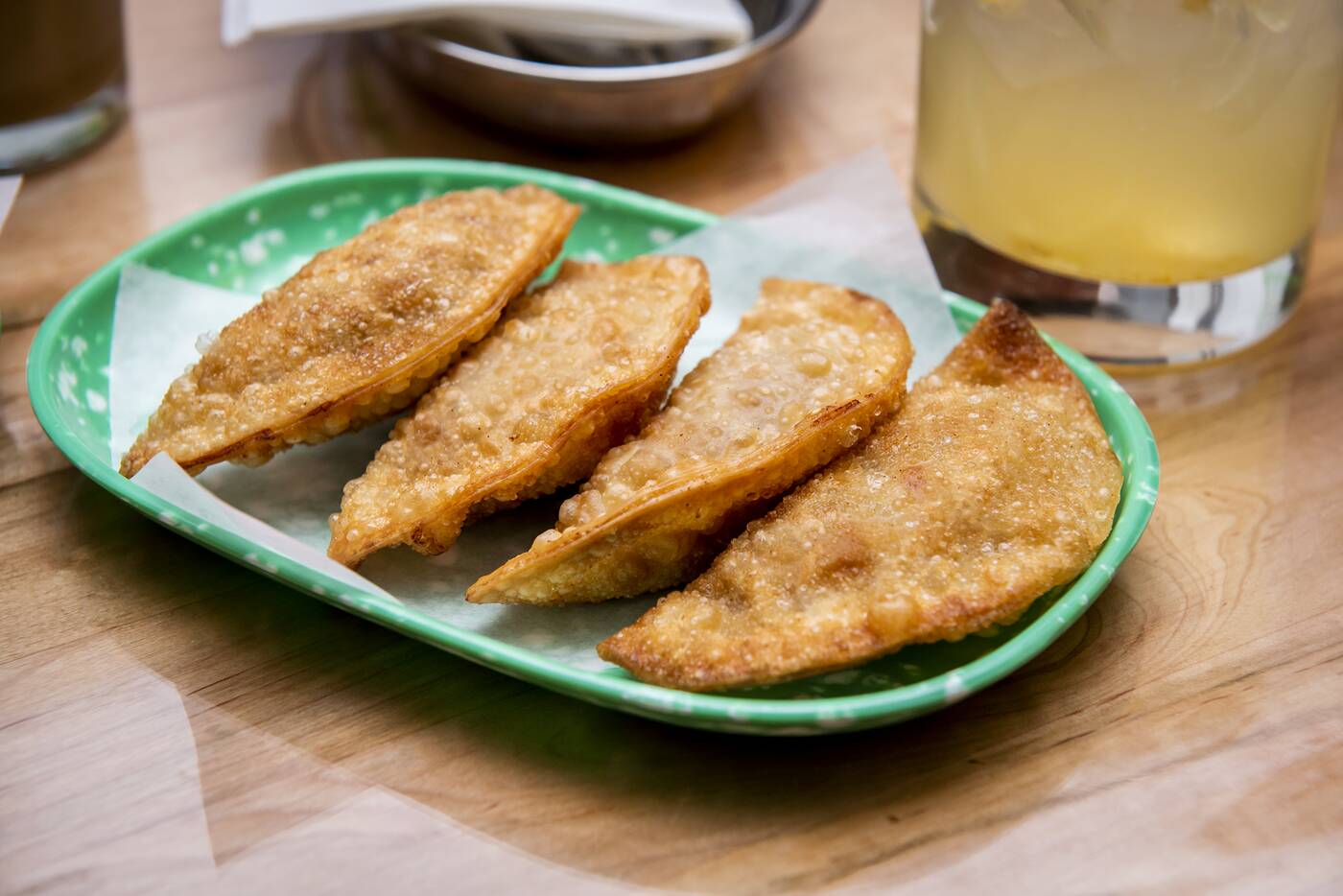 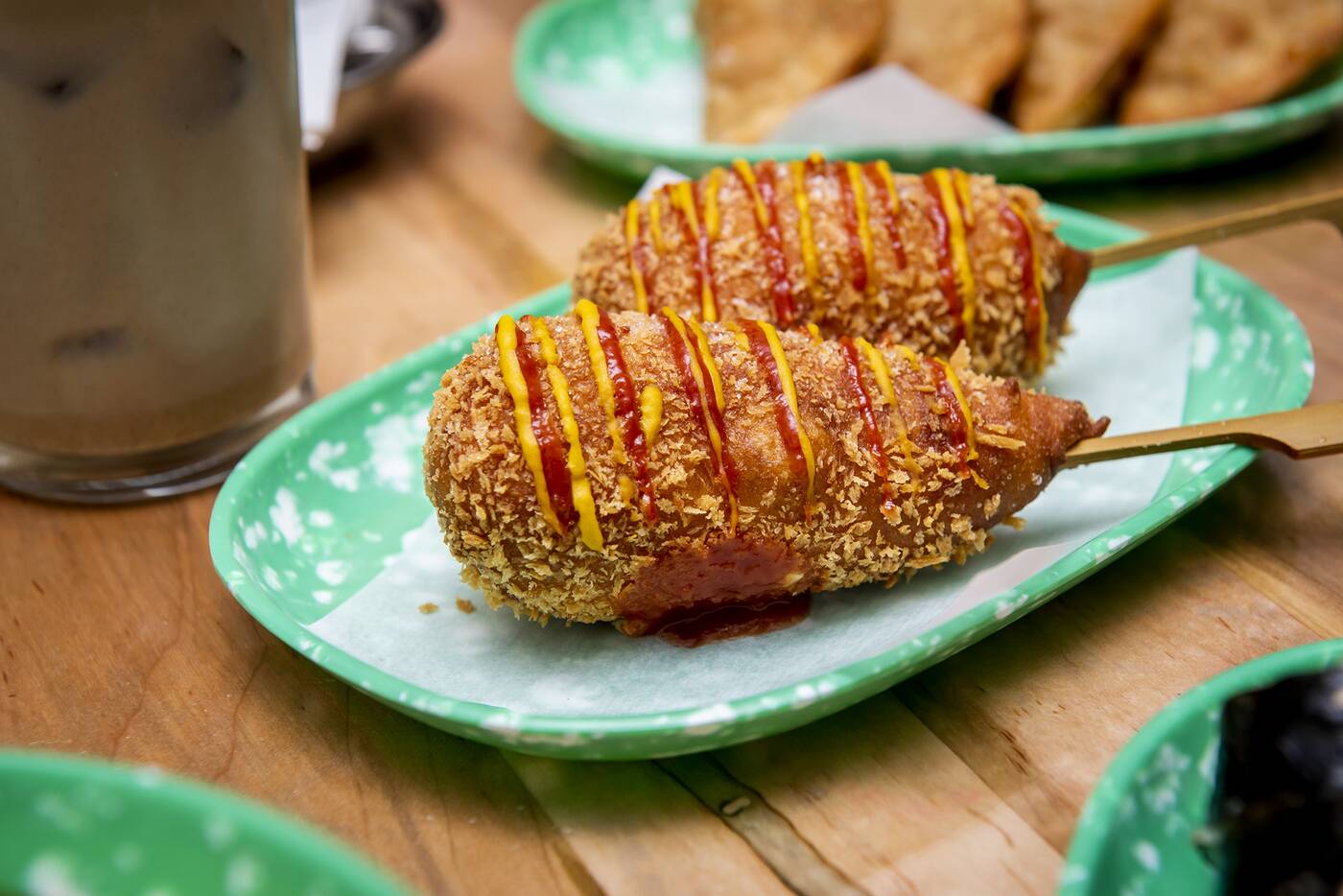 A mini korndog goes for $3, the lowest price point on the menu. Sausage and melty cheese are breaded and coated with sugar so the crunchy exterior has a little sweetness to it. 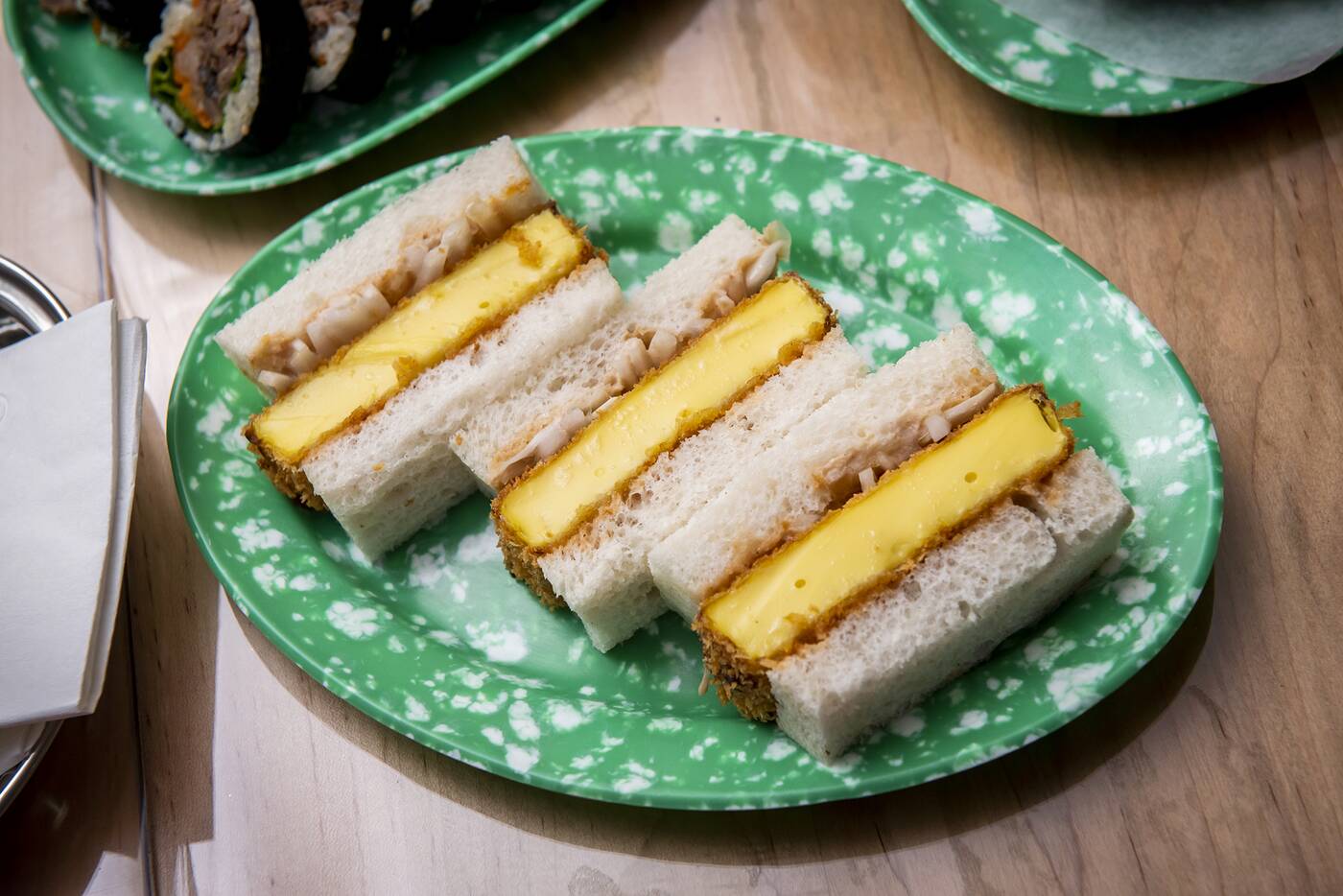 An egg sandwich ($8) is an invention of Boonsik and apparently one of their most popular items. 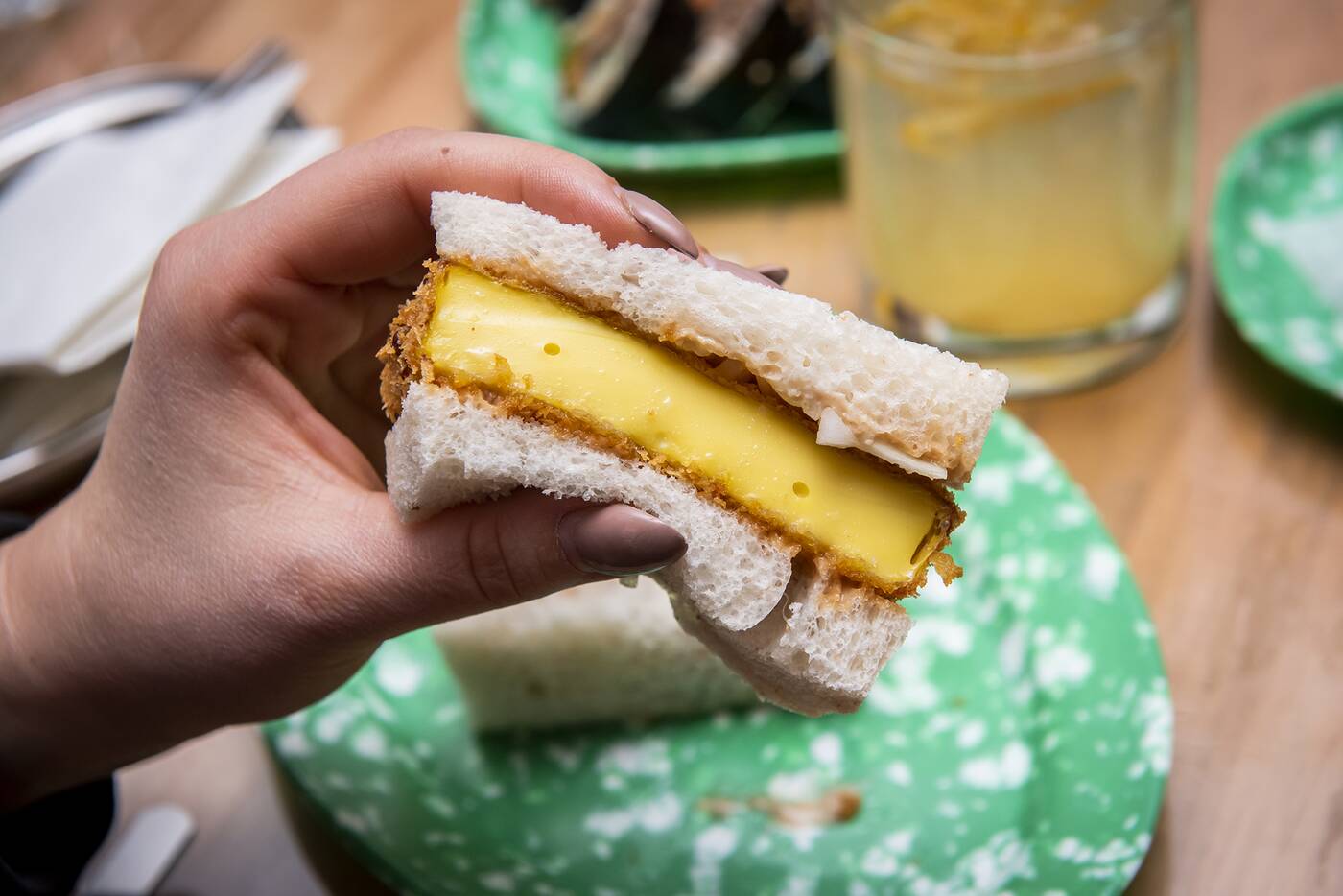 Custardy cooked egg is breaded with panko and deep-fried, then sandwiched between white bread with the crusts cut off along with raw onions. The result is quite rich, more of a combination of textures than flavours. 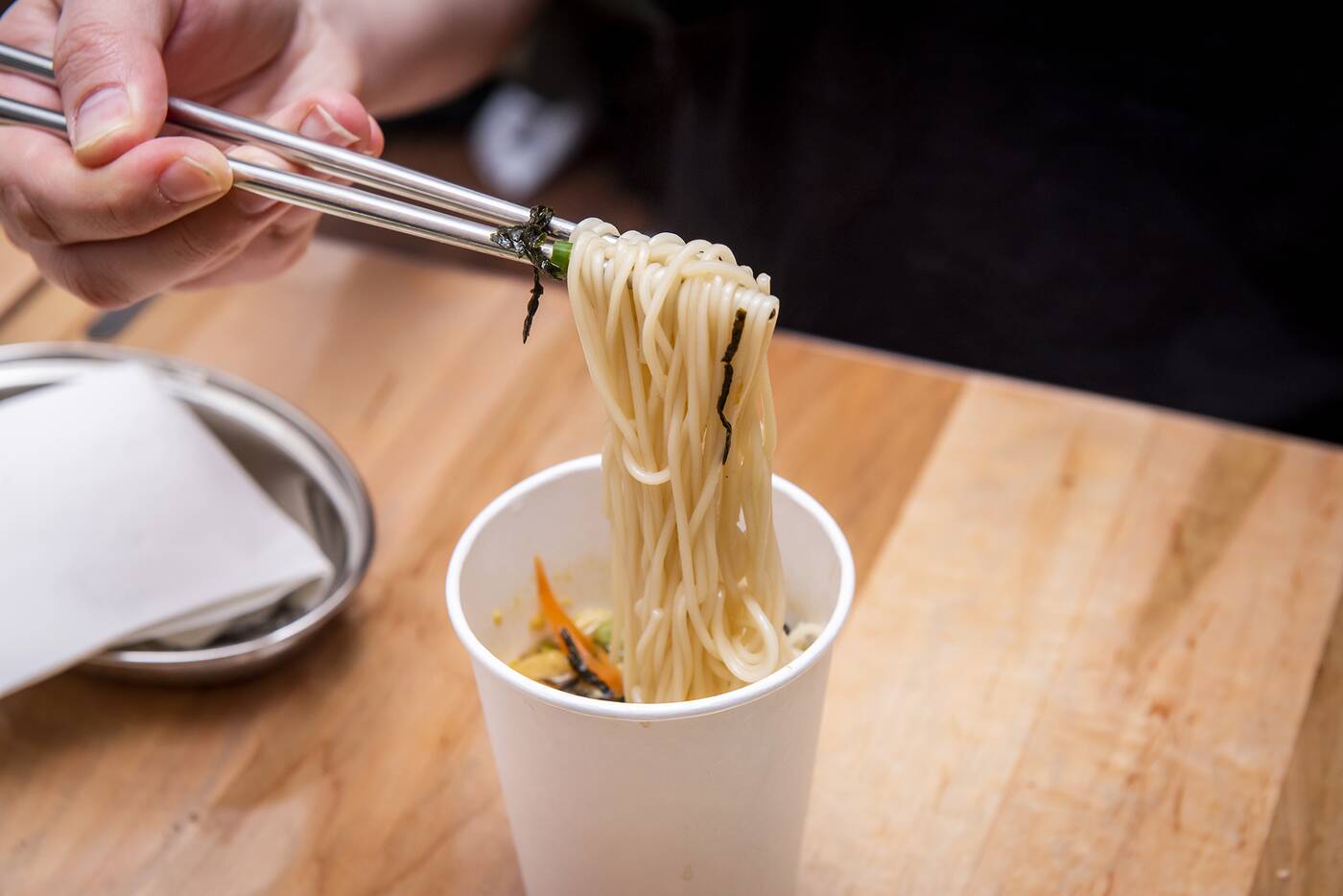 Janchi cup noodle soup ($4) is literally served in a paper cup, colliding the ideas of cup noodles and janchi-guksu, a celebratory wheat noodle dish. Seaweed and veggies swim in the salty house kombu broth along with the light-tasting noodles. 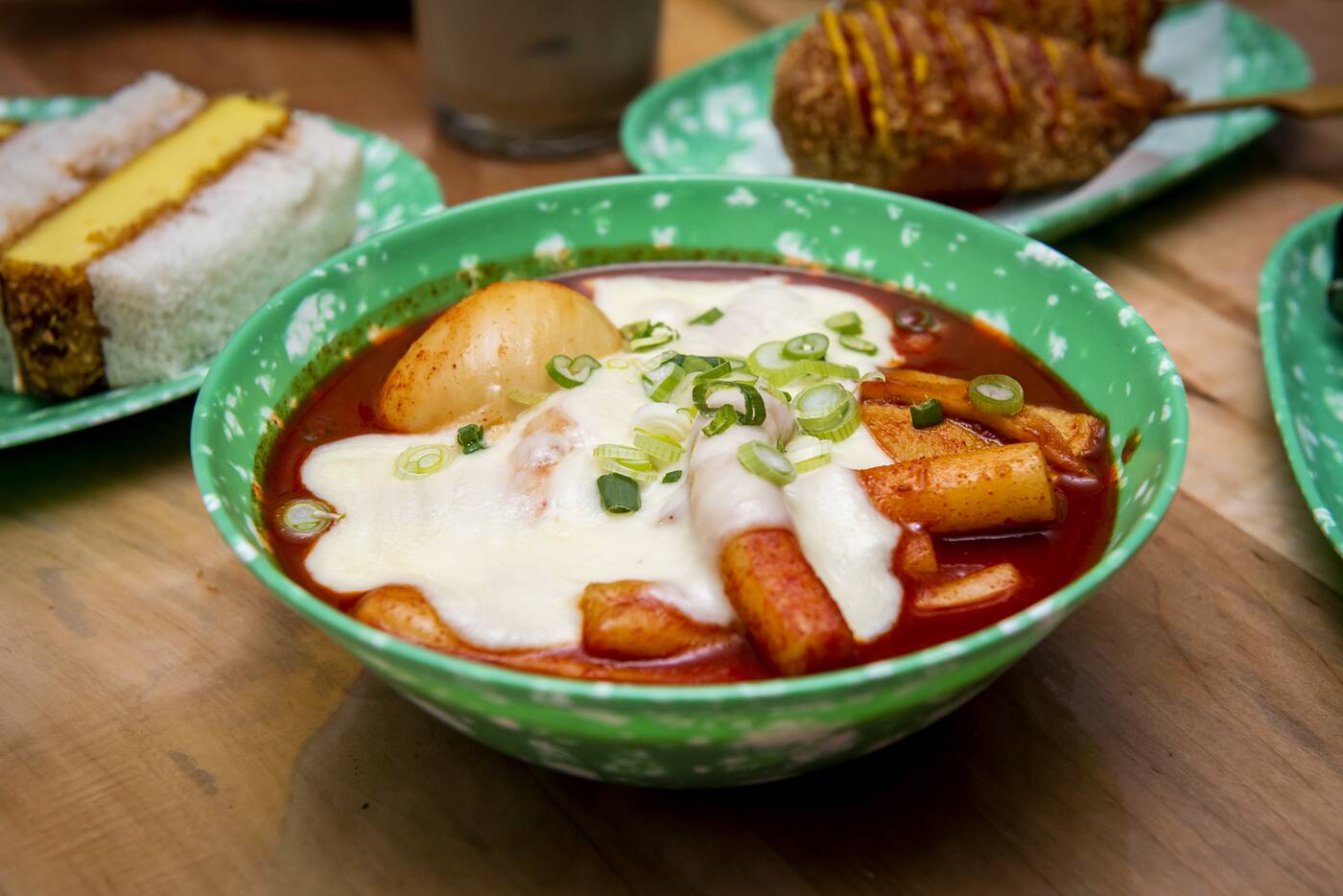 Tteokbokki ($10 for a small order, $18 for a large) can be ordered mild or hot, and you can also choose to add mozzarella for a molten, stretchy topping for a $3 upcharge. 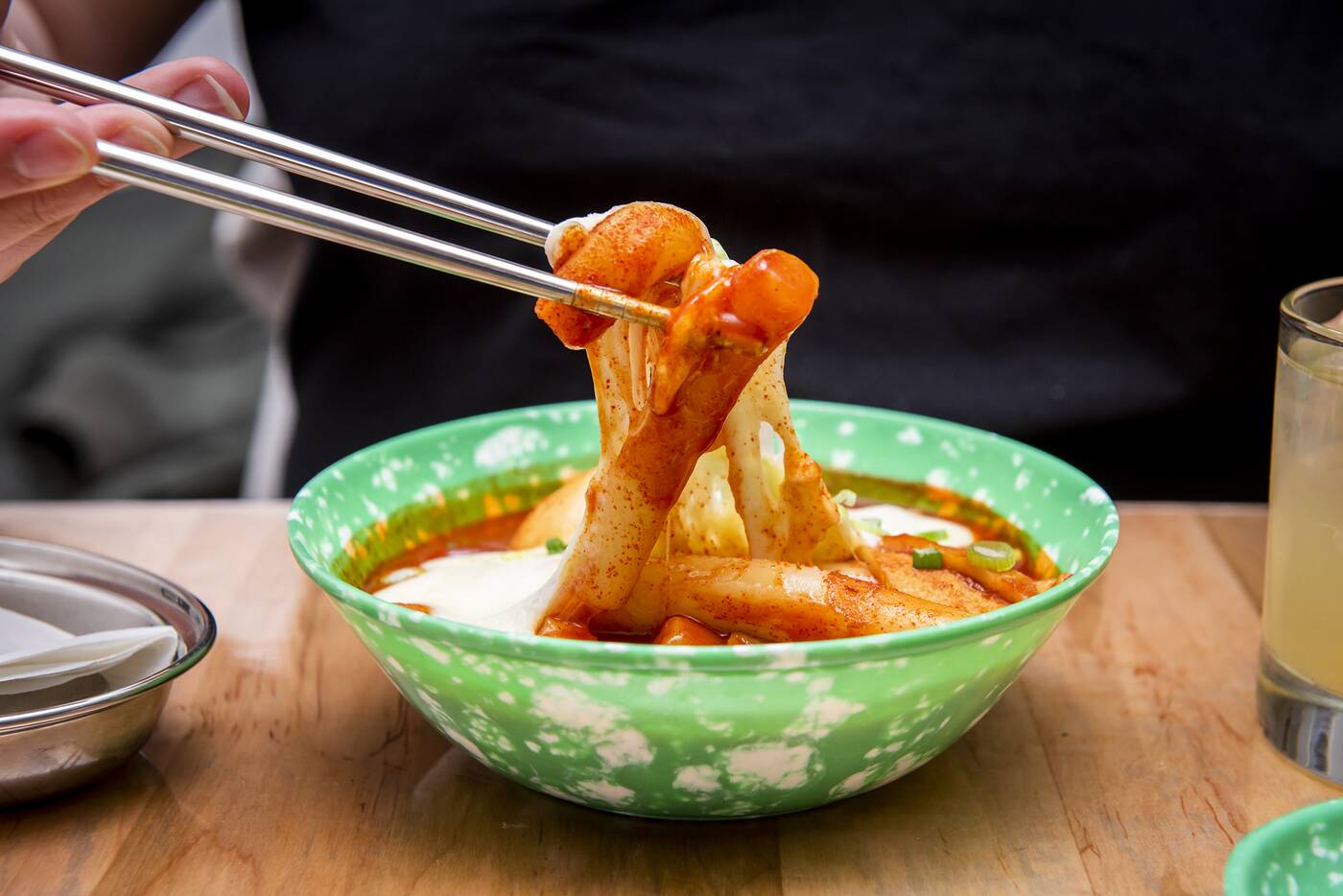 Go mild when it comes to this rice cake dish if you're unsure of the spice level you're comfortable with, as even the mild version is quite spicy and the hot version is apparently lethal. 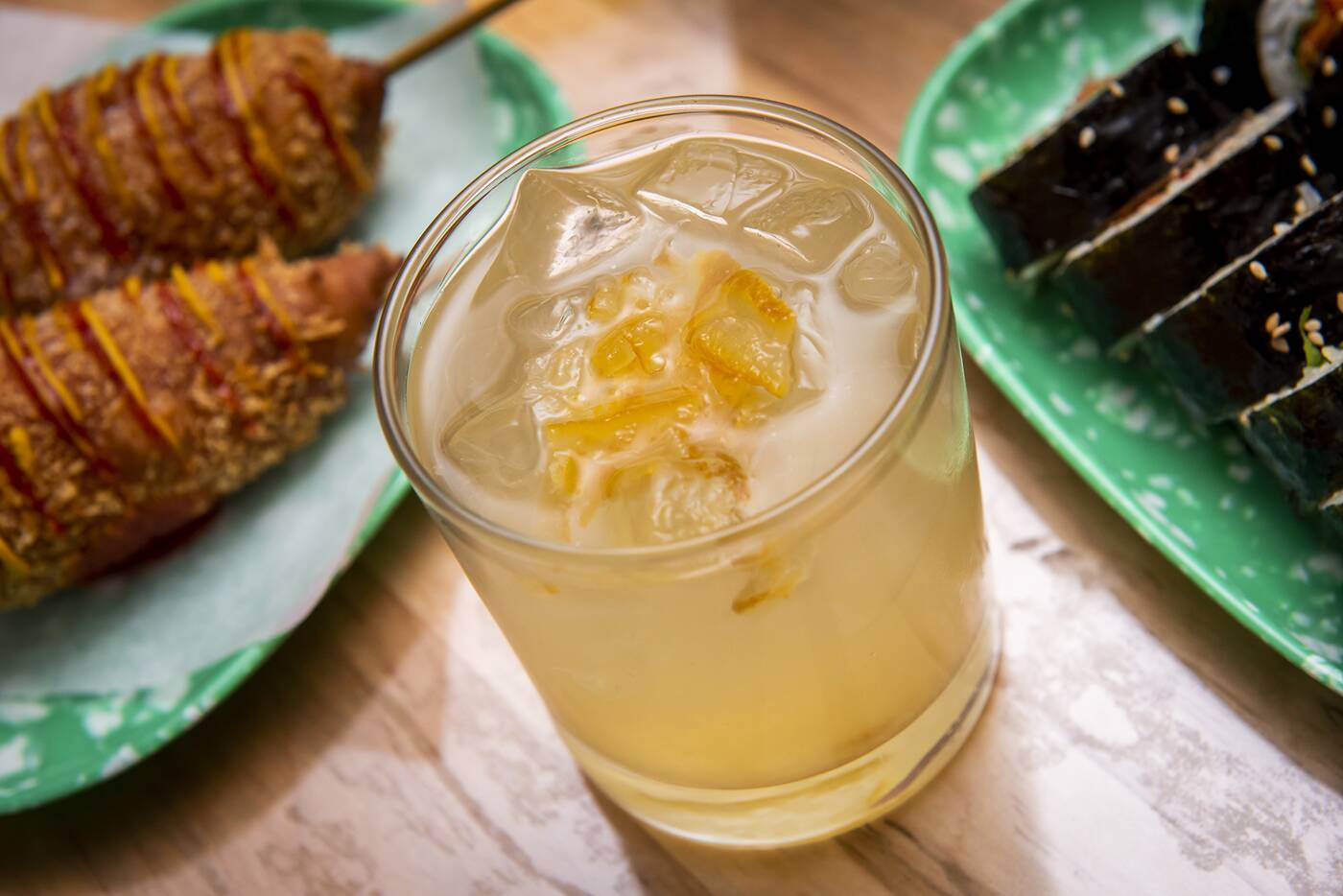 Yuja tea ($3) is a citrus-y, tart non-alcoholic beverage made with house syrup, which can be ordered hot or iced. The iced version definitely refreshes paired with some spicier dishes. 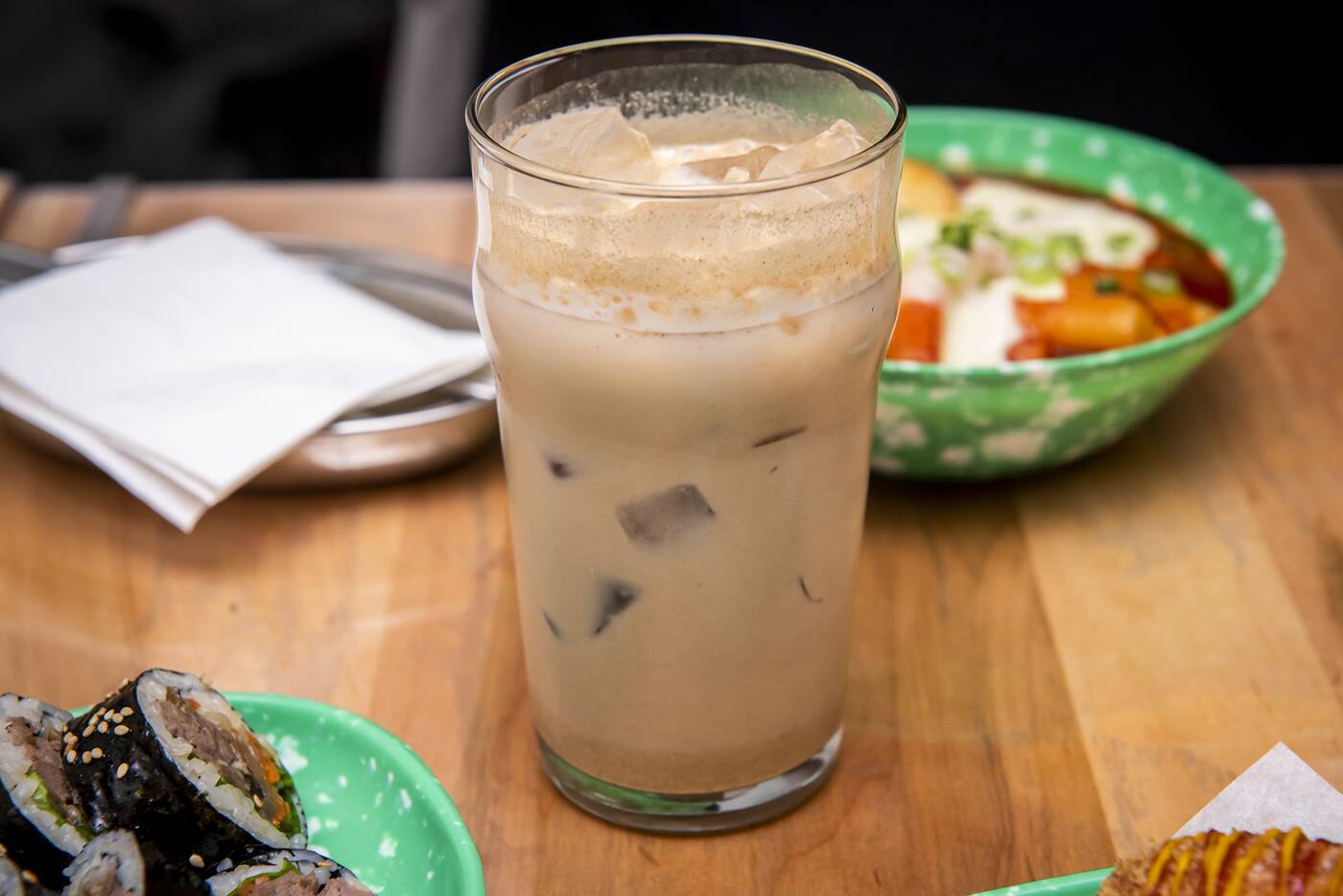 Misootgaru ($4) can also be ordered hot or cold, described to me as a multigrain latte. Misu-garu is a traditional Korean grain powder, here mixed with milk and syrup to create a take on the traditional drink that tastes earthy and starchy. 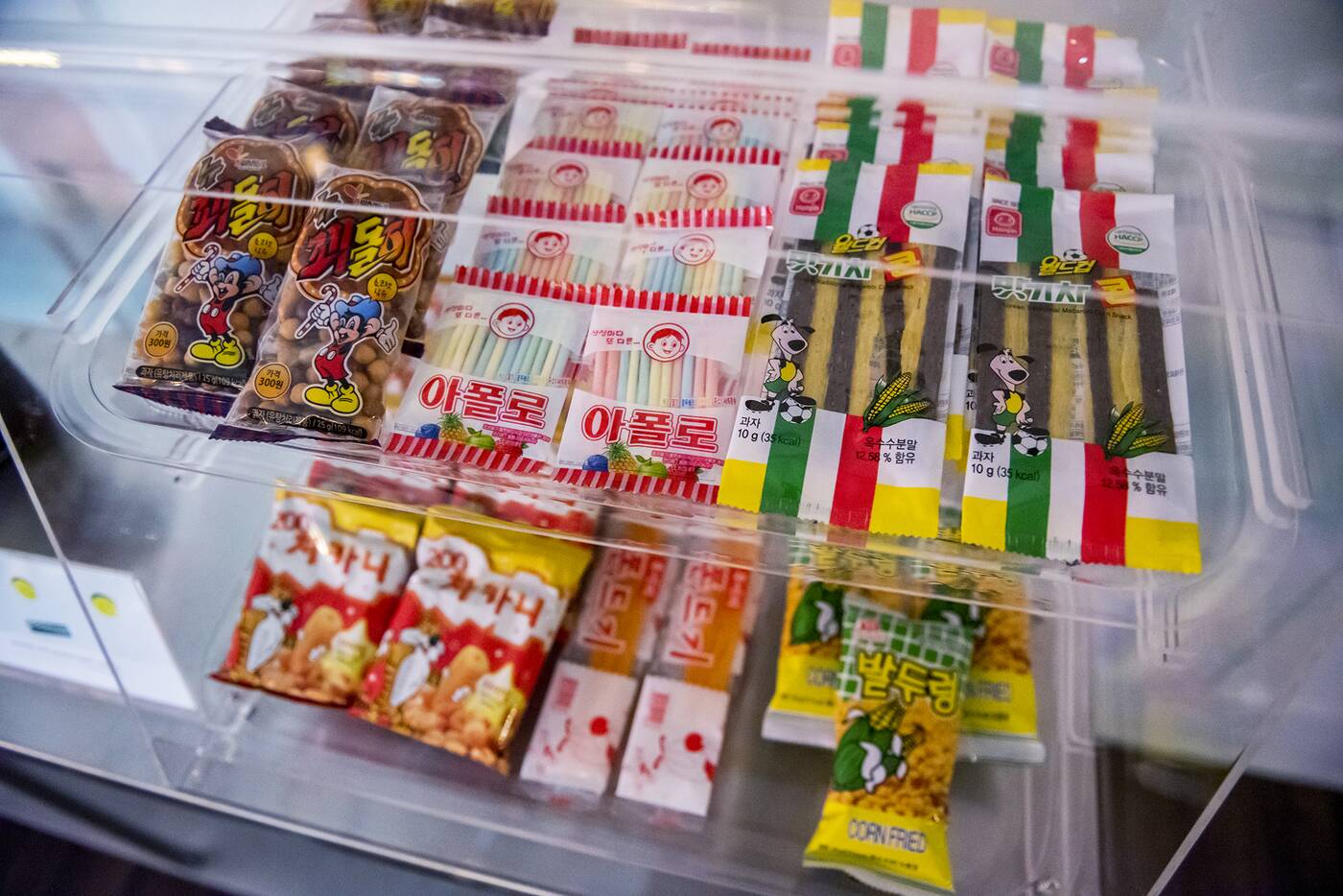 A cute little case in the corner is stocked with old school Korean snacks. 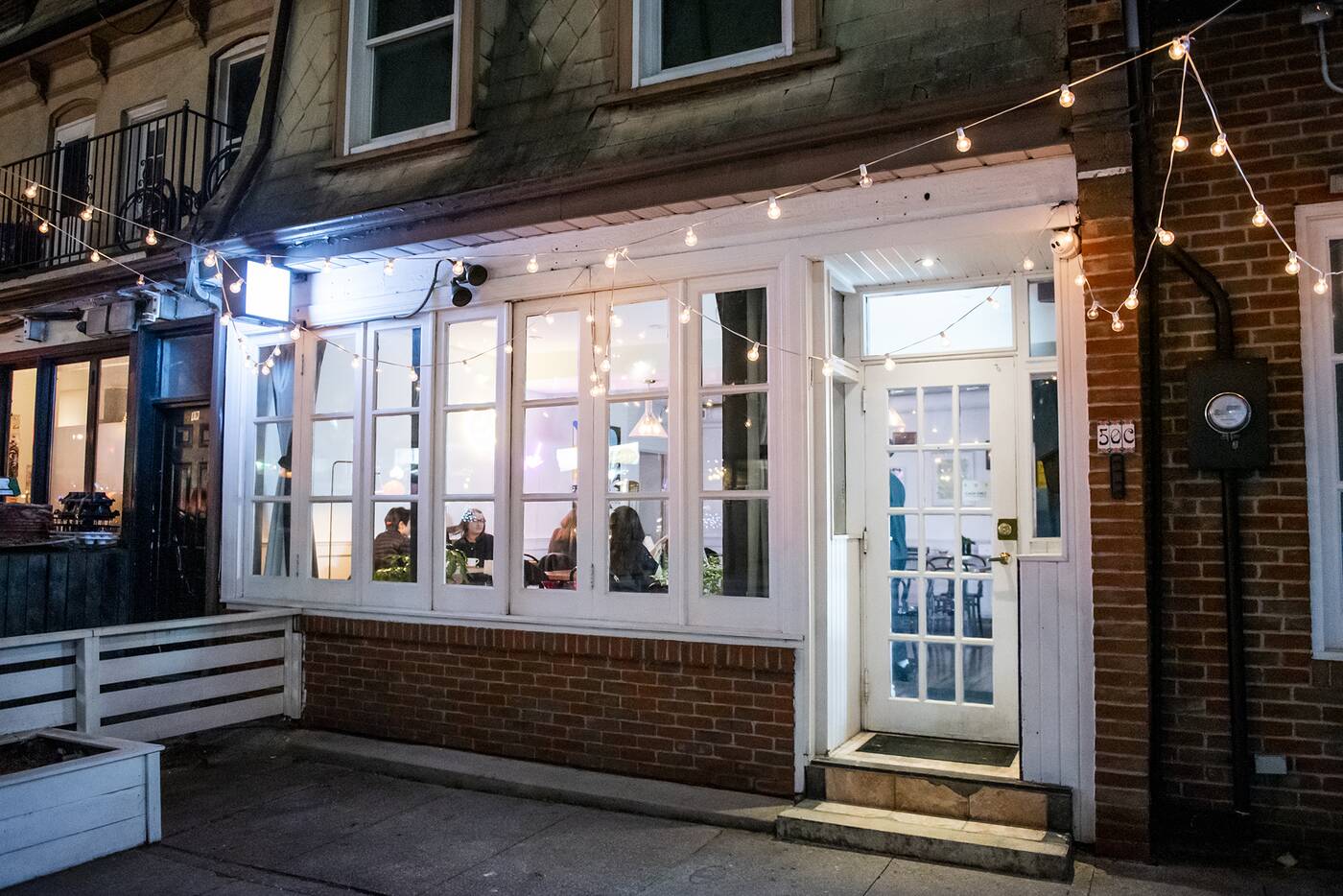