Blackburn Social House has hand sanitizer available at the bar and front of the restaurant. When you scan a QR code for the menu, a COVID screening page appears that you have to fill out before you can order any food.

Blackburn Social House is an elevated gastropub, with a focus on French and Italian cuisine, in addition to an elaborate cocktail program.

The two-in-one party hub was born through four friends, all in their 20's, who collaborated backgrounds in cooking, service, finance and business to build what Blackburn is today.

Co-owners Collin Wong and Armin Eftekhari named the restaurant after the street they lived on together while attending the University of Ottawa. 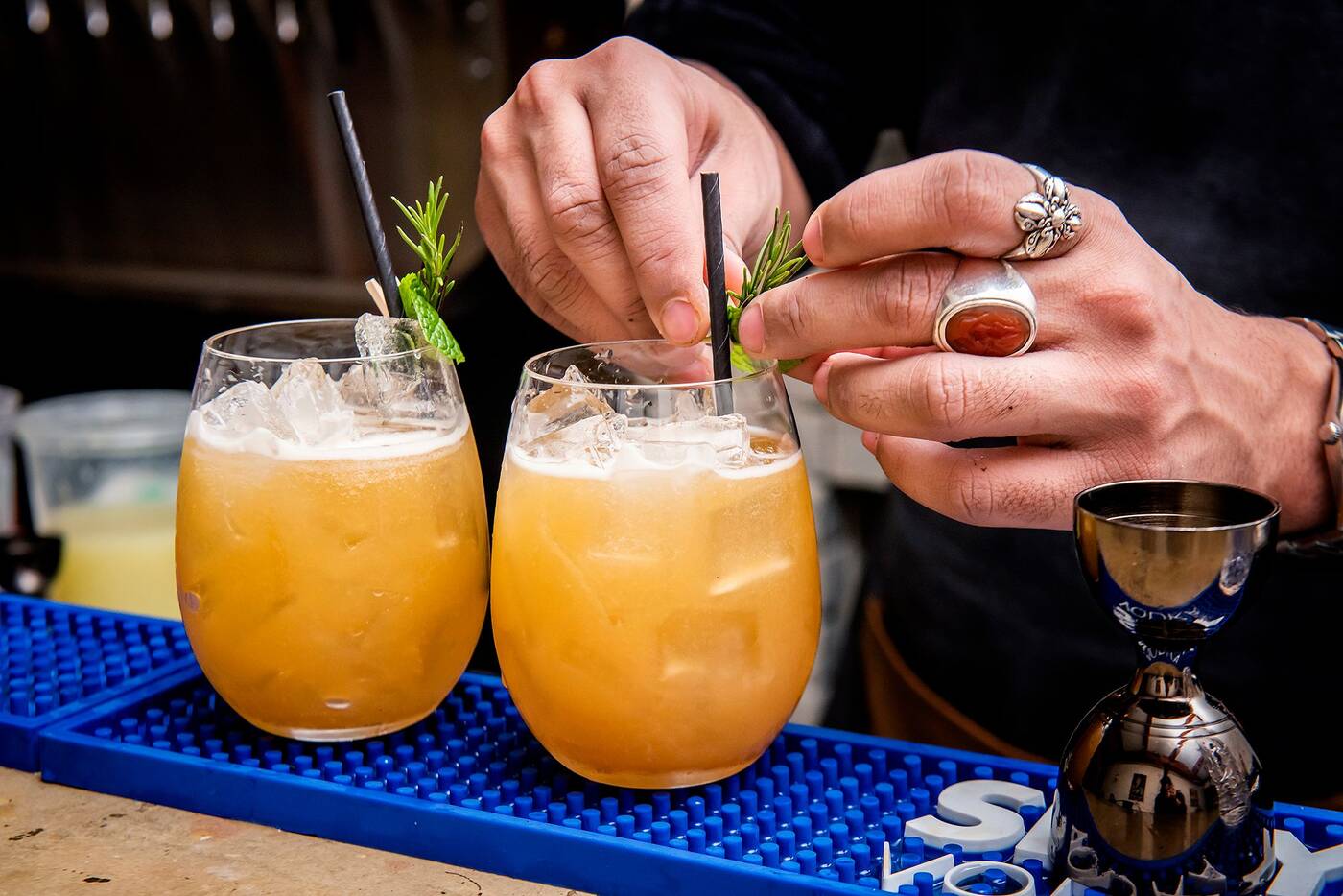 Their house on Blackburn Avenue had an open-door policy, a place where anyone was welcome and you'd find at least a dozen students hanging out at one time.

Wong and Eftekhari made lifelong memories here and wanted to cultivate a similar theme into the culture at Blackburn.

This is why they trusted their friends Mac Savage and Chef Coulton Speight to be brought on to the project and become part owners too. 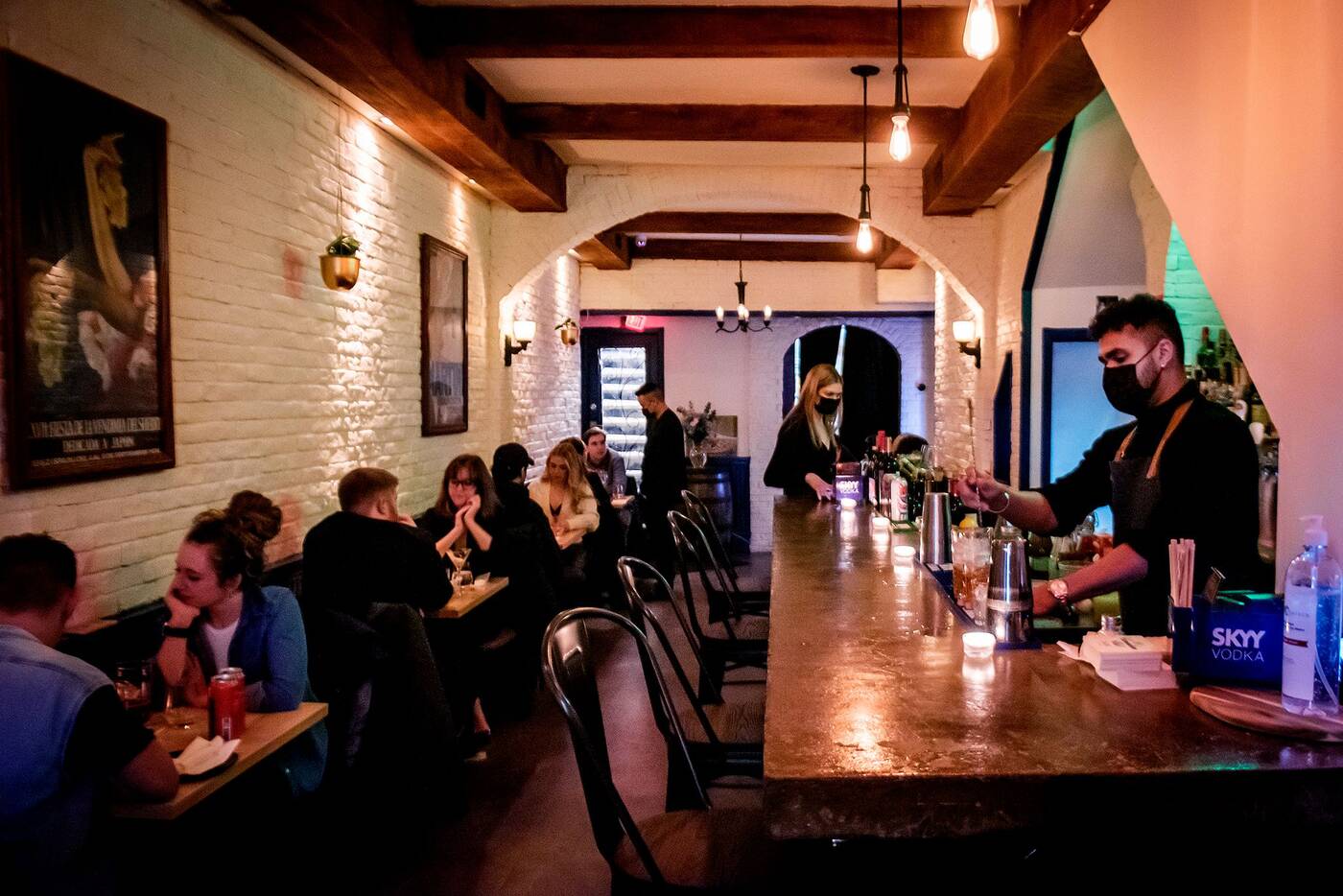 The group worked from the ground up, completing the construction of the space on their own. The interior was transformed from its previous life, when it once existed as L'Absinthe Bar, a few years before.

Exposed white brick walls frame the main dining area, accompanied by a full cocktail bar, and a mix of millenials on dates or with groups of friends dotted around the restaurant.

Elements of fine dining poke through during your experience at Blackburn, expect candlelit tables and incidental playlists of smooth jazz as the chosen soundtrack to dinner hours here. 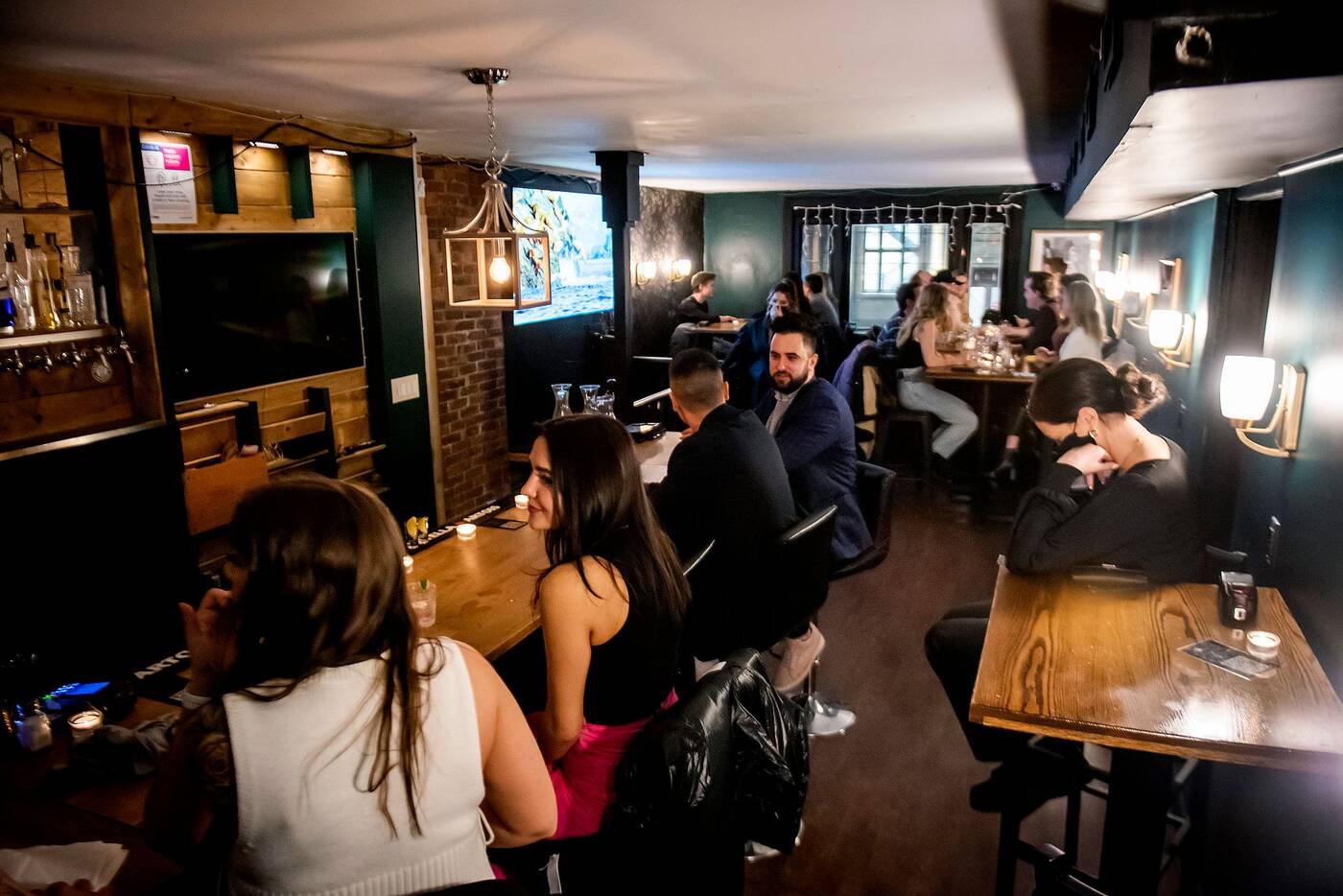 After your meal, head upstairs to the second floor where the party starts into late hours. 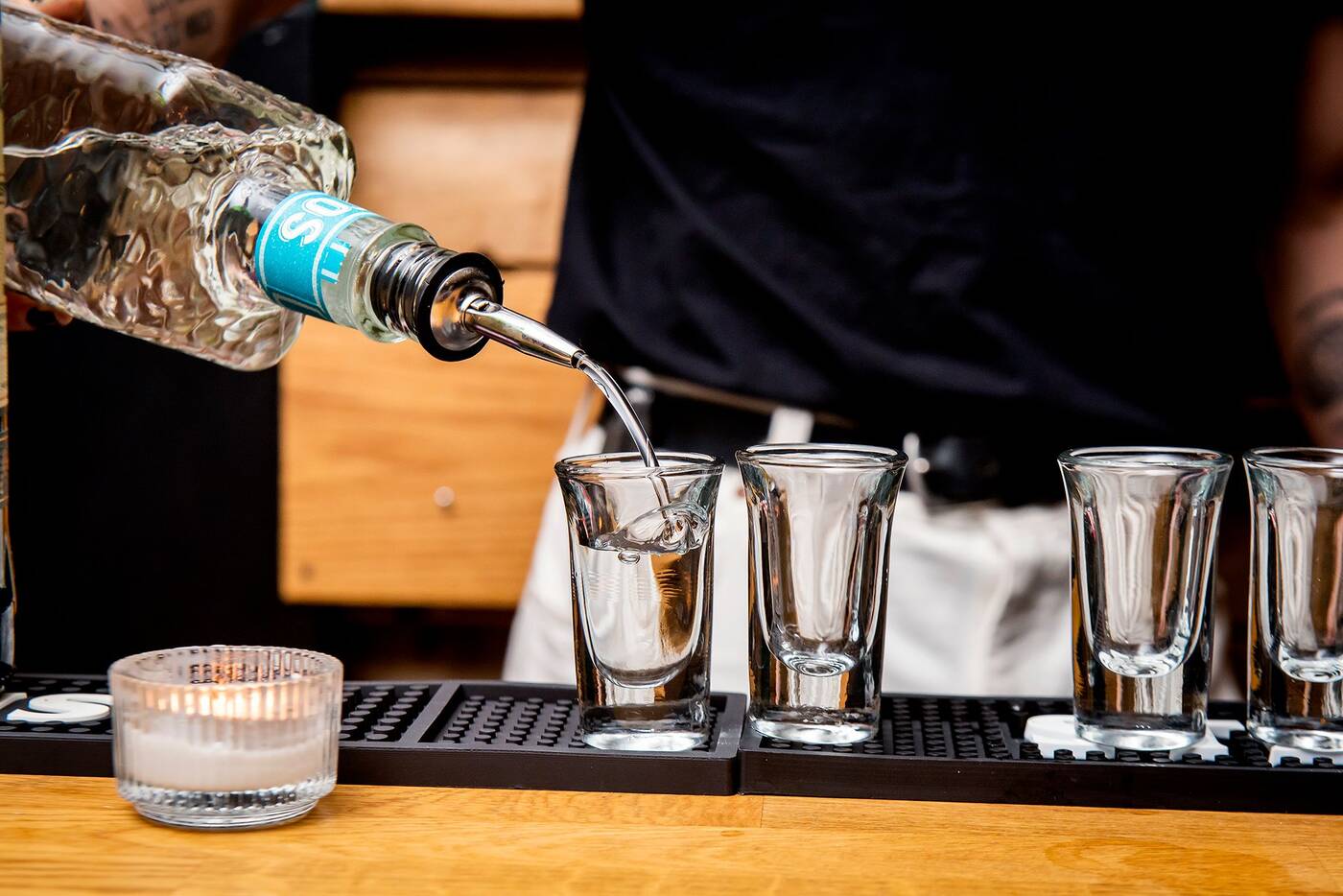 This level of the bar is where you're mingling with other groups, ordering shots for your friends and bumping to a mix of hip-hop of top 40 music.

Back downstairs, Chef Speight takes over the industrial-sized kitchen that sits in the back. He's cooked for the likes of  The London Steakhouse Company in England and the Banff Springs Fairmont Hotel in Alberta. 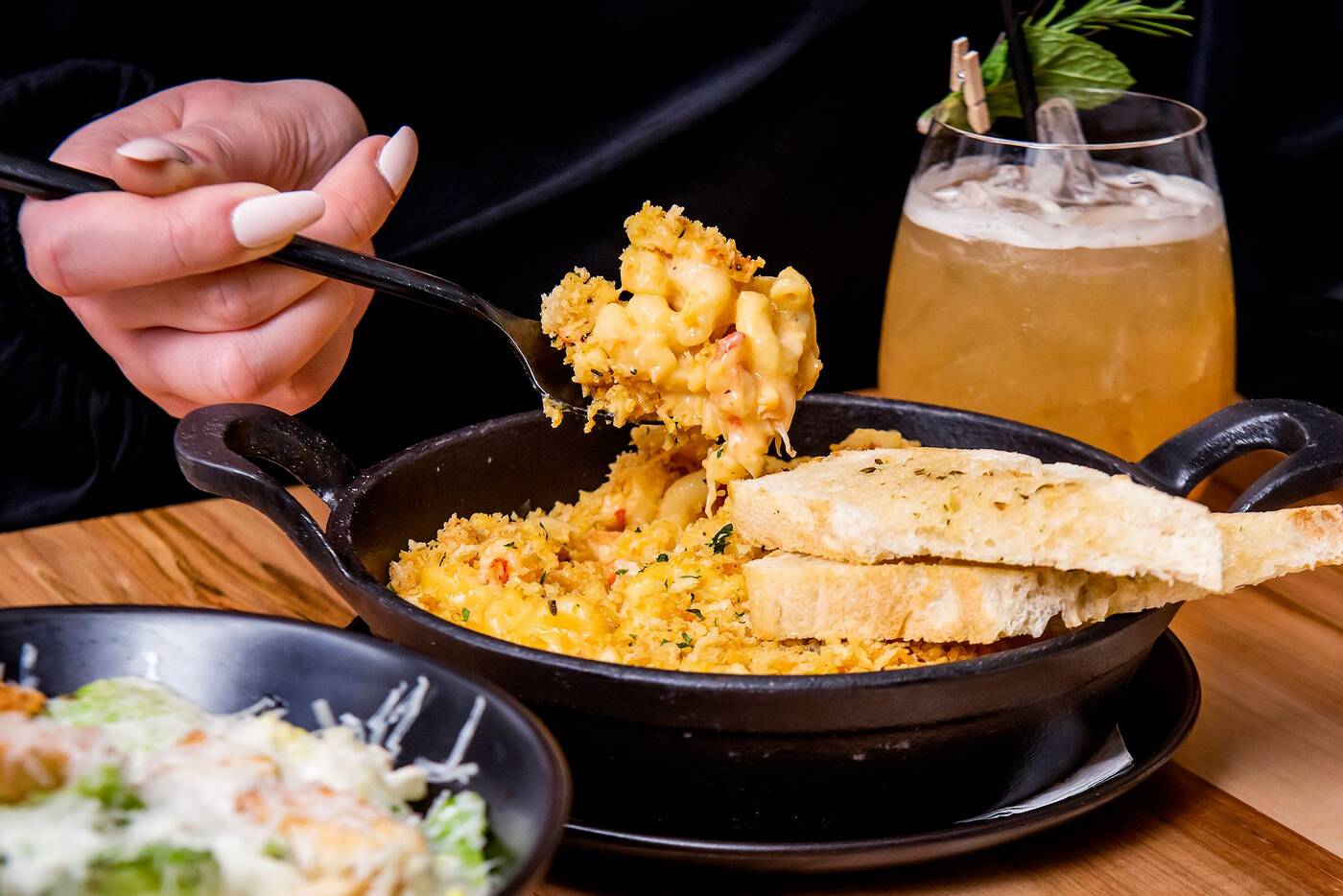 The restaurant does small plates, sandwiches and drinks really well, but I'd say leave the pasta to the authentic Italian restaurants that are just down the street. 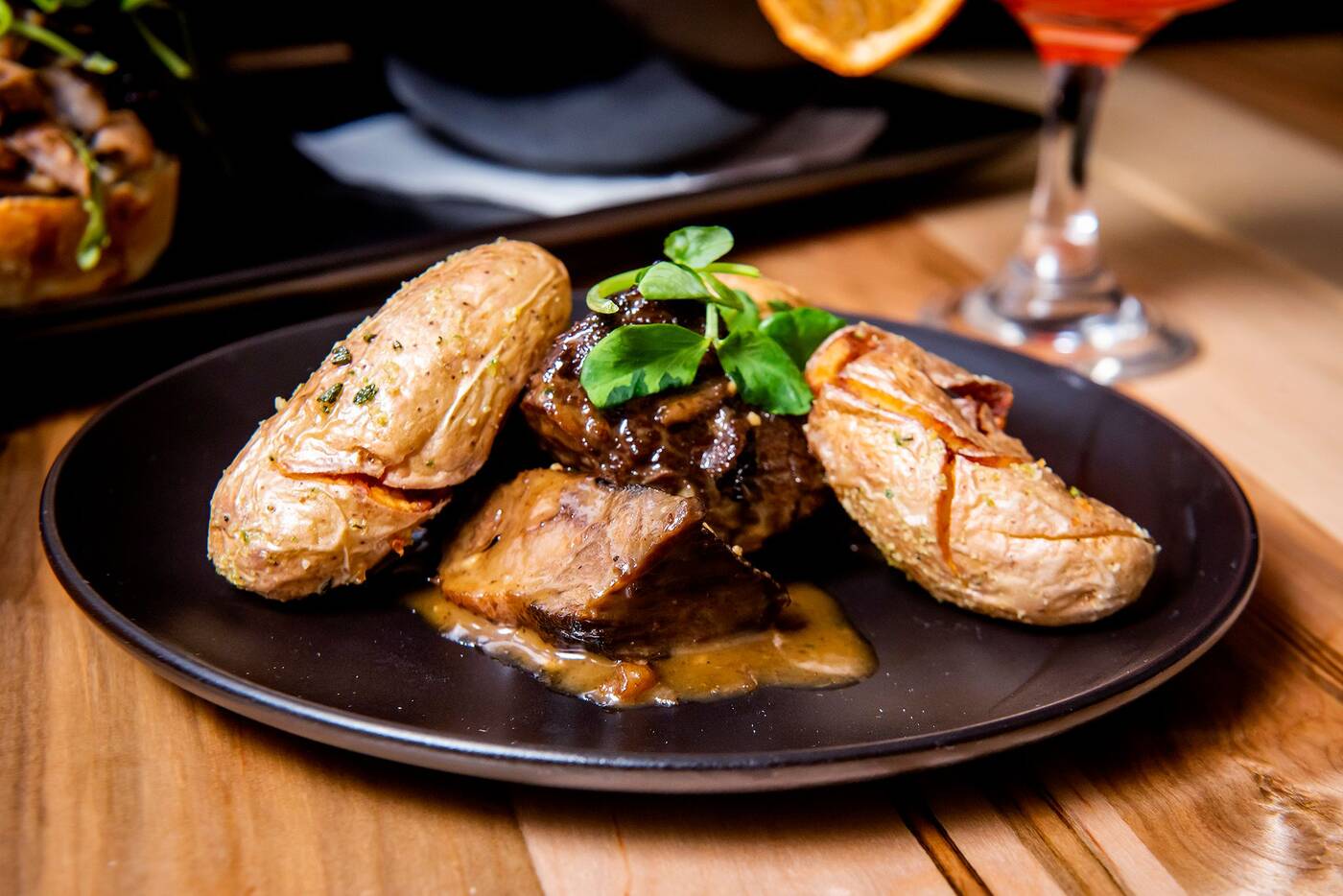 The Braised Beef Short Rib ($16.00) is humming with flavour from the tender ribbed meat that's slow cooked in Red Wine Jus. Two crispy potato heads sit beside this, with a salty, crispy skin baked on the outside. 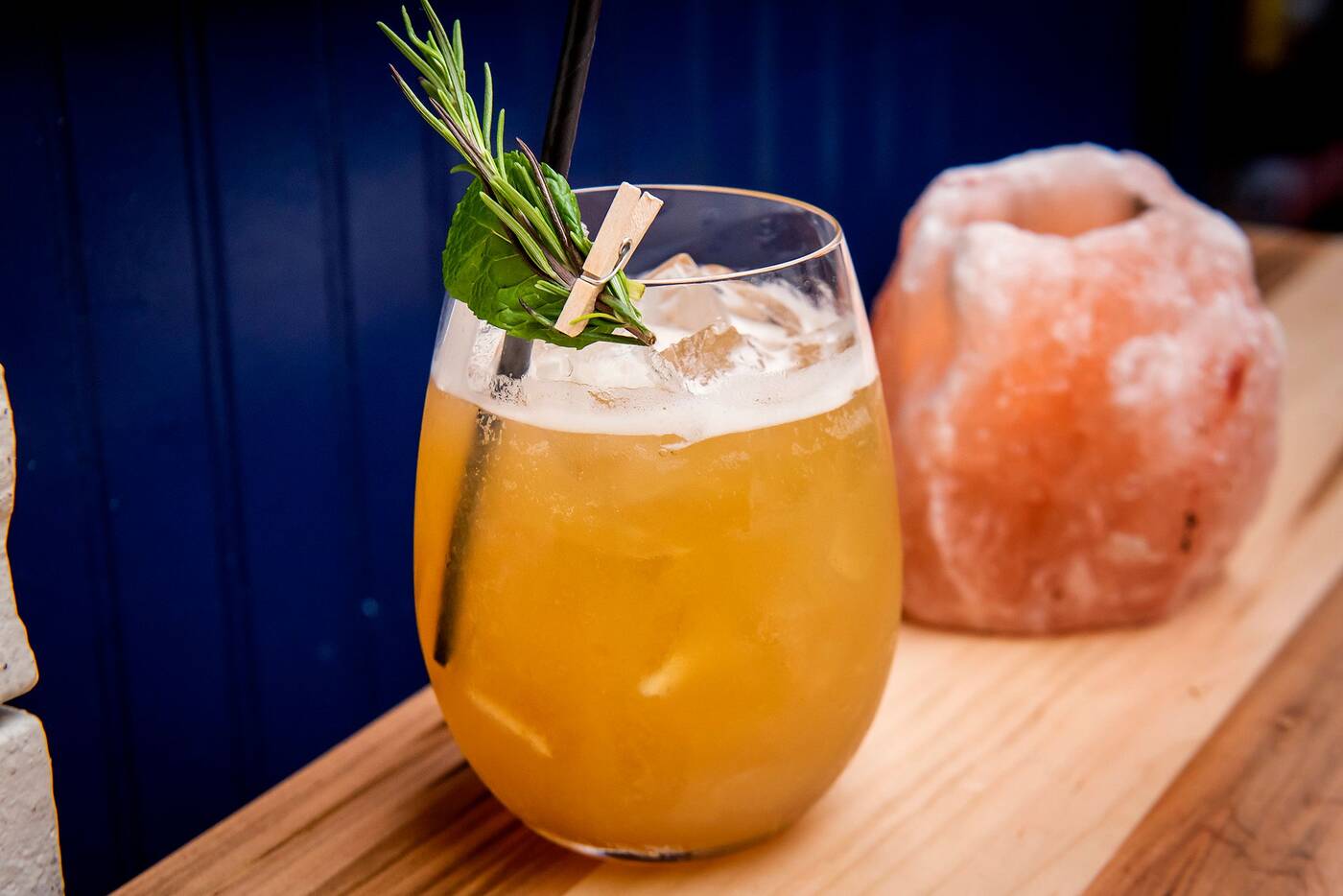 The 262 ($16.00) is a lighter drink to start with and pair with any of the appetizers at Blackburn. Bourbon is infused in-house with orange and rosemary, a creation by lead bartender Brandon Alberga, who also  developed the house cocktail menu.

Mint syrup, root beer bitters and lemon juice tops off this glass with a refreshing citrus taste to it. 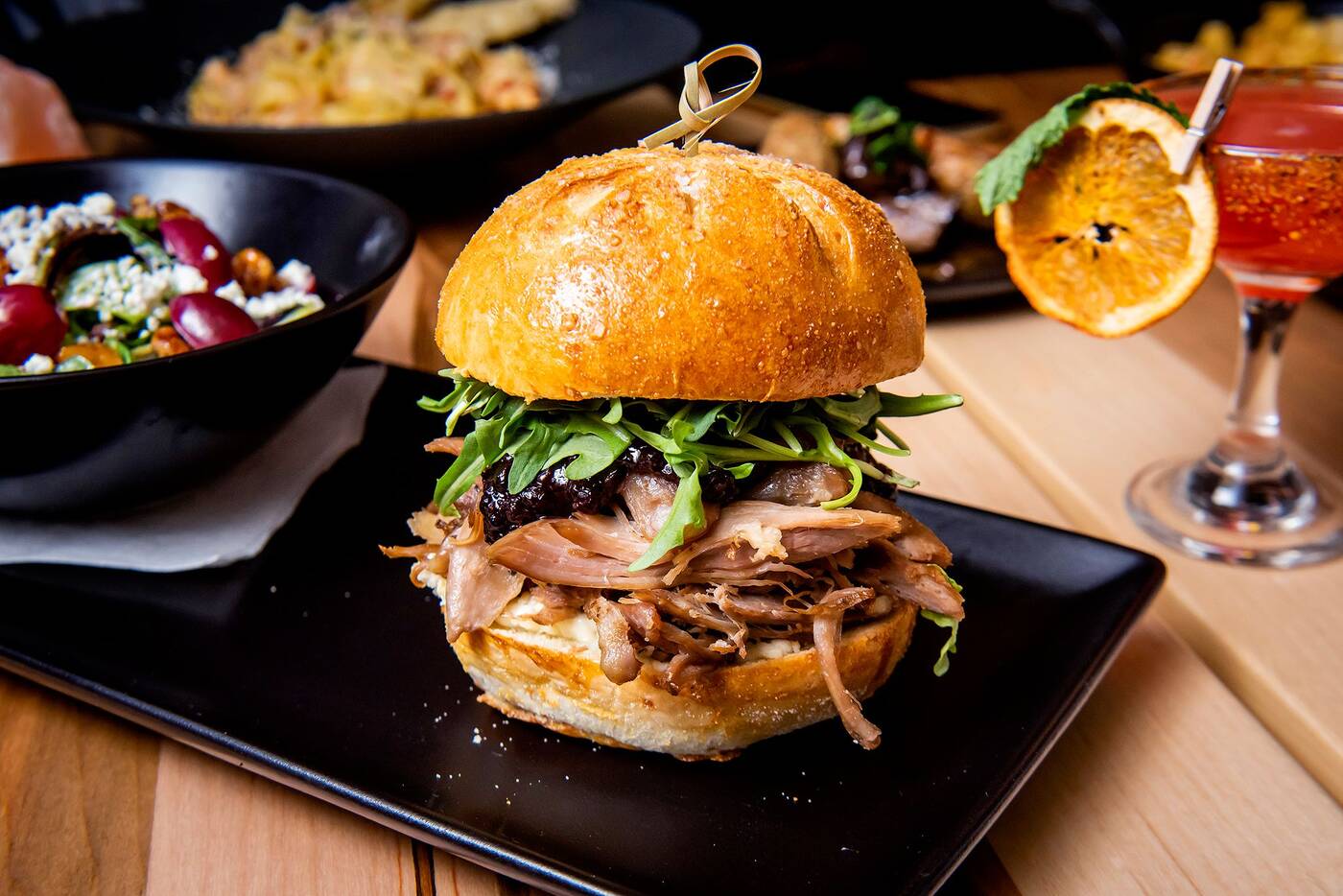 Duck confit a common menu offering in the fine dining world, but instead of on a plate by itself, it's placed between two buns at Blackburn.

The Duck Confit Sandwich ($24.00) combines shredded duck, with goat cheese and a layer of blackberry compote. Arugula tops the sandwich with flavours of orange that compliment the meat. Order any of their side salads as an addition to the meal. 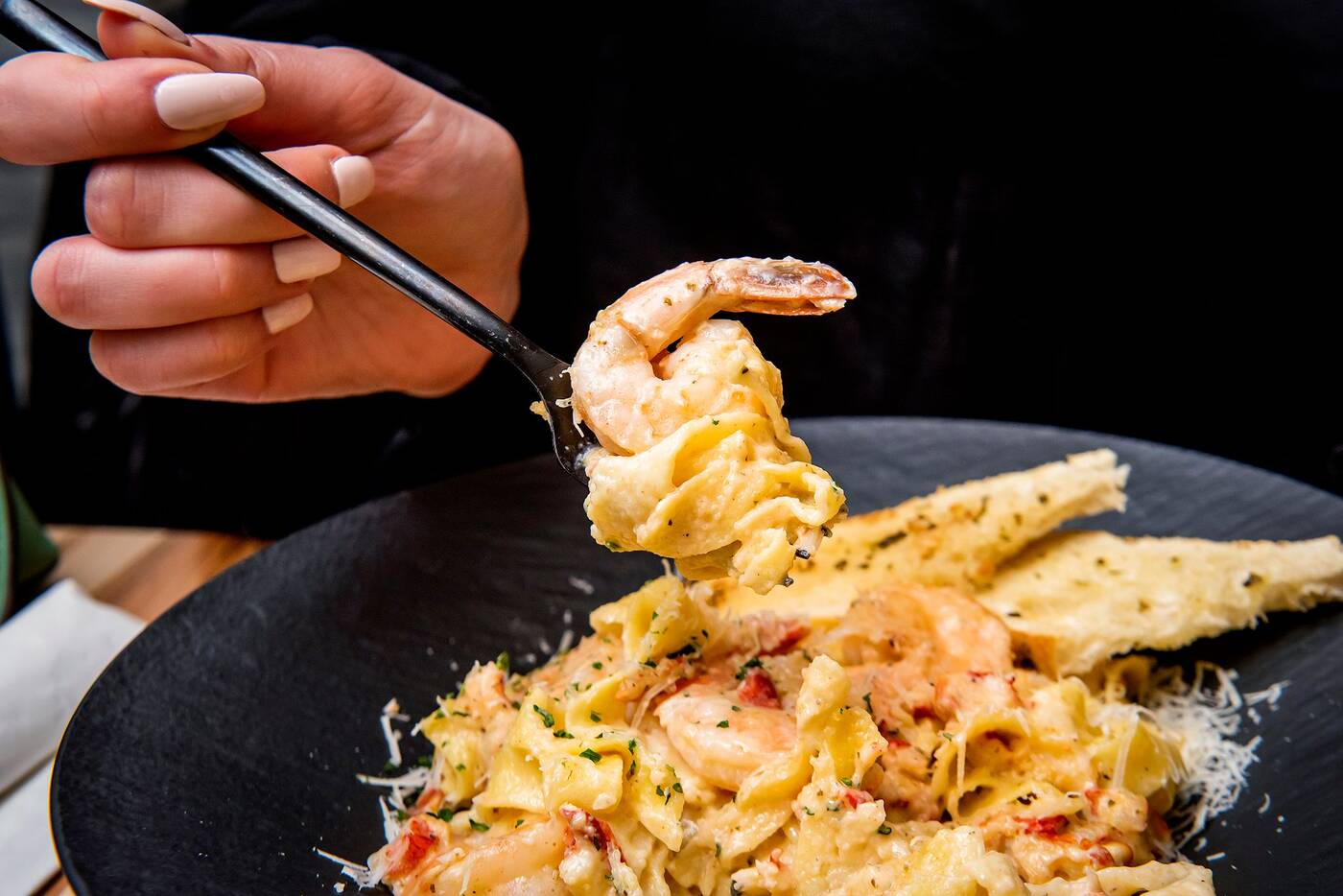 The Seafood Tagliatelle ($32.00) is a bit pricey for what's being offered, but that could be due to the large serving you're getting on one plate.

Handmade pasta is tossed in a tarragon cream sauce and stuffed with loads of poached lobster and bits of shrimp, along with a garnish of parmesean and two garlic foccacia toasts on the side. 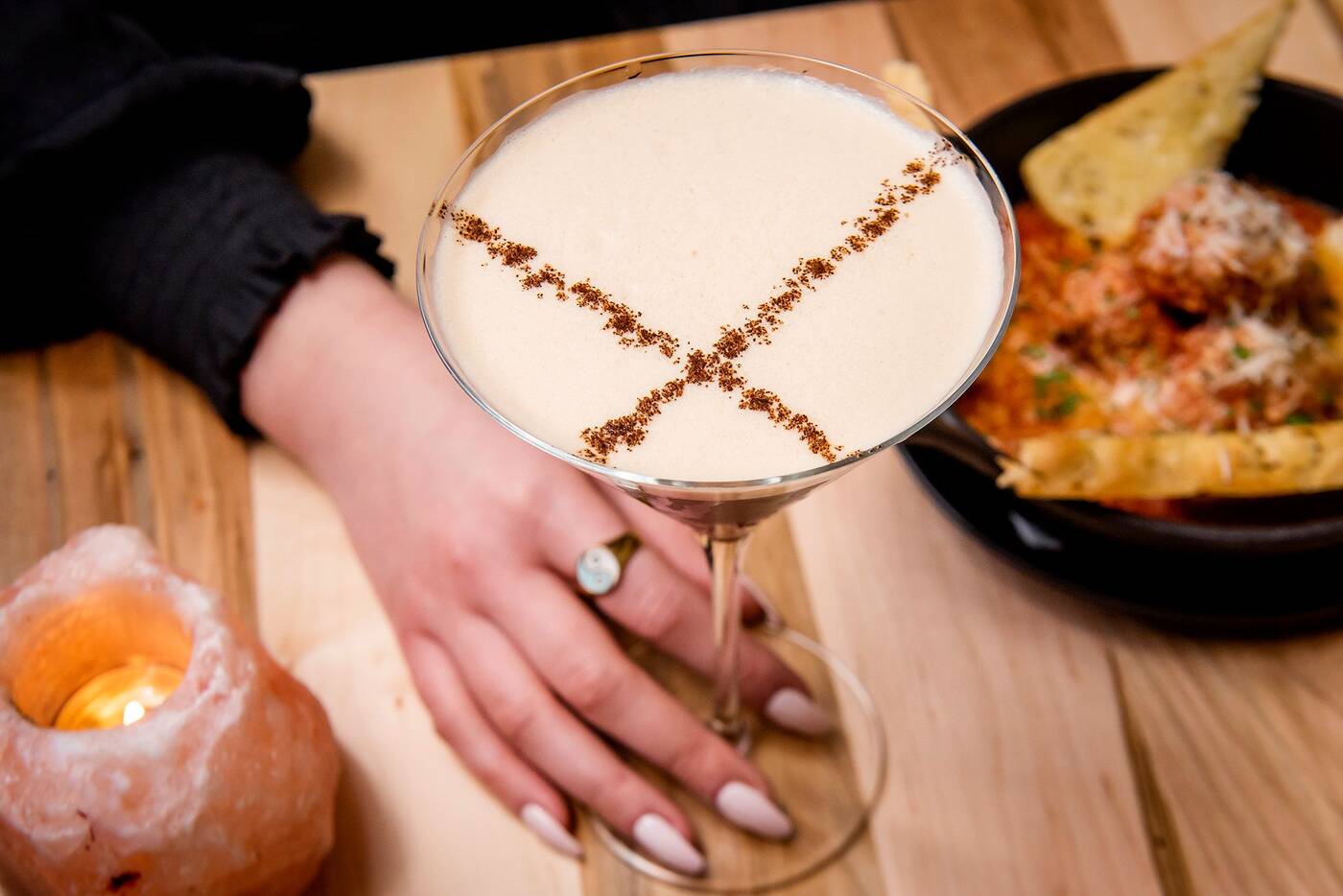 The best tasting concoction of coffee and alcohol, you have to order the Espresso Martini ($15.00) and see for yourself. Freshly brewed espresso isn't overpowering, the drink maintains a happy balance between notes of sweet and bitter.

This is due to it's alcohol components of Absolut Vodka, Kahlua, Disaronno, and Galliano Vanilla Liqour, then Scappy's Chocolate bitters to top it off. 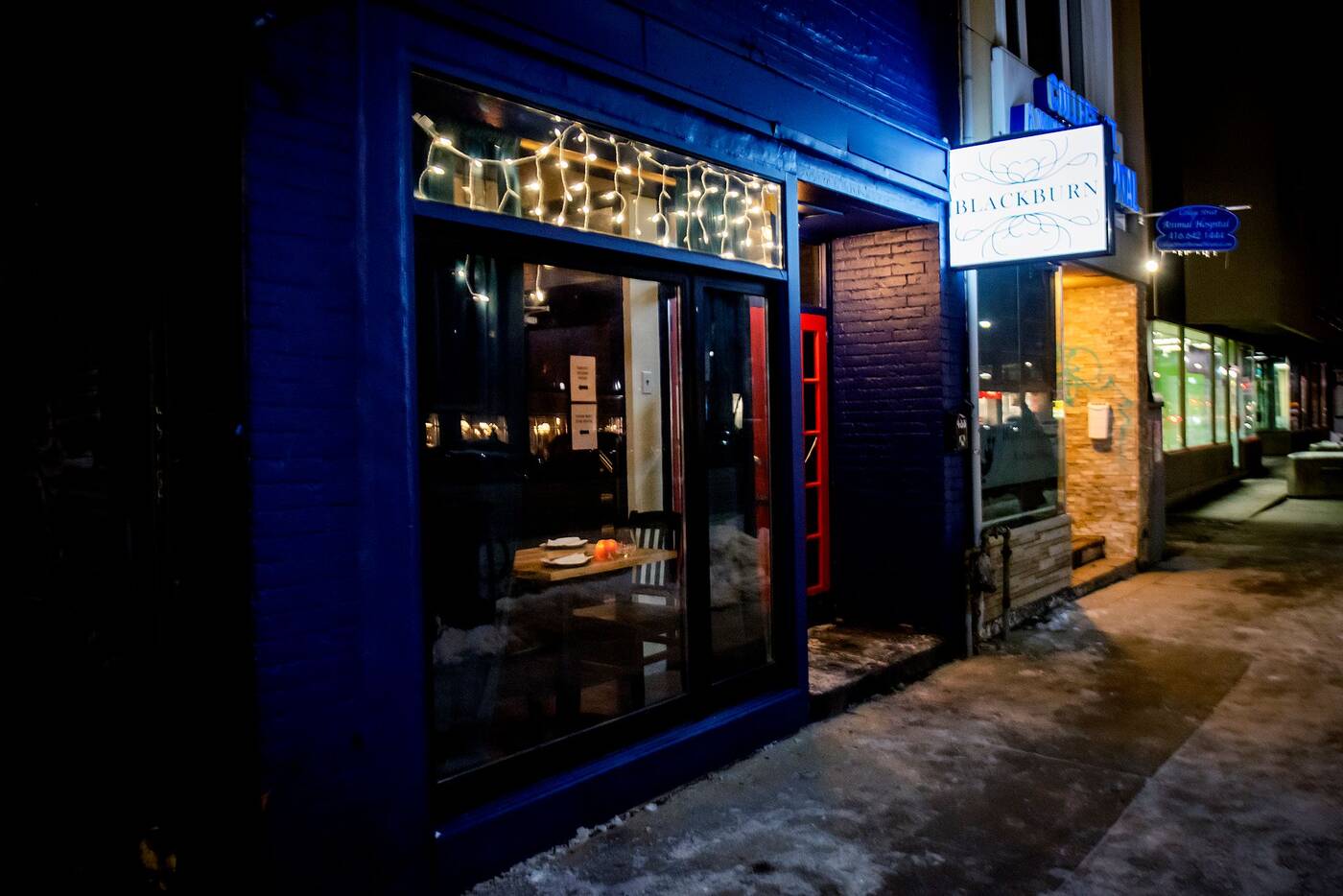 Blackburn stands out among the strip of other bars on College in Little Italy, look for the building painted all blue and its classy sign peeking from the top of the entrance to the bar.