L’Absinthe is, dare I say it, a speakeasy above French bistro Coq of the Walk. I’m reluctant to use that term since it seems so bandied about these days. Every club and restaurant seems to have a “speakeasy element” or “secret” to it these days, somewhat defeating the purpose of the concept.

In truly mysterious form, this bar is only open once the restaurant and its patio downstairs close, at midnight on Fridays and Saturdays. A range of local and imported absinthes await to push you over the final edge of your night, as well as cocktails, snacks and draft beer to reel it back in. 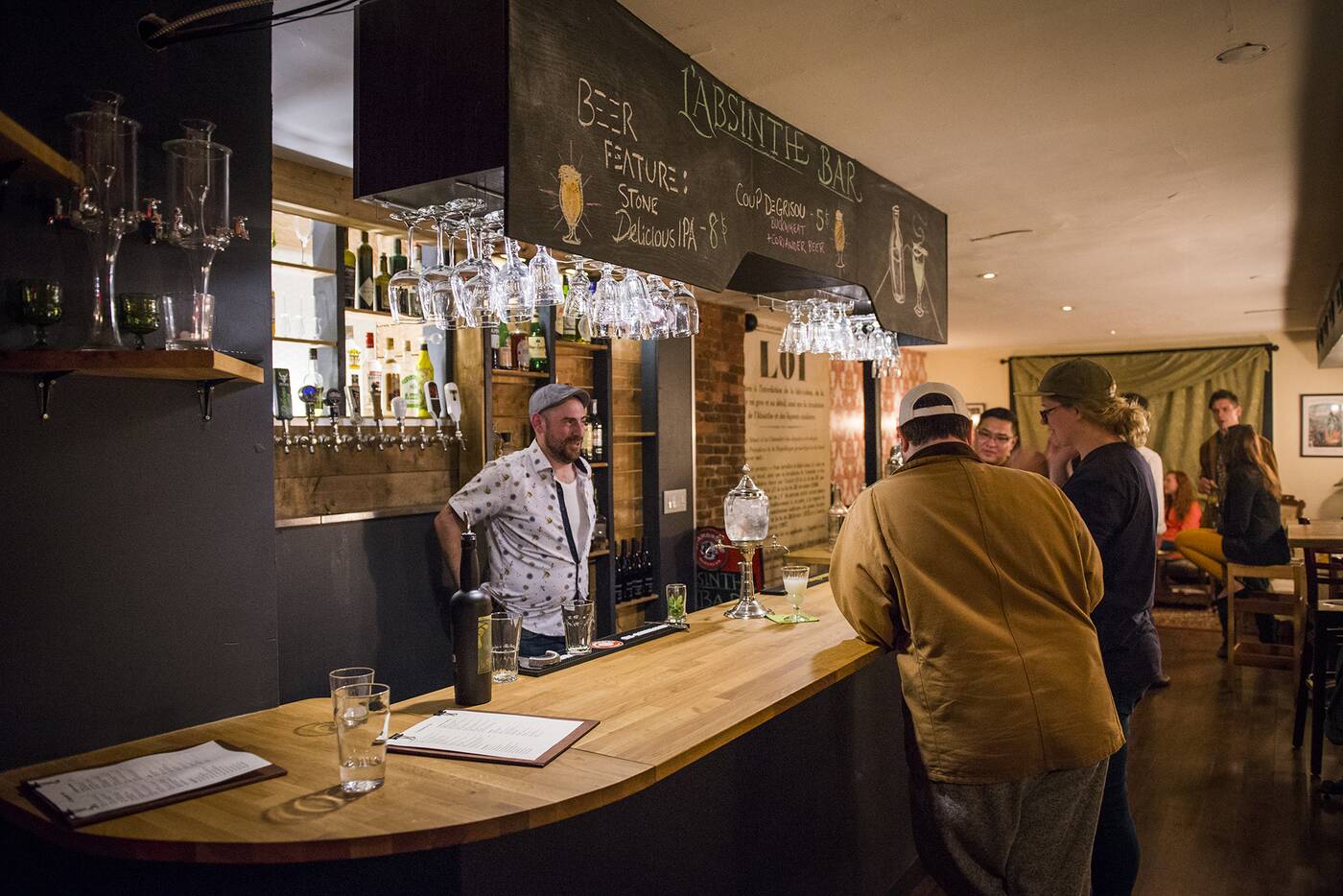 The place feels like a true French social club, which shouldn’t be surprising considering nearly everyone who works here is a French native, including manager Sebastien Daouze from Champagne. He helps out owner Ben Castanie of Snakes and Lattes with this bar, Coq, and his other businesses. 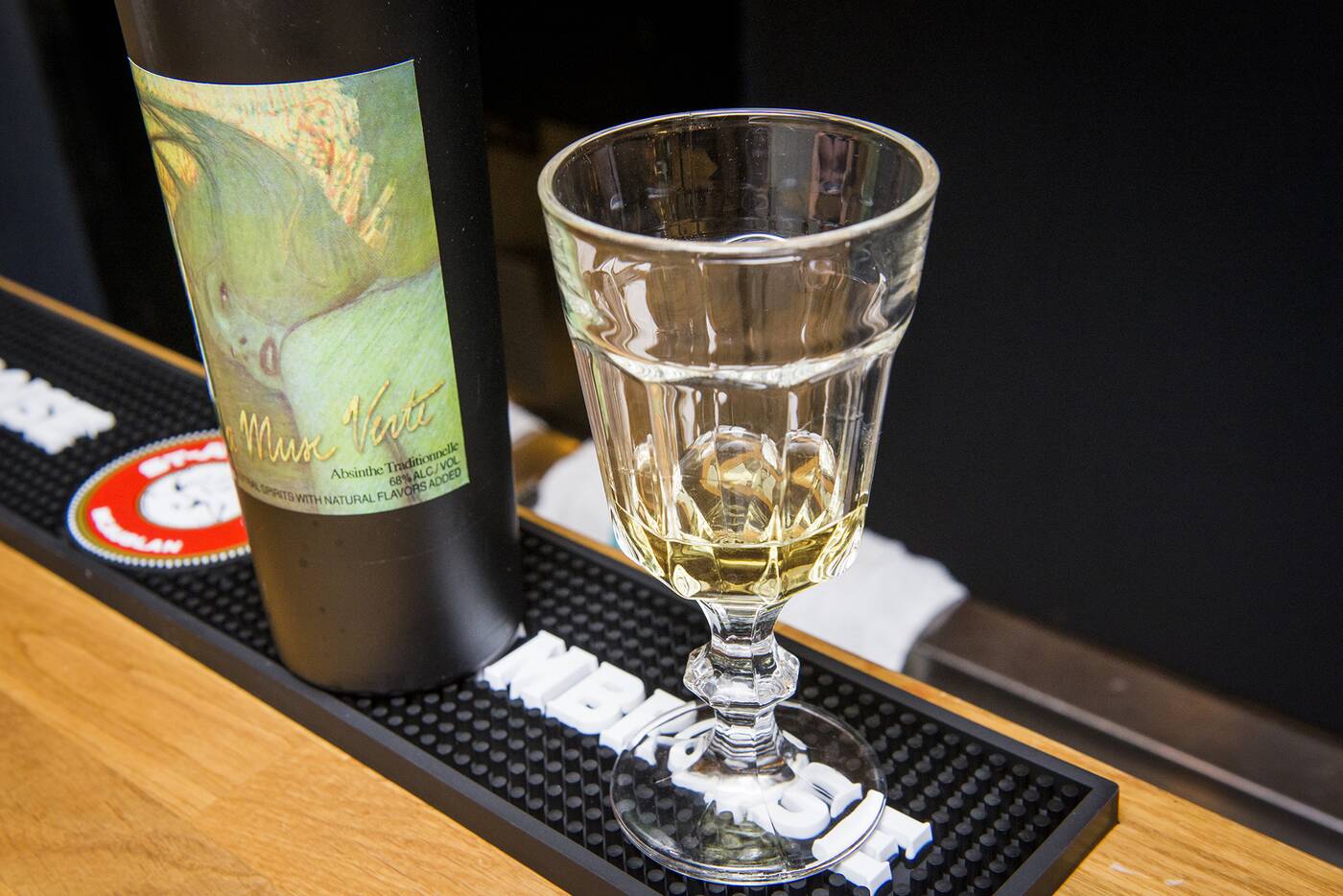 Straight up absinthe options range from locally crafted Dillon’s ($14) to award-winning La Clandestine ($22). Before you get too nervous about prices or too excited, remember that each traditional serving of absinthe is the equivalent to about three glasses of wine. 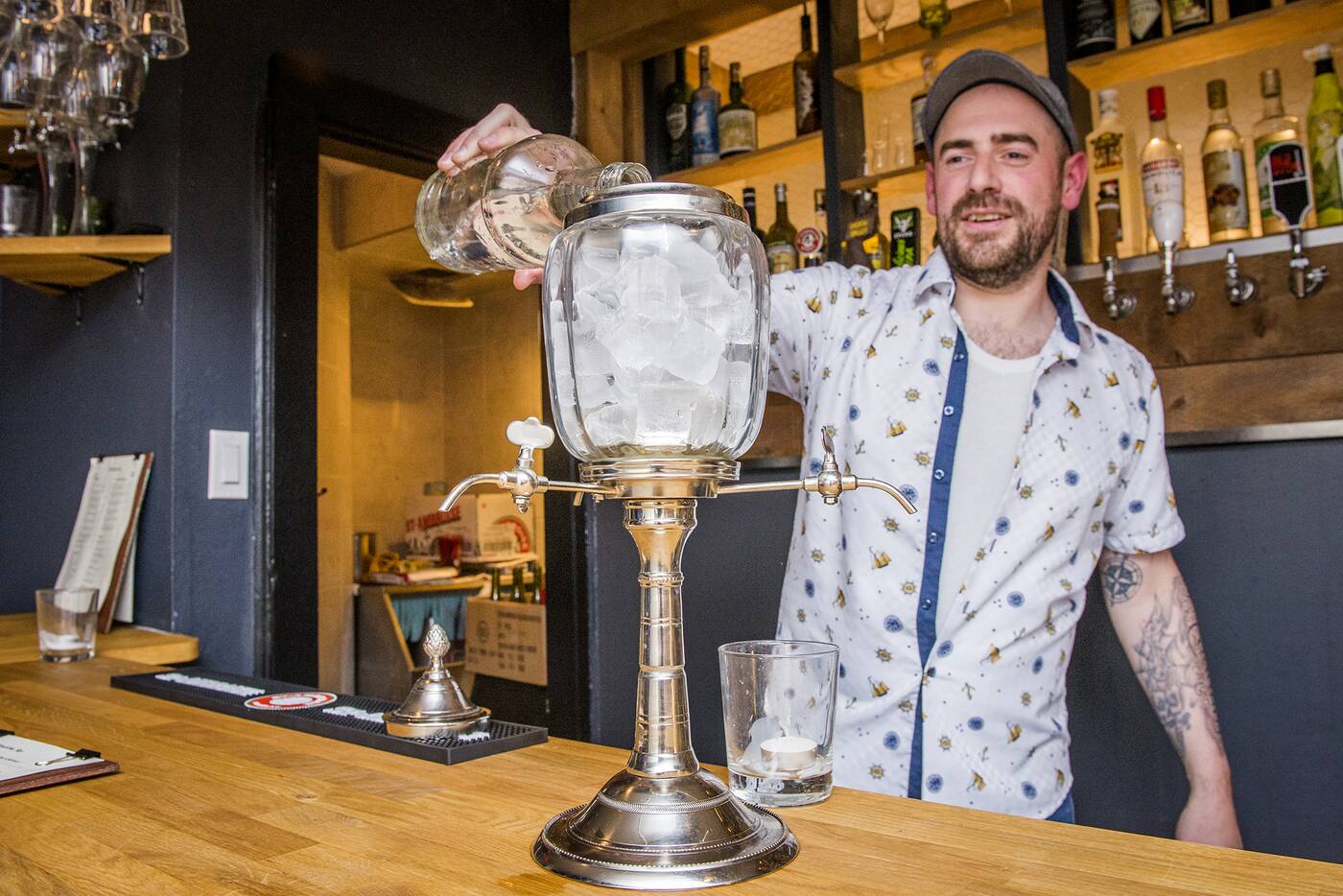 Because of the addition of wormwood, absinthe is rumoured to have hallucinogenic properties, but it’s really just very strong and wildly addictive, though most agree absinthe generally has a vaguely different effect on the whole. 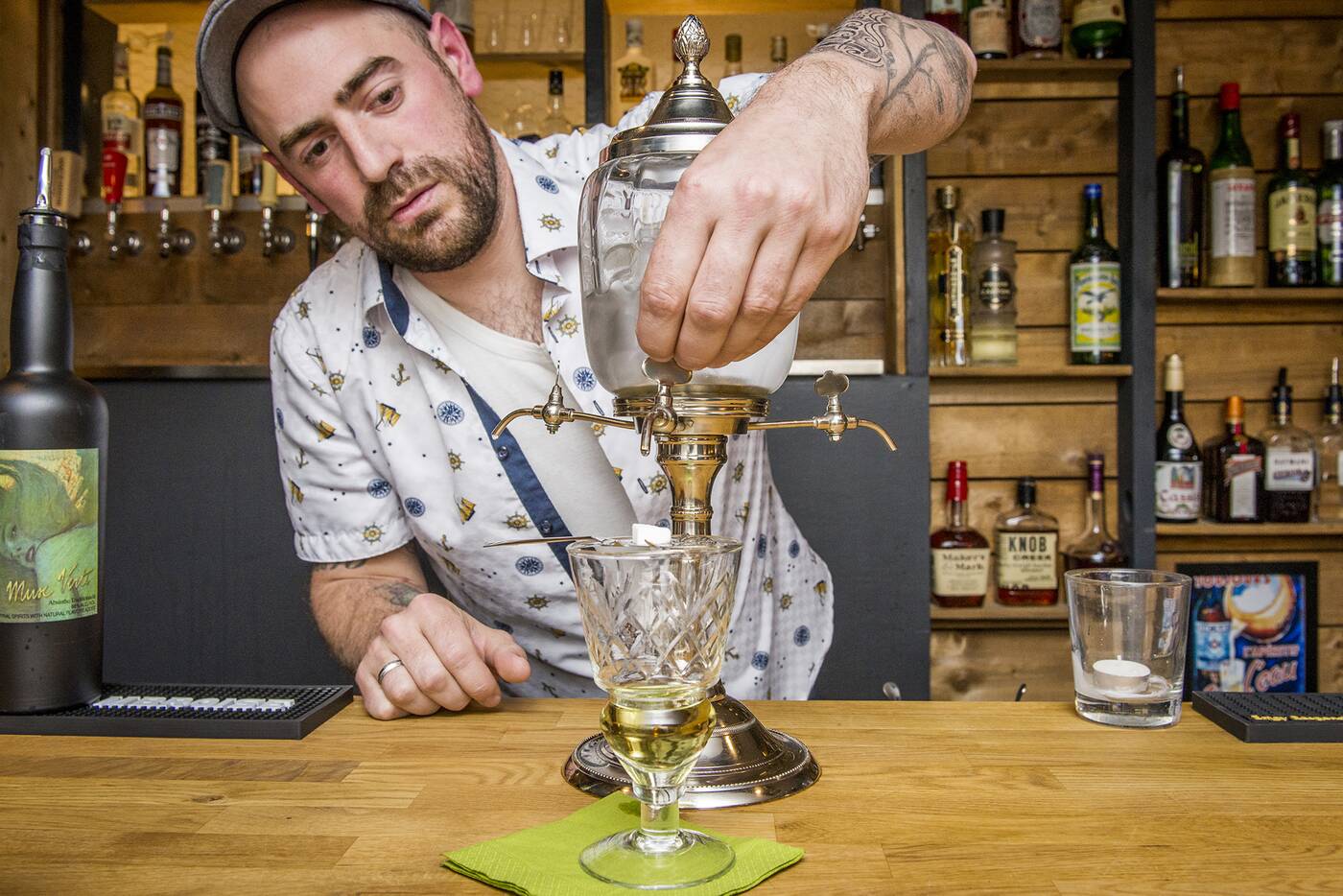 The traditional ice drip process allows for conversation between you and your bartender, so he can explain the finer points about what you’re about to imbibe. 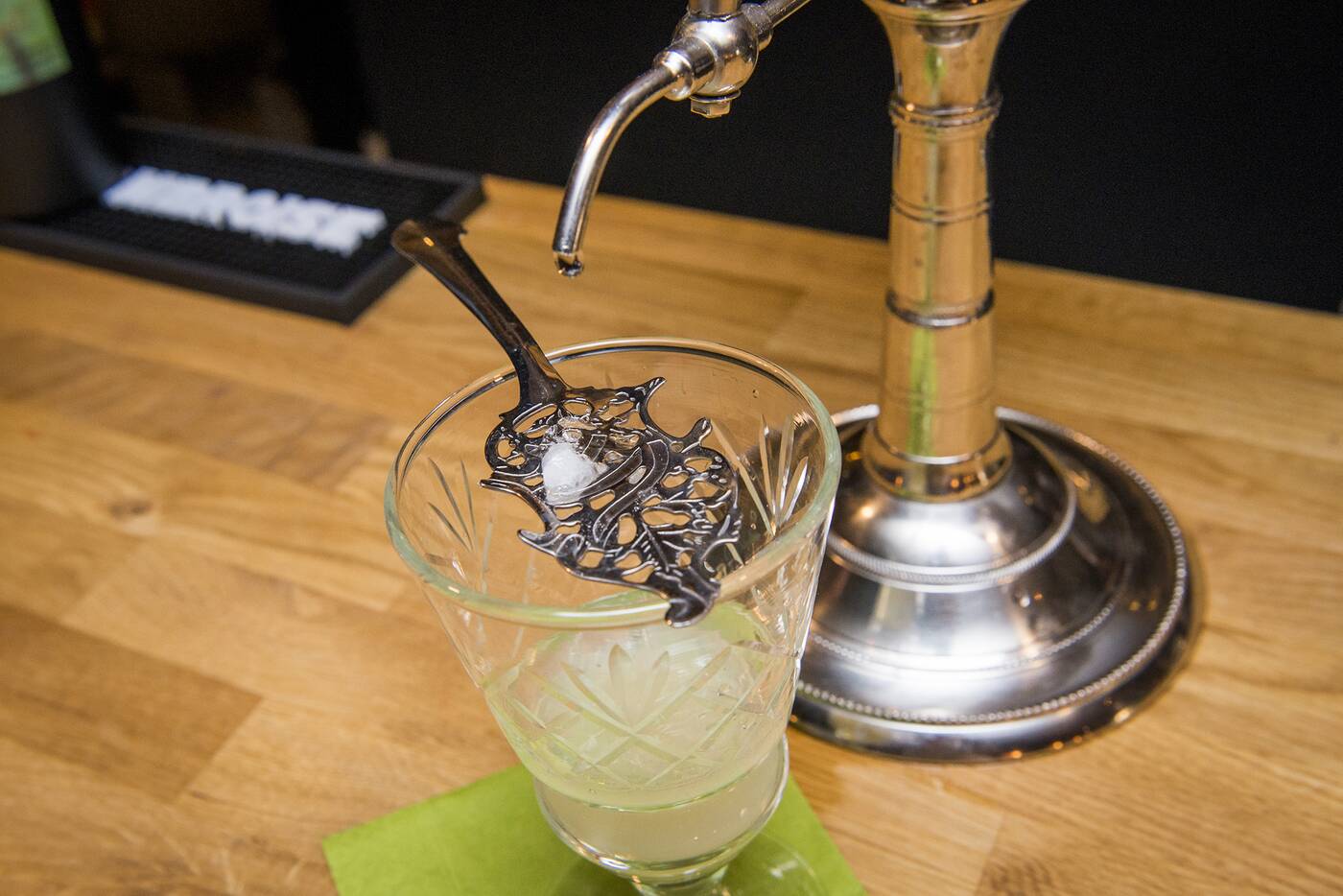 There should be about three to five parts water to absinthe, diluted and sweetened using ice water that drips out of an absinthe fountain onto an absinthe spoon holding a sugar cube (sugar and alcohol are notoriously difficult to mix). This process, which turns the absinthe cloudy, is called louching. 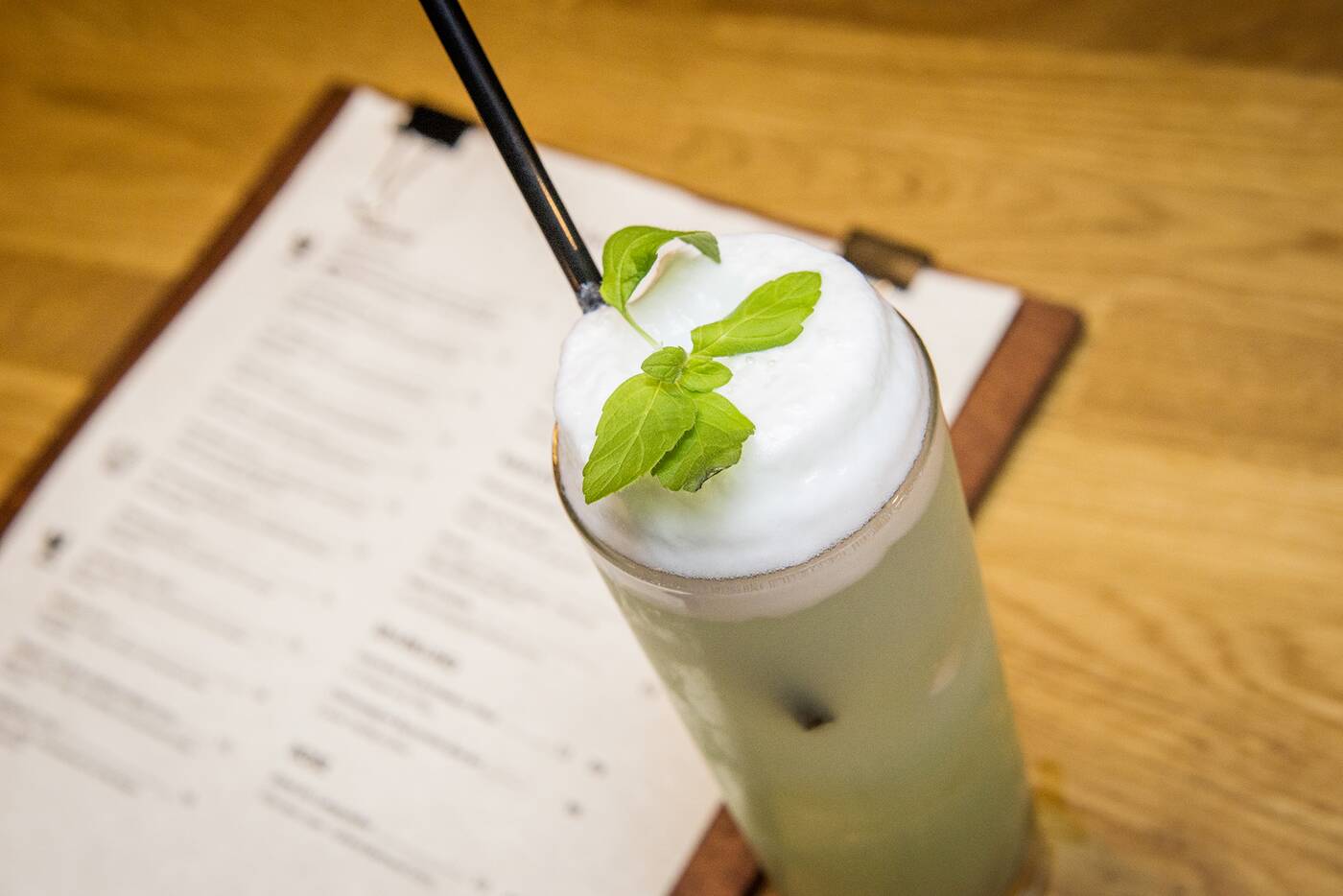 The Fairy Fizz ($14) is one of a half dozen absinthe cocktails on the menu mixing, Dillon’s absinthe with chartreuse, lemon juice, mint syrup, and tops it with soda and a cloud of egg white foam garnished with banana mint. 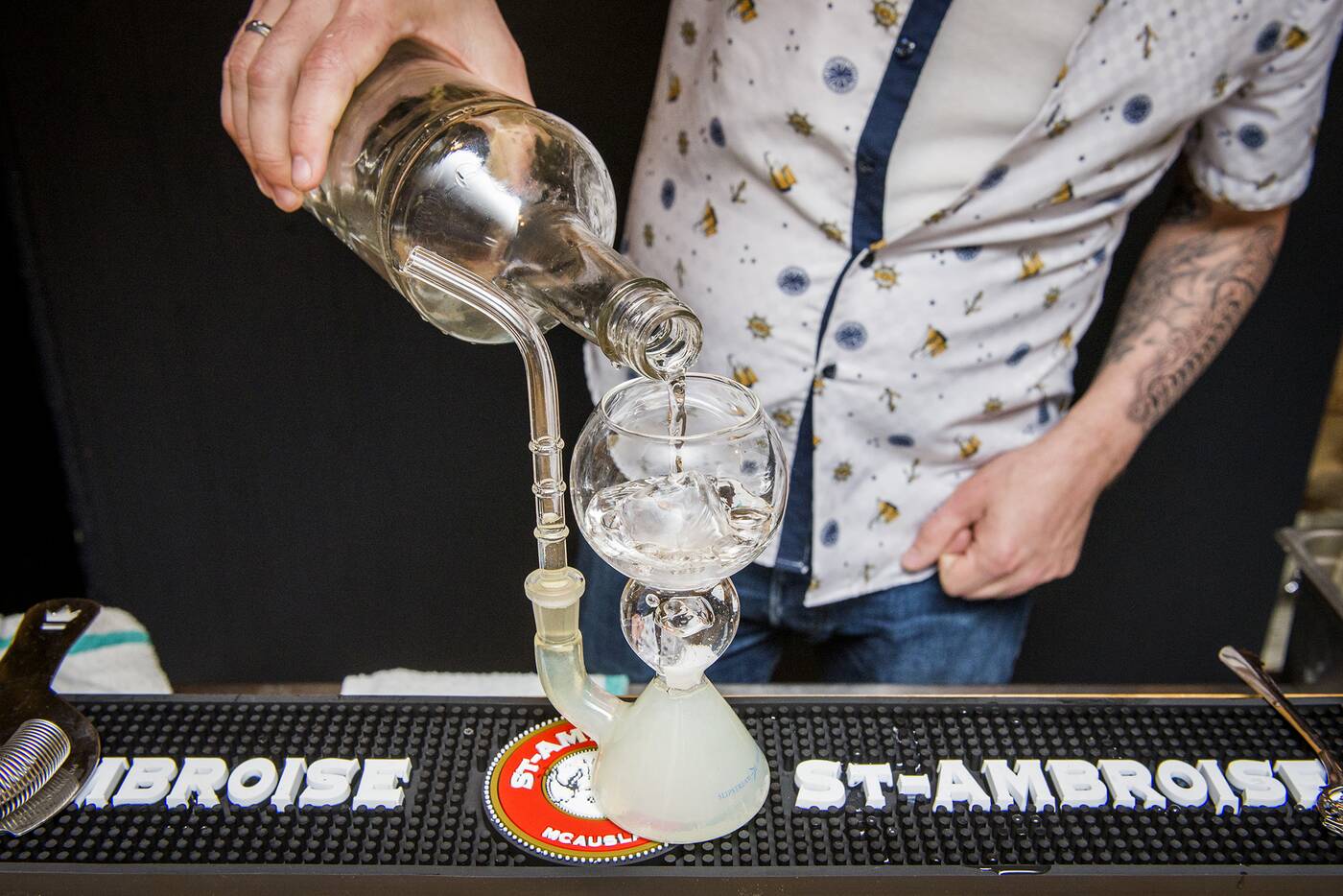 It’s all about inventive ways of serving absinthe here, with other glassware like the Slipstream which streamlines the louching process, fountain and vessel in one. 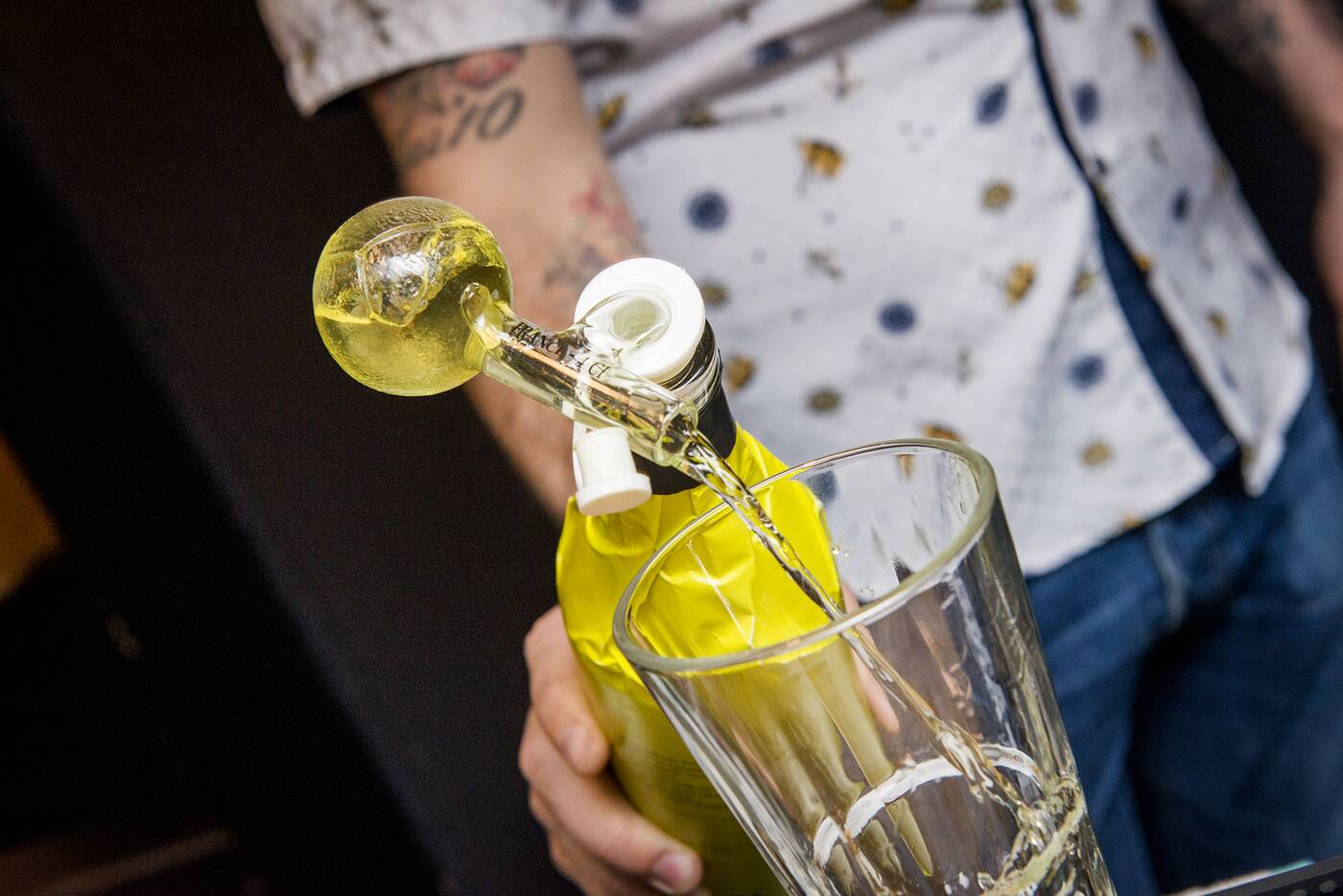 A “boule Ricard” pours the standard French 4 centilitre serving, an ounce and a third. 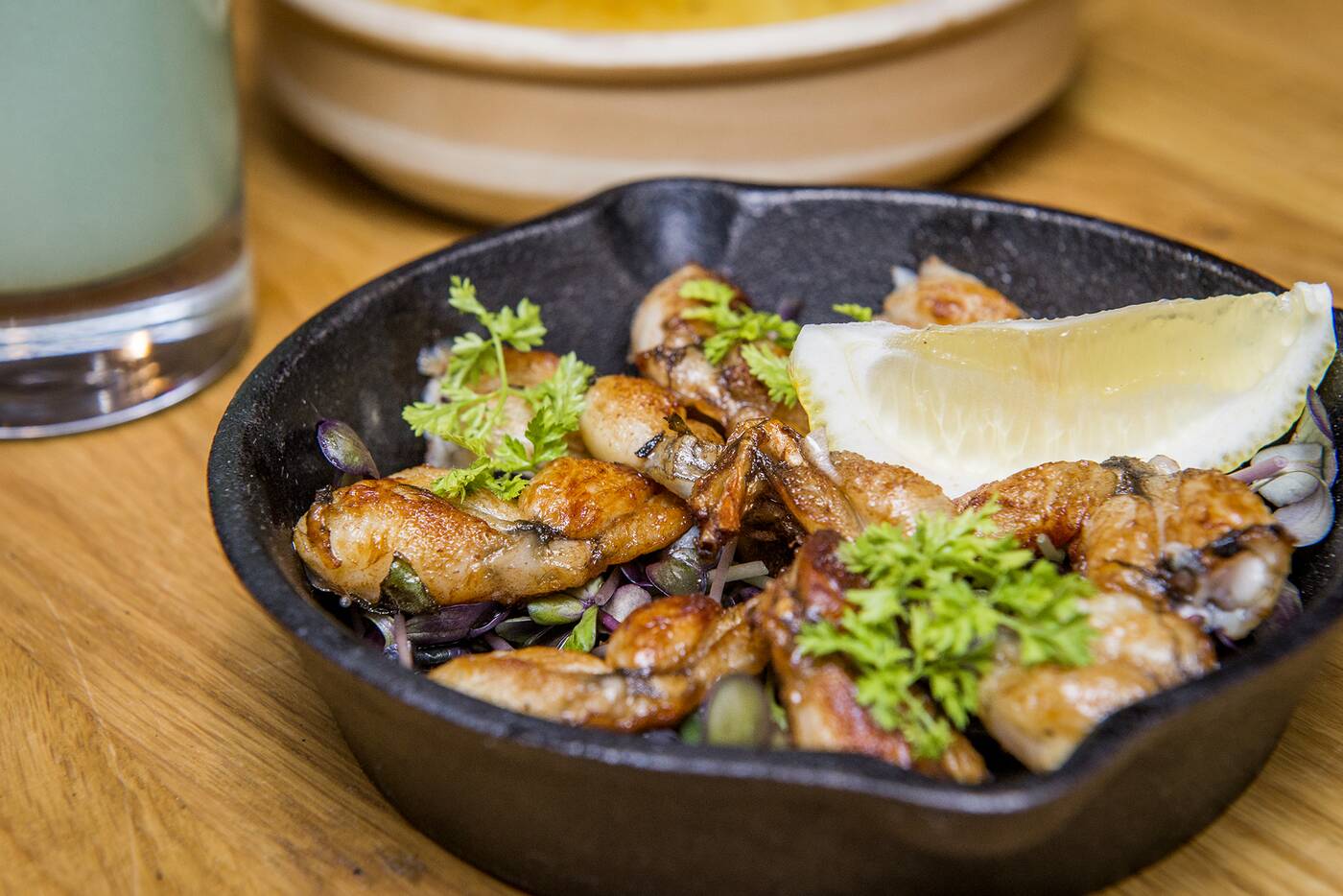 Frogs legs ($8 for three pairs) are small but a sweet and juicy unique late night snack. 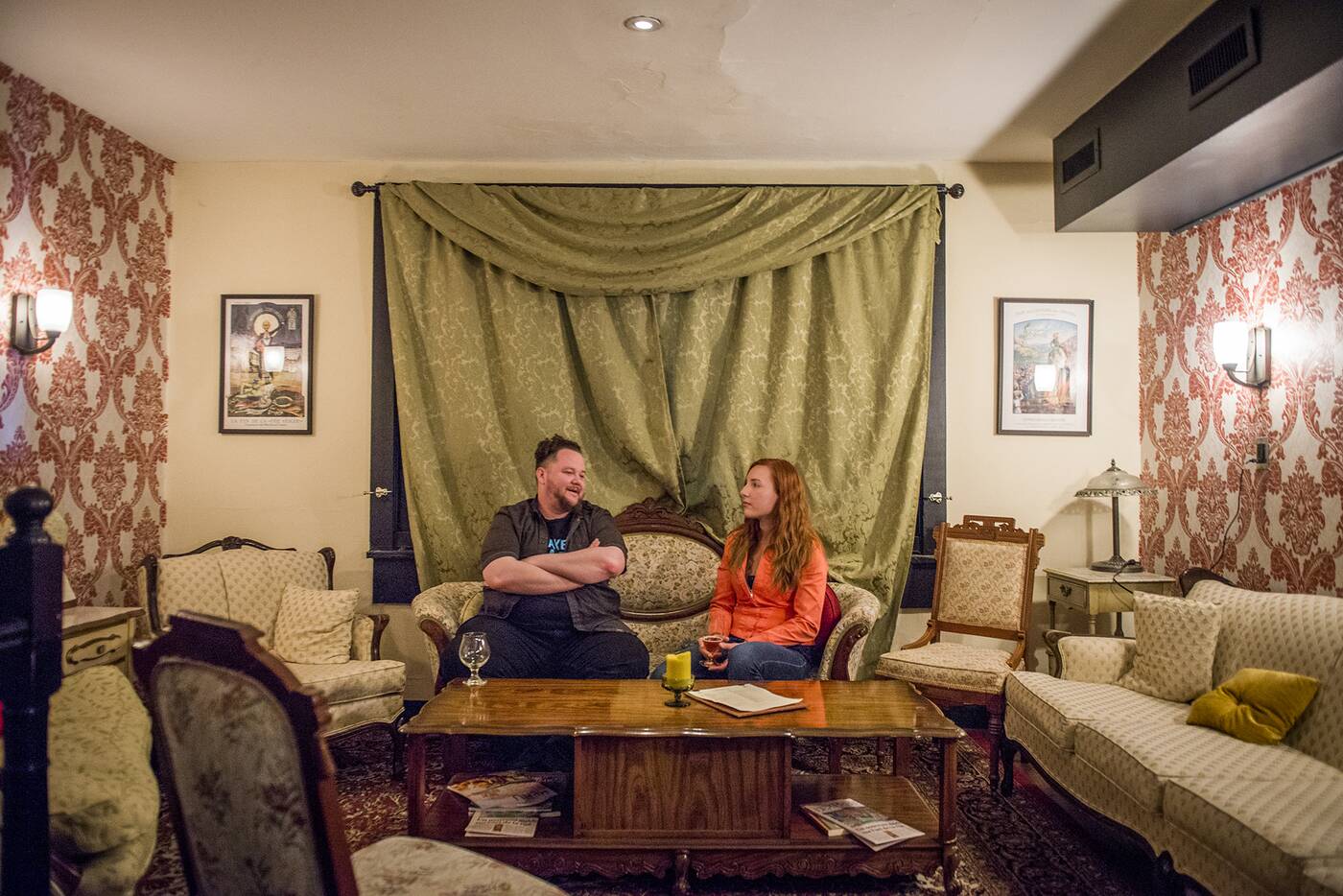 Everything is dark worn wood and lush upholstery in here, from heavy curtains to paintings on the wall of classical depictions of absinthe consumption. The law banning absinthe in France decorates an entire wall as you ascend the stairs. Prepare to be transported, mind, body and taste buds. 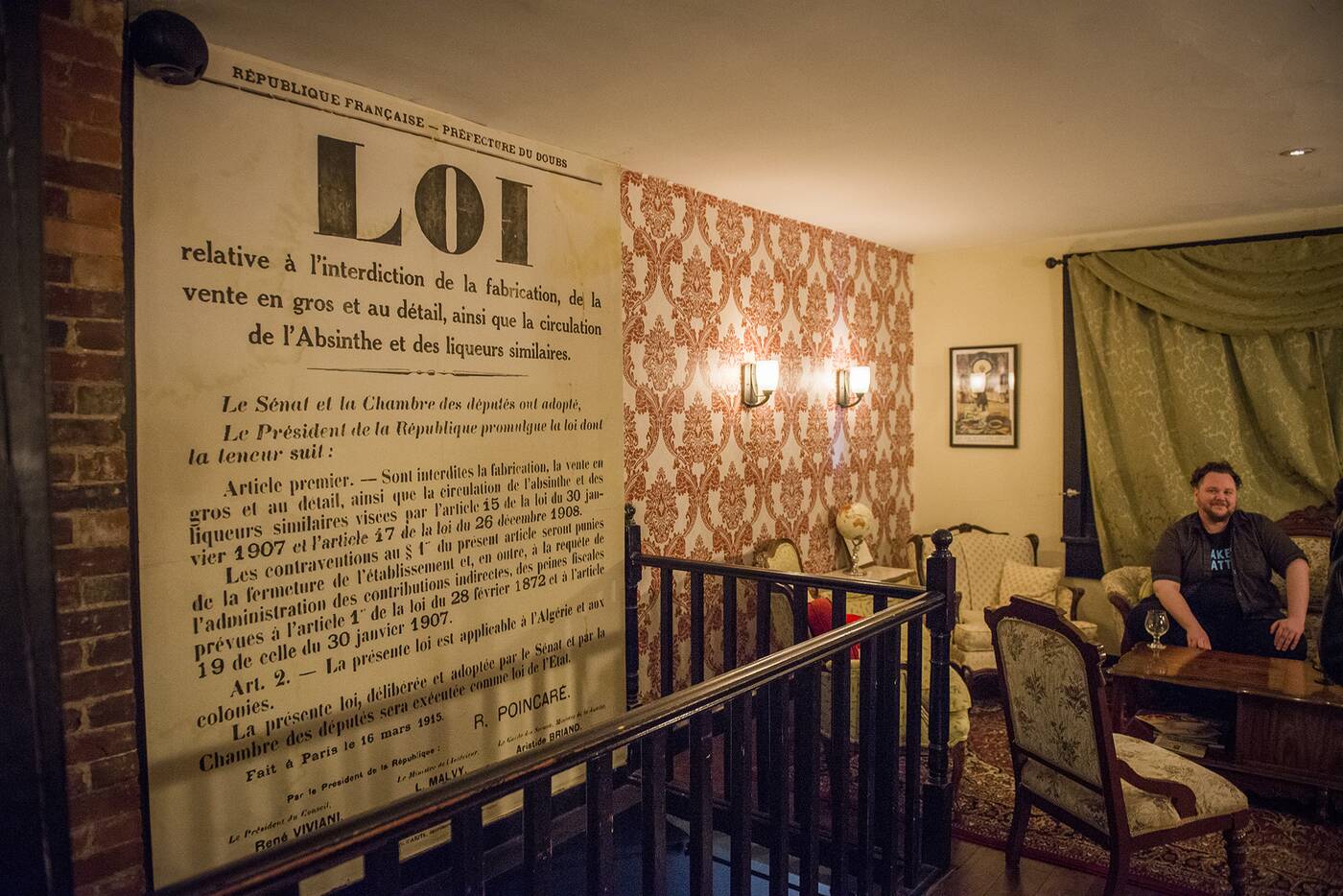