Black Rabbit Cafe opened about two months ago in Bloor West Village , and caters to the young families in the area with healthy, freshly-made snacks for the adult, and kid-sized treats for the kids. The spot is owned by Peter and Alex Kiriakapoulos, and sees Adam Wisniewski ( Lucien ) whipping up the menu.

Although it's billed as a cafe, the thrust of its business seems to be in its rotating selection of sandwiches, salads, soups, and some of the baked goods sourced from Circles and Squares bakery. 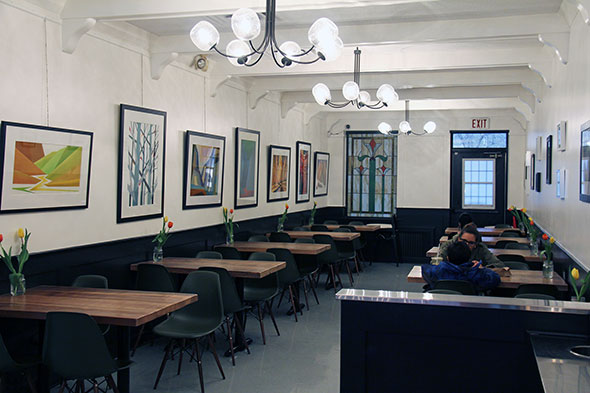 The space itself opens onto a display counter, then turns into a casual dining room with simple wood tables and black chairs, and a pleasing array of paintings on the walls. There's also a selection of take-home coffee accoutrements like tea strainers, espresso and coffee makers, and Theobroma chocolate.

Black Rabbit serves breakfast through dinner (from 7 a.m. to 8 p.m., with slightly later hours on the weekends). Its mandate is to serve "local, natural, organic, healthy and delicious" food. Their deli meats are brought in from Beretta Farms , and are nitrate, antibiotic, and hormone-free (and also ethically-raised), and their breads come from Ace , as well as some organic options from St. John's Bakery . 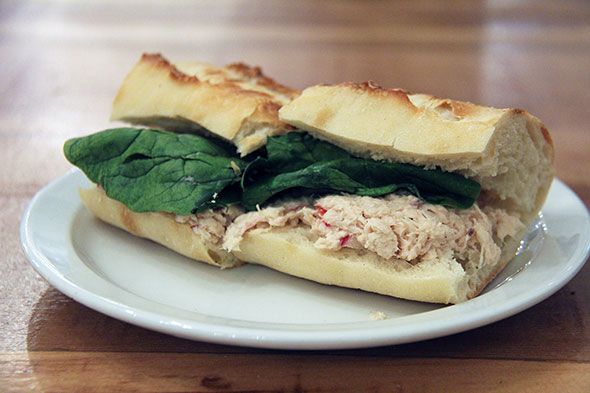 To start, we opt for the tuna salad sandwich. I was absolutely ravenous when I stopped in just after 5 pm, so I was slightly disappointed by the petite size of the sandwiches--I'd have been happy with something double the size, especially for $7.95. Nevertheless, the flavours of diced green bean, green onion, spinach, and red pepper are distinct, and the tuna has a light taste despite being oil-packed. The freshness of the crusty white baguette from Ace Bakery is a definite highlight. 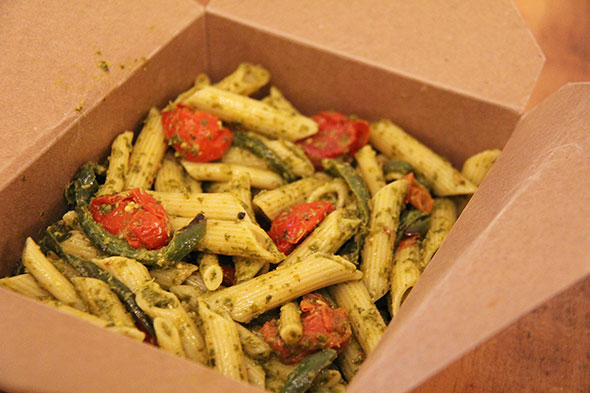 We also try the dairy-free pasta salad ($7.95). The kale pesto is rich and not too salty, the green peppers are fresh, and the cherry tomatoes are beautifully roasted for a bit of smokiness on top of their standard tart flavor. The pasta itself is fairly standard penne, and the portion size is great.

Next is the HAC ($8.25), which is similarly sized to the tuna, but more filling thanks to ample amounts of organic black forest ham, gruyere, and what I'm fairly certain was spinach, rather than the intended arugula. Those flavours alone would meld nicely, but the added touch of apple butter adds a nice bit of sweetness. 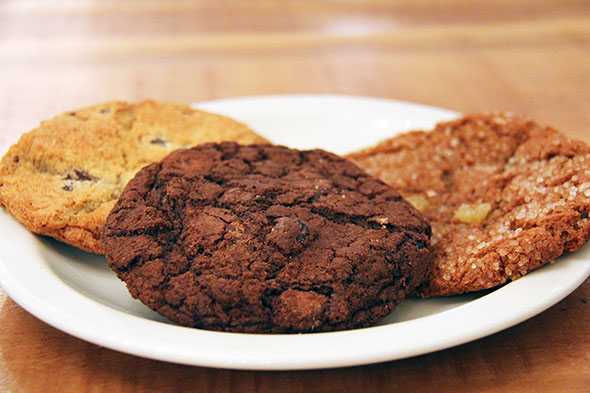 To finish, we pick up some cookies (each just over $2). The sea salt and dark chocolate chip cookie doesn't yield much sea salt, although the double chocolate chai is truly a (and I don't much use this word) game-changer, thanks to its strong chai flavours and scatter of sour cherries. We also try a ginger molasses cookie, which is so moist that it falls apart in the bag (not a bad sign in my books).

Also on offer at Black Rabbit are juices by Joyous Health ($6.95), and their proprietary blends of organic coffee (roasted in Southern Ontario using Bullfrog Power , and lattes offered with housemade organic almond milk). They also serve tea and smoothies, and can accommodate gluten-free or vegan diets.