Belly Buster Submarines has been serving enormous subs for over 45 years.

Open until 3:30 am on weekends and 2:30 am on weekdays, their sandwiches are still as sloppy, affordable and filling as they have been since customers used to stumble in after long nights at the old Miller Tavern (where they once sold beer from trays for just cents). 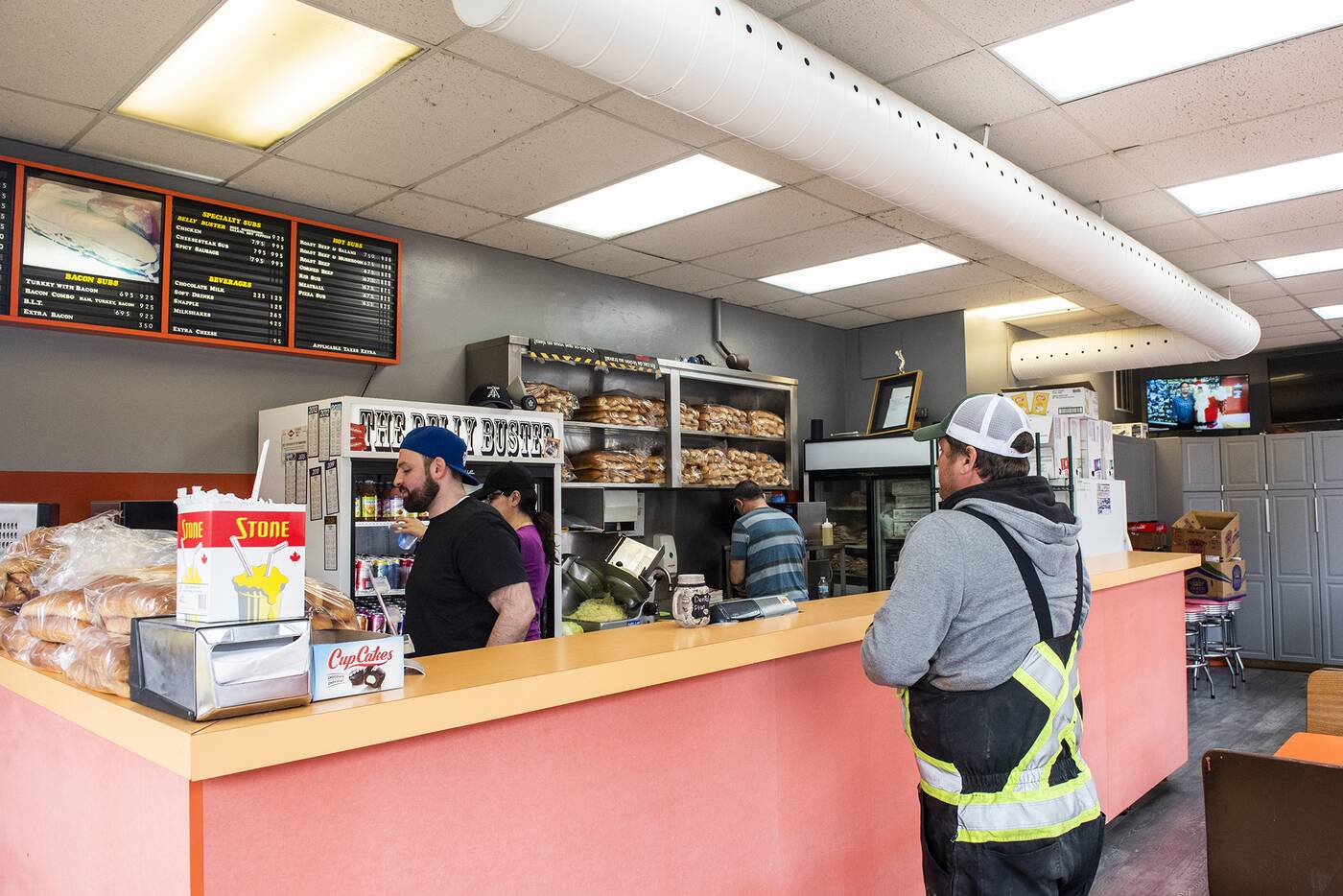 The space feels as though it hasn’t changed too much over all that time, save a few TVs at the back, albeit playing slideshows of retro photos. The menu was apparently once even more old school than it is now, a light board with mismatched lettering. Scant seating is provided by four booths. 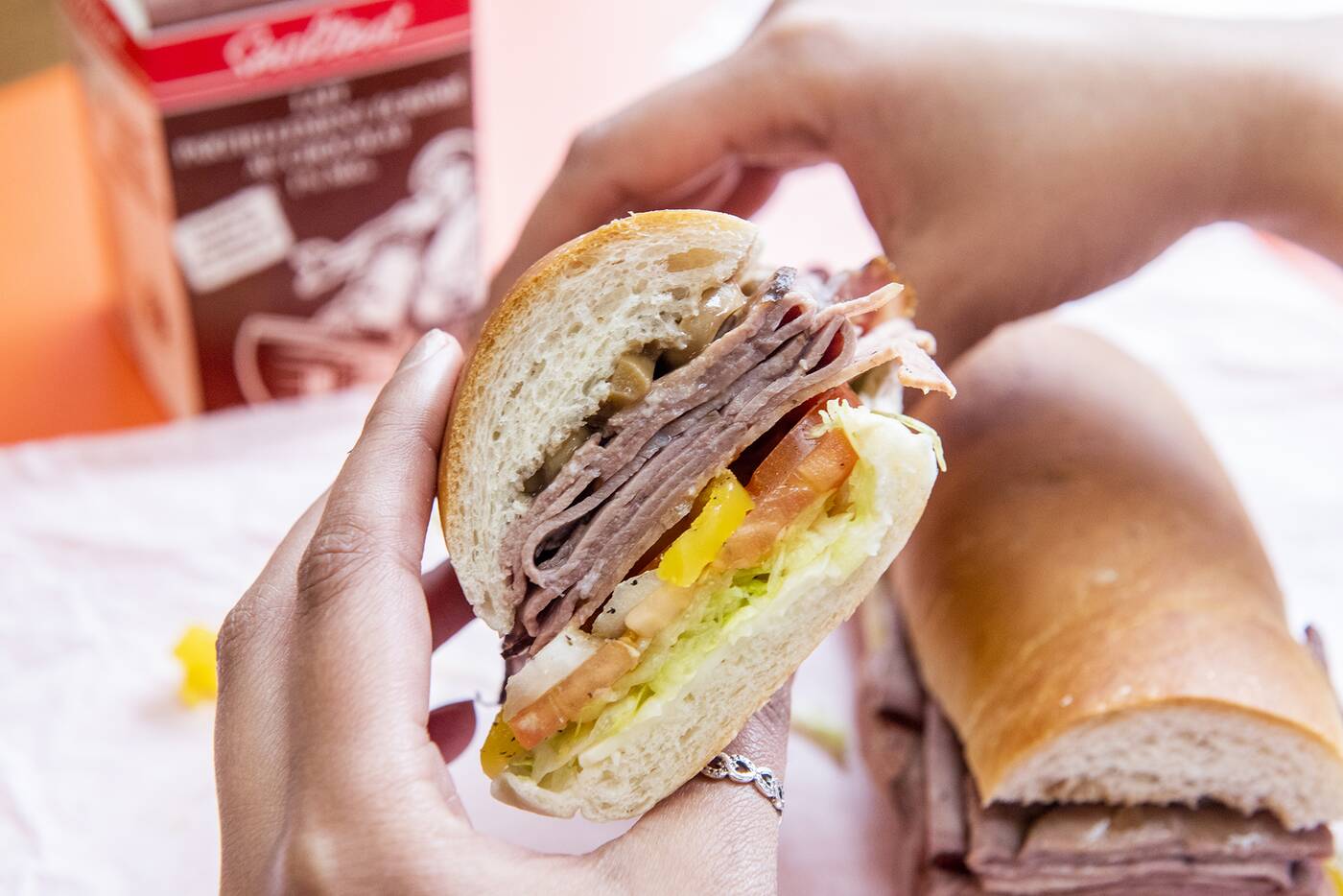 The Belly Buster ($9.25) is obviously the nominal signature sub, a hearty combination of roast beef and salami topped with mushrooms and gravy that’s best warmed up. 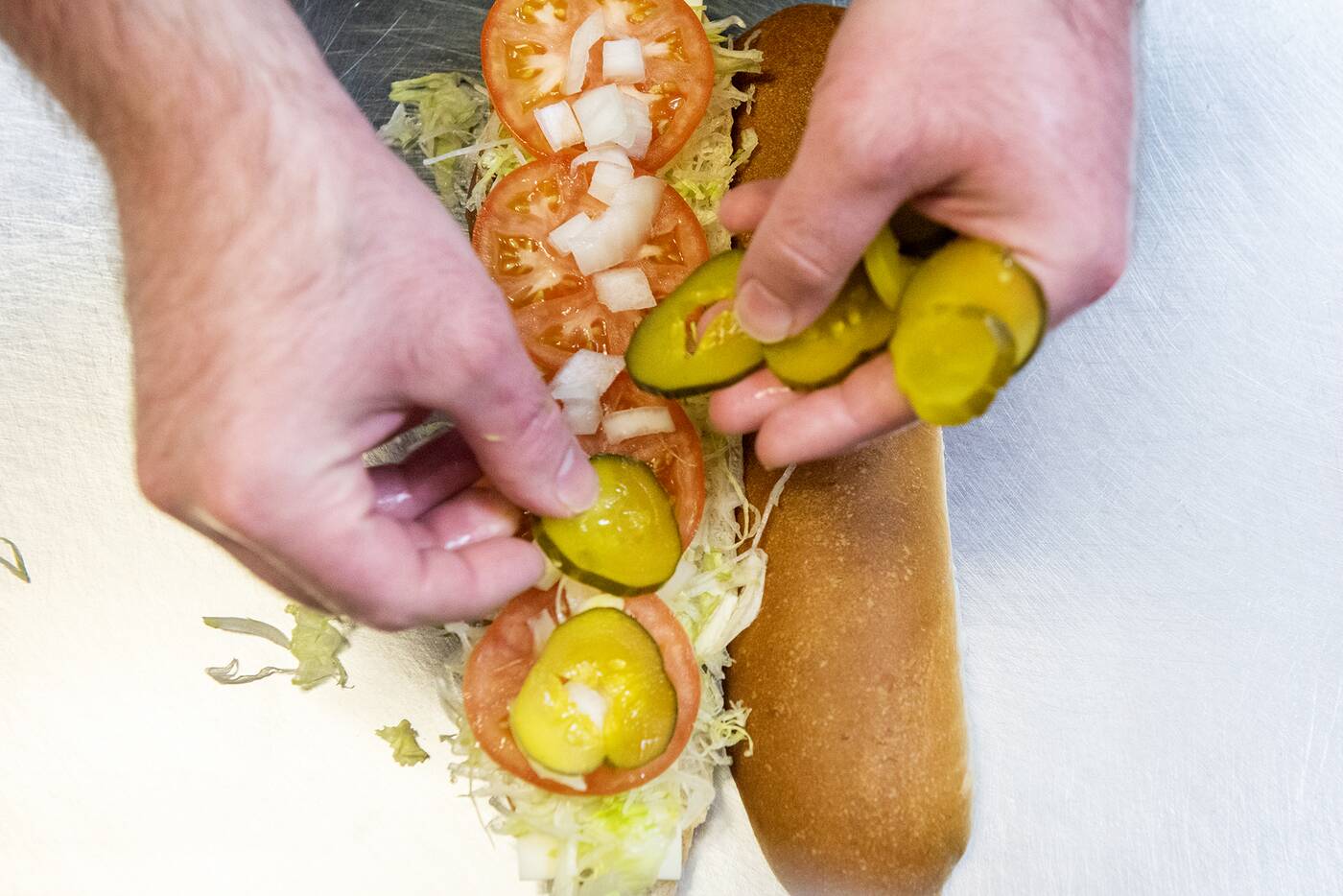 They always ask if you want cheese, lettuce, tomato and onion first, then olives, pickles and hot peppers, then finally your preference on oily sub sauce, mustard and mayo. 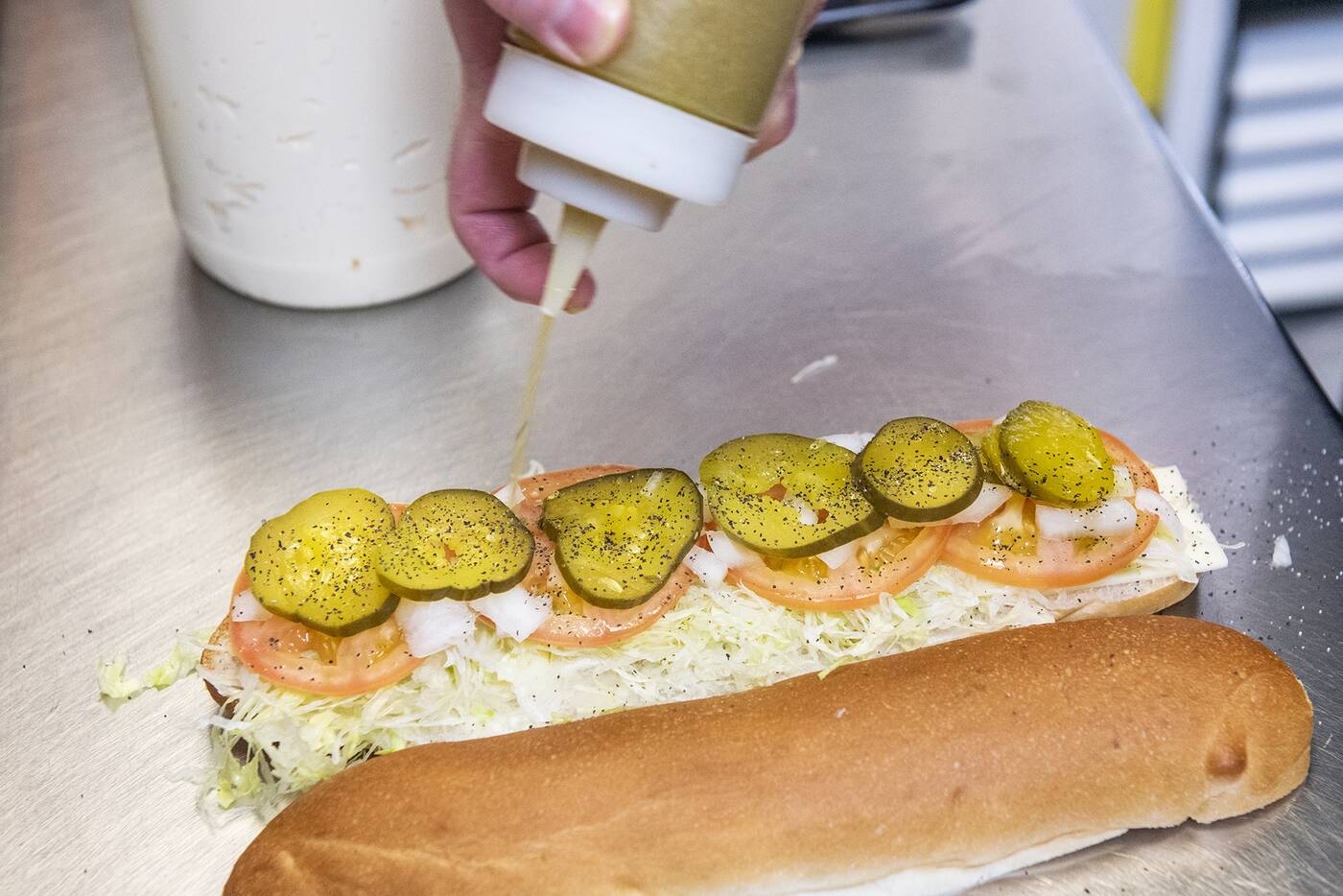 There are more toppings available at the King West location and over the years they’ve added some extras like cucumber and green pepper, though at this location there’s less demand for novelty and more reverence for the classics. 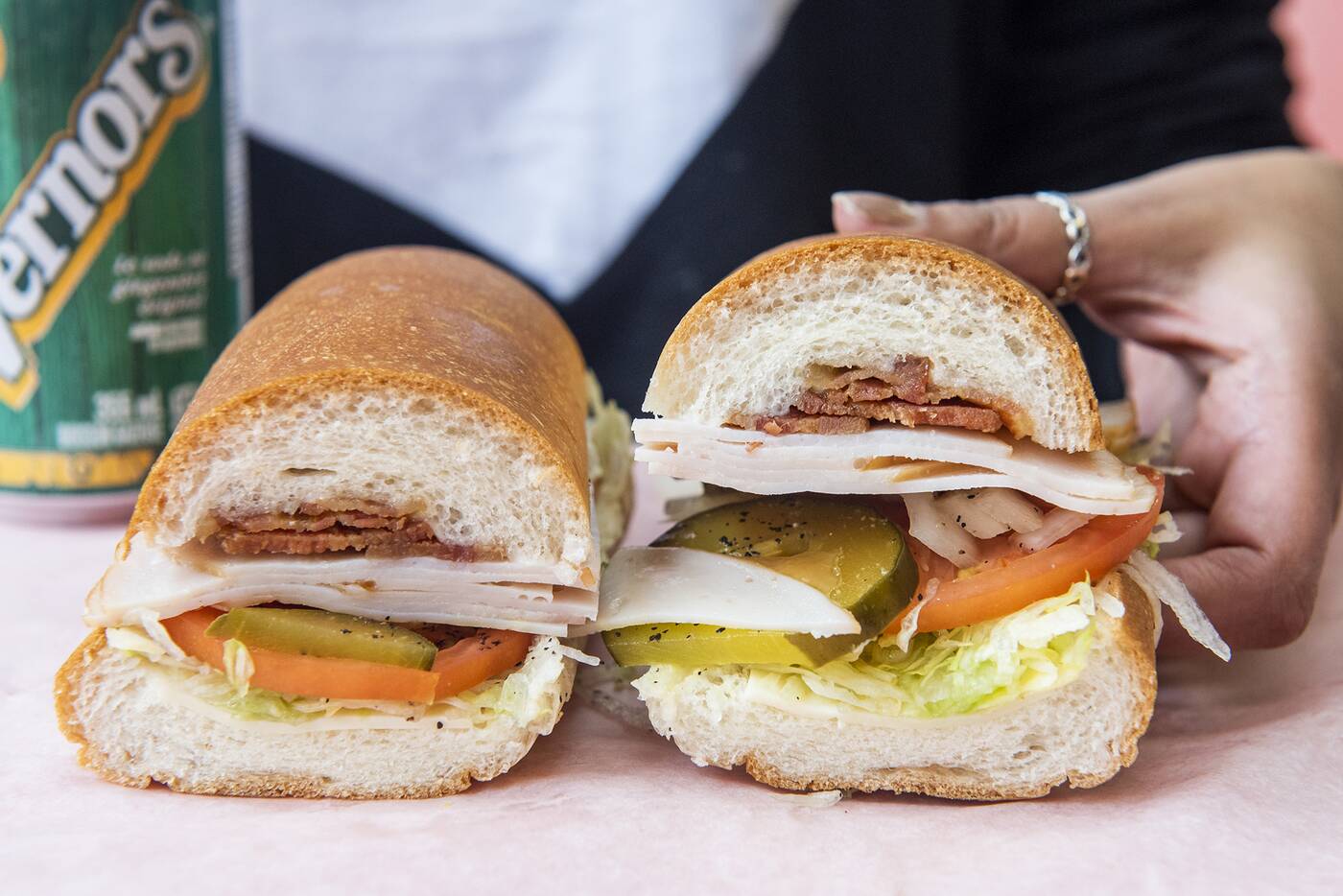 Classics like the turkey bacon ($9.25), made with kosher turkey and a generous portion of smoky, crispy local Cherry Pink bacon from Beamsville, the salami in the Belly Buster actually from the same producer. 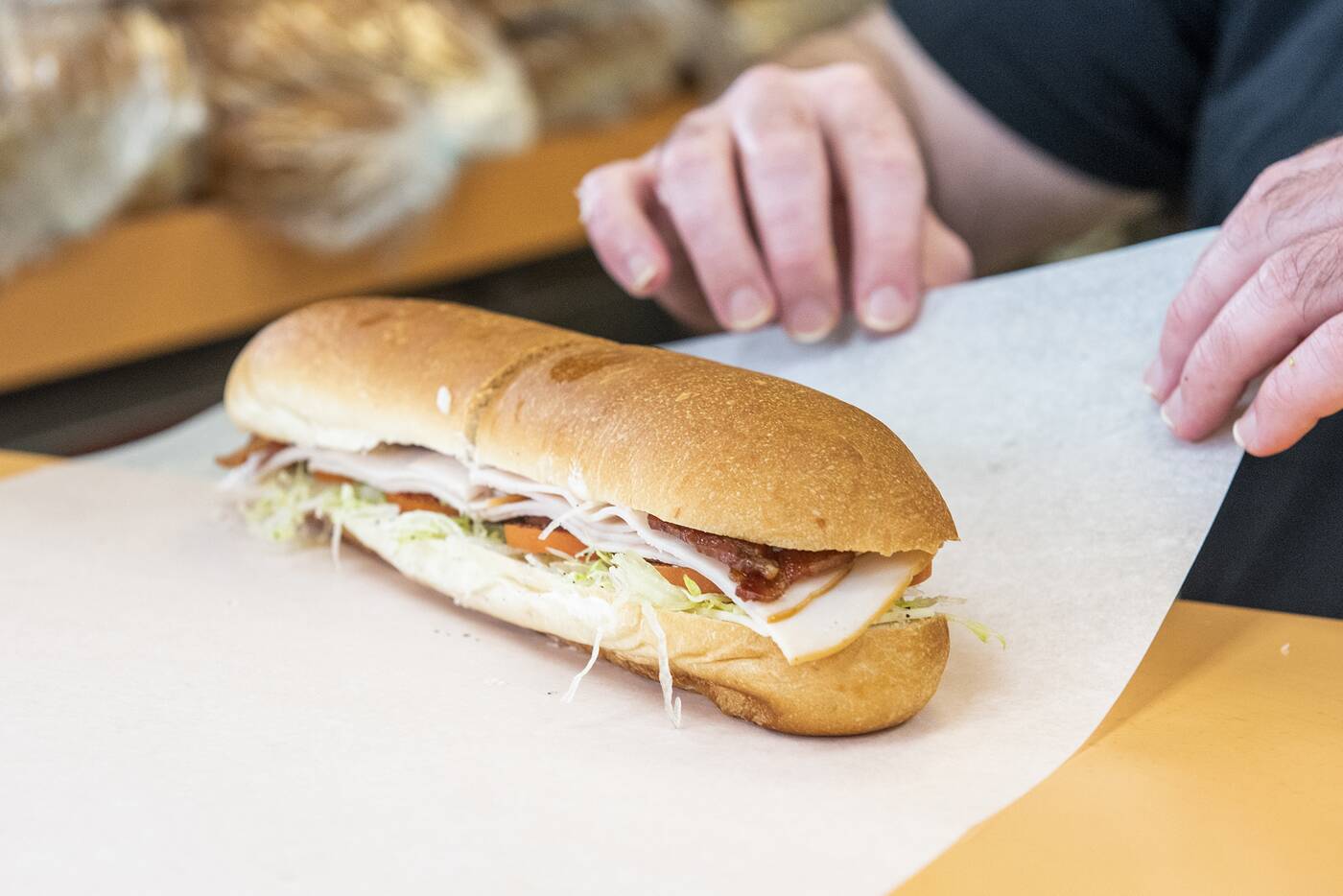 Sturdy white and whole wheat foot-long sub buns are delivered daily by Toronto Bread Company, crispy outside and spongy inside. 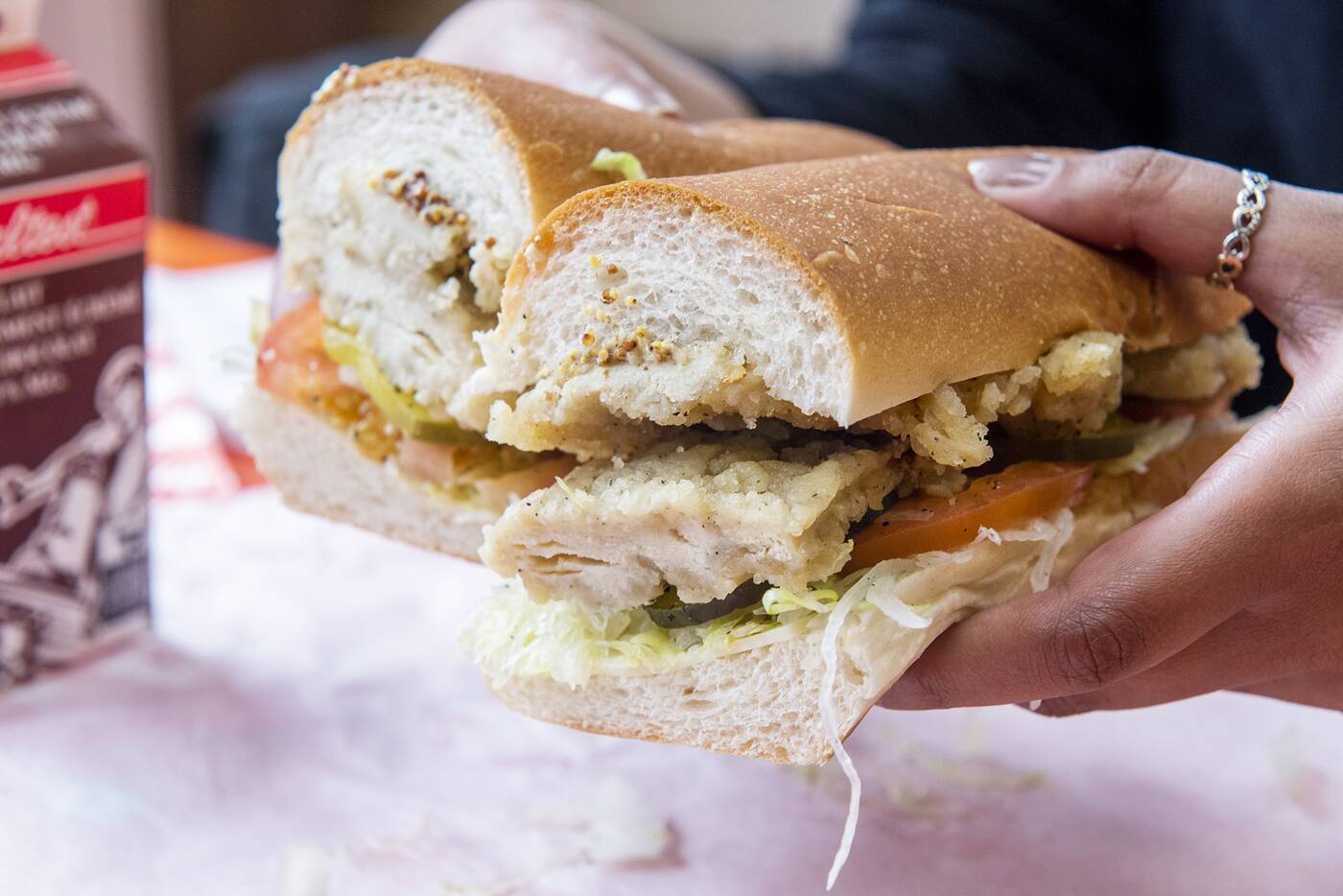 A chicken sub goes for $9.95, packed with breaded chicken cutlets. 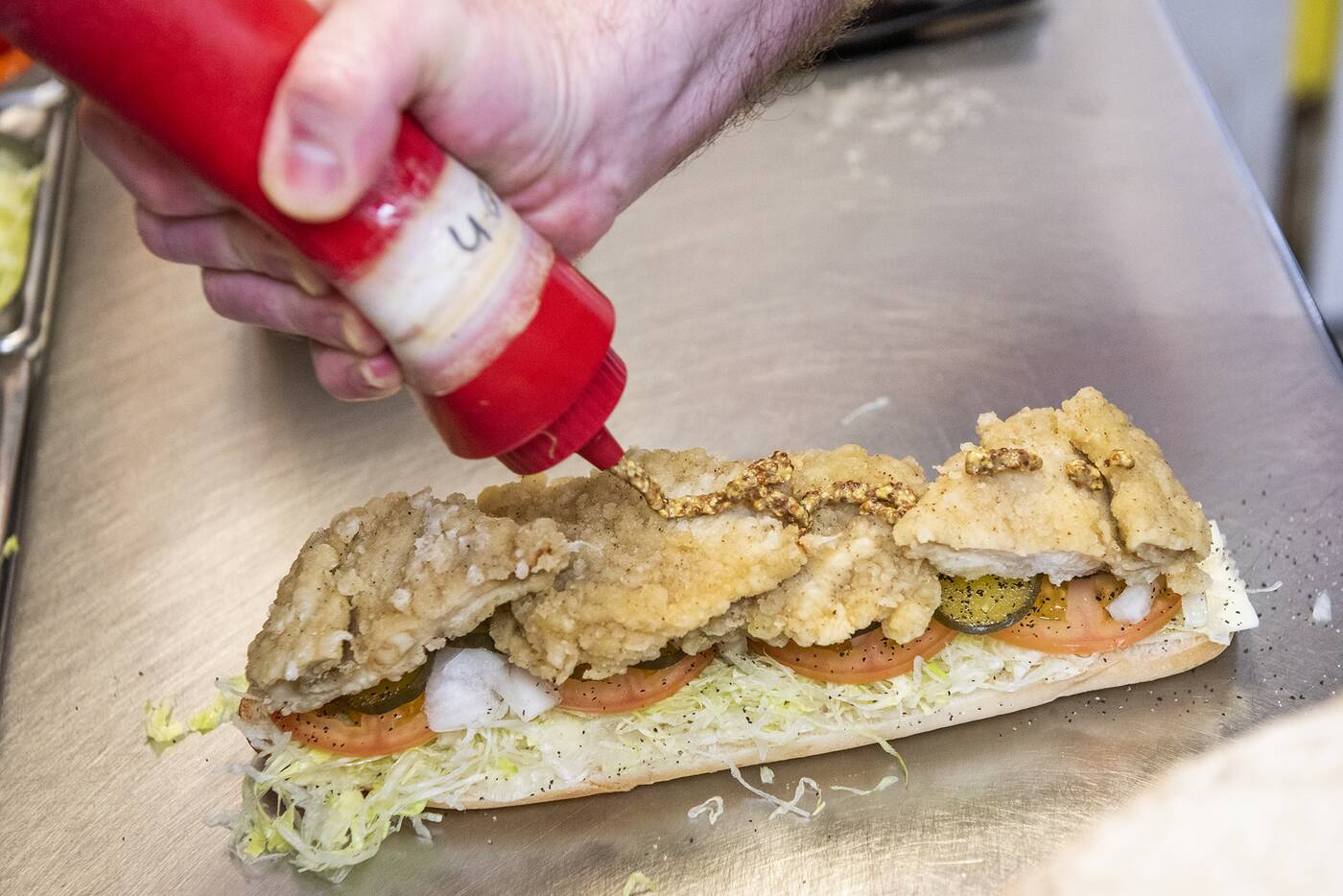 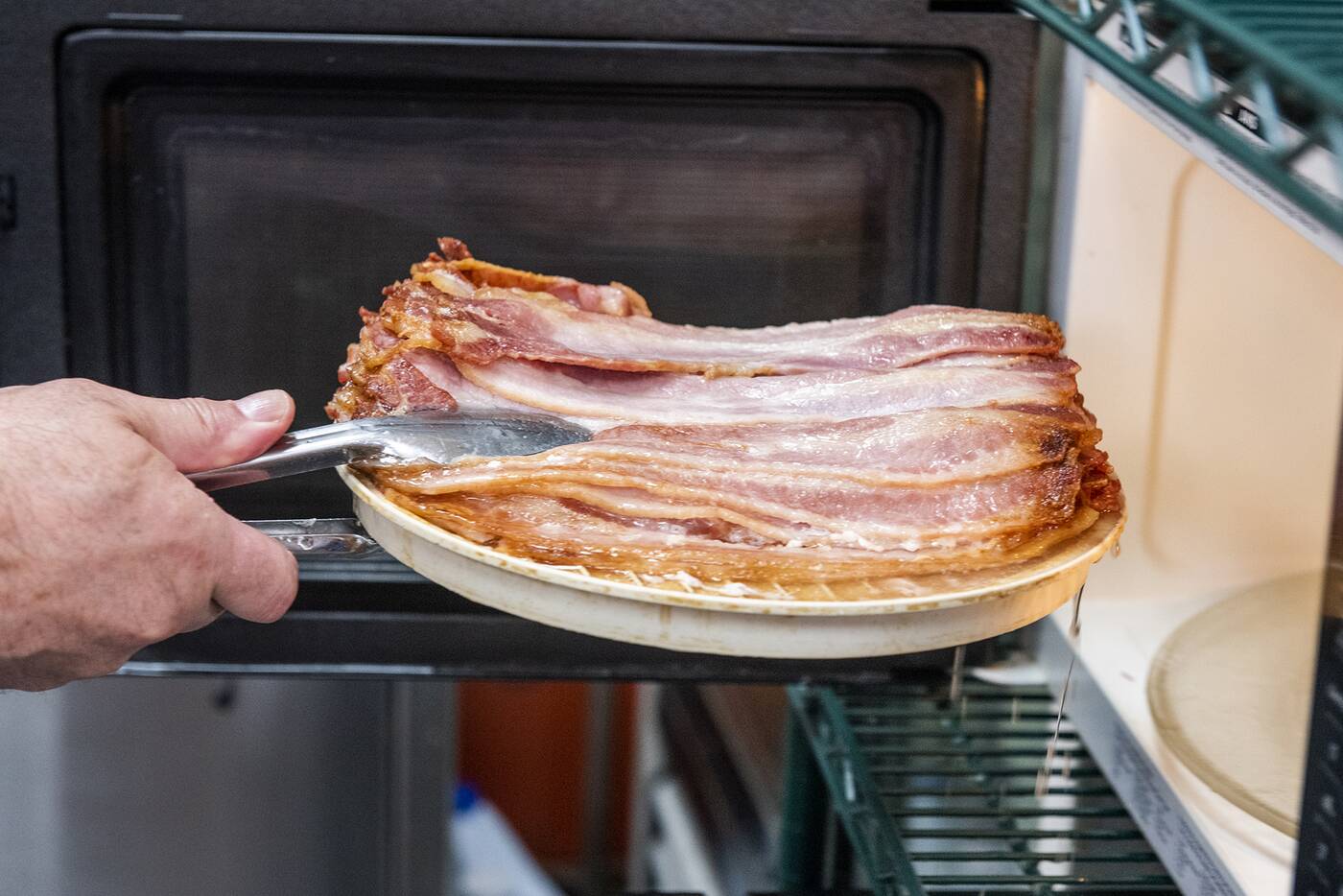 These, the bacon and the Belly Buster are all cooked in microwaves right behind the counter. They actually go through about 40 or 50 five-kilo cases of bacon a week here.

That and a single deli slicer are the two main pieces of equipment here, the slicer used for everything including fresh lettuce that’s shredded into delightfully thin ribbons. 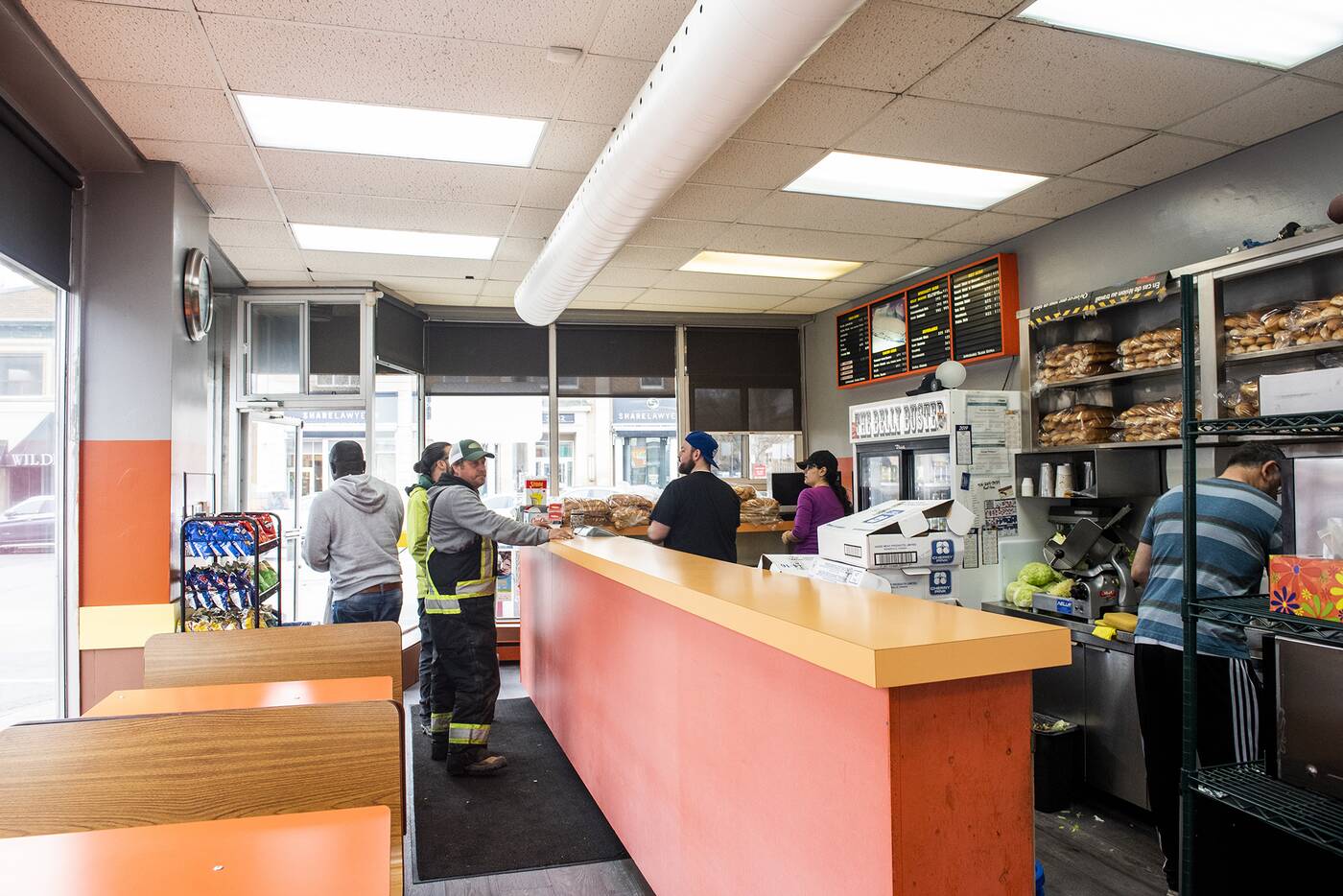 Belly Buster Submarines is a family business that’s been passed down through generations over the years. It’s easy to see how they’ve managed to stay around with such long hours and high quality ingredients that unlike some sub shops are prepped fresh every single day. 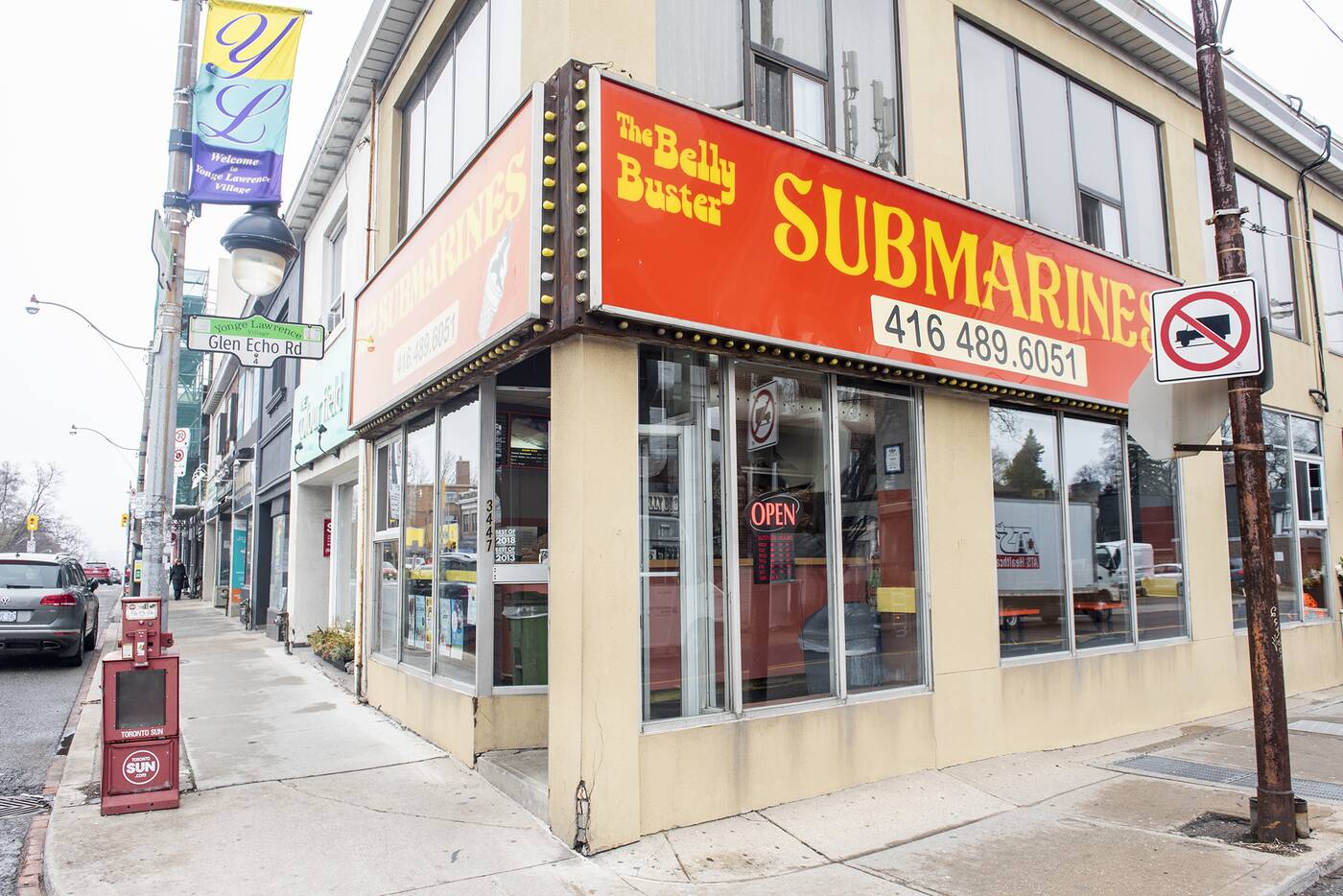