Beertown Public House in Toronto is the place for beer lovers. A tap list of 40 static and rotational beers includes local favourites like Blood Brothers and Left Field as well as craft beer from small towns in Ontario, such as Elora Brewing Company.

There's even more beer in bottles including a selection from their bottle shop that can be purchased to take home. 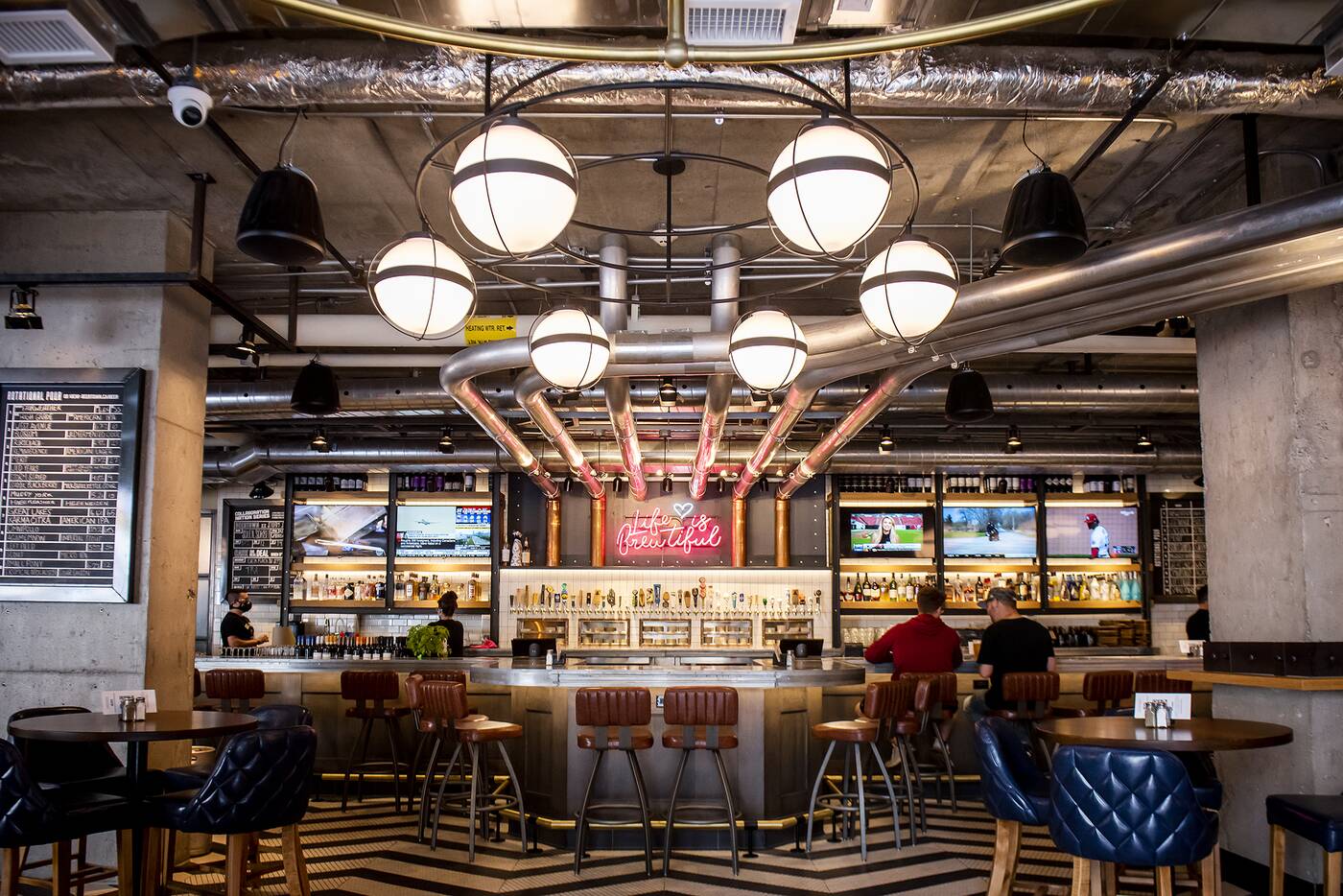 This Beertown on the edges of the Entertainment District at the corner of Wellington and University Avenue is the chain's newest location. The company first opened in Cambridge, Ont. back in 2012.

Over the last decade, owner Jody Palubiski has expanded Beertown to several other cities including Barrie, Burlington, Oakville and London. 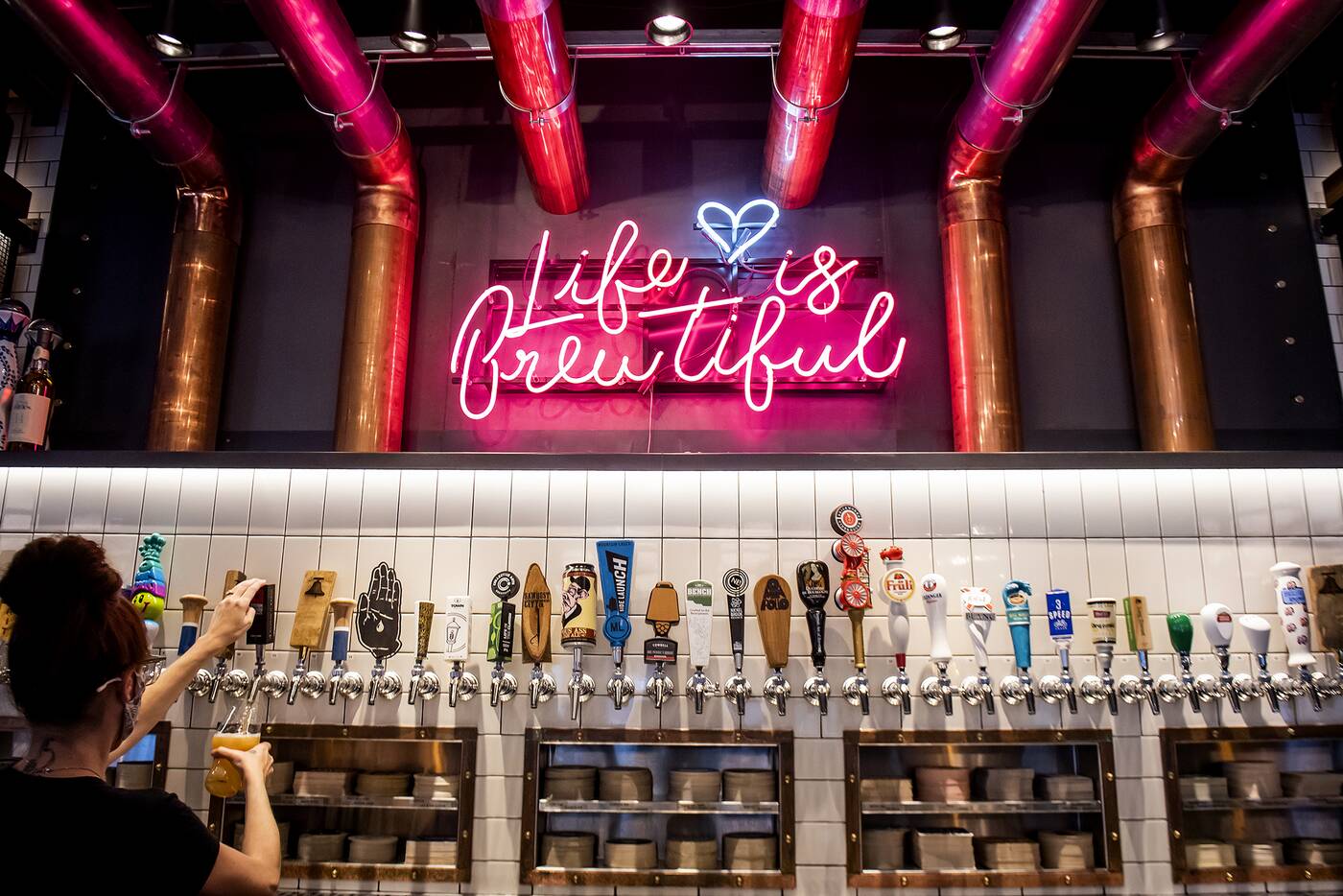 Palubiski knows this area in Toronto well. He used to be the general manager for Loose Moose just a few blocks away. Over the years, he learned the ins and outs of the hospitality industry at Financial District stalwarts Jump, Canoe and Biff's Bistro.

Beertown Toronto seems like the kind of place that would be popular for the after-work crowd once people return to office buildings in the area. 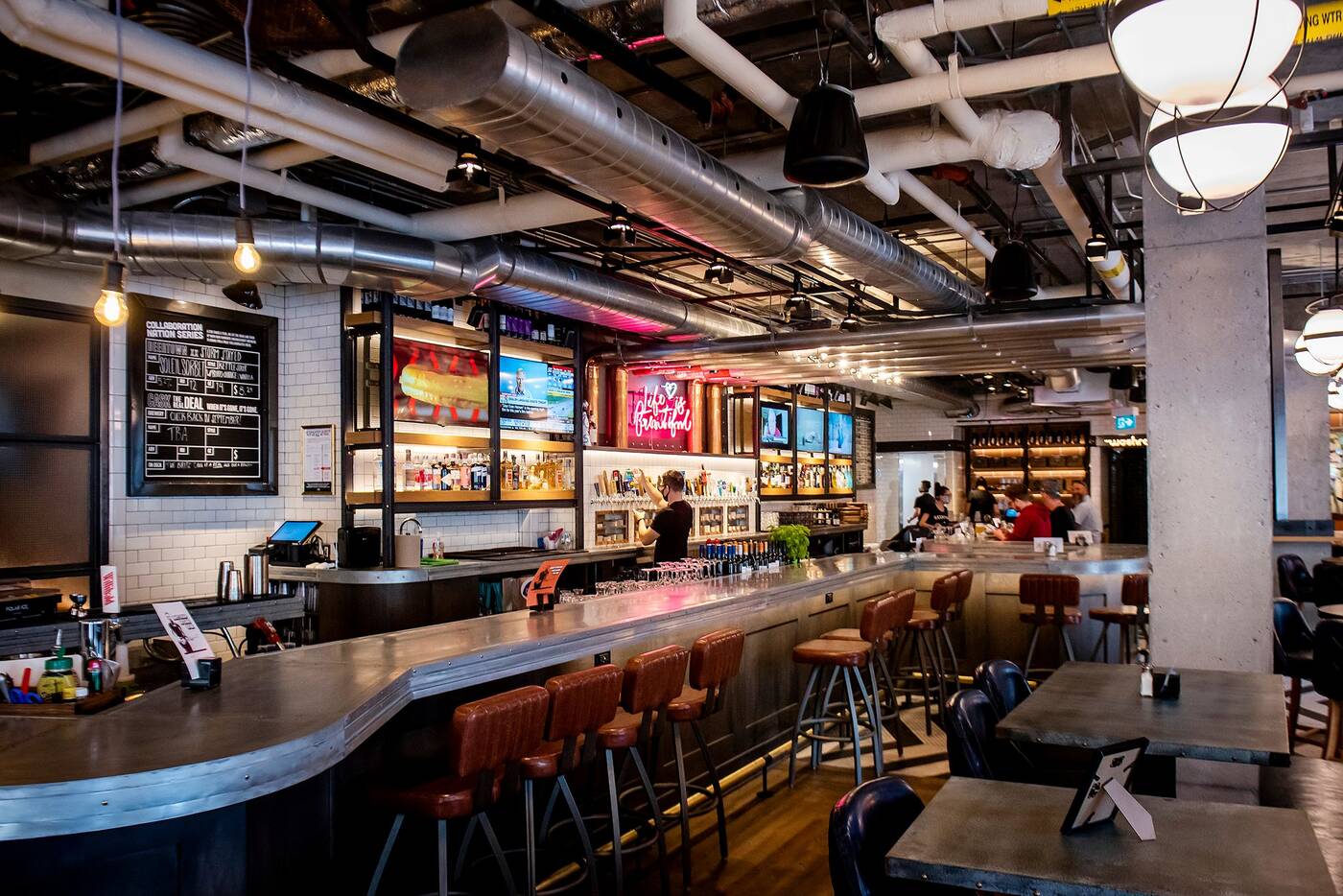 The large space features several flat screens and a wrap around bar so there's plenty of space to hang out to watch the game. It's also located down the road from Union Station, so I can imagine commuters stopping-by here for a drink or dinner before the train ride home.

There's a main menu at Beertown, along with two separate ones that both have plant-based and gluten friendly versions of each dish. 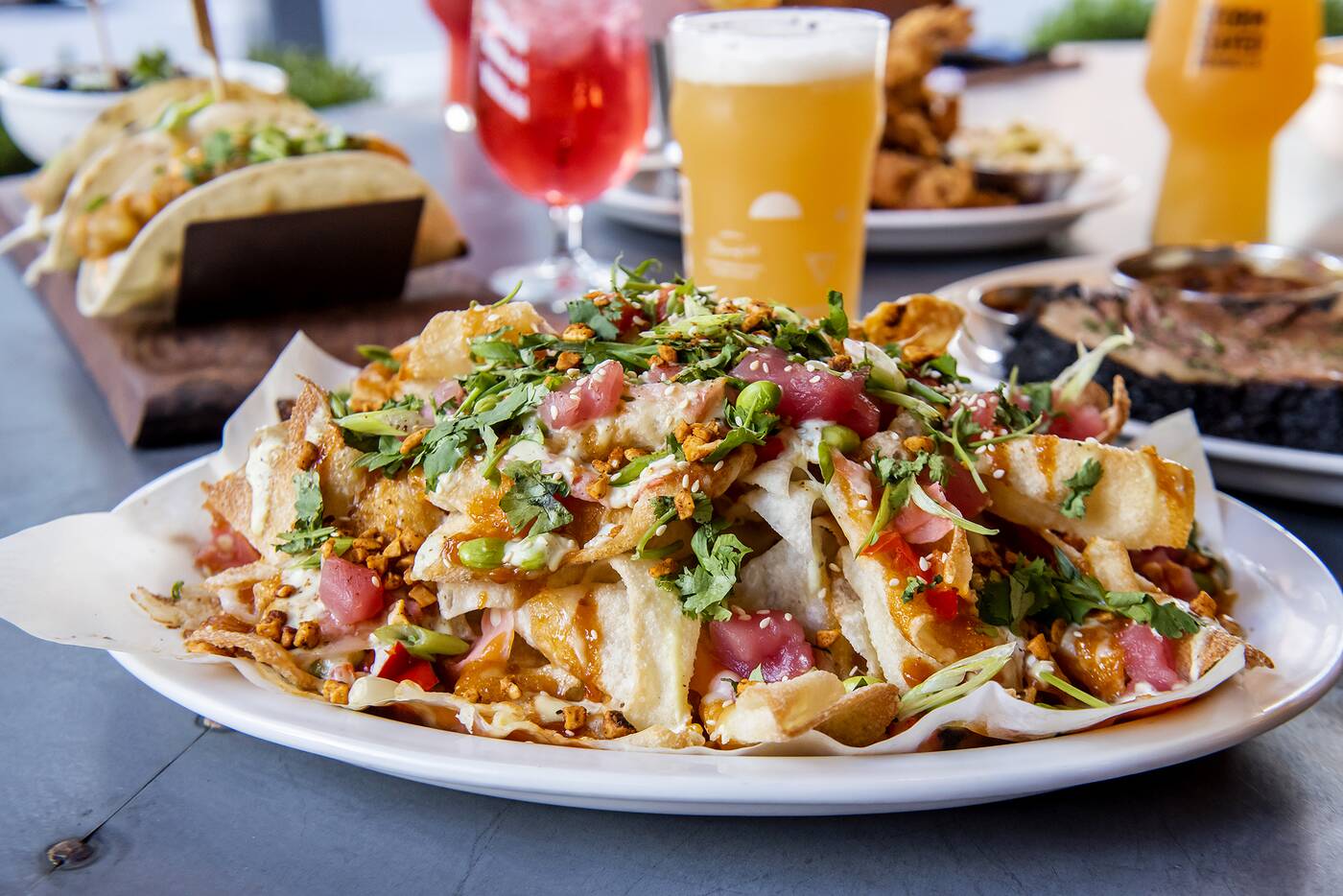 The Wonton Nachos is a good-sized starter for sharing between friends.  The regular version starts at $16.99, Adding chicken to the nachos brings the price to $20.99, or splurge for the sashimi tuna version for $23.99. 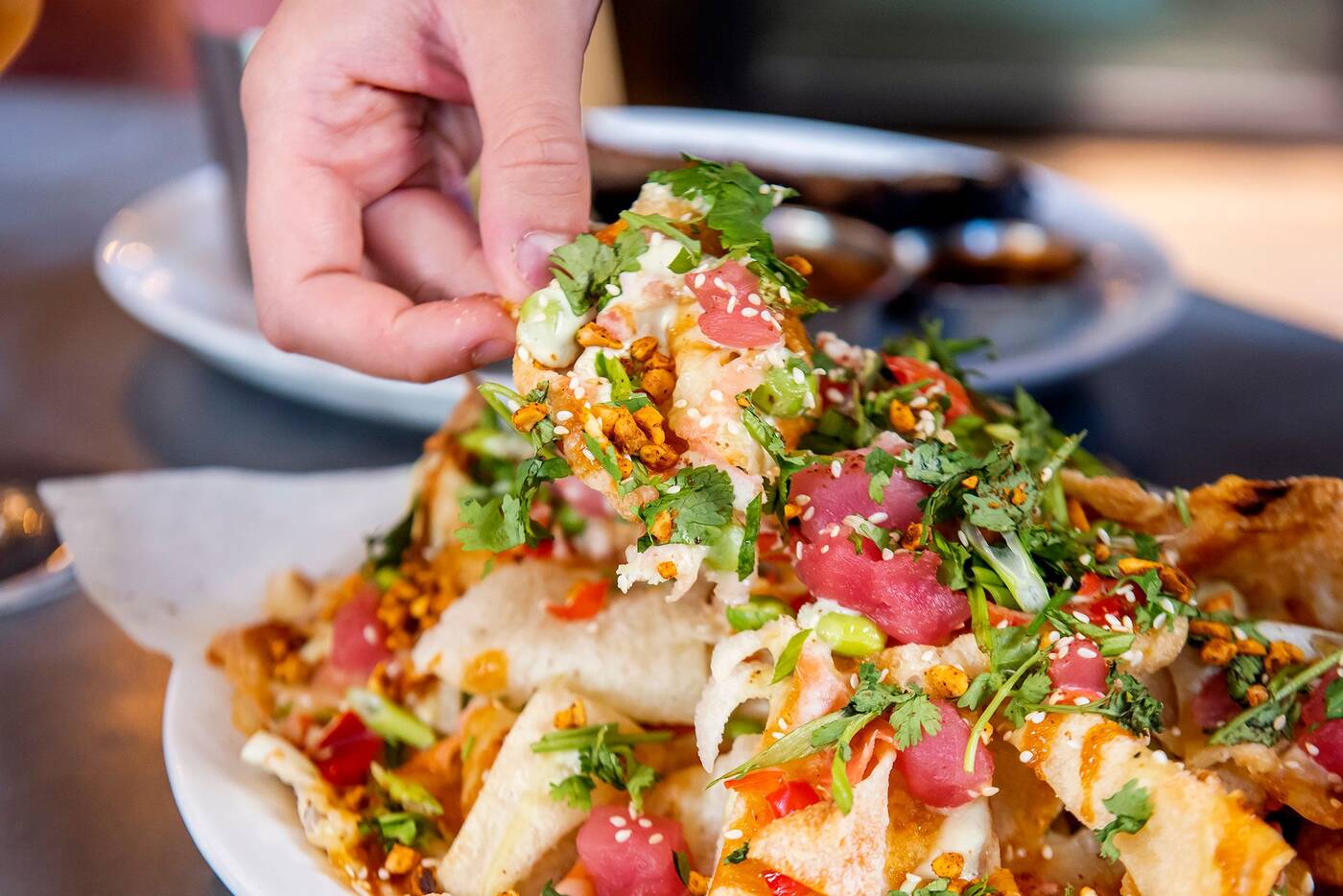 Don't expect there to be much of a cheesy pull on these. Mozzarella and fontina cheeses are sprinkled on combined with edamame, pickled ginger, red peppers and cilantro, then lightly baked in a Merrychef oven.

I really liked the wasabi sour cream and thai peanut sauce drizzled on top of the chips. It was so addictive I couldn't resist reaching back for more. 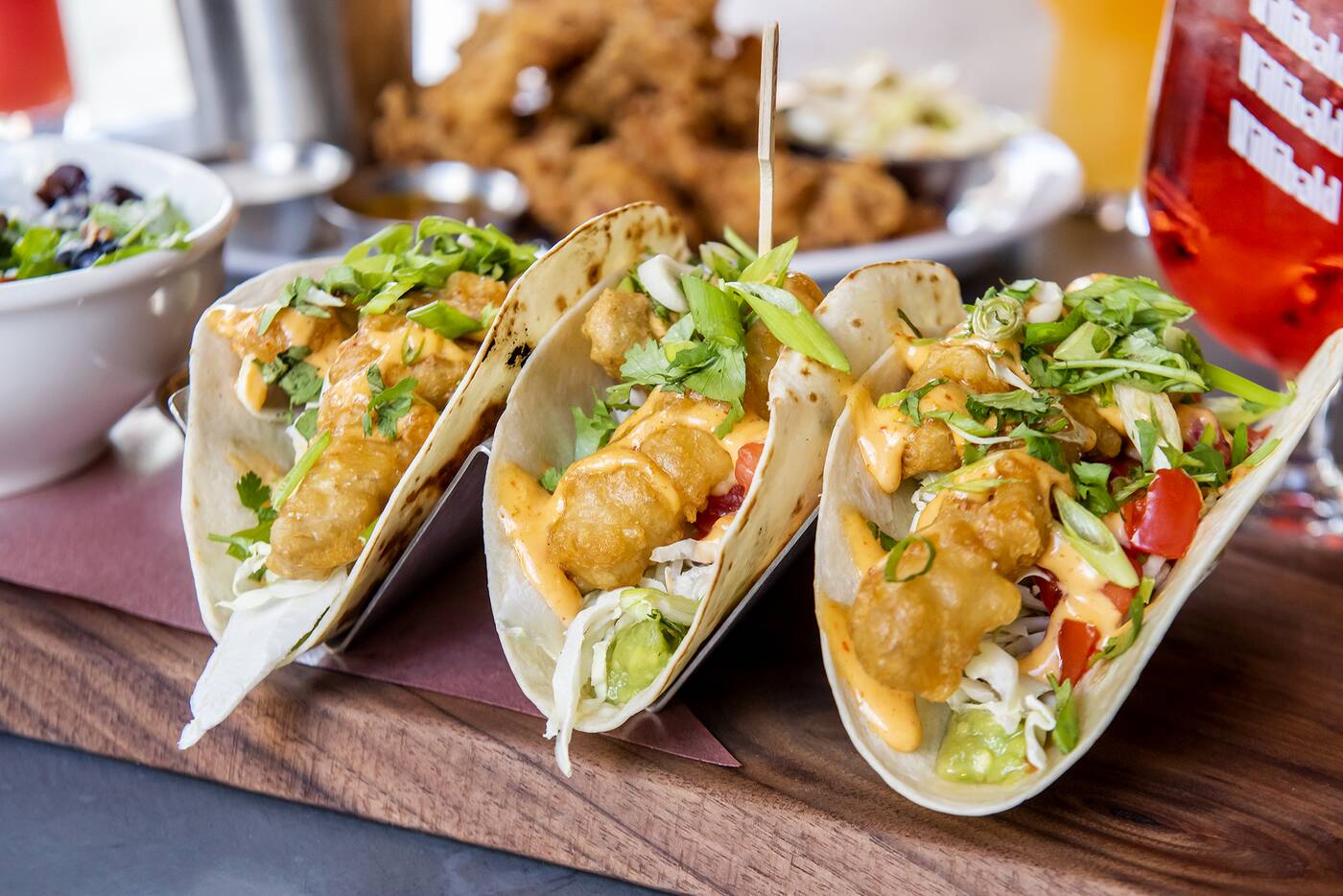 The  3-piece Faux Tacos ($17.99) is a plant-based version of their tacos that also comes in pairs of two ($12.49). It's a bit pricey for what you can normally get in the city and far from authentic with flour wraps used instead of traditional corn tortillas. 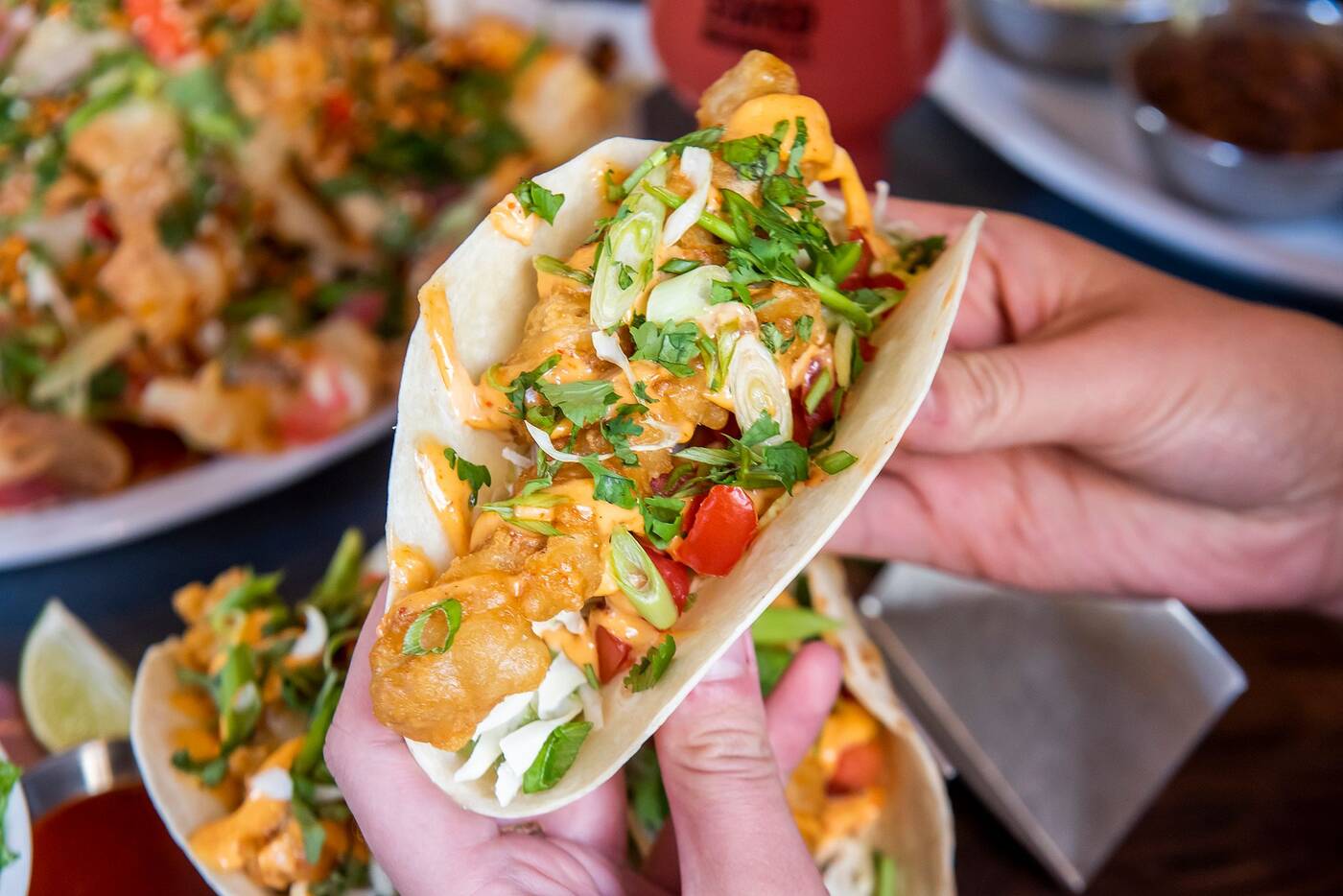 The Southern Fried Chicken ($20.49) is a classic take on a Kentucky Fried Chicken meal deal, without the annoyance of bones or copious amounts of grease.  The boneless chicken is brined in buttermilk before being fried to a crisp. 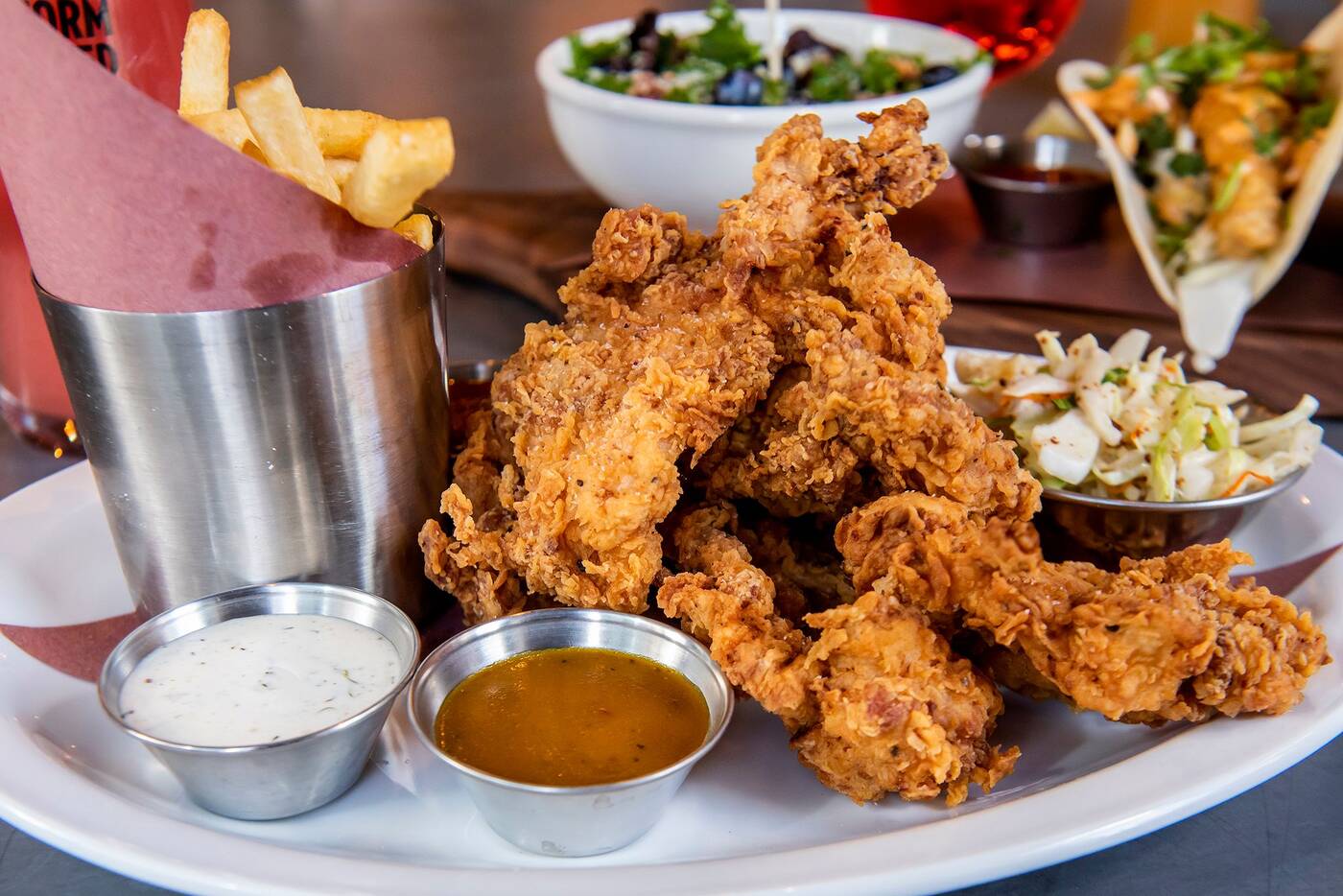 Creamy slider slaw is served on the side along with fresh russet fries, ranch sauce and a carolina mustard.

A signature dish at the restaurant, the BT Brisket Platter ($21.49) has all the fixings for the perfect barbeque spread. 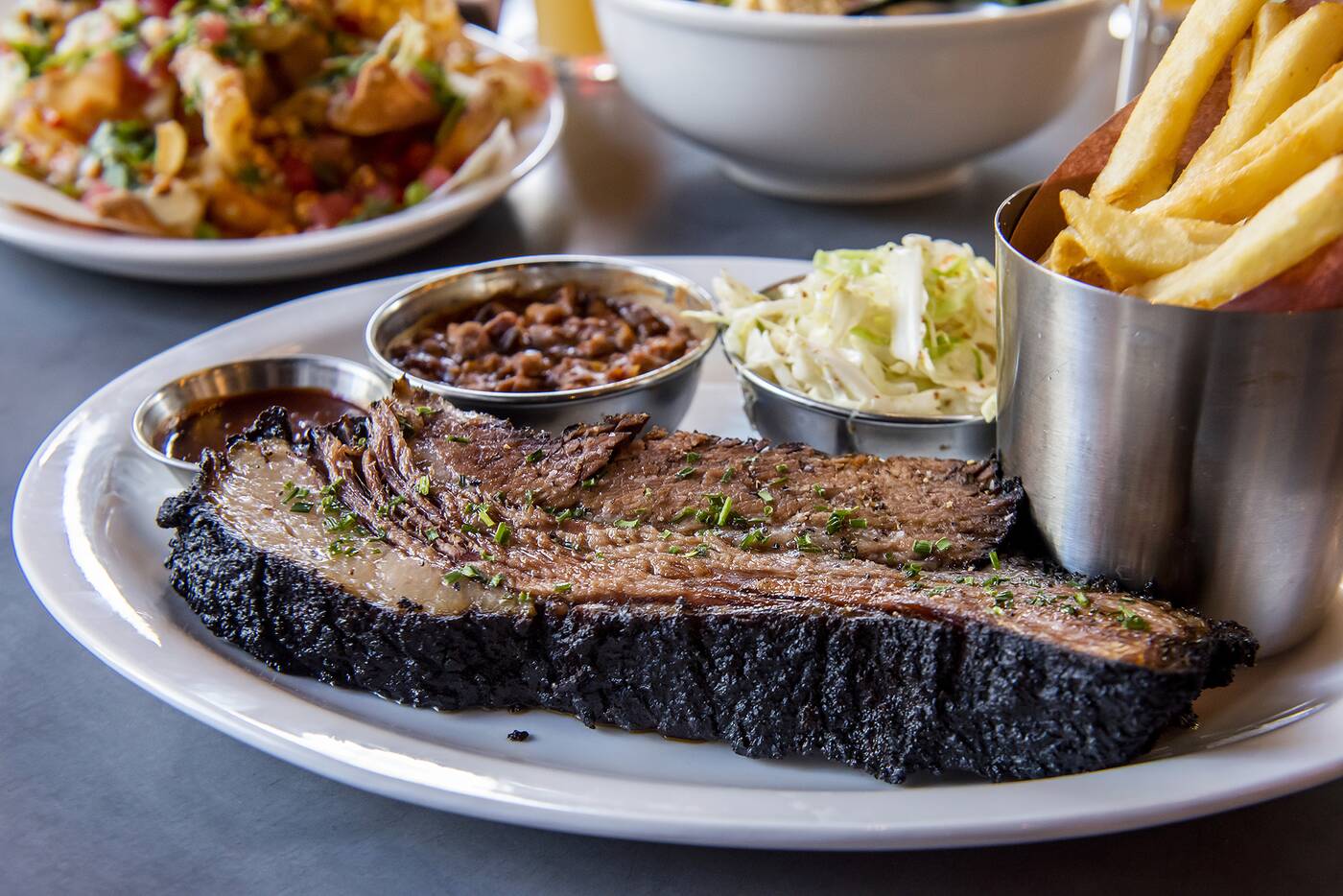 The beef brisket, smoked for 17 hours, is served with a side of baked beans, coleslaw, russet fries and an ancho barbeque sauce that brings out notes of the marinade used on the brisket. 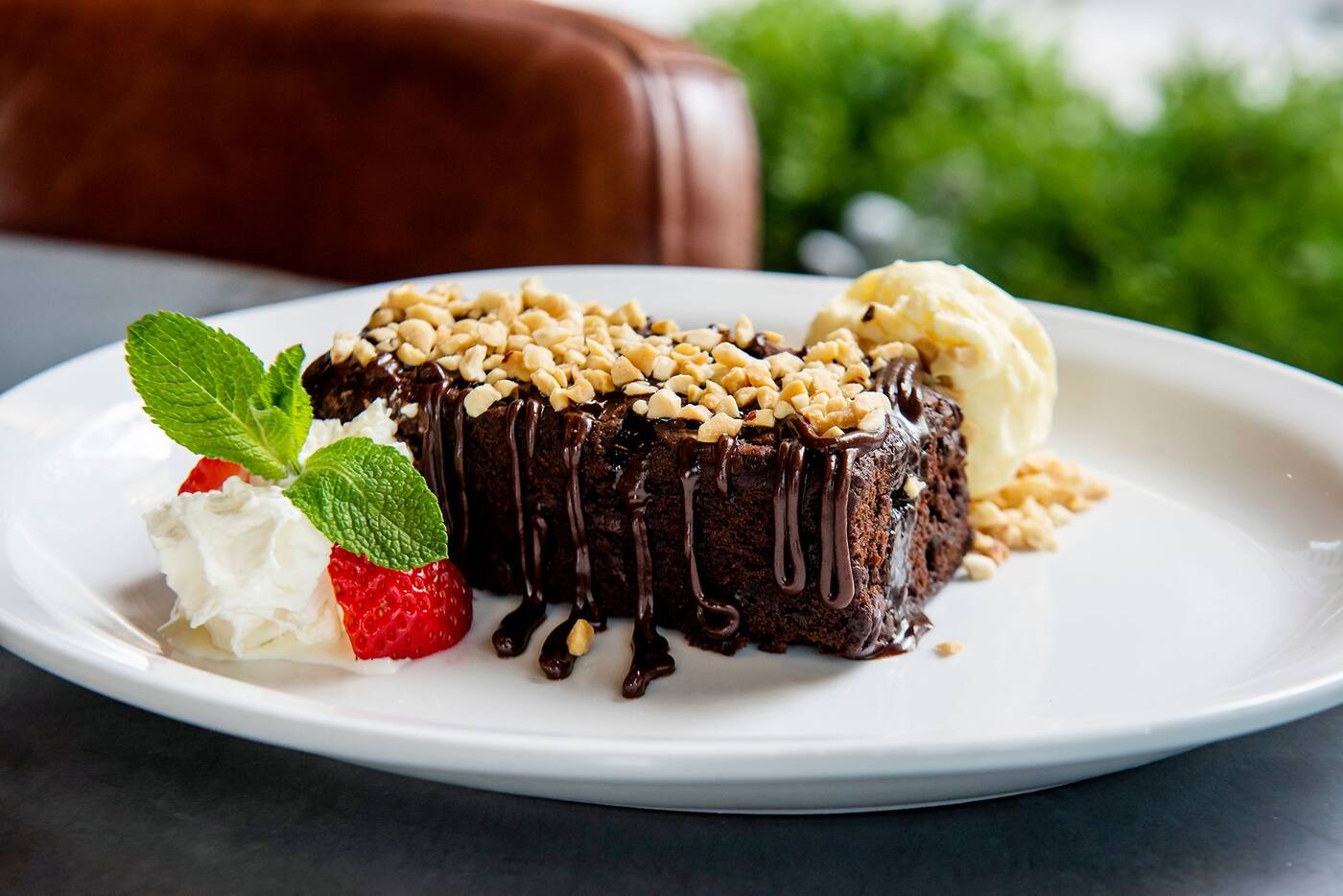 Fudge sauce is doused on top of this gluten-free option, but still maintains a rich chocolate flavour along with toasted peanuts and a scoop of vanilla ice cream. 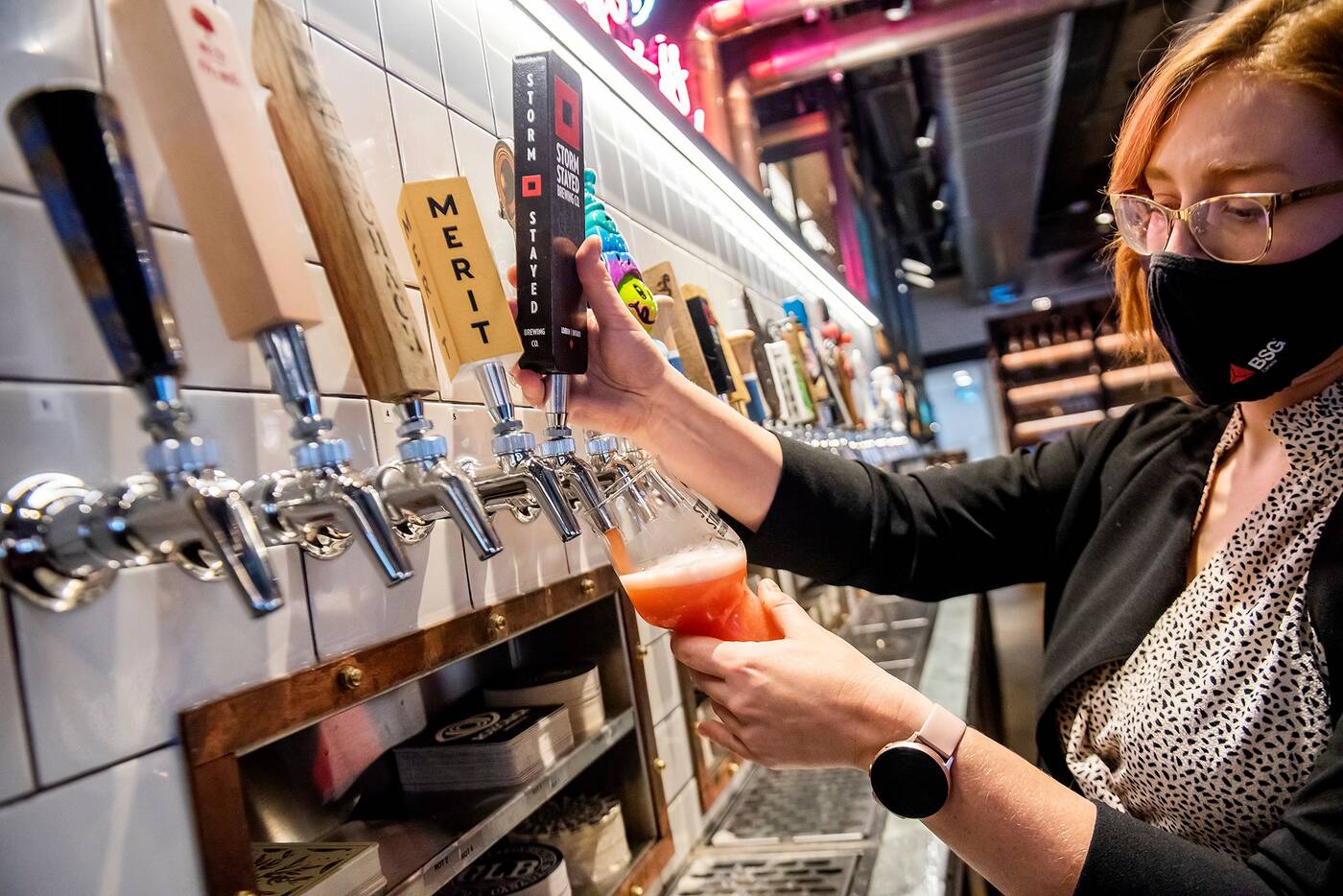 And what about the beer? Many would likely come here just for snacks and some drinks and to try out some brews from Beertown's extensive selection. 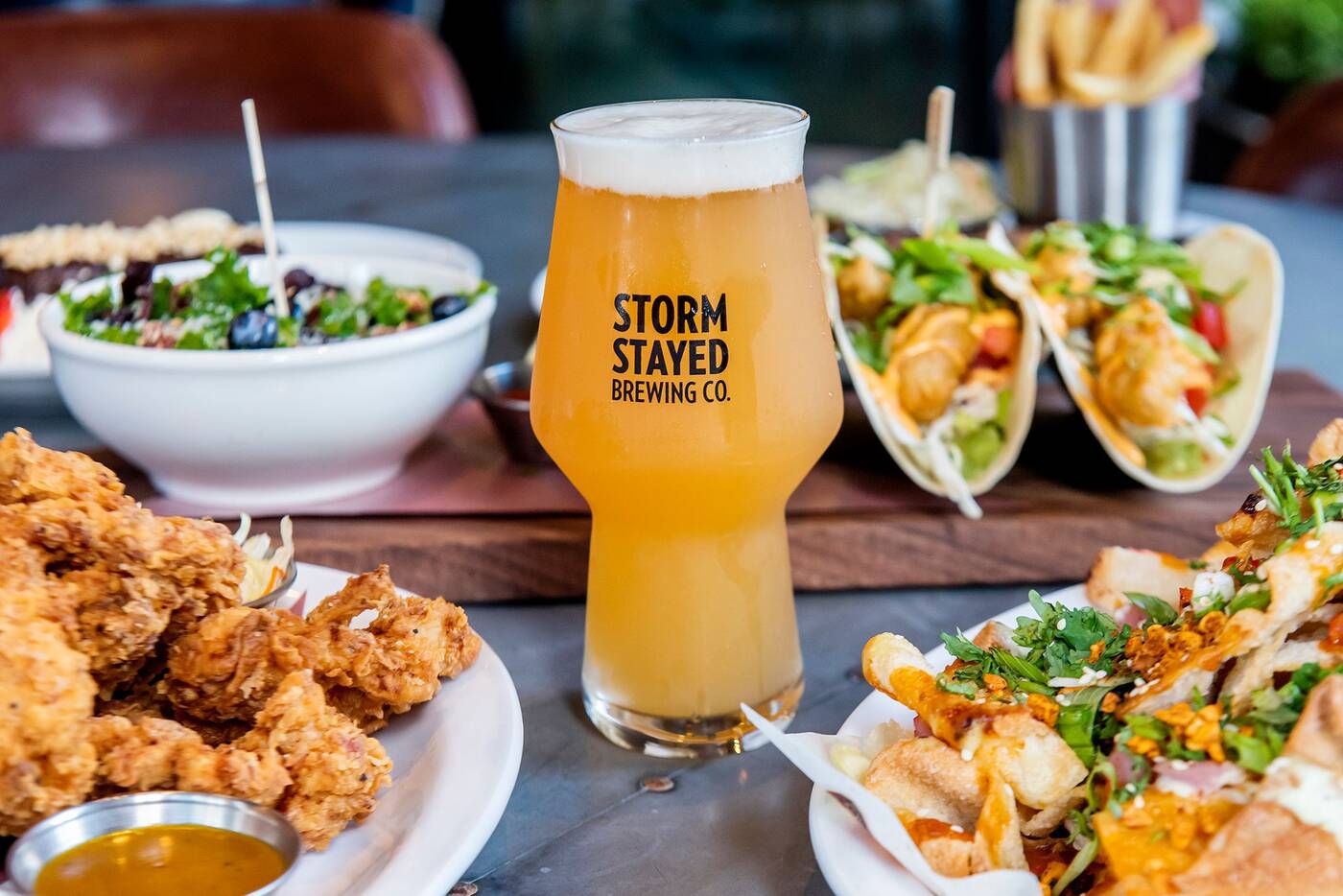 Available on tap, a pint of the Soliel Sorbet ($8.29 -5.2 per cent ABV) from Storm Stayed Brewery has a tropical fizz, flavoured with blood orange and vanilla.

This beer made me feel like I transported to a sunny beach. 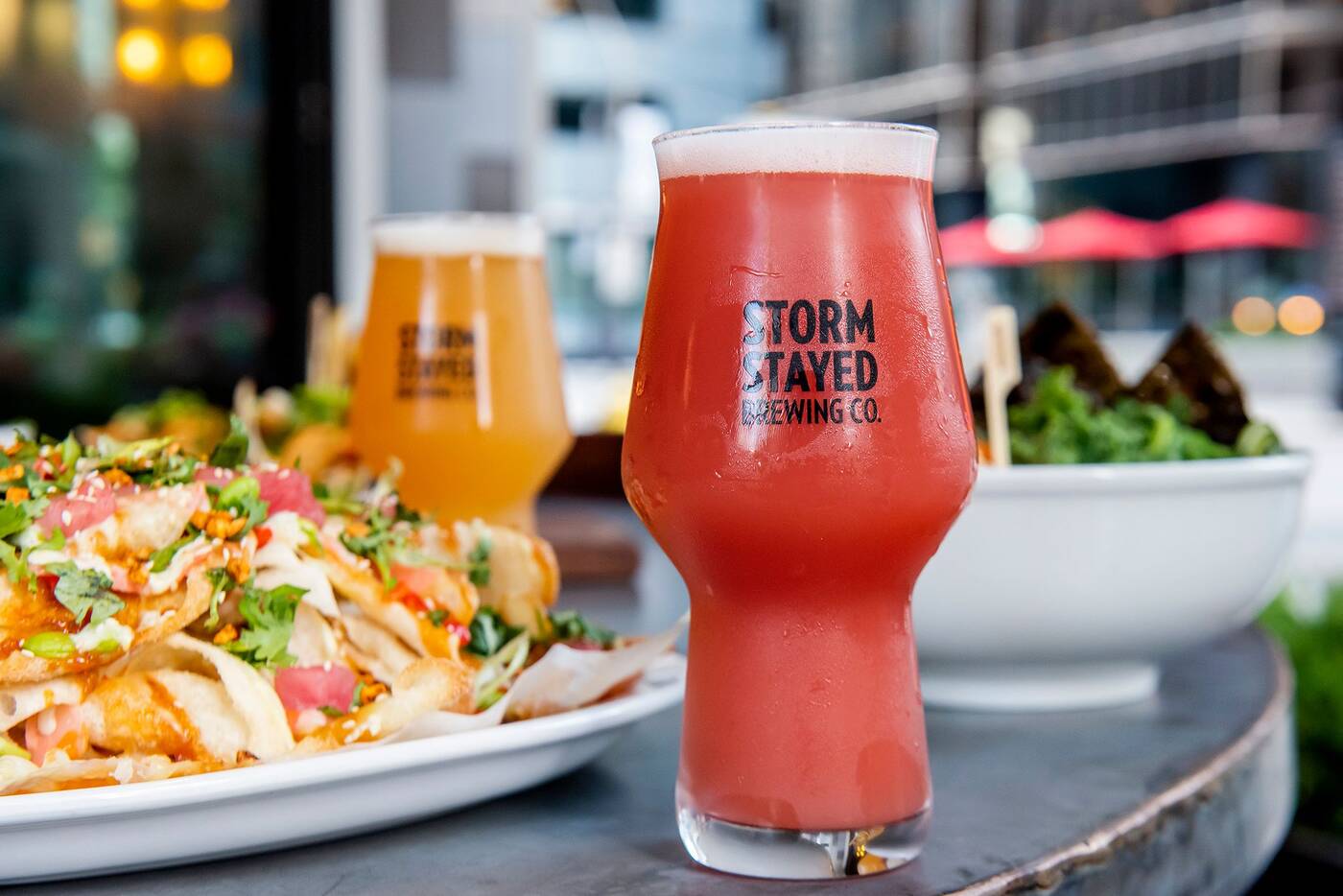 A sweet pint of the Shook: Blackberry ($7.89 - 4.8 per cent ABV) has a vibrant red colour to it. You can really taste the tartiness of the berries.

Not a beer lover? There are cocktails too, although the beer is definitely Beertown's strong suit. 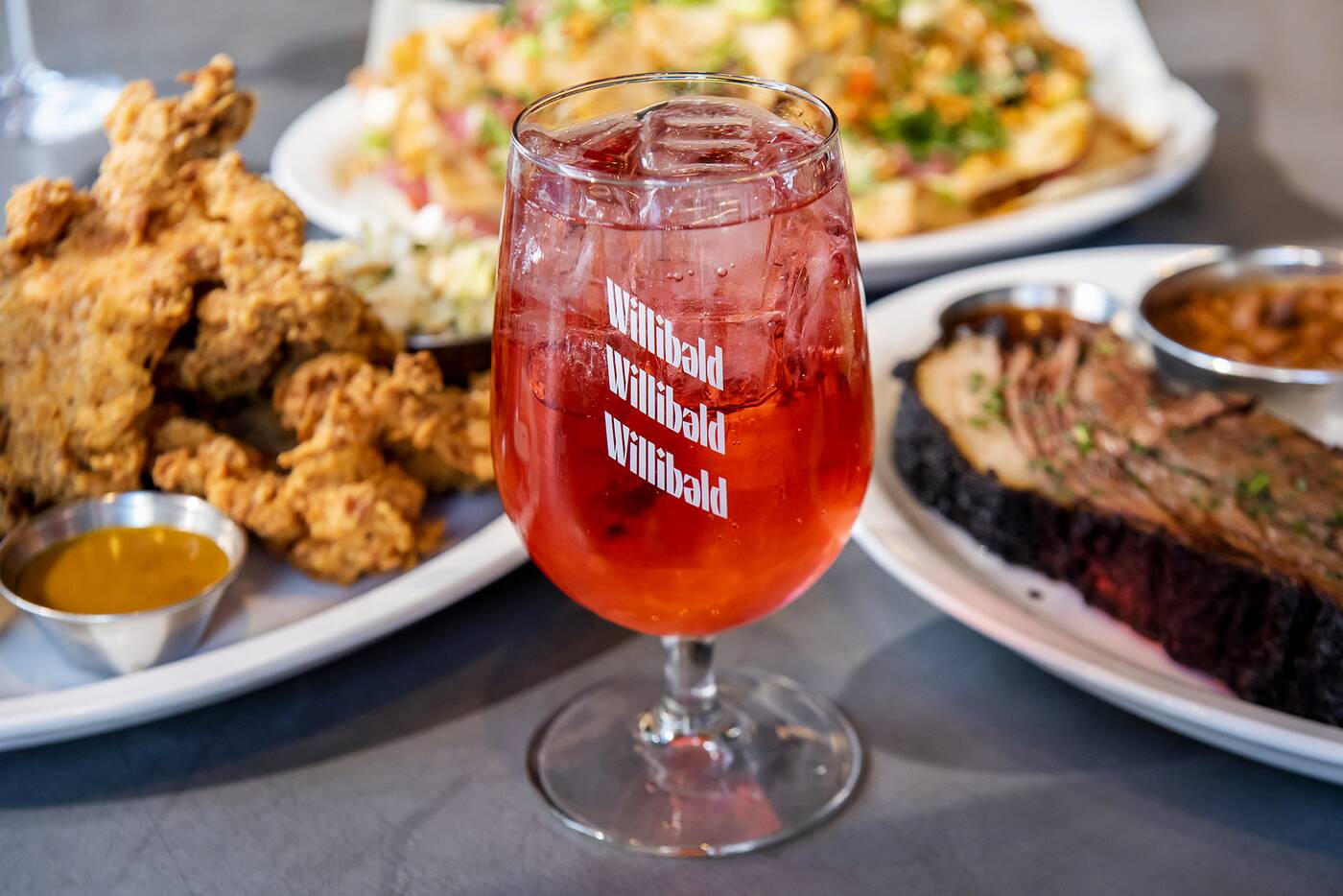 The Farmhouse limeade ($9.29) has a base of Willibald gin, and mixed with homebrewed hibiscus tea, lime juice, simple syrup and a splash of soda but just don't expect a strong kick.

To my tastes, the drink felt a bit watered down, as if there was much more tea than alcohol in it. 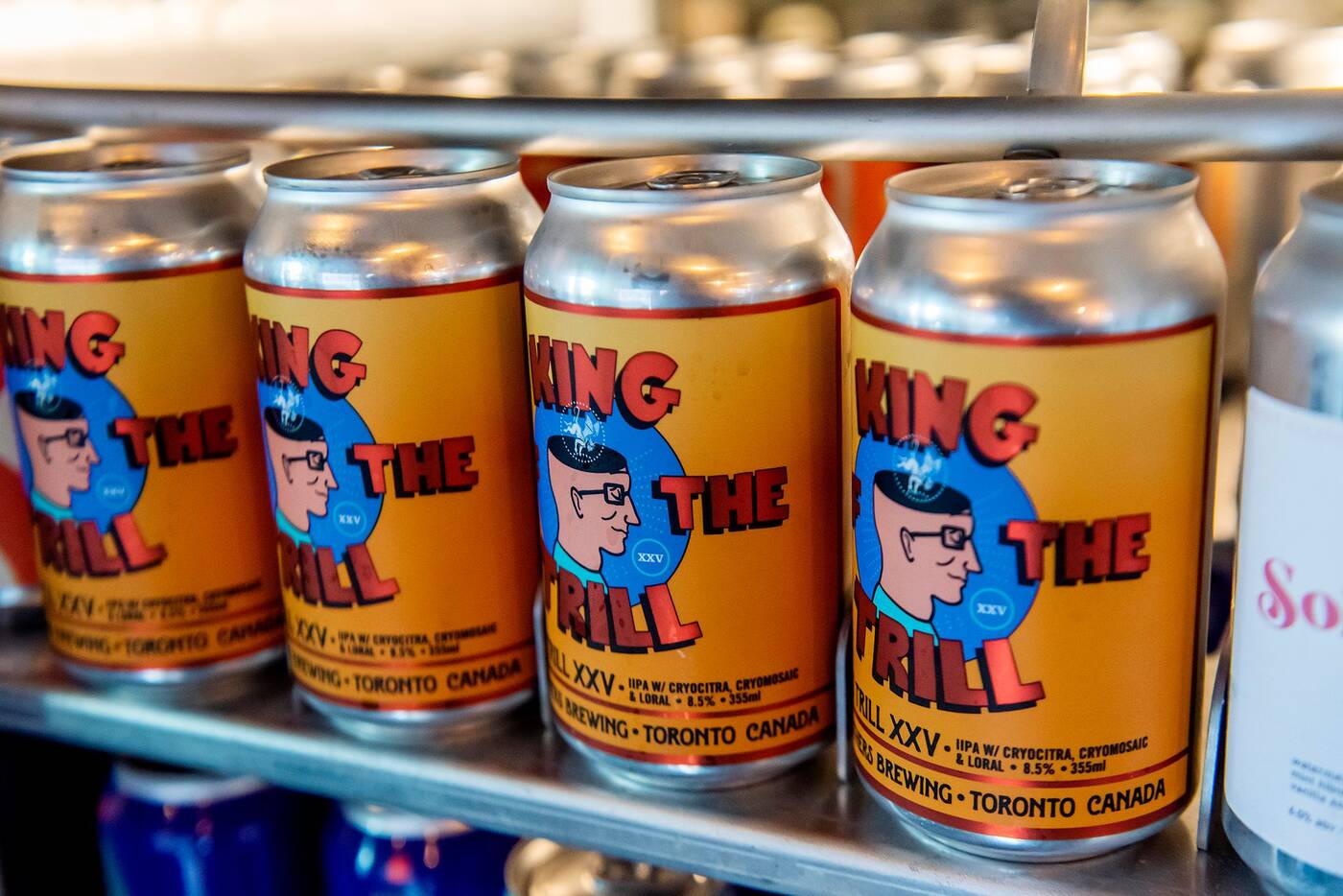 If you just want to grab some beer to go, head to the corner of the restaurant where you'll find some fridges lined with a selection of craft offerings.

The brews aren't ones you'd normally find at the LCBO. They include sour ales like Moon Wobble from Seaforth's Half Hours on Earth brewery as well as King of the Trill, an IPA from Blood Brothers in Toronto. 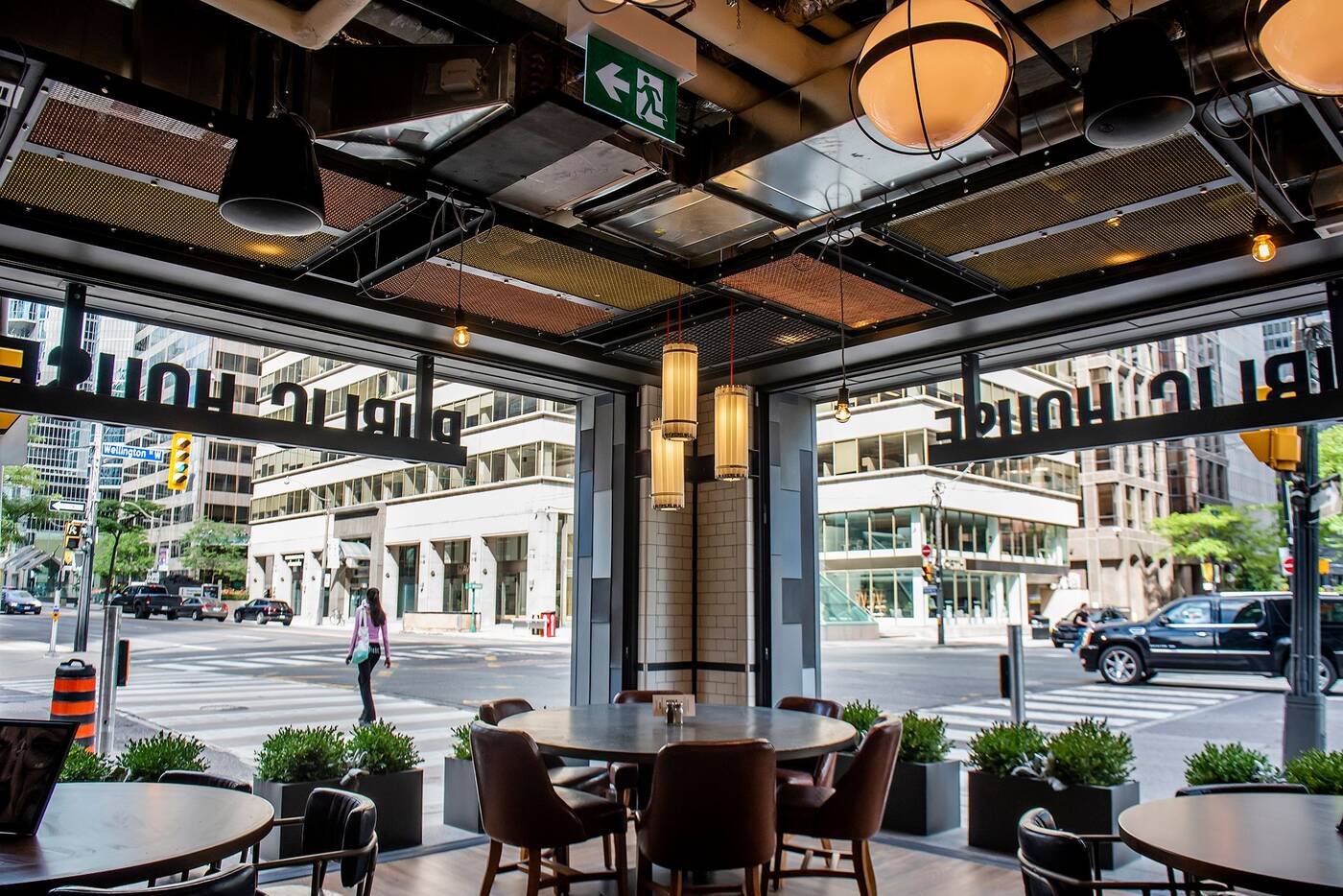 Once things return to normal in the downtown core, I can imagine Beertown Toronto as a bustling meetup spot with people drawn-in by  the open-concept windows and the big red letters that spell out the restaurant's name. 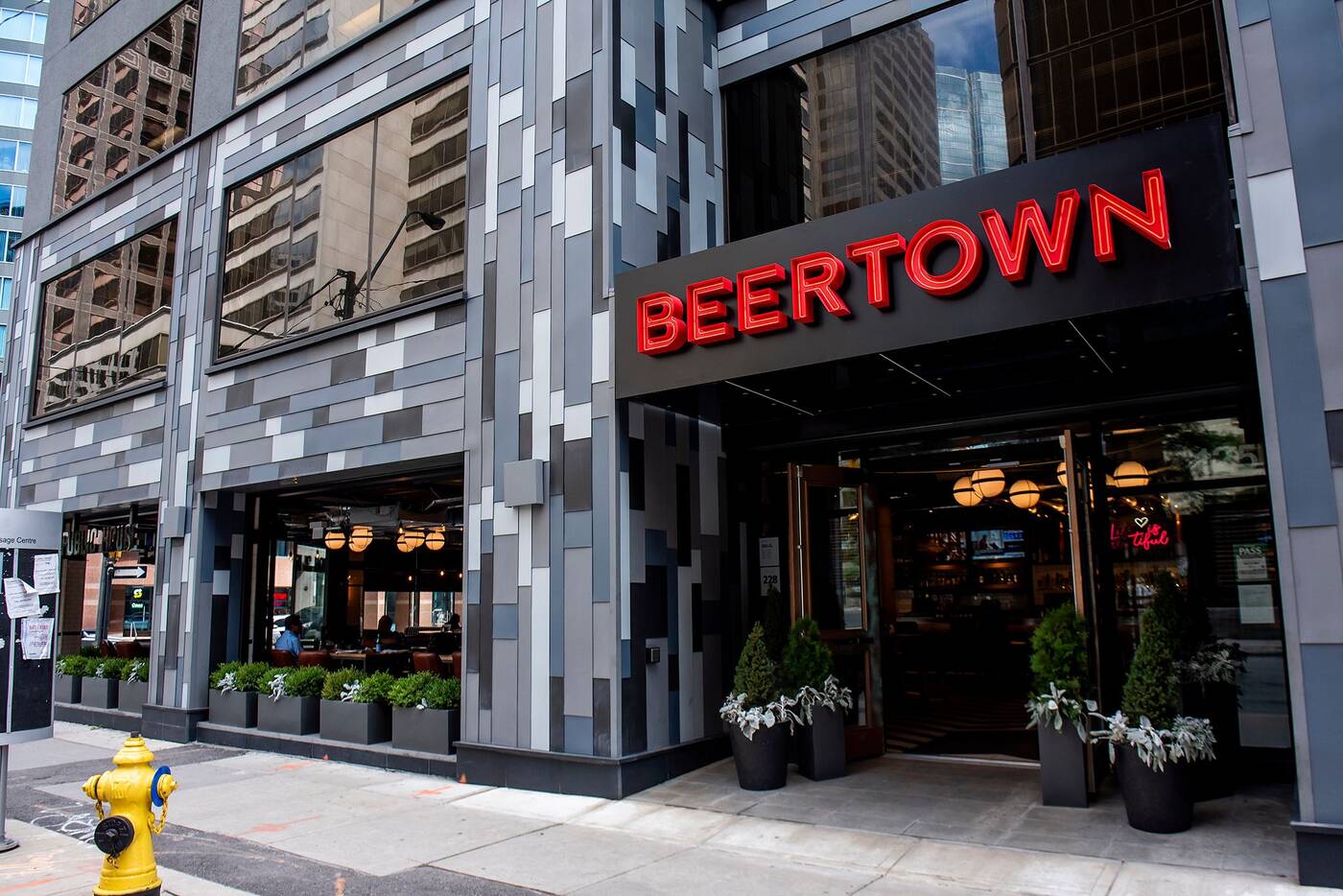