Bavette, Marben's cooler and more fun-loving sister, has opened its doors in the basement of 488 Wellington St. West. While Bavette has the same menu as Marben , it turns into a lounge complete with a DJ and dance floor once the kitchen closes around 10pm. Both spaces were renovated this summer.

Located on the stretch of Wellington St. west of Spadina that is ad agency central, Bavette continues Marben's theme of farmhouse revival in a sleeker and more nightlife-esque environment. Most of the walls are covered with exposed brick and there is wood everywhere, giving the room a really cozy and rustic feel. The majority of the seating consists of velvety red banquettes with mirrors hung over them, giving the space a little sparkle. The restaurant is dimly lit but has a warm amber glow. There is a bar at the back of the room covered in copper and there are various works of art around the space. 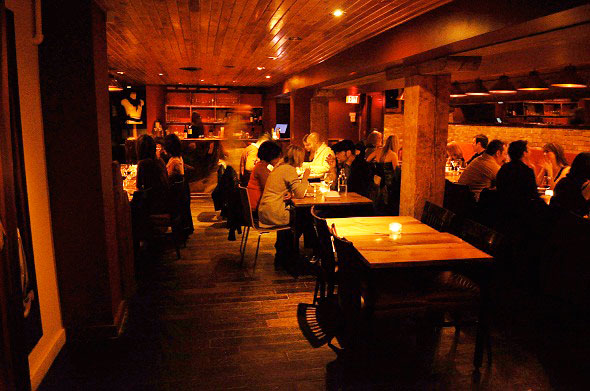 We arrived around 8pm and were taken through Marben and then downstairs to Bavette. Even before Bavette makes its change from restaurant to lounge, the indie rock and pop is pumping and the room is abuzz with loud laughter and conversation. While it seemed like my dining companion and I had the worst seat in the house, it was probably more because it was the only table for two in the restaurant.

Our server seemed quite knowledgeable and told us about the passion the chefs have for quality seasonal food. Bavette uses local produce from local farms, and even mentions the names of the farmers and other suppliers who provide the produce used in its menus items such as "John's Burger" or "Petra's Cheese." She also told us that Bavette encourages shared plating, which explains the mostly big tables for four or more people throughout the restaurant.

The menu is limited to just a few appetizers, mains, and desserts, but each option seems well thought out and unique to Marben/Bavette. Since nearly everything is made in-house, the menu changes almost daily. Bavette also offers a varied selection of wines and seasonal cocktails. 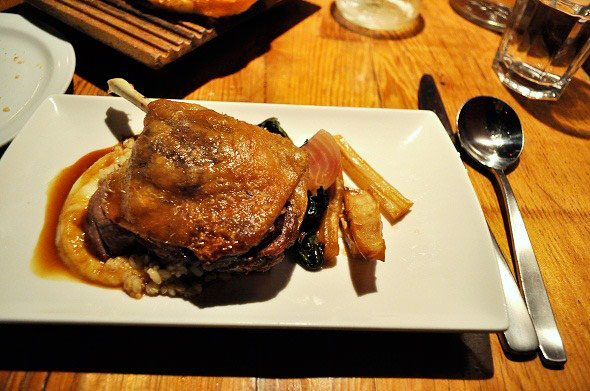 I had the duck confit ($17), leg of duck which came with an assortment of vegetables, mashed potatoes, gravy, and quinoa. The duck was perfectly juicy and melting off the bone, but the skin was still crispy.

The problem I have had with duck in that past has been that it is often too salty, but Bavette's duck was minimally seasoned without being bland. The vegetables, mashed potatoes, and quinoa were a nice complement to the duck. The gravy on the mashed potatoes had a surprisingly slight vinegar-y taste which kept it from feeling too heavy. I was also surprised by how much I liked the quinoa, which added an interesting change in texture to what could have been a very lackluster meat and potatoes kind of dish.

My friend ordered the roasted beef ($18 - top photo). Even though he wasn't asked how well he wanted his meat done, it came rare which was just fine with him. The brown butter hollandaise gave the roasted beef a lovely light flavour without taking away from the flavour of the meat itself. What we were both fascinated by were the pommes kennedy. They were cubes of potato that had thin slices cut into them, making them a crispy and

flaky dream.Apparently they are named after the cook who created them. The other vegetables that came with the dish were fairly standard, but tasted fresh. 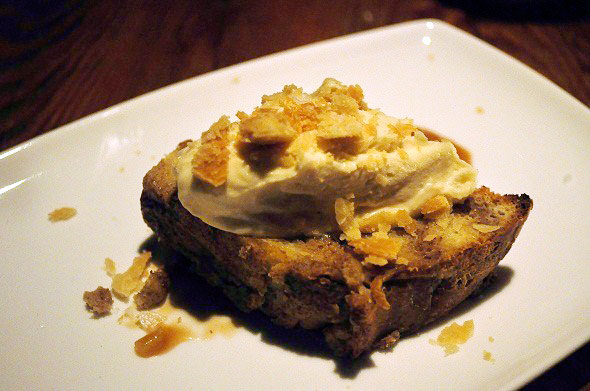 For dessert, we shared the warm apple pudding ($7) which was a lot more bread pudding than apple. As a less than huge lover of sweets, I appreciated that it wasn't too sweet and was balanced out by the airy cream cheese topping, but overall I found the dessert to be a bit dry.

I had no idea what to expect from a restaurant that was bringing farmhouse revival to the city, but was pleasantly surprised at how enjoyable and interesting Marben/Bavette makes comfort food. Our entire dining experience was so warm and welcoming from our very nice server to our huge mugs of coffee at the end of the meal. You really do feel at home at Bavette even if you've never spent a day in the country, much less a farmhouse. 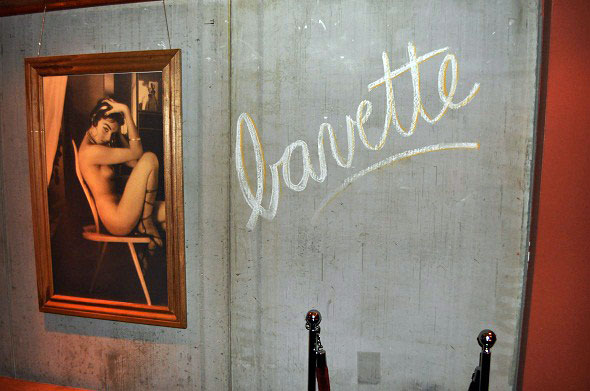 Bavette is open Friday and Saturday nights from 7:30 to about 10:00pm as a restaurant and open until 2:30am as a lounge. If they think they will be busy enough, Bavette is sometimes open on Thursday nights as well.The space is available for private events and provides bottle service once the tables have been cleared and the dance floor has been set up. Neither Marben nor Bavette are wheelchair accessible.