Batifole translates loosely to “frolicking,” which might just be how you leave this place if you love French food.

Known as one of Toronto’s most traditional French restaurants, Batifole has a reputation as a great place for drinking affordable wine with a classy but laid-back atmosphere and great service. 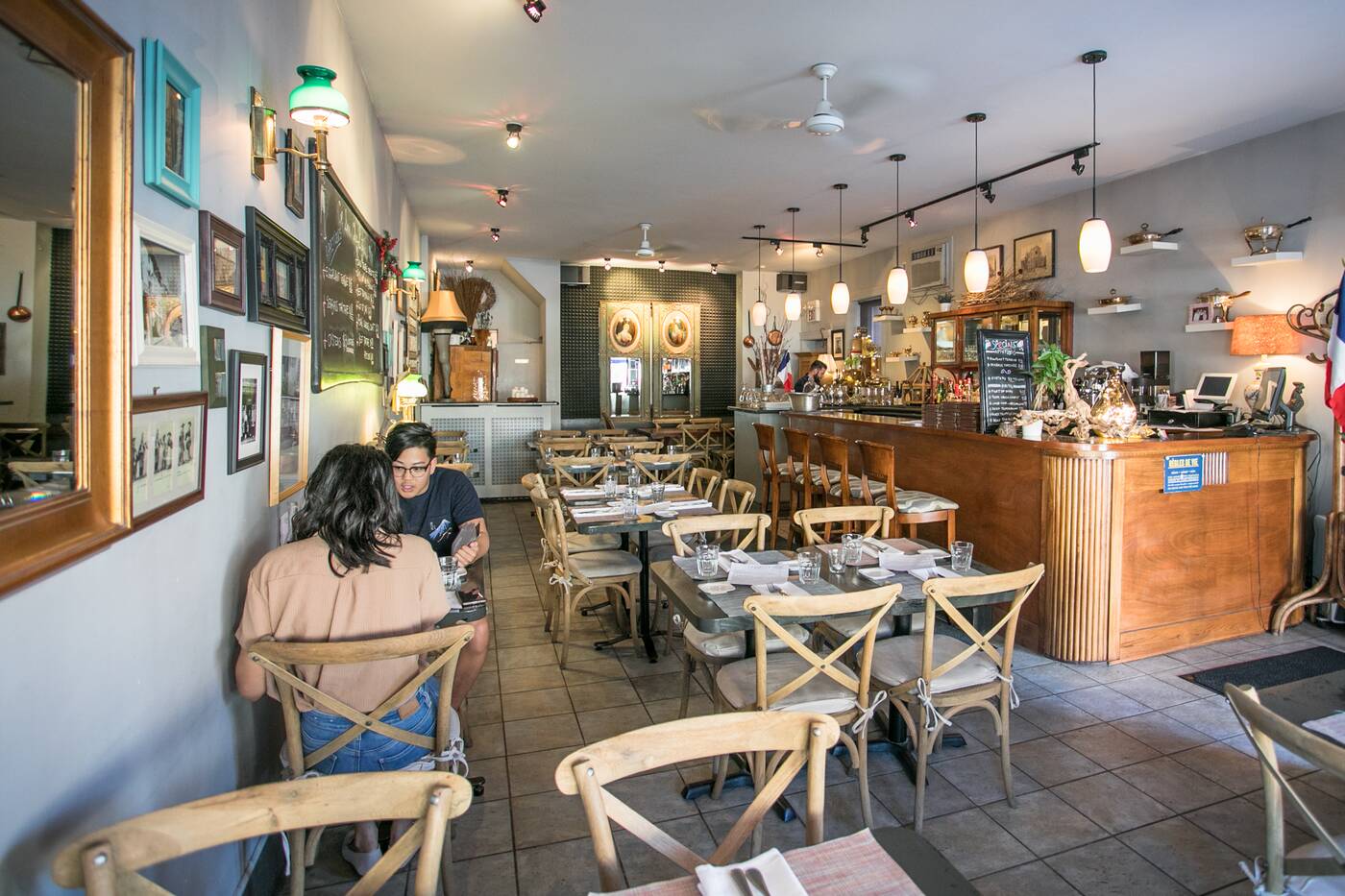 The concept of “bistronomy” is meant to be exemplified here, more accessible, typical dishes listed on the menu alongside more upscale, gastronomic ones. 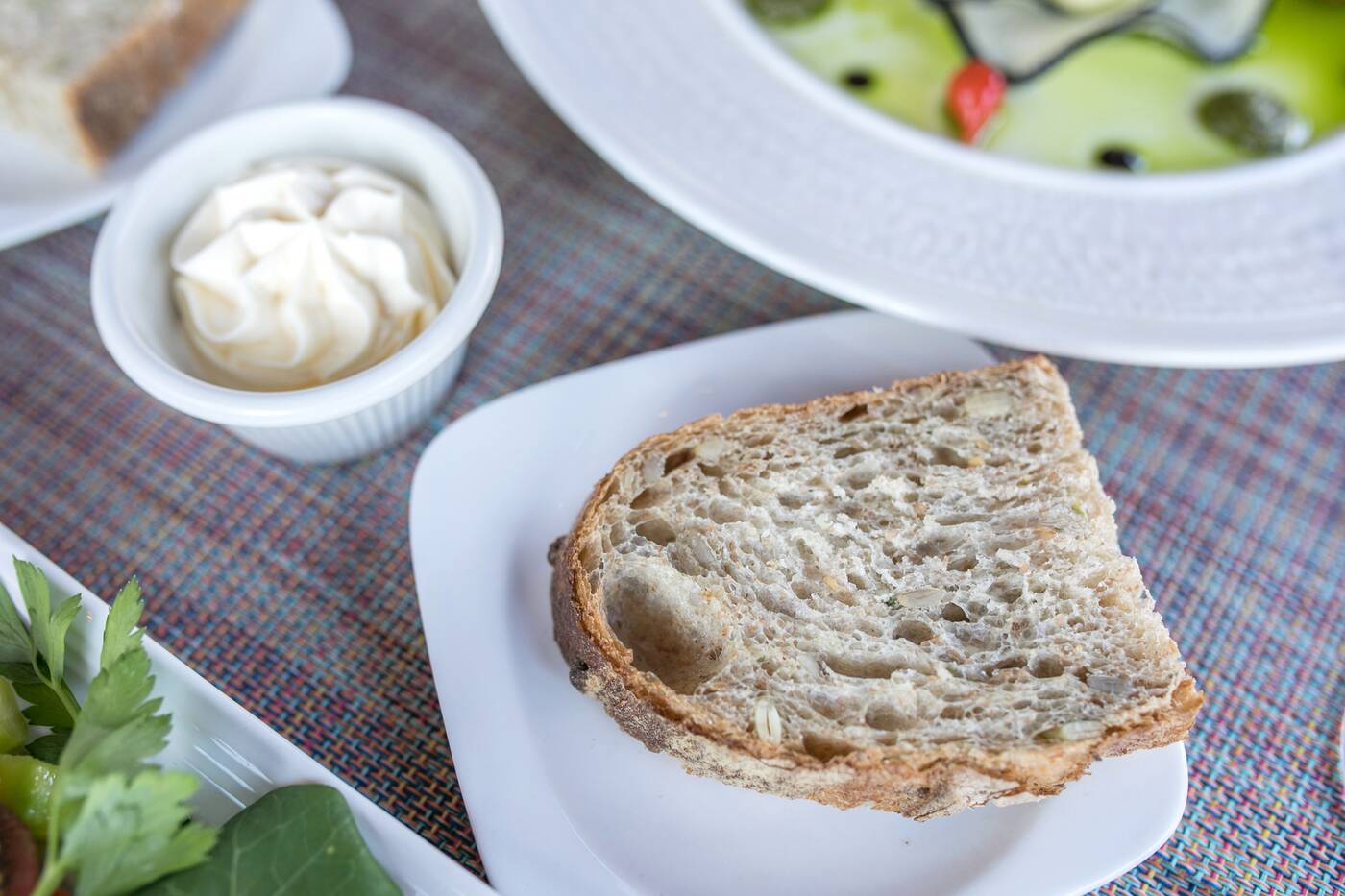 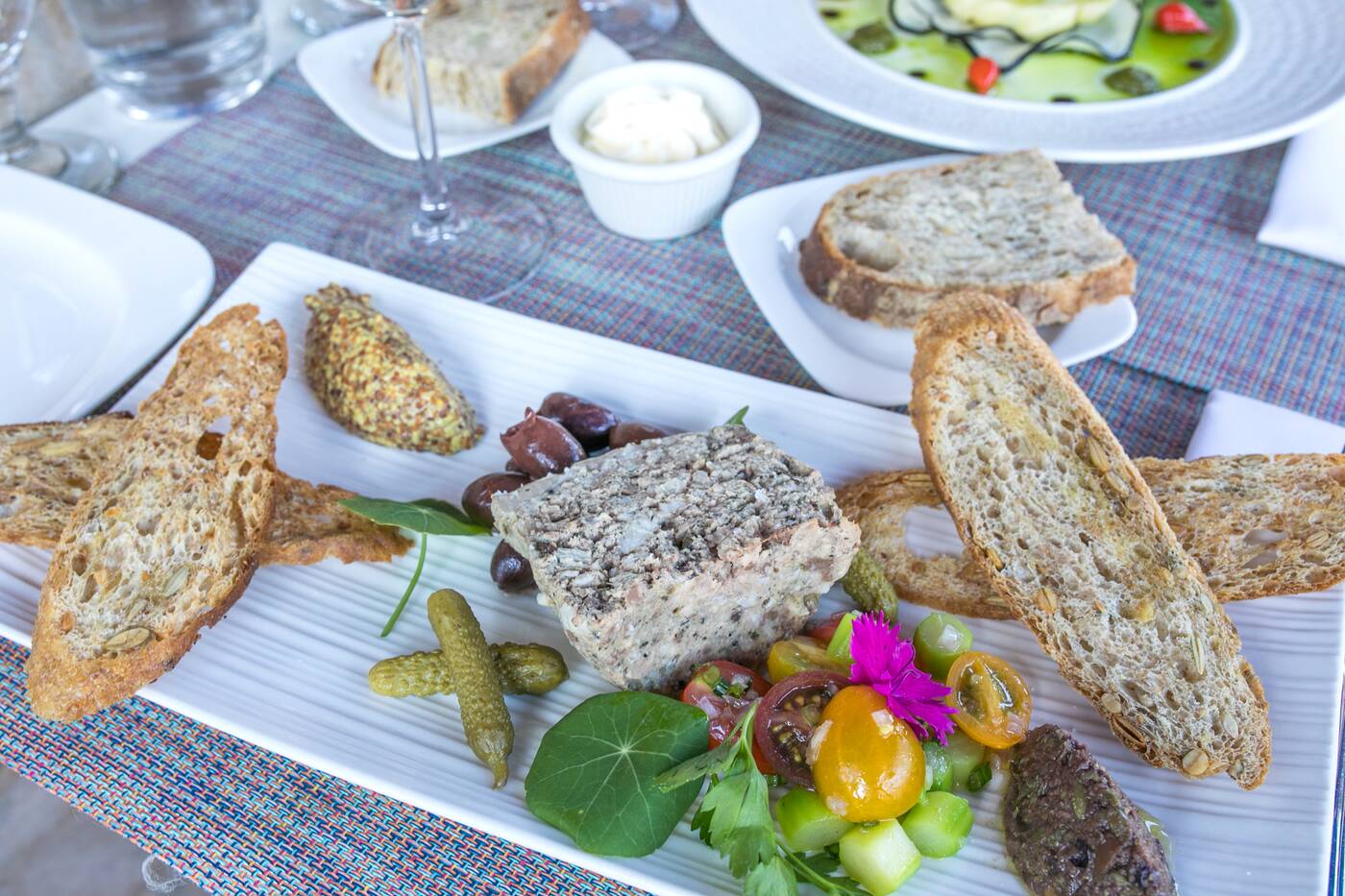 Actual French entrees (as in appetizers, not mains) for $14 include a pate de campagne or country style pate, made in house out of pork, chicken liver and juniper. 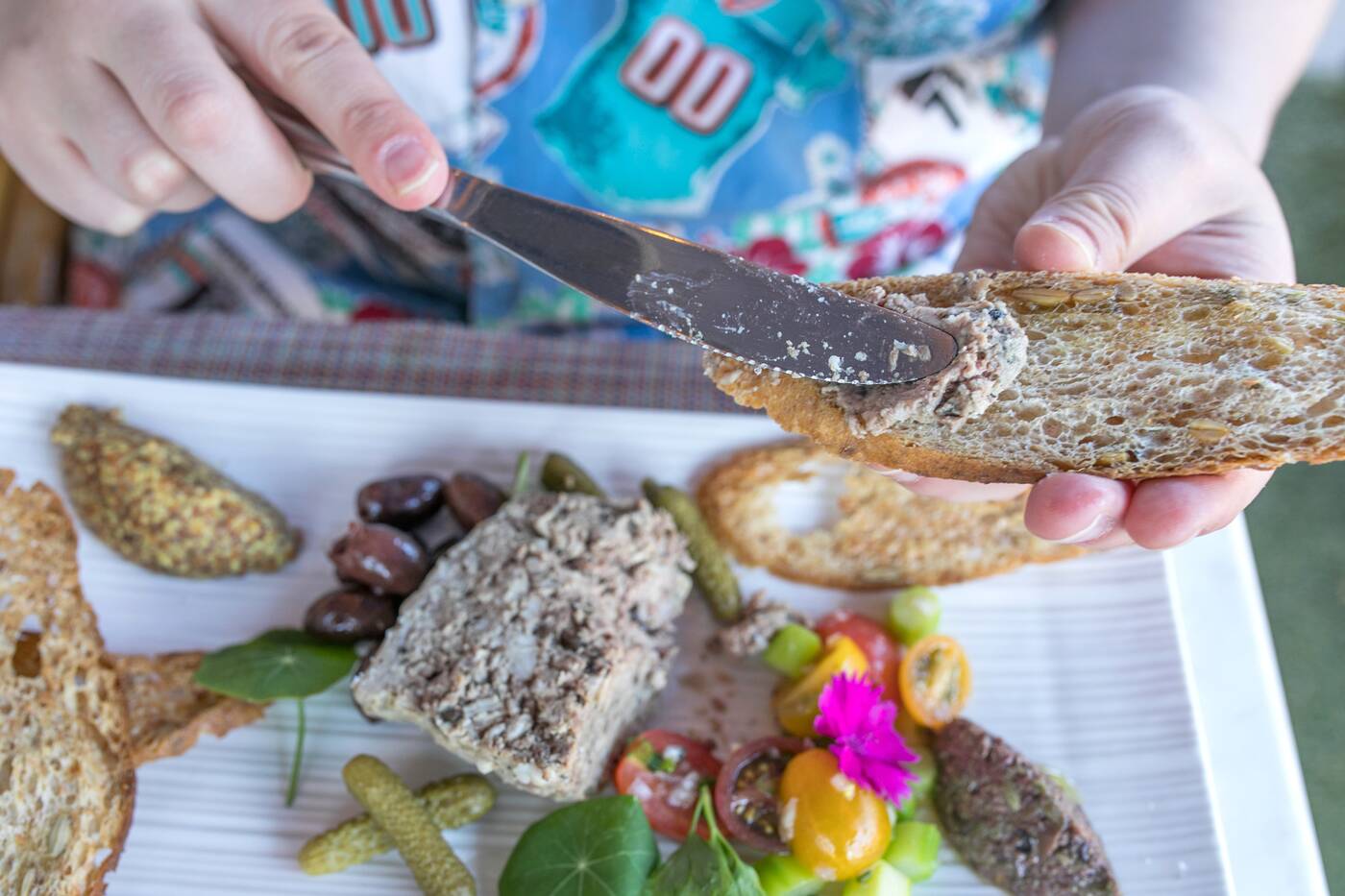 It’s more chunky, almost like a terrine, rather than spreadable item, accompanied by a thin toasts of a baguette version of the same seed loaf as well as hot grainy mustard, olives, cornichons and a house tapenade made with black olive, caper, anchovy, garlic and thyme. There’s also a refreshing little salad of asparagus and cherry tomato. 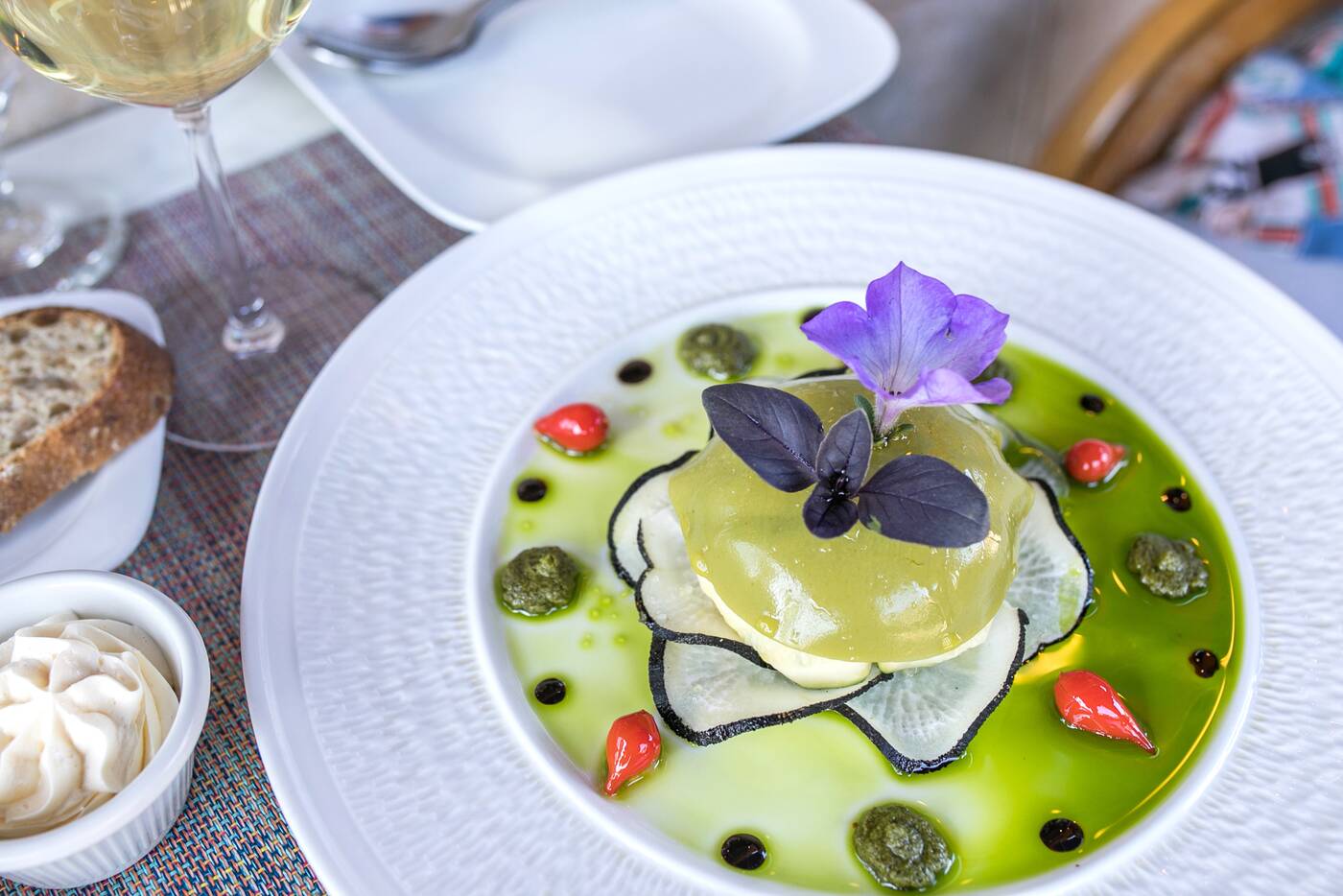 On the bistronomy side, we have a newly-invented app of crab enveloped in zucchini, resting on a bed of furled black radish slices and crowned by a surprisingly nuanced gelee of zucchini, asparagus and fish stock. 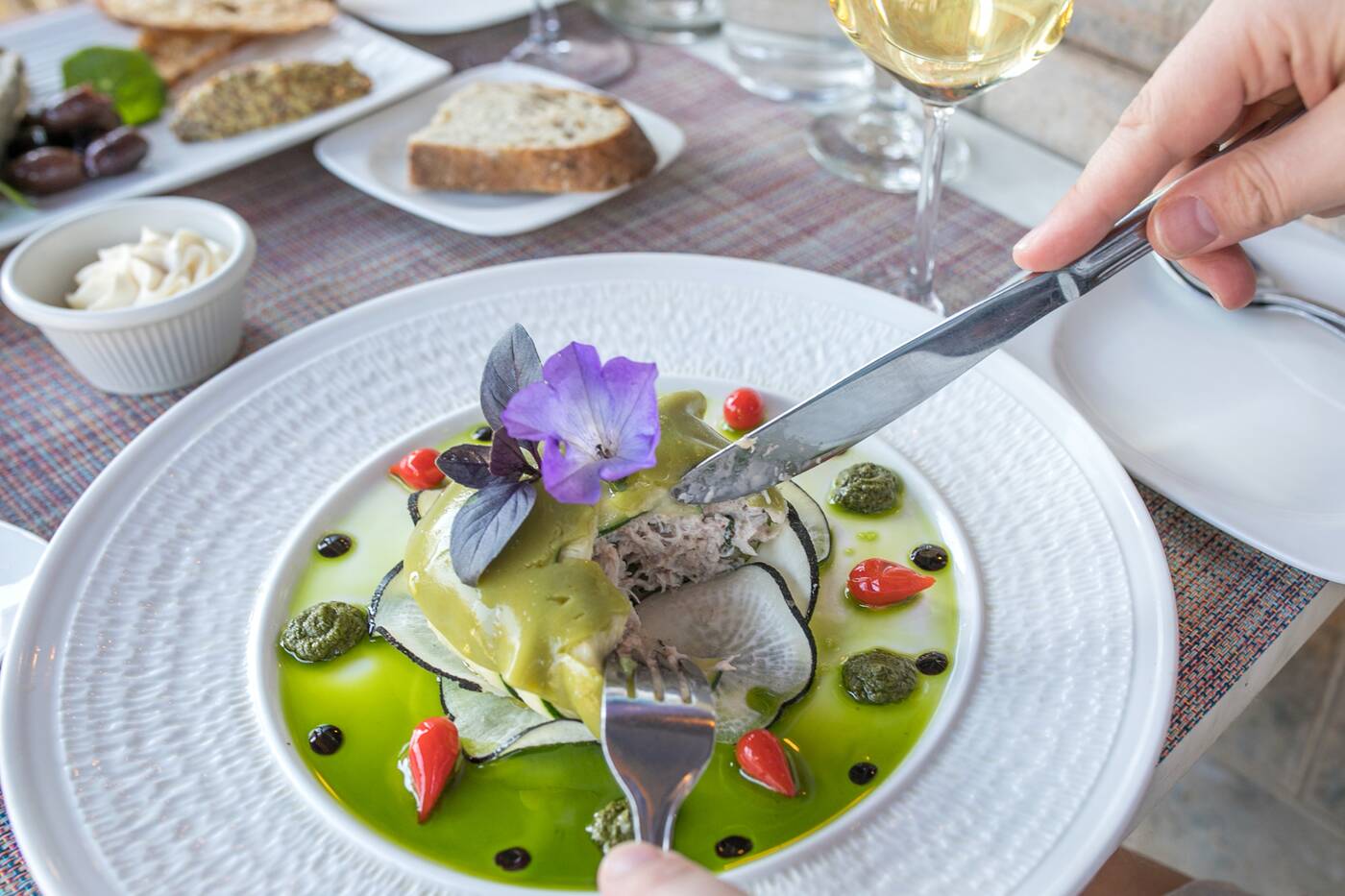 Plating is outstanding, each component reveals itself slowly, and the flavours are fresh and spring-like. 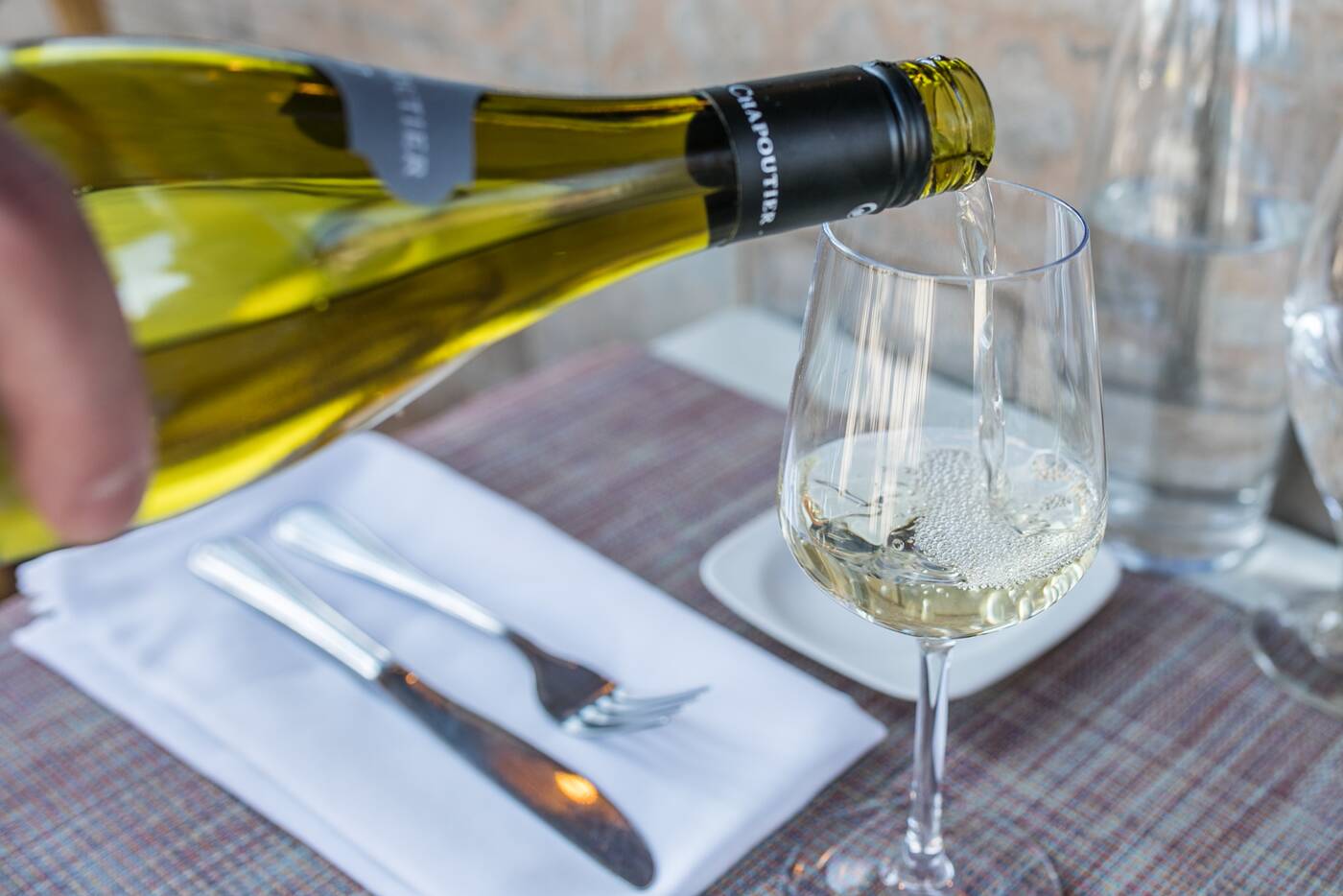 It’s recommended we pair the entrees with a dry, fruity Cotes du Rhone white, or a smooth Viognier with more minerality. 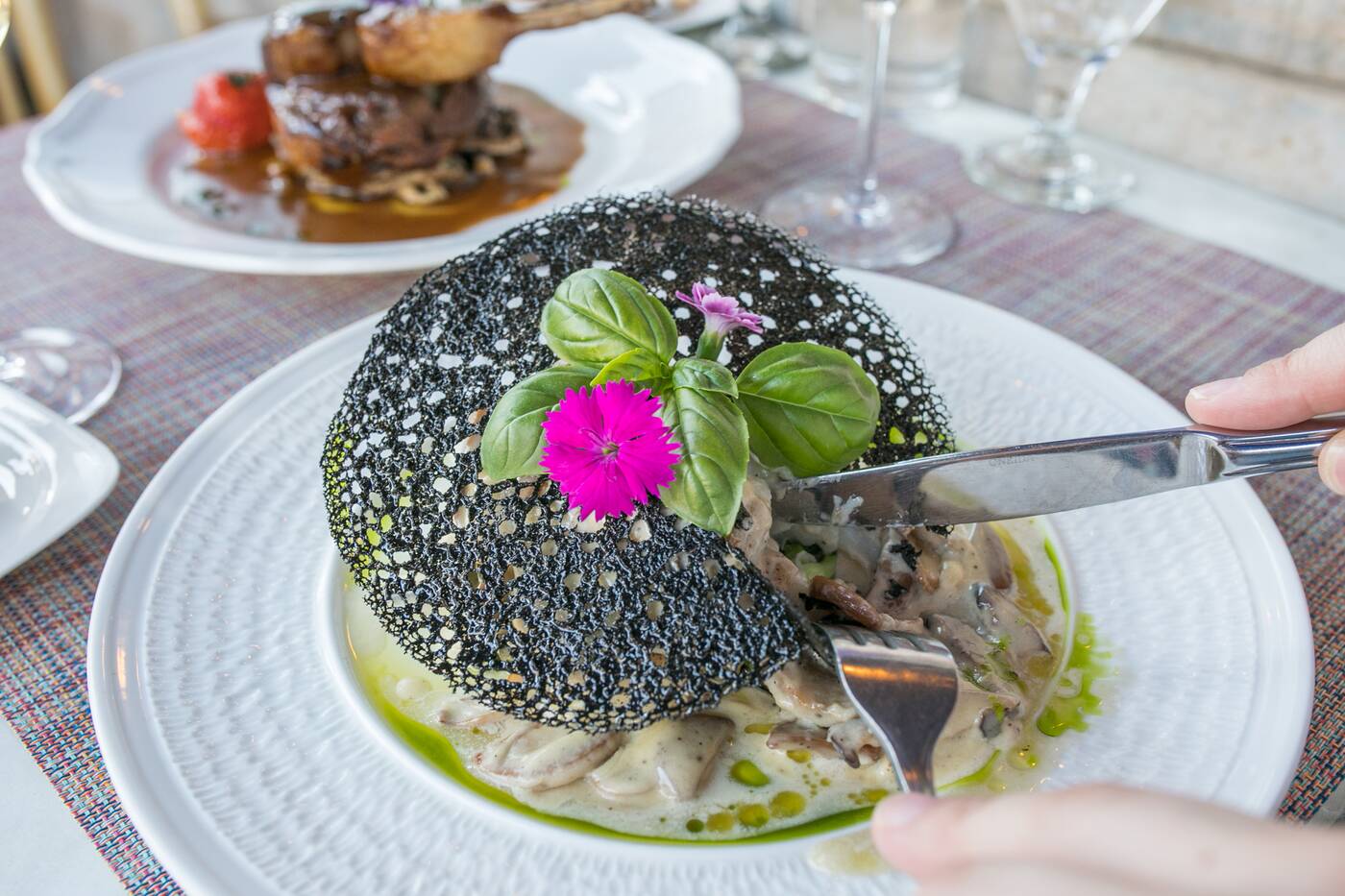 A filet of dory special ($28) undersells itself as accompanied by a mushroom cream sauce and vegetables. The luscious steamed fish is impressively plated with bok choy and a squid ink tuile, the rich and fragrant mushroom lemon cream sauce bringing everything together. 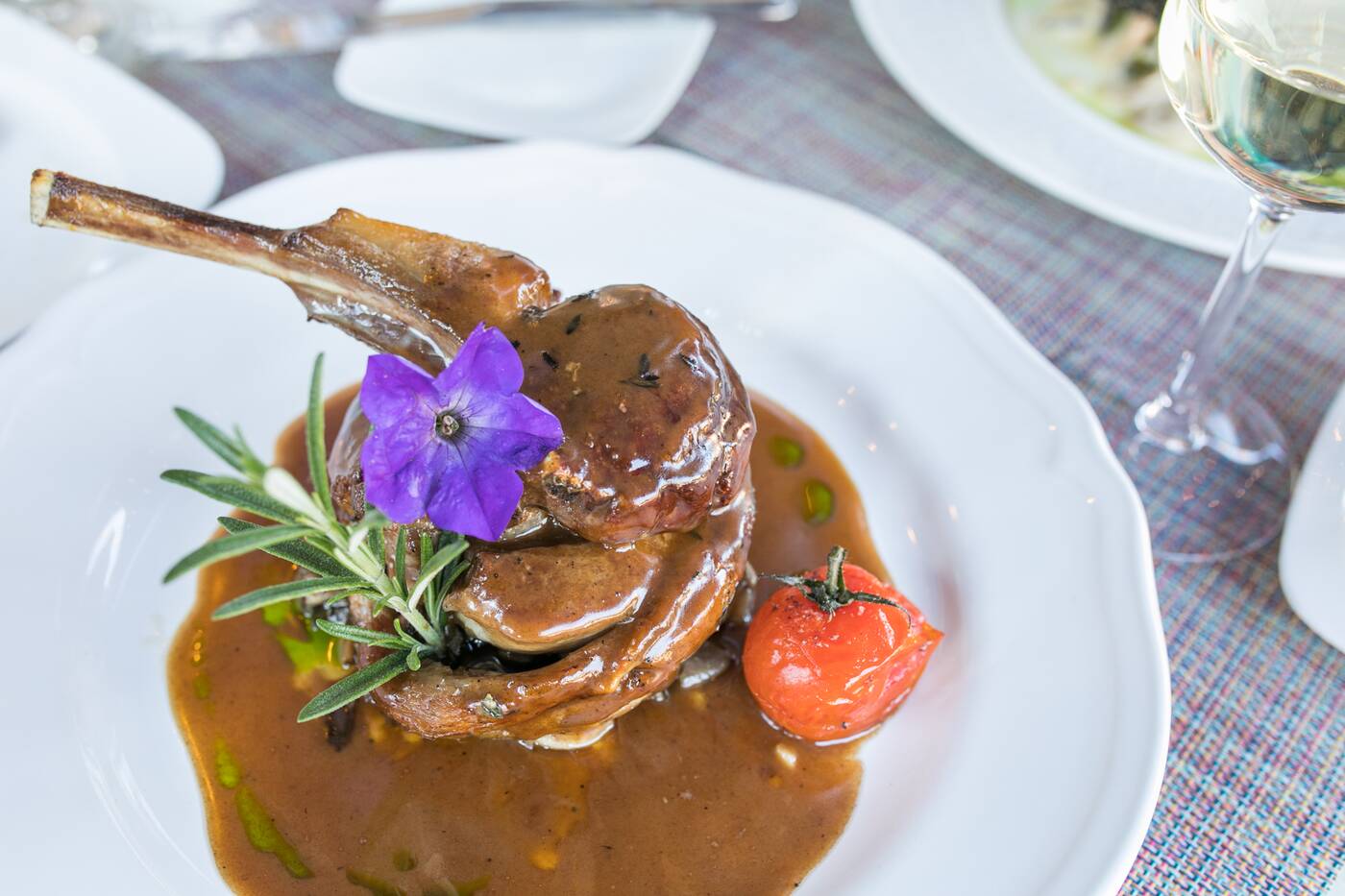 A lamb chop and medallion special ($45) plays more to the bistro side of the menu again, plated with oyster mushrooms, creamy hazelnuts and a luxuriously concentrated jus, made using the bones from the medallion. 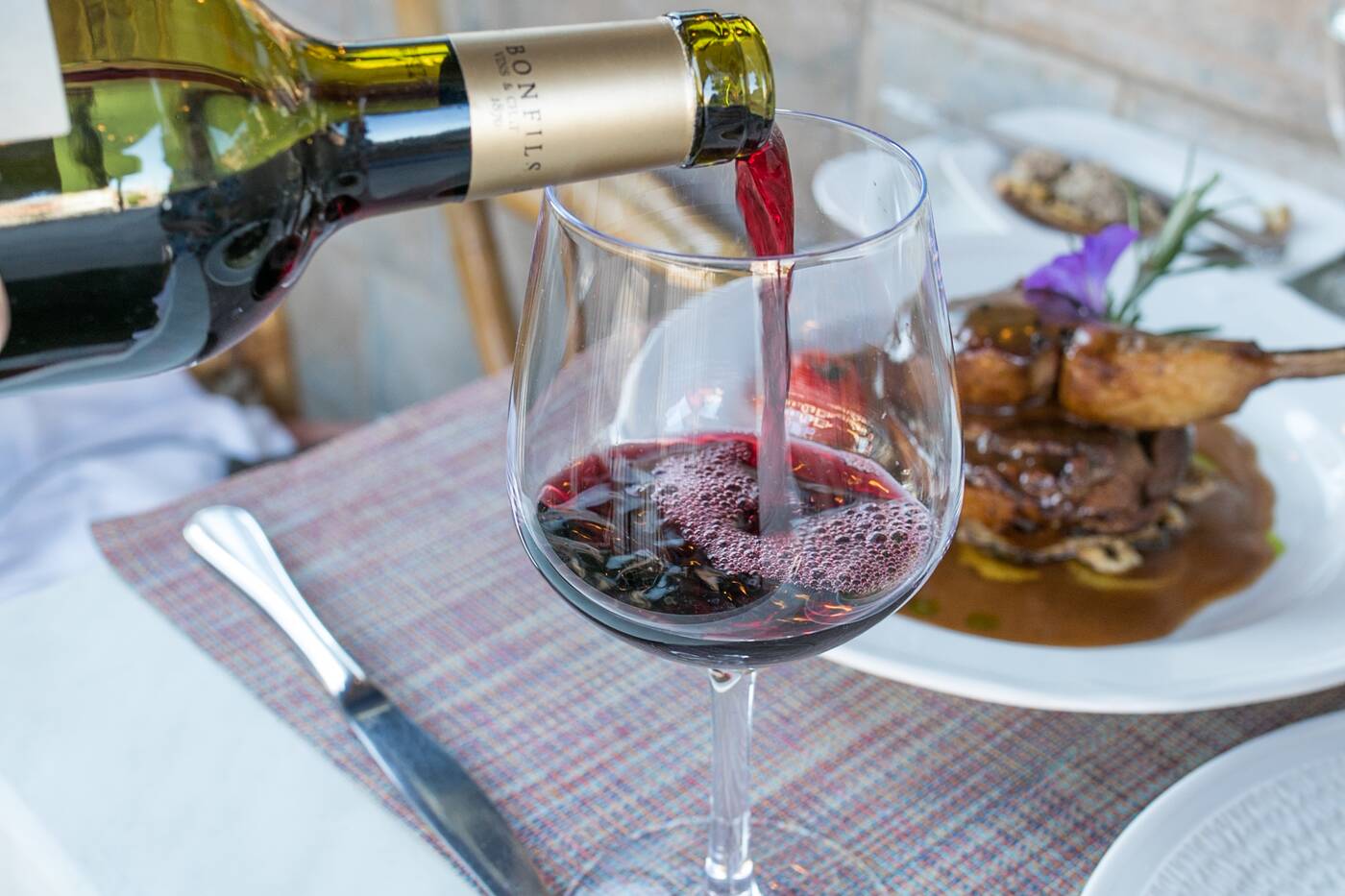 This pairs well with a full-bodied, fruit-forward Corbieres, the headiness of the wine and the lamb interacting nicely. 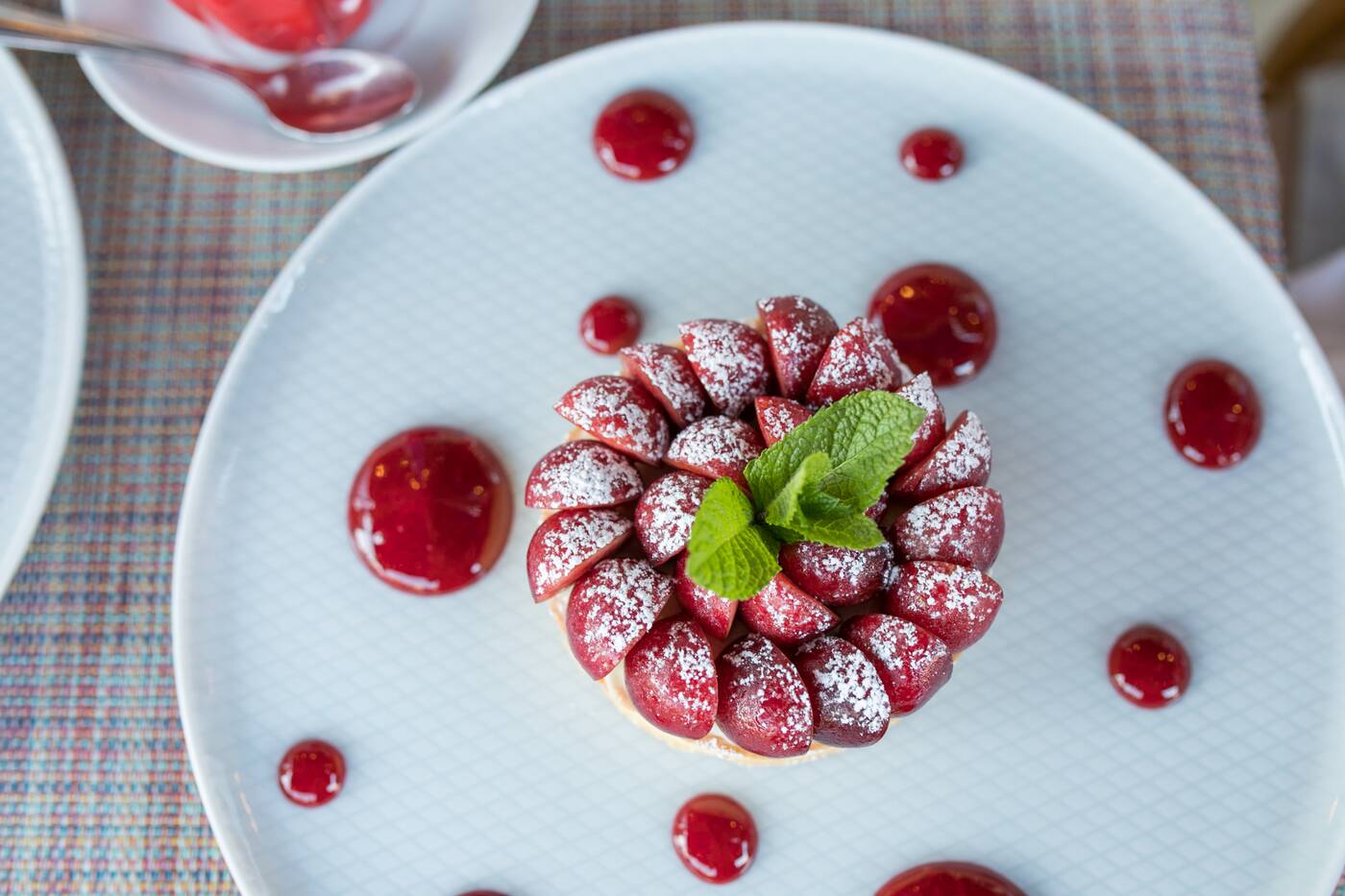 For dessert, there are creations like a tart filled with tangy lemon cream and topped with the most beautiful concentric circles of fresh cherries. 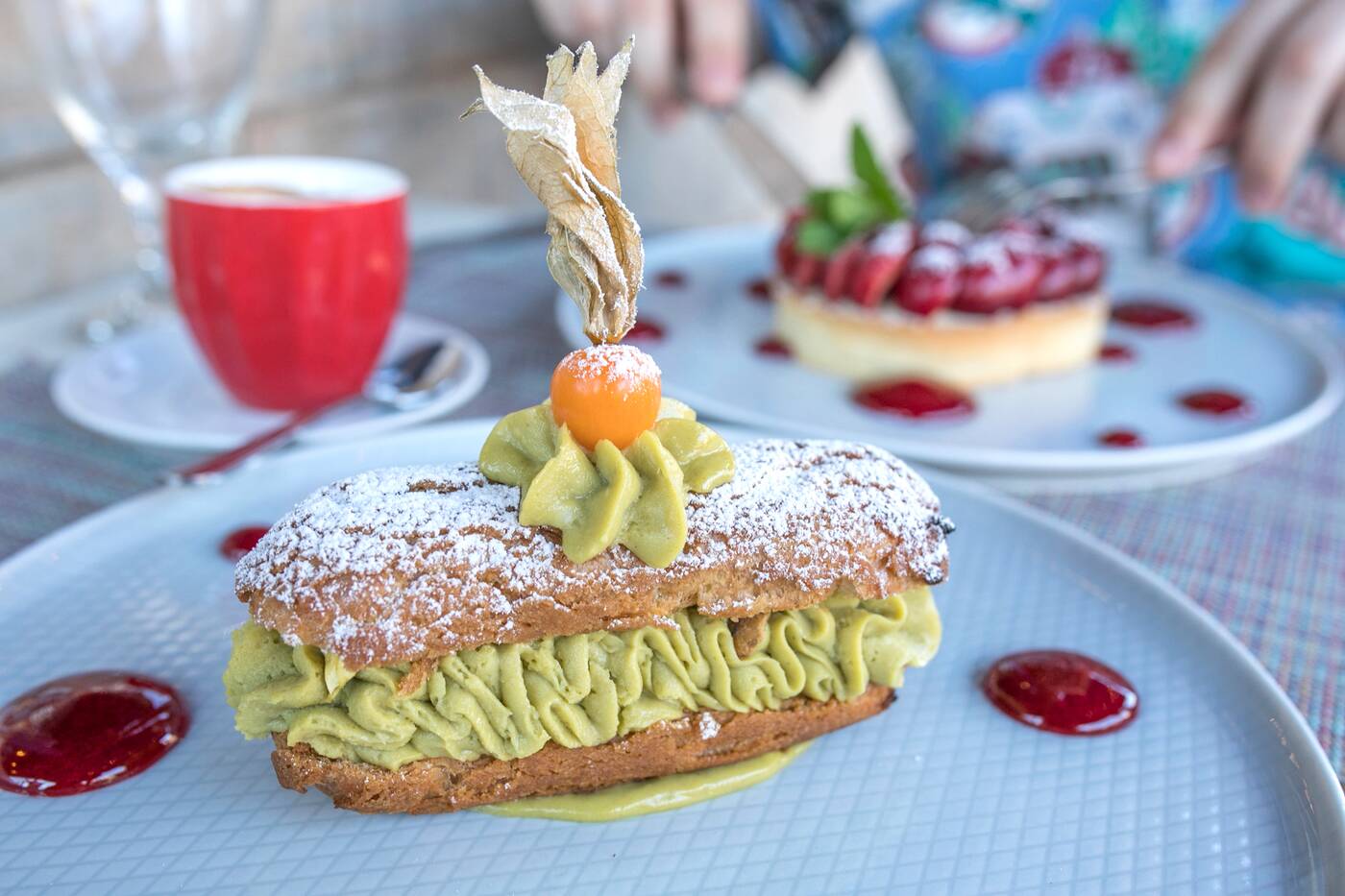 There’s also a pistachio eclair with pistachios inside and a gooseberry on top. Both desserts are set off by a raspberry coulis that adds a punchy sour note. You can also opt for a souffle, though that takes about 15-20 minutes. 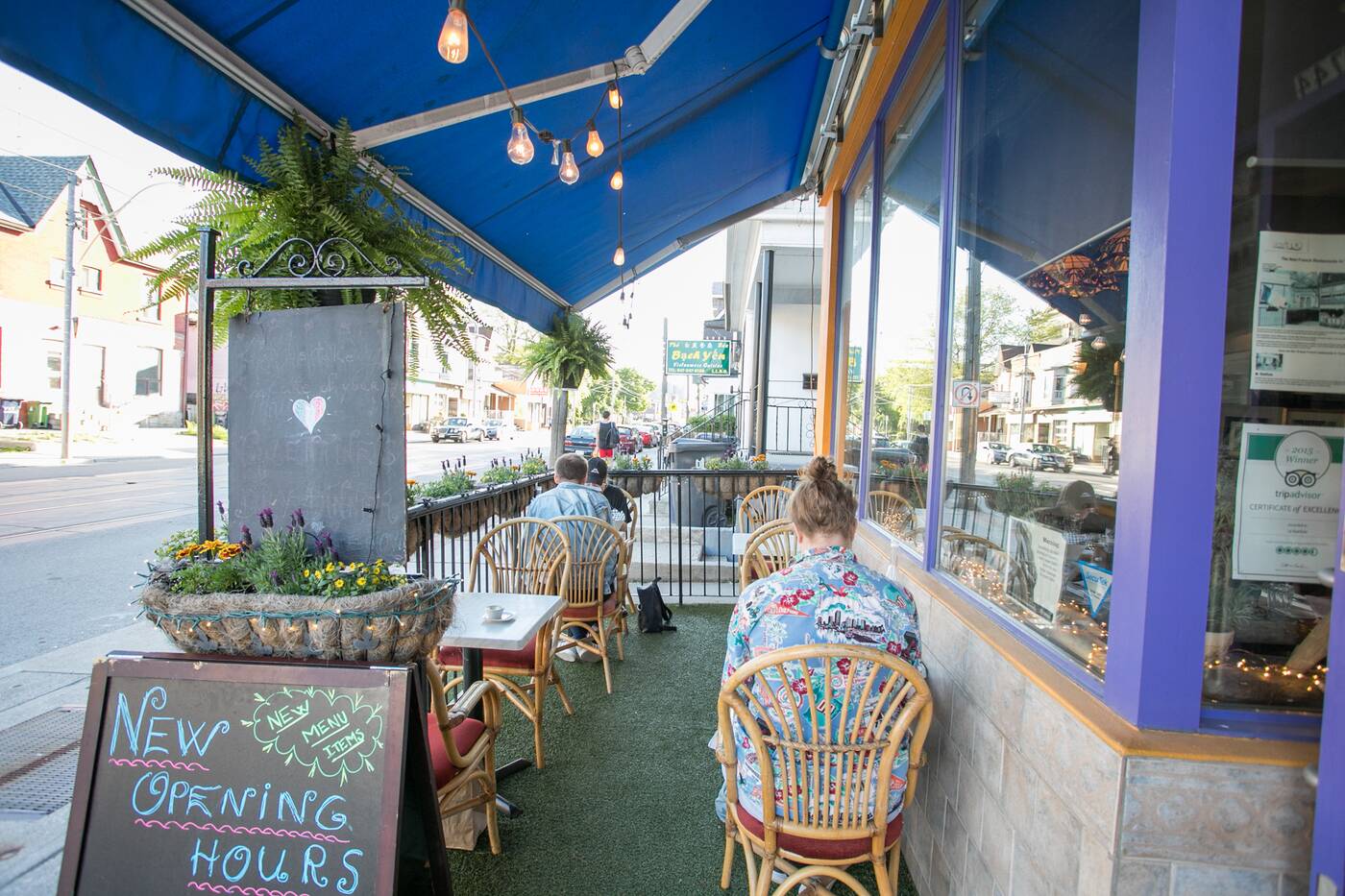 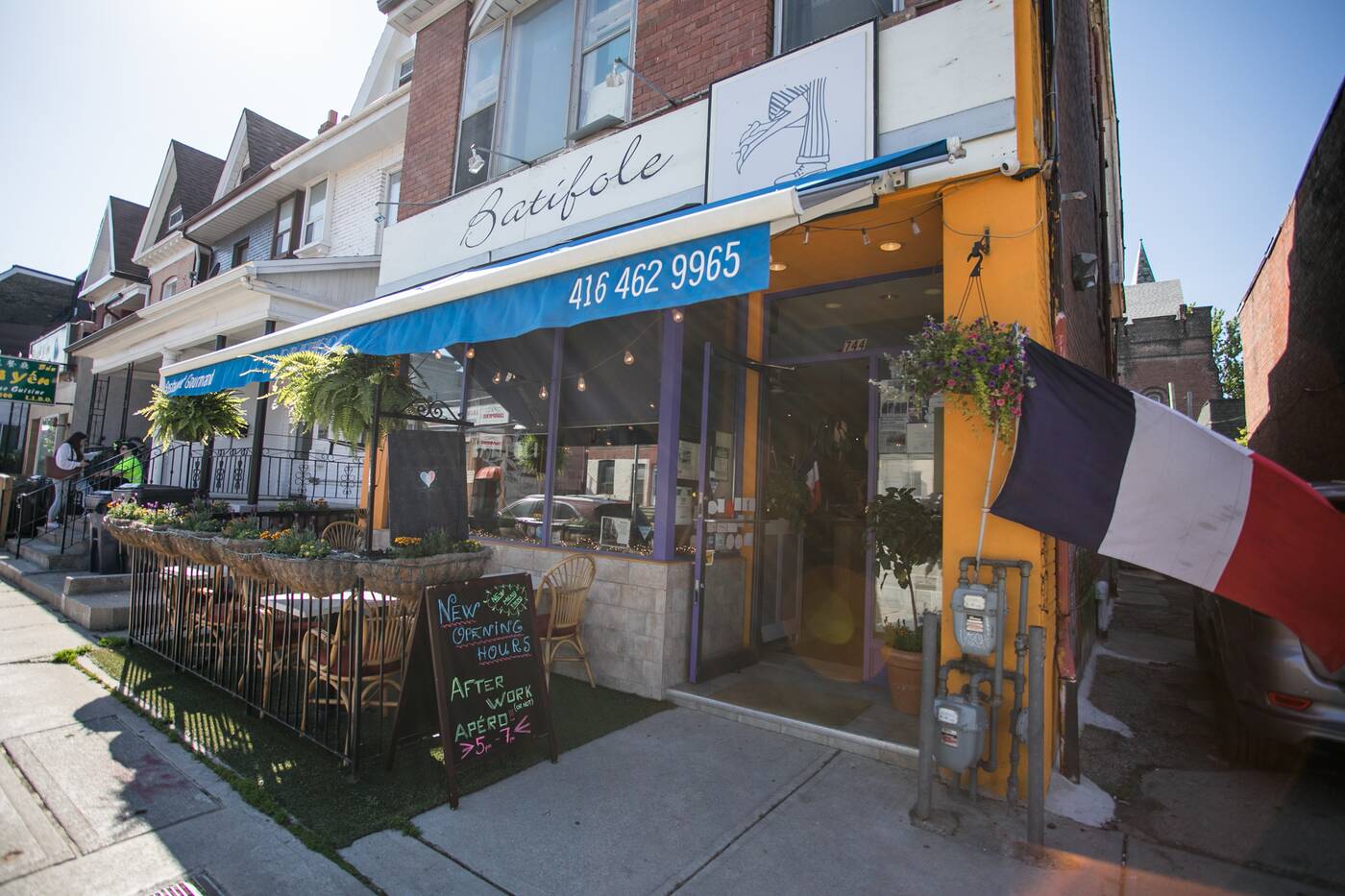