Bar Vespa is one of the newer additions to Liberty Village , and one of a number of restaurants in the neighbourhood to carve out a niche in Italian fare. At only a week old, it's the baby of FAB Concepts , the company behind the Pour House , Pogue Mahone and (neighbour to Bar Vespa), The Brazen Head .

Serving up Italian comfort food at a reasonable price, Bar Vespa offers a sleek setting and friendly service. They also have a decent sized patio, which we chose to sit on, given that it was a gorgeous afternoon, and I haven't nearly reached my quota of patio time this summer.

Moments after our server had introduced herself did the manager come out to say hello and give us a run-down of the menu as well as her recommendations (Diavolo and Prosciutto pizzas, by the way). It was a nice touch. 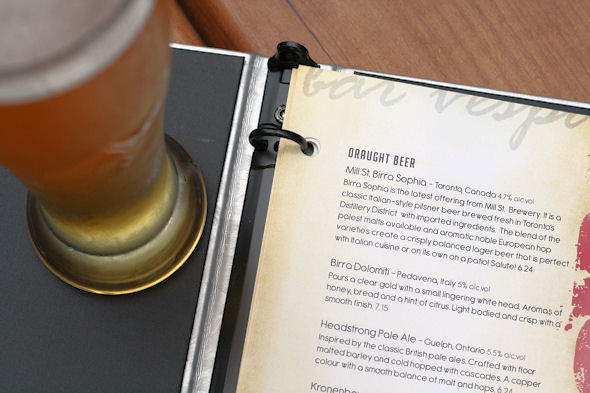 So we were on a patio, and the sun was shining...time to peruse the drink menu. Among other beer, Bar Vespa offers 9 Italian brews - 7 bottled and 2 on tap. I went with something a little more domestic however. Birra Sophia is Mill Street Brewery's answer to Italian-style pilsner, and as of right now, Bar Vespa is the only place it can be found. Crisp, and light, it reminded me of Peroni, and was a nice complement to the sunny day. 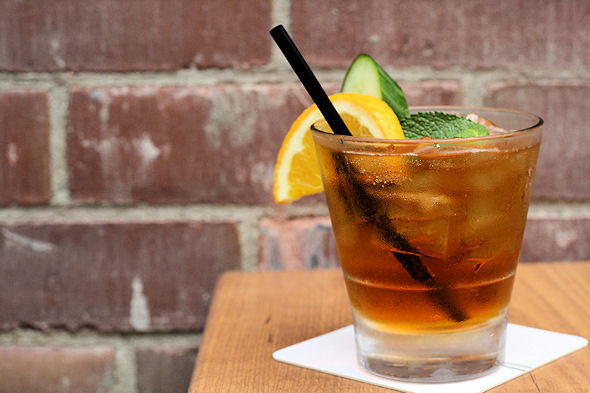 My fellow patio-sitter went with a Pimm's Cup ($10), a more Anglo, as opposed to Italian choice, but a refreshing one nonetheless.

Preceding the meal, our server brought us bread accompanied with a dry herb mix (rosemary, thyme, oregano & chilli), over which she poured olive oil. It was a tasty alternative to the typical balsamic vinegar option. 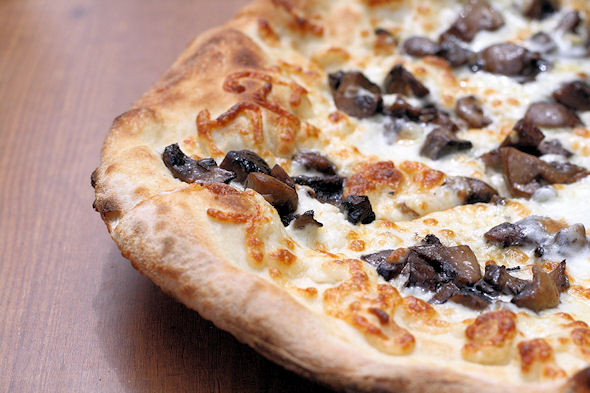 Despite the manager's recommendations, we went with the Mushroom Pizza ($15) and the Butternut Squash Ravioli ($14). I've been on a bit of a thin-crust pizza kick lately, along with the rest of the city, so thank you Bar Vespa for letting me put another notch on my belt. Topped with three varieties of mushrooms (portobello, crimini and button) on mild Telaggio cheese and drizzled with truffle oil, it is one of their white pizzas - so minus the sauce, but not the flavour.

The repeat offender however, would have to be the ravioli. Served in a brown butter and sage sauce with roasted garlic, it was a nice mixture of savoury and sweet.

Where Bar Vespa shines though is in their quality of service. I can't tell you how many different servers came to check on us but it never felt intrusive or suffocating. 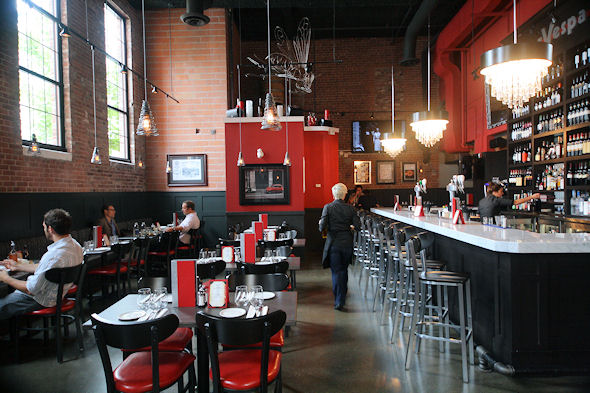 As we were finishing up, a passerby loudly advertised the risotto ball appetizer for those who were listening. I love a good risotto ball, and only wished she had walked by earlier as I somehow missed these on the menu. Sigh...next time. 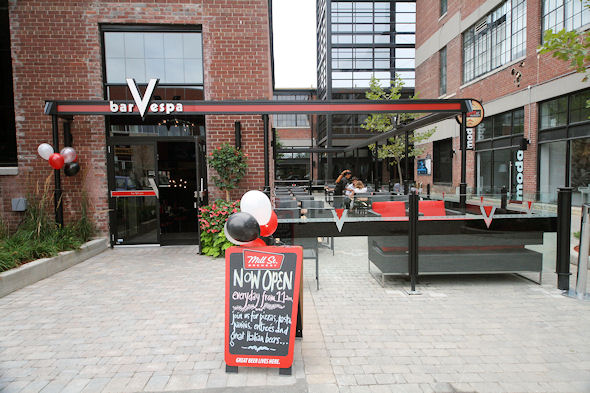 Footnote: Rare for the neighbourhood, Bar Vespa also has a kid's menu that offers pizza (pepperoni or cheese) and pasta served with tomato or, the ever popular with the five and under crowd...butter sauce.