So when I say that Atelier Thuet is, no question, one of the best brunches in the city, there's a lot of lattes, snausages and fruit coulis backing that up.

We'd had brunch at Thuet proper before. I couldn't remember exactly what I had, but I know it involved a couple of configurations of pork, a decadently rich sauce, and a drunk-on-meat stumble home.

As soon as we sat down, we noticed the panier: a "basket of freshly baked breads, croissants + pastries, house made confiture" ($13). The menu says that it serves two. The menu lies. It could serve 4. Without breaking a sweat.

We were sorely tempted, remembering it fondly from last time, and knowing just how thoroughly Thuet knows his way around bread .

We were midway through a "we shouldn't, right?" debate when our server helpfully mentioned that we could always take it to go if we didn't finish it. Oh look, my arm is made of rubber. 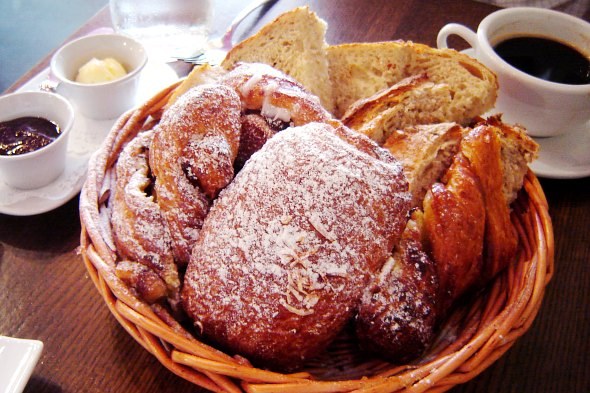 And getting a little closer... 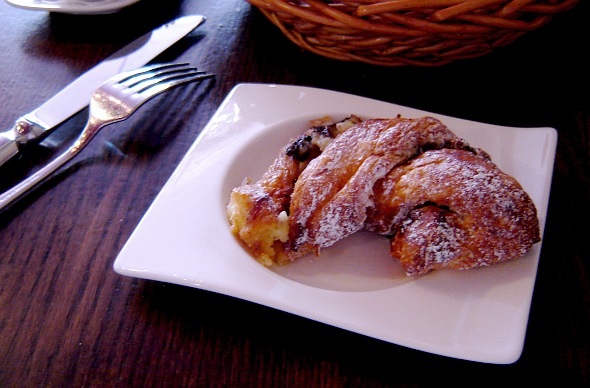 Unbearably soft and buttery. If science had to classify it, it would have to think hard about labeling it a 'solid'.

There are two large flatscreens mounted on the walls of Atelier, which played classic black and white movies throughout our brunch. We arrived during Funny Face , and left at the start of Casablanca (which prompted an immediate trip to the video store, thank you power of suggestion).

It was so pleasant that I think Atelier's ruined me for eating breakfast without black and white classics playing in the background. Some Dr Strangelove with my Tuesday granola. 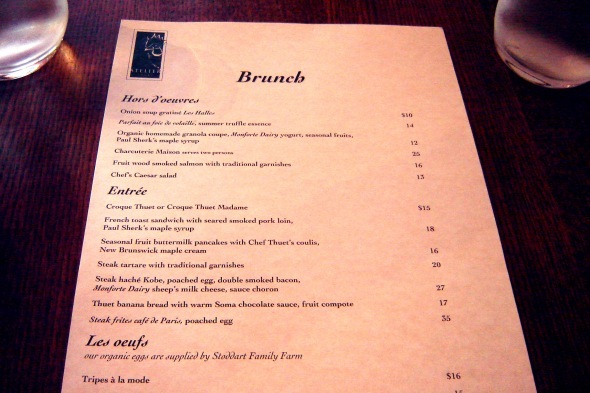 The atmosphere at Atelier is almost surprisingly laid back. It's lush, but comfortable. The classic movies didn't feel like pretension, just a natural part of the decor (which also includes a fantastic leather sofa, a wooden stag head and red branch light fixtures).

The films are played silently with subtitles, creating an unplannably excellent moment where just as Ilsa begins to hum 'As Time Goes By', the restaurant's sound system kicked in with 'In-A-Gadda-Da-Vida'. Juxtapositions ftw.

But back to the food -- his, "Eggs Meurette, poached in red wine sauce, mushrooms and double smoked bacon" ($17). Mine: the "French toast sandwich with seared smoked pork loin, Paul Sherk's maple syrup" ($18). Both perfectly prepared, perfectly presented, and perfectly delicious. Read what else we had to choose from here .

While the french toast was everything you'd expect from Thuet french toast, it was possibly surpassed by the seared smoked pork loin. You can taste that that pig had a good, healthy life. That he was happy. And now I was happy, because he was in mah belly. 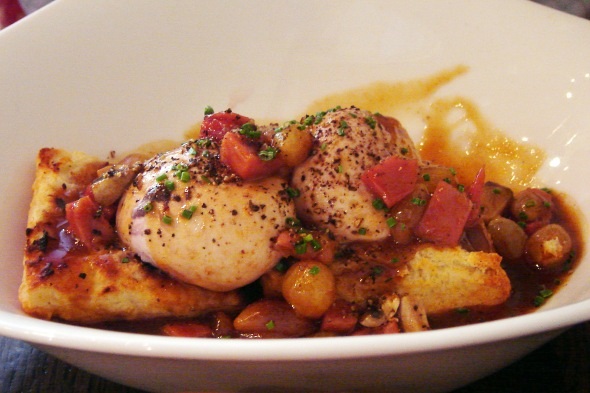 And here's The French Toast (when you're this big, they call you "The"): 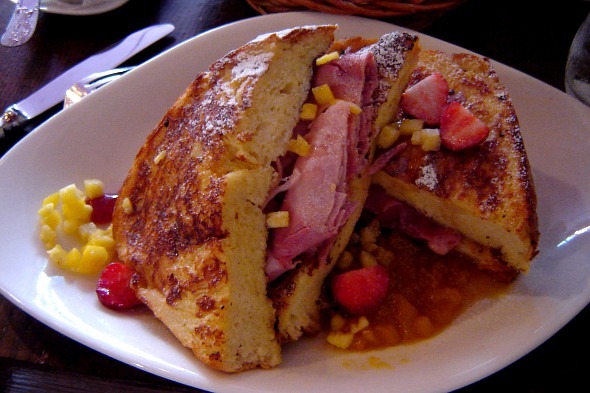 Here it is again, about 20 minutes later. 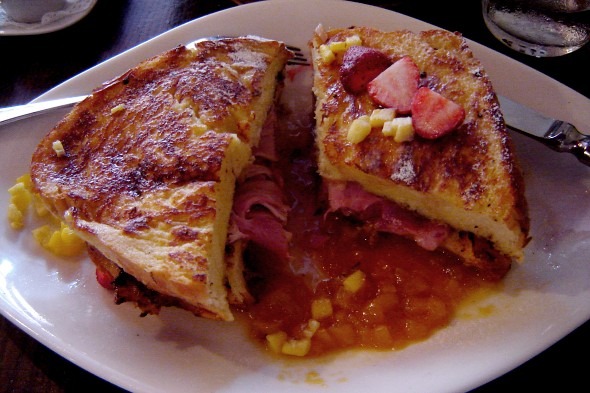 I'm no food wuss. But a french toast sandwich is a like a deep fried mars bar. It seems like a good idea at the time, but... no, it's just a good idea. It simply requires pacing.

Only hold onto your arteries kids, because when you finally call 'uncle' and have your panier (and more than 1/2 your french toast) packed up to go, they come back. And they offer you dessert.

Did we do it? Did we throw reason to the wind and add to that gut-busting breakfast a cappuccino eclair? Or mille feuilles or pistachio choux?

But maybe next time.