Aragvi is one of only a few Toronto restaurants serving authentic Georgian cuisine. I'd managed to recruit a team of five to brave the cold in order to sample the food that I was subjected to during my year as an English teacher in the tiny post-Soviet Republic . Fittingly, it felt like we were walking through a deserted mountain outpost as we approached the restaurant, from Downsview station on a snowy Friday night.

I have a complicated relationship with the hearty meat and potatoes cuisine of the small nation sandwiched between Russia, Turkey, Armenia and Azerbaijan. When I first went to live there, it was the end of summer and I was blown away by the quality of the produce, the simplicity of the ingredients and the ever-flowing homemade wine that accompanied every meal.

The honeymoon was brief, however, and as the seasons changed, the already limited menu dwindled to a rotation of the same six or seven dishes at every meal. Now, two years removed, I've become incredibly nostalgic for those heavy, rustic dishes that got me through a savage winter.

Aragvi sits in an unassuming strip mall in North York. The decor is drab, and quintessentially Eastern European. A bar stocked with Georgian Wine and Ukrainian vodkas overlooks about six tables adorned with slate tablecloths and gaudy silverware. The room is small and dimly lit, but the atmosphere is warm and the servers are inviting.

Aragvi's menu is extensive, with a mixture of classic Georgian fare rounded out by some Russian and Ukranian plates thrown in to add a bit of variety. Although one of my friends was keen on the Chicken Kiev ($12), I took the reigns and ordered for the table. In order to lure my friends into coming, I promised them they'd leave the meal at least half-drunk.

Georgians are exceptionally good drinkers, and even better hosts, as evidenced by their traditional feast, which is called a supra . These regular events are massive parties taking place around a table that are interrupted for dozens of toasts to God, country, family, life and death, in which everyone at the table stands and downs their tumbler of wine in unison. Wine flows freely there, as every family with enough room to grow grapes makes their own.

So, I splurged on a bottle of wine upon arrival. We settled on a bottle of Mildiani Saperavi , ($45) a very drinkable, if one-dimensional fruit bomb that was met with indifference. Georgians have a pretty solid claim that they invented wine, but they haven't perfected it yet. For those on a budget, I'd recommend the surprisingly refreshing tarragon soda ($2). 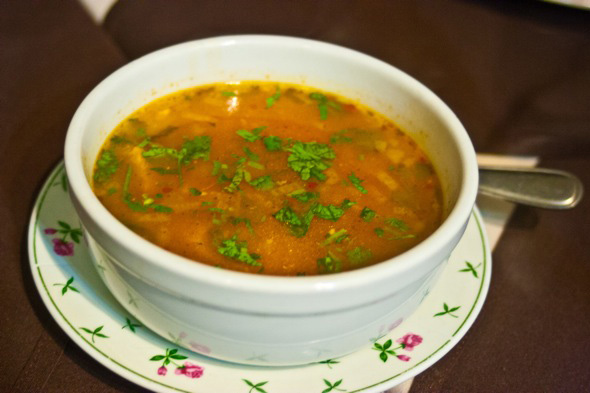 We started things off with a few bowls of Harcho ($5.50) which was one of my addictions in Georgia. It's a spicy lamb soup with a fatty broth thickened with broken rice kernels. I was impressed by the addition of tender Ontario lamb, which was a nice change from the chewy miscellaneous hunks of beef that I'd often find swimming in some of the country's sketchier roadside taverns. 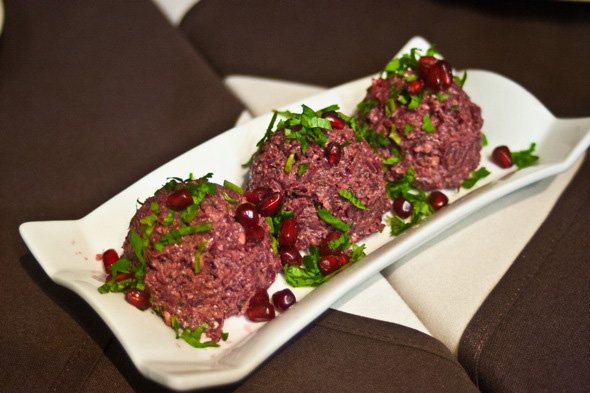 On the side we had the Pkhali ($7.50), a mixture of beets and walnut-paste seasoned heavily with coriander, sprinkled with pomegranate and diced cilantro and that looked a bit like psychedelic meatballs.

We also split an order of Georgian Pickles ($4.50), a winter staple. The green tomatoes were the highlight, with an intense sourness that cut through the sweetness of our table wine. The pickled peppers came in second but the pickled eggplant was a disaster. Despite being lovingly sprinkled with shaved carrot it had the texture of a dry kitchen sponge. 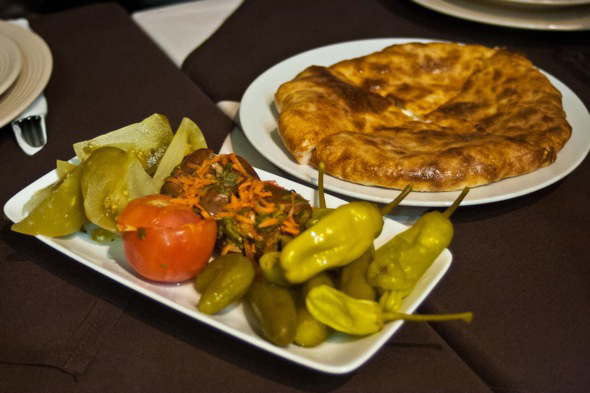 Sitting next to the pickles was the true highlight of the meal. Khachapuri ($8) is arguably the national dish. I opted for the sensible iteration, from the Imereti region , which is a savoury pastry stuffed with salty sheep's milk cheese, slathered in butter and cooked in a kiln. Of all the dishes we had, this was the only one that improved upon the original. I must have eaten a hundred of these in Georgia, but this perfectly balanced mixture of rich dairy and light flaky pastry was unquestionably the best. I'd splurge and order the large.

For those more adventurous, the Adjarian Khachapuri (also $8) is worth a try. It's a cholesterol bomb that I've yet to see anyone successfully finish. It's shaped like a boat, and stuffed like a Chicago deep dish pizza with two inches of cheese, topped with a freshly cracked egg and half a stick of butter.

Next up we had Lobio ($7.50 - top photo), which are beans cooked with curry-like spices in a ramekin. When I was living in Georgia, lobio were our intestines' saving grace in the land where white bread is king, and often our only source of fiber when traveling in the countryside. Unfortunately, the version served at Aragvi were bland and soupy, and the price is too steep for such a simple bean dish. 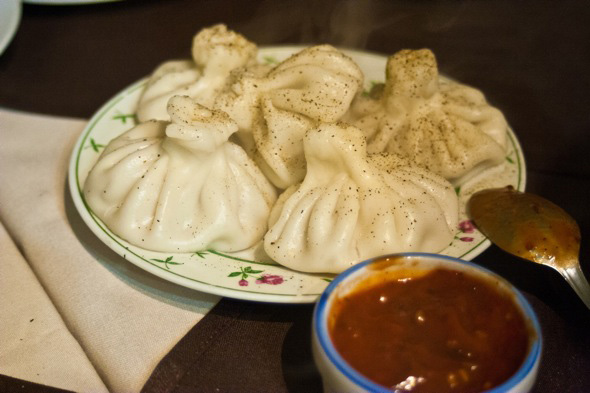 At this point, I was a few glasses of wine deep, and I forgot that we had ordered a six-pack of Khinkali ($1.35 each). These gorgeous little soup dumplings, stuffed with coriander and cumin spiced minced lamb and onions, are the ultimate beer fuel. They're fun to eat, too.

First, sprinkle the dumplings liberally with pepper and grab the dumpling by the nub at the top. Bring it to your mouth and take a small bite on the side. Next, suck the juices out, making absolutely sure not to spill and quickly gobble the remains. Remember not to eat the little nub, as leaving them on your plate is a sign of prosperity. I've had many a drunken debate with locals about the origin of Khinkali as they bear a striking resemblance to Shanghai Soup dumplings. 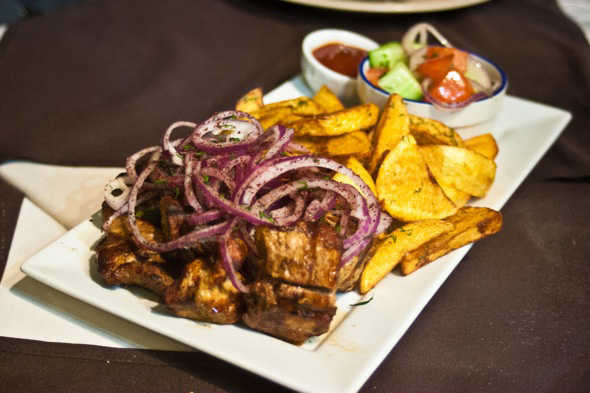 Aragvi has an extensive section of grilled meats, but in Georgia, the pig is king, and I insisted on the Pork Shish kebab platter ($11). Served with simply baked potatoes and a side of the ubiquitous staple cucumber and tomato salad, these juicy, fatty hunks of pork rib, marinated in vinegar and onions were a simple, satisfying end to a heavy meal.

Aragvi is super authentic, and for many, the best chance to sample the food of this ancient underrepresented nation in the GTA. Bring your friends and an open mind, because you might get lucky and stumble in on a supra. Don't be shy. Georgians are some of the most hospitable people in the world.