Apiecalypse Now has become well-known for serving some of the most epic, totally vegan pizza in Toronto.

Since their beginning years ago they’ve expanded into vegan baking and products like sauces, and this spot marks their second ever location. 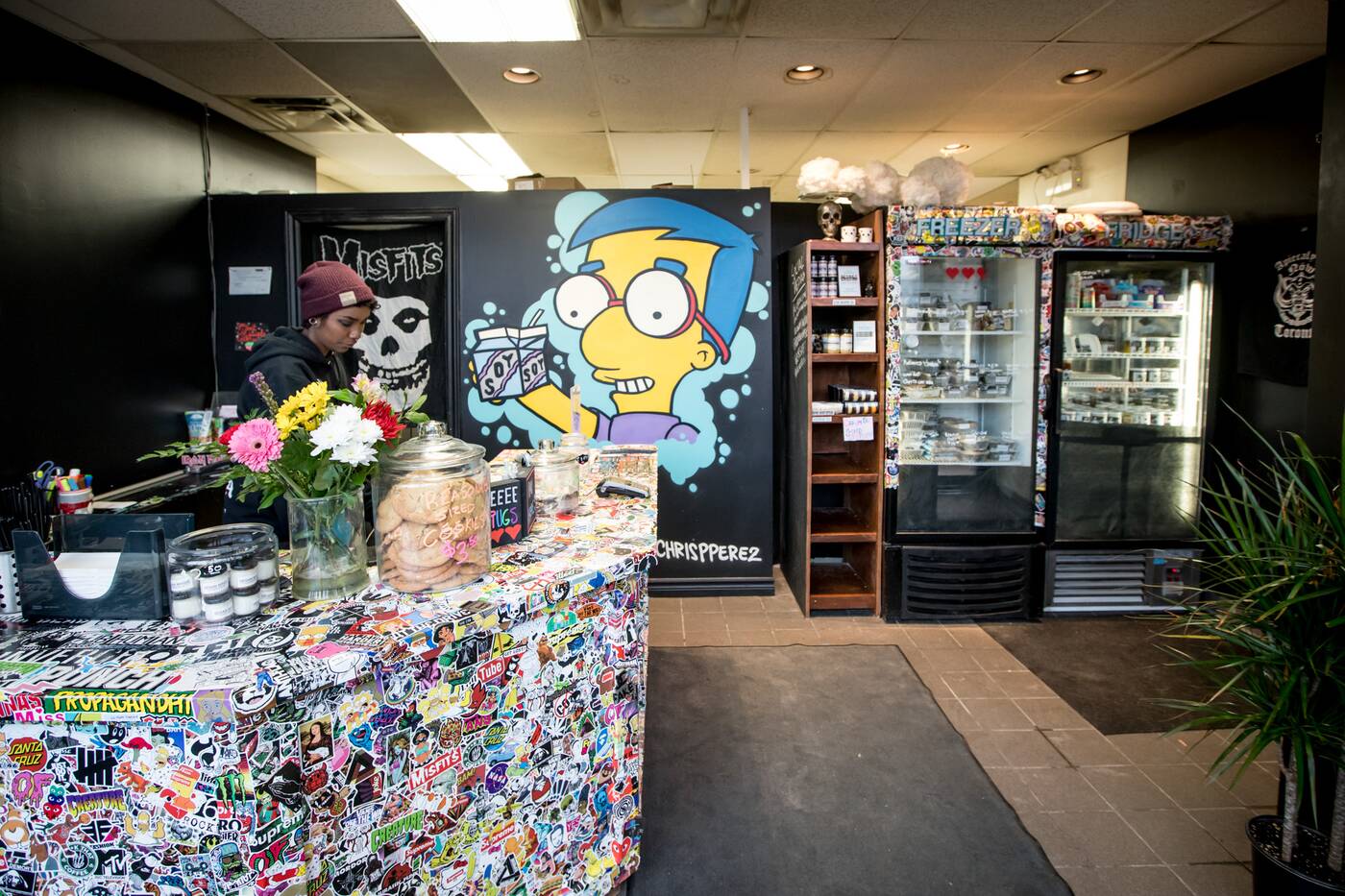 If you’ve ever been to the location across from Christie Pits you know the joint has a punk aesthetic, and even if you haven’t you might have guessed from the name.

The counter is coated in stickers, a mural by Chris Perez shows a giant Milhouse sucking down soy milk, and signs offer free shrugs and remind you not to gender the staff.

It’s a lot smaller than the other spot though, pretty much only a takeout place with no real seating or table space to speak of, just a bench in the corner suitable for waiting. They do however manage to cram a decent amount of product into shelf, fridge and freezer space. 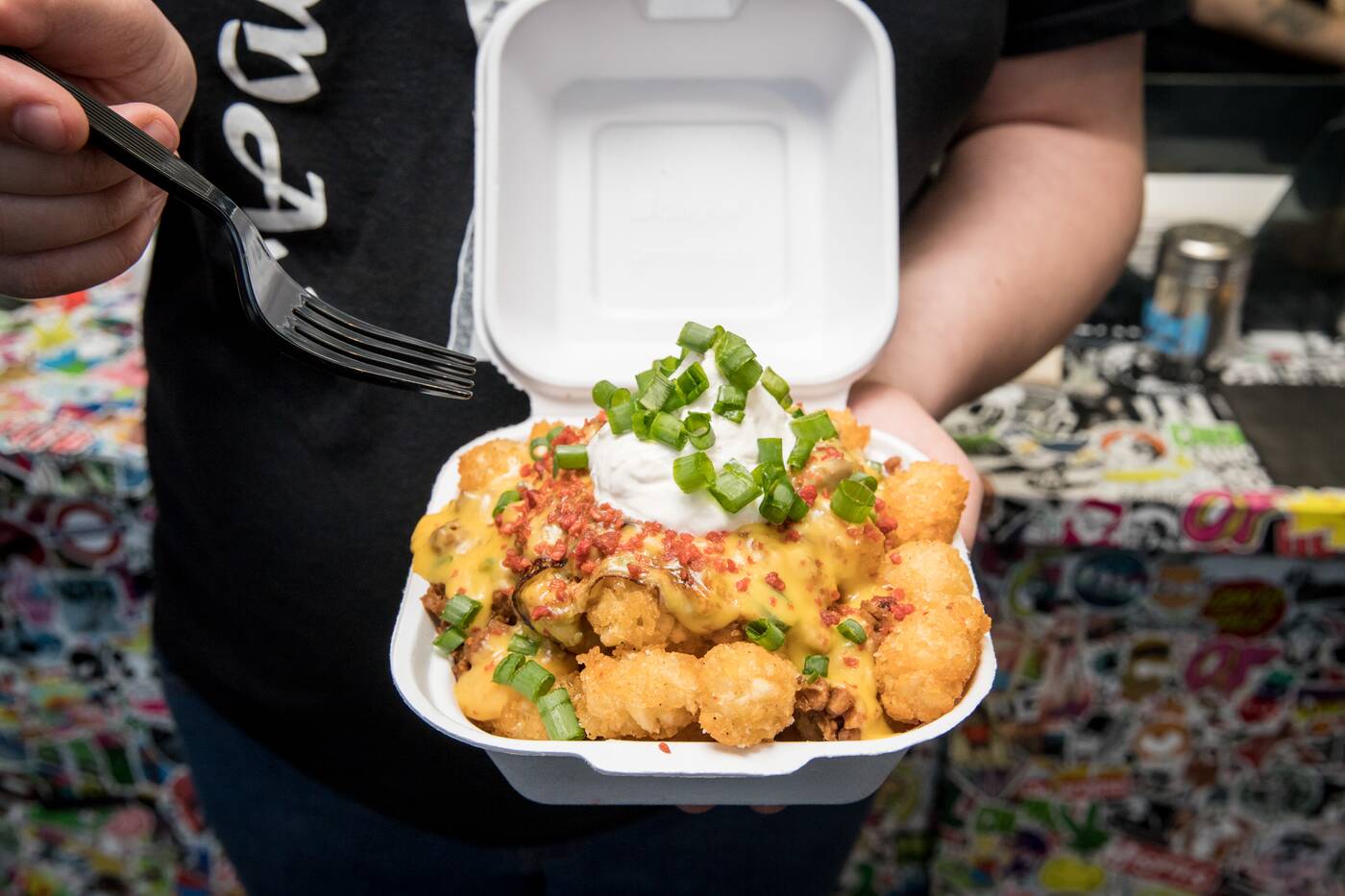 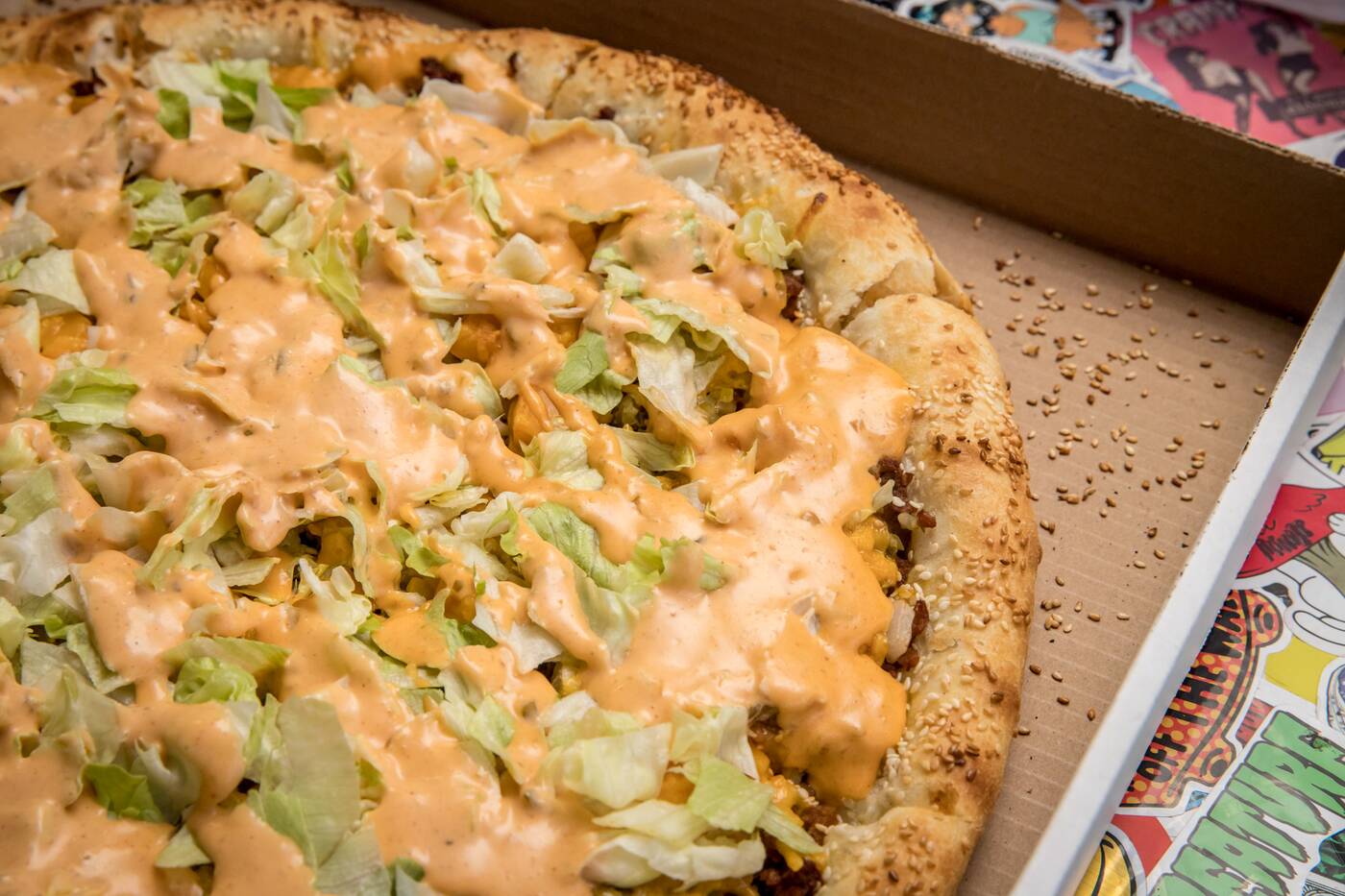 A Fat Mac pizza will set you back $27 for a large, but it’s not your average pie in so many ways. It’s basically a vegan version of everything on a Big Mac, but on a pizza: you can literally sing the song to check off all the ingredients.

The crust is sprinkled with sesame seeds just like a burger bun and topped with Veggie Ground treated with garlic powder, Kosher full sour dills blasted to a relish, vegan cheddar, Daiya shreds and their own reverse-engineered vegan Mac sauce.

The shockingly accurate imitation has a base of veganaise (the only thing not made from scratch) with about 16 other ingredients. 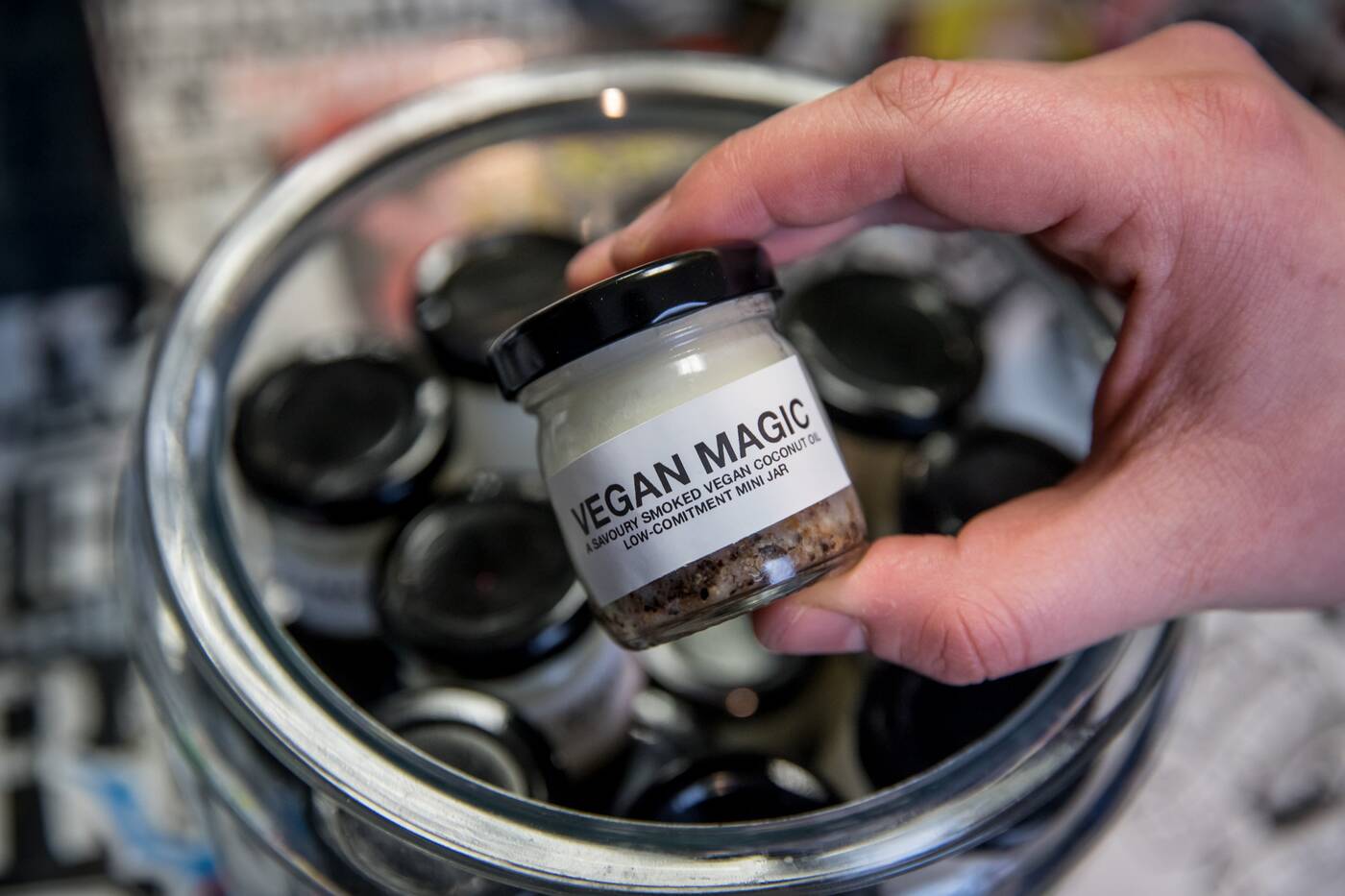 Tinier jars of the same Vegan Magic from the fridge are available for $2.50 at the counter, making it easy to give vegan cooking a try without being stuck with buying a large amount of an expensive product you’ve never used before. 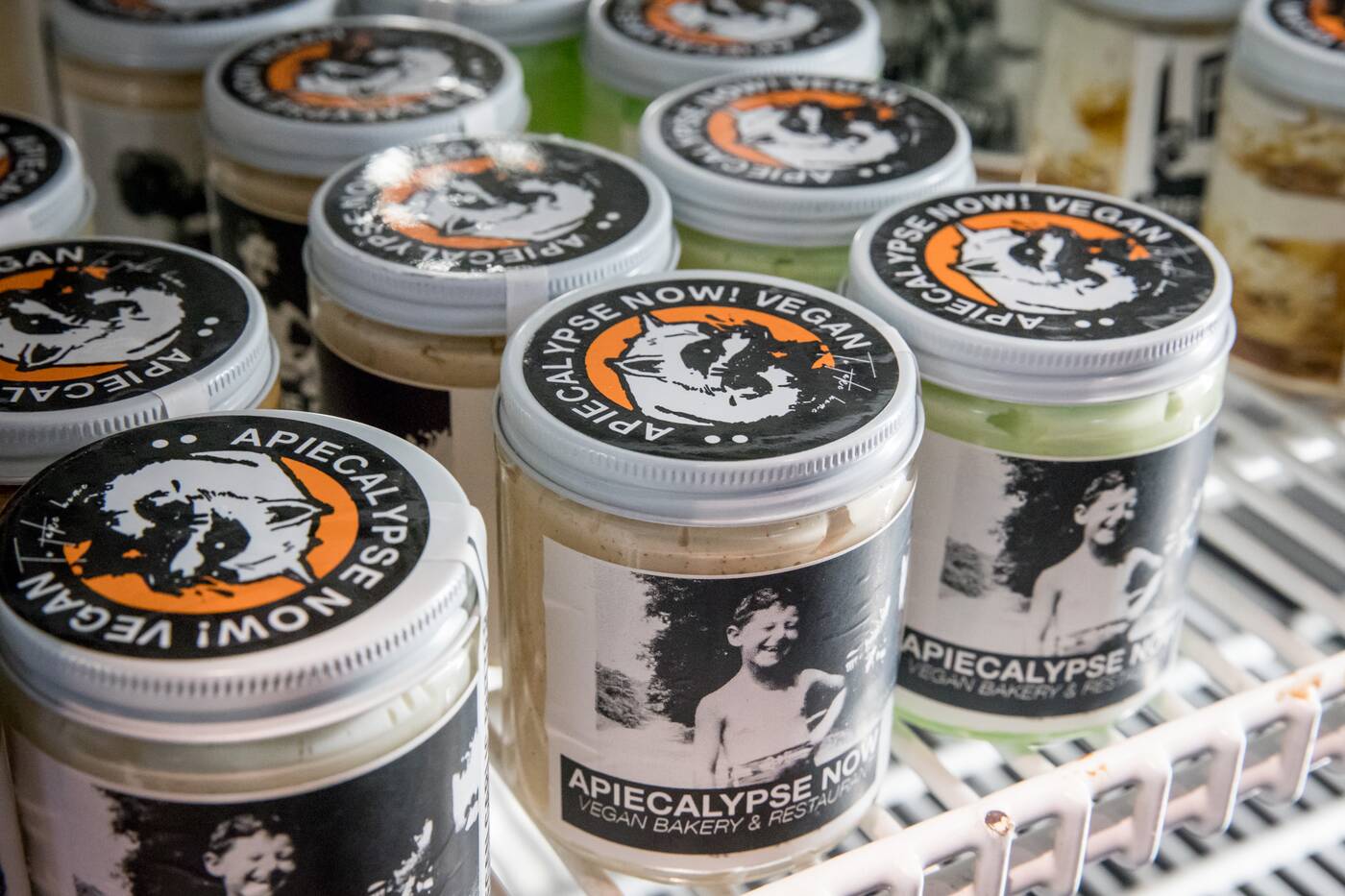 A wide range of their vegan butters ($6.50) are available in the fridge too, in appropriately zany flavours like fudge, wasabi, pumpkin spice, tomato garlic and cinnamon sugar. 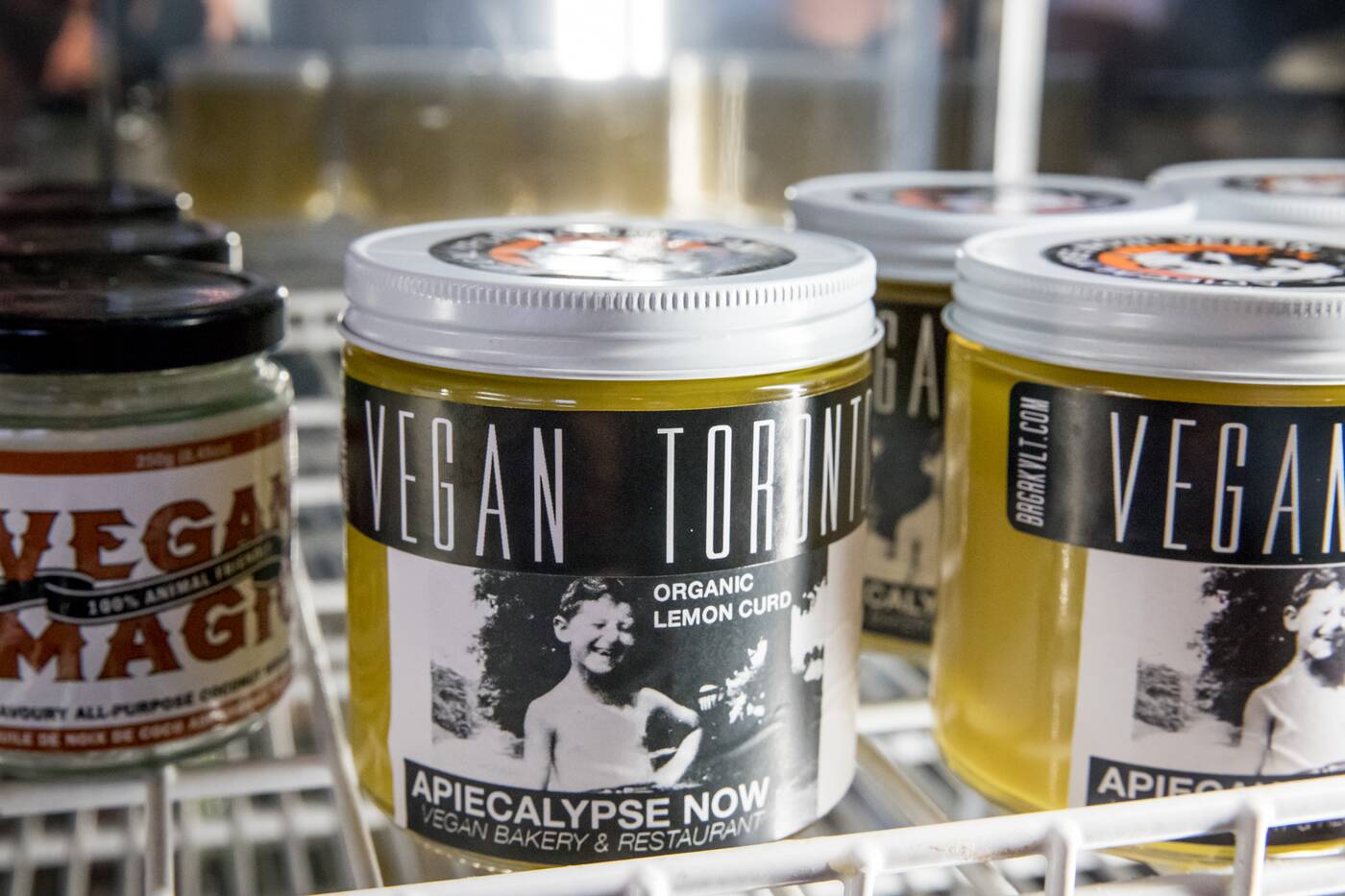 They also stock an organic lemon curd ($8) and even tubs of their vegan buttercream frosting. 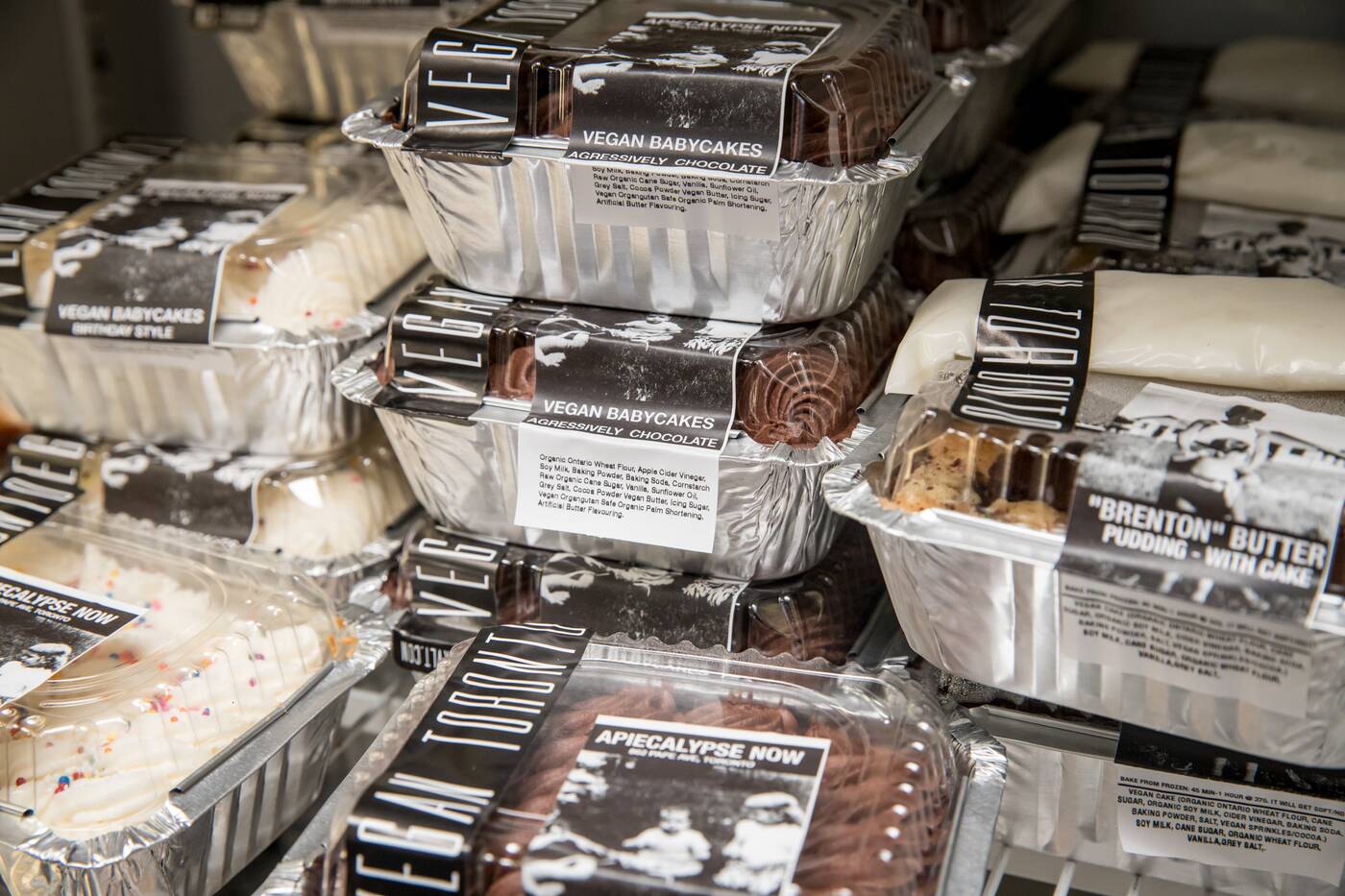 Baby cakes ($6.50) come in flavours like birthday and “aggressively chocolate.” 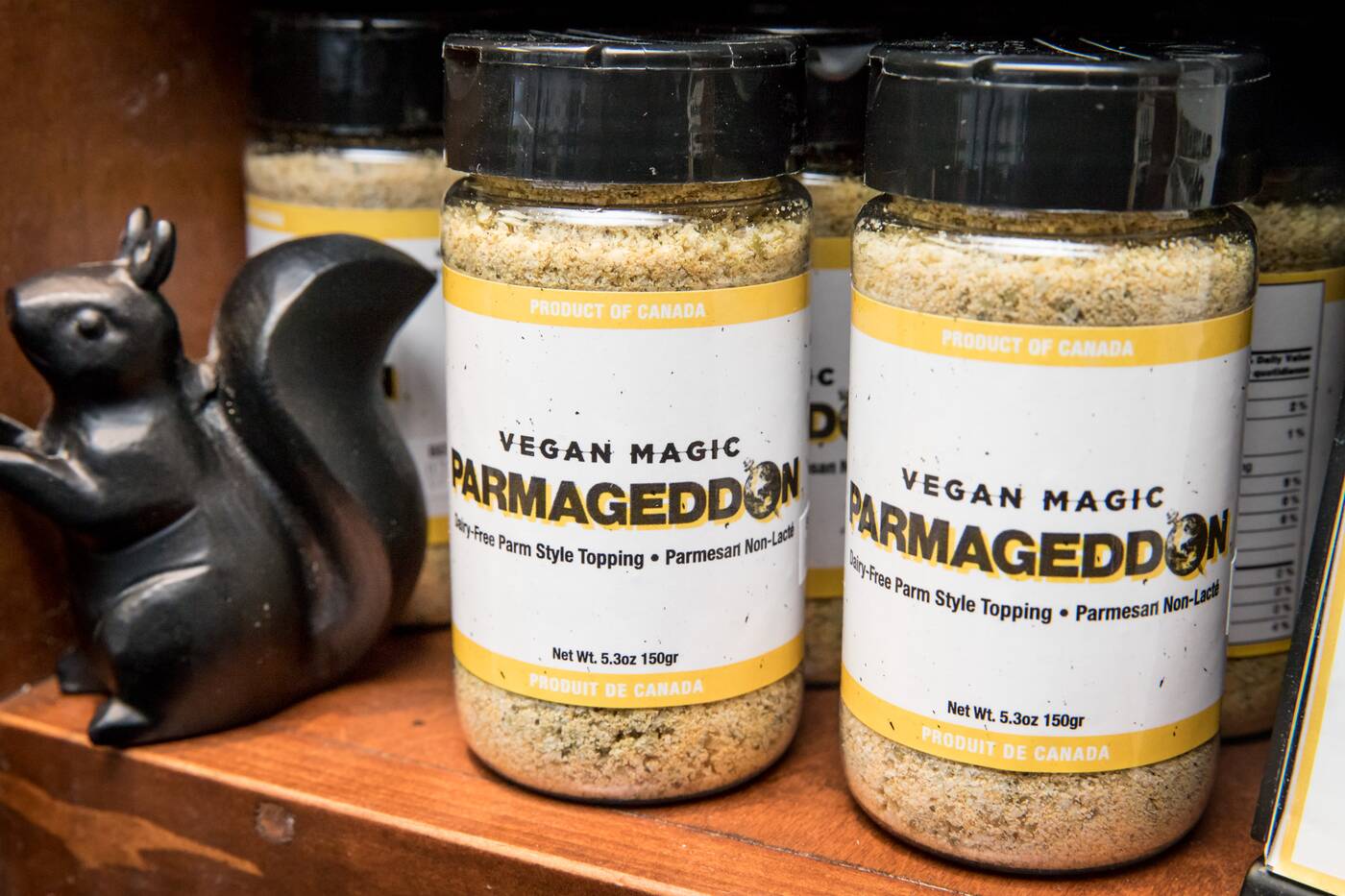 They’ve got other Vegan Magic products too like a dairy-free parm; so necessary with pizza! 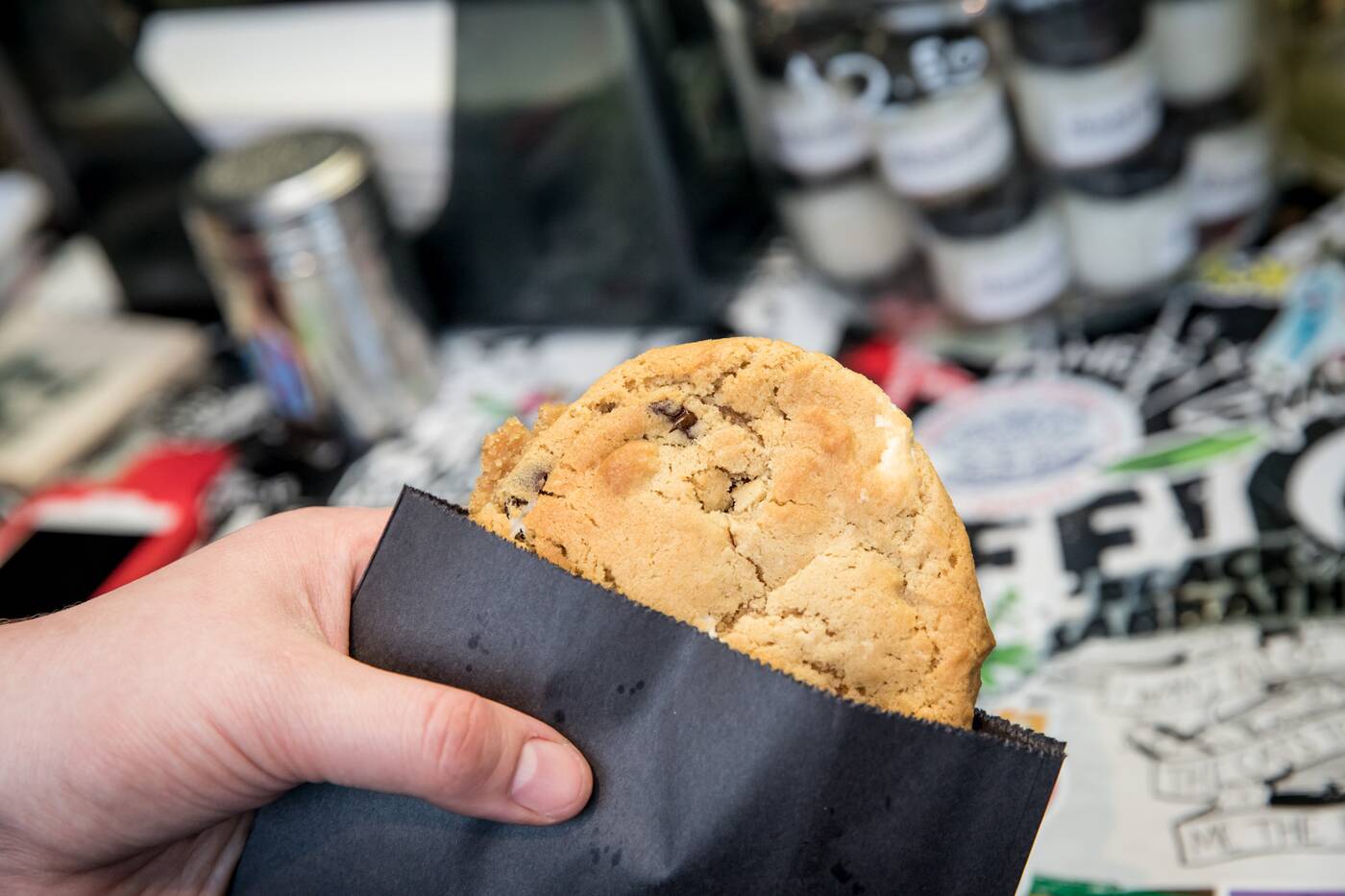 This should eventually function as a commissary space for all their baked goods including legendary vegan donuts. 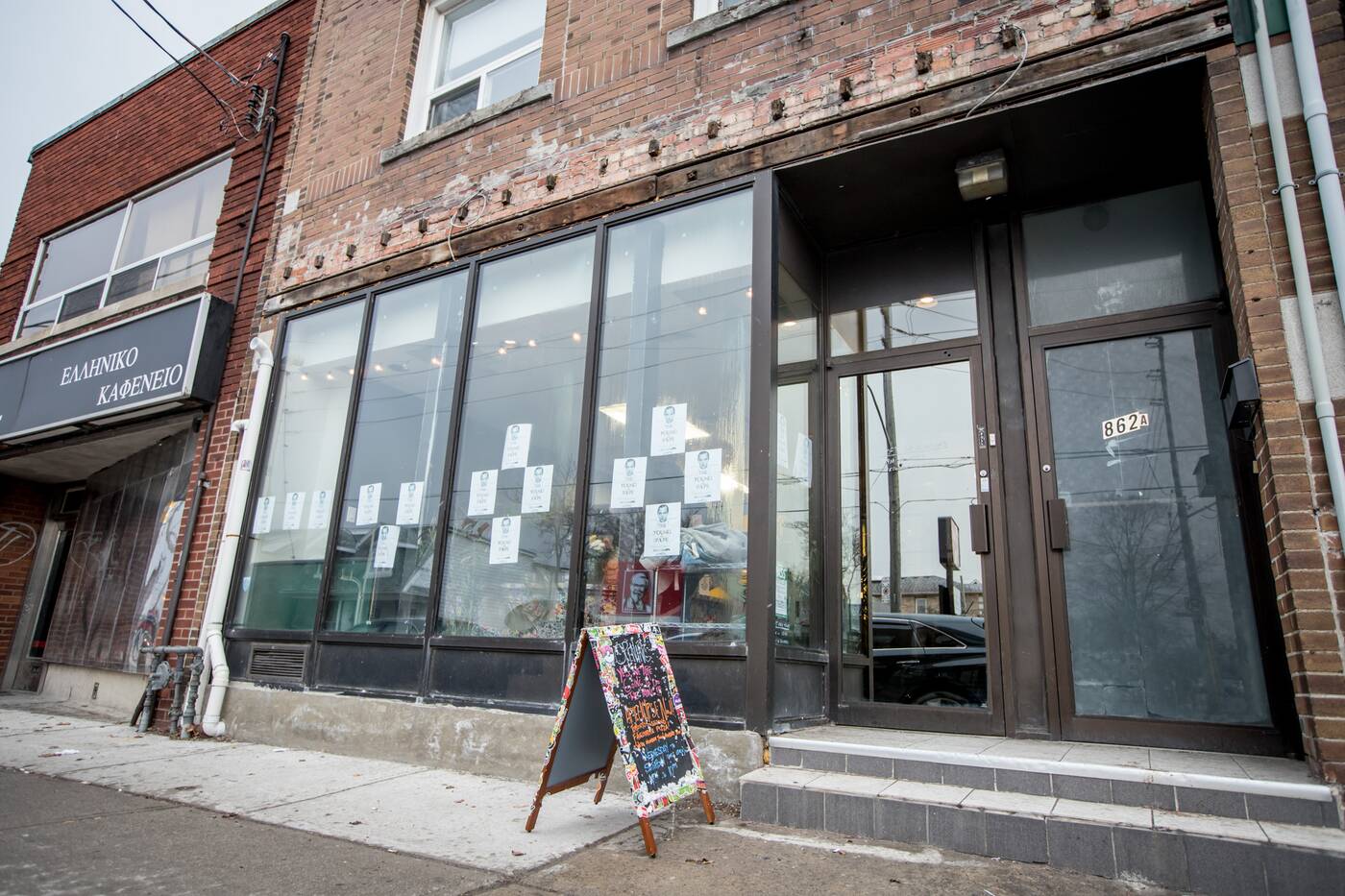