The Anne Boleyn is a modern British pub brought to us by The Social Group, the same folks behind Parts & Labour, Dog & Bear, and Ace Hill beer. 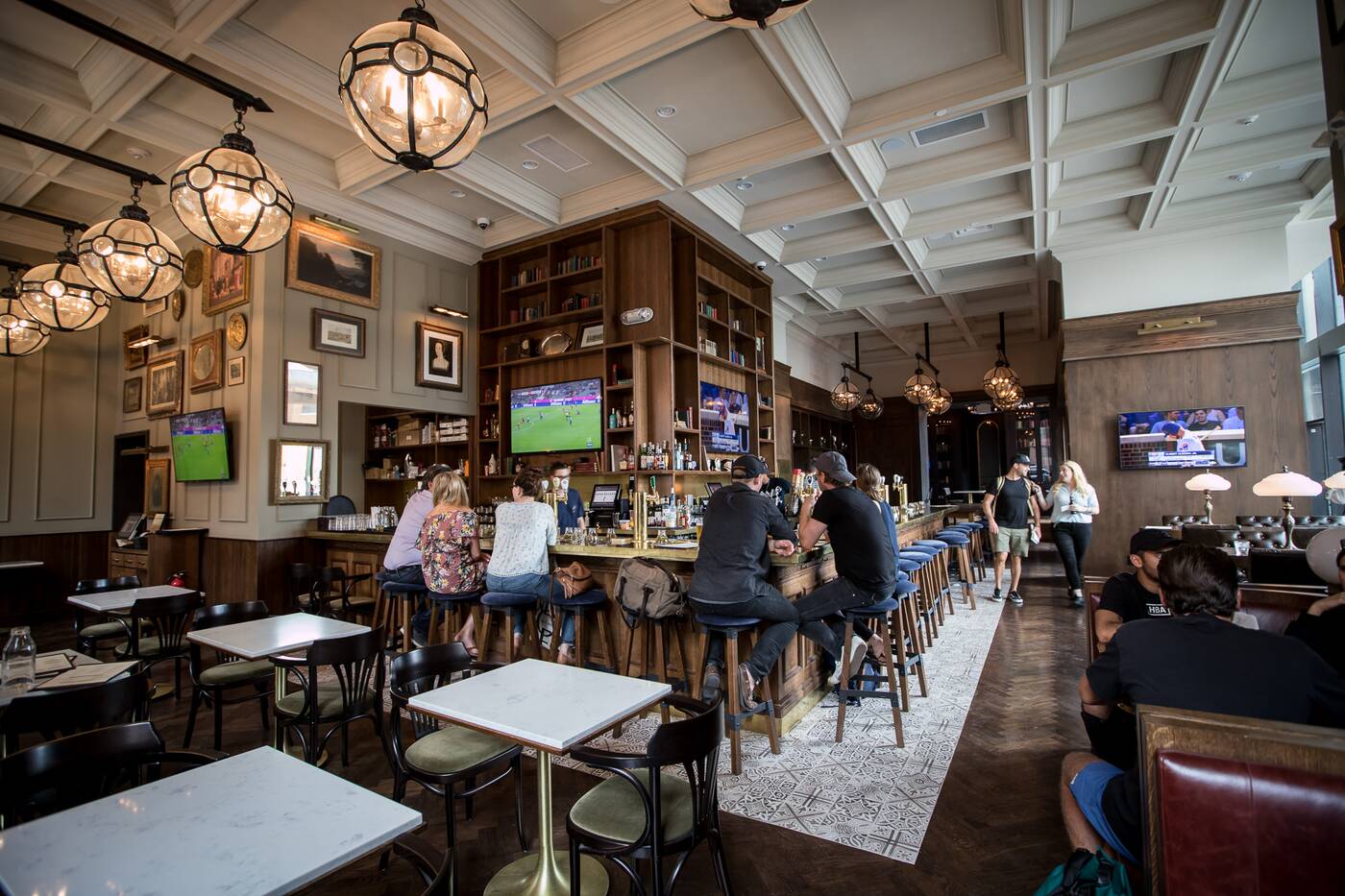 Open at 11 a.m. on weekdays and earlier in the morning on weekends, the all-day establishment is 4,200 square feet and can accommodate over 200 people. 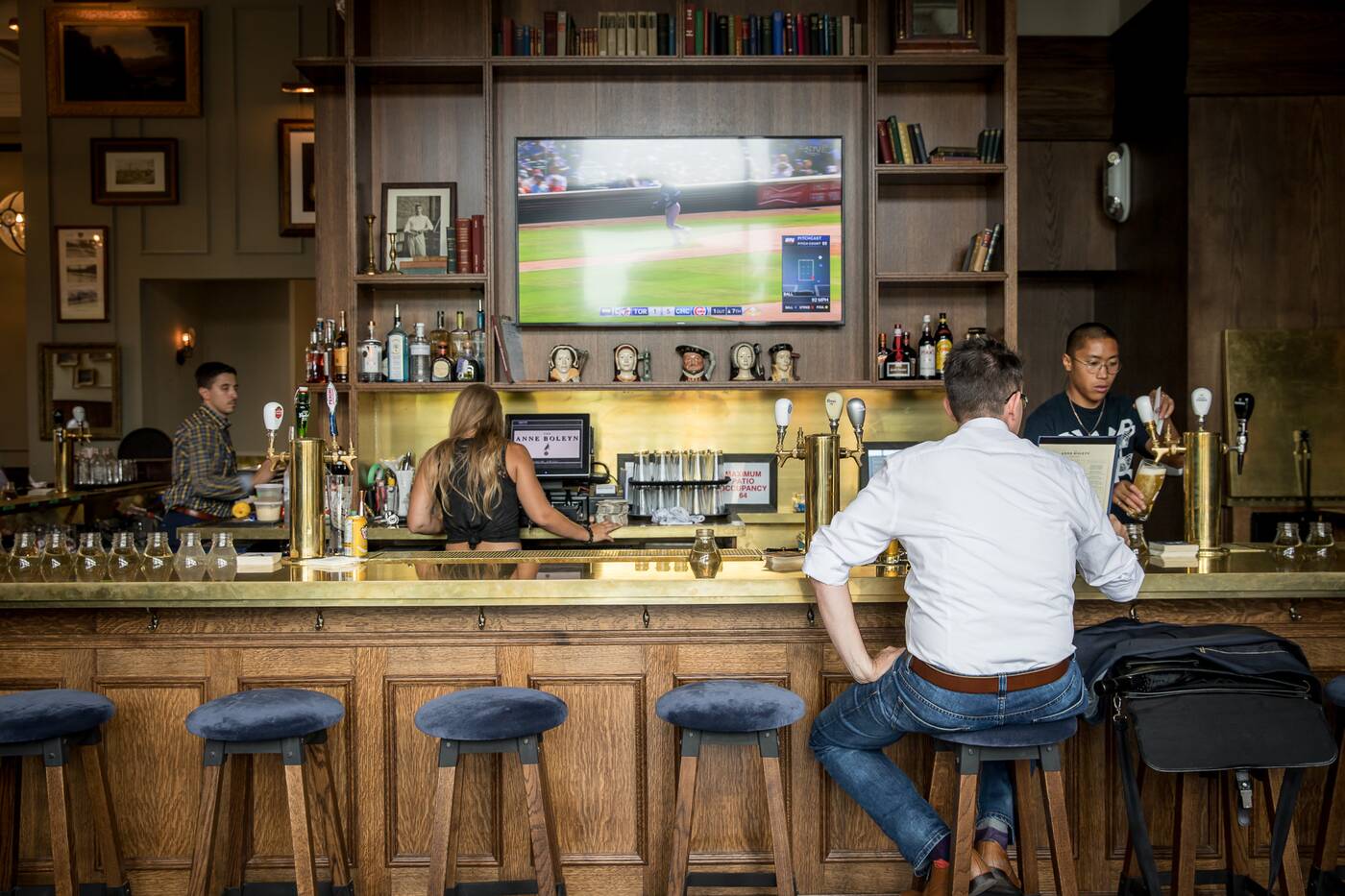 This includes seating in comfy booths, plush bar stools, and luxe-feeling tables, as well as out on a patio. 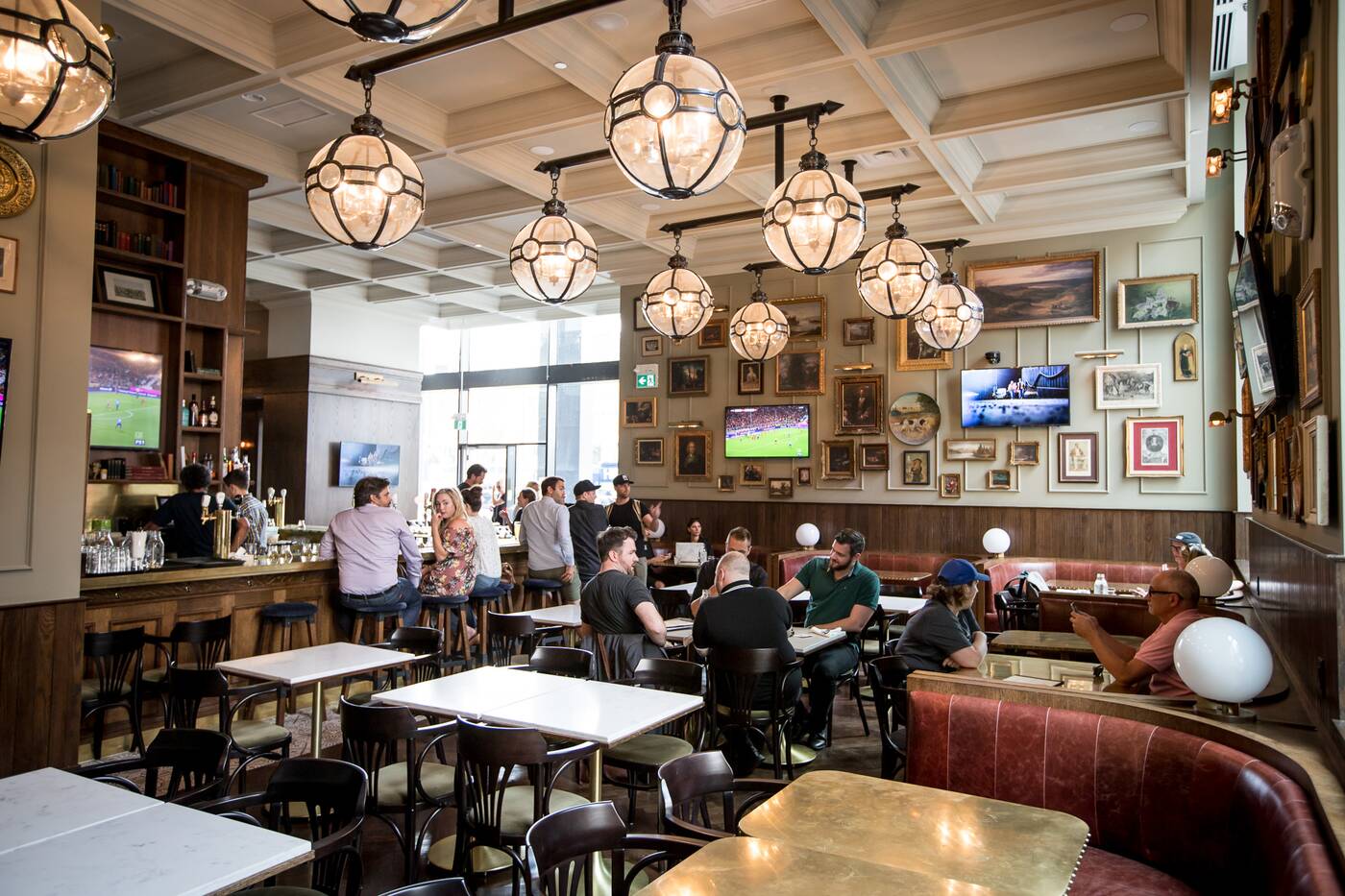 Inspired by the upscale Berners Tavern in London, the space was designed by Lisa Ho Studio and Steven Fong Architect. They started from a blank concrete box, though you’d never know it from the gorgeous drop ceilings, tons of wood and brass, and light fixtures that harken back to a different era. 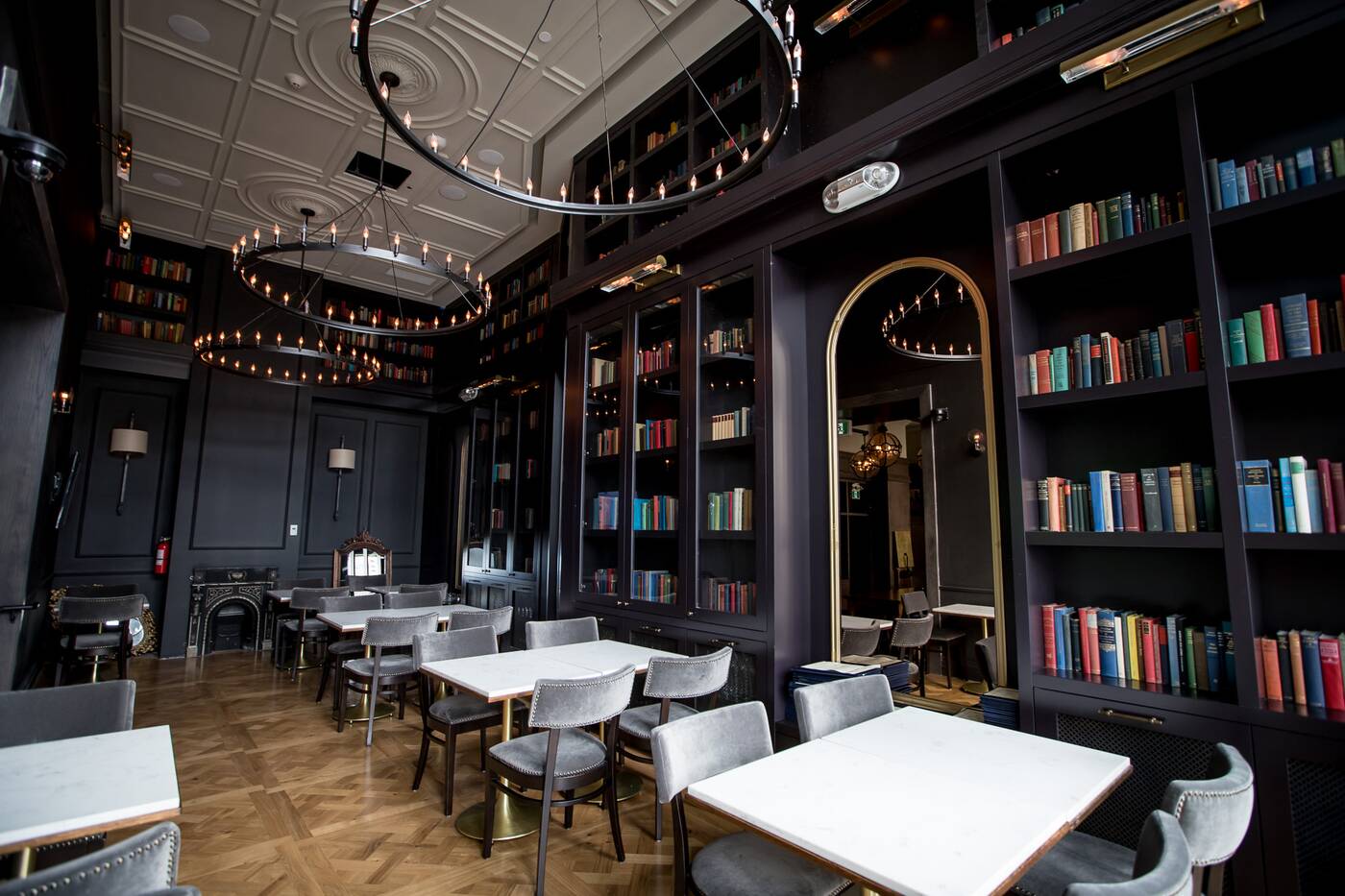 A library space is filled with real books with quirky titles. 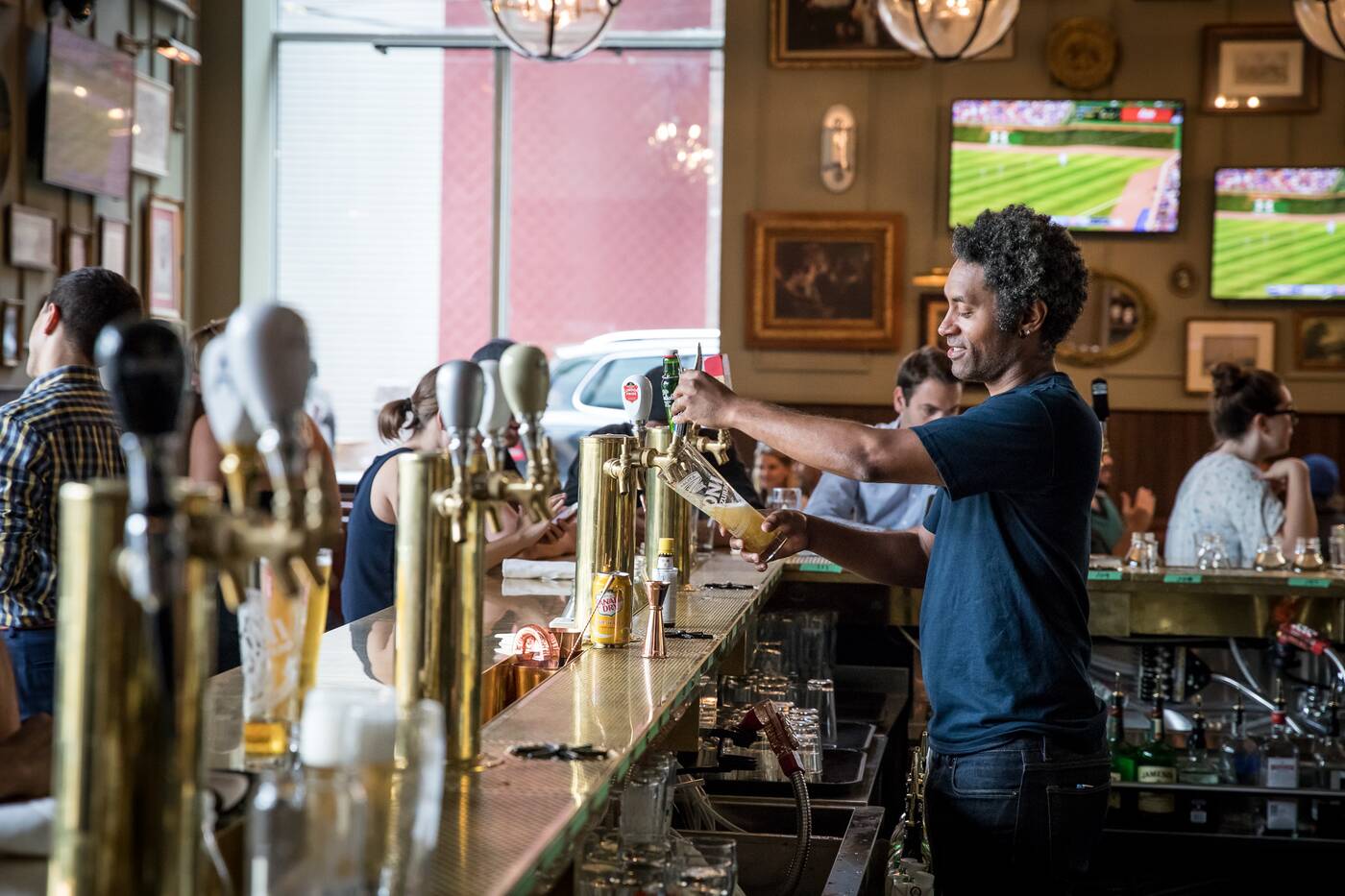 The bar boasts 28 taps, of course including Ace Hill, and other local brands like Woodhouse as well as international craft offerings like Lagunitas. 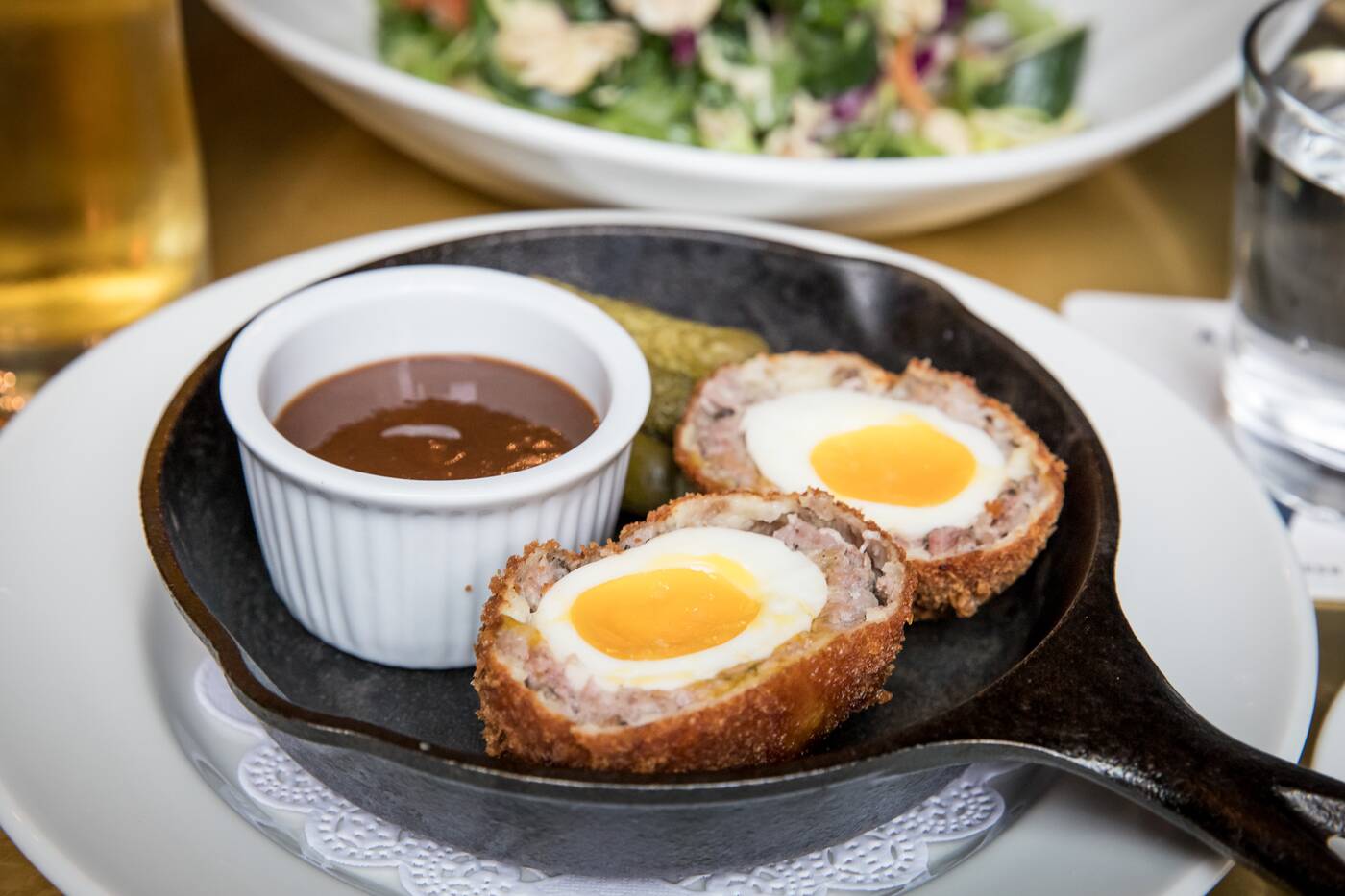 A menu designed by Chef de Cuisine Brent Piersens of Parts & Labour is brimming with English standards like a substantial and reasonably priced scotch egg ($6), along with other snacks like cheese or mushroom toasts ($8), or devilled eggs ($5). 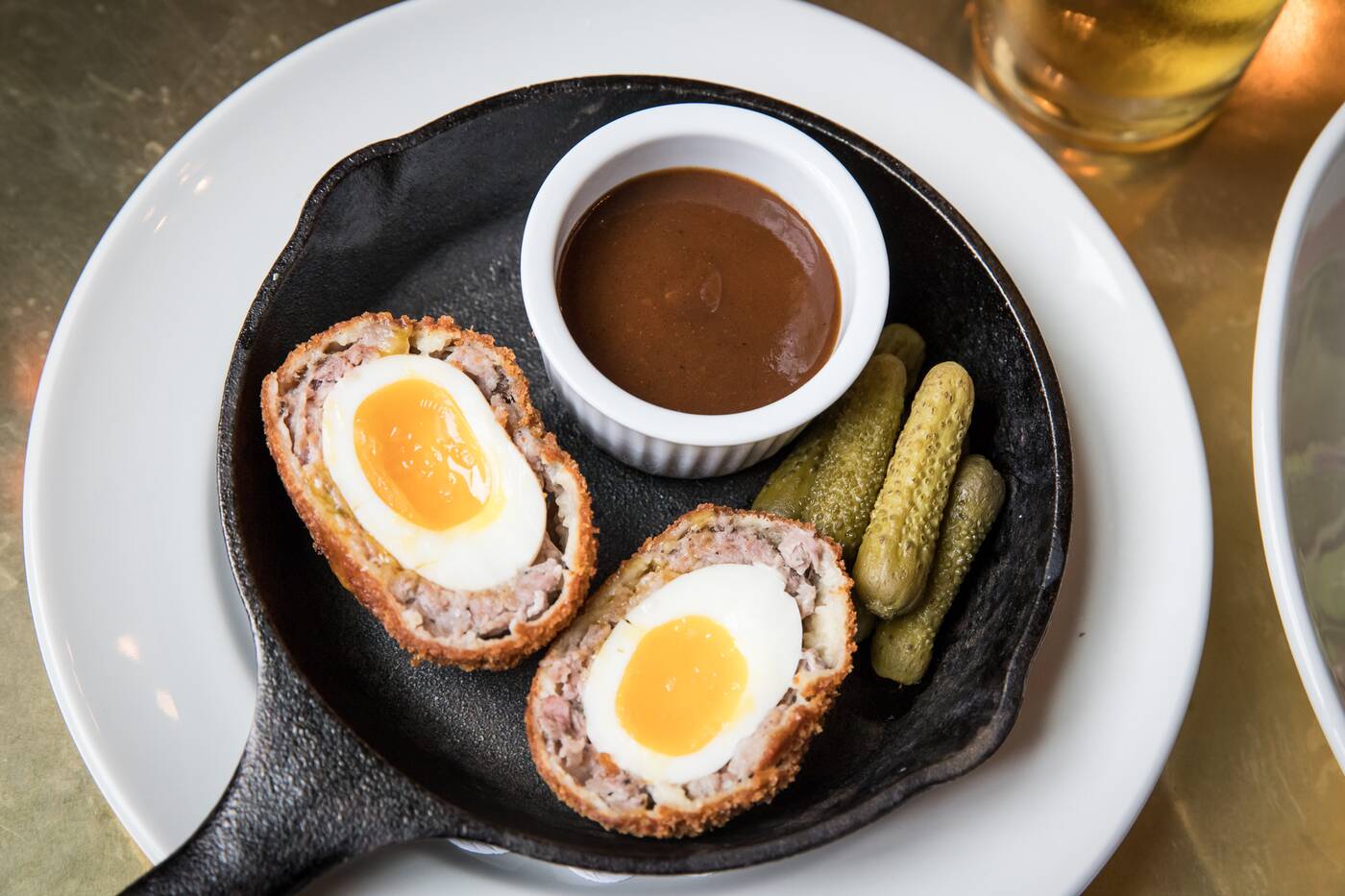 A classic zesty, malty brown sauce really makes it, and the egg is nicely soft-cooked wrapped in pork sausage, served with some pickles for crunch. 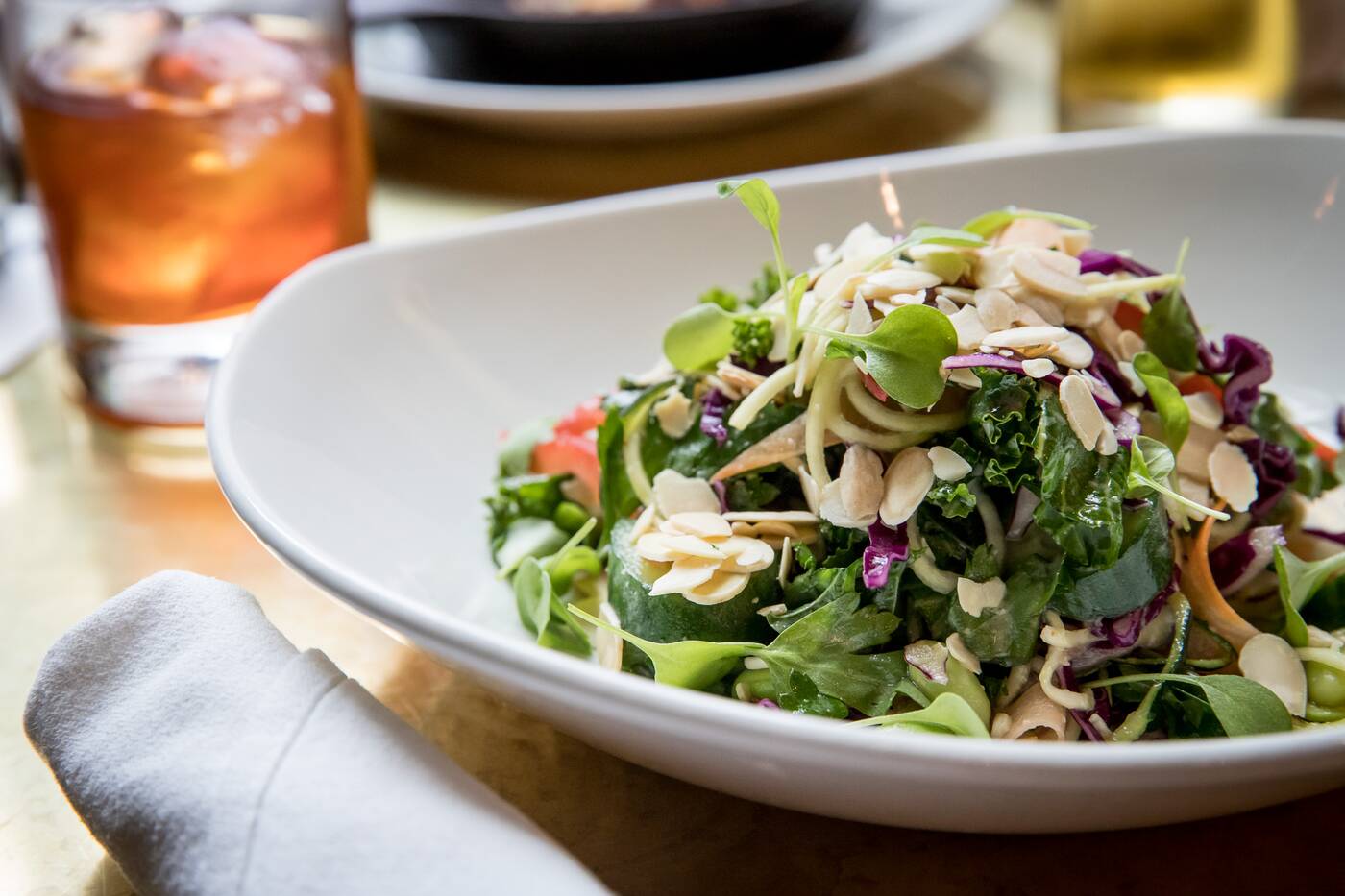 A zucchini noodle bowl ($14) veers in the other direction slightly less successfully with inconsistent cuts on lengthy noodles and julienned red peppers, though the combination of ingredients like edamame and almond is fun, and the miso dressing is tasty. 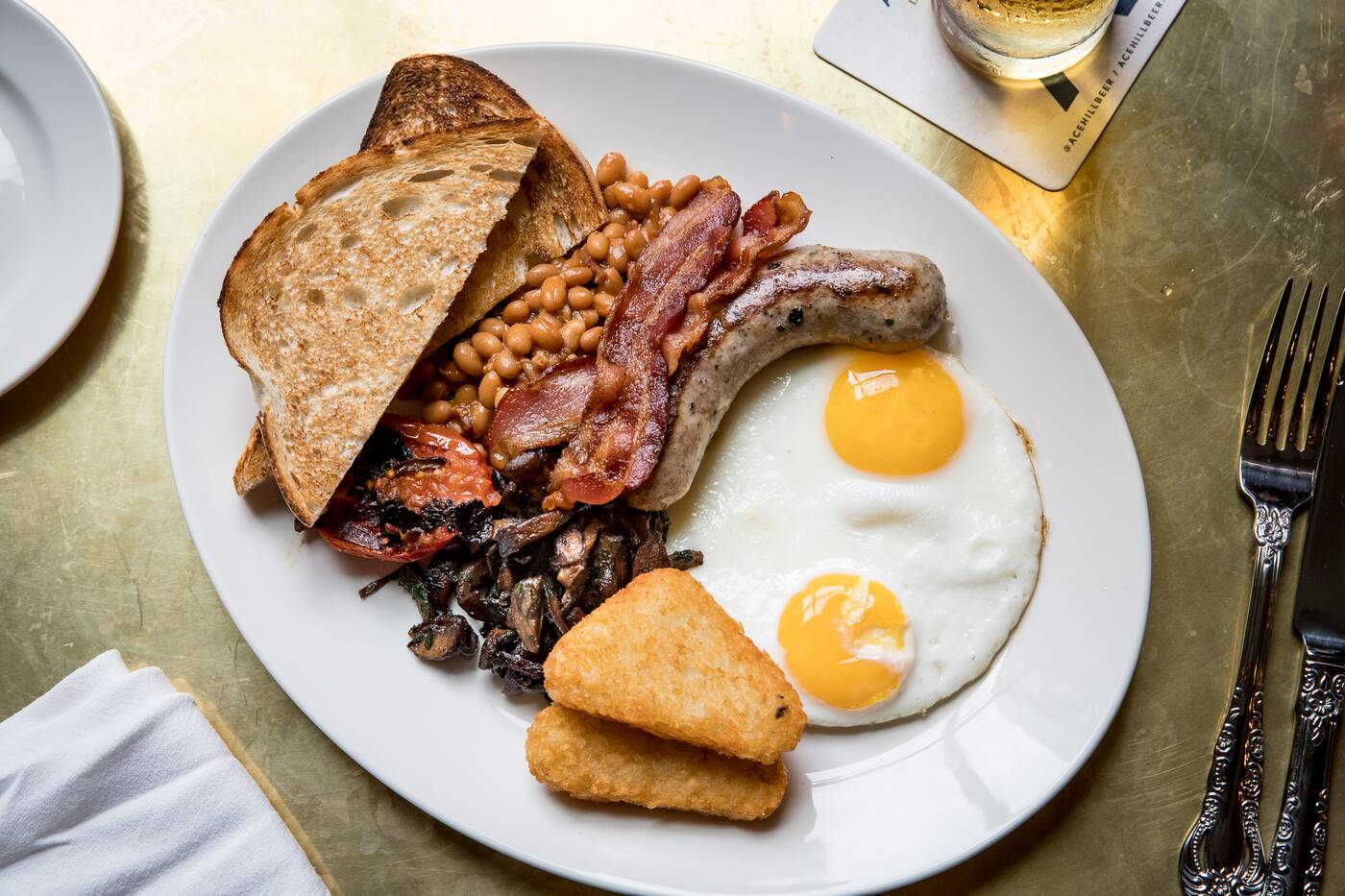 A full English breakfast ($17) is available until 3 p.m. along with bangers and mash, pot pie, fish and chips, and other stick-to-your ribs hangover cures. This plate has two fried eggs, bacon, yummy seasoned pork sausage, beans, mushrooms, tomato, and hash browns and toast. 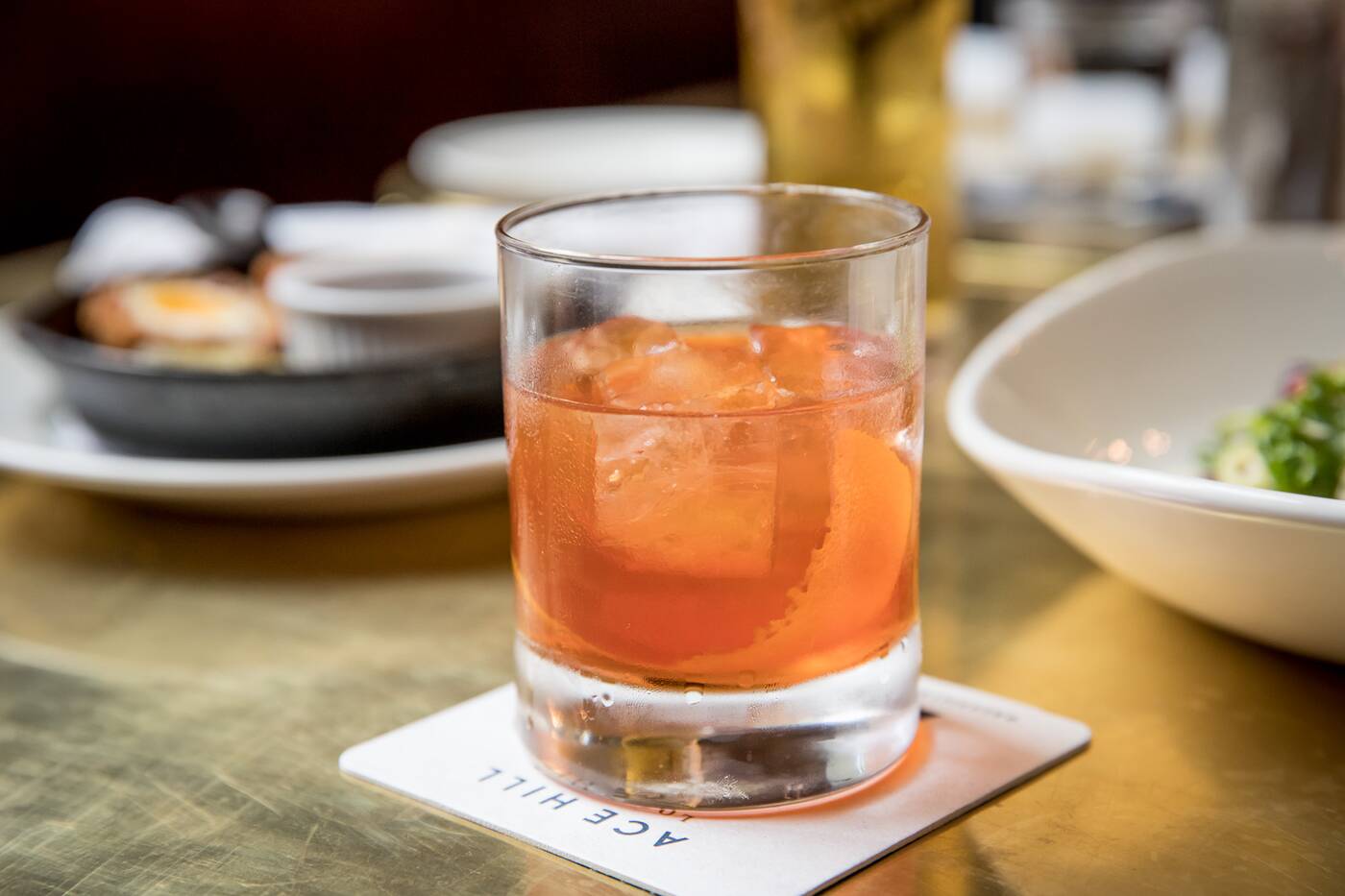 An old fashioned ($12) is nothing to write home about, but a straight-up combo of Woodford bourbon, simple syrup, bitters, and orange zest is never unwelcome at the pub table at the end of a long day. 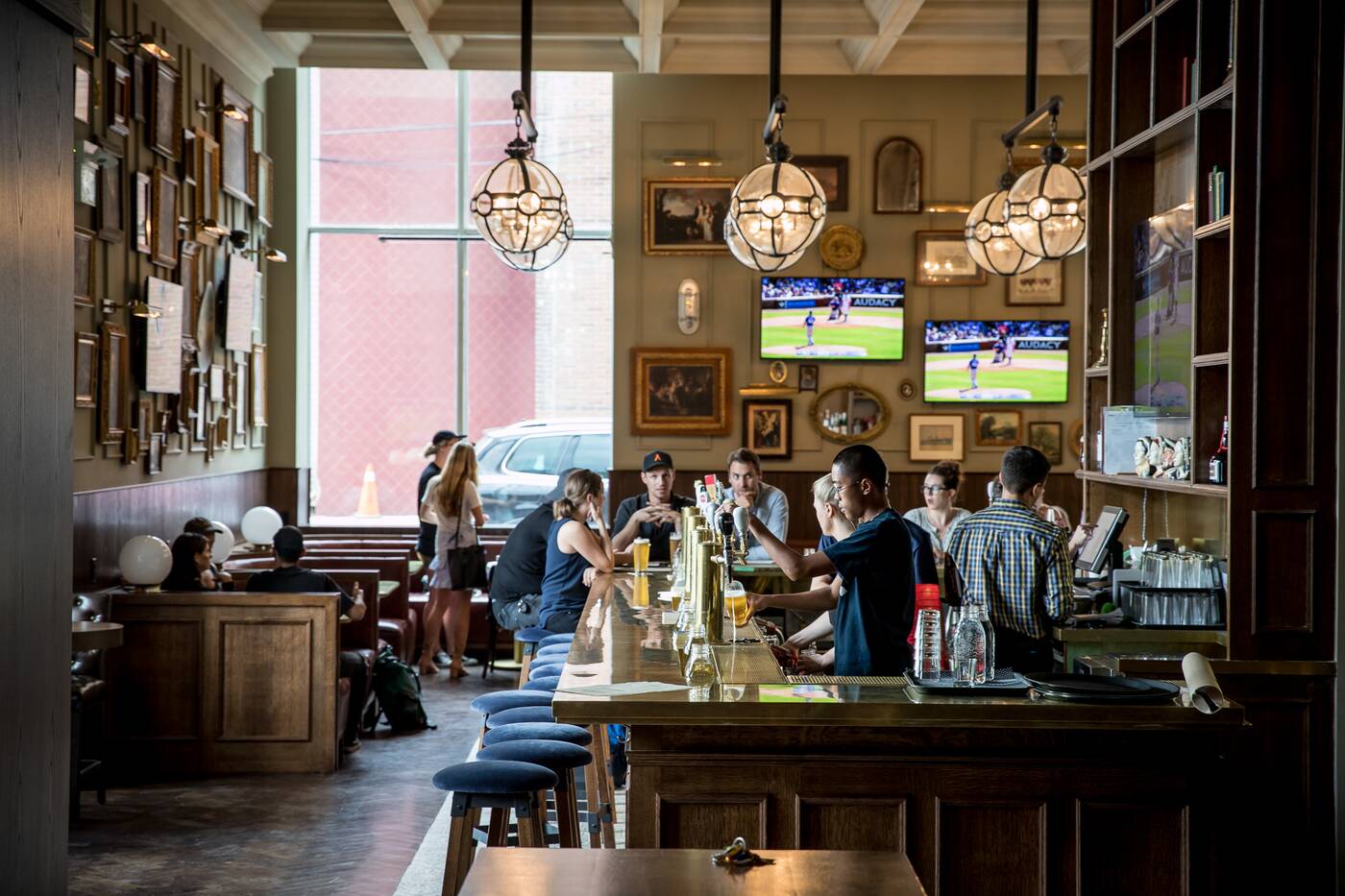 Richard Lambert of the Group grew up in his father’s real English pub, the original Dog & Bear, and has always wanted to bring a space with that traditional feel to Toronto.

He and partner Jesse Girard have succeeded, and nearby office workers, condo dwellers, movie goers, and night owls will surely be thankful. 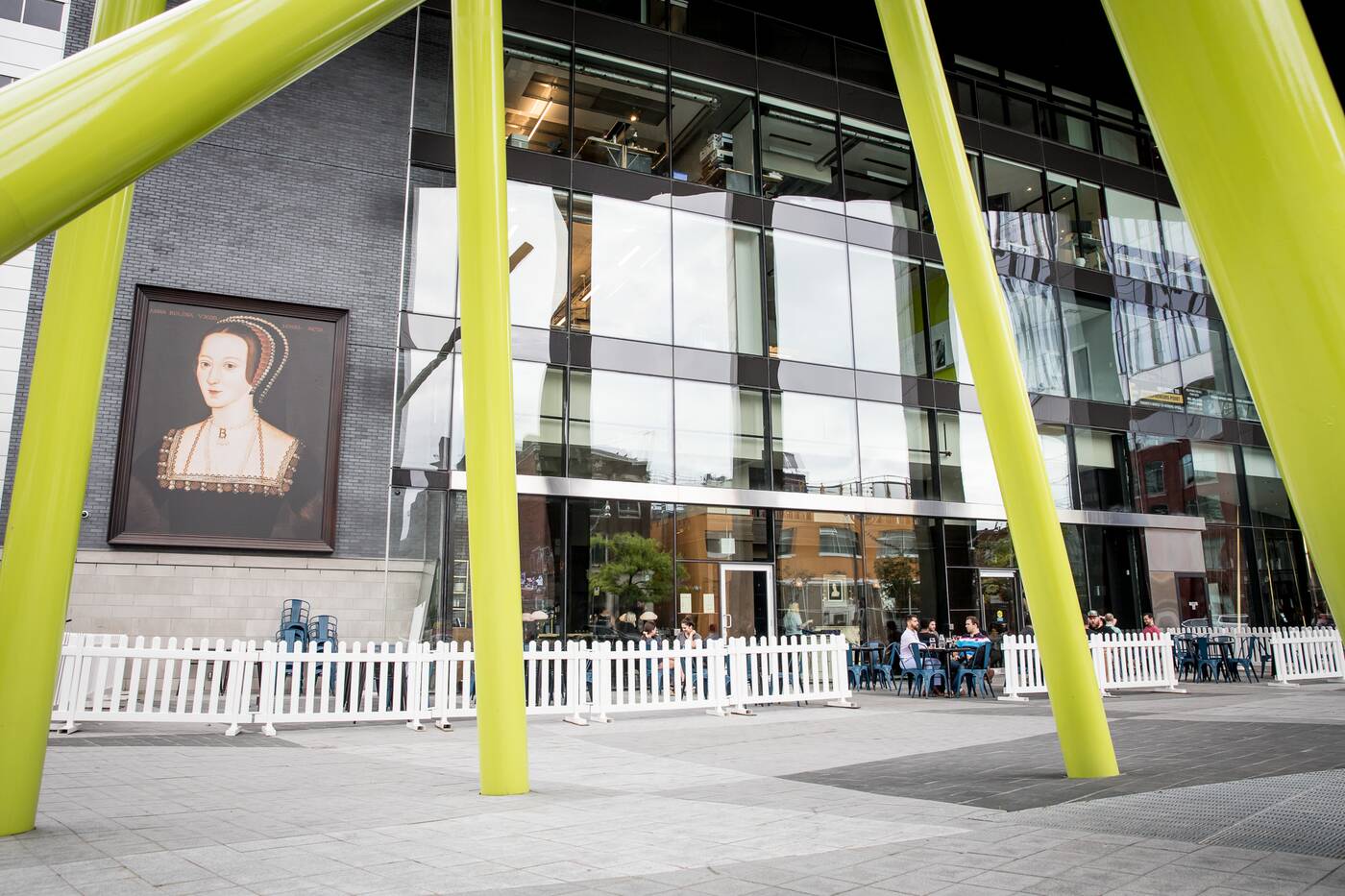