Anglr is a restaurant serving seafood and vegetarian options like clam chowder, shucked oysters, and fish and chips, alongside a few Asian-inspired dishes like handmade dumplings and cauliflower in a sweet Korean glaze.

The pescatarian restaurant, named after both the fisher and the fish, joins a couple of other seafood spots in the neighbourhood like Eastside Social and Reliable Fish & Chips a few blocks over on Queen East. 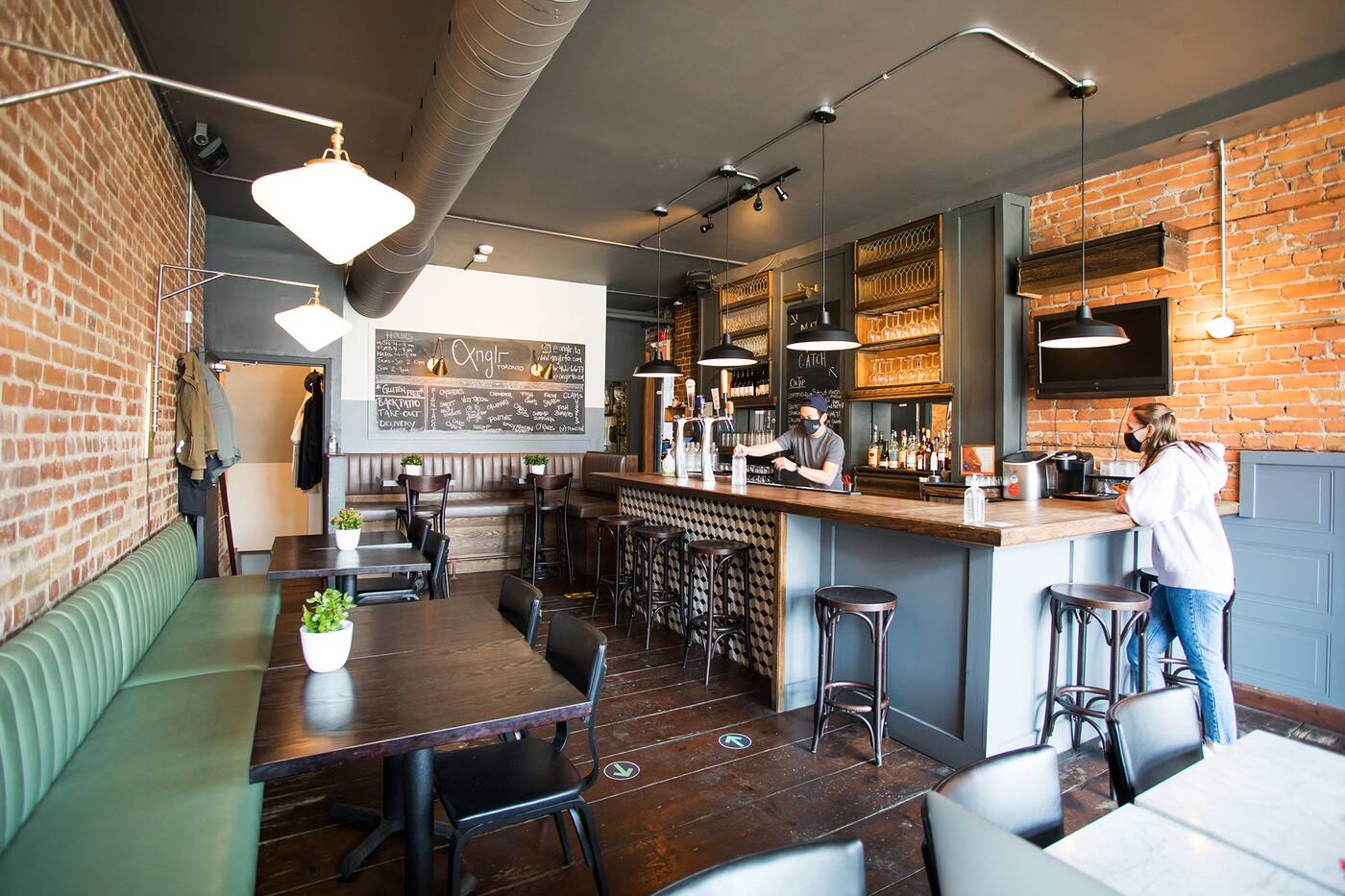 The space inside has a bit of an old-time feel with exposed brick, wooden bar stools and the specials scrawled on a chalkboard on the wall. A patio out back also features a vertical fern garden in the summertime and twinkling string lights overhead. 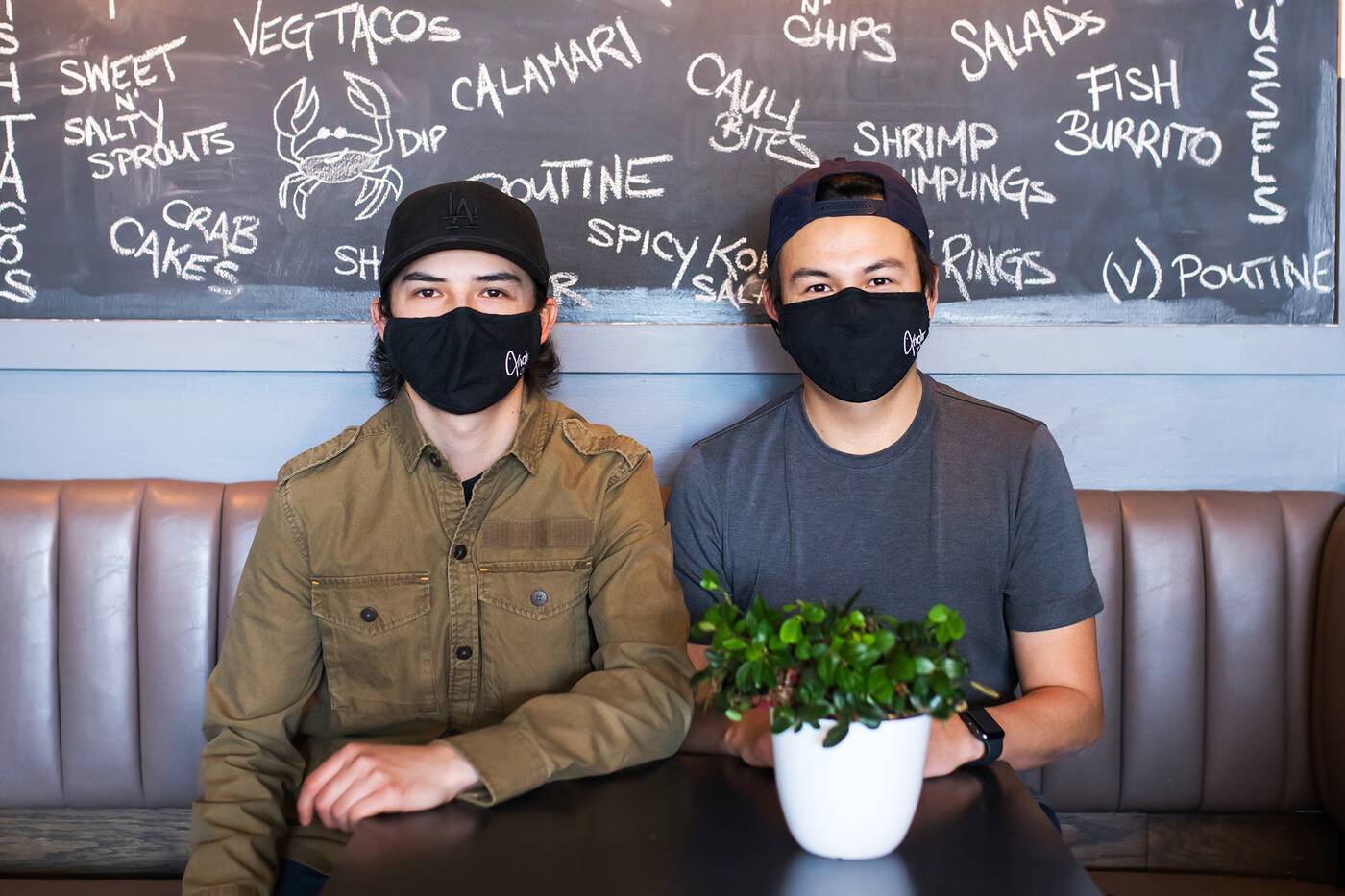 Brothers Chad and Tate Welton run the spot with Chad, 32, mixing the drinks and working the front-of-house and Tate, 24, running the show in the kitchen. 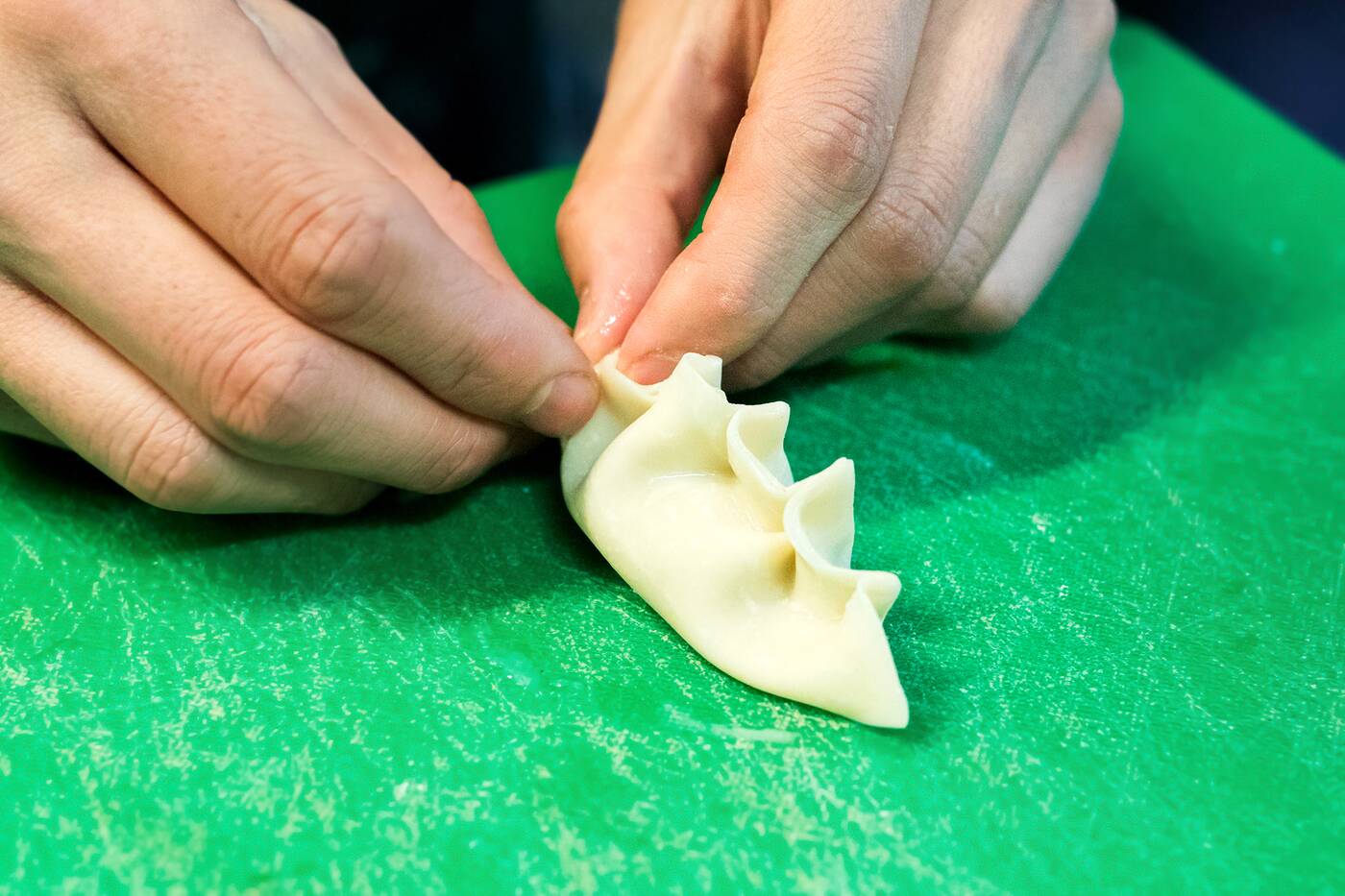 Tate started cooking at the age of 16, working at a seafood restaurant in the city. But he learned a lot of what he knows from their grandfather, a fellow restaurateur of 30 years, with whom he shares his love of food. He learned how to make dumplings at his grandfather's Chinese restaurant up north. 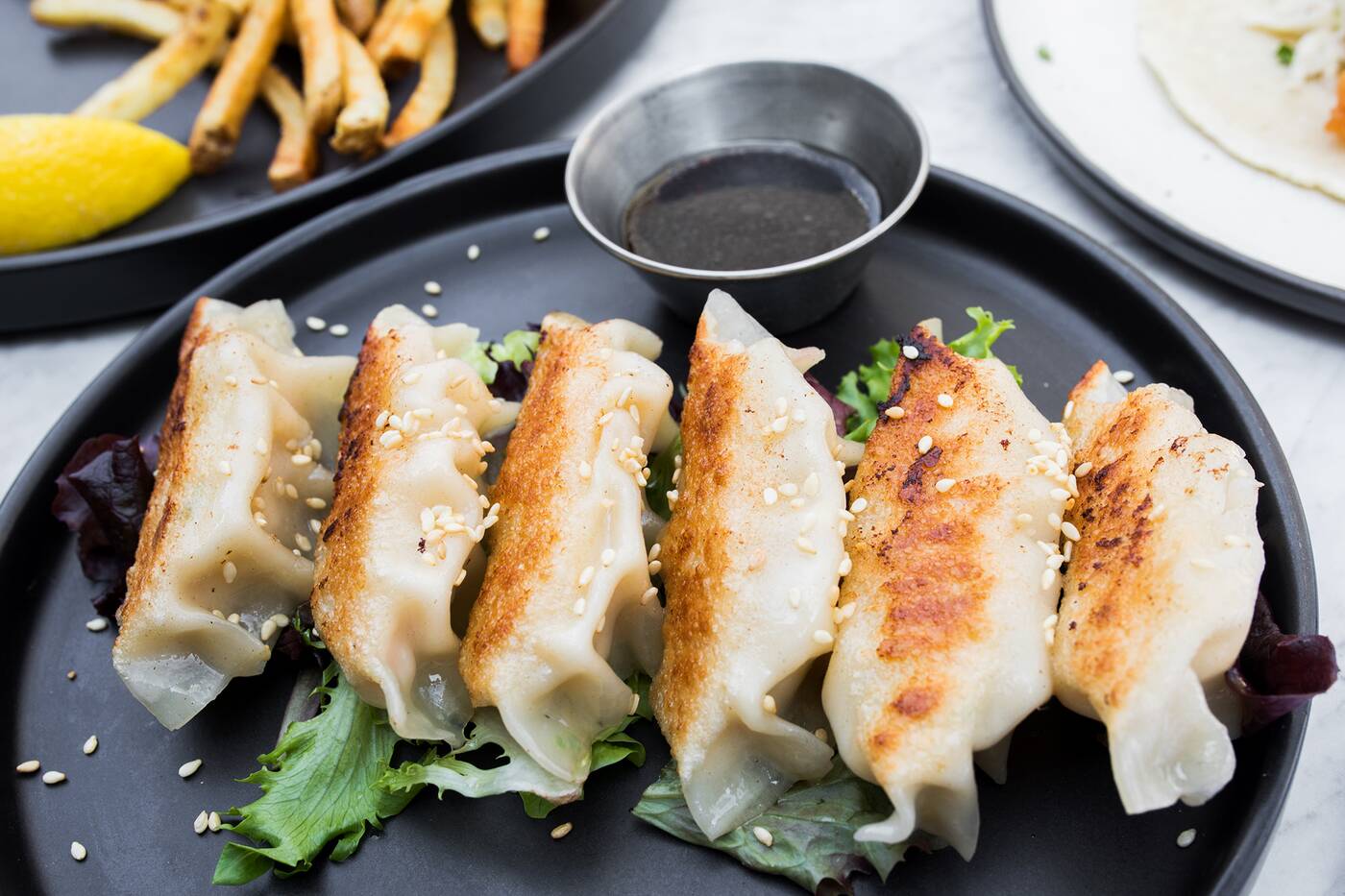 Here, the dumplings (six for $13) are filled with a mix of pureed shrimp, green onion, chili powder and sesame oil, pan-fried and served with a homemade ginger soy sauce. They're also always made fresh, never frozen. 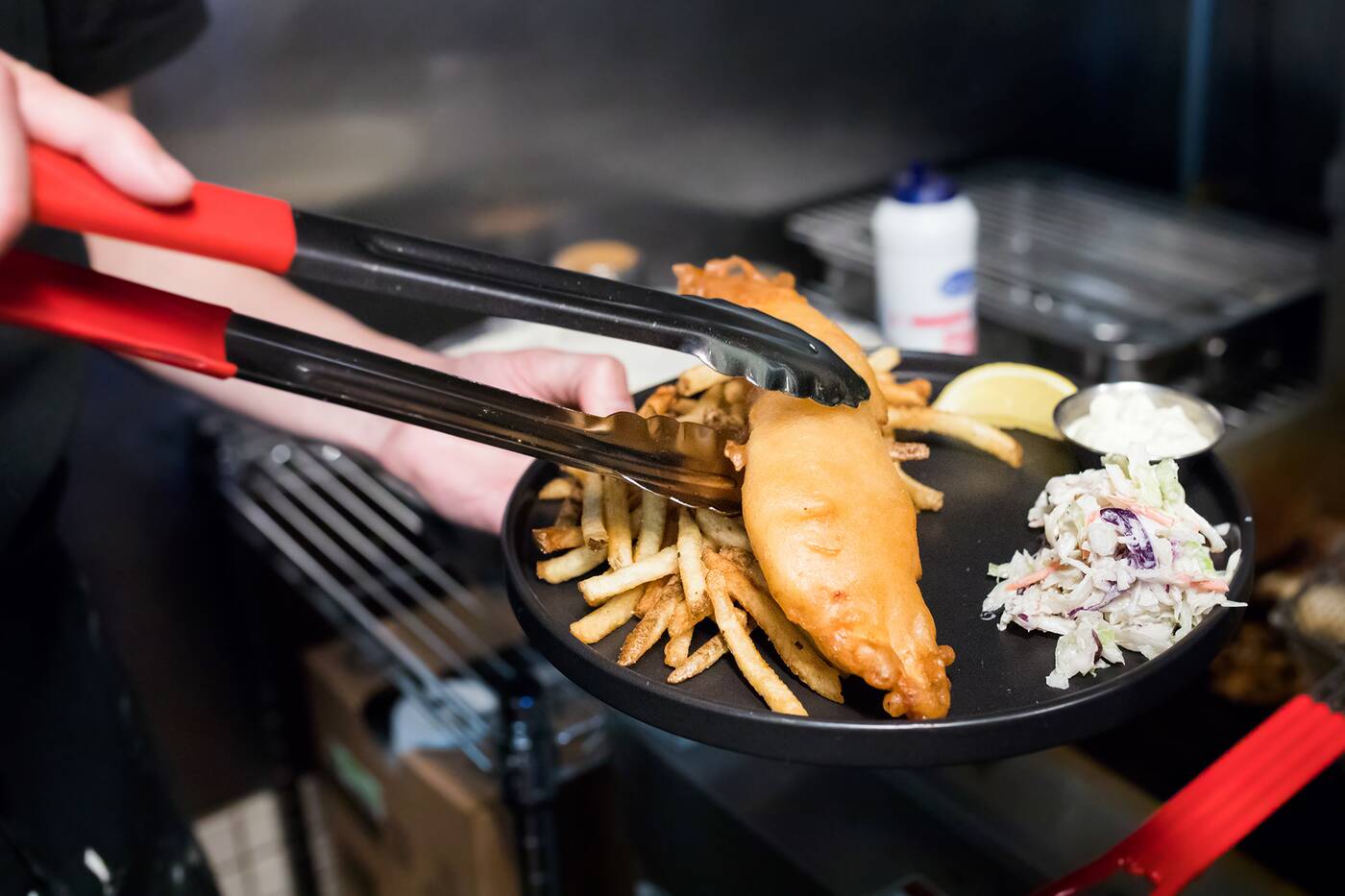 When it comes to fish and chips, you have the option between halibut ($22) or cod ($18). You also will have to make the call on whether you'd like it grilled or fried in either a house, Cajun or lemon herb batter. 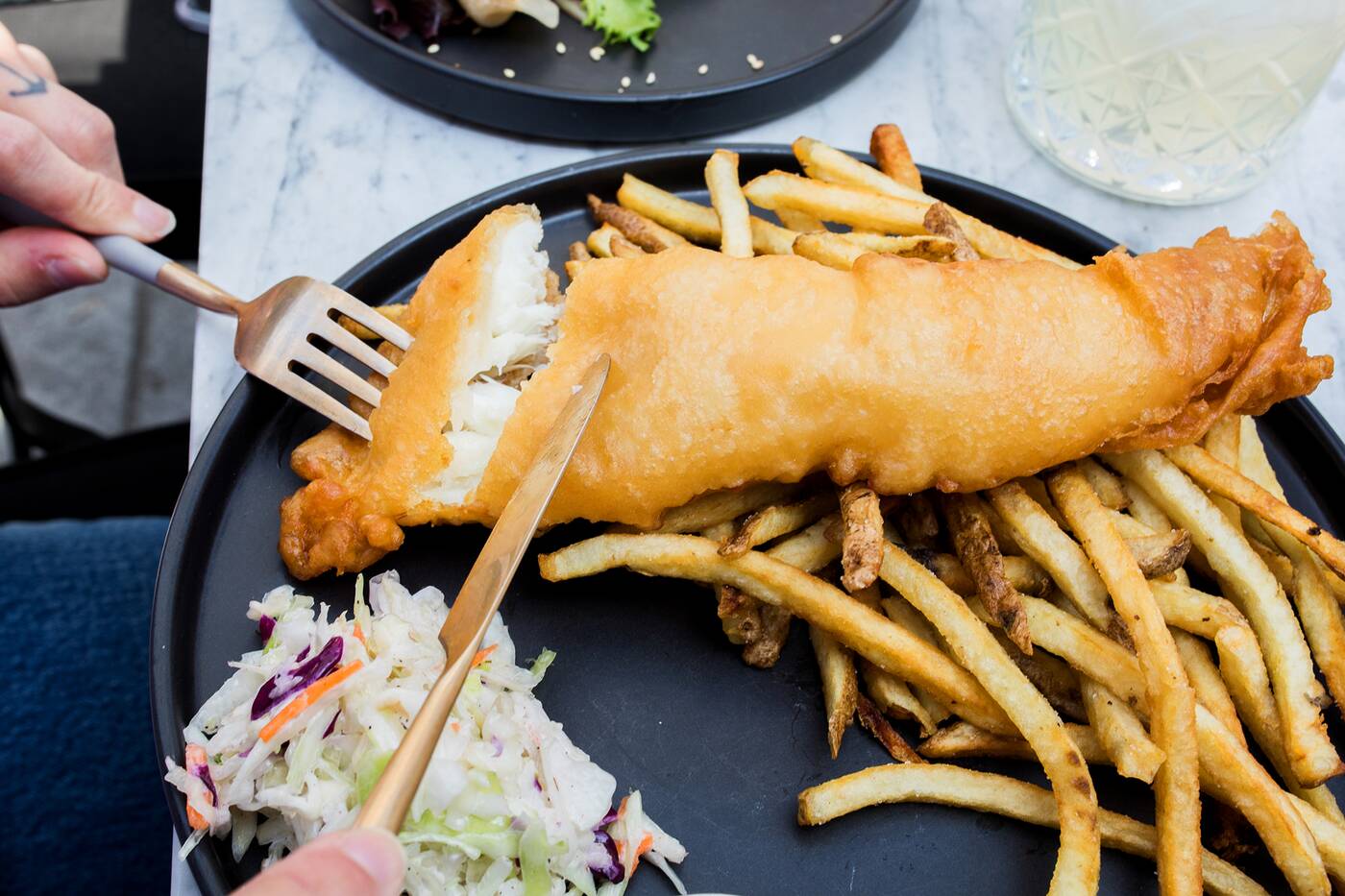 We go for the halibut in the house batter with some creamy slaw and fries for the most classic option. It's a nice-sized piece of fish, which is good since there doesn't seem to be an option to add another piece. The light batter also doesn't go overboard on the grease levels. 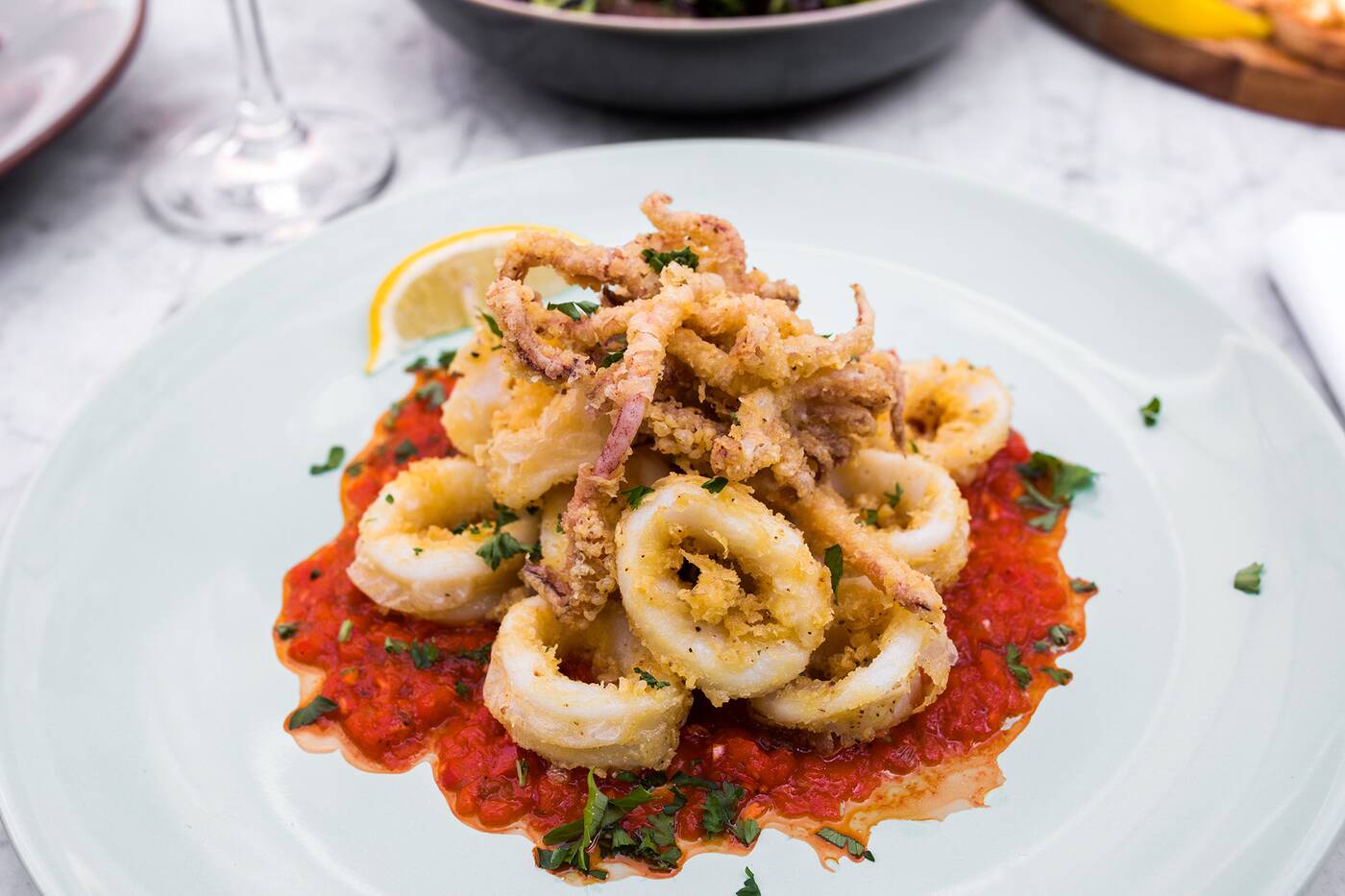 The calamari and fresh squid ($17) come on the greasier side, but on a delicious red pepper base that carries a bit of heat. 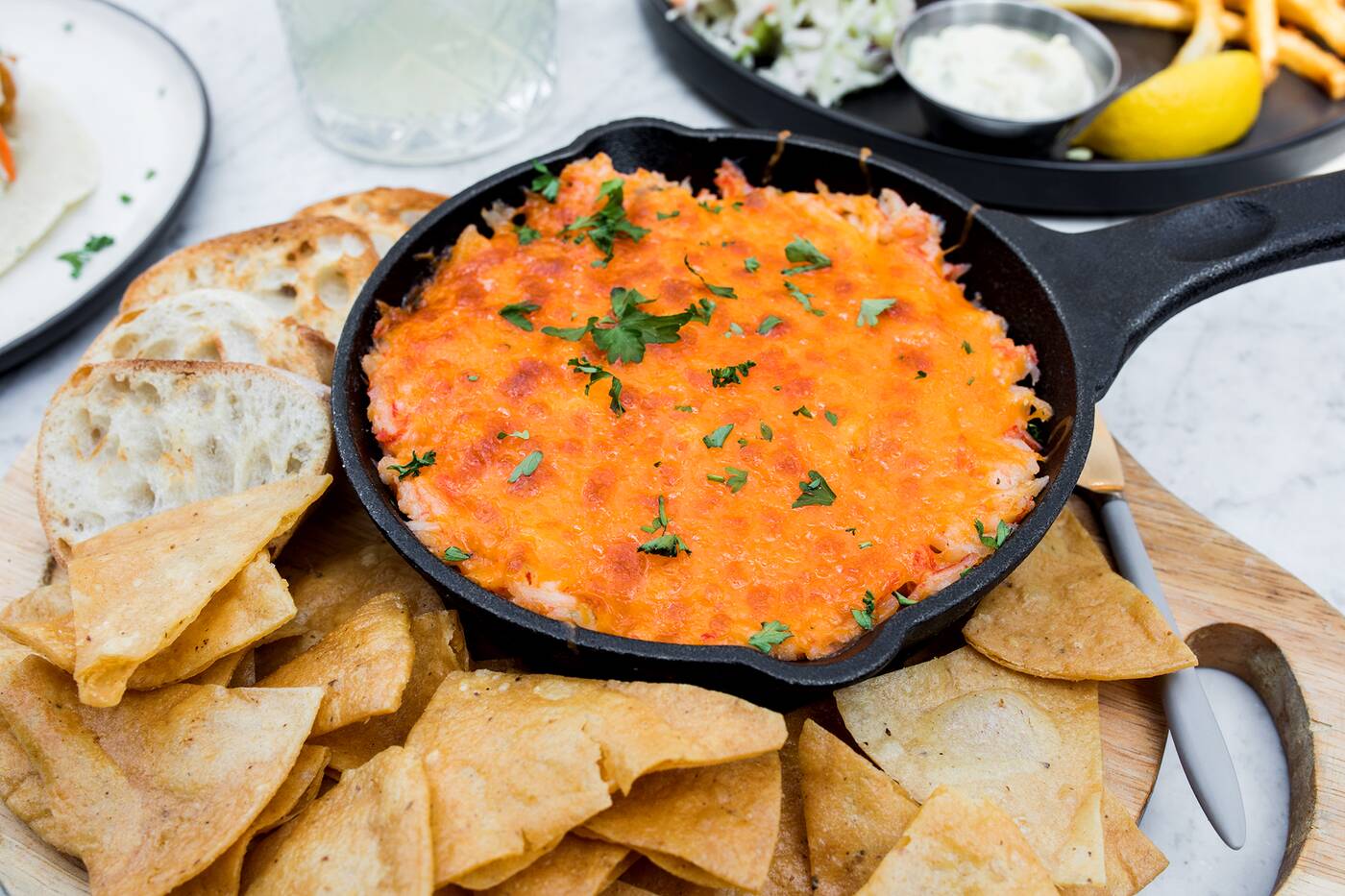 With plenty of shareable items on the menu, the brothers say it's best to order with some friends to enjoy a bit of everything, tapas-style. Adding to the long list is the hot crab dip ($15) that's served with baguettes or corn chips. 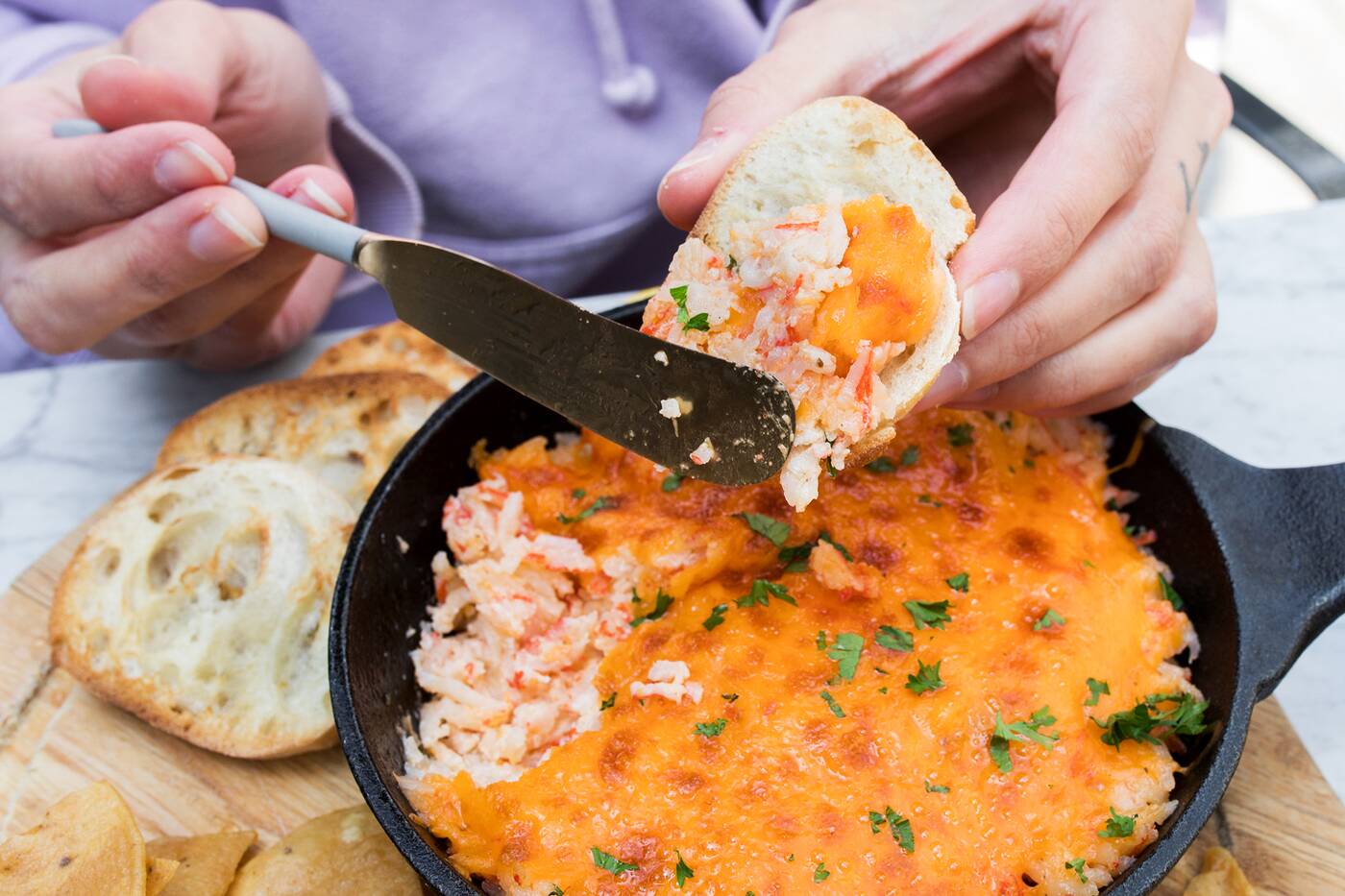 There's so much crab in the dip (you'll find full chunks of it) offering rich flavours. A generous amount of cheese is also melted over top with a bit of lemon, which Tate says brings a bit of added freshness and acidity. 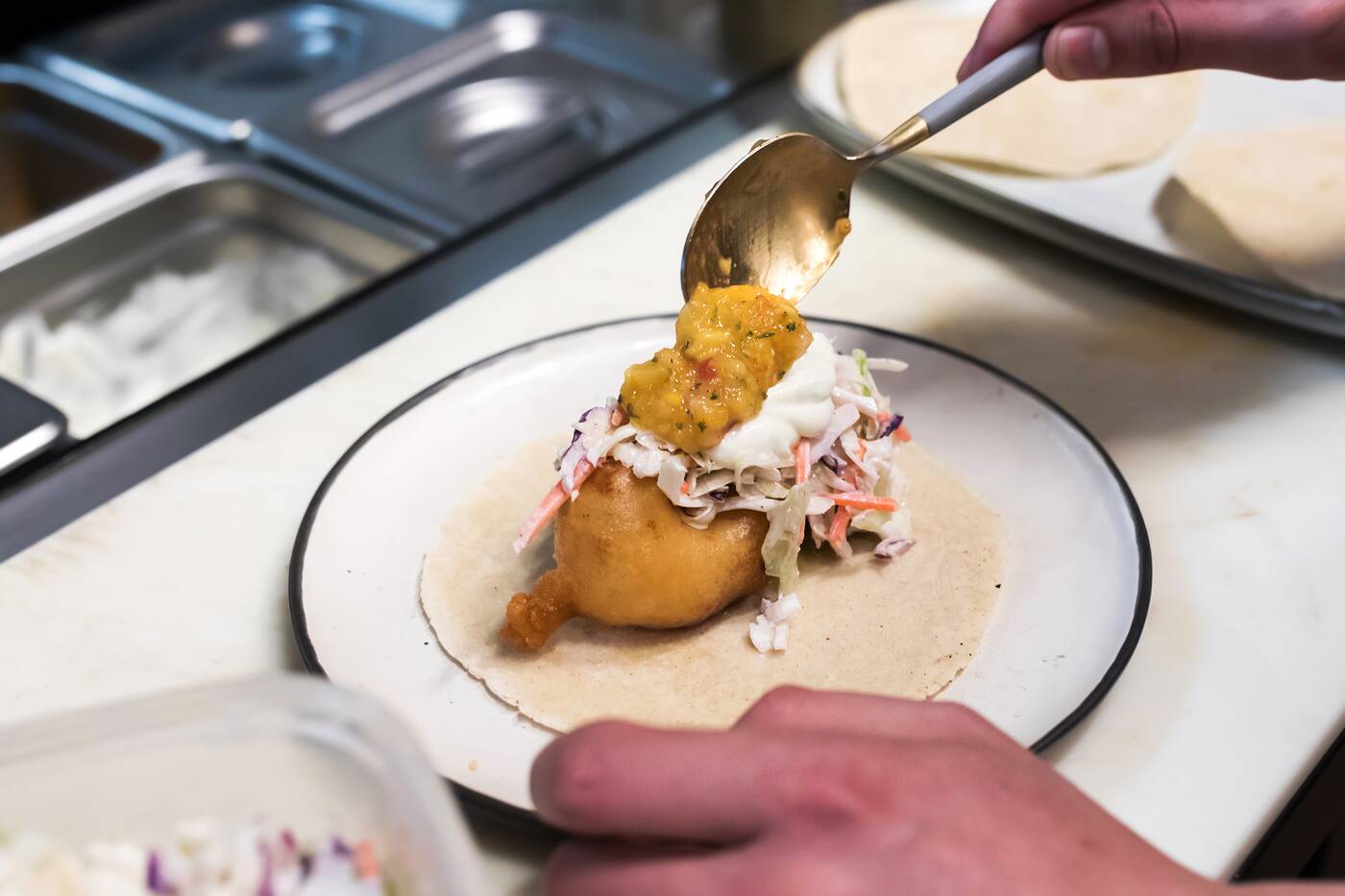 Fish tacos ($6 each) come with the optional filling of halibut, calamari or shrimp, all of which can either be grilled or battered and wrapped in a corn tortilla shell that Tate makes himself. 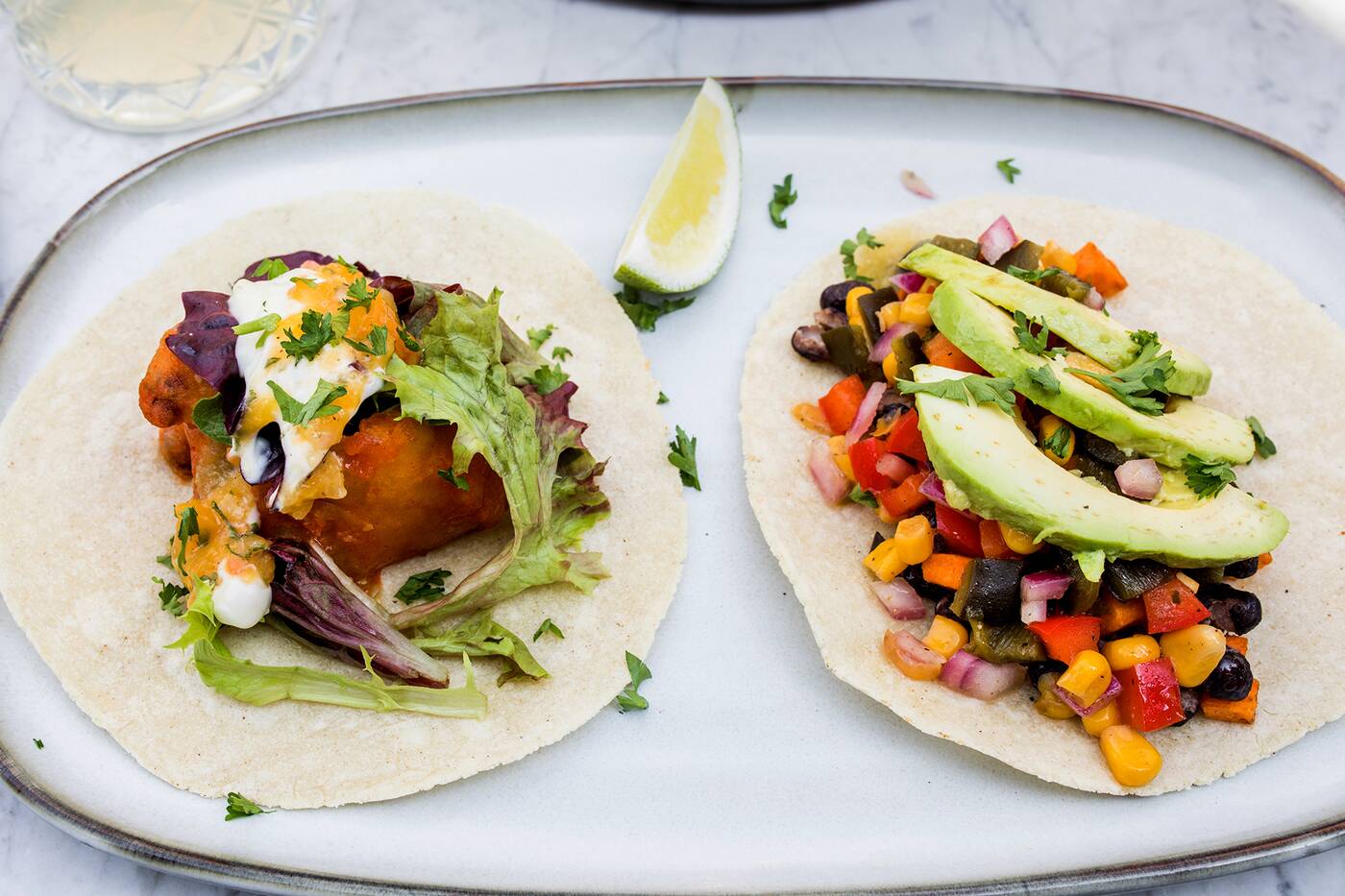 Other taco options include a roasted sweet potato with corn relish, avocado and black beans and sweet heat cauliflower with salsa verde, peach-mango salsa, tartar and buffalo sauce ($6 each). The salsas are also whipped up fresh by Tate. 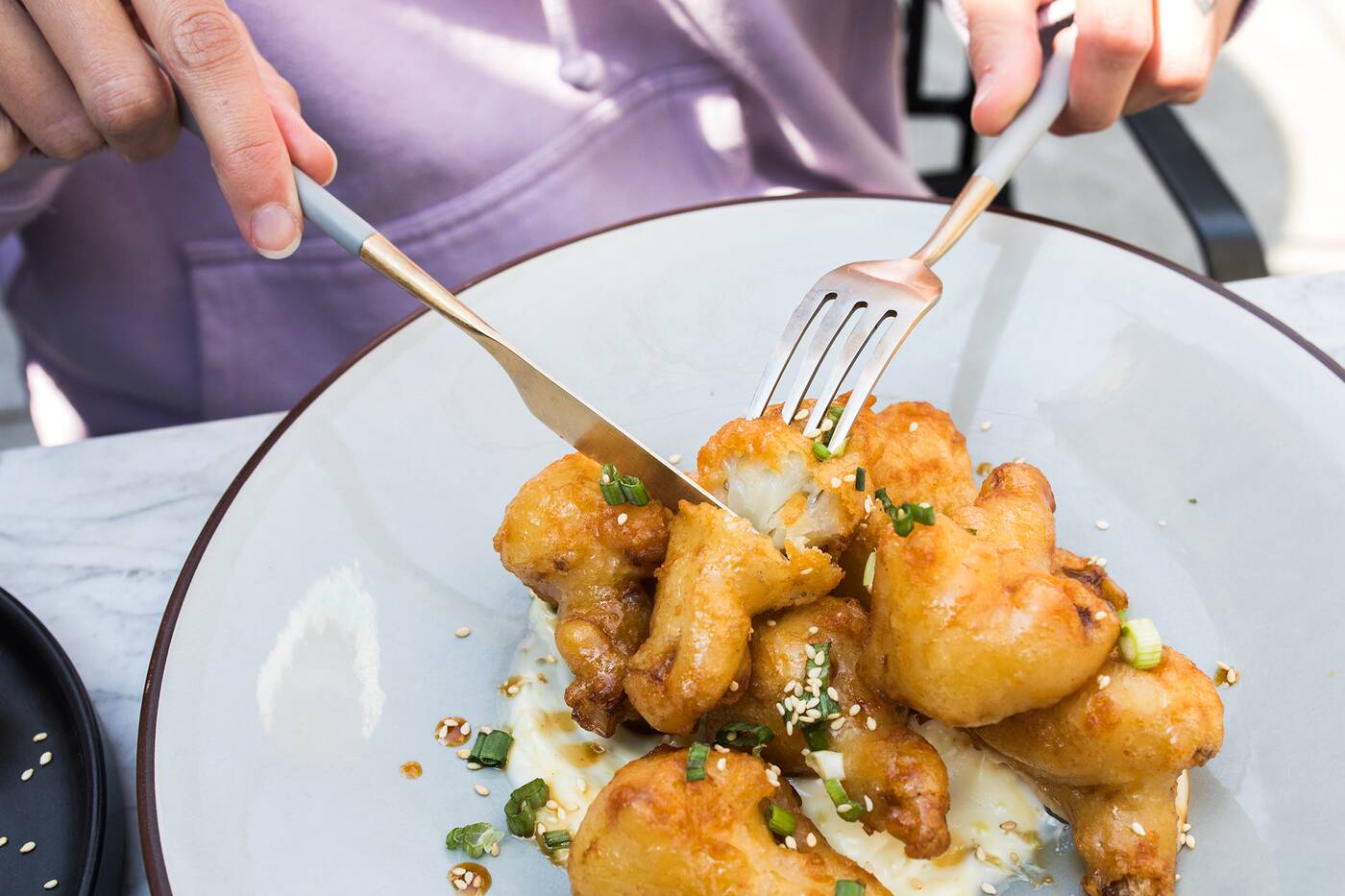 The battered cauliflower can also come on its own ($14) in the buffalo sauce or sweet Korean glaze, which is the go-to nine times out of 10. The sweet sauce makes it a delicious vegetarian option. 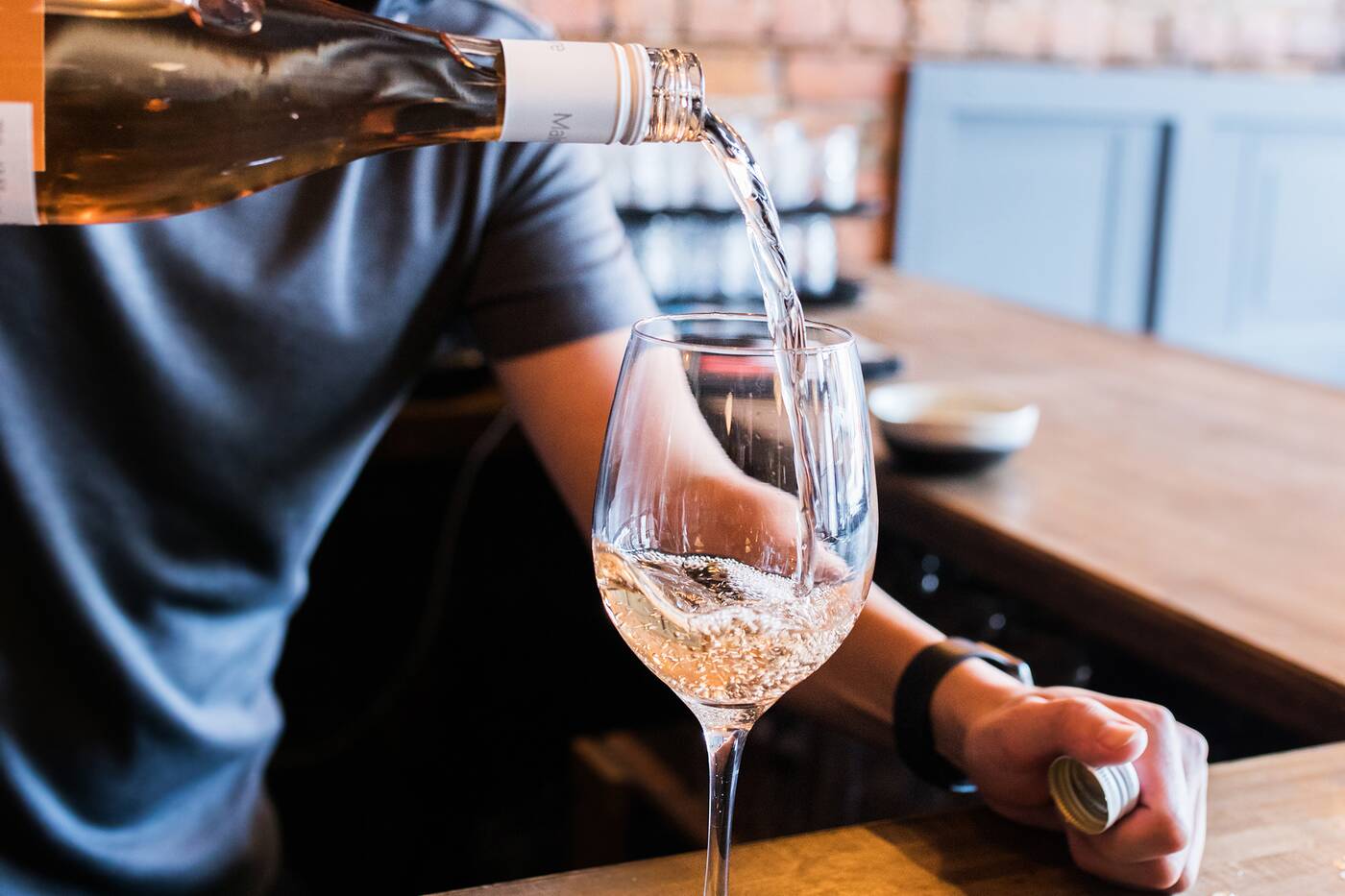 The beverage selection focuses on only local beers and Ontario wines, with the dry Malivore rosé pairing up nicely with their East Coast oysters, according to Chad. 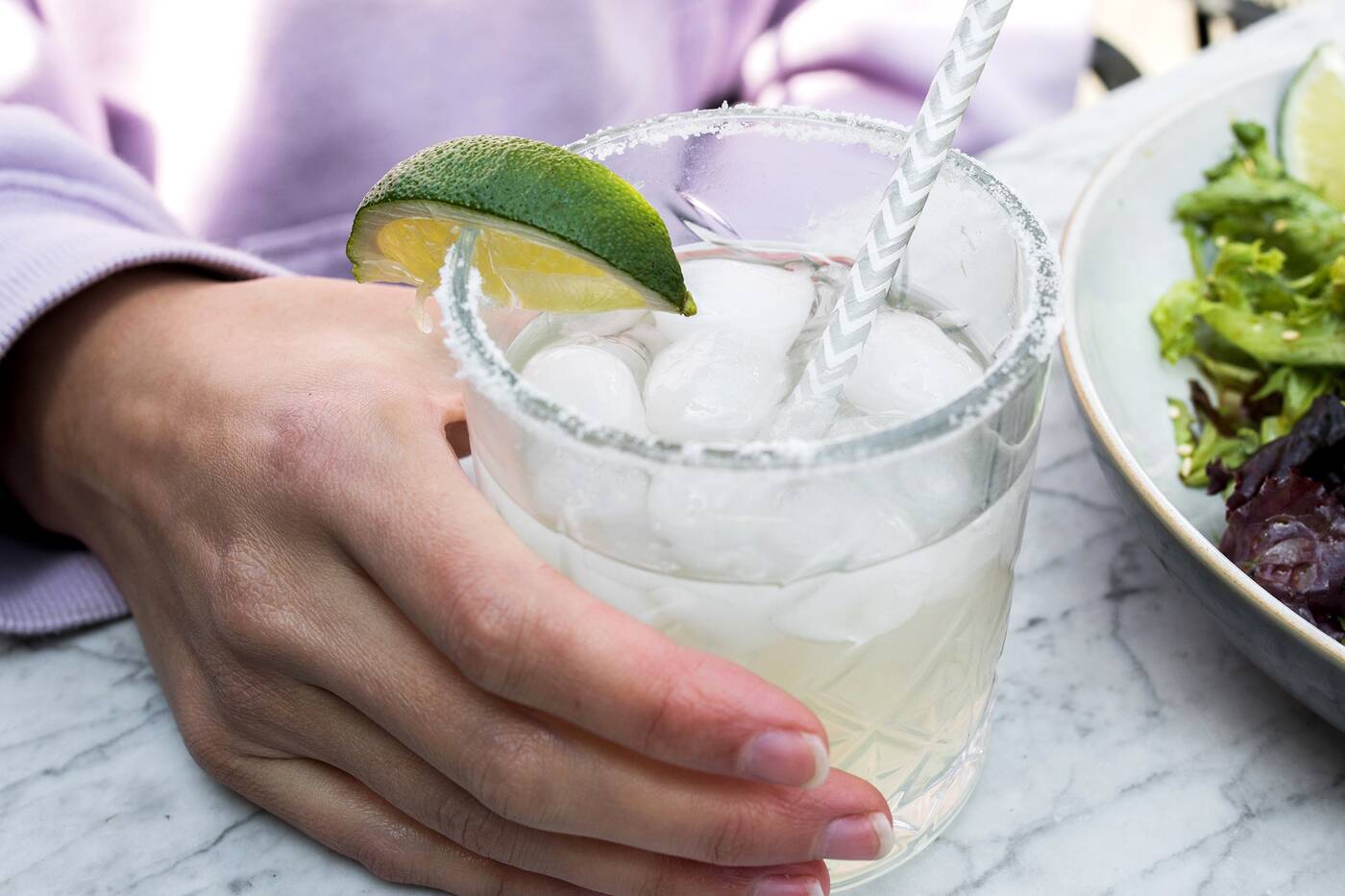 They also have a few choice cocktails like a house margarita (single: $12, double: $15) that's made with Cazadores or Casamigos tequila and stirred instead of shaken, as well as what they call a clown car ($12) with brandy, Cointreau, lemon, simple syrup and soda.

Anglr comes as a welcome addition to a street lacking in seafood, and when put together with their array of vegetarian dishes, there's something for everyone. 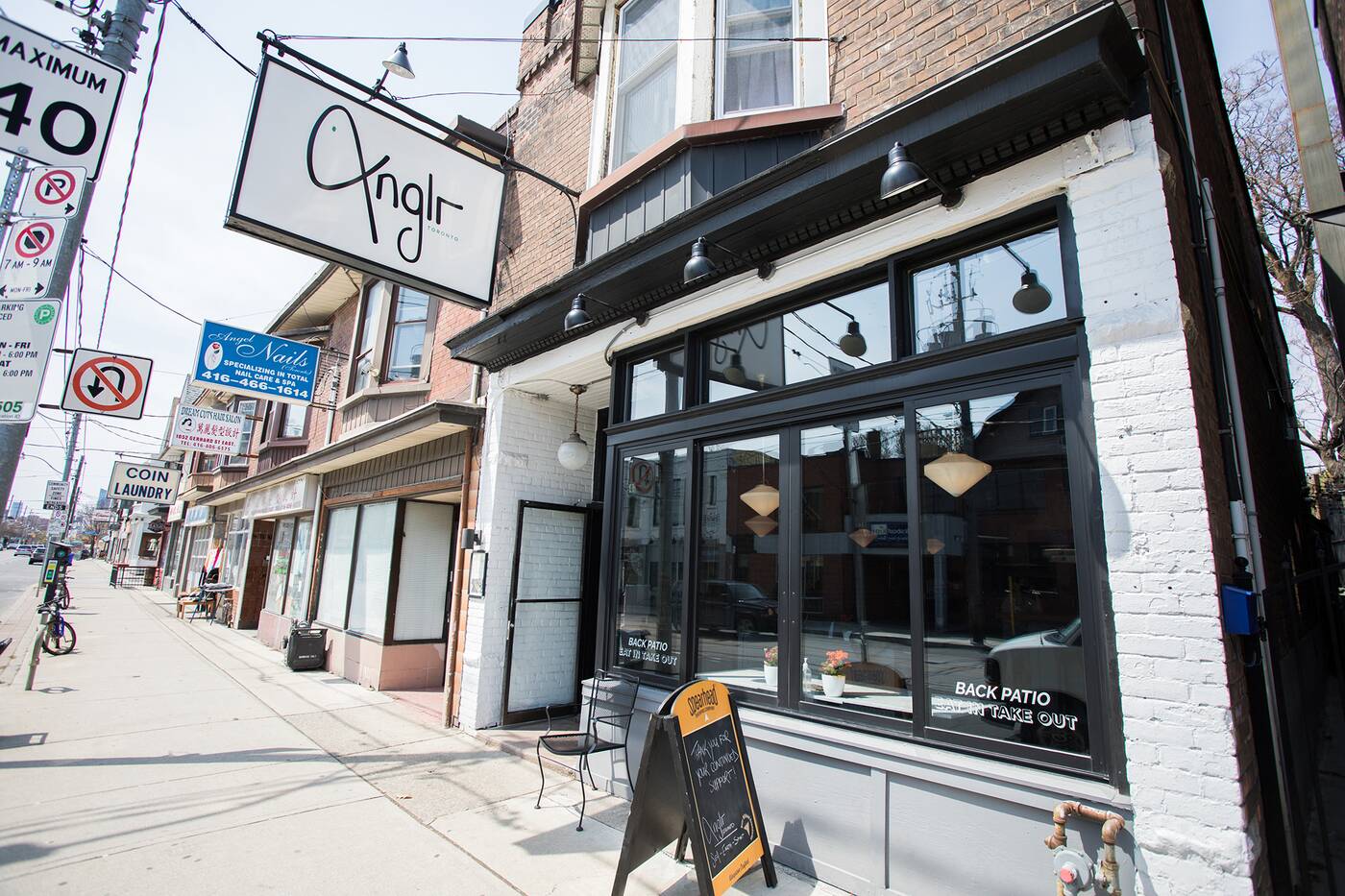