A relic of local history could soon be brought back to life after a generation of disuse, as a new development application reveals a plan to restore the last remaining (intact) building from the long-lost Toronto Central Prison complex in the Liberty Village neighbourhood and give the city a brand new art gallery.

The former Toronto Central Prison Chapel has stood at what is now 70 East Liberty Street for more than 140 years, built as a Roman Catholic chapel serving the notoriously-brutal correctional facility during its brief 42-year existence. 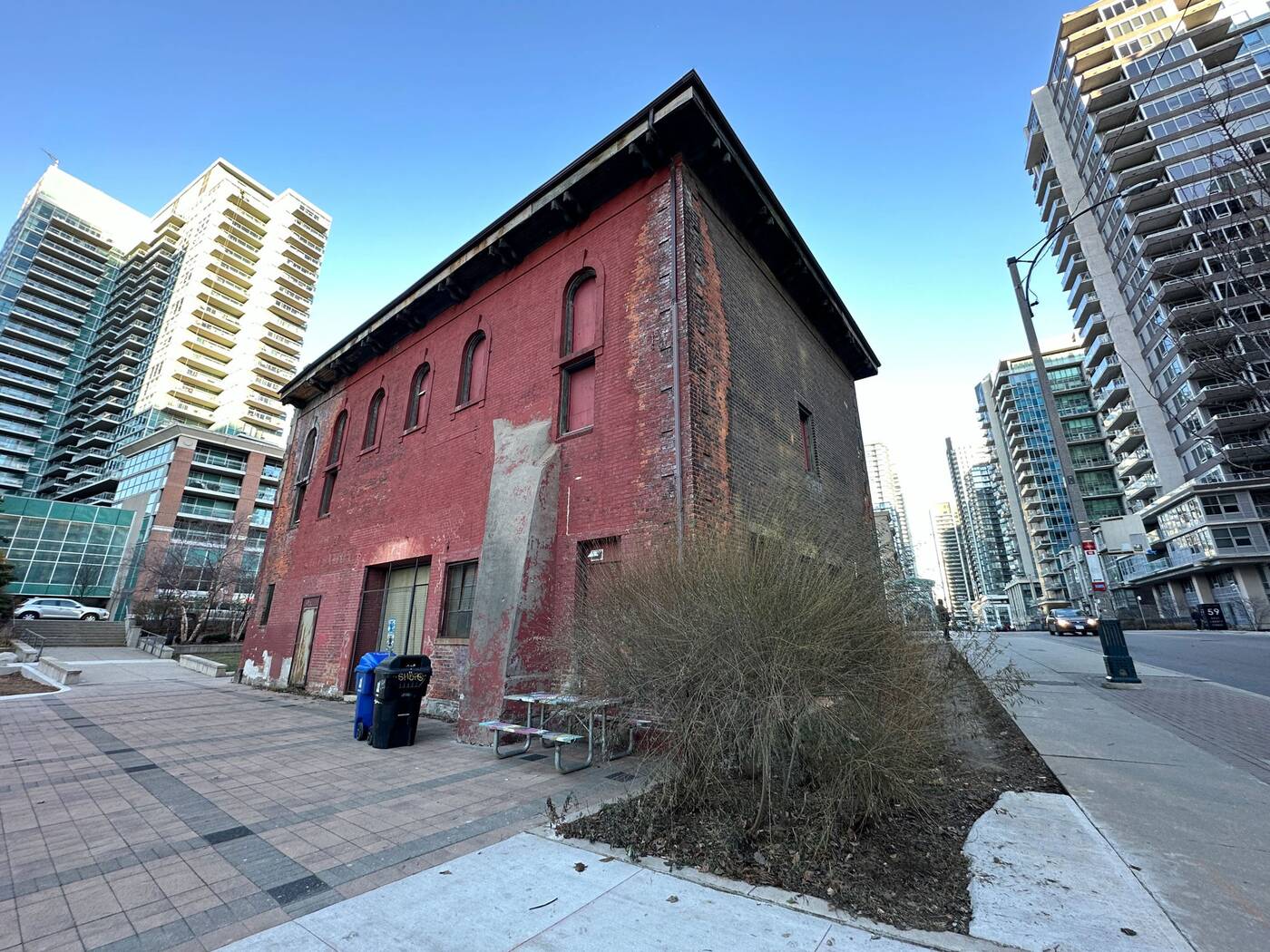 The chapel is the most prominent remaining element of the Toronto Central Prison demolished more than a century ago. Photo by Lauren O'Neil.

Following the prison's closure in 1915, the complex and chapel building became part of an army base with barracks and training grounds for the duration of WWI and into 1920, when most of the former prison complex was demolished. 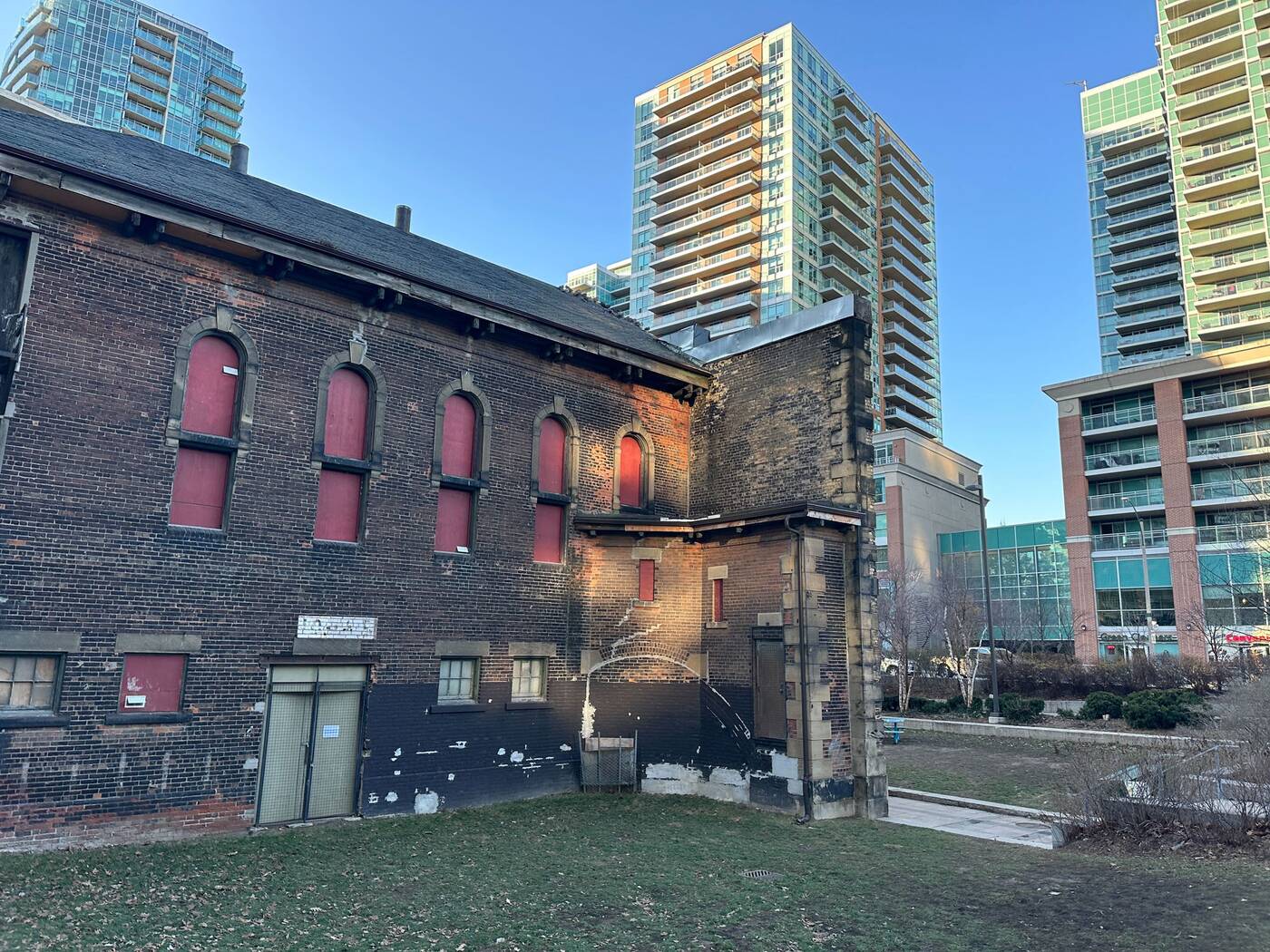 The chapel and preserved prison wall are now surrounded by a public park. Photo by Lauren O'Neil.

The surviving circa 1880 chapel was later incorporated into the Inglis factory that dominated Liberty Village for much of the 20th century. 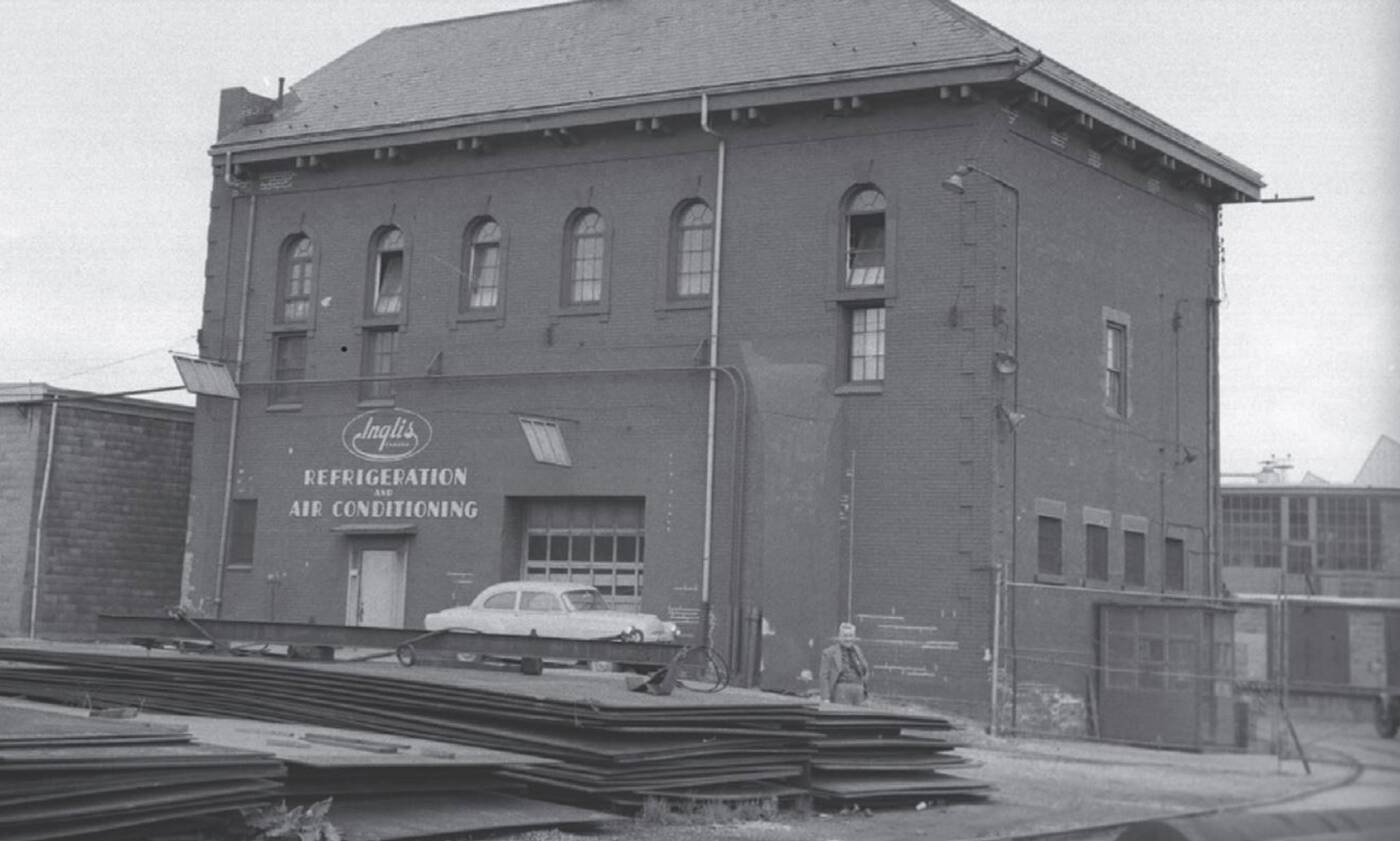 The chapel during its time as part of the Inglis factory. Photo via City of Toronto.

The decline of heavy industry hit the area hard, and by the early 1980s, factories had vacated the former prison lands, leaving behind a contaminated brownfield site. 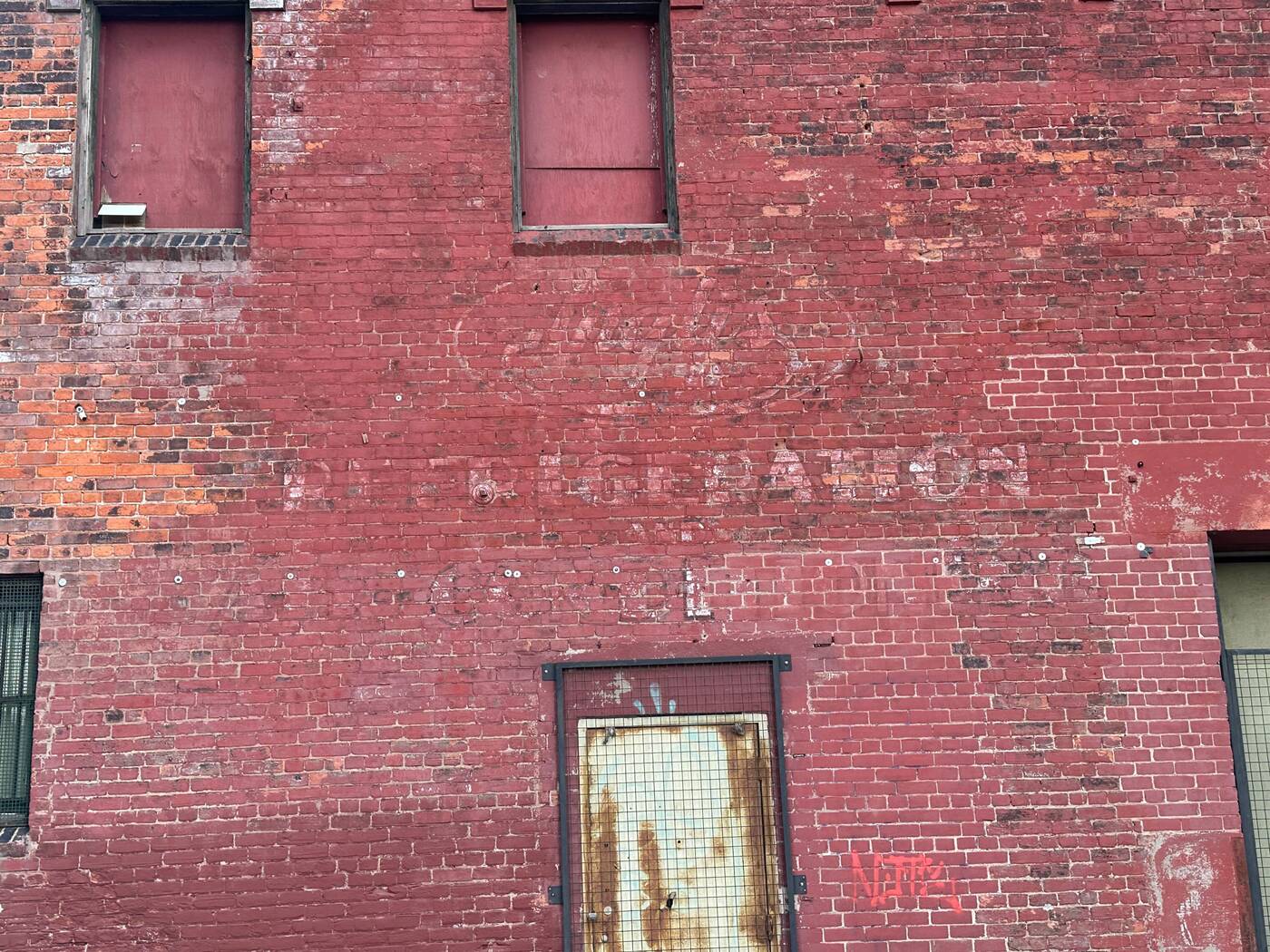 The Inglis sign remains visible to this day. Photo by Lauren O'Neil.

But the chapel and an attached north prison wall were granted heritage status in 1996, sparing them from demolition in the wave of redevelopment that would soon crest over the area.

By the close of the 20th century, the city had embarked on planning a new community to transform the disused lands around the surviving chapel building in what is now the thriving King-Liberty Village area.

The chapel has sat idle and boarded up during the neighbourhood's transformation, sticking out like a sore thumb from the park that exists around it. And now it looks like it will get its turn to glow up.

A plan by hospitality firm Pegasus Group to open a Miller Tavern location in the building fell flat in the early 2010s, but a new plan surfaced in November, aiming to restore and convert the old edifice into a home for a new art gallery.

Pegasus Group has once again submitted plans for a restoration of the building, this time taking a less drastic approach overseen by Paul Marques Architect, that would rehabilitate the existing heritage asset and create a new public art gallery.

No major changes are planned for the building beyond repairs and minor modifications, though exterior renovations would include exterior uplighting and new windows designed in character with the existing architecture.

Though few details about the proposed gallery are mentioned in the planning application, architectural plans indicate that there will be a bar and kitchenette connected to an outdoor patio to be used for seasonal gallery purposes, and an open floorplate for art displays on the second floor.

Supporting gallery office space would occupy the majority of the upper floor. 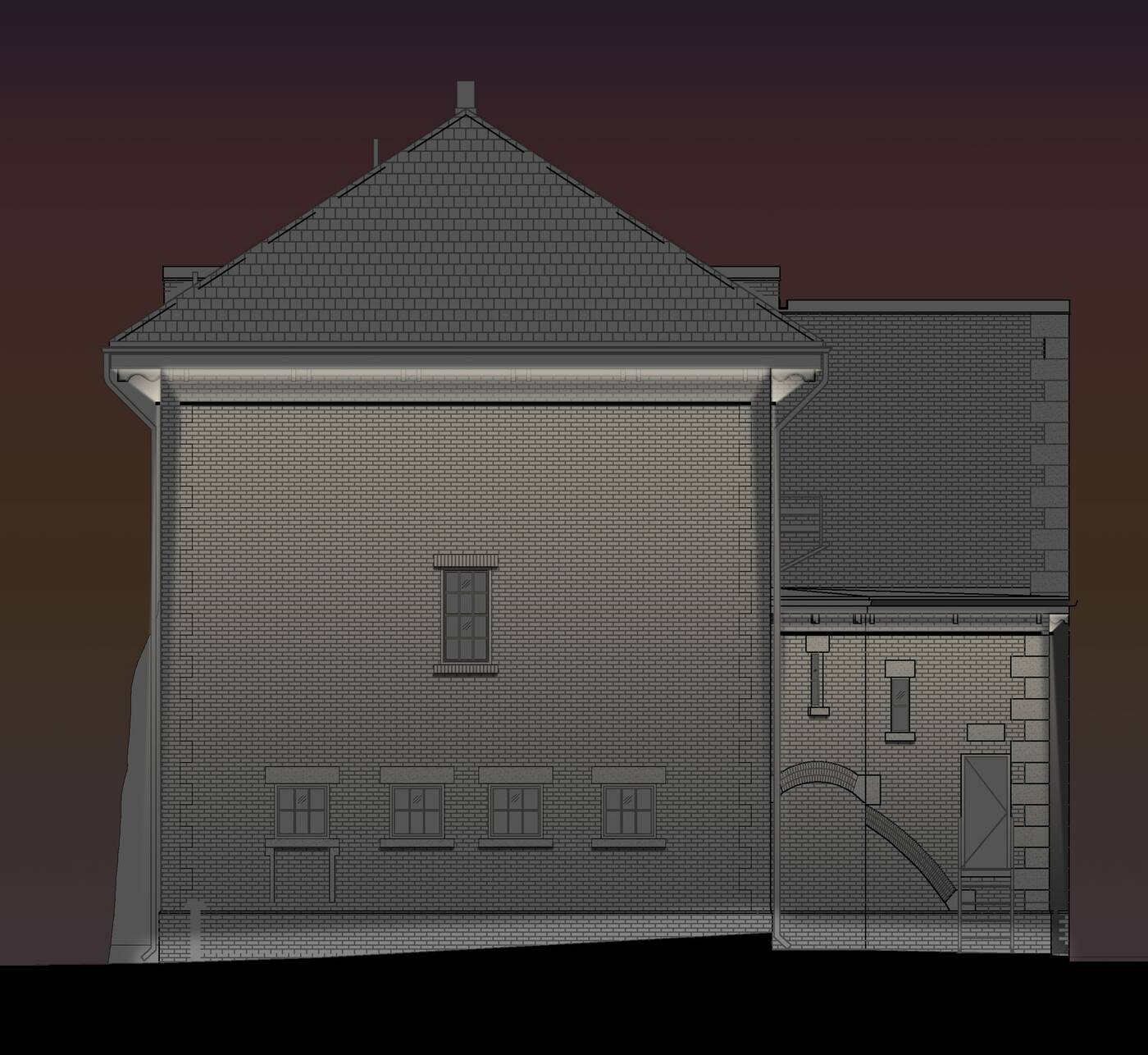 blogTO attempted to contact Pegasus Group for comment on the proposed gallery, but there has been no statement as of yet.

Interestingly, Pegasus got a heck of a steal on the land by buying it early in the area's redevelopment.

The city subleased the building's space in the late 90s under an agreement that it would be refurbished, turning it over to Pegasus for the unbelievably low price of $1 plus HST per year.

So it's no wonder they've been able to sit on the property for so long.