Colloquially speaking, most people in Toronto could tell you that people have been leaving the city in recent years for smaller markets to buy homes, start families, or simply escape the (exorbitantly pricey) hustle and bustle of living in Canada's largest city.

Quantitatively, a new report from one of the world's largest real estate franchisors (RE/MAX) reveals that this isn't a matter of perception; urbanites have indeed very much been fleeing big cities since the pandemic hit, much to the chagrin or delight of people in smaller towns where real estate values have subsequently skyrocketed.

And it's not only small Ontario markets feeling the burn from Toronto's exodus, but communities all over Canada.

RE/MAX Canada revealed in a report released this morning that nearly a quarter (23 per cent) of Canadians "moved from a larger market to a smaller one," since March of 2020, and that these people are "largely happy (85 per cent of them) about the move."

"Half of Canadians that moved to a small town believe their mental health has improved after moving to a smaller community (52 per cent). "

But it's not only cheaper, larger homes are drawing and keeping urbanites in small towns, according to RE/MAX Canada, which notes in its report that 'small markets' are attracting new residents and homebuyers "primarily for the liveability factors that they offer, such as green spaces and neighbourhood dynamism."

The real estate juggernaut's 2022 Small Markets Report, released Wednesday, looks at home sales and price trends in Canada's fastest growing "small markets" — defined as places with less than 440,000 people in total and with the highest population spikes seen in 2021.

You can see the full Canada-wide breakdown of which markets have fared the best below: 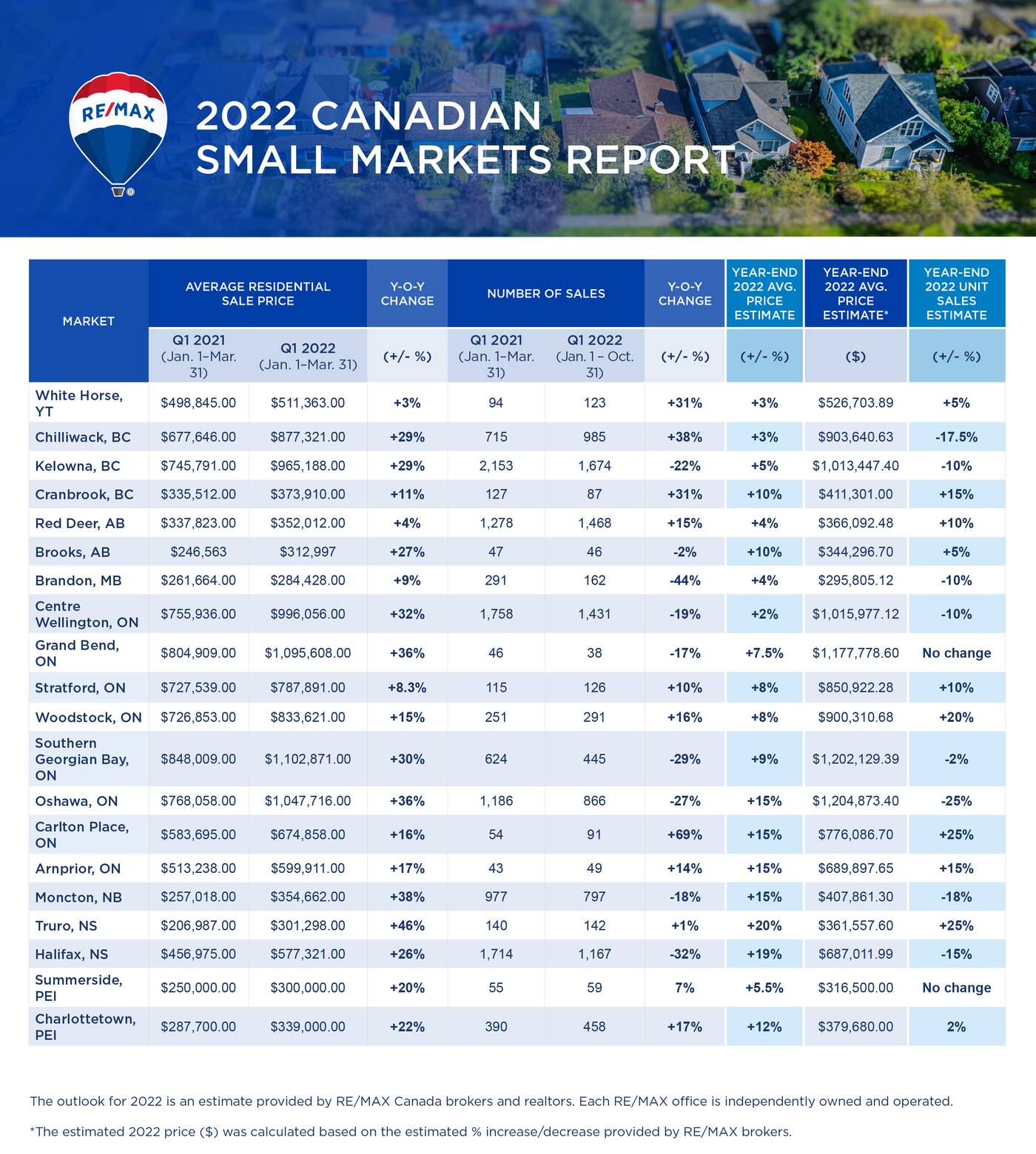 Brokers say that prices in most communities across Ontario continue to rise due to low inventory and growing demand, with average price increases expected to range from three per cent up to 20 per cent through the remainder of 2022.

"Unsurprisingly, some of these markets have already experienced significant year-over-year price appreciation in the range of 17 to 38 per cent," notes the report.

Prices may have been cheaper in small towns at one point, but they've been rising fast of late, and some of those who have long lived in such markets aren't pleased.

"However, the diversity of new homebuyers can be a positive thing for local communities... The recent notable growth of Canada's small markets makes it an opportune time for municipal and provincial governments to focus on alleviating these concerns through measures that address affordability and housing supply, but also aim to revitalize and improve community liveability that has made these regions the preferred choice of many Canadians."

Interest in small markets doesn't seem to be waning, either, according to RE/MAX, regardless of rising prices. People are more concerned on the whole about "liveability."

"Liveability is all about quality of life, and as we all work toward getting back to enjoying the things we love the most about our communities, it's not surprising that it ranks so highly in importance for Canadians – especially now," said RE/MAX Canada president Christopher Alexander.

"Despite the fact that the national housing market still has challenges to overcome, smaller communities are viable options for Canadian homebuyers looking for the right balance between liveability and affordability."