There's been a lot of hype and anticipation around The One, located at One Bloor West.

The innovative structure, particularly the exoskeleton, which is a structural engineering feat never seen before in Canada to the sheer scale of the building are all impressive in their own right. 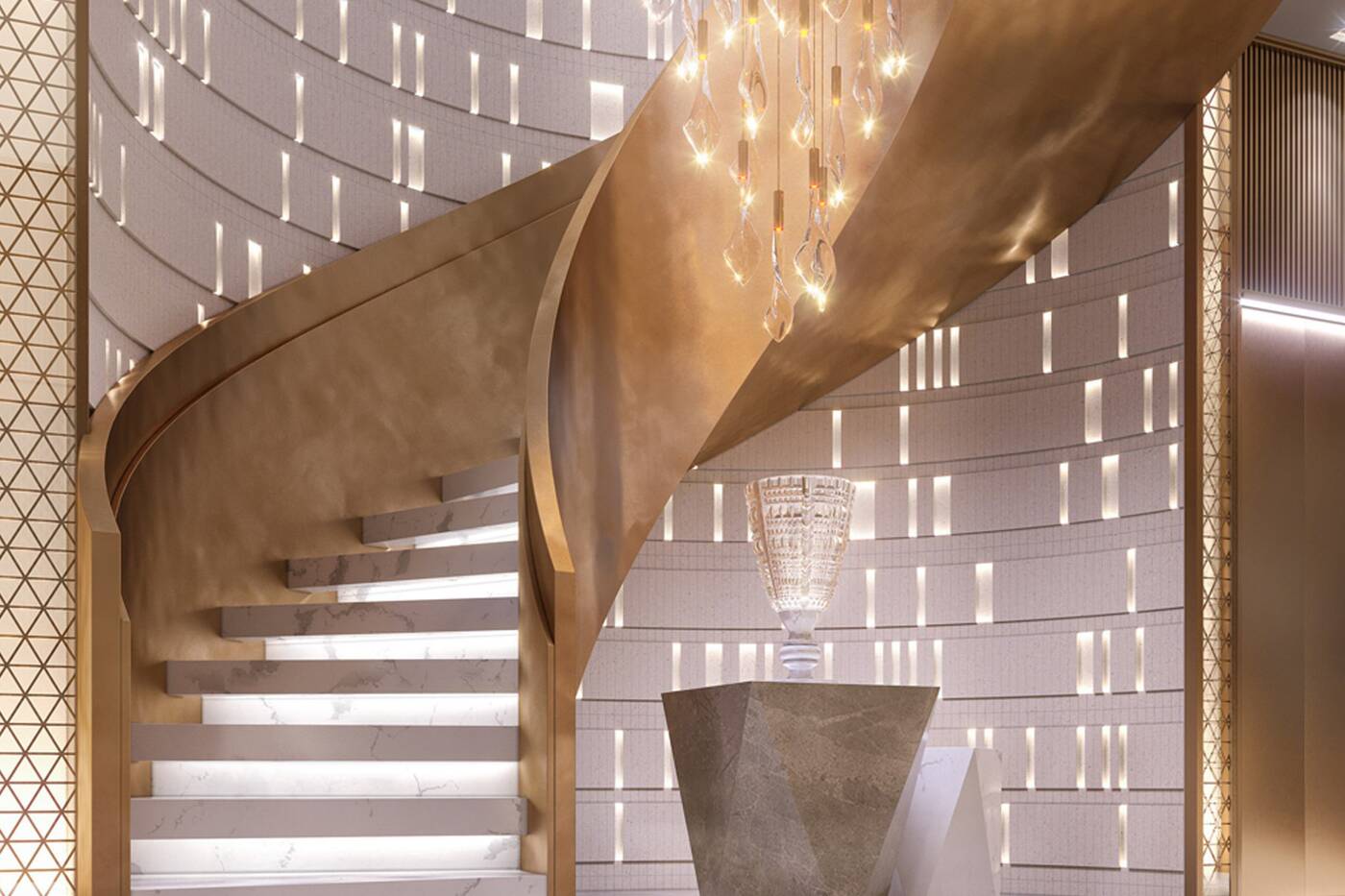 A rendering of a mettalic spiral staircase.

The building, which will be composed of a staggering 85-storeys  containing everything from restaurants to event spaces, boutique hotel rooms and ground-level retail shops, has been making headlines since 2017. 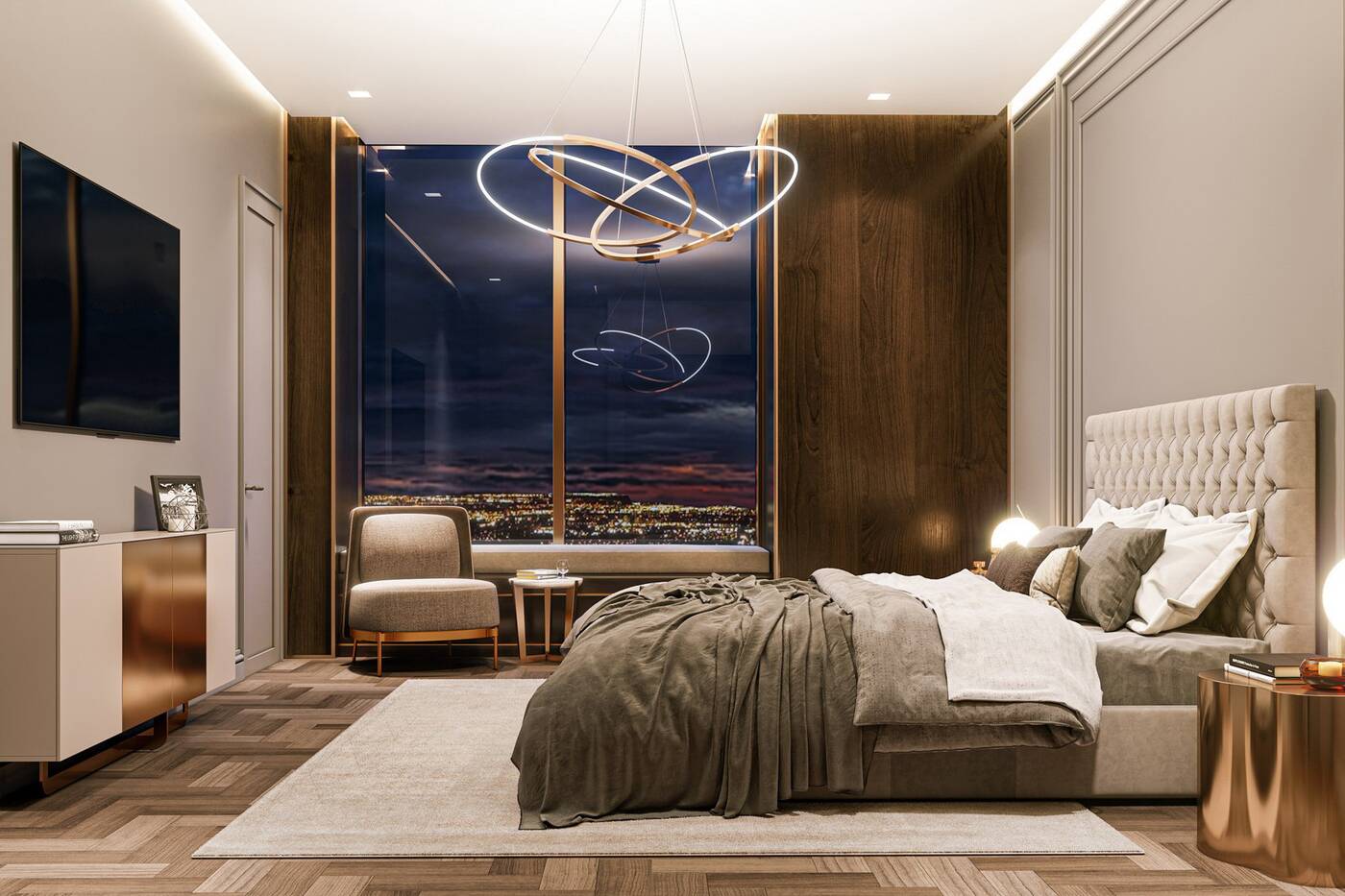 But possibly the most exciting things are the 416 luxury residential units that will take up the upper floors of the building. 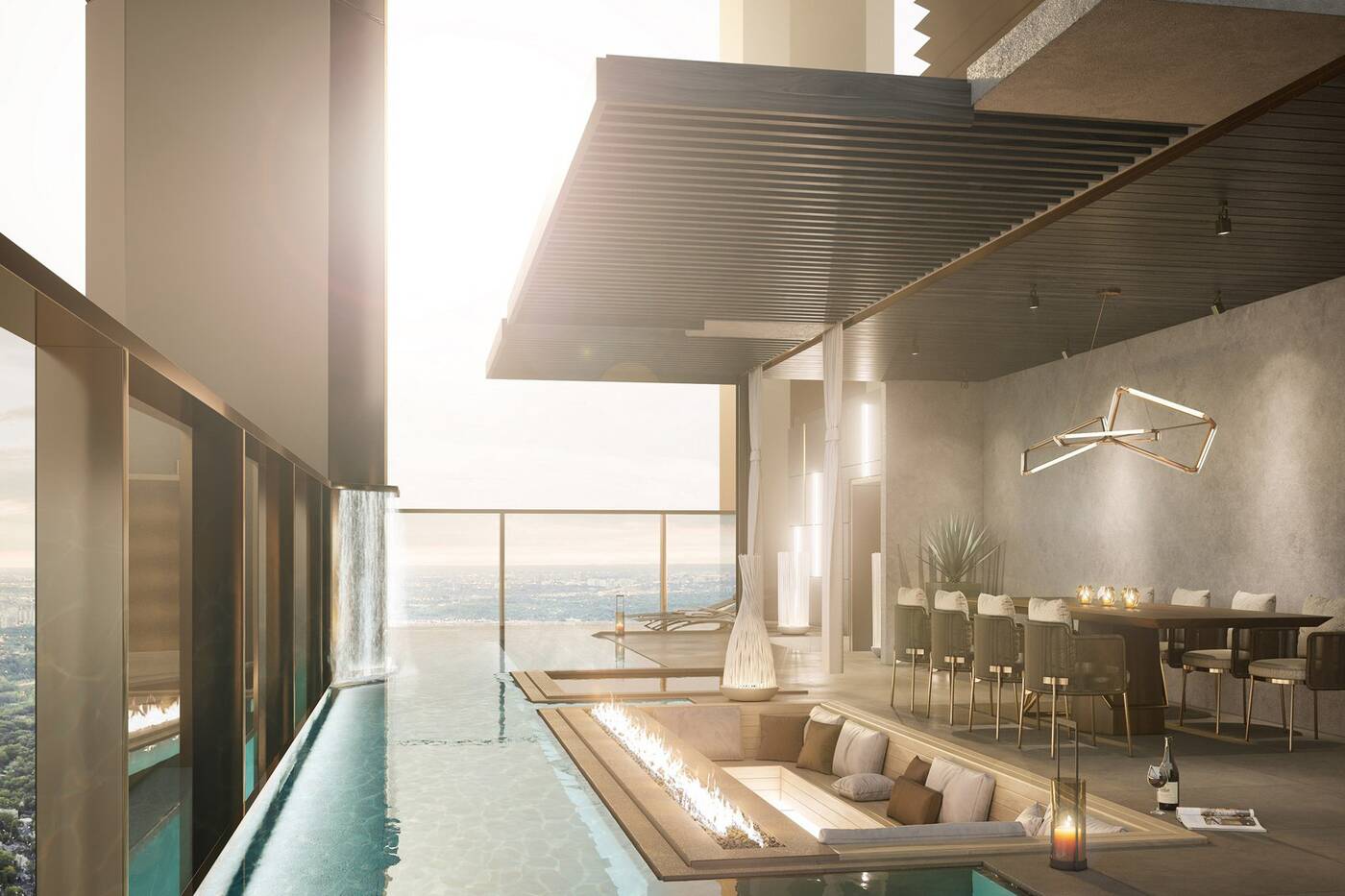 A lounge area with a pool.

Just this month we've seen some of the first residential units come on the market and despite the building not even being fully built the suites look very impressive. 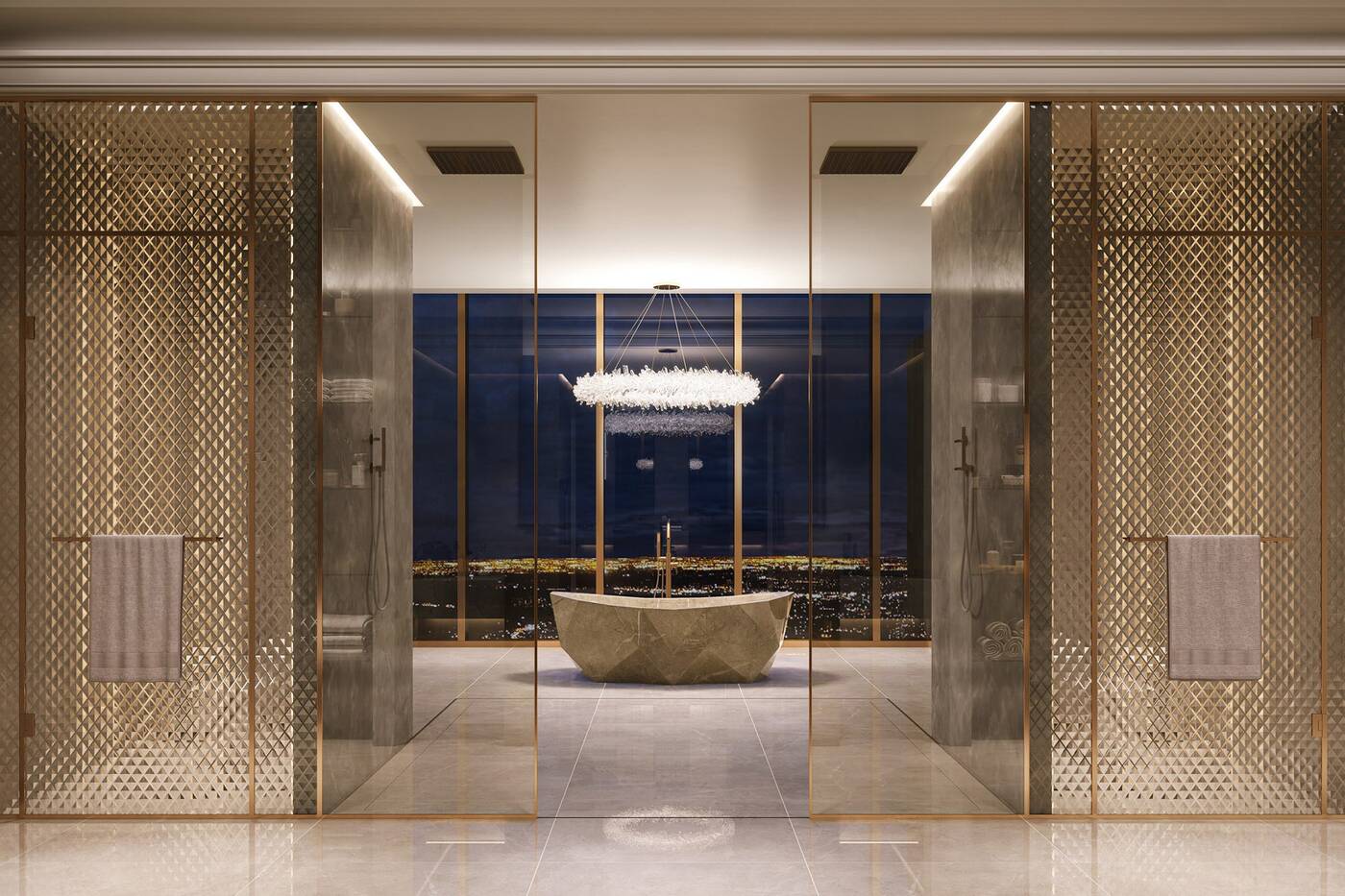 For example, this three-bedroom, five-bathroom penthouse suite has been listed for $31,620,000 and while there are definitely cheaper units in the building this suite isn't even the most expensive. 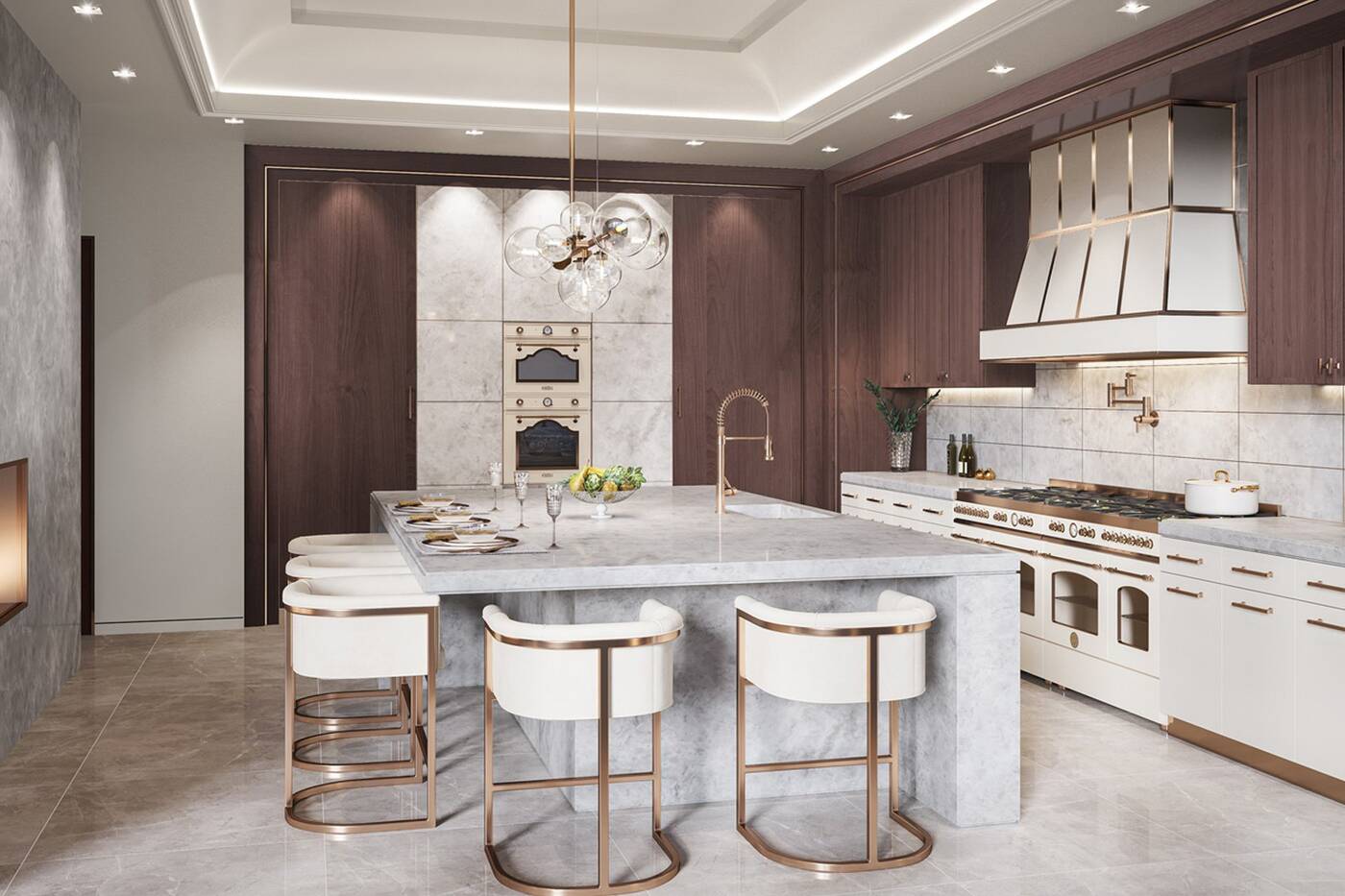 A lower penthouse suite was put on the market earlier this month for almost $35 million. 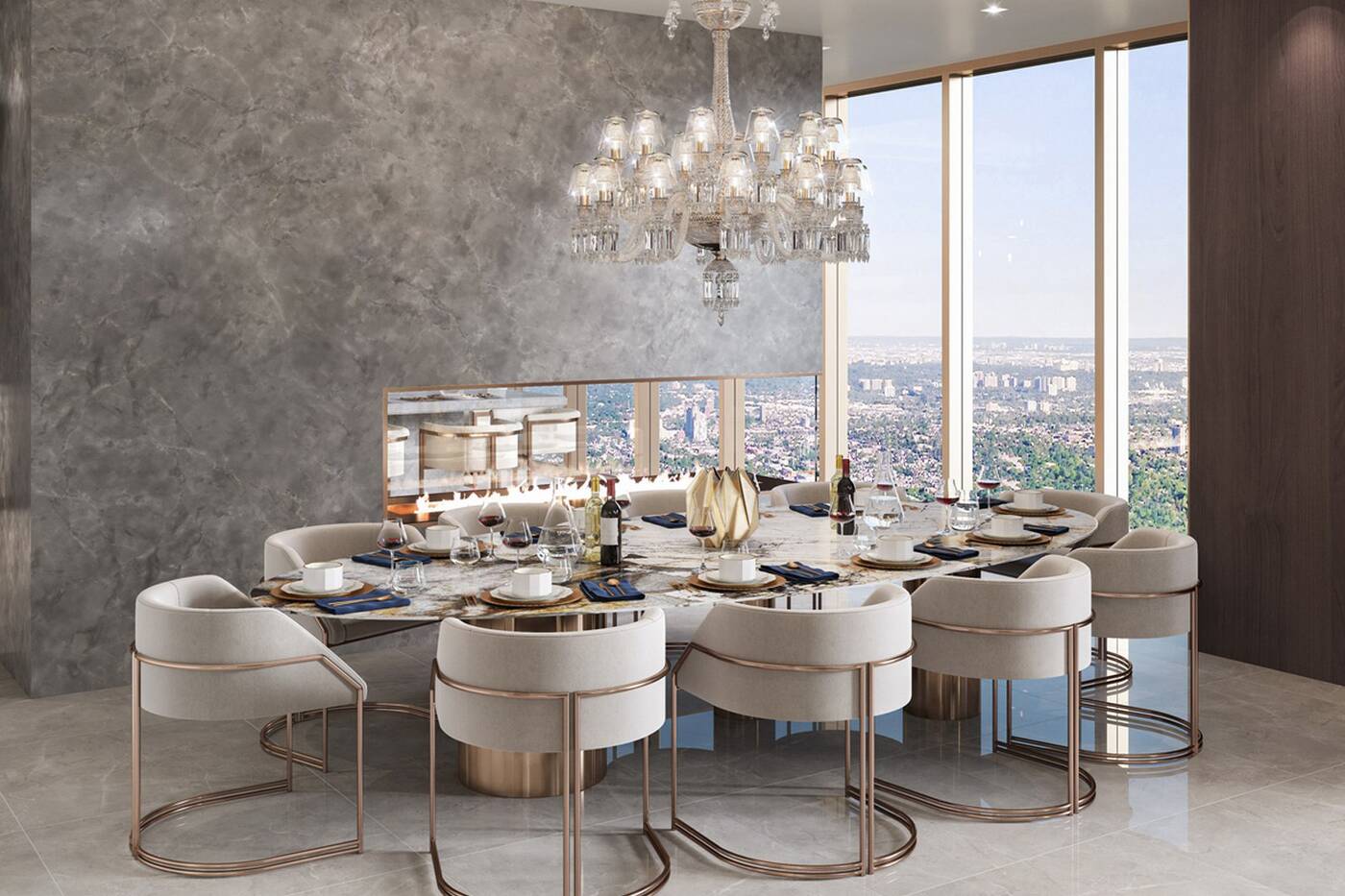 A dining room with a fireplace.

But regardless of if you're buying the $35 million, $32 million or the $3 million suite the condo will be stunning. 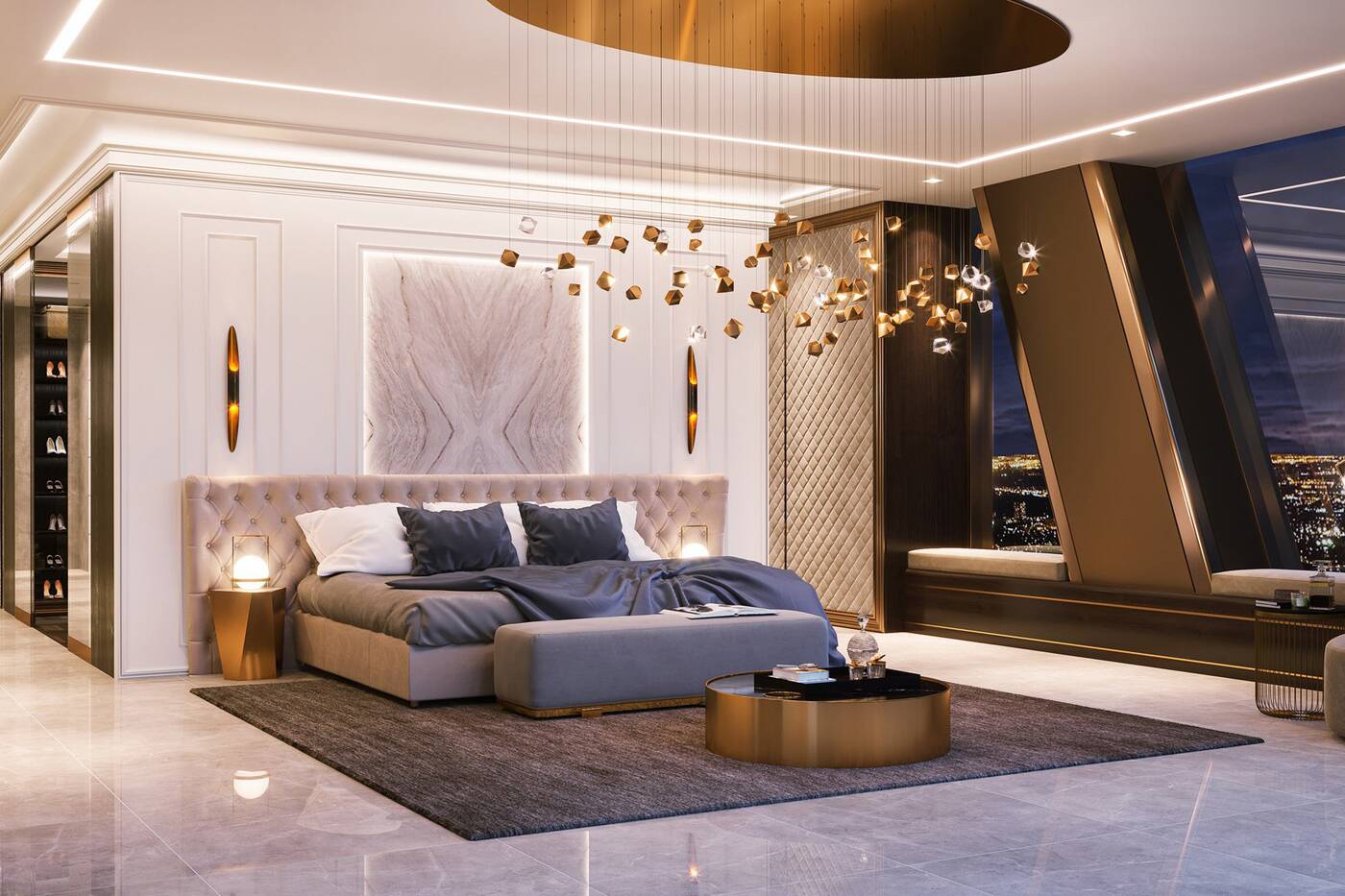 The listing notes the suites will include "sleek interiors of marble and wood, opulent metallic tones." 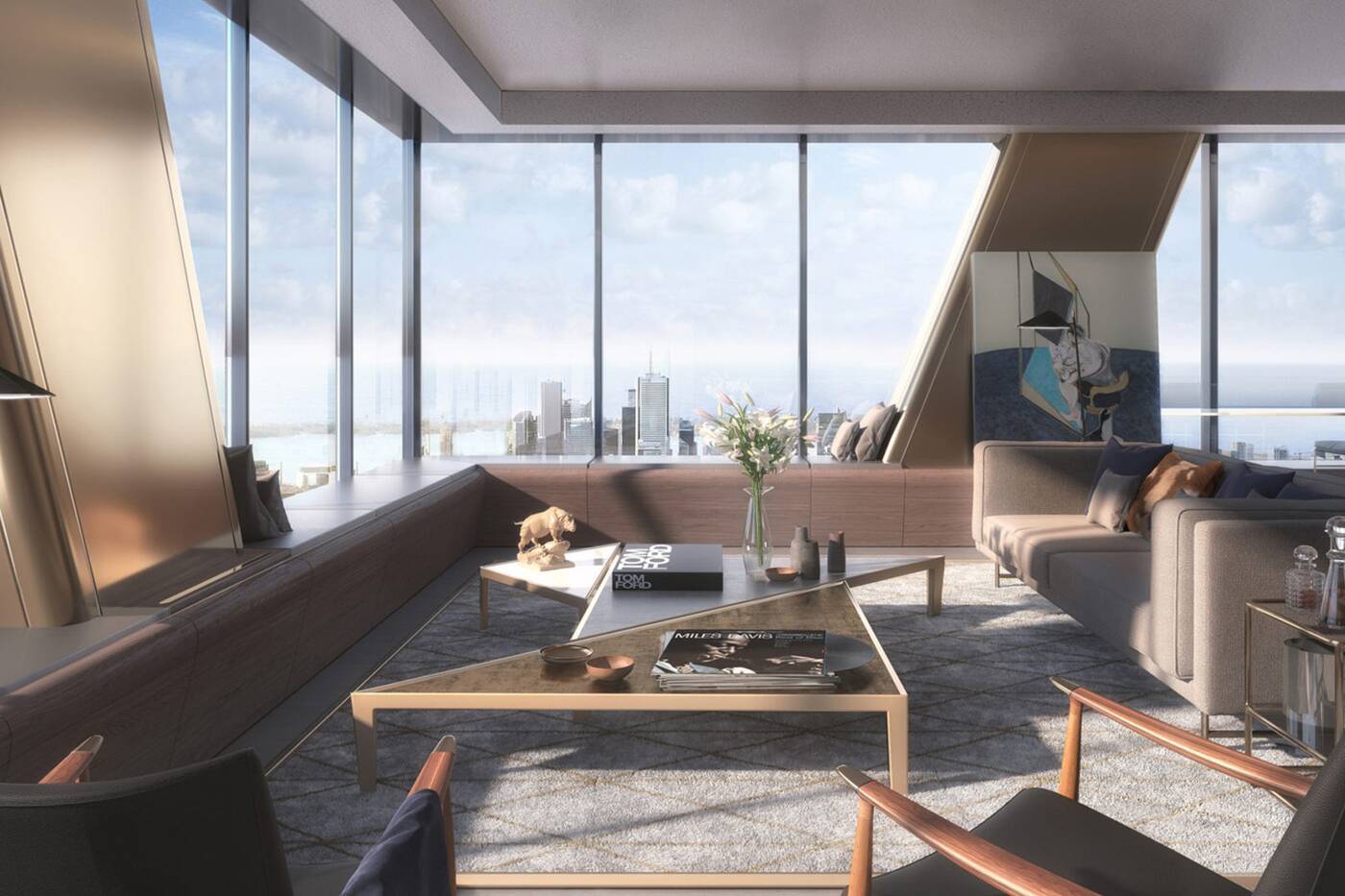 Additionally there's "sunlight from every angle" and glorious views of the Toronto skyline. 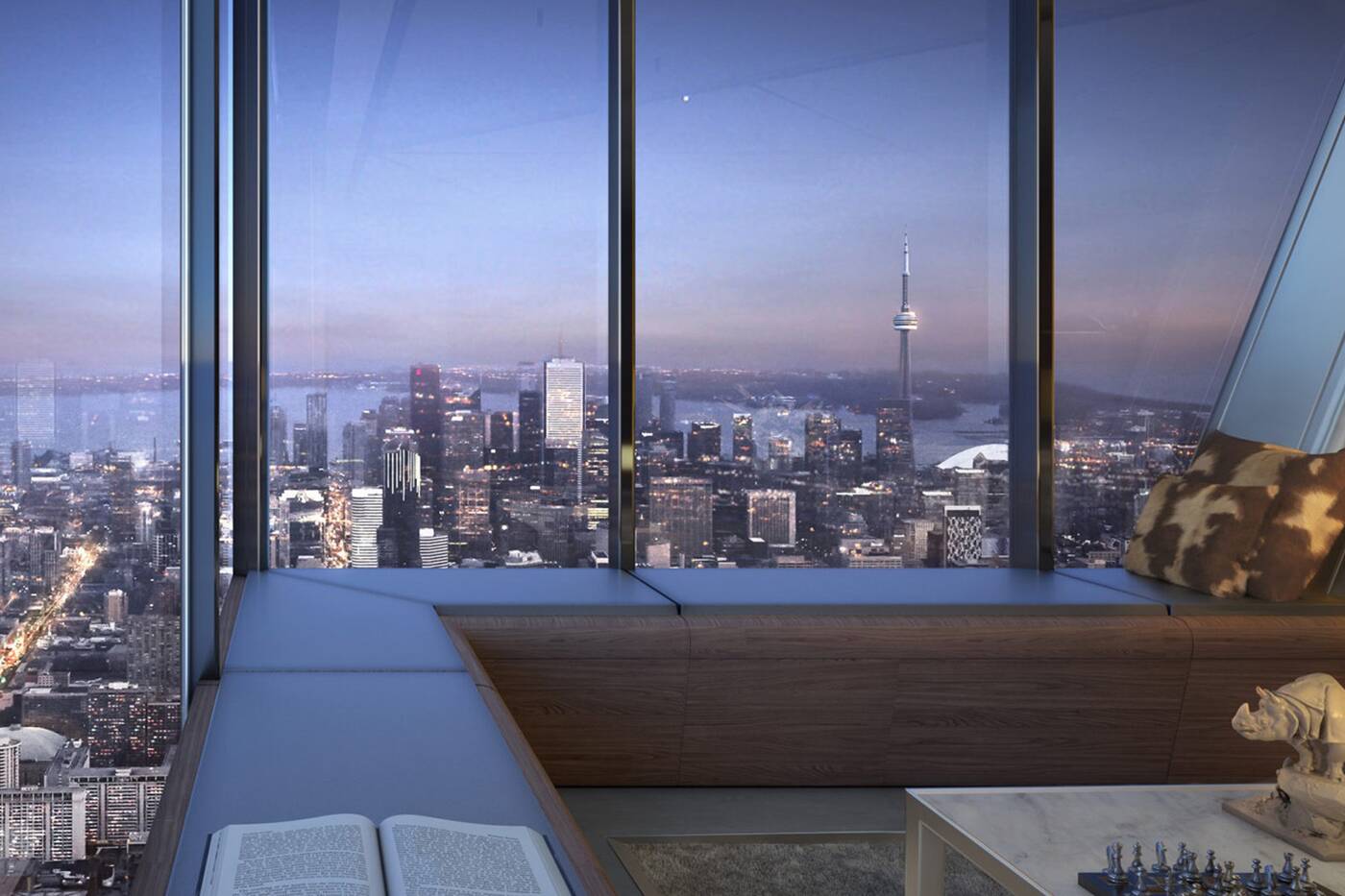 From the renderings, the suites are a balance of modern and traditional design with 10-foot coffered ceilings, custom built benches by the windows to take in the views, and eat-in kitchens, among other luxury finishes and features. 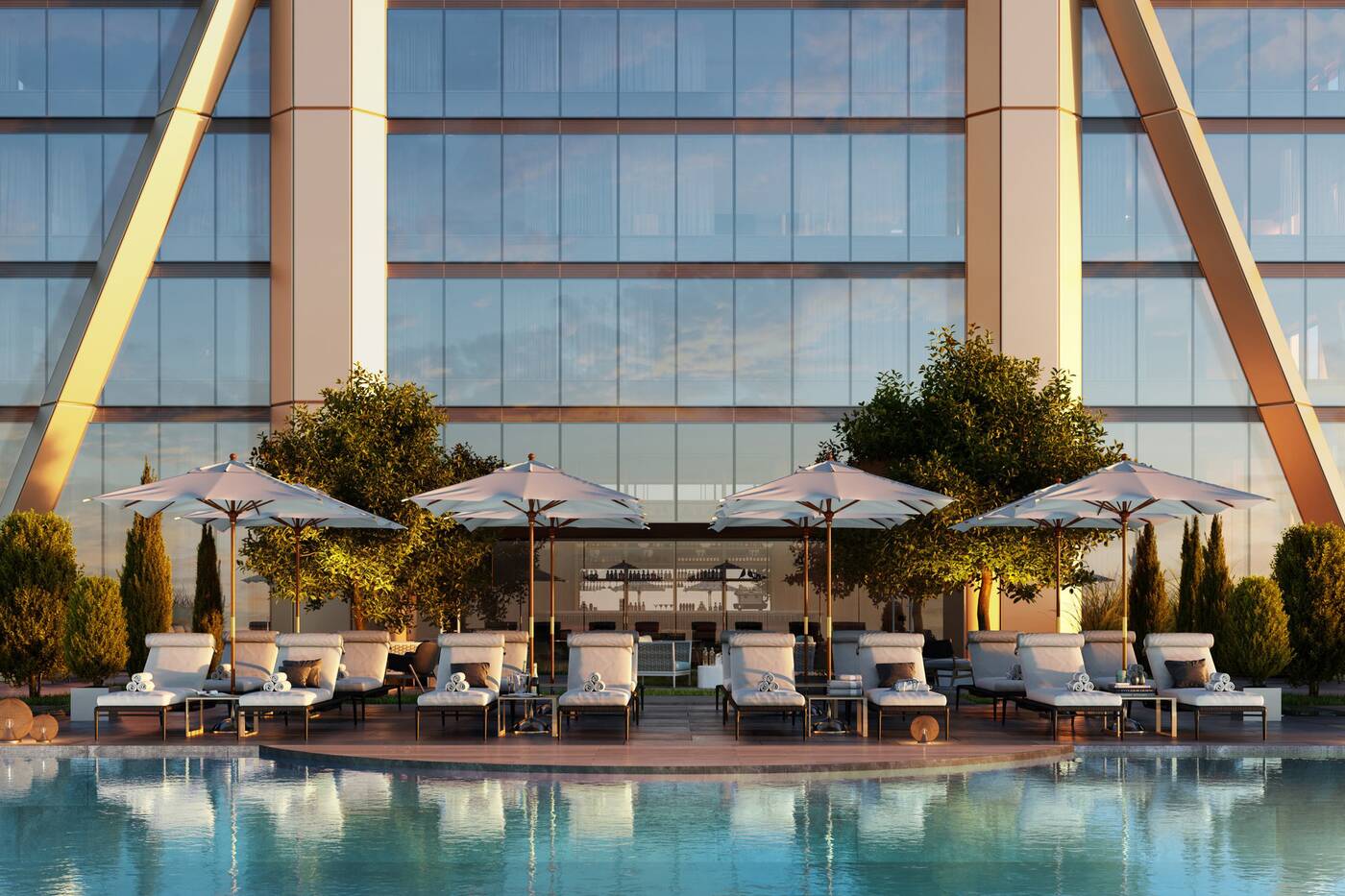 The building itself also boasts plenty of amenities including 24-hour concierge service, valet parking, a spa, a garden terrace, a lobby bar, an exercise centre and more.

And while all that sounds divine, $32 million is still a lot to invest for a building that doesn't even have a solid completion date. 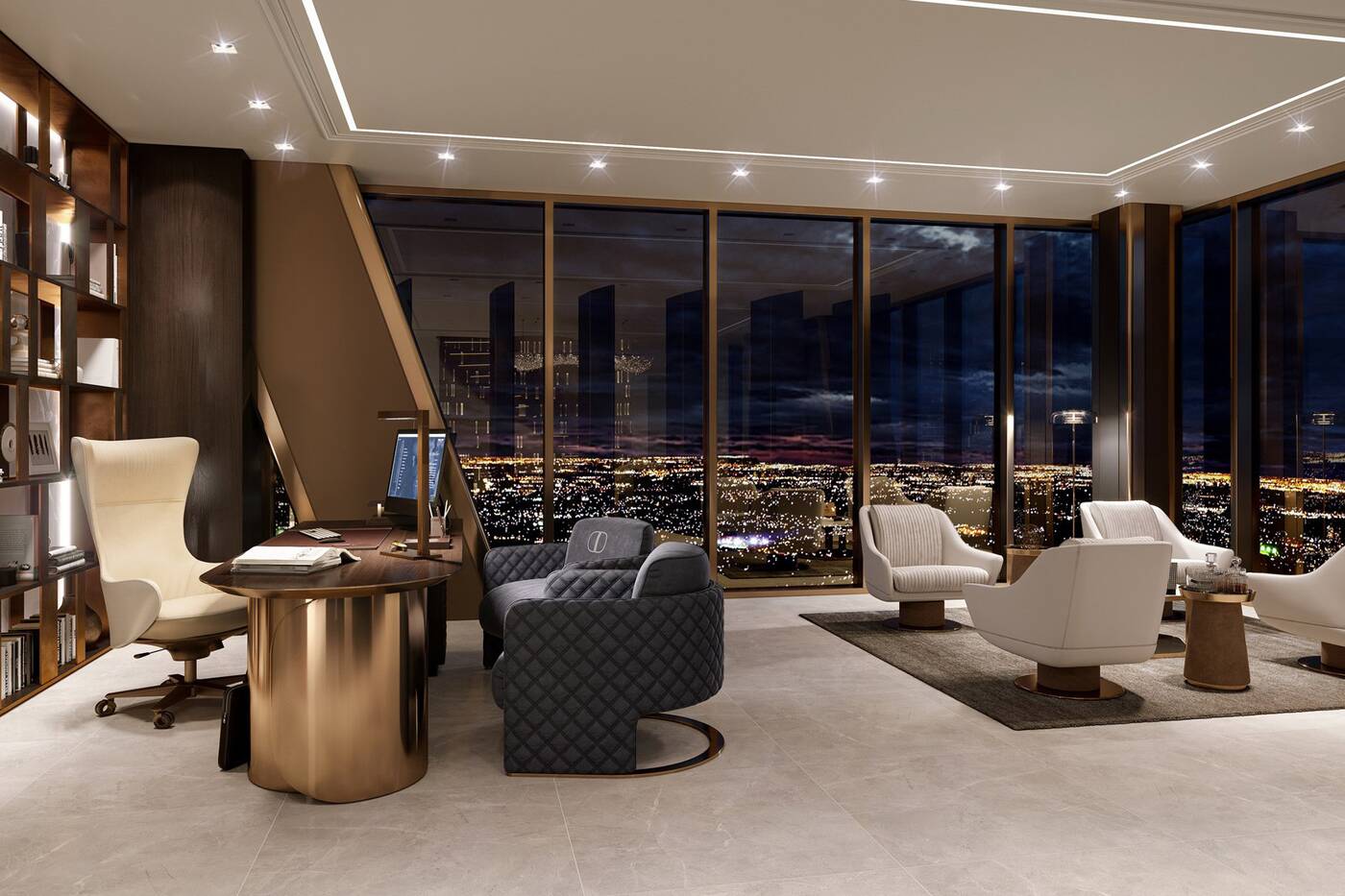 An office with views of the city.

Originally the building was supposed to be finished next year but with delays caused by the pandemic and planning hurdles the date has been pushed back to 2023.

But even that might be optimistic considering they only just finished the pouring and setting the concrete of the sixth storey last month. 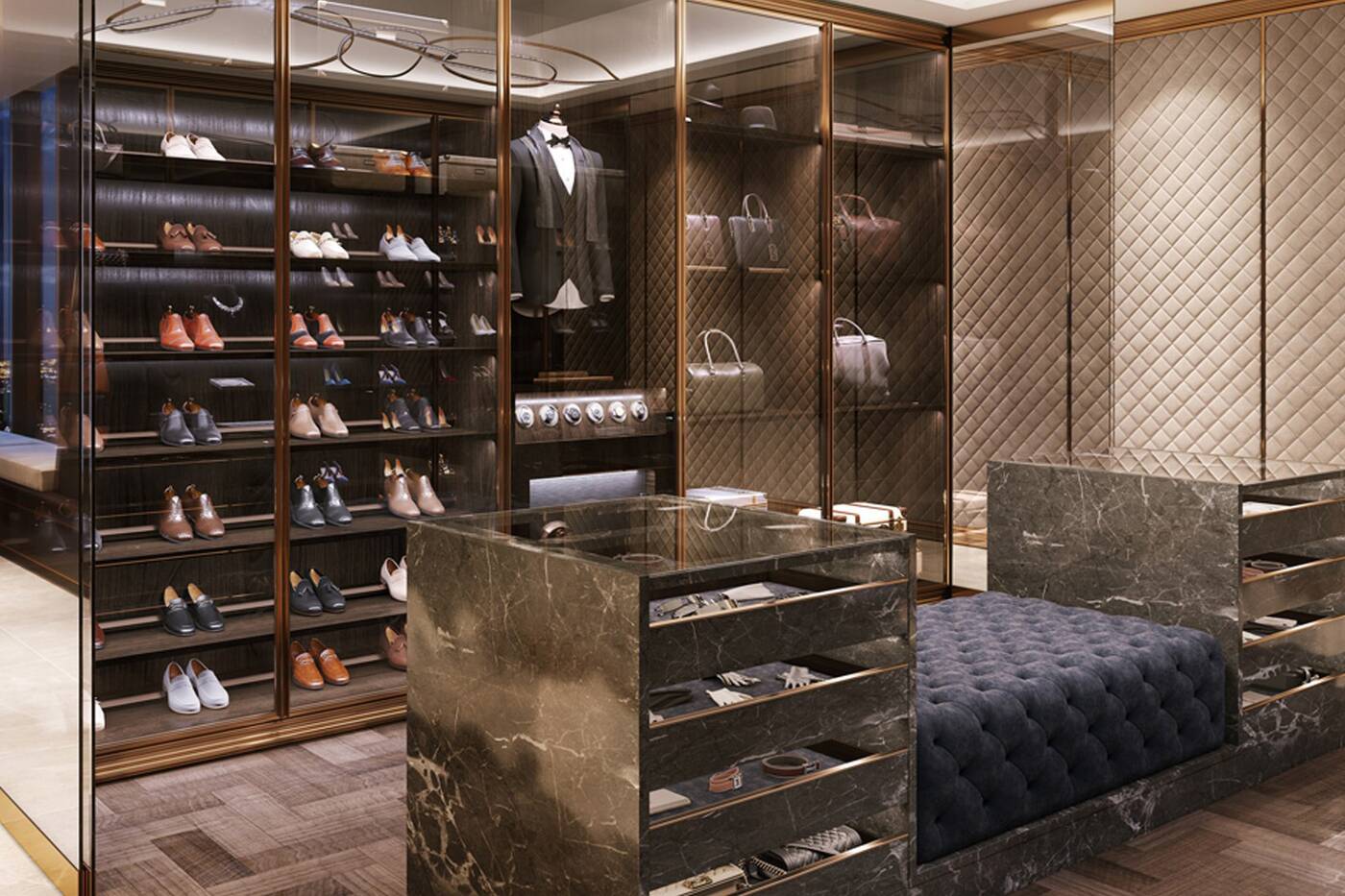 Also Mizrahi Development is in the process of trying to get the permits to extend the height of this Foster + Partners and Core Architects designed building to 338.3 metres. 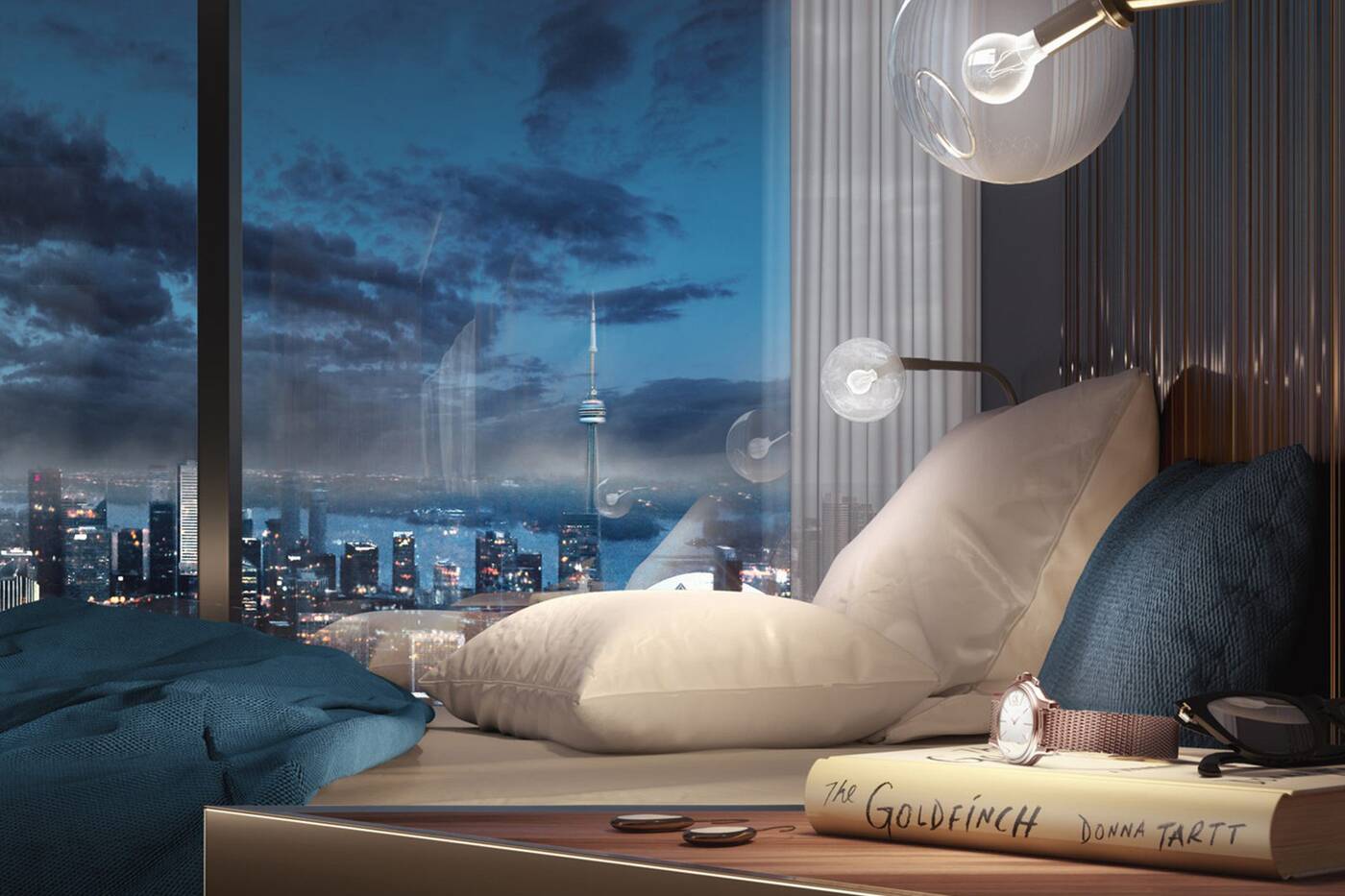 The views you could have from your bed.

They want to make it 94-storeys, which, if granted, would make The One the tallest building in the country.

So if you want to move into a place sooner rather than later you might want to give this place a pass.