After lockdowns prompted a mass exodus of people from Toronto to nearby towns or cheaper Canadian cities — which in turn spurred a drop in average rents and a rise in vacancy rates in the city — the city's rental market has been on the upswing for some weeks now, even though many residents are still considering leaving.

The latest data from the industry experts at Urbanation proves that the time to rent an apartment for a bargain price in Canada's biggest metropolis has indeed come and gone, with prices continuing to climb quarter-over-quarter this year amid declining supply.

The overall vacancy rate among GTA purpose-built rental apartment buildings has, as of Q3 of 2021, dropped to three per cent (from 5.1 per cent in Q2 and 6.4 per cent in Q1), according to the firm's latest market survey.

And, for the first time since the health crisis began, Urbanation noted an annual rent increase in the region — only 1.7 per cent, but still a milestone indicating the direction of the market.

This is, the company notes, largely due to a glut of recently-completed, pricier buildings, which drove average rents (in buildings constructed after 2005, mind you) to $2,389 for all unit sizes, or $3.30 per square foot. 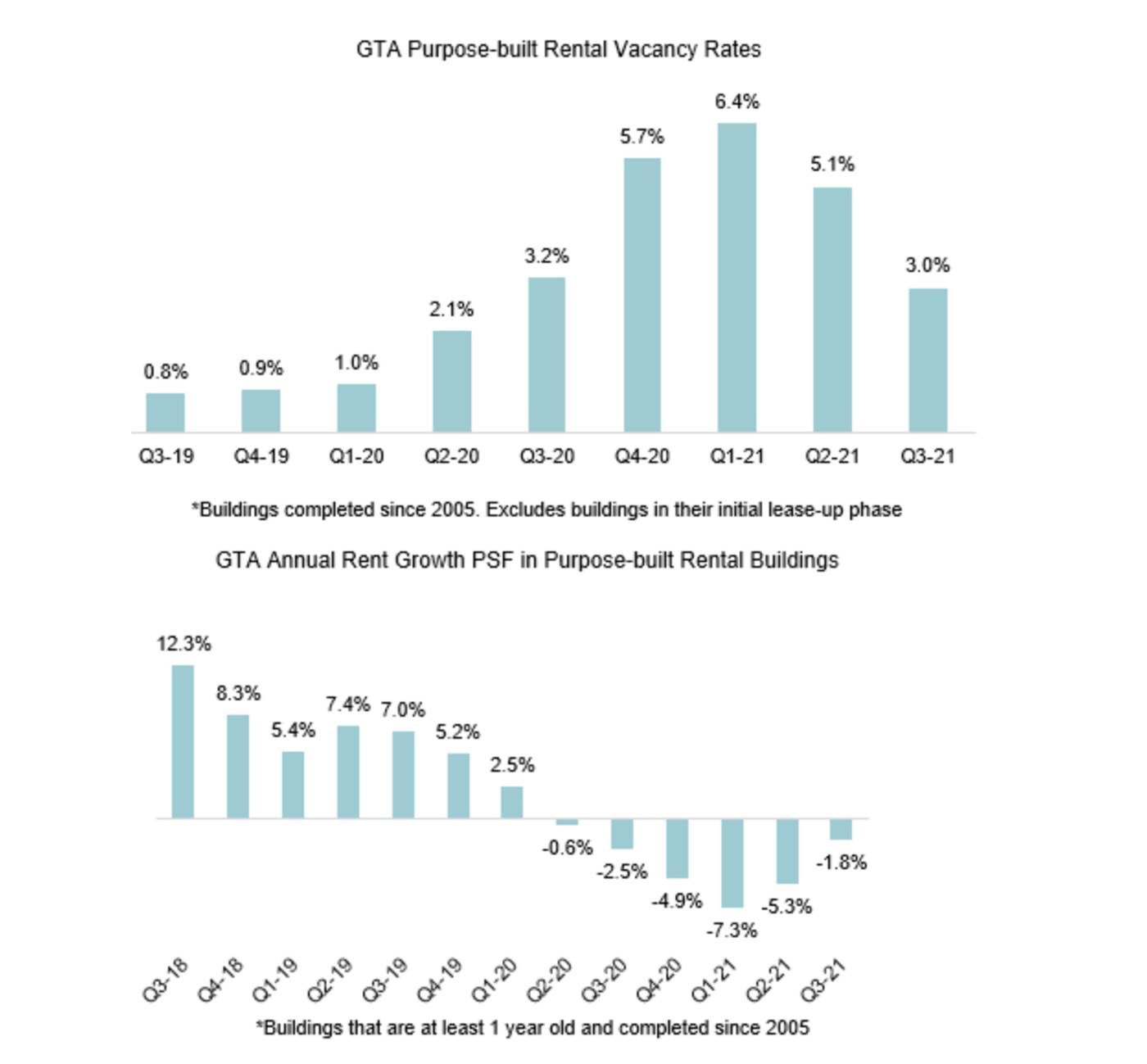 The change in average rent prices and vacancy rates in purpose-built rentals in the GTA from Q3 2019 to Q3 2021. Chart from Urbanation.

Also notable in this chunk of the year was the beginning of the slow death of all of the bonkers offers of months of free rent and other incentives that buildings were offering in a last ditch attempt to keep people in the downtown core and keep units filled: 57 per cent of purpose-built rentals were offering such incentives in Q3, vs. 88 per cent in Q2.

And, rentals of condo units specifically are soaring, with the number of units rented beating out Q3 2020 numbers by six per cent to hit a new record high of 13,969 for the quarter.

The number of listings for these types of units is drastically down compared to the surging number of leases signed and creeping prices, which have hit $2,304 (or $3.31 per square foot), on average. 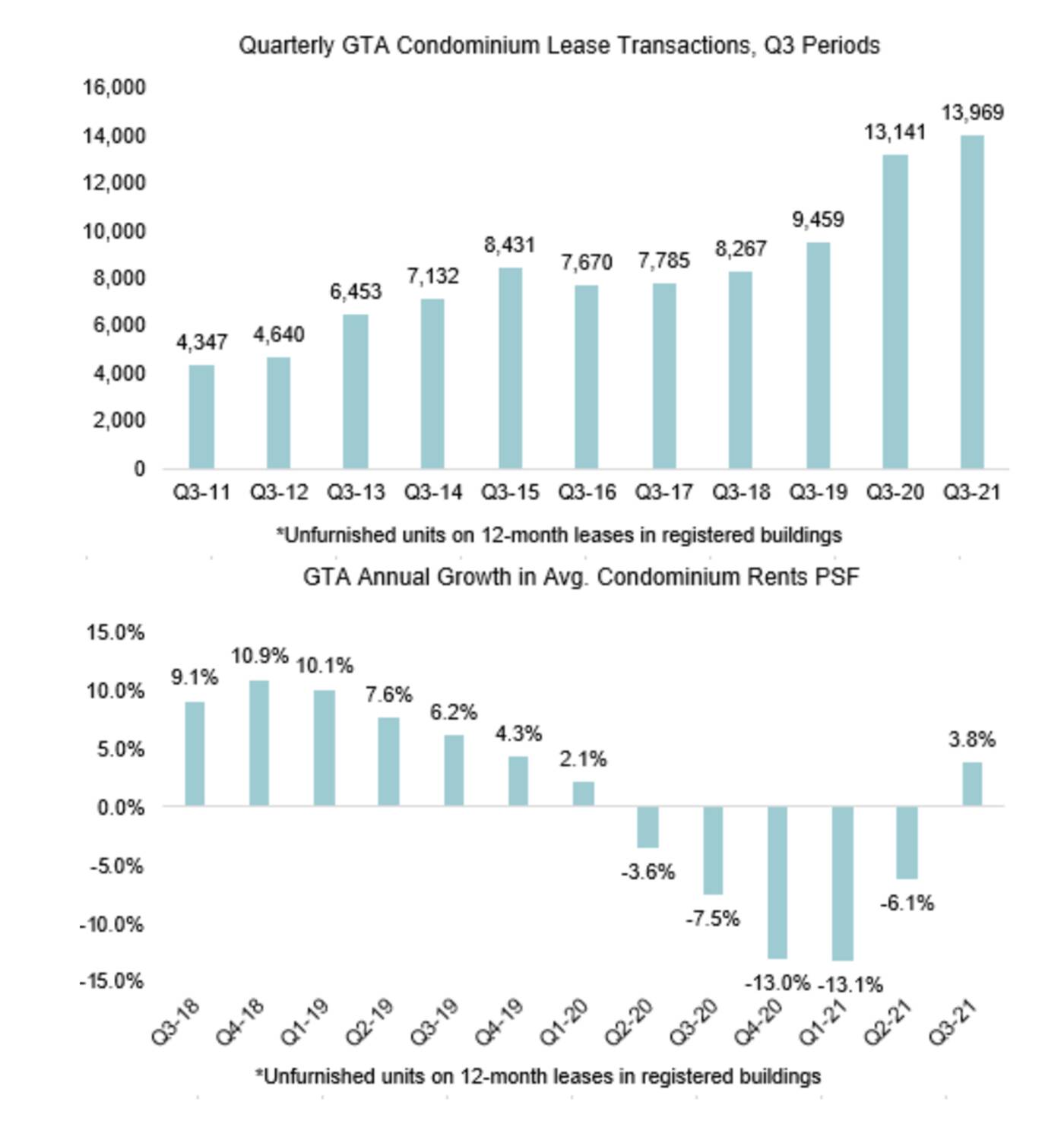 The change in lease volumes and average condominium rent prices rates in in the GTA over time. Chart from Urbanation.

"Active quarter-end listings dropped 69% from a year ago and equalled 0.7 months of supply based on lease volumes averaged over the past 12 months, which was the lowest amount of inventory on the market since Q3-2018," the report notes.

"The rental market recovery heated up considerably during the third quarter as economic restrictions continued to be lifted and the population began returning back to the core. The stage has now been set for the GTA rental market to return to pre-COVID levels in short order."

As exciting as it is that the city is essentially back to normal, we could definitely have done with a slower return of its notoriously competitive and expensive rental and housing prices.

And, with the province poised to end its year-long rent freeze, sectors of the economy reopening further and further and immigration on the rebound, rents are bound to keep on skyrocketing as we move into the end of 2021.