Only one U.S. city is now less affordable than Toronto and it's not one you'd expect

When Oxford Economics released its first housing affordability index for North America this past spring, people all over the world were surprised to learn that Toronto — humble, Canadian Toronto — had become less affordable in terms of housing than New York City, Los Angeles, Seattle or Miami.

This week, an updated version of that index was published, and things appear to have changed a bit.

Toronto is no longer the second-priciest metro area on the continent for housing. Vancouver does remain in first place, but the 6ix has been pushed down to spot number three by an unlikely contender: Boise, Idaho.

"Potential buyers will find homes most out of reach in Vancouver, Boise (Idaho), Toronto, Portland (Oregon), Hamilton (Ontario), Las Vegas, San Jose, and L.A.," writes Oxford in its latest report, which looks at the second quarter of 2021.

"Our consistent, cross-country framework points to more rapidly worsening affordability in Canada than in the U.S.," the report continues, warning of further predicted declines in large American cities along the Pacific coast and in the Southwest regions of America. "But affordability will decline faster in smaller metros in the region, such as Boise, Idaho." 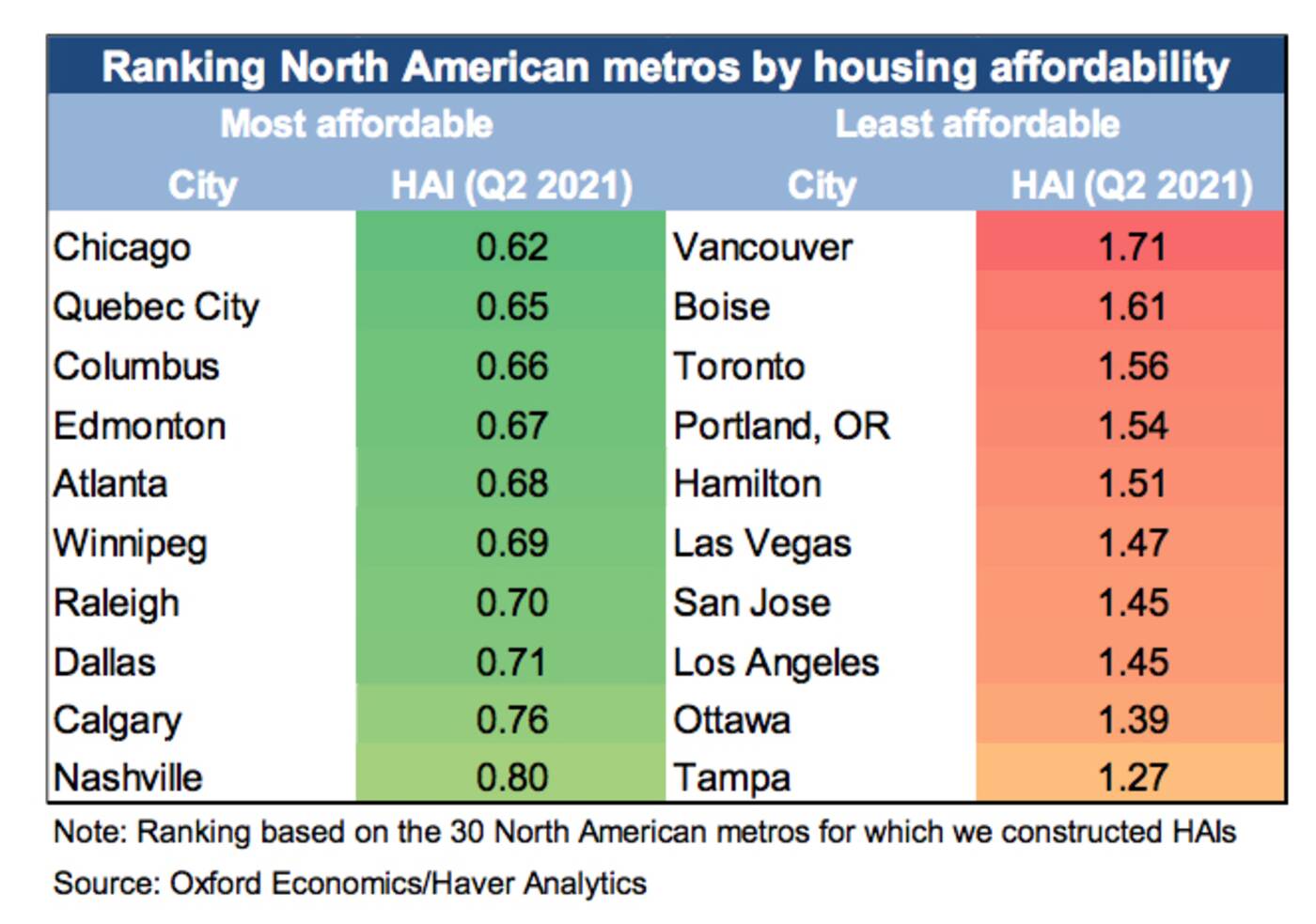 Oxford says that Housing has been 'persistently more out of reach' for Canadians than Americans in 2021 so far. Image via Oxford Economics.

Again, that's Boise — population 235,684. The capital of a state that, as of 2020, has fewer people living in it than the City of Toronto on its own but is apparently the most overpriced housing market in the U.S. right now.

Hey, we feel your pain here in Toronto, Boise; we're dealing with somewhat of an overpriced market ourselves, and affordability issues are only expected (by Oxford and other experts to get worse). Especially in Canada.

Canada's national HAI (which is calculated based on the price of a median single-family home compared to what a median-income household could afford) was sitting at 1.35 during the second quarter of 2021, according to Oxford.

This means that the typical home price was 35 per cent higher than what a median-income household could borrow — worse in Toronto and Vancouver which posted scores of 1.71 and 1.56 respectively. 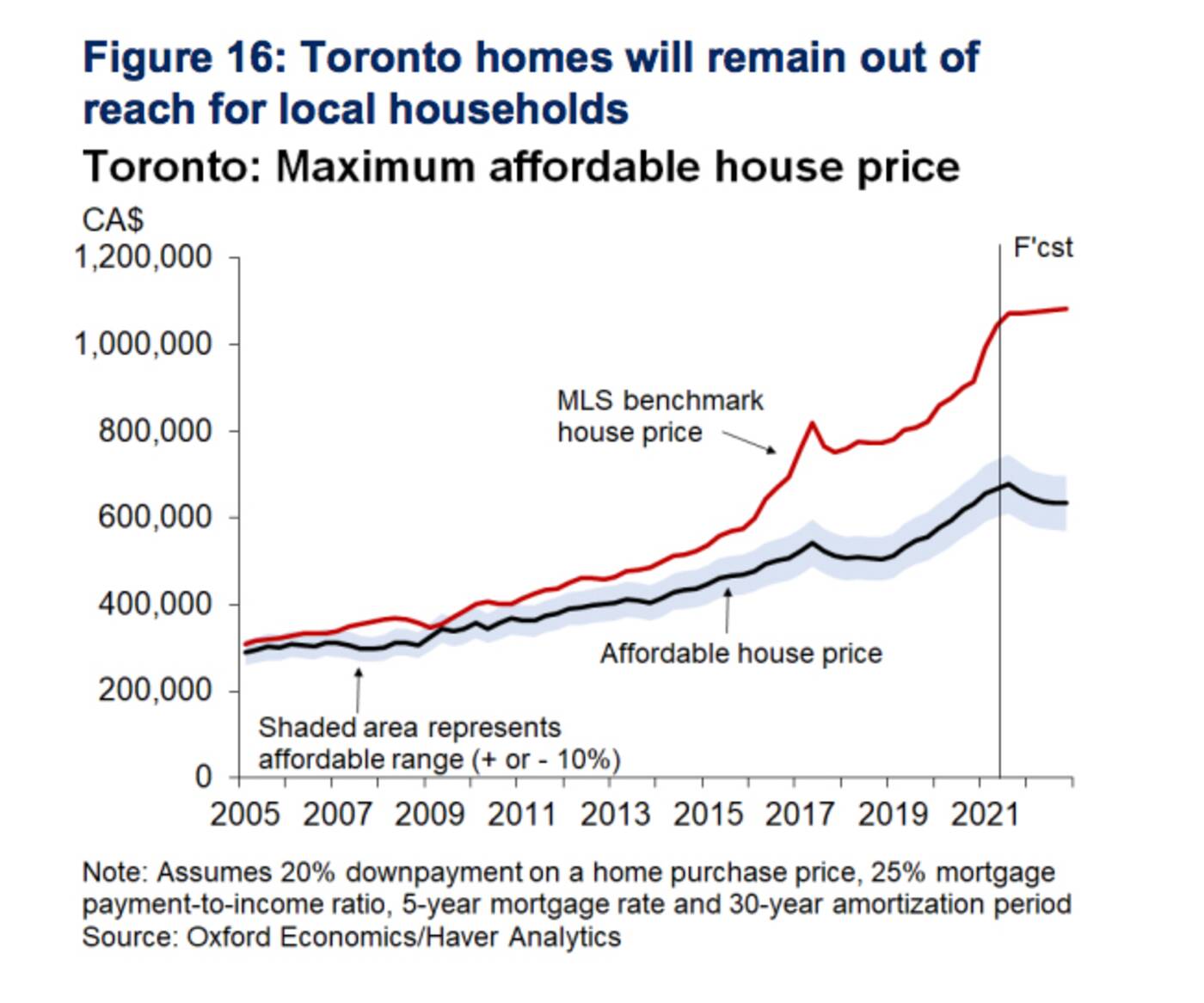 Canada is less affordable than the U.S. in general when it comes to housing right now. Image via Oxford Economics.

"Eight of nine Canadian metros for which we’ve built HAIs saw their affordability worsen in Q2 compared to Q1 2021," reads the report, as released on Monday. "Vancouver (+6pts) saw the largest q/q increase in its HAI, followed by Montreal (+5pts), Toronto (+5pts), Ottawa (+4pts), and Hamilton (+3pts), as higher home prices in these regions were only partially offset by lower mortgage rates."

The analysis and forecasting firm says that this is the result of home price inflation outpacing income growth. While a problem for both countries, the U.S. is faring quite a bit better with an index level of 0.77 (meaning prices were 23 per cent lower than what a median-income households could afford.)

"Our consistent, cross-country framework points to more rapidly worsening affordability in Canada than in the U.S.," write Oxford's economists.

"Affordability is expected to worsen next year [in Canada], despite our forecast for a plateauing of house prices, as mortgage rates rise from historically low levels."