These massive towers will replace the LCBO buildings on Toronto's waterfront

Toronto is undergoing a vertical growth spurt unlike any of the building booms the city has experienced in past generations. And the skyline is only going to get taller with a new wave of megalithic structures already under construction or in the planning and approval stages.

The waterfront has become especially appealing for developers looking to make their mark on the skyline, home to some of the tallest projects unfolding anywhere in Canada.

One such site is the sprawling LCBO lands including the booze retailer's head office, warehouses, and a sea of surface parking stretching from Queens Quay in the south to Lake Shore Boulevard in the north.

Sold to Menkes Developments by the province back in 2016 for a staggering price tag of $260 million, plans quickly began to materialize for a multi-tower complex with some sky-scraping height, and shovels would be in the ground by the end of the following year.

Known as Sugar Wharf, the complex six-tower complex's first phase is moving along on the eastern half of the site. A 25-storey office building — including a new LCBO headquarters — is practically complete, while a pair of condo towers ascend towards heights of 70 and 64 storeys to the north.

But even taller towers are on the way with the upcoming second phase to bring three more skyscrapers (and a shorter building) to an evolving waterfront skyline. And these will be some of the tallest buildings Toronto has ever seen.

The latest changes to the proposal were submitted with city planners earlier in October, incorporating tweaks and refinements responding to comments earlier in the planning process, though none fundamentally alter the height or look of what would be built if approved.

With heights of 90, 87, and 79 storeys, along with the less notable 16-storey building, the architects—Alliance-designed second phase's taller buildings would appear among the most prominent in skyline views from the south and east. 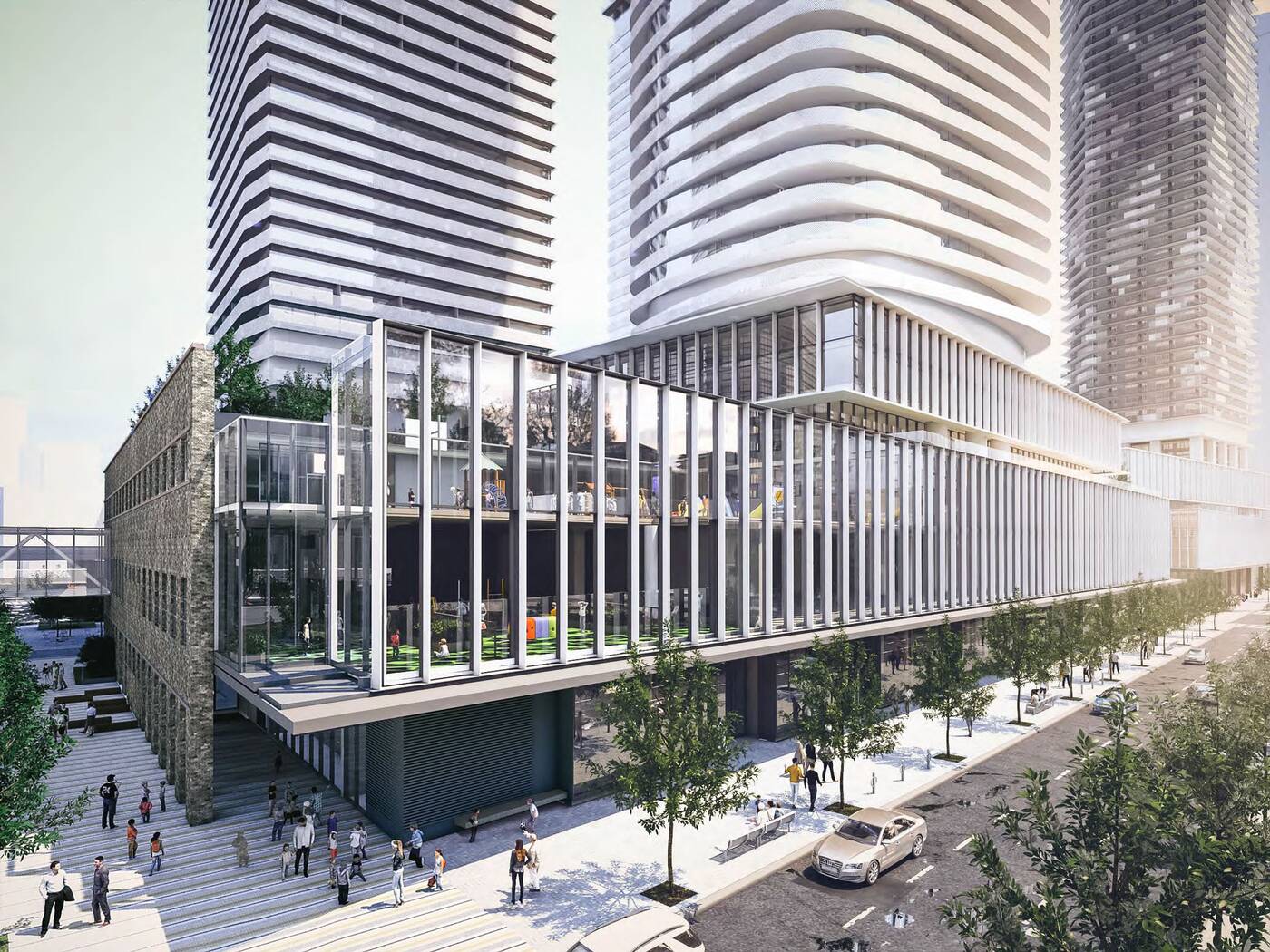 The towers would rise from a base mashing up modern design with existing heritage. Rendering by architects—Alliance via City of Toronto.

The tallest two will loom over Lake Shore Boulevard and the Gardiner Expressway at the north end of the block with matching stacked-box designs. The 79-storey tower, positioned at the site's interior, would feature more of a curvilinear look. 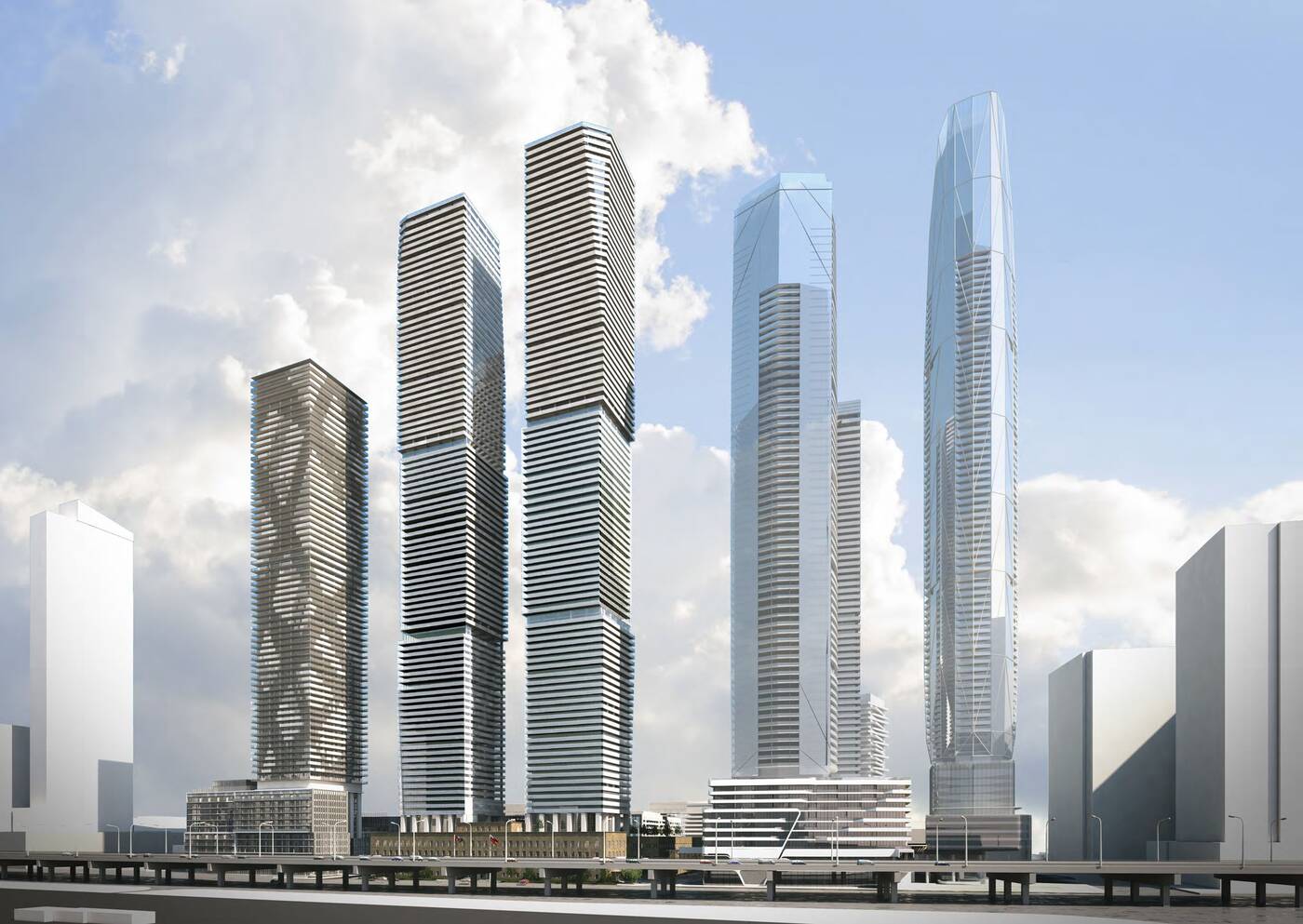 The two tallest towers (left of centre) obscure the 79-storey tower in this south-facing view. Phase 1 is on the left and Pinnacle's One Yonge complex on the right. Rendering by architects—Alliance via City of Toronto.

The development's base would include both retained and reconstructed sections of the existing office and warehouse buildings. 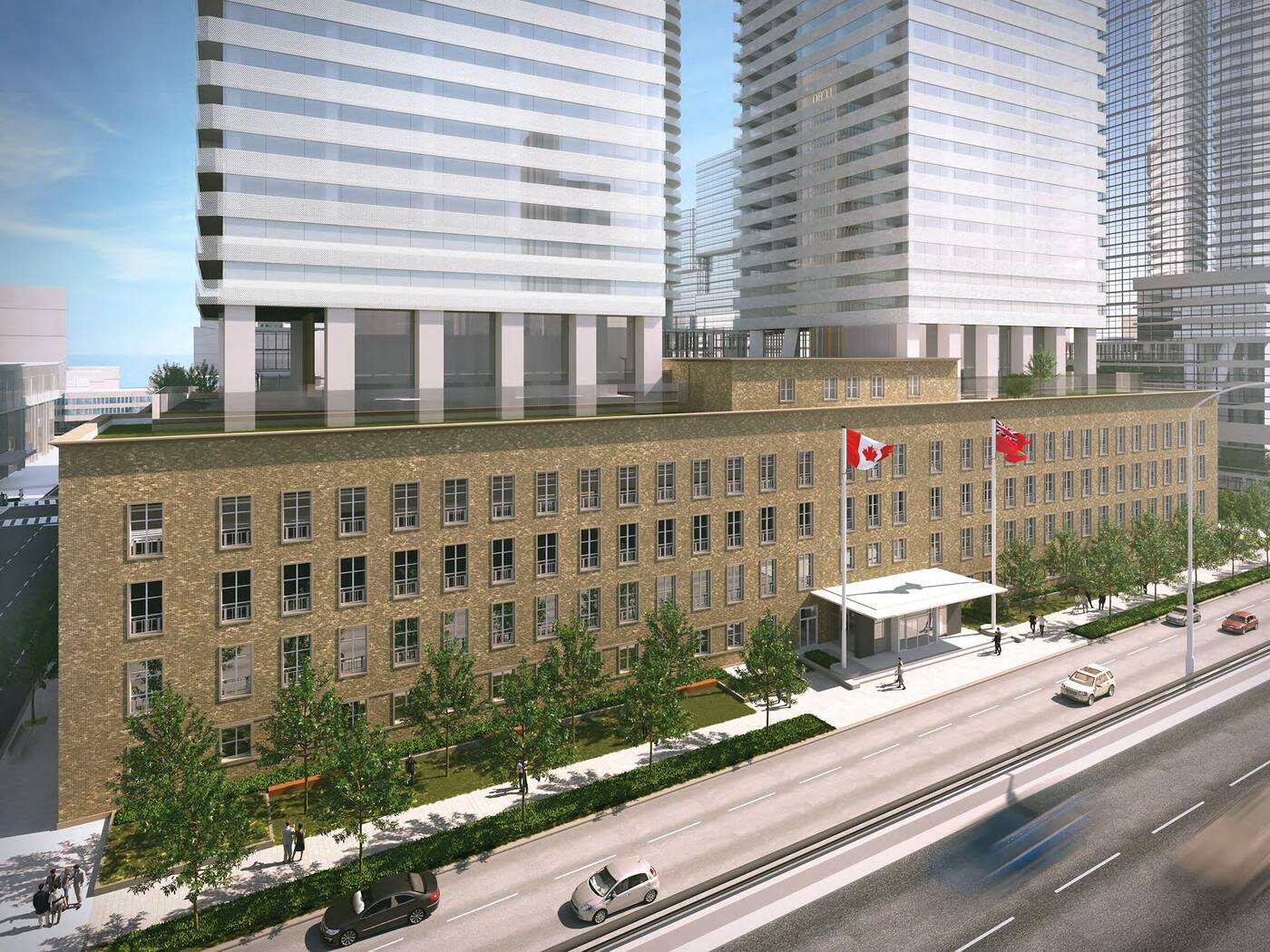 The towers would rise from a base that includes the retained facades of the existing buildings. Rendering by architects—Alliance via City of Toronto.

Much of the heritage retention will restore the original 1950s exteriors, though the reconstructed portion will be designed as a modern interpretation rather than a replica of the original. 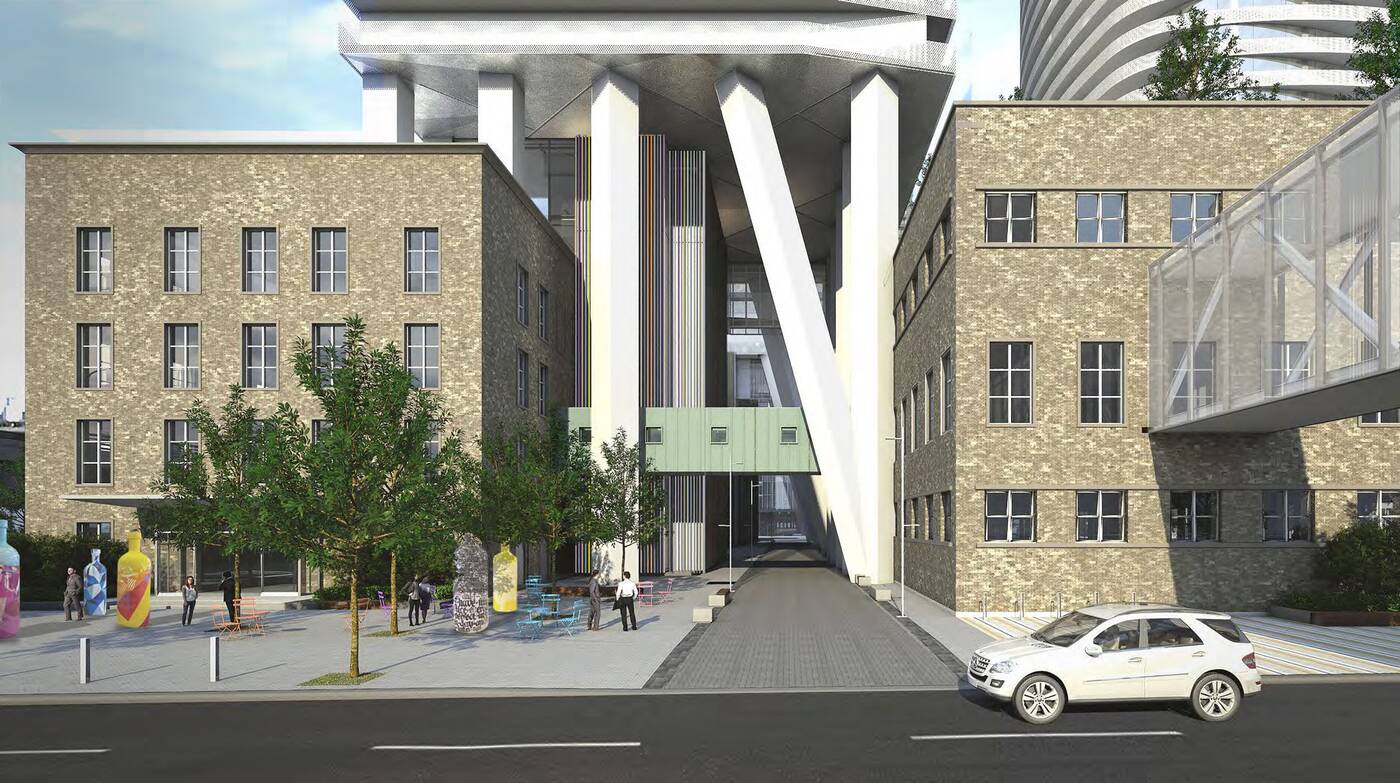 The towers would rise from a base that includes the retained facades of the existing buildings. Rendering by architects—Alliance via City of Toronto.

And Toronto would get oh, so many condos.

Over 3,000 condominium units would be infused into a stretch of the waterfront that had practically no residents just a decade earlier. This could present challenges for an area lacking the infrastructure to support such density.

Plans are in the works for an East Bayfront LRT, but the much-needed transit route along Queens Quay and into the Port Lands is still a decade away from reality.

Residents will still be a short walk from Union Station, and planned PATH connections will make the trip easy even in inclement weather. 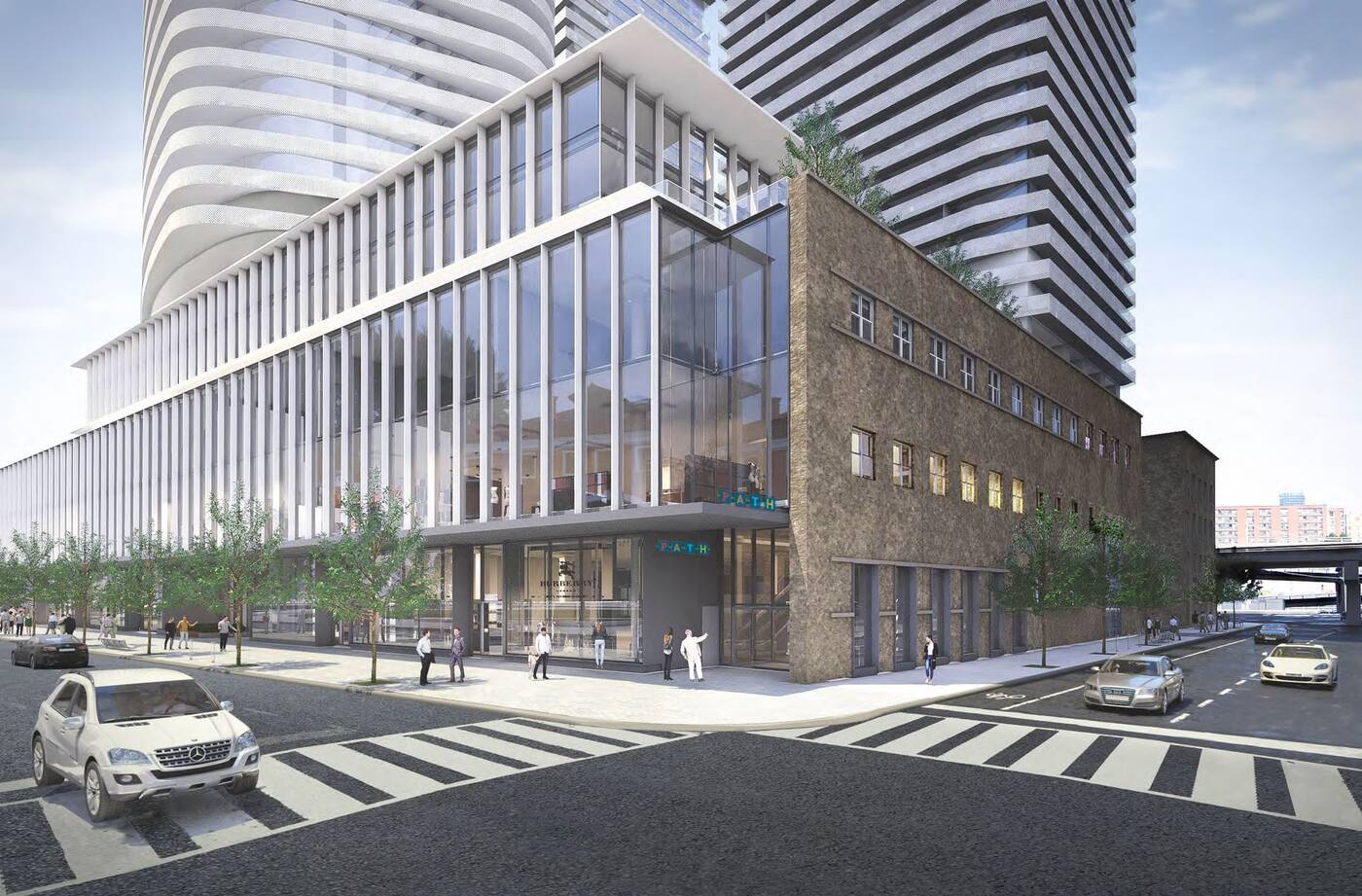 PATH signage visible at the base of the towers. Rendering by architects—Alliance via City of Toronto.

These would be the final buildings for the LCBO site, with the remaining southwest quadrant to become a new public park framed by skyscrapers.

architects—Alliance via City of Toronto