Tired of the high cost of rent and with no hope of buying, one Toronto couple decided to make their own tiny home in the back of a cube van.

"We were both sick of the rent in Toronto," Francis Hagendorn tells blogTO. "We were paying so much for rent, like $1,000 each for a one-bedroom, and it just felt like such a waste."

Hagendorn, a Toronto tattoo artist, and her partner (who didn't want to be named for this article), bought a 2012 Ford E450 cube van in January of 2020 and started work on it in March just as the pandemic started. They worked on it over the summer and left their Toronto apartment in October. 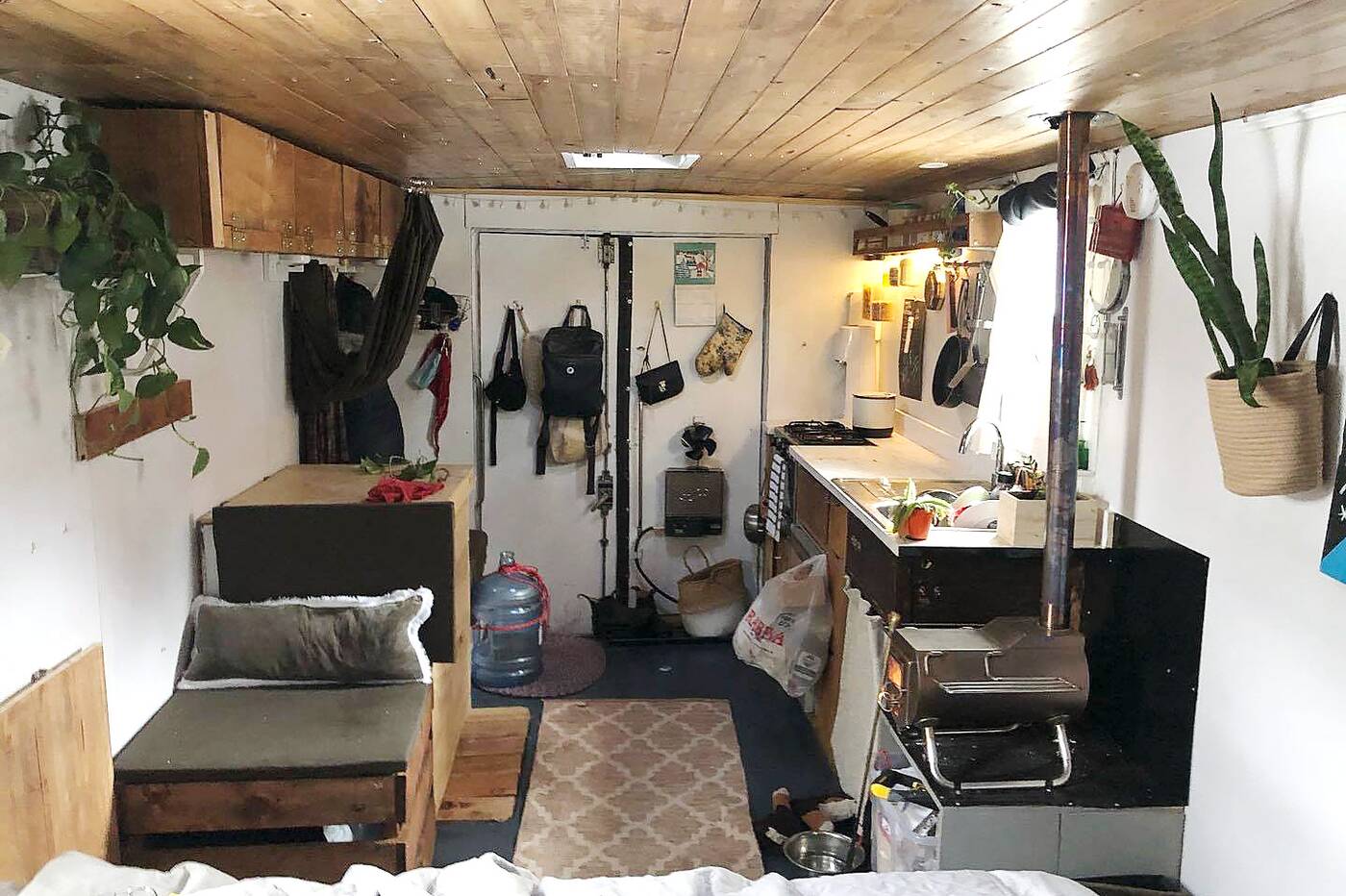 The cube van is small but they packed in a kitchen, bathroom, sofa and queen-size bed.

The cube van was just a bare shell when they bought it, and they set to work putting down a sub-floor and hired someone to add spray foam insulation to keep the van warm during cold winters. They added framing and plywood walls.

They added all the basics for a small home – a chemical toilet, shower, queen-size bed, kitchen with a fridge and a sofa. They did research on YouTube on how to build it.

"We have never done anything like this before," Hagendorn says, "and it took a long time." 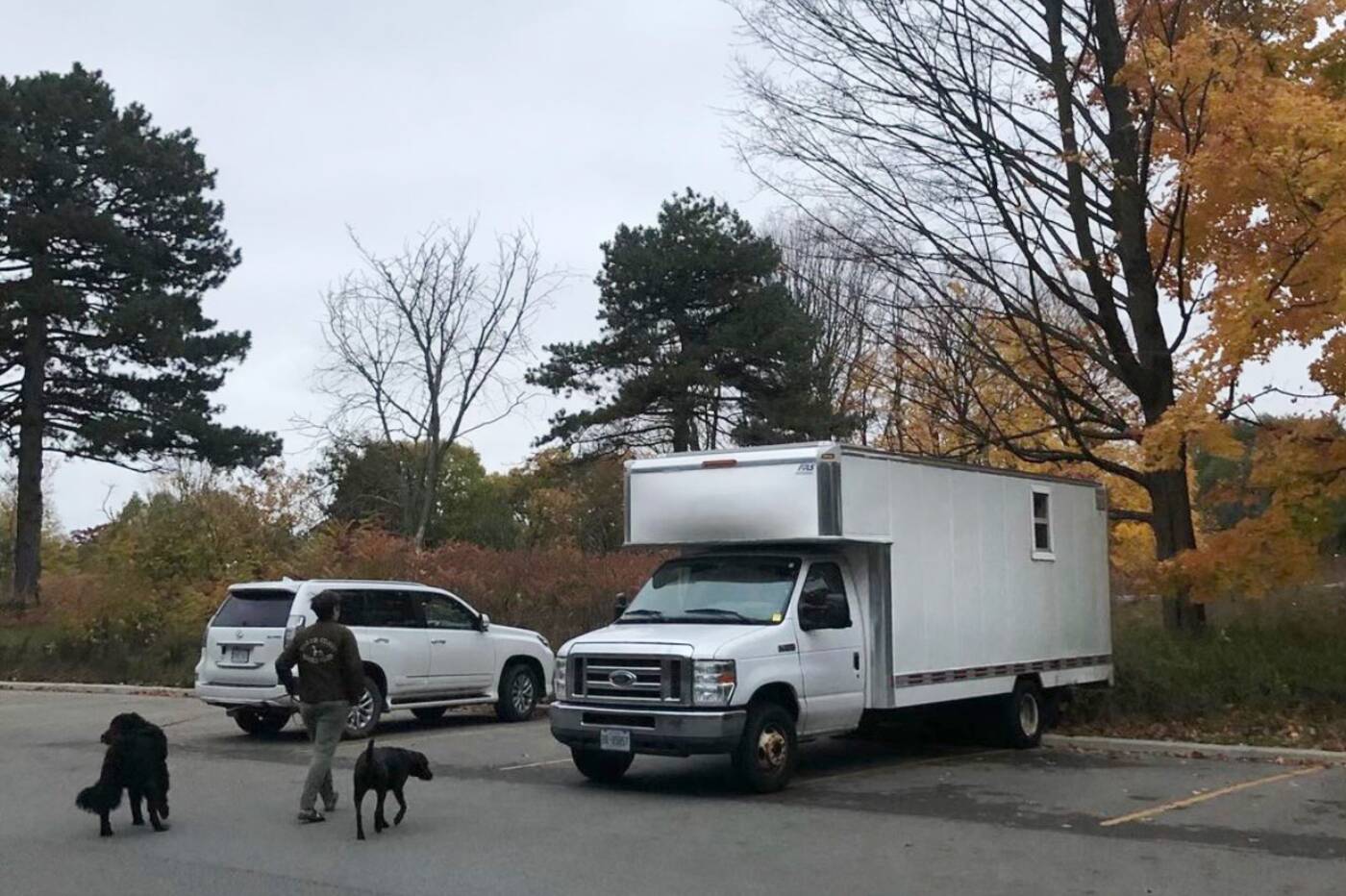 The couple has two large dogs and they enjoy walks in High Park.

The appliances are connected to solar power, and it is heated with a small wood-burning tent stove and a propane heater.

"Sometimes it gets too warm because it is such a little box."

In October, they moved into the cube van with their two large dogs and started a nomadic life, parking the vehicle around the city. Big-box stores are their go-to spot for parking overnight.

During the day, they move around the city and find spots near High Park or Cherry Beach. 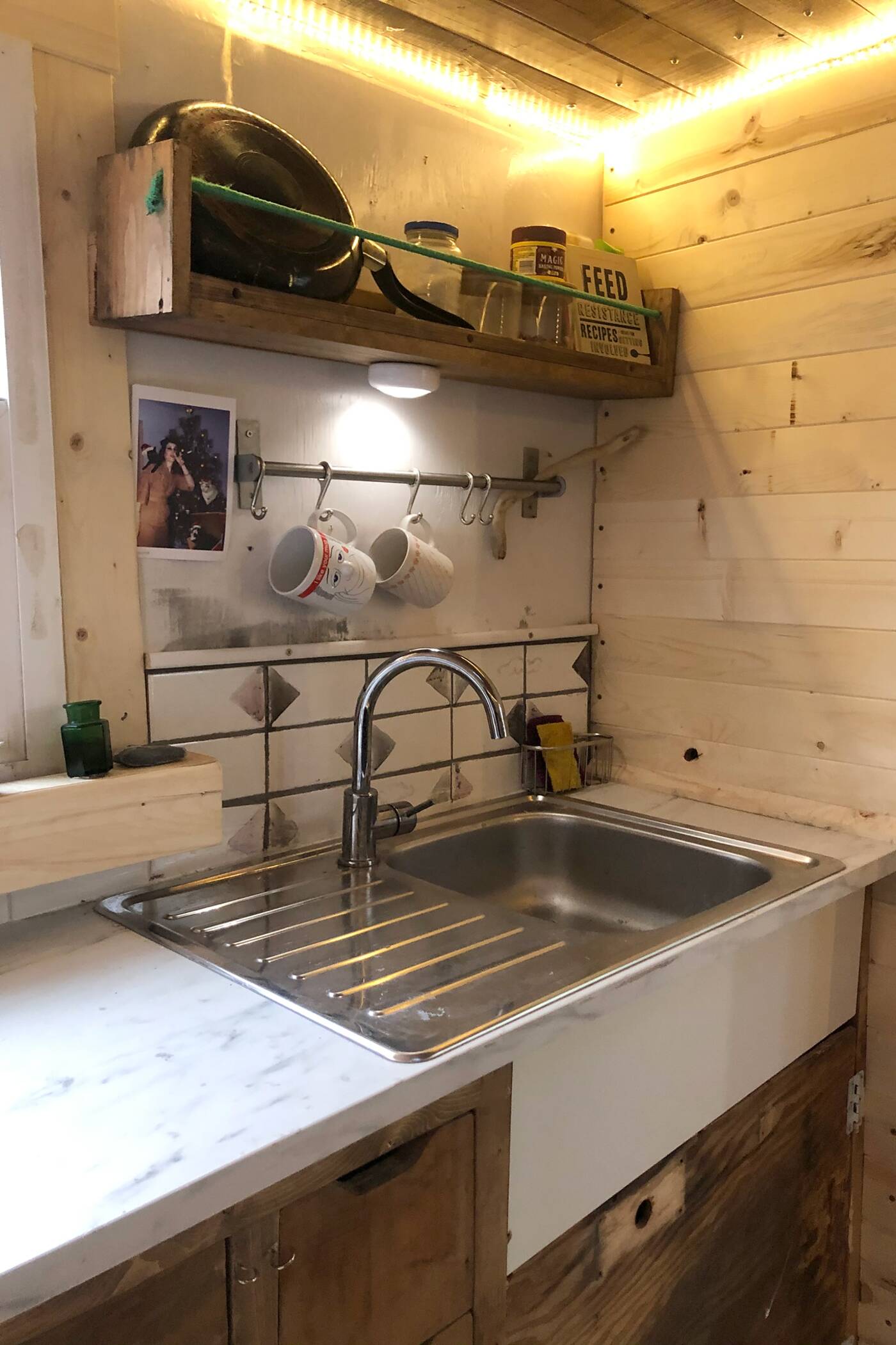 They have warm running water in the kitchen and shower.

Family and friends have mixed reactions to their choice to live in a cube van.

"Whenever I tell anybody, their reaction is either – 'Wow that's so cool!' or 'You are absolutely insane for doing this.'"

Some people think they are basically homeless but that is not how Hagendorn sees it. 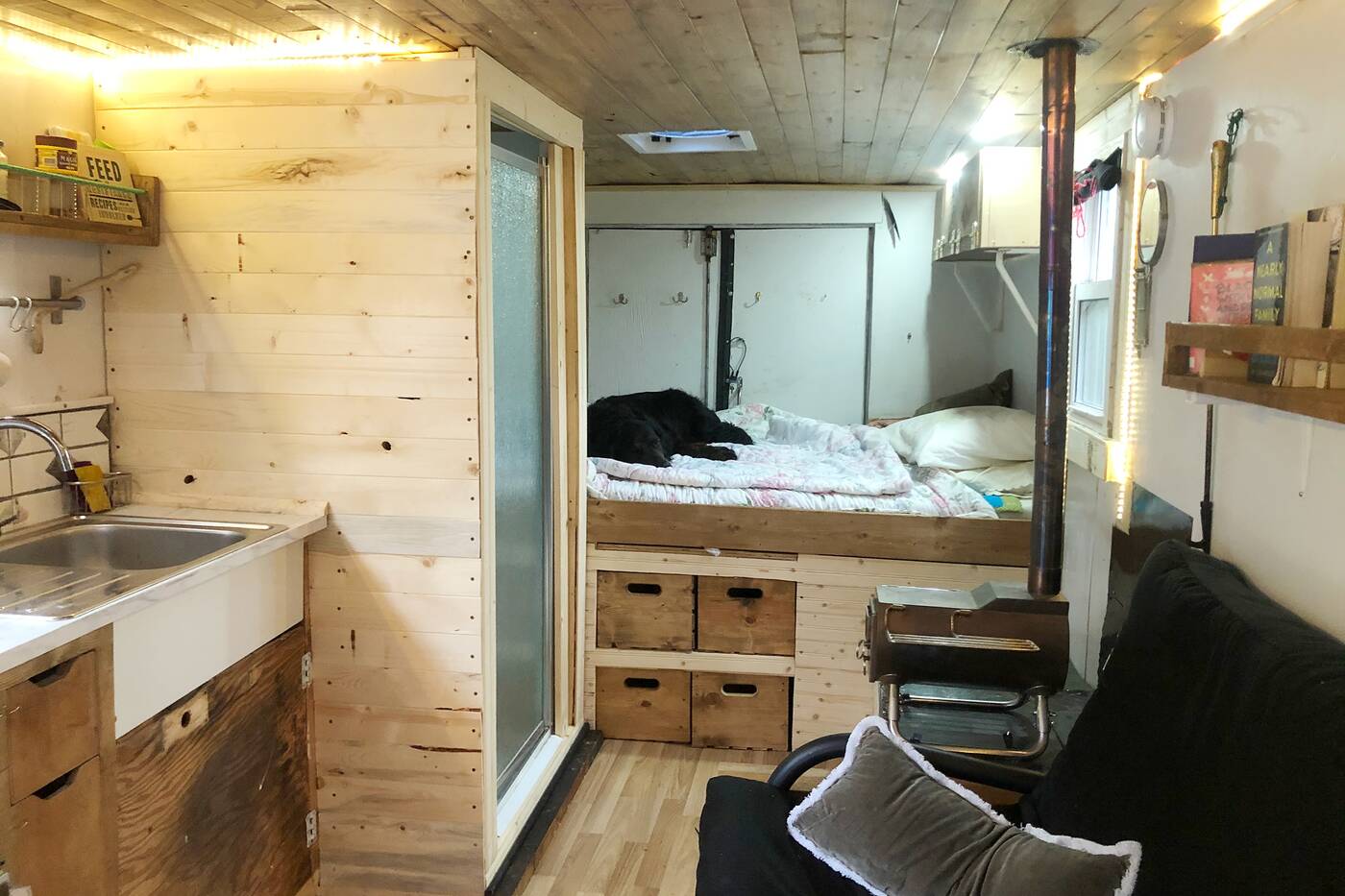 They have space for a shower and a sofa.

"It's just like any other apartment," she says. "We have running water, we have hot water."

Sometimes Hagendorn feels nervous about telling people she lives in a van, but mostly she is proud of what they have achieved.

"It's pretty great knowing that I built something from scratch and it's my home," she said. "It is super satisfying." 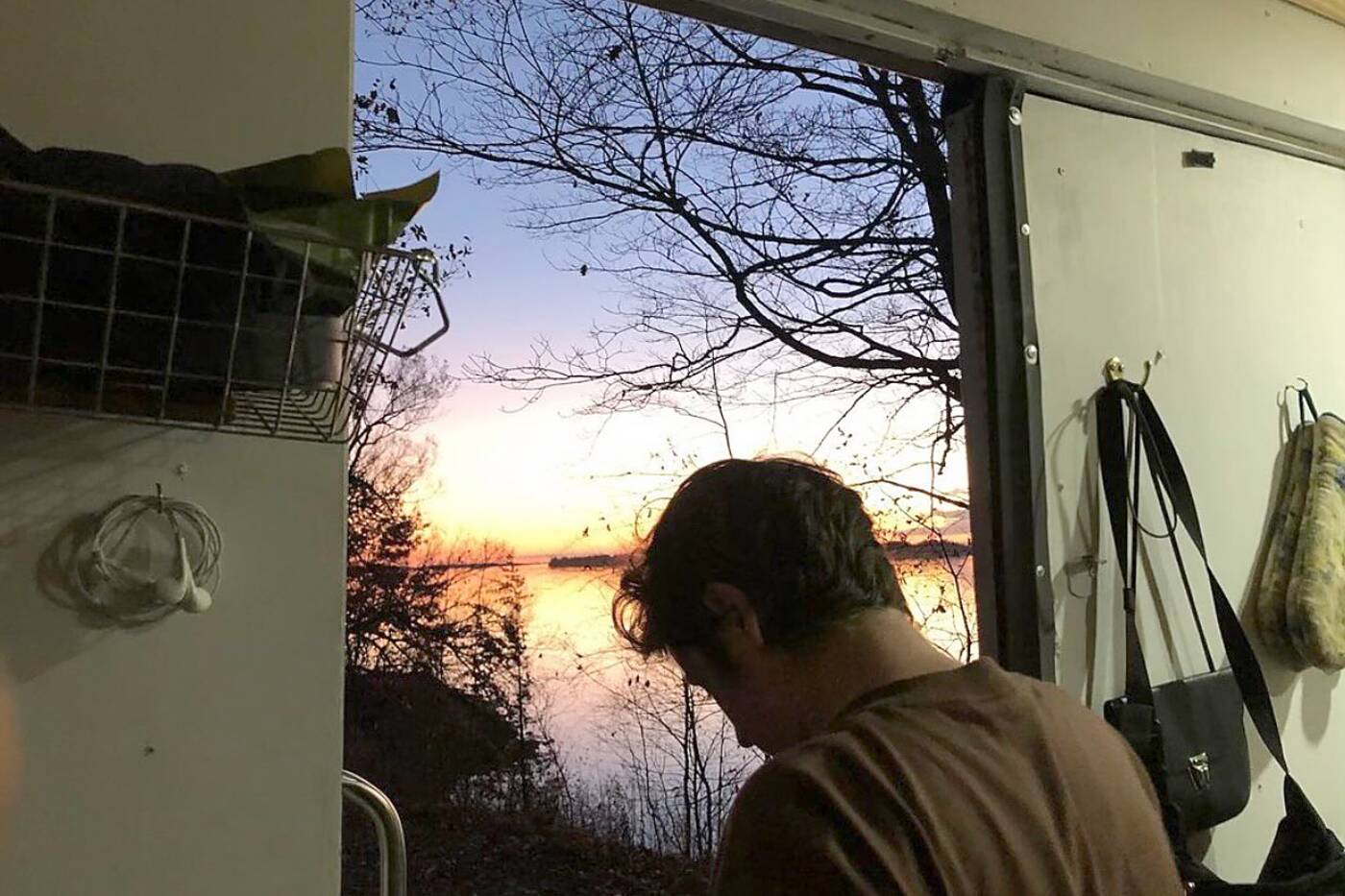 It is nice to open the door and be right beside the lake.

They can get out of the city easily if they want and bring their home with them. The disadvantage is the cost of gas for the van.

The couple, now in their early 30s, plans to save for a few years while living in the cube van and then buy a house and start a family. But they will likely live somewhere outside of Toronto. 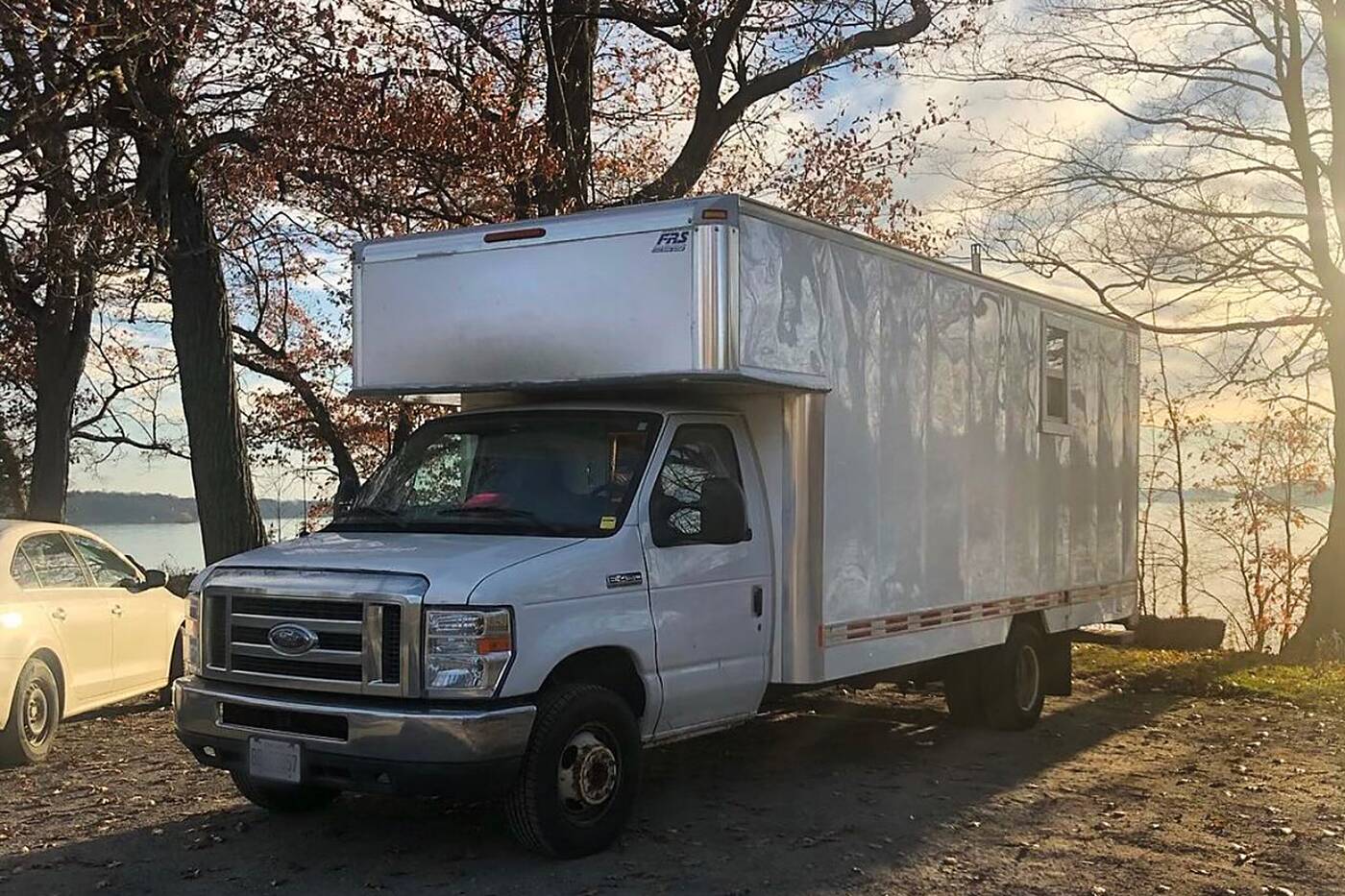 They often park the van near a lake, and have taken it out of the city.

For now, they are enjoying life in a cube van.

"The biggest benefit, besides building our own house," Hagendorn says, "is living in Toronto and not paying rent, and being able to park by the lakeshore and open the back door and you are right there."