If real estate trends over the past year have been any indication, there's nothing like a global health crisis to shake up how human populations are distributed across big cities, small towns, rural retreats and sprawling stretches of suburbia.

The COVID-19 pandemic has upended the housing market in Toronto as young professionals who can now work from home leave their tiny, expensive condos for bigger, cheaper properties elsewhere.

We've seen it in population-loss numbers, in dwindling demand for downtown micro-units, and in the stratospheric rise of home prices across GTA suburbs, but also in how much interest people have been showing in the prospect of moving away.

Toronto's lack of affordable housing options has long been driving young people out of the city, but the normalization of working-from-home has kicked things into overdrive, leaving hoardes of millennials wondering whether they should make the jump, and where to.

A comprehensive new ranking of "Canada's best communities" by Maclean's may provide some insight to those who are pondering a move, based on what they value the most. 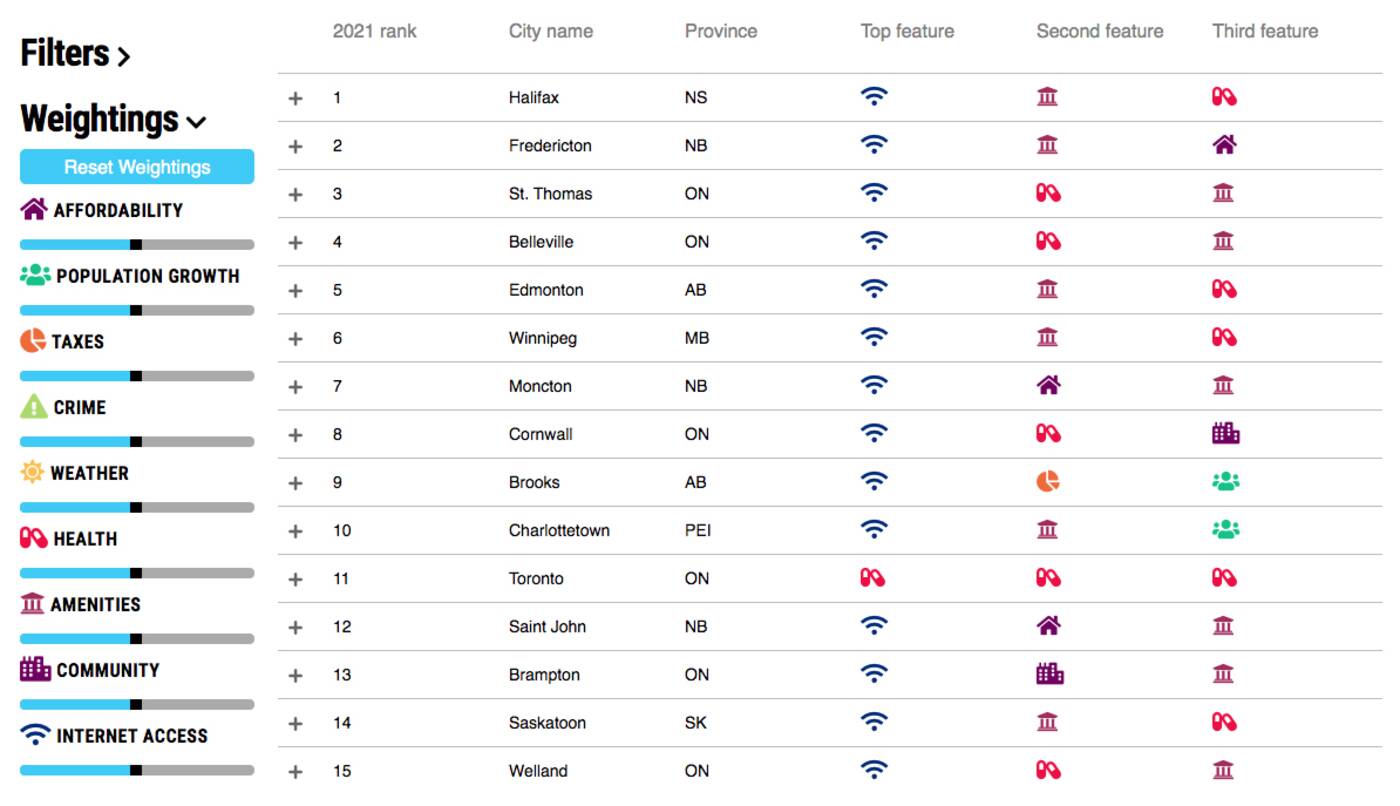 All 415 cities included in the 2021 Maclean's ranking can be reorganized by assigning different weights to different factors such as weather, crime, health, amenities, internet access and population growth.

An overall ranking in which all categories are weighted evenly puts Halifax in first place, followed by Frederiction, N.B. and then St. Thomas, Ontario.

When ranked specifically to favour housing affordability — and nothing else — Elliot Lake, Ontario comes out on top, besting all other cities on the list.

The small city of just under 11,000 people is in the Algoma District of Northern Ontario, just north of Lake Huron, halfway between Sudbury and Sault St. Marie.

According to Wikipedia, it was once known as "the uranium capital of the world" and boasts active mining, forest harvesting and glass export industries.

It's also a hot spot for retirement living and waterfront cottages, as evidenced by real estate listings for the city, which start at just $89,900 (for a two-bedroom condo.)

Just under six hours north of Toronto, Elliot Lake is known as a popular spot for active retirees. Image via ElliotLake.ca.

"Easy access to unspoiled wilderness really is at your doorstep in Elliot Lake," reads a website promoting the city. "Surrounded by pristine crown land and thousands of lakes means recreational opportunities are endless and always close by."

While stacked in terms of amenities (including a modern ski hill, cross-country ski trails, a championship 18-hole golf course and world-renowned ATV networks), Elliot Lake isn't quite so rich when it comes to factors like healthcare, with only 4 doctor's offices per 100,000 residents.

The city's crime rate remains below the national average, however, and Maclean's reports that up to 10 people in the same household are able to work or attend remote school on a single internet connection.

Most importantly for those looking for affordable housing is the "average value of primary real estate" figure listed for this community: $122,348.

You can literally buy a waterfront mansion there right now for less than an average one-bedroom condo in downtown Toronto.

Coming in at 137 out of 415 cities total in the Maclean's ranking, Elliot Lake is no St. Thomas, but it does seem like a great home for nature-lovers who enjoy extreme, trail-based action sports and want a lot of living space without a lifetime of debt.