It wasn't too long ago that people who found themselves priced out of Toronto's real estate market turned to the suburbs for affordable homes in which to raise families.

Pockets of the GTA do still exist where houses can be purchased on the cheap (or at least cheaper than in the downtown core) but Mississauga is no longer one of them.

"The Mississauga real estate market is making history – and the good kind, too," reads a new blog post from RE/MAX. "Sales activity is soaring, prices are setting records, and the dollar-value of all transactions crossed an important threshold. And we are still in the early part of 2021."

Numbers published earlier this month by the Mississauga Real Estate Board show that both sales figures and average prices were much higher in March of 2021 than they were the March previous, with a whopping 86.6 per cent more homes sold last month than in March of 2020.

With 1,411 units sales recorded through MLS, Mississauga just set a new sales record for the month of March. The board reported a total of 3,067  home sales throughout the first quarter of 2021, marking a rise of 63 per cent over the same time period in 2020.

But let's talk home prices: They're now clocking in at seven figures on average, which is new for the city of roughly 721,000 people.

Townhouses and rowhouses increased the most in value — up 27.7 per cent — over the same period of time, but remain less expensive than detached homes at a new average of $874,600. Condos in Mississsauga are now going for $611,000, up just 4.4 per cent year-over-year. 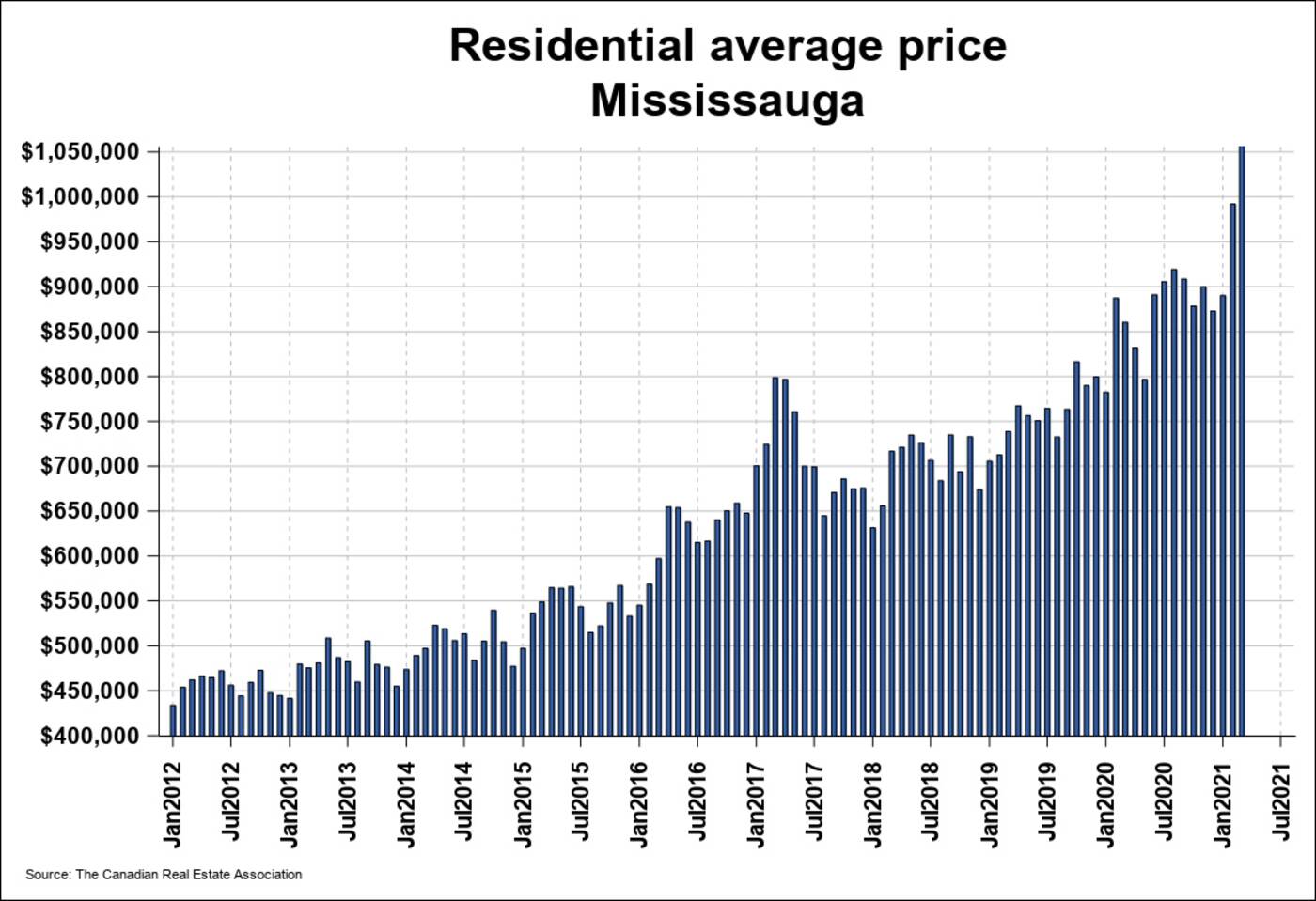 The composite benchmark price for a home in Mississauga went above $1 million for the first time in history this year. Image via Mississauga Real Estate Board.

"Over the years, the Mississauga housing market has benefited from Toronto's enormous growth. Like Vancouver and nearby regions, the impressive numbers in the Big Smoke have seeped into local areas, such as Mississauga, Oshawa and Barrie," writes RE/MAX of the record-breaking figures.

"Simply put, Toronto's gains are also everybody's gains. But unlike the 416 area, Mississauga's condominium market is beginning to bounce back, with sales and valuations on an upward trajectory."

The COVID-19 pandemic and resulting mass exodus of condo-dwellers from downtown Toronto have obviously contributed to rising home prices in the 905 region.

As for whether or not the trend will continue once the health crisis is under control remains to be seen, but some analysts predict a nationwide housing market cooldown in the the coming year.

"The federal government is beginning to tighten mortgage rules, reducing the amount of mortgage households can take on," writes RE/MAX. "Finance Minister Chrystia Freeland has indicated that she is watching regulators closely 'to inform potential steps the government may take' on the Canadian real estate market."

Whatever the government does, most realtors seem to agree that more supply is needed to meet the growing demand for detached homes across the country amid (and likely following) the pandemic.

"The data does show that the cooling measures leveraged by the federal government in 2017 certainly offered short-term relief. But these measures failed to address the core problem of supply, particularly supply of affordable housing in Canada's larger metropolitan markets," says the real estate juggernaut's EVP Christopher Alexander.

"Without helping cultivate a much healthier balance between supply and demand, all other interventions by the government will be mere band-aid remedies."