After years of sitting abandoned on Church Street, the building that once housed one of Toronto's most iconic gay nightclubs could soon transform into something far less exciting: the base of a condo.

A new 39-storey rental tower is being proposed by Fitzrovia Real Estate Inc. for 418 Church St., promising to add 319 new rental units to the area.

The new tower would sit on top of the three-storey building that the OG leather and denim bar The Barn/Stables called home for two decades. 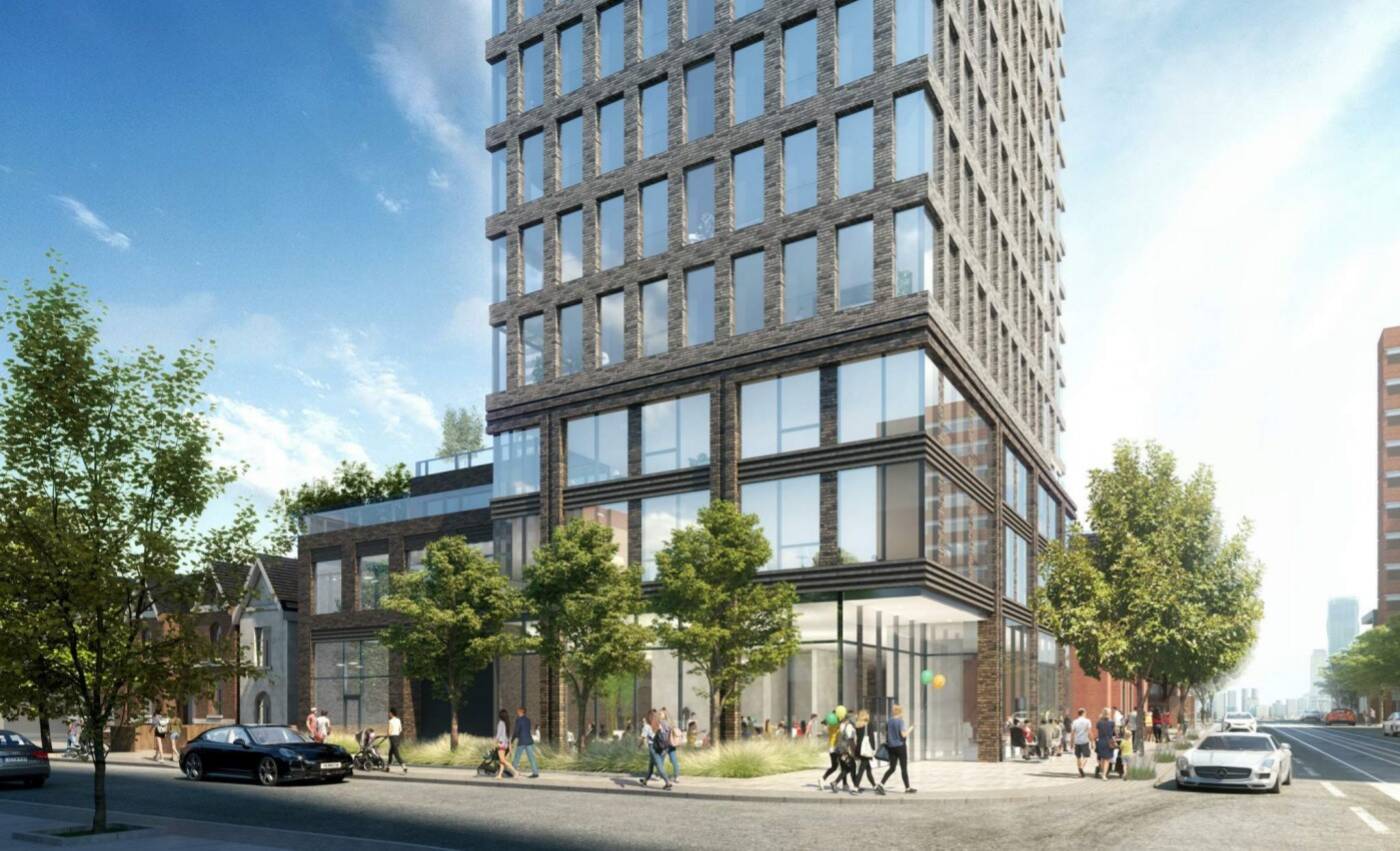 Fitzrovia is proposing a 39-storey rental tower at Church and Granby Streets. Photo by bKL Architecutre via City of Toronto submission.

Known as the "grandaddy" of Toronto's gay bar scene, The Barn rose to prominence in the 1980s, becoming one of the city's best known hubs for the gay community until the murder, still unsolved, of its owner Janko Naglic in 2004.

After shutting and re-opening in the wake of Naglic's death, the nightclub closed for good in 2012. It became a relatively lacklustre bar called Marquis of Granby for a few years in 2013.

The three-storey building—referred to as the Stephen Murphy Houses and Store—has sat empty since then, marking one of several sites awaiting transformation amidst The Village's condo boom, which been ongoing for the last decade. 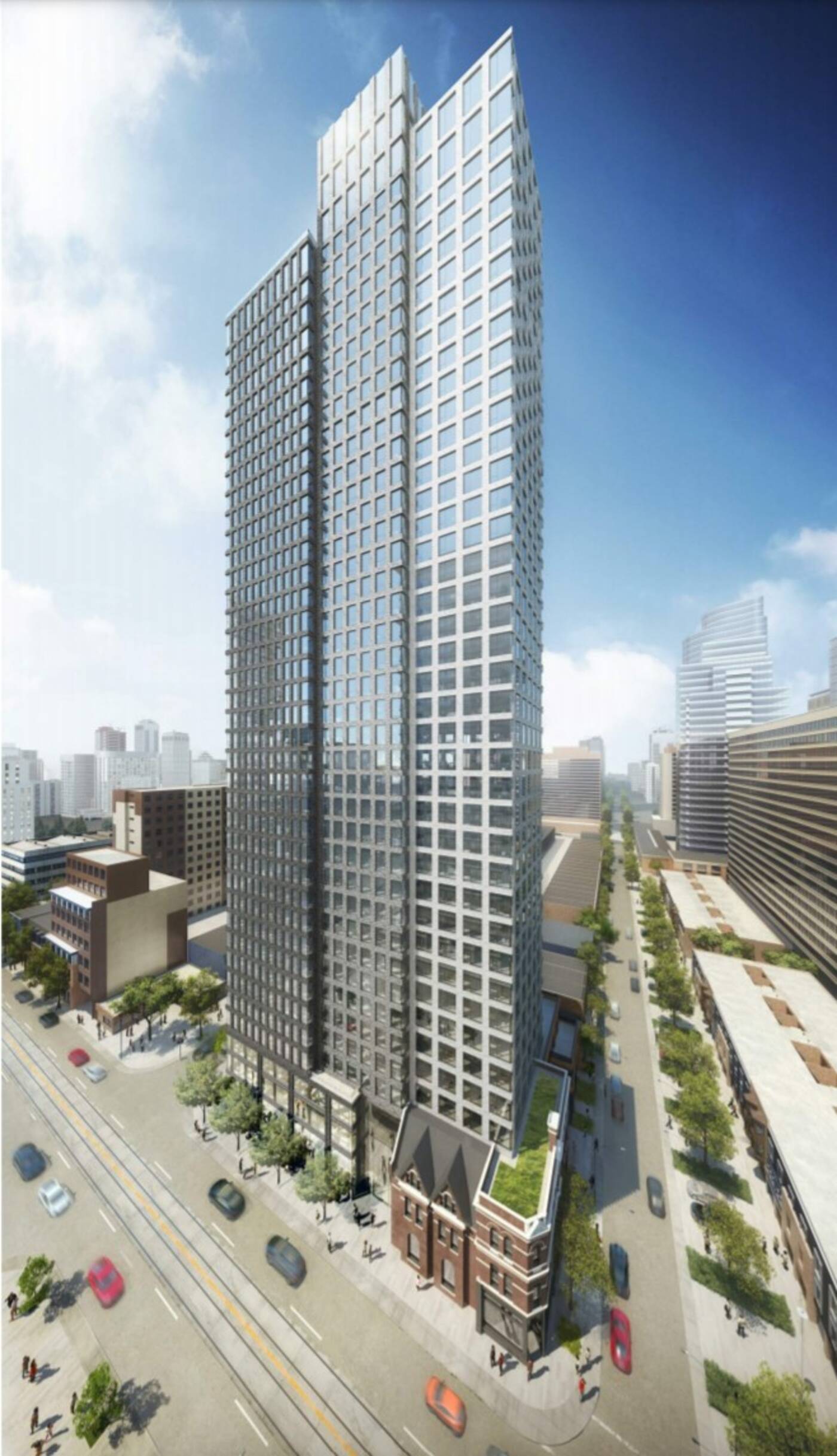 The new condo will partially sit atop the heritage building at 418 Church St. Photo by bKL Architecutre via City of Toronto submission.

Fitzrovia's proposal includes transforming the heritage building into the tower's podium, with retail on the first floor and indoor amenities on the second and third.

Meanwhile a pair of neighbouring semi-detached houses on Granby Street, which have been abandoned since 2017, will be demolished. The rental tower will also take over a commercial parking lot on site. 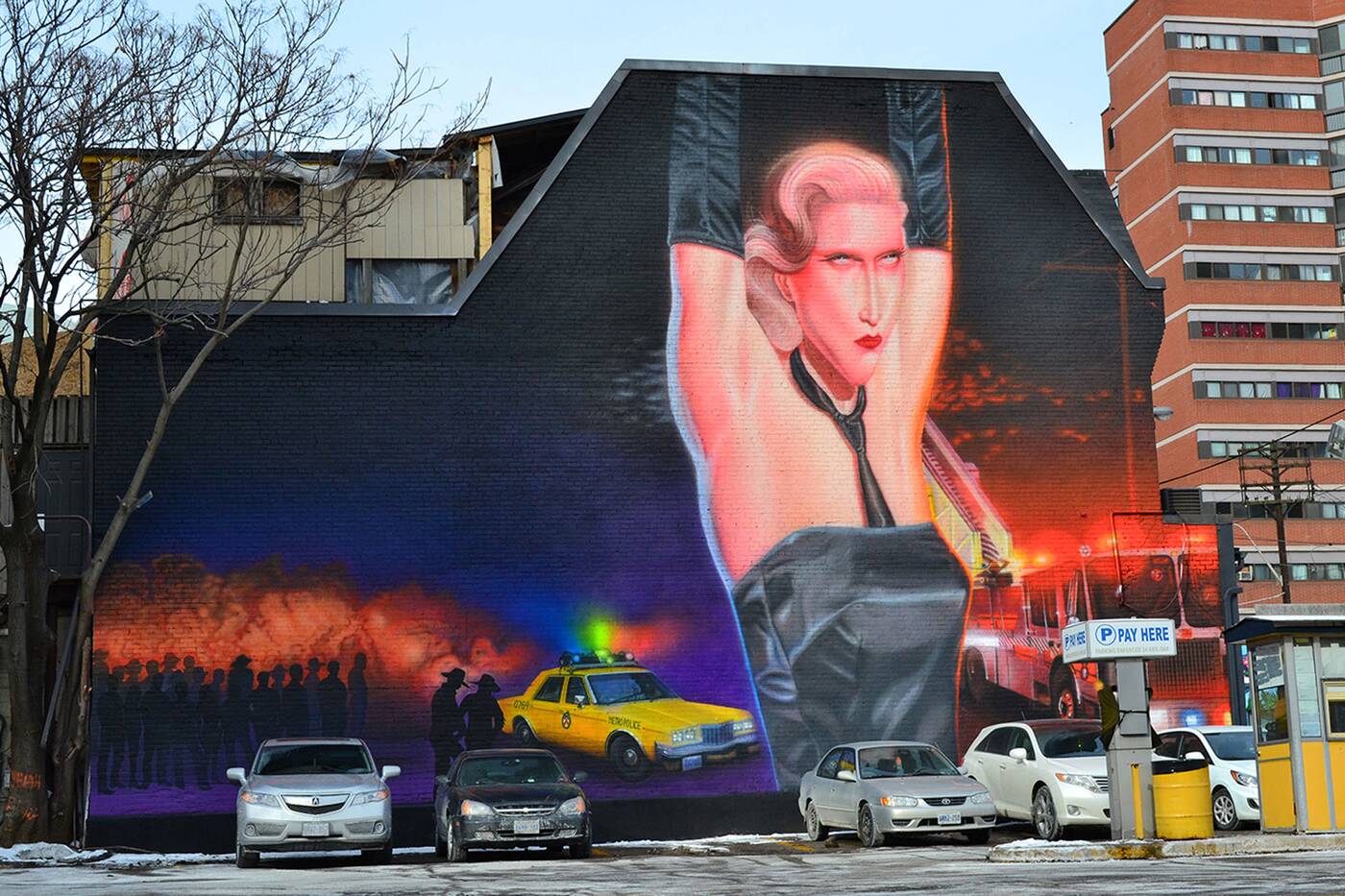 The Stephen Murphy Houses and Store were constructed in 1891, and it's the south side of the building where you'll find the 60-foot-tall mural painted by Christiano De Araujo titled The Bathhouse Raids.

Created as part of the Church Street Mural Project in 2014 for WorldPride, the mural commemorates Toronto's bathhouse raids of 1981, which resulted in public outrage and protests against police brutality.

That mural was the successor of The Barn's gay cowboy mural, a Molson Canadian classic. 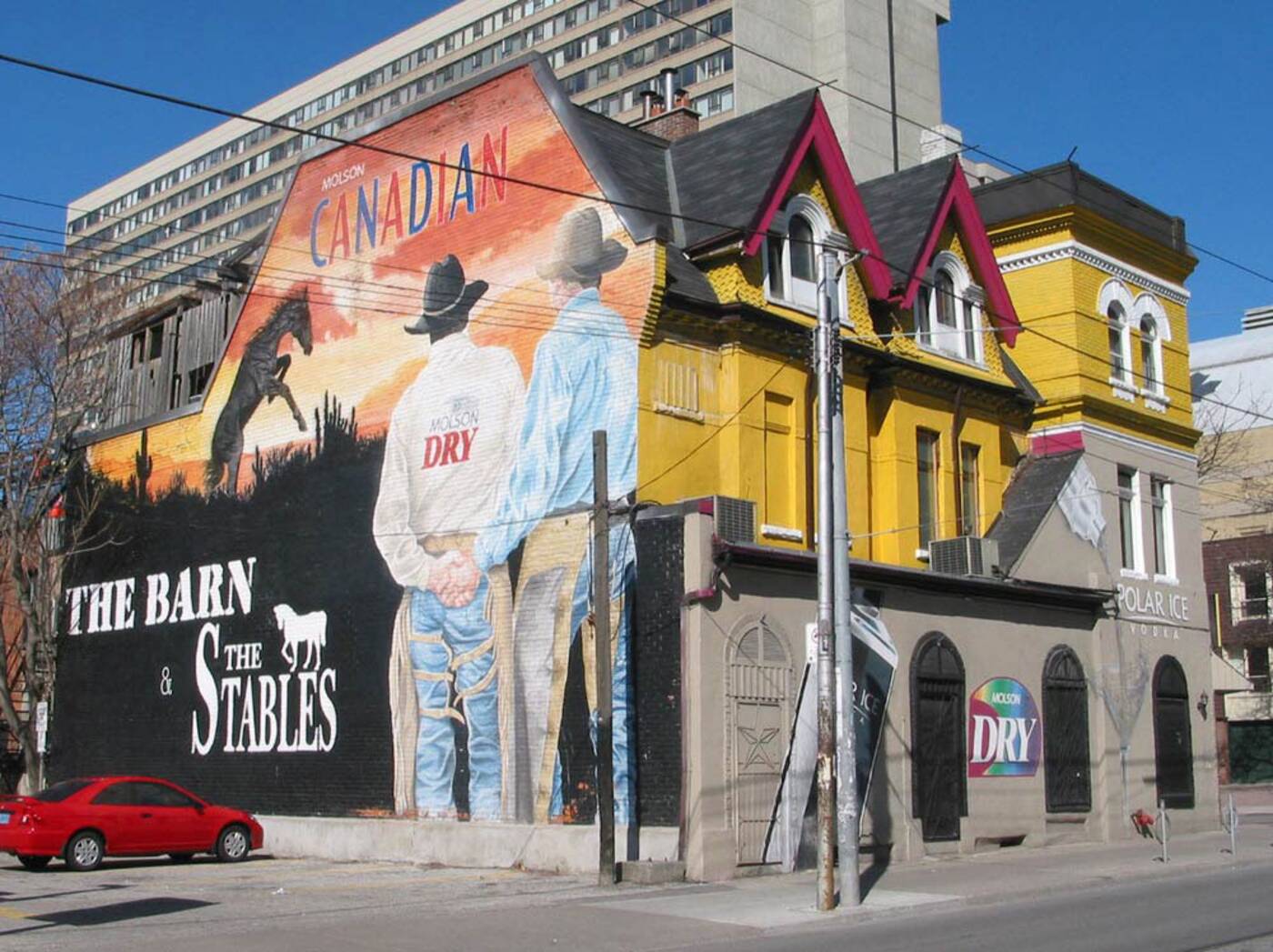 The heritage building was home to the iconic gay nightclub The Barn for decades. Photo by Bob Krawczyk via ACO Toronto.

Fitzrovia's proposal acknowledges the Village as "the LGBTQ2S centre of the city", along with The Barn's impact on Toronto's gay history. However, the Bathhouse Raids mural will not be preserved, according to the proposal.

Intensification in Toronto's gay village has sparked fears around the erasure and commercialization. 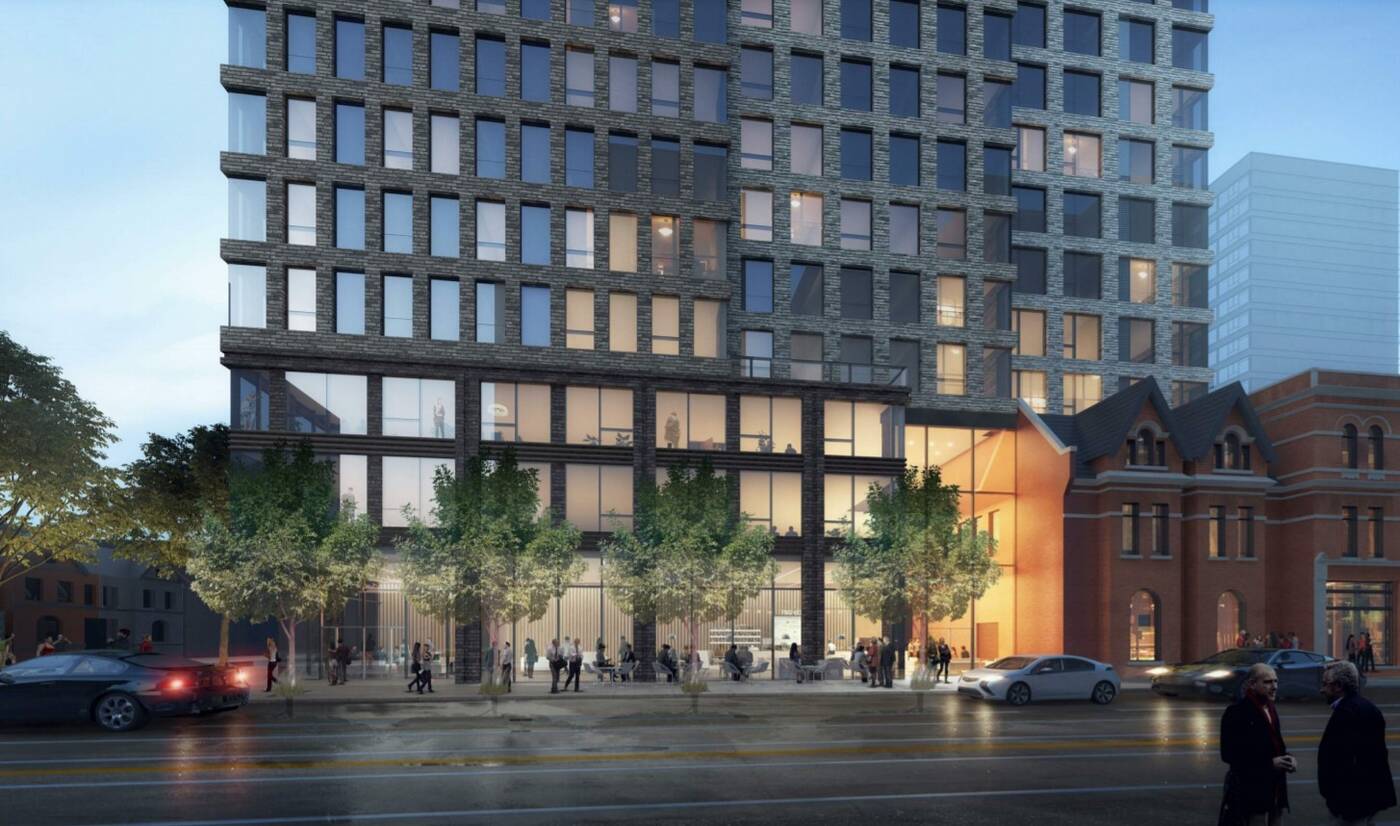 The rental tower will include 319 new rental units, mostly one- and two-bedrooms. Photo by bKL Architecture via City of Toronto submission.

Last year, news that the drag show staple Crews & Tango may become a condo complex saw more than 15,000 sign a petition to nix the project. That condo is still going ahead, but with purported intentions to incorporate the bar and club into its plans.

Meanwhile, other massive developments like the 28-storey condo Eighty One Wellesley and 2 Carlton Street's gargantuan 73-storey build are also underway.