Though the real estate market in Toronto has been characteristically on fire despite the pandemic, there's one segment that hasn't been keeping up with the continued growth in prices and sales volumes: condos.

Home prices in the city reached a new record high of $986,085 on average by the end of 2020 — climbing to more than $1.5 million for a detached house — amid a flurry of transactions, but condo prices actually dipped at points year-over-year and some buildings saw more than a 50 per cent drop in sales numbers.

This was a huge factor in driving down rent prices for 12 straight months as apartment vacancy rates skyrocketed to highs not seen for 50 years.

Though the market for condos specifically is expected to eventually pick up again later this year, the blow of new Airbnb regulations, an exodus of people from the city amid lockdown and work-from-home, and investors scrambling to sell off units they bought pre-construction is palpable.

According to the latest figures from real estate website Zoocasa, there were a shocking number of condos flooding the market by the end of last year — 3.2 to 3.4 times as many in some neighbourhoods than the same time in 2019. 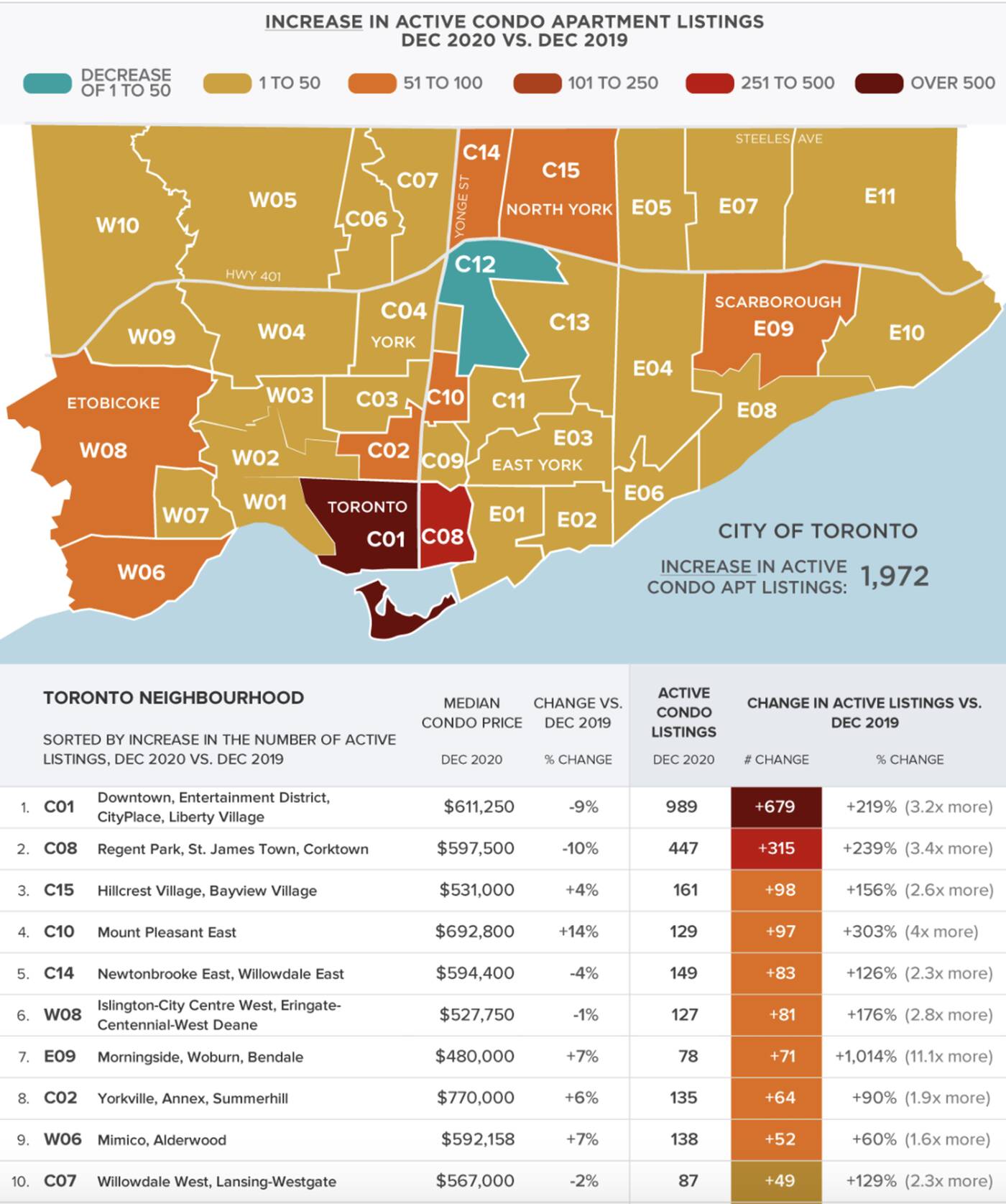 A swath of central downtown that includes the Entertainment District, CityPlace and Liberty Village had the most listings: 989 over the course of the year, which is 679 more than the year prior.

Only one region — the bougie locales of York Mills, Bridle Path and Hoggs Hollow — saw fewer condo listings than the previous year.

Out of 35 neighbourhoods, 14 saw average condo prices increase, while 21 saw them decrease, and the city as a whole saw them drop an average of 3 per cent. Overall, listings were up 172 per cent or 2.7 times more than in 2019.

"Demand for condominium apartments in condo dense cities like Toronto slowed with the average price noting a slight dip; a stark contrast to December 2019 when prices were up 10 per cent year-over-year, demand for condos was soaring, and bidding wars were common," Zoocasa states in the report.

The firm also goes on to echo other expert recommendations that anyone looking to become a condo owner or even a renter while the market is still soft should do so quickly, especially seeing as so many others are on the hunt for a bargain amid the current landscape.