A cluster of forthcoming developments at Bay and Bloor Streets — which are all at various stages of the planning and construction process — are set to render the busy downtown corner virtually unrecognizable, should they all come to fruition.

Renderings submitted to the city show what the area may look like in the near future, with the crown jewel among six other large-scale projects being an 87-storey supertall skyscraper at 1200 Bay, anchoring the new skyline. 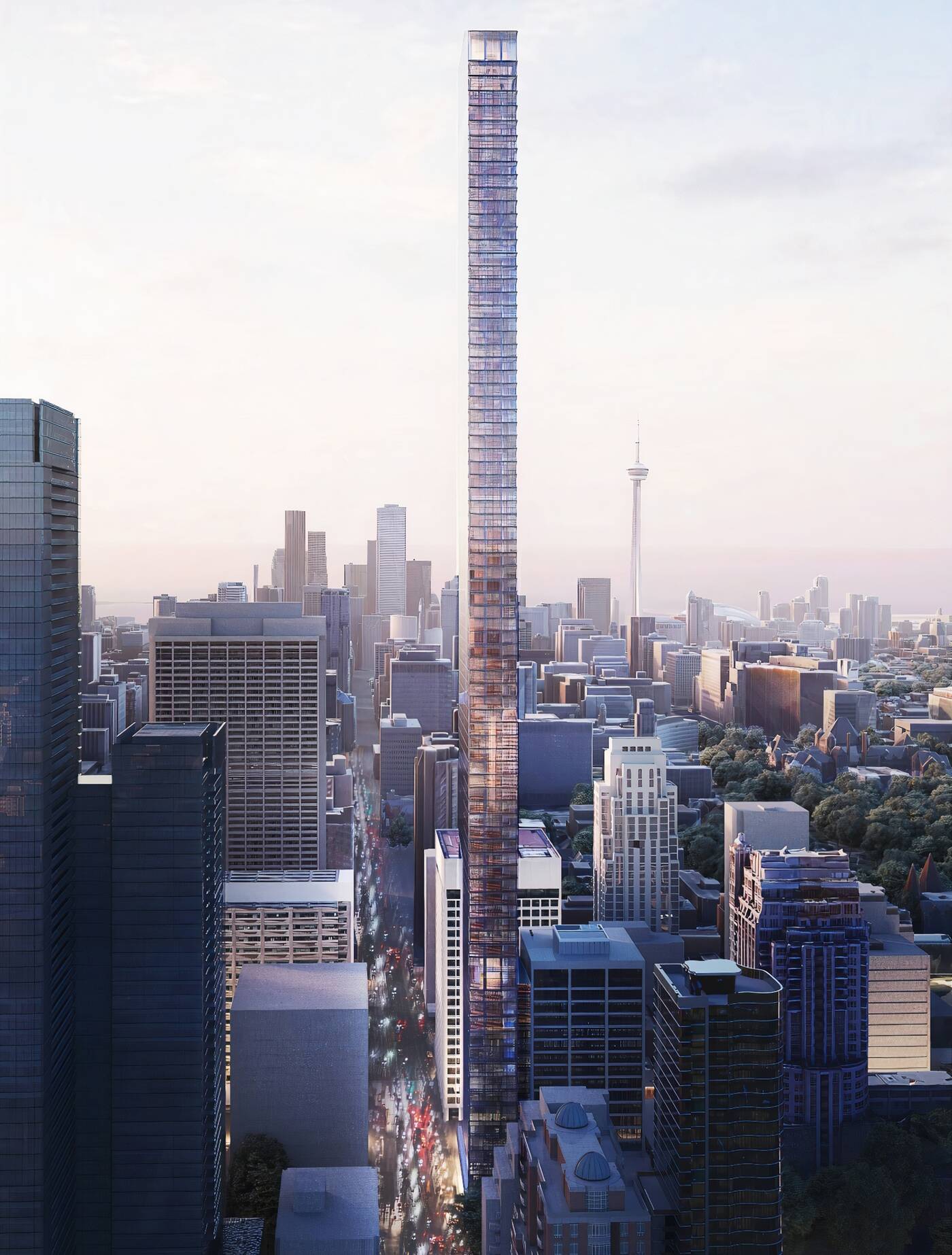 The mixed-use building would be one of the tallest in Canada, second only to the 85-storey One tower at Bloor and Yonge, just one block east. It would also be the first Canadian project from award-winning Swiss architecture firm Herzog & de Meuron.

Replacing the brutalist 12-storey office complex currently on the property, 1200 Bay would not only be the tallest, but the skinniest tower in the city at only 14 metres on some floors.

Its 54,900 square metres of space would be used for office and residential, with two floors of retail, and design flourishes like timber shutters built in between two panes to control light, heat and privacy. 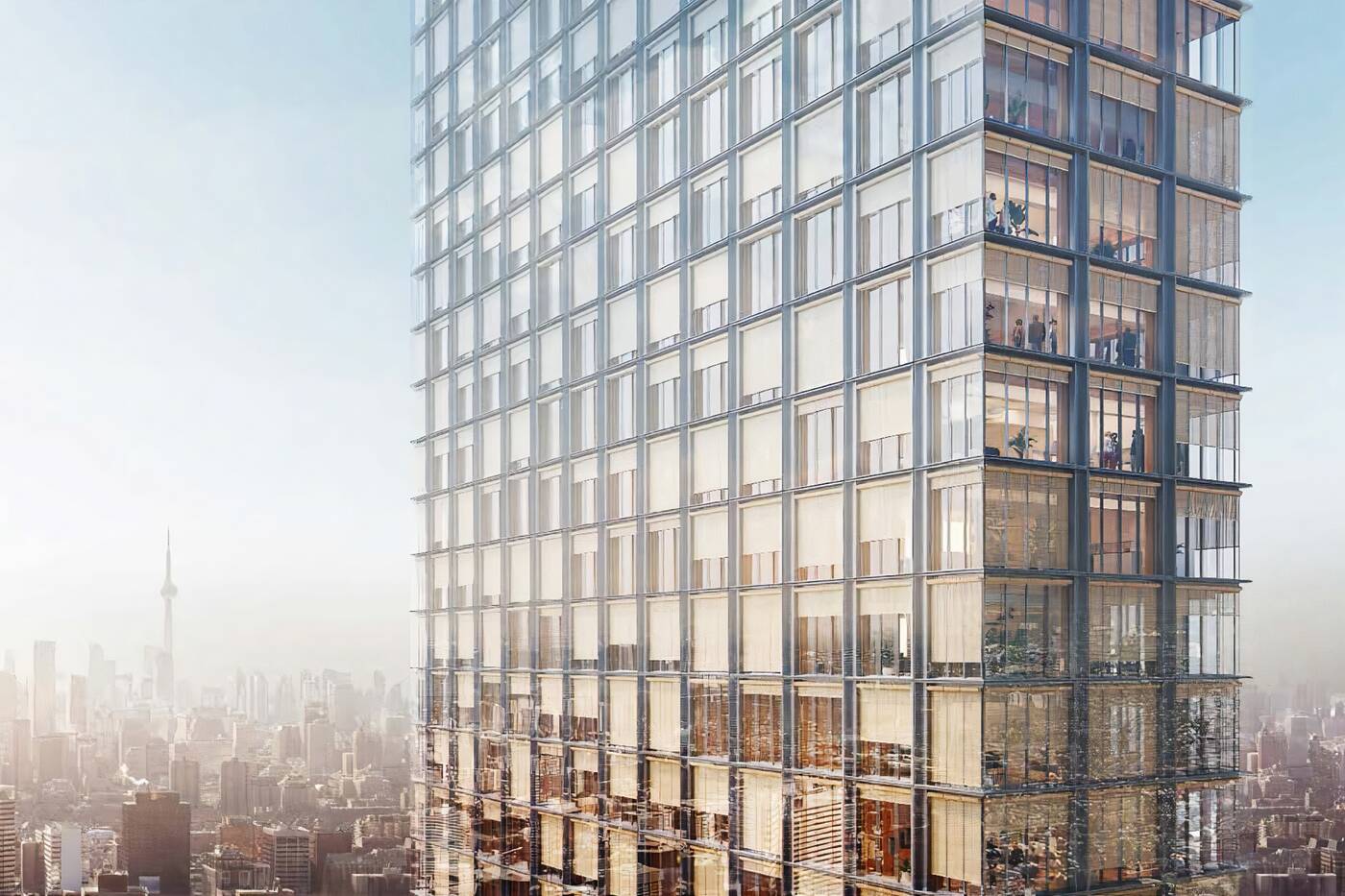 Prospective buyers would be looking at one of the 332 condos on floors 19-84, which are comprised of 140 one-bedroom units, 120 two-bedrooms and 72 three-bedrooms — eight of which are bougie 2,800 square foot penthouse residences.

Offices are slated for floors three to 15, while the top three floors of the building would be reserved for a full restaurant and rentable event space offering unparallelled views of the city to residents and the public alike. 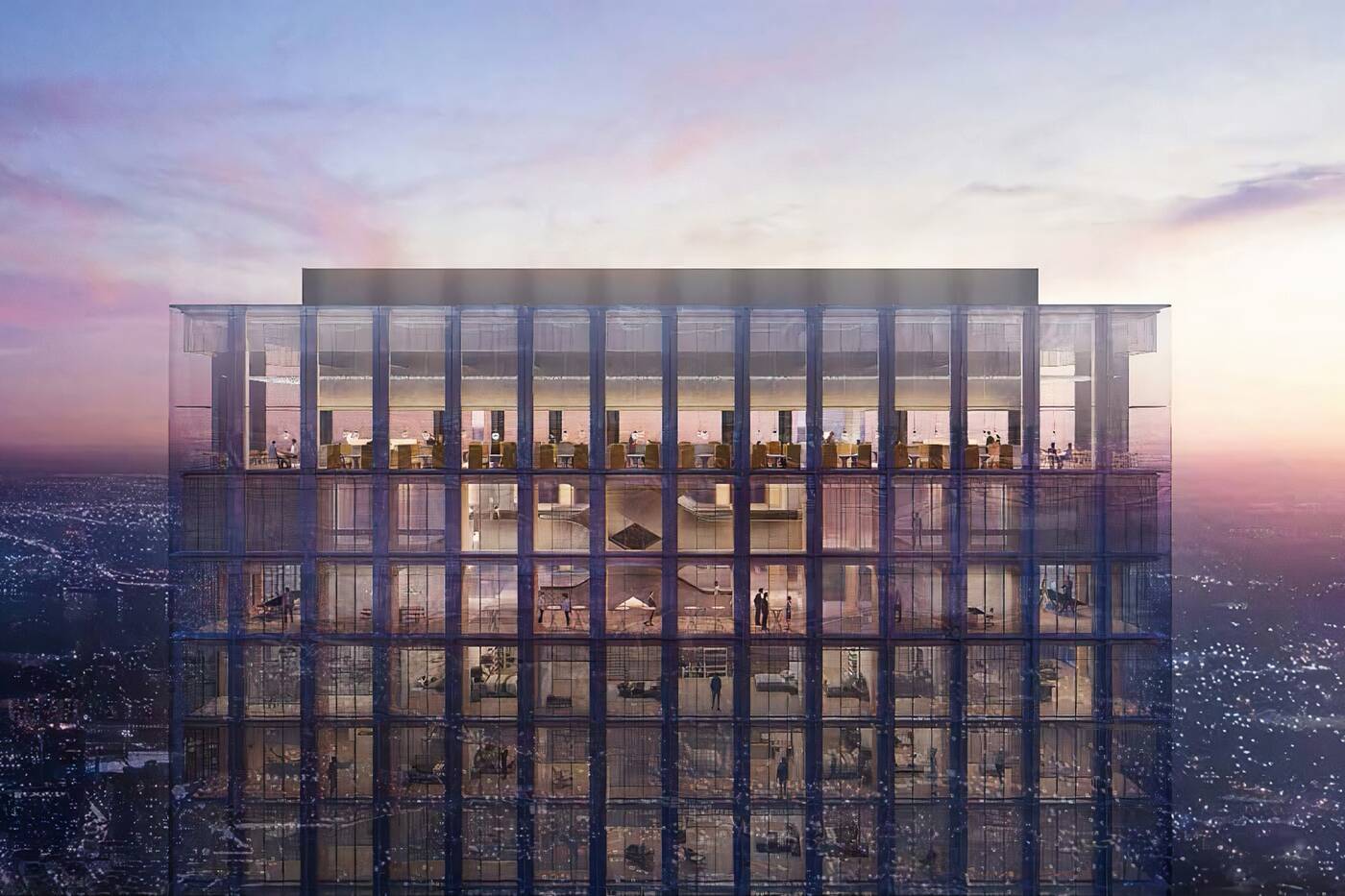 Among 1200 Bay's other offerings are a pool and other fitness facilities that span two levels, a connection to the Bay subway station and potentially the PATH, and absolutely no parking spots (the way of the future), though there would be space for bikes and storage lockers in a four-floor basement.

Along with the plans for the structure itself, Herzog, along with developers Kroonenberg Group and ProWinko, also proposed a reimagination of the surrounding area — including other forthcoming developments — in a "Block Plan." 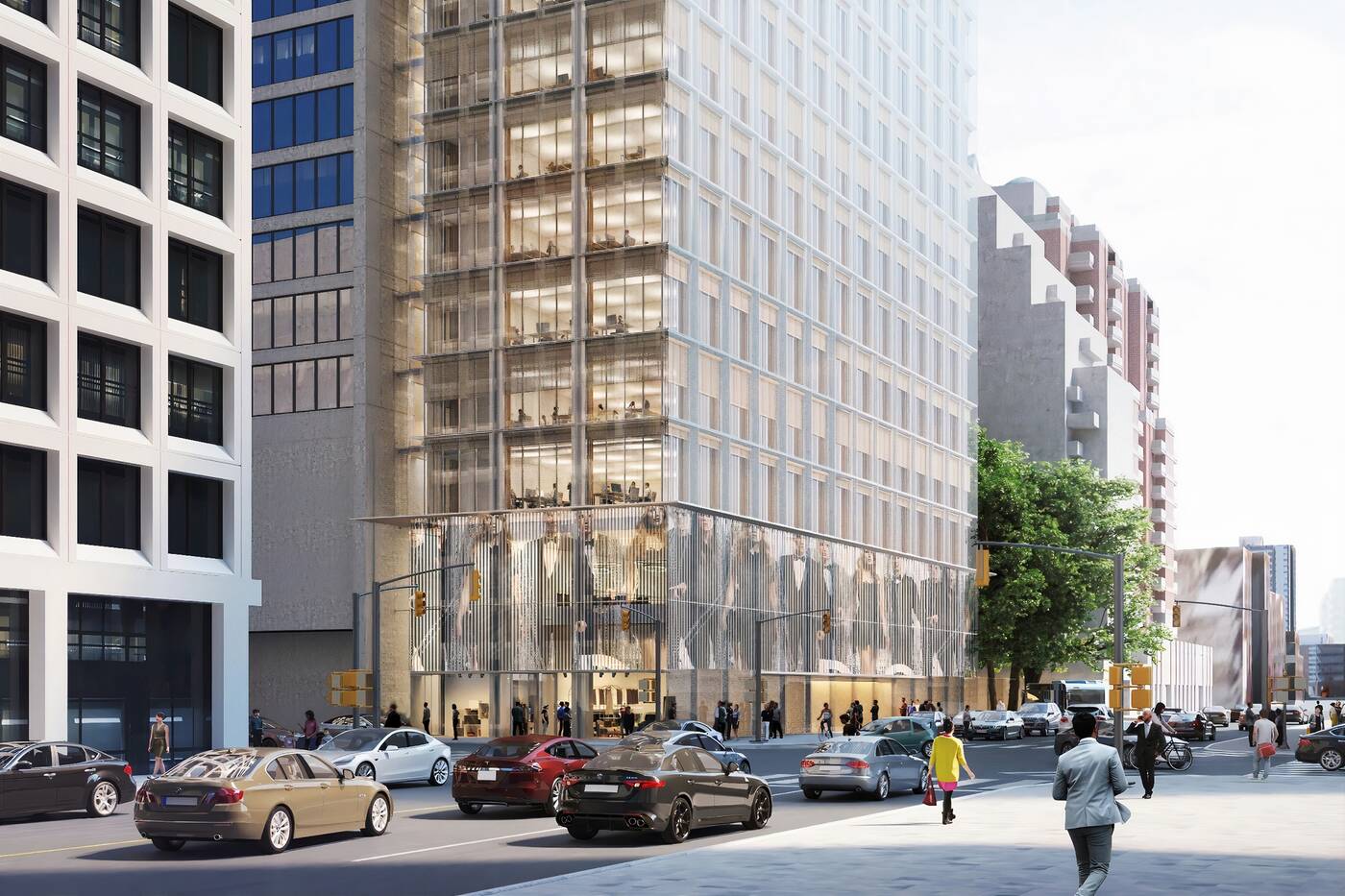 The plan would see amendments to the design of the neighbouring 80 Bloor project so that the two staggeringly tall buildings are not within such close proximity to one another (the current design plan for 80 Bloor leaves it just 15 metres from 1200 Bay due to its shape) and are connected underground, though it does not seem that the team behind the other building has been consulted.

There is also an intent to fabricate some new public pedestrian and green space surrounding the buildings, including a walkway connecting Yorkville's Critchley Lane to Bloor Street. 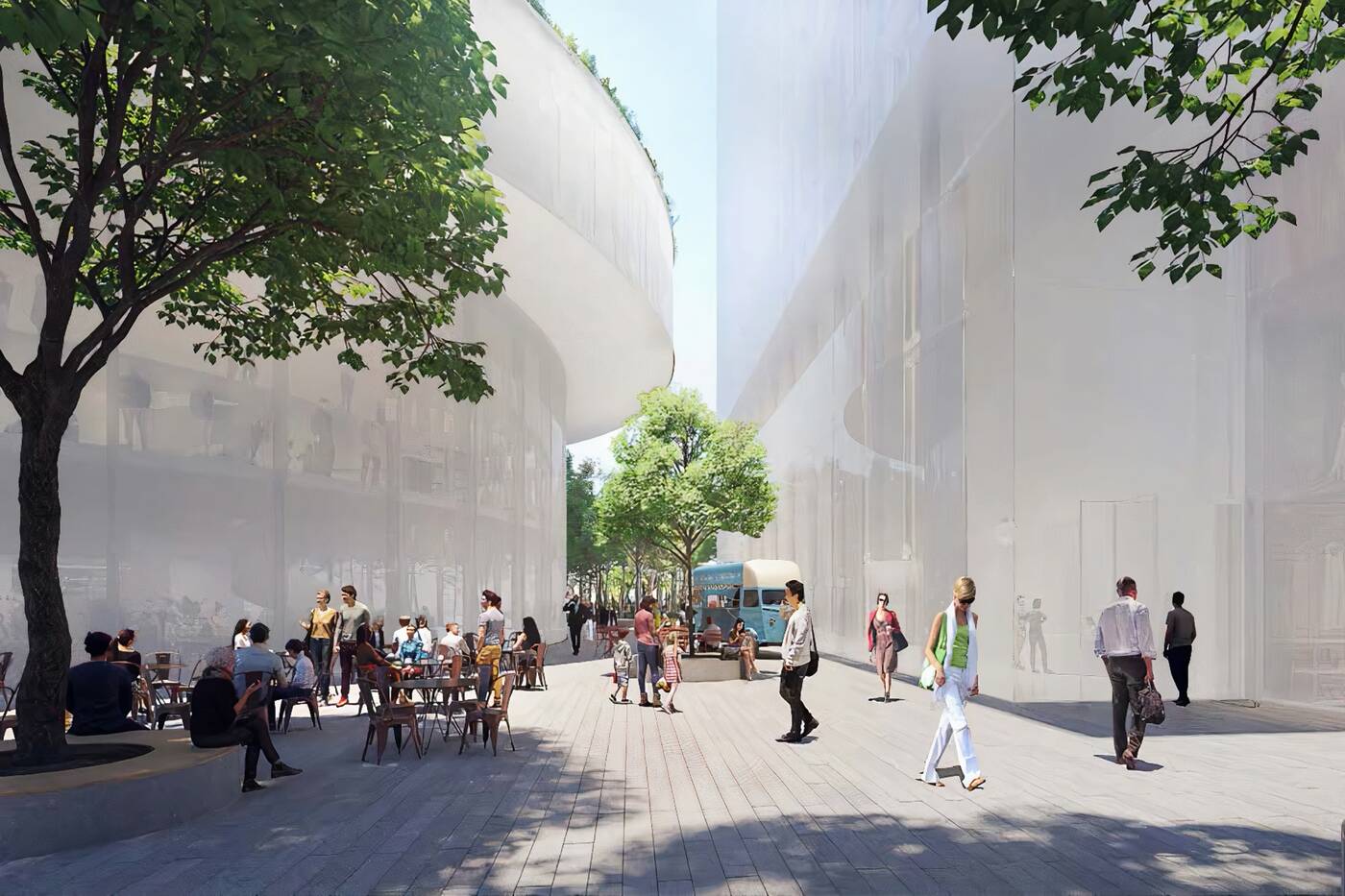 The developers seem to be making the most use of the small lot at 1200 Bay as possible, and it's as if they know exactly what Toronto does not need right now: more overpriced highrise condos.

Residents will have to wait and see which of the many current proposals for the area actually go forward, and how they end up shaping the city.